hot in the city

Innovation studio Framlab proposes ‘Oversky,’ a passive new type of infrastructure which aims to combat extreme urban heat waves. The solution is indeed sculptural and avante-garde, but has been developed through an in-depth investigation into the urban heat island phenomenon and the behavior of clouds.

In unveiling its Oversky proposal, the team notes the critical reality of rising temperatures in cities, which are heating up ‘nearly twice the global average rate.’ These heat waves of course come hand-in-hand with an increase in cooling systems, especially air conditioners, which currently account for 10 percent of global greenhouse gas emissions (see here). 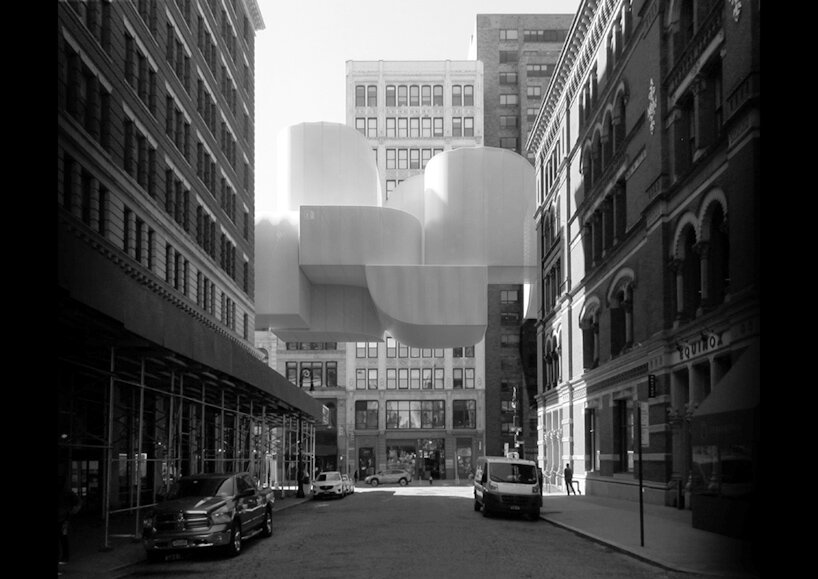 the cool intervention: how it works

Through this Oversky design research project, Framlab (see more here) proposes a new urban infrastructure of passive technologies to cool the warming cities. The team describes the project as a floating, modular system which targets the areas responsible for the heat island phenomenon — namely road networks and parking lots — to passively cool the neighborhood and reduce the need for AC units.

These clustered, cloud-like structures create shaded microclimates by reflecting heat from the sun. The architects elaborate: ‘The coating of the modules makes use of a technique called radiative cooling. Through nanophotonic engineering, a foam-like material structure with nanoscale air pockets is designed to reflect sunlight and radiation in a narrow band of the light spectrum.

‘The wavelengths of this band correspond to a ‘transmission window’ in the atmosphere, allowing heat to escape into outer space and cool down the surface to below its surrounding temperature, even in full sunlight.’ 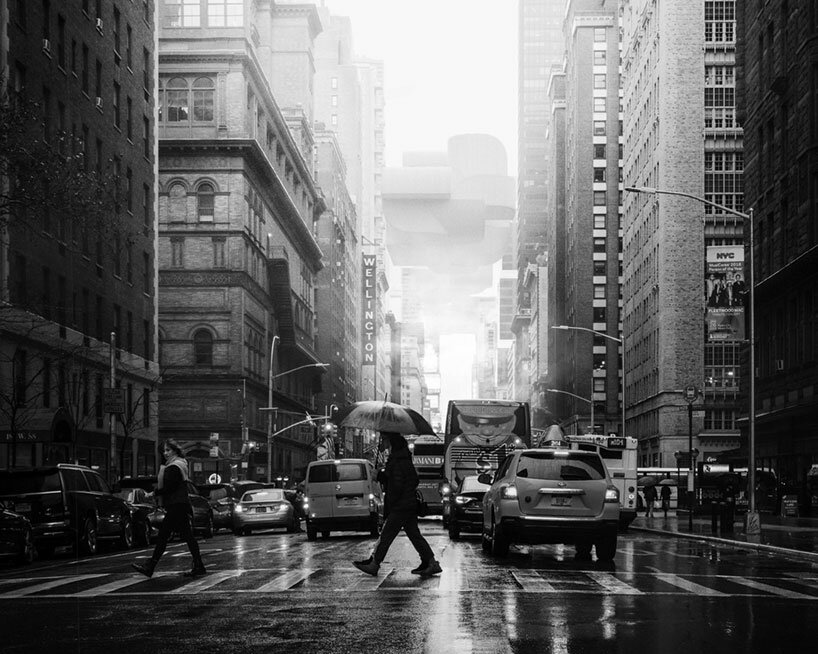 The team at Framlab continues, describing the clustered clouds of its Oversky proposal: ‘A team of researchers have demonstrated that panels placed under direct sunlight remained 4.9 degrees C (41 degrees F) below air temperature, providing a ‘cooling power of 40.1 watts per square meter.’

The geometry of the structure is designed to channel and collect rain water. With the use of a hydronic radiant cooling system, the water gets circulated through a network of thin pipes running underneath the skin, cooling down its interior and — through the integration with existing cooling infrastructure — neighboring buildings. Water is also released as fine mist on the underside of the structure, enabling the cloud to remove additional heat from the street environment through evaporative cooling.

‘In addition, the use of a titanium dioxide coating enables the outer surface to clean the air through the break-down of airborne pollutants. The geometry of the underside of the cloud is designed to combat a different kind of pollution, as it absorbs noise from the traffic below.’ 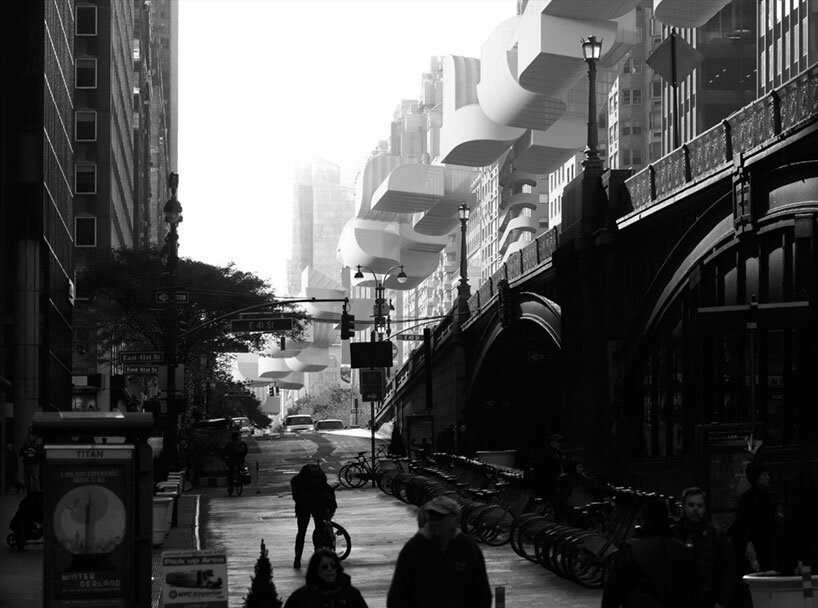 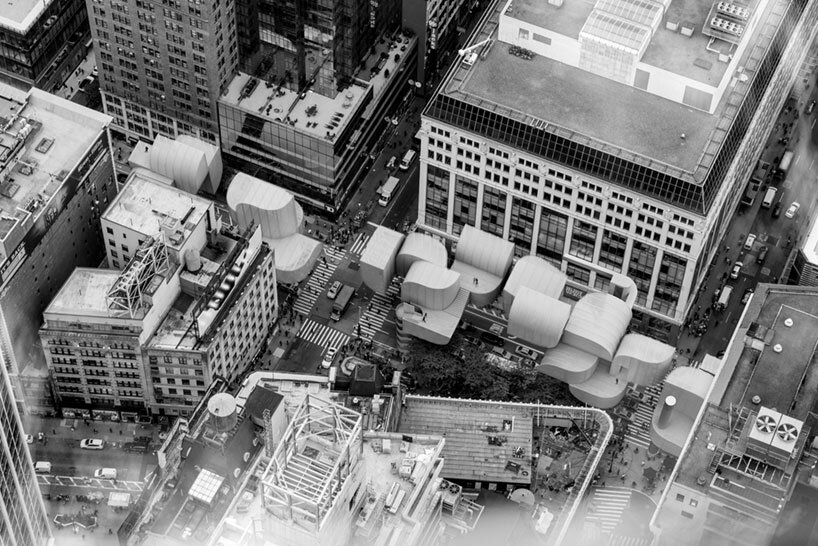 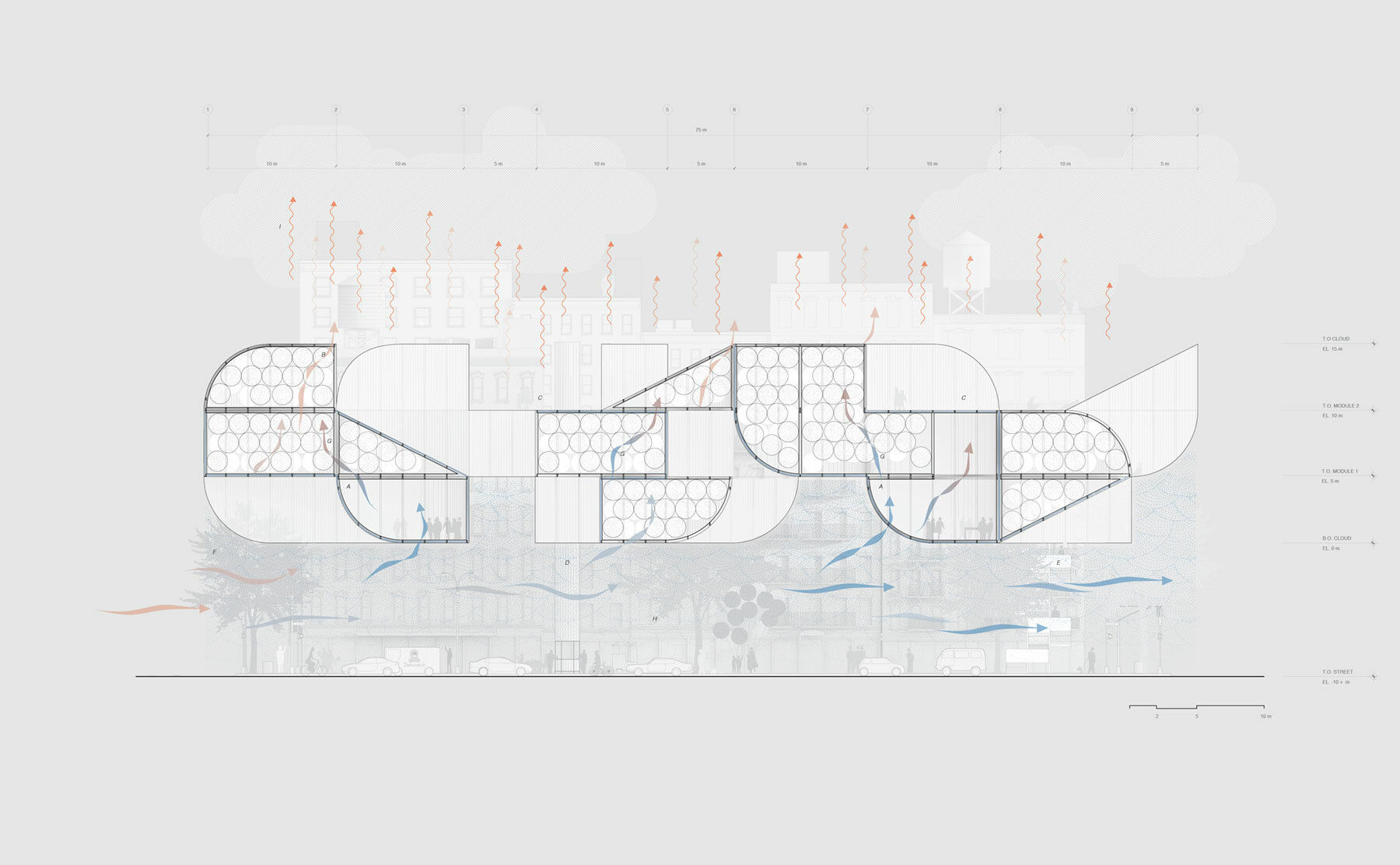 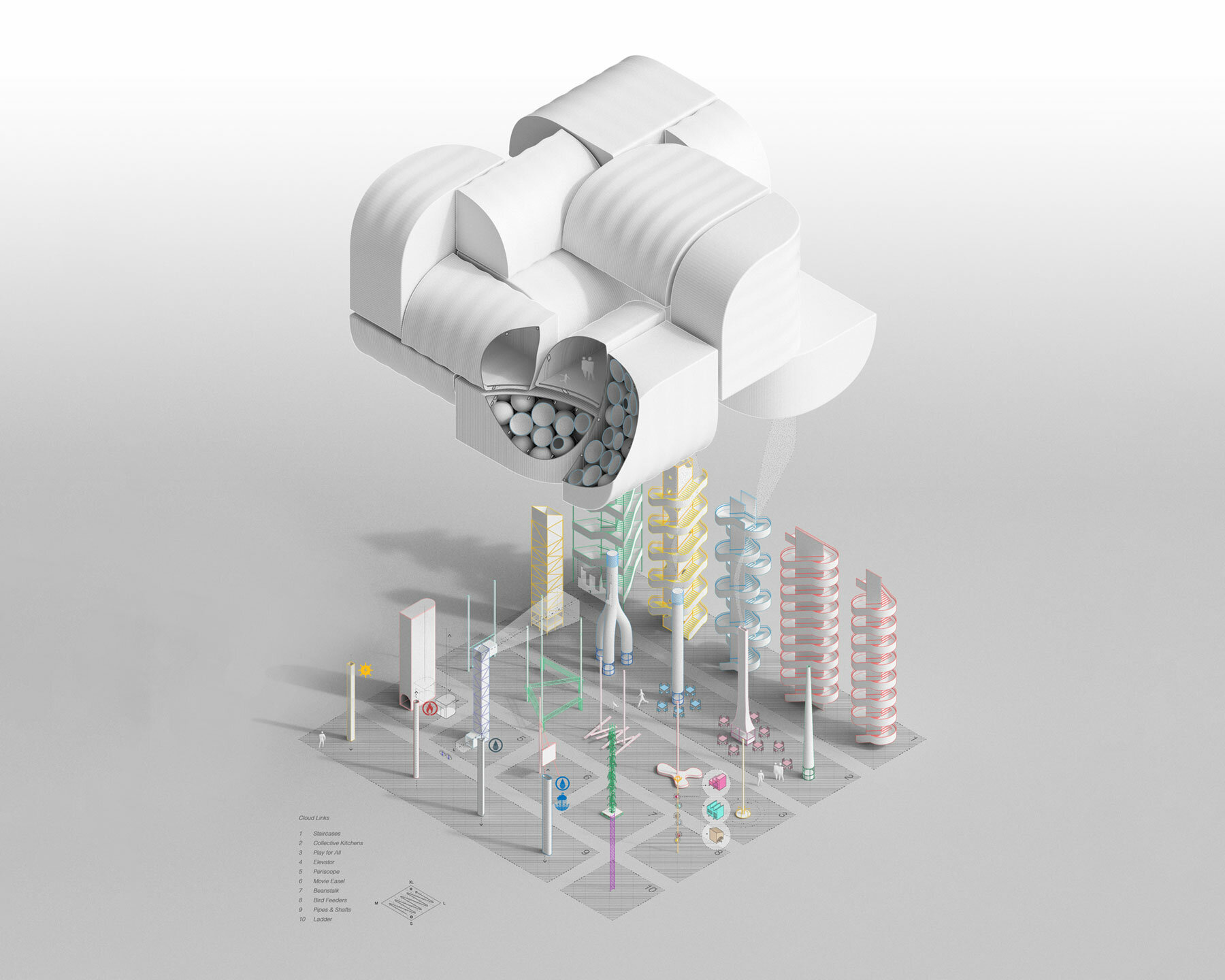 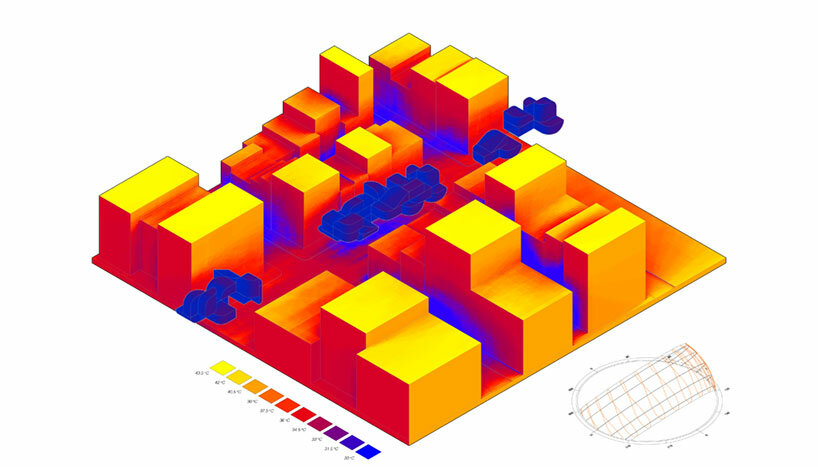 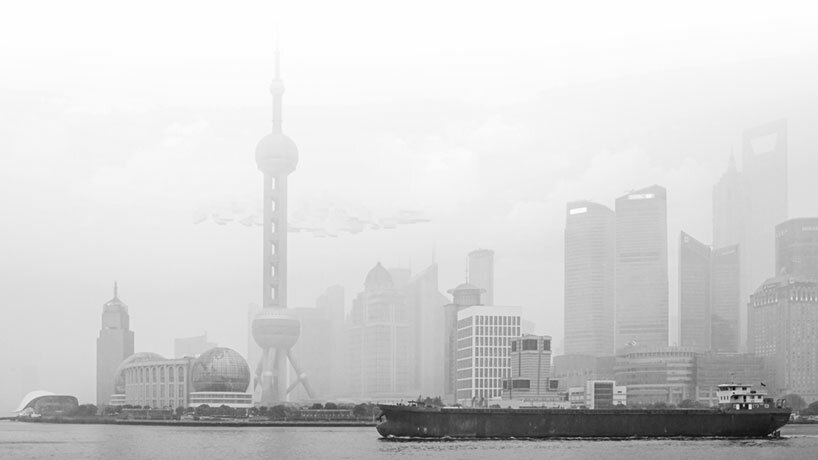 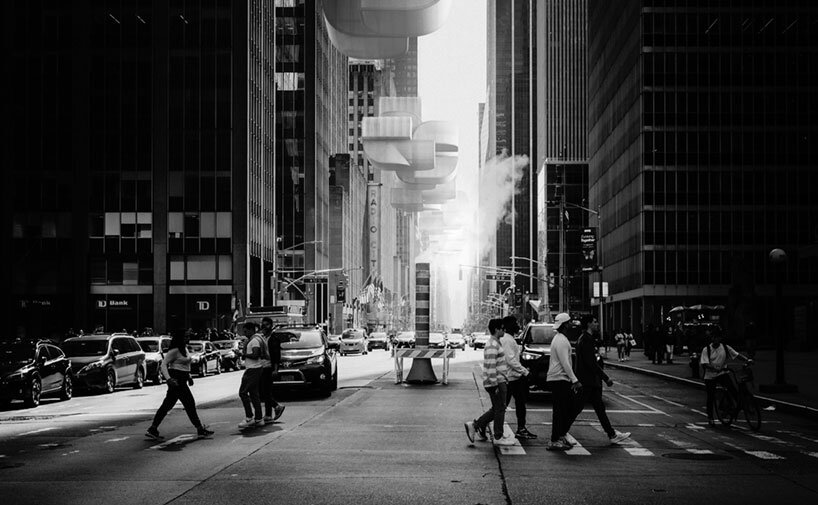 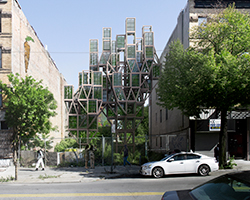 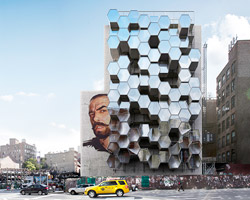