30 years after mecanoo was officially founded in 1984, the dutch firm is now considered a leading international practice, working on a wide range of high profile projects around the world. the company is guided by its original founding architect and creative director, francine houben, who leads a team of 120 creative professionals from 25 different countries. mecanoo has been widely praised for creating buildings with real cultural significance, infused with a constant humanist touch that pervades their expanding catalogue of work.

to celebrate the studio’s 30 year anniversary, designboom spoke at length with francine houben, who detailed the firm’s origins, her personal views on contemporary design and what the future has in store for the practice. 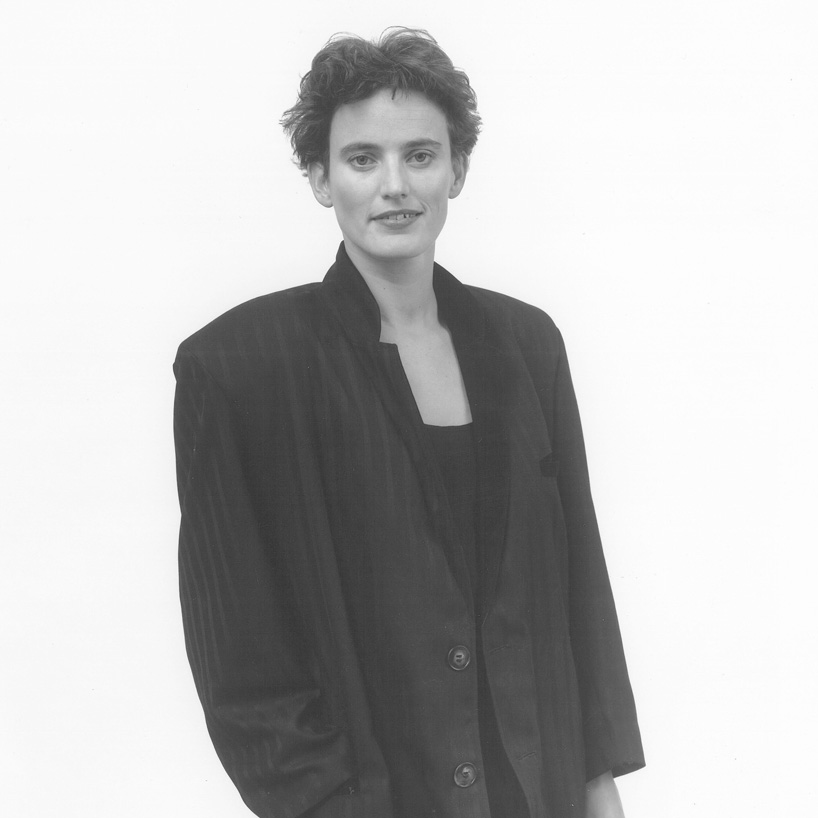 francine houben: when I was young we moved house a lot, which I really enjoyed. new houses meant new surroundings, new worlds. I never missed the previous house because there was too much to be excited about it in the new one.

I fell into architecture very organically. in fact, I can pinpoint the moment when I wanted to become an architect exactly. in 1974 my older brother took me to see the maquette hall of the architecture building at TU delft, where he was studying at the time. as I entered I instinctively knew that I wanted to become an architect. since then, I’ve always had a strong desire to combine the human, technical and aesthetic aspects of the discipline in an unorthodox way. for me it’s a way of contributing to a better world. practicing architecture gives me the opportunity to do all of that.

when we were still students, in 1979, there was a residential competition at kruisplein in rotterdam which I entered with two others. we won that competition in 1980 and the next four years we worked on it as students. our quest was for urban renewal of housing and the architectural innovation that goes with it. following years of neglect, social housing was the topic of the moment and we were right at the heart of the matter.

I think it’s right to say that mecanoo has always been connected to, or indeed part of, the particular agenda of the time. right now, we’re investing a lot in large scale public buildings (such as libraries) but we have not forgotten our origins in housing. we have never stopped designing dwellings. 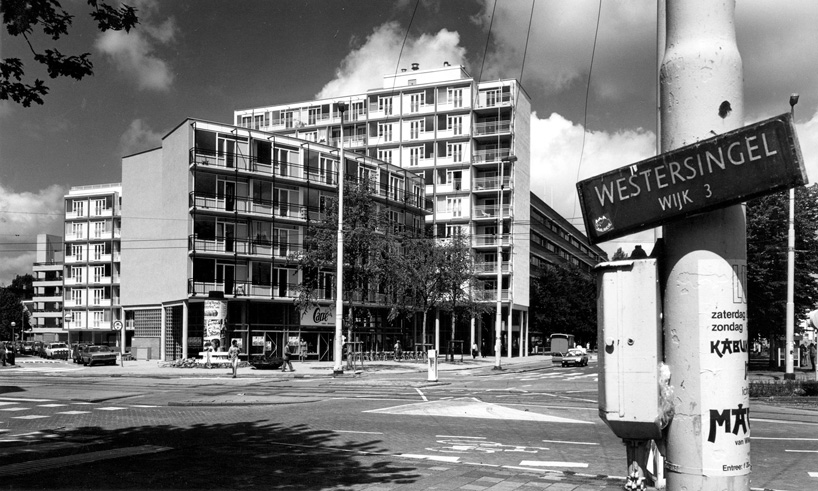 FH: at TU delft I was formally taught in the modernist language. at that time, the architecture faculty was dominated by the legacy of modernism, with architects such as jaap bakema and aldo van eyck teaching. the netherlands of course had famously cultivated de stijl in the 1920s. the rationalist agenda set the tone for my education, though we always explored other ways of designing. we later returned and built a library for the university which embodied all the ideas we had challenged whilst studying. it now sits opposite the brutalist auditorium at the centre of the campus. 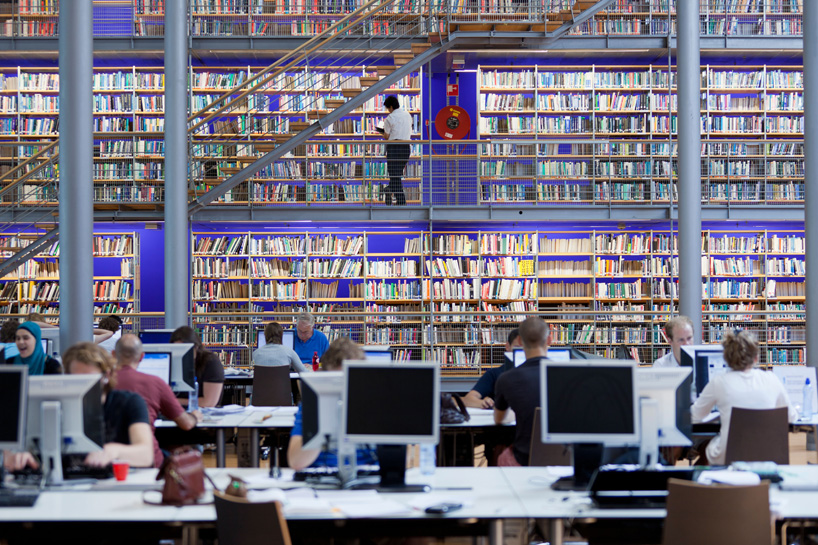 FH (continued): mecanoo has evolved an approach to architecture that’s not in any way modernist. we take an independent position. we do not work dogmatically because we enjoy the fun in finding the best solution to a given problem. you could say that we work in layers, where technical, human and playful aspects of architectural practice are unified. our practice is not just about housing functions. unlike the modernist mind set, our projects are always designed to absorb unpredictable change.

the question of intuition is also important for me. in architecture you can try to describe and analyse everything but a lot of it is just down to your instincts and feelings. in the work of david hockney, for example, I sense a kind of optimism and freedom. he has the courage to experiment. in architecture, this attitude is vital. it ultimately becomes a source of energy and stamina. notions like emotion and aesthetics are difficult to express in words. there is still a prevalent dogma that aesthetics has no function. designing by intuition whilst acknowledging analysis is so important.

FH: max risselada, my oude meester at TU delft, was a big influence. his seminal text raumplan versus plan libre was an early inspiration. he also introduced me to charles and ray eames, who I first visited in california in 1978 – the year of charles’ death. over the next ten years I regularly visited ray at their home in california’s pacific palisades. I was so inspired by their free way of working.

japan has also been a constant inspiration which began just after I graduated as an architect. I won a travel scholarship to visit and when there I spent time with toyo ito and kazuyo sejima, ten years before SANAA was founded. I immersed myself in the culture and I go back as often as I can. 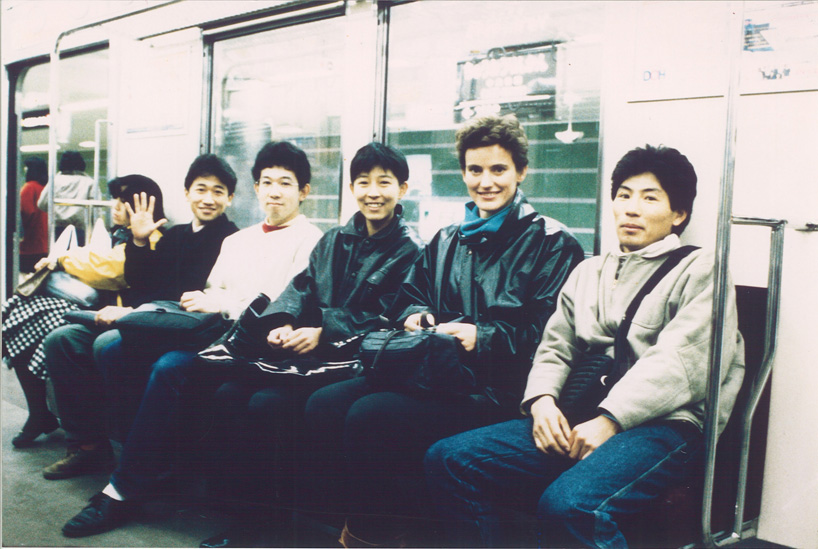 FH: mecanoo – which I describe as my symphony orchestra – is multidisciplinary. we are built by architects, interior architects, engineers, urbanists, landscape architects, technicians, model makers, film journalists – the list goes on. it’s also a very mixed society: 40% are female, partly very young, and comprising of people from across the world. at the same time, we are also very dutch! we find it easier to understand clients and context (people and place) because we have mecanoos in the team who lived there: taiwan, korea, spain, portugal, the UK, to name a few.

most importantly, however, is the fact that each of our buildings are very different. when people ask me why this is, I always answer: because mecanoo does not have a form-based approach. even though our designs don’t have the same aesthetic, the thread which ties them all together is that they are all designed with the same attitude: people, place, purpose. we observe people in different cities, in different climates, and from different cultures. we are searching to create identity in a world of globalisation, especially when designing public buildings and public space. 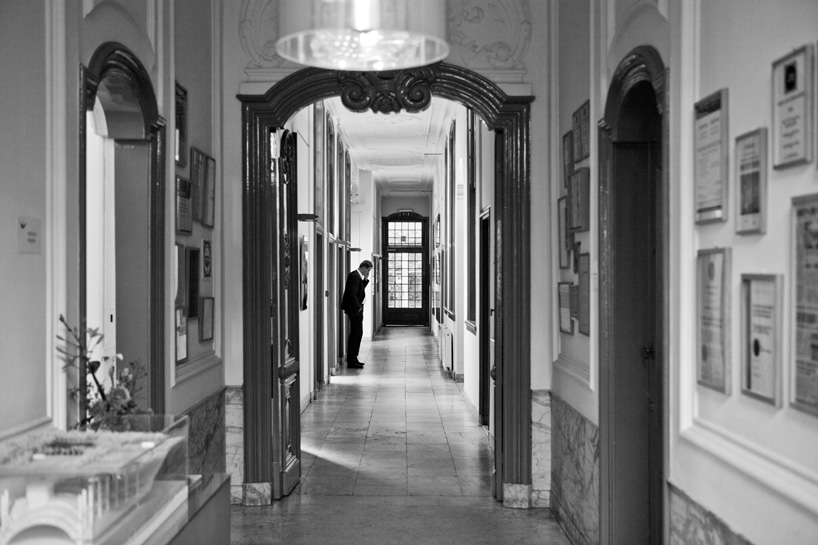 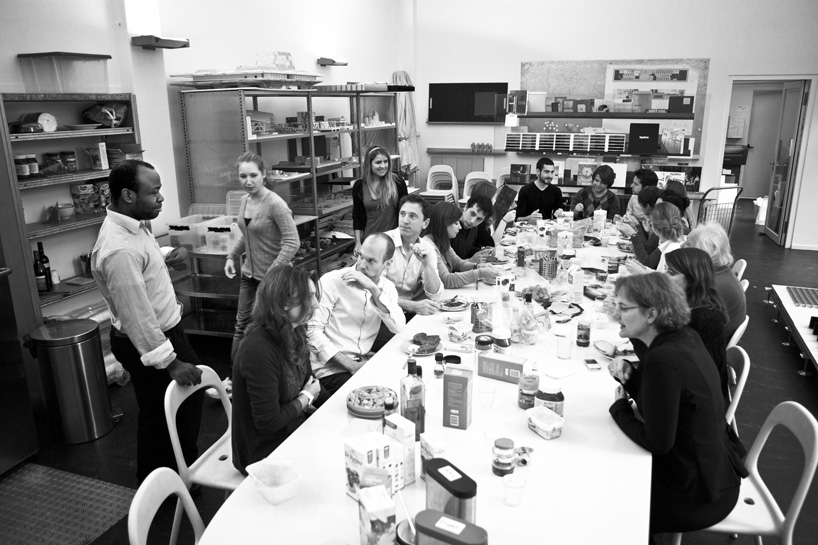 FH: yes! you can’t rely on google earth, render engines and photoshop. sketching on site and capturing the essence of a place is so important. model making has always played a really important role at mecanoo also. although 3D modelling and BIM are important steps in the process of a project, sketching by hand is a skill that is closer to your heart. 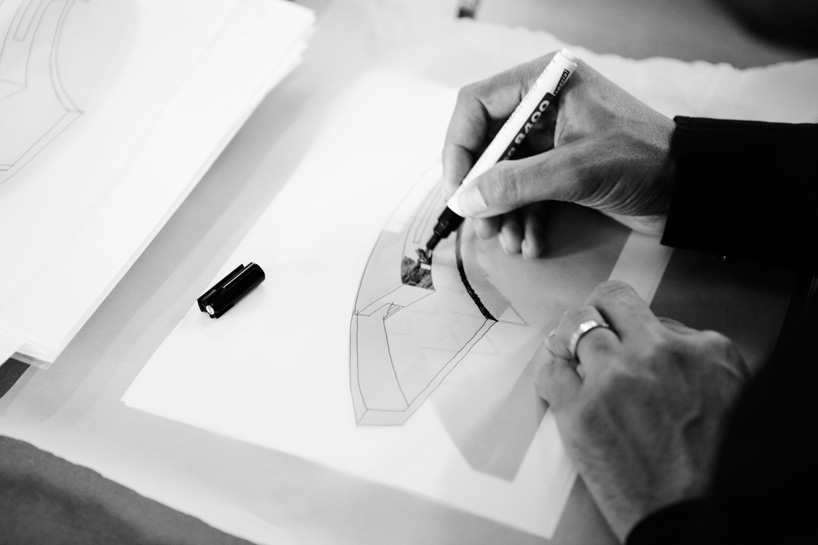 the importance of sketching by hand
image © harry cock 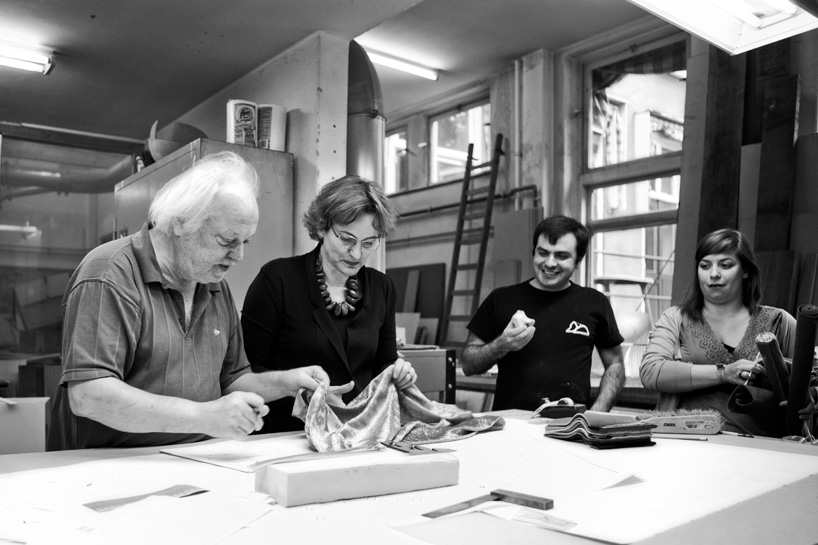 DB: how – and to what extent – do other creative fields influence your architectural work?

FH: the dutch theatre is very avant-garde, and I have many friends in that circle. I think that it’s possible to trace theatrical elements throughout mecanoo’s projects. not only have we always worked on theatres, such as the trust in amsterdam or the toneelschuur in haarlem, but the idea of dramatic ways of circulating through a building (such as in the library of birmingham) or the way a space is lit is often inspired by stage design.

our signature colour, mecanoo blue, is in fact a stage paint! 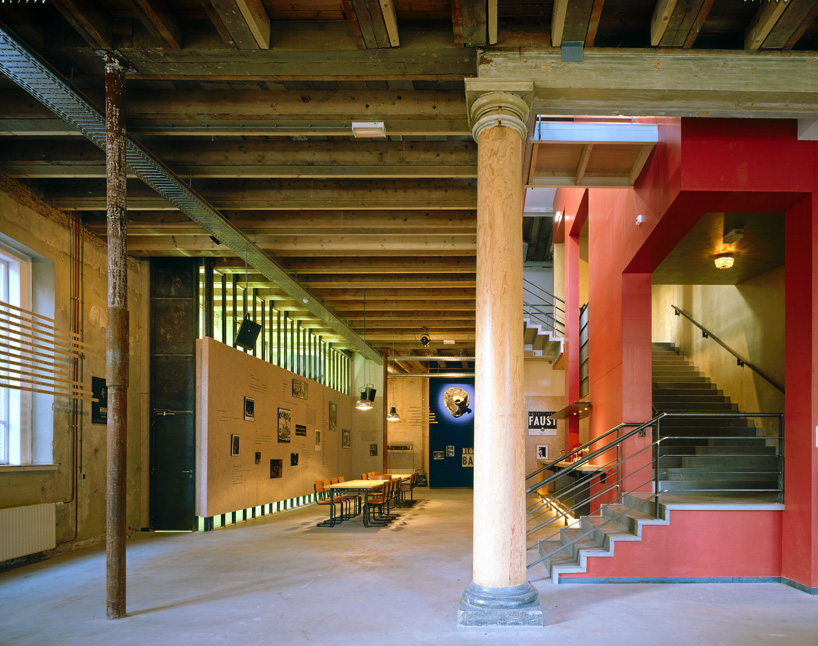 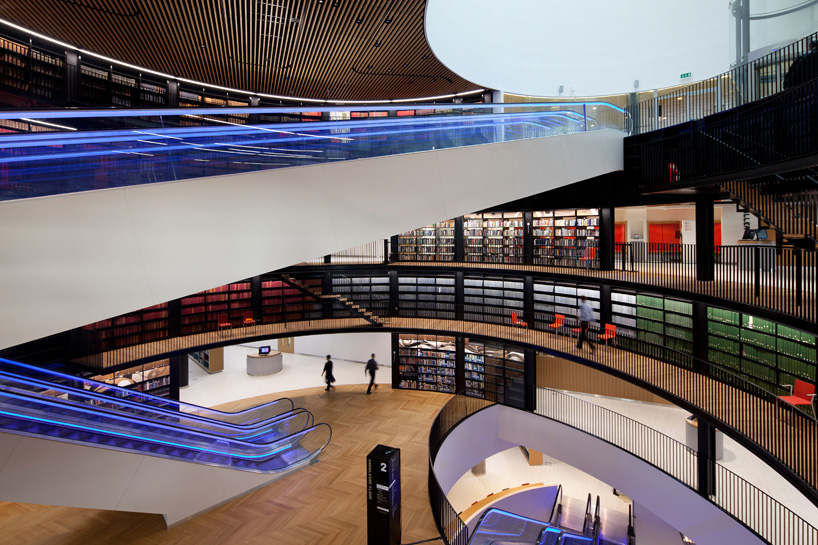 FH: there are so many great architects working right now, though the work of álvaro siza always reminds me of the late 1980s, when he often worked from our offices in delft whilst we were collaborating on projects in the hague. our work together taught me how to design with renewed freedom and ‘sculpturality’. you could say that it was his by working with siza that liberated me from the modernist way of thinking.

FH: we have so many fascinating projects in the practice right now. our work on the new university of manchester engineering campus (UK) is just one of these. the particular challenge there is that we’re bringing together three vast faculties into one complex in the very heart of the city. this means that we’re working with a lot of other disciplines to develop complex laboratories and new kinds of learning spaces. I think that if you want to be an innovative practice, you have to embrace these kinds of exciting interdisciplinary architectural opportunities.

closer to home, we’re currently working on a more compact project in the grounds of château st. gerlach in the south of the netherlands. the long, slender pavilion has two large multifunctional spaces that will allow the castle to cater for meetings, events and for showcasing the produce made on the estate farms – all whilst having very little impact on the existing historic fabric.

when I last spoke to designboom, I mentioned the national kaohsiung center for performing arts (also known as the wei wu ying centre) which was, at that stage, just a concept design. six years later and it is well under construction. it’s such a monumental project that local ship builders are piecing the structure together section by section. it’s been an incredible journey and I can’t wait to see it open in 2015. 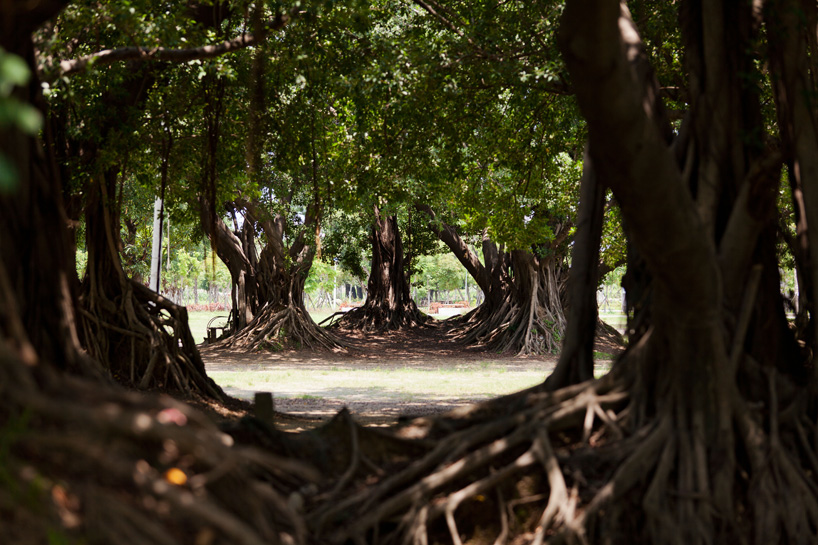 the concept of a large, protective canopy was inspired by the local banyan tree
image © harry cock 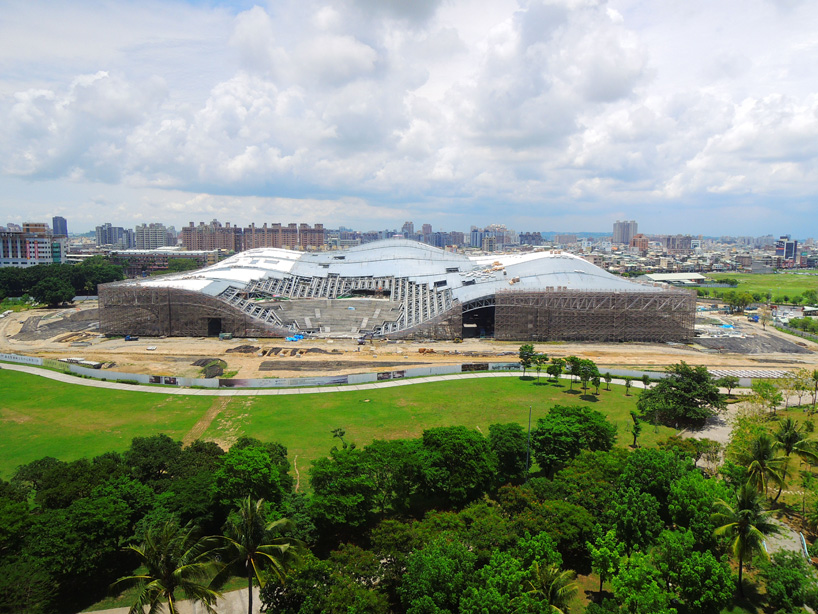 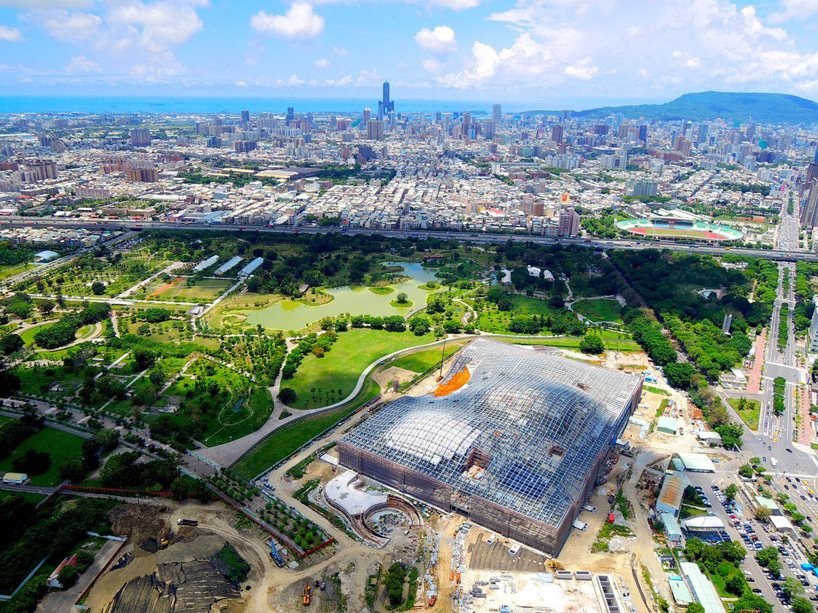 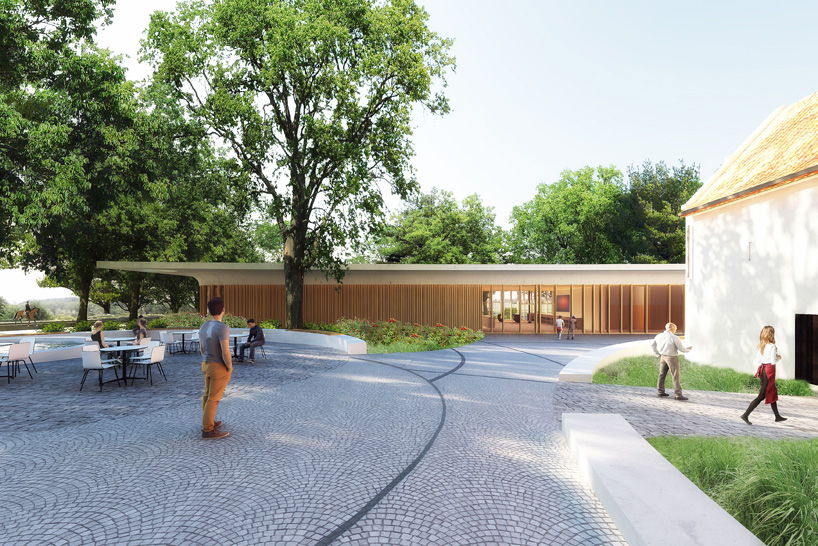 visualization of the pavilion in the grounds of château st. gerlach
image © mecanoo 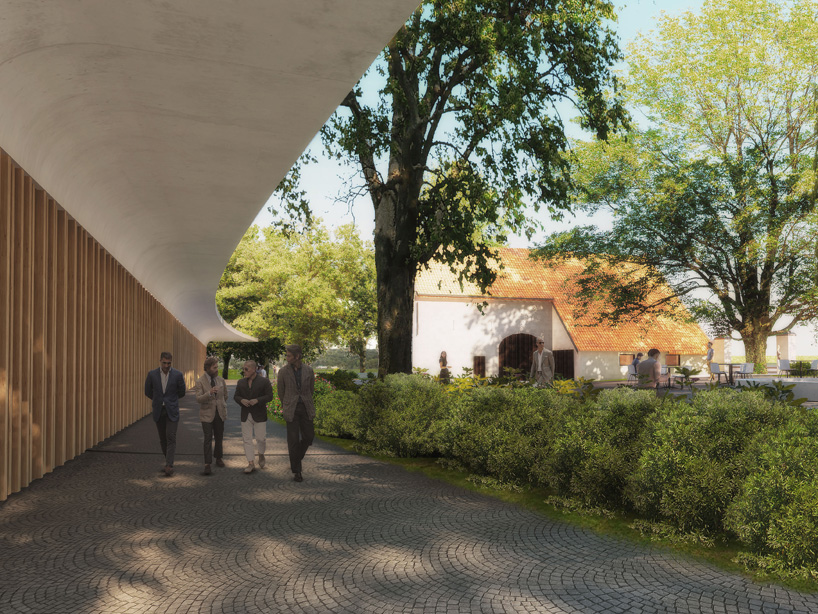 view from the pavilion
image © mecanoo

Mar 10, 2021
mecanoo plans macau central library with façade that opens like the pages of a book