architects françois martens and edouard brunet teamed up for the renovation of a typical terraced house found in brussels. the project was commissioned by the owner of a five-floor building who decided to split his dwelling into two apartments after his children grew up and left. the renovation consisted in turning the existing single family terraced residence into a building of two separate flats, that although seemed like a relatively small project, was very ambitious. 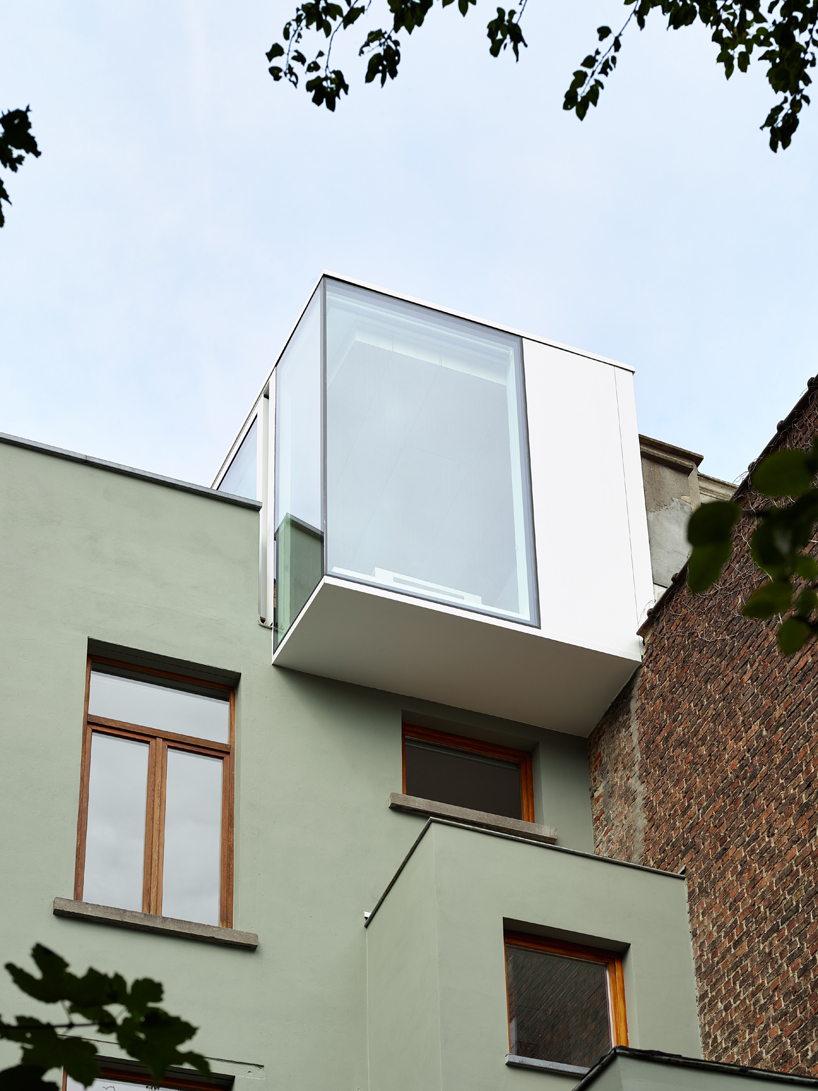 t
the new cantilevered space is purposely and visibly contemporary

the two architects suggested using the upper flat’s space as the living area on the top floor of the house, as to limit the nuisances between neighbors, but also to benefit from the light and open views that this floor offers. because of the limited total surface area of each floor and the top floor being set up in the attic, they decided to tear down the rear part of the roof. this allowed them to build a terrace and a new cantilevered space right where the former staircase was — installing a new one in the center of the building. 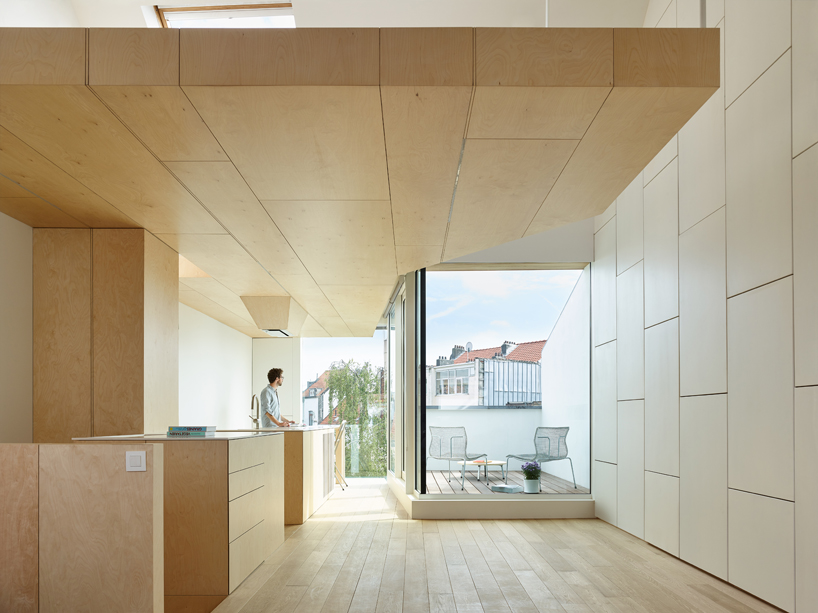 this setting allowed to upgrade the living area, giving it direct access to the terrace and more daylight reaching further into the flat. the new kitchen was enhanced with an open view to the back gardens and yards, as well as to the sky and brussel’s skyline. the creation of the terrace, apart from providing an intimate outdoor area, also adds a new element to the south façade that looks towards the south, letting more natural into the house. 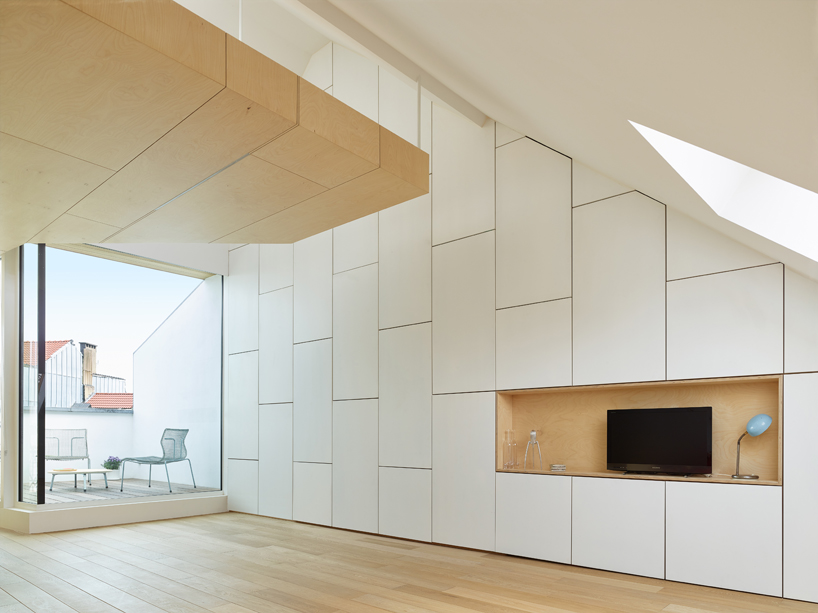 the lower part of the house saw minor changes which consisted of wood and iron fitting works. to make the flats independent, a new suspended staircase was drawn and designed alongside the craftsperson who manufactured it. the bathroom was also entirely redesigned. the combination of bamboo and iron gives this part of the house a unique atmosphere. 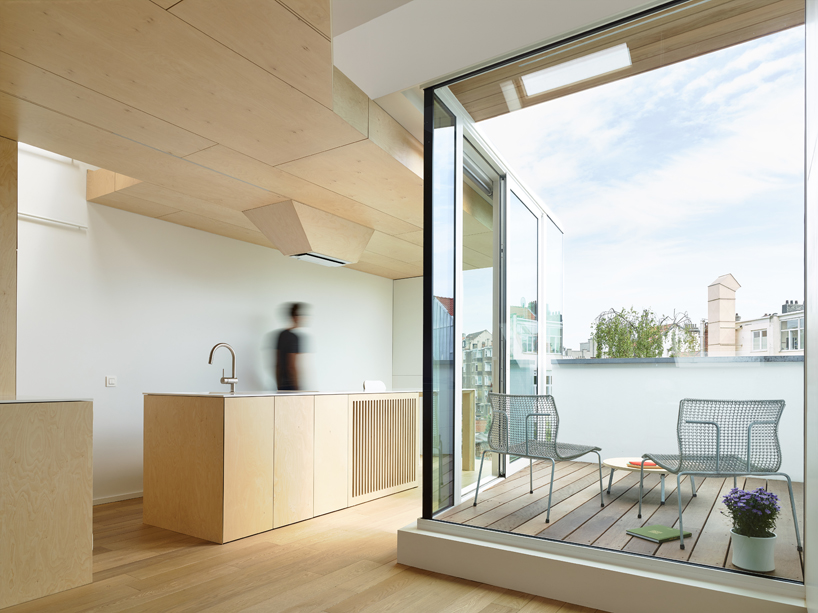 direct views on neighboring houses were avoided, and distances and alignments were respected

the new cantilevered space’s style is purposely and visibly contemporary, as well as uncluttered to distinguish it from the existing building: the city becomes the expression of various periods, such as a palimpsest would be. this project is the first collaboration between the two architects and it is the best example of their great attention to details, as well as their constant search for clever solutions. regardless of the limited budget, they had their aim clear — that of creating spaces that offer light, city views and use noble materials. 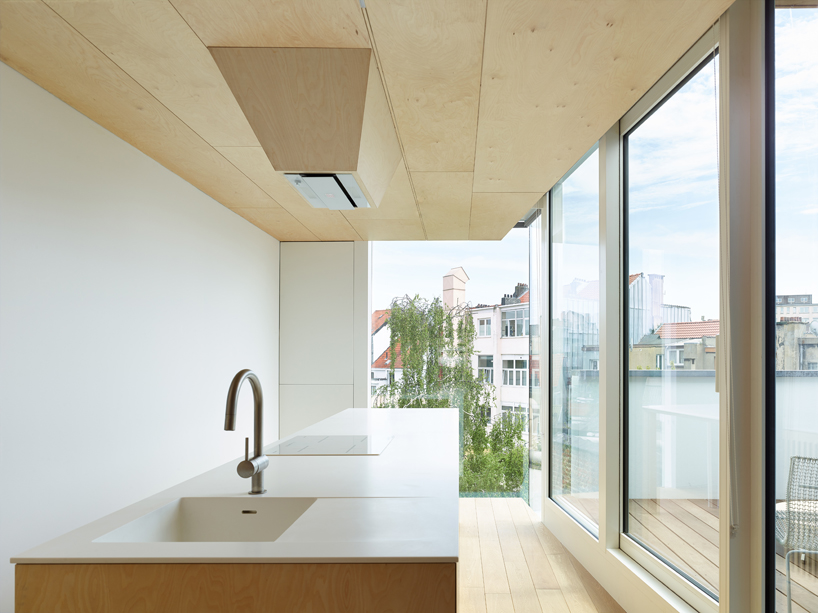 the new kitchen has an open view to the back gardens and yards, and to brussels’ skyline 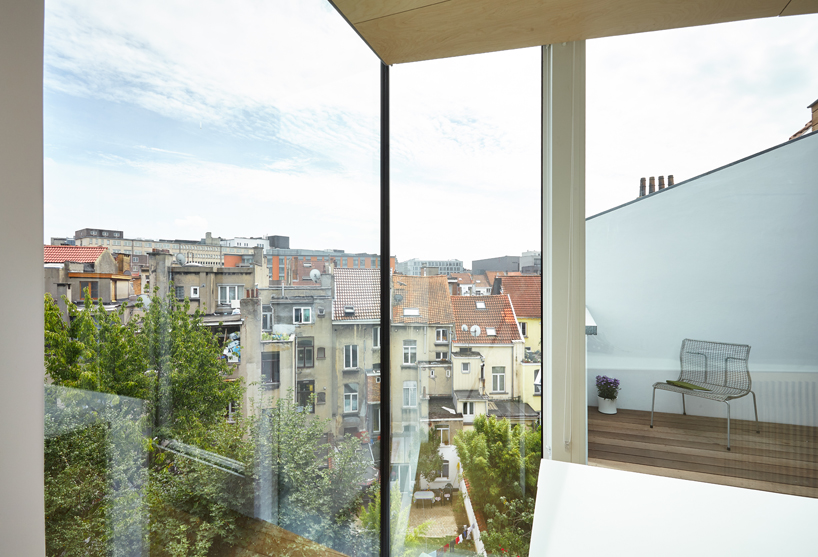 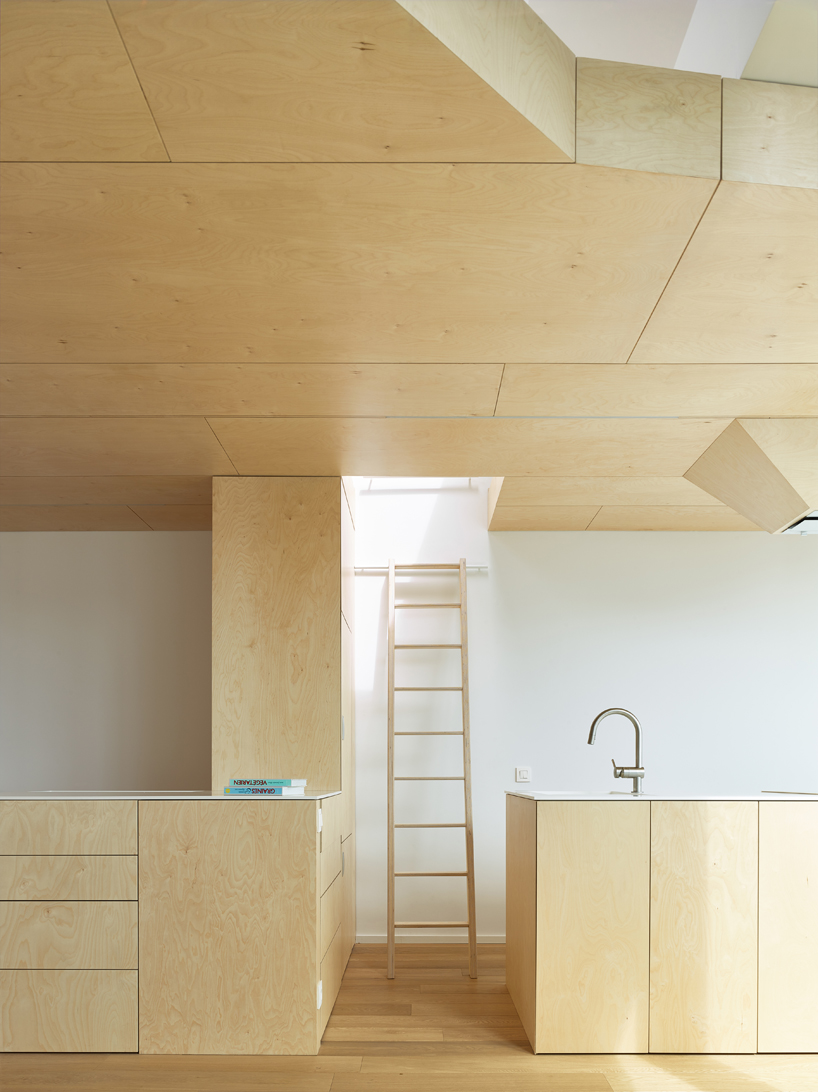 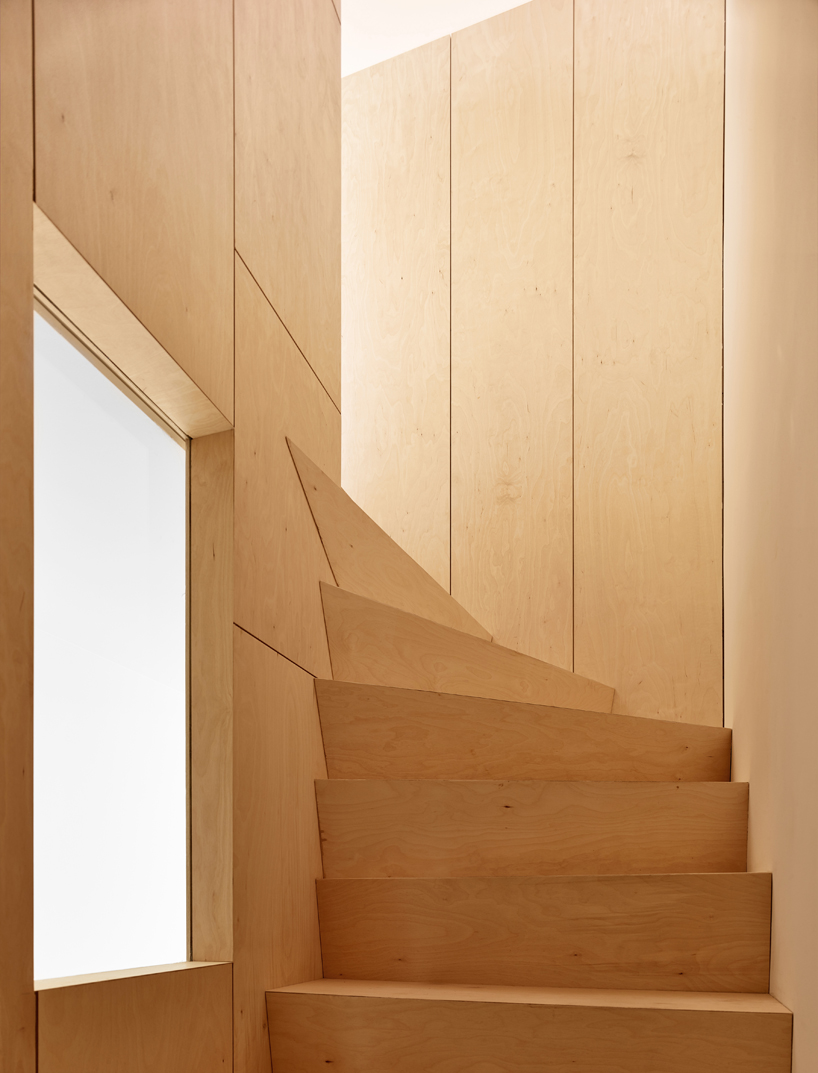 a staircase was added 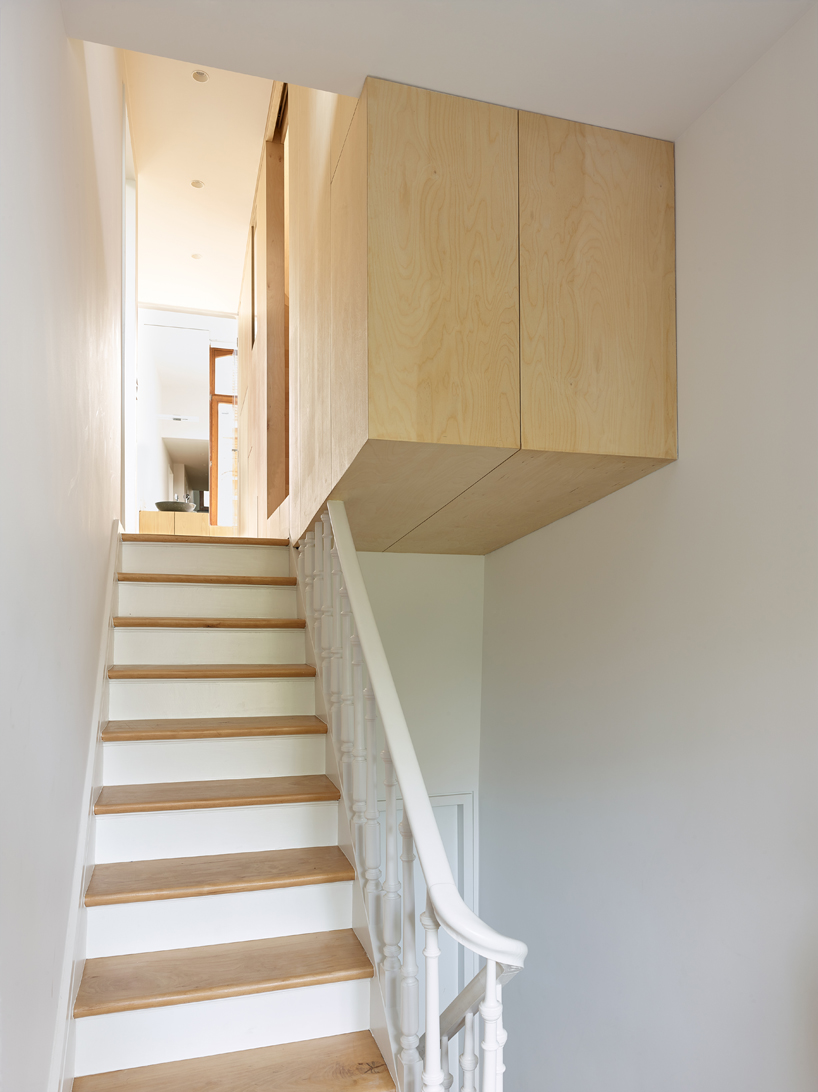 the mezzanine was suspended, to allow the overall attic volume to be seen 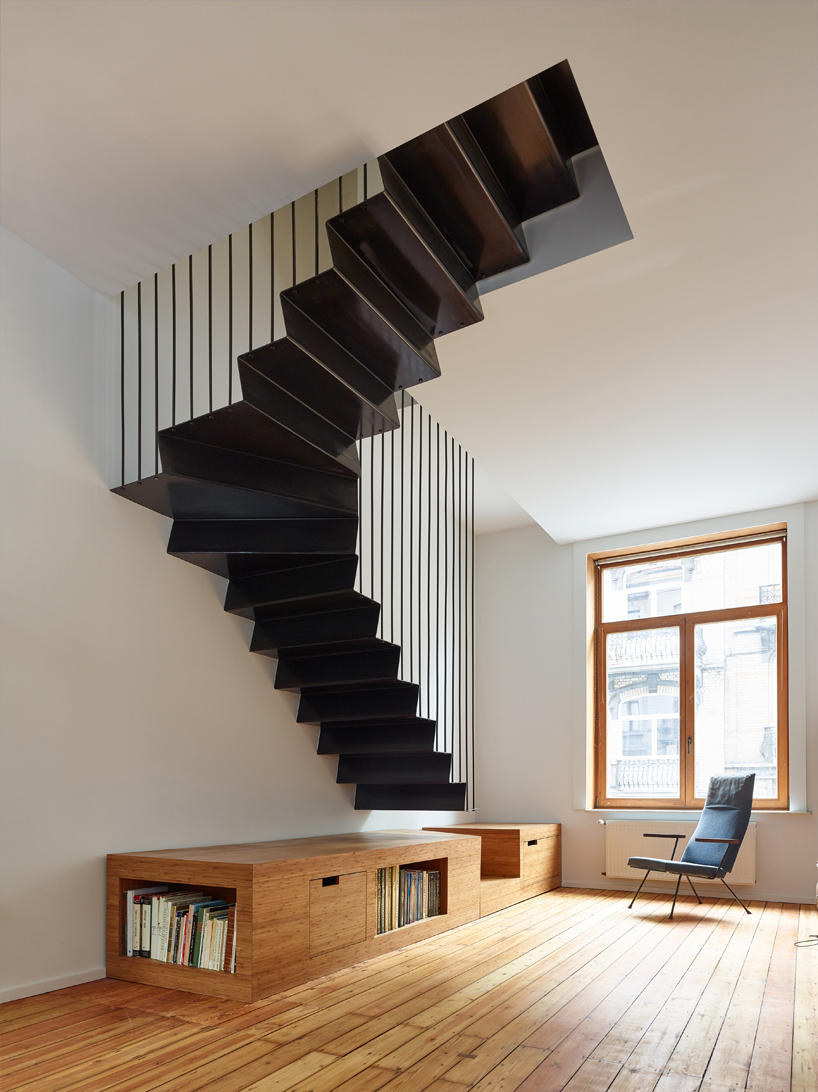 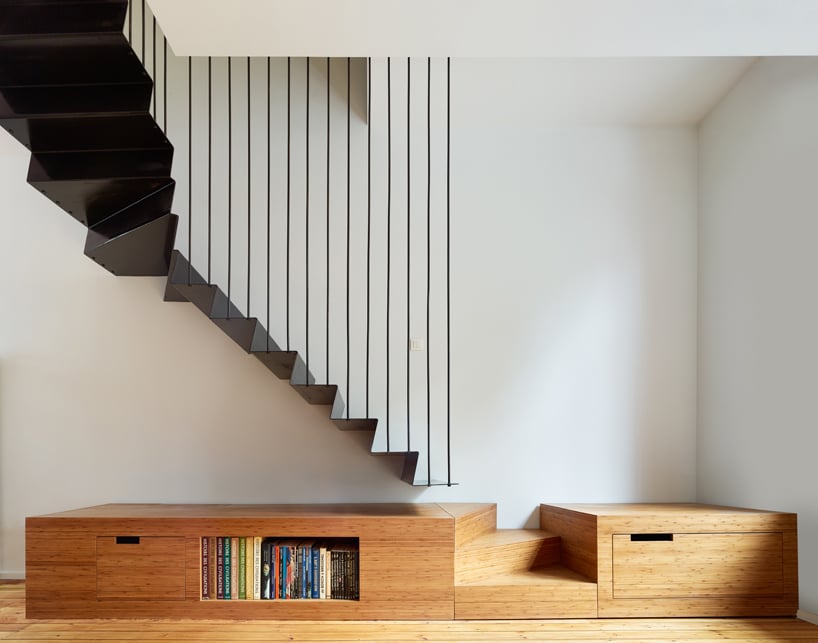