last year, los angeles-based architect frank gehry won a competition to design the eisenhower memorial, a national tribute to dwight d. eisenhower, the 34th president of the U.S. who served from 1953 to 1961. gehry’s team was one of four finalists in the three-stage competition with began with forty-four design firms from across the U.S.

now design plans have been revealed, but, don’t expect to see the trademark gehry-style being employed here. for this project, he has traded his often flamboyant aesthetic, for a more classical and historical approach.

the memorial will be built on a four-acre site to be named ‘eisenhower square’, along independence avenue in the heart of washington DC. it will be a landscaped civic plaza which respects vistas to and from the U.S. capitol and the historic maryland avenue view corridor. the site will include a grove of oak trees, two parallel colonnades of limestone pillars and loosely piled limestone walls, with carved sculptural reliefs. there will be a gap in the colonnade as it runs along the avenue, creating open frame views of the capitol, marking the informal pedestrian entrance to the memorial site.

‘the approach to the design was to create a cohesive and important civic space and urban monument in the heart of the capital region that provides a quiet and contemplative space for learning about the vast accomplishments of president eisenhower,‘ gehry said. ‘he was a masterful but modest leader. my aim was to capture that spirit with the design.’

as part of the tribute, there will be a series of woven steel-mesh tapestries with images of eisenhower and his presidency. the idea of the panels came from gehry’s exploration of the tapestry collection at the philadelphia museum of art where he is working on an expansion.

the eisenhower memorial is the seventh national presidential memorial in the nation’s capital, and the first since 1997, when the franklin d. roosevelt memorial opened. it is expected to cost between 90 million USD and 120 million USD and should be completed within five years of gehry formally signing the contract. 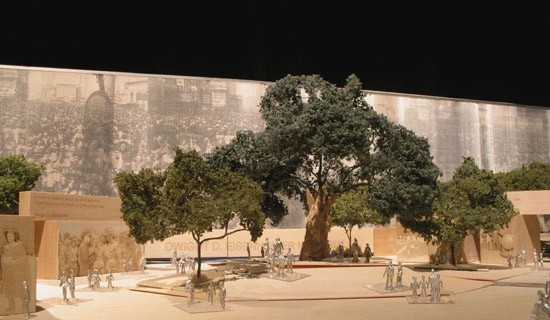 detail of the plaza 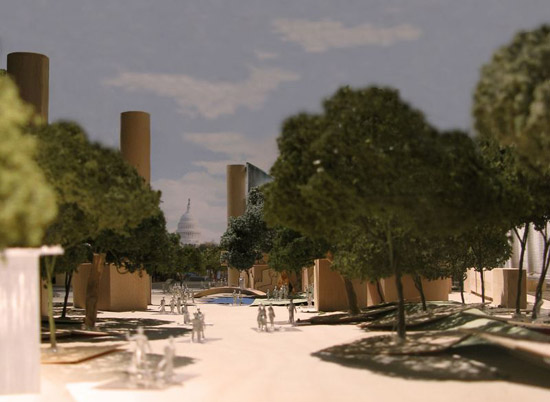