eight buildings designed by frank lloyd wright have been nominated to the UNESCO world heritage list — a collection which represents the first modern architecture nomination from the united states to the list. spanning 50 years of american architect’s career, the projects include instantly recognizable structures such as fallingwater and new york’s guggenheim museum, as well as some lesser known, but equally significant, schemes.

the nomination was coordinated by the frank lloyd wright building conservancy, a private nonprofit organization based in chicago, illinois. the national park service submitted the nomination to the world heritage centre in paris on november 20, 2018, and it will be reviewed at the 2019 session of the world heritage committee, scheduled to be held in early july in baku, azerbaijan. see each of the eight projects below, and read more about the nomination process on the frank lloyd wright foundation’s website. 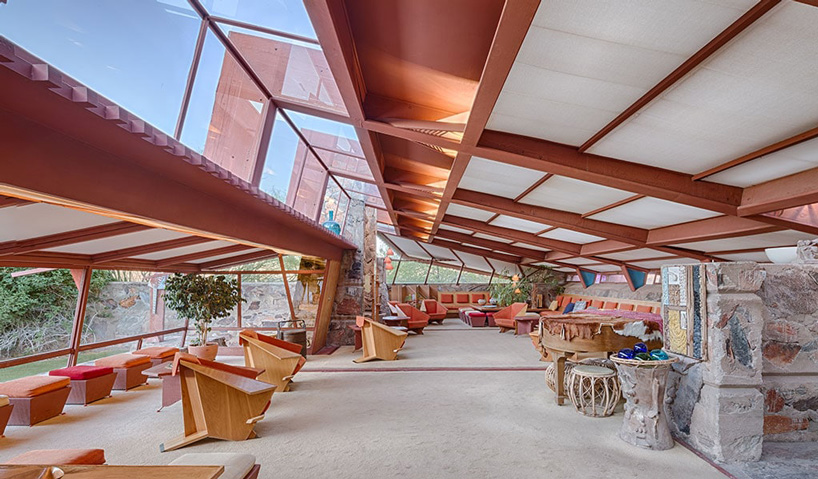 ‘taliesin west is a look over the rim of the world,’ said frank lloyd wright in 1943. nestled in the desert foothills of the mcdowell mountains in scottsdale, arizona, the building was wright’s winter home. nowadays taliesin west is the home of the frank lloyd wright foundation and the school of architecture at taliesin. ‘deeply connected to the desert from which it was forged, taliesin west possesses an almost prehistoric grandeur,’ says the FLW foundation. ‘it was built and maintained almost entirely by wright and his apprentices, making it among the most personal of the architect’s creations.’ 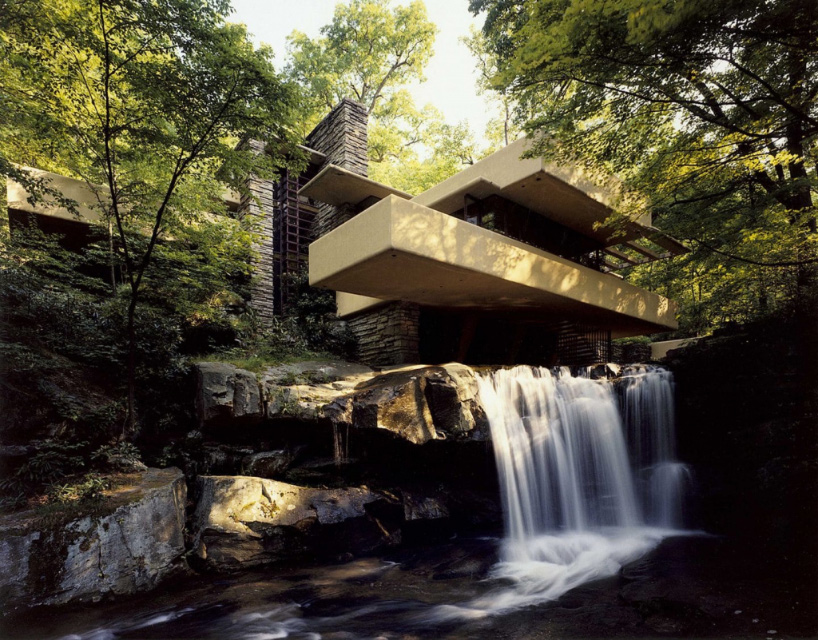 built in 1935, ‘fallingwater’ has been dubbed wright’s ‘crowning achievement in organic architecture’. the project was completed for edgar and liliane kaufmann, a prominent pittsburgh couple who were known for their distinctive sense of style and taste. according to the FLW foundation, wright was determined to build over the stream that punctuated the property. the architect remarked that rather than simply look out at it, he wanted the kaufmanns to ‘live with the waterfall… as an integral part of [their] lives.’ 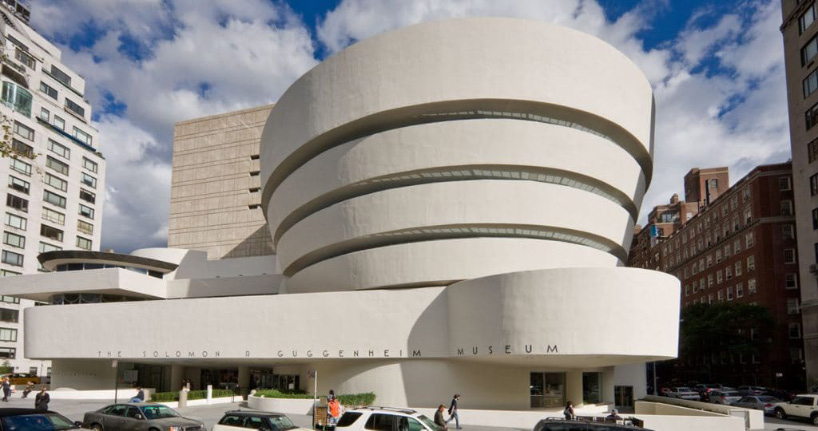 in 1943, museum director hilla von rebay sought a ‘temple for the spirit’ in which to house solomon r. guggenheim’s growing collection of modern art. she commissioned frank lloyd wright, despite the fact that he had never received a significant commission in new york. 16 years later — following over 700 sketches, countless meetings, and the death of both guggenheim and wright — the architect’s self-described ‘archeseum’ was finally unveiled. the building has been widely credited with launching the age of museum architecture, with the design positing that a collection’s physical home could be as crucial a part of the museum experience as the work itself. 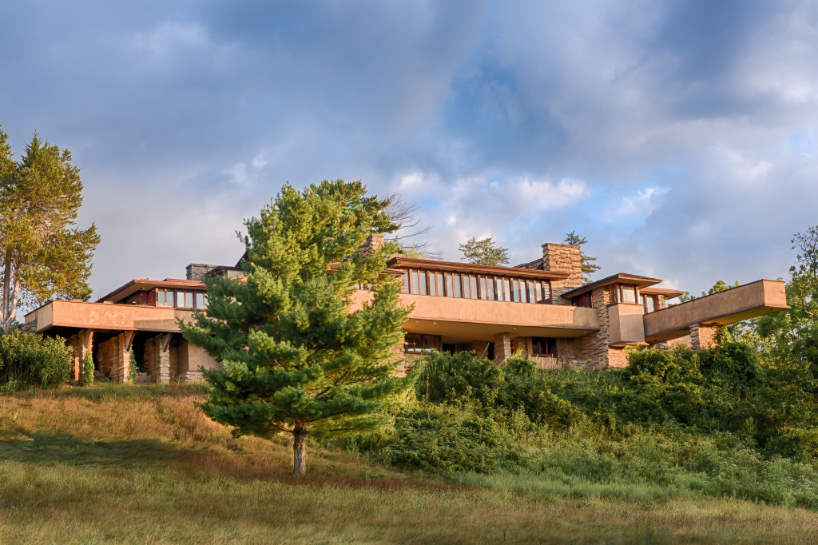 taliesin is the home, studio, school, and 800-acre agricultural estate of frank lloyd wright. the architect built the structure on his favorite boyhood hill in the wisconsin river valley homesteaded by his welsh grandparents, and named it taliesin in honor of the welsh bard whose name means ‘shining brow’. ‘I meant to live if I could an unconventional life,’ wright explained. ‘I turned to this hill in the valley as my grandfather before me had turned to america — as a hope and haven.’ 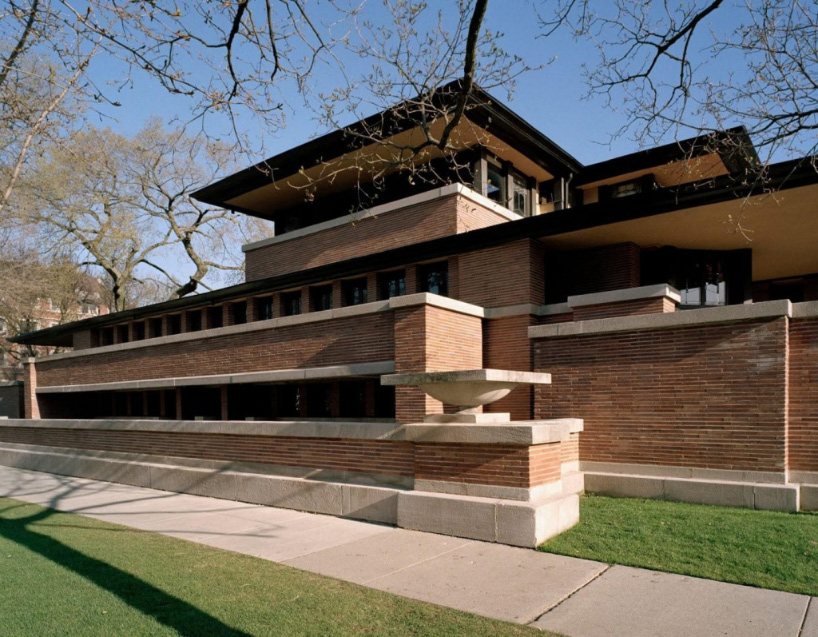 designed as two large rectangles that seem to slide past one another, the long, horizontal residence that wright created for 28-year-old frederick robie, boldly established a new form of domestic design: the prairie style. according to the FLW foundation, the meticulously coordinated design of the ‘robie house’ has made it the ‘measuring stick’ against which all other prairie school buildings are compared. 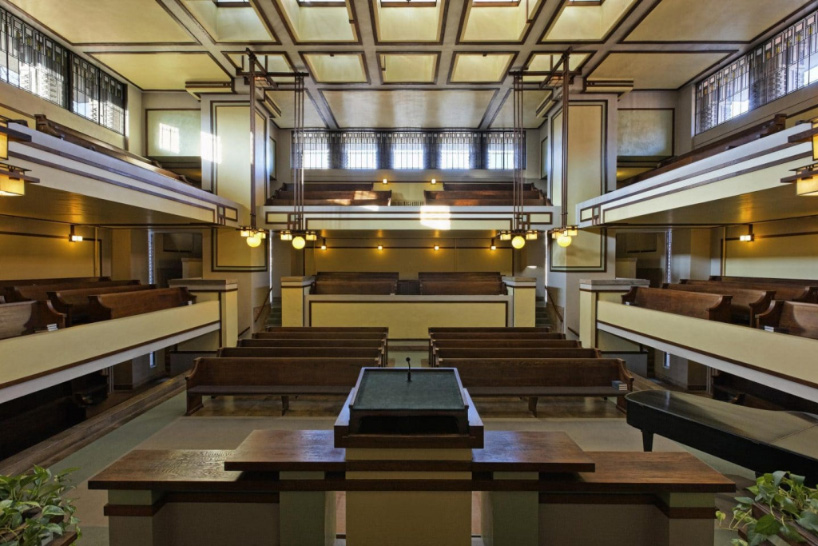 when the universalist church of oak park was struck by lightning and burned to the ground, wright was asked to design its replacement. in response, the architect designed two separate high, skylit spaces: unity temple, designed for worship; and unity house, used for the congregation’s social gatherings. connected by a low, central entrance hall, the temple’s plan is a perfect square, creating a sense of unity and allowing up to 400 congregants to be within 40 feet of the pulpit.

the herbert and katherine jacobs house 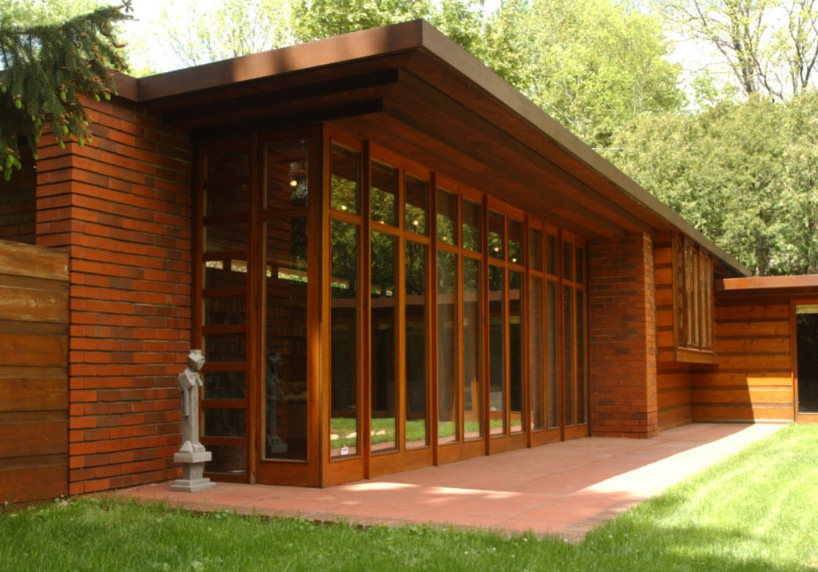 usonia — a name derived from ‘united states of north america’ — was the term wright coined to describe his vision for a new affordable architecture that freed itself from european conventions and responded to the american landscape. challenged by herbert jacobs to create a home for $5,000, the herbert and katherine jacobs house is widely considered to be wright’s first usonian structure. the house’s open arrangement of living room, dining room and kitchen was also later adopted in the ranch style houses that populated post-war american suburbs, underscoring the building’s historical significance. 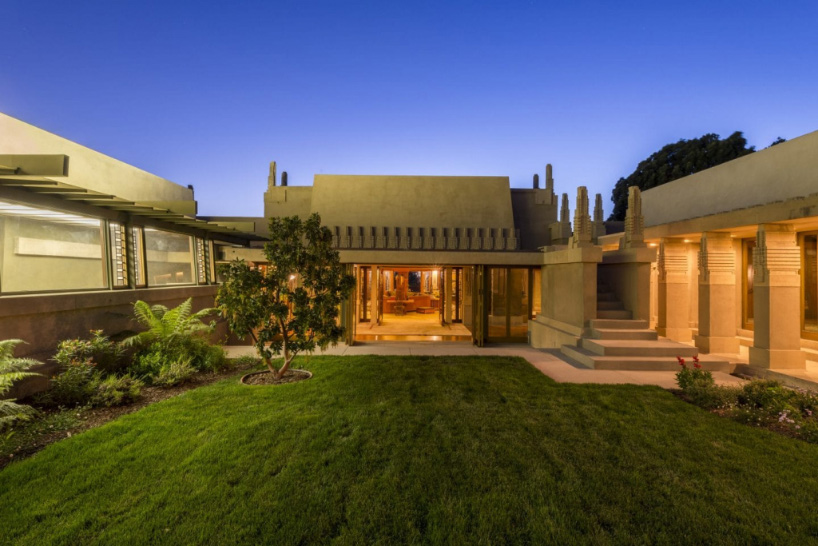 perched on a 36-acre hilltop in east hollywood, wright’s first and most widely known west coast design defies stylistic categorization. variously described as mayan, aztec, asian, egyptian, and as a ‘california romanza’ by the architect himself, hollyhock house was a transitional structure for wright. the client, aline barnsdall, requested a residence that was half house and half garden inspired the numerous terraces, colonnades and pergolas that join the hollyhock house’s interior and exterior spaces. a series of rooftop terraces takes advantage of the temperate climate, providing views of the los angeles basin and the hollywood hills. 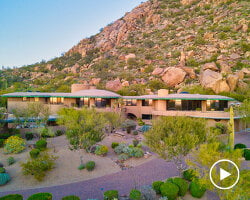