fuksas has completed the ‘new rome-EUR convention center and hotel’ in the italian capital, which forms the city’s largest building in more than half a century. costing a total of €239 million ($262 million USD), the major complex has been named ‘the cloud’, a moniker that references an independent cocoon-like structure situated at its heart. after 18 years of planning and construction, the scheme is now open to the public. 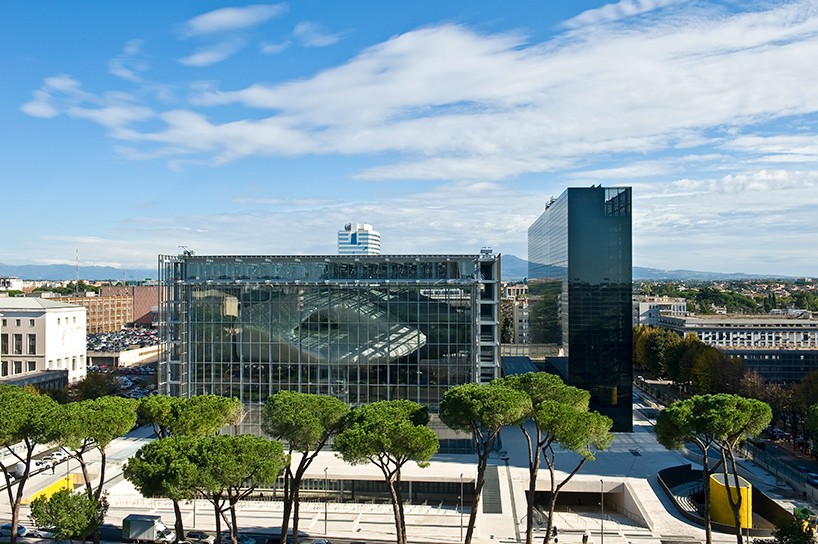 located in the business district of EUR, south of the city’s core, the layout follows the simple orthogonal lines of the district’s 1930s rationalist architecture. the complex hosts auditoriums, exhibition spaces, and a hotel, and is expected to generate between €300-400 million each year. two squares flank the building, providing venues for various leisure and outdoor activities and offering an area for public congregation. 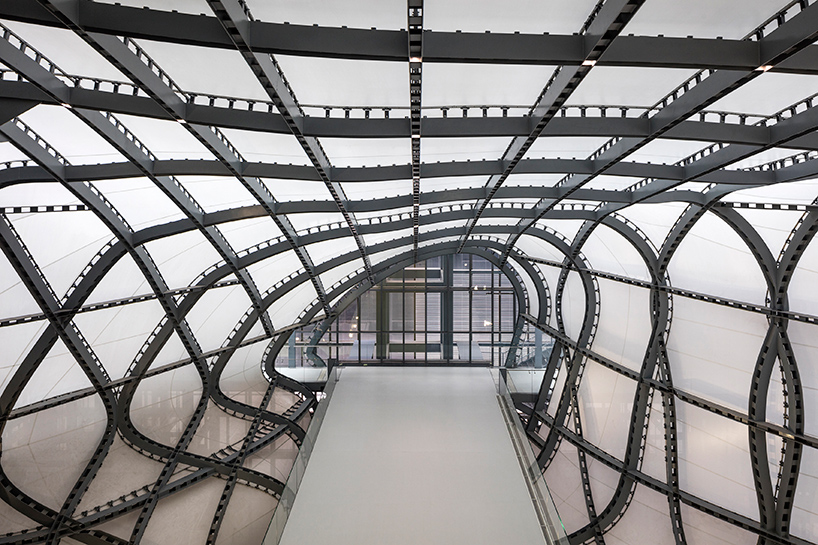 designed by fuksas — the architecture studio led by massimiliano and doriana fuksas — the complex comprises three distinct architectural concepts: the ‘theca’ — a longitudinally-oriented steel and glass box; the ‘cloud’ — a geometrically undefined shape positioned inside the ‘theca’; and the ‘blade’ — an autonomous edifice containing a 439-room hotel. 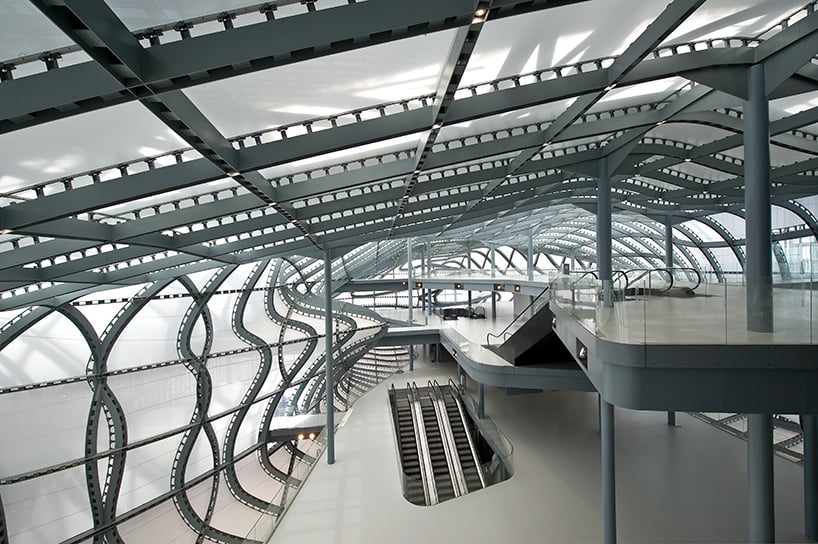 made from a combination of metal, glass and reinforced concrete, the ‘theca’ is the outershell and façade of the convention hall and hotel. internally, 7,800 square metres of new public space hosts both public and private conferences, exhibitions, and large-scale events. the focal point of the scheme is the ‘cloud’, a steel-ribbed structure clad with a translucent curtain measuring a total of 15,000 square meters. this part of the design exists in direct contrast with the rational building that surrounds it, containing an auditorium for 1,850 people as well as various support services. 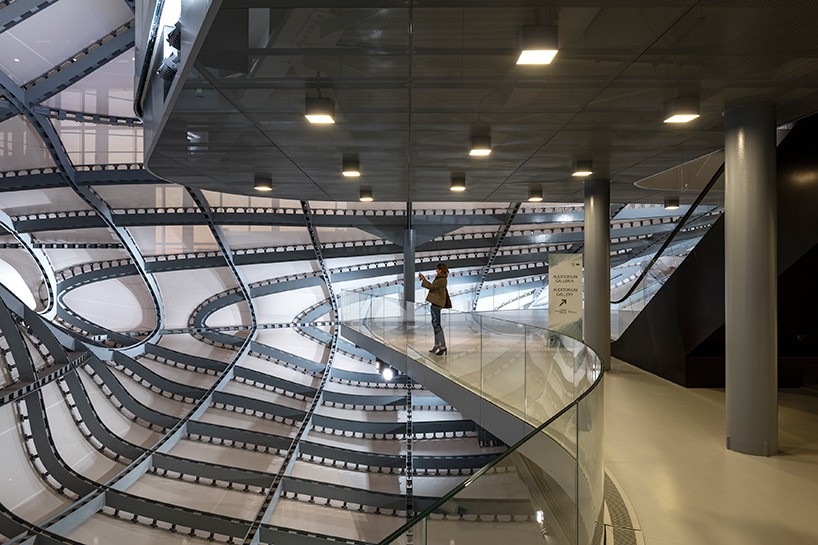 the final architectural gesture is the ‘blade’ — a separate building split into 17 floors and containing a 439-room hotel. spread over 18,000 square metres, the structure also includes seven boutique suites, a spa, and a restaurant. the building has been constructed from 37,000 tons of steel, which is the equivalent weight of four and a half eiffel towers. meanwhile, 58,000 metres of glass has been used, enough to cover the surface of 10 football pitches. the complex is also fully earthquake-proof with the stiffness of the vertical structure able to withstand seismic waves. from an environmental standpoint, a number of sustainable features have been integrated within the design. air-conditioning is carried out by a reversible heat pump, capable of achieving high energy performances while reducing electricity consumption. a natural ventilation system, which uses the cool water of a nearby lake, is also in place. rooftop photovoltaic panels help to produce energy, while simultaneously protecting the building from overheating through the mitigation of solar radiation. a rainwater harvesting system uses exterior panels to collect water and filter it into a storage tank for on-demand use. 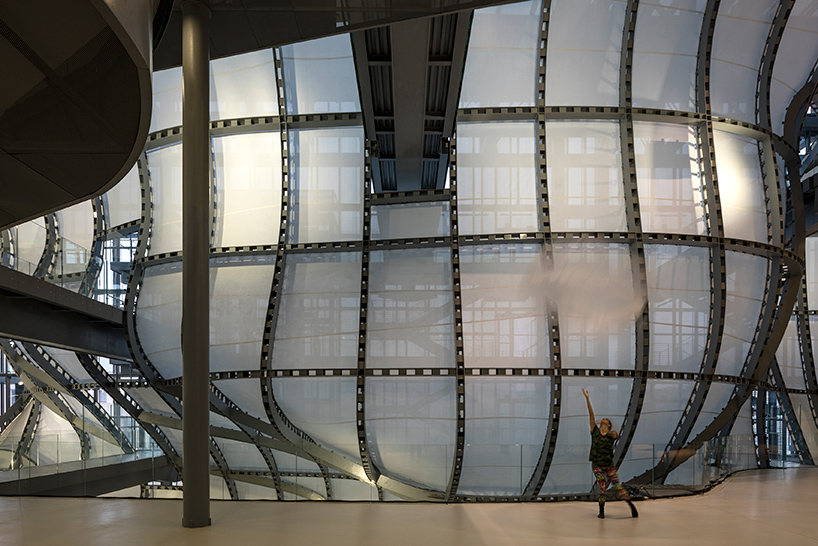 spaces can be reconfigured to accommodate large or small conferences, lectures, or events
image © leonardo finotti

the scheme’s internal layout was created with flexibility in mind, with interchangeable spaces able to be reconfigured to accommodate large or small conferences, lectures, and events. many of the interior details have also been realized by fuksas, including the red poltrona frau-made armchairs in the auditorium, and the bespoke ‘cloud’ lamp produced by iGuzzini. see designboom’s previous coverage of the project here. 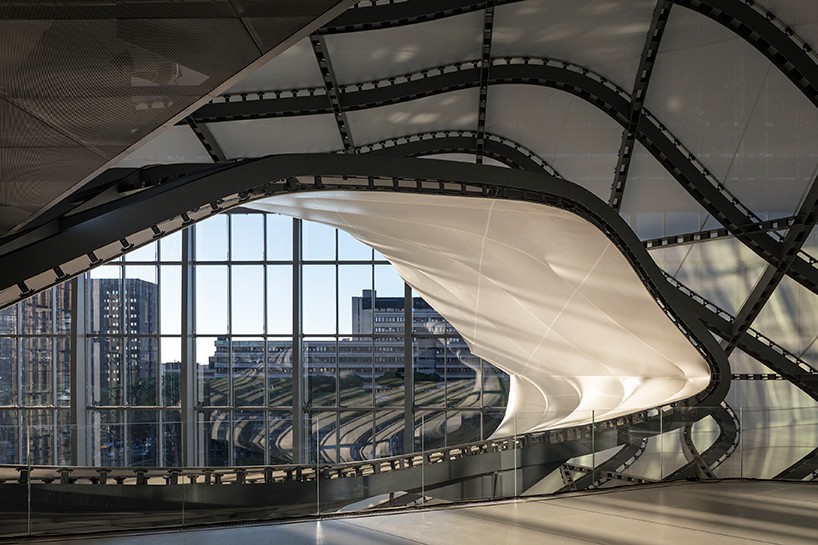 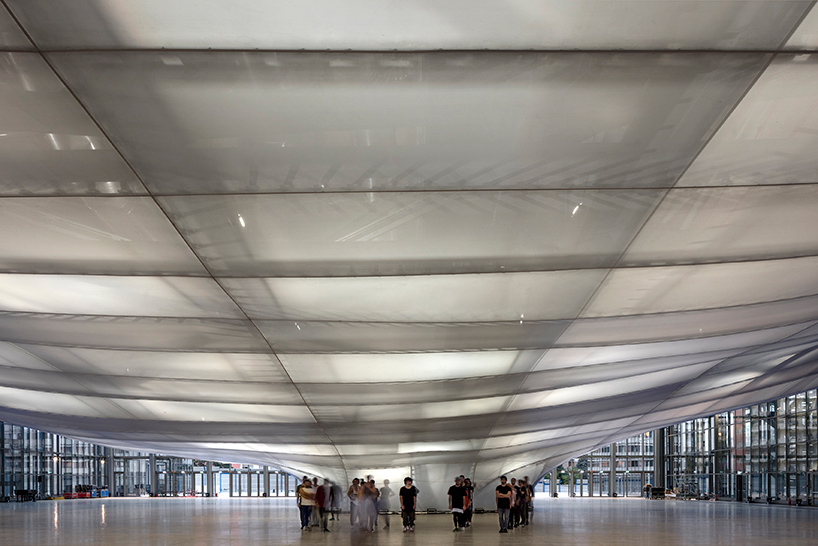 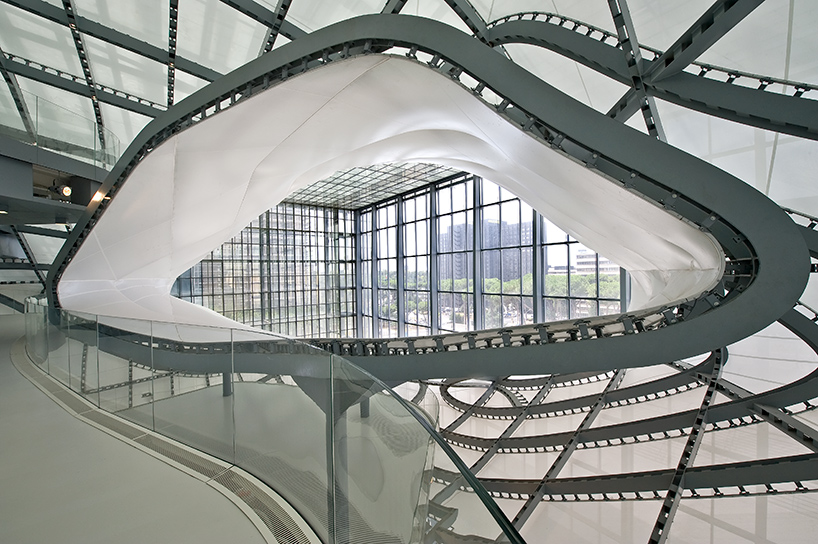 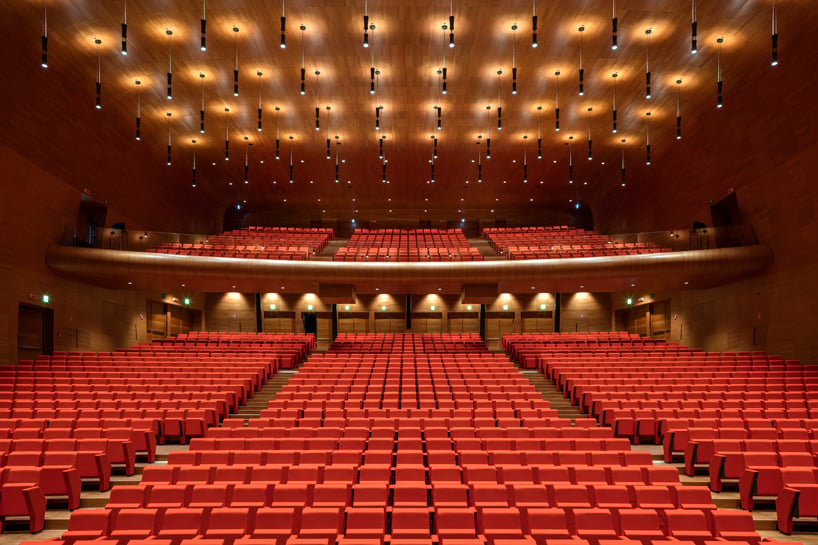 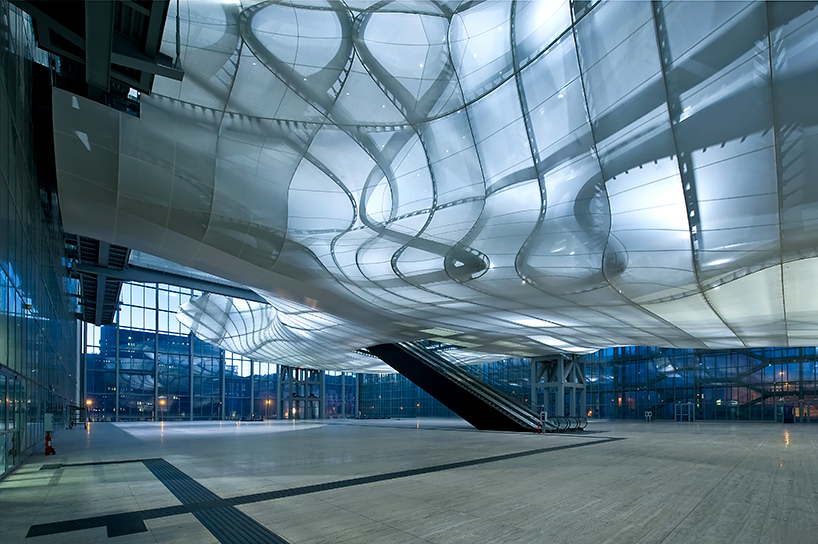 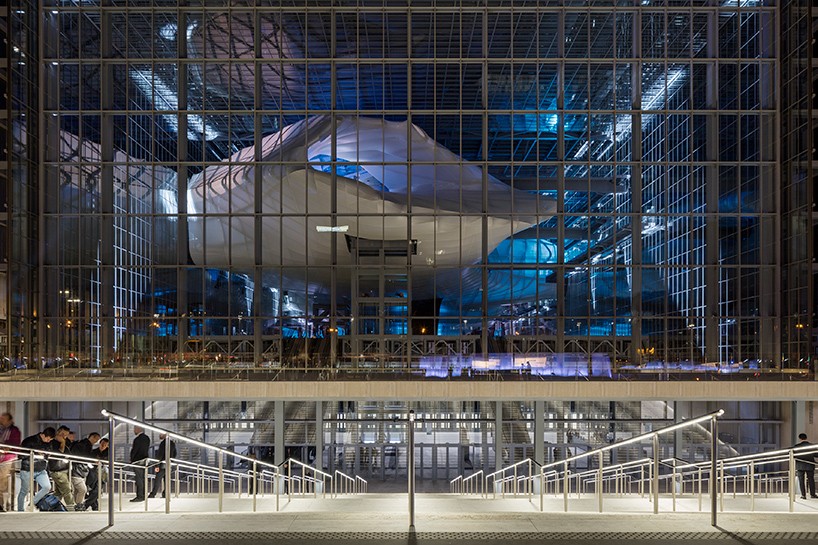 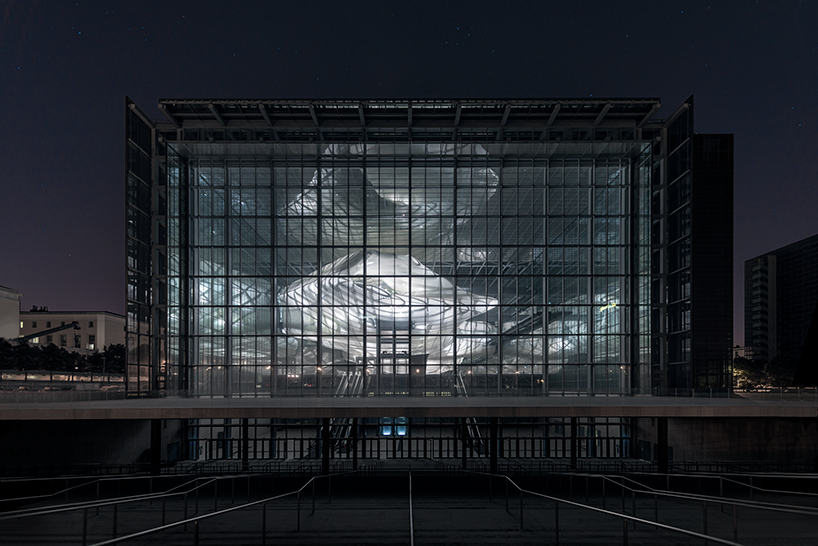 at night, the building serves as a beacon for the district
image © maurizio marcato 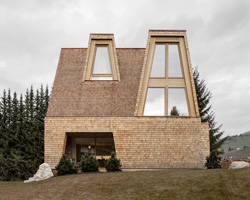 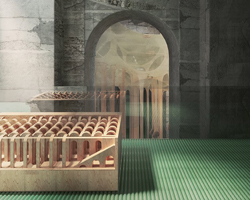 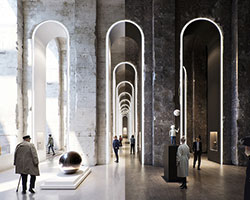 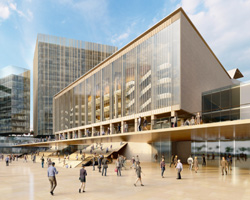 Sep 16, 2020
tadao ando completes 'he art museum' in china ahead of october 2020 opening
the building will house an art collection that consists of more than 500 works ranging from painting and calligraphy to photography and sculpture.
architecture
435 shares
connections: +1700