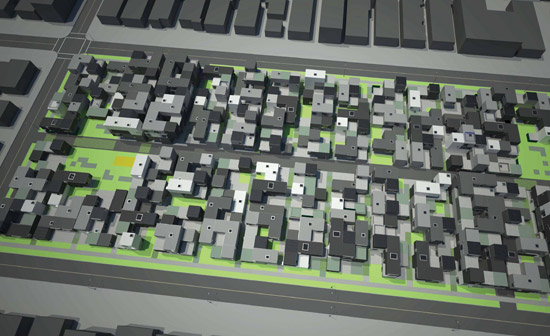 ‘variegated mat-scape’ is a prototype for generating spatial, programmatic, and material variation. not only is the idea of variegation intended to reflect and index the diverse cultural mosaic that comprises los angeles (and more particularly the palms neighborhood), but is also seen as a new typology a building-landscape -that celebrates (and materializes) multiplicity and difference by re-envisioning the relationship between interior and exterior space. instead of the usual hierarchical building-object to ground relationship, they propose a dense and diverse patchwork of volumes and surfaces that provides exterior green space for each resident as well as two larger ‘greens’  for the community. 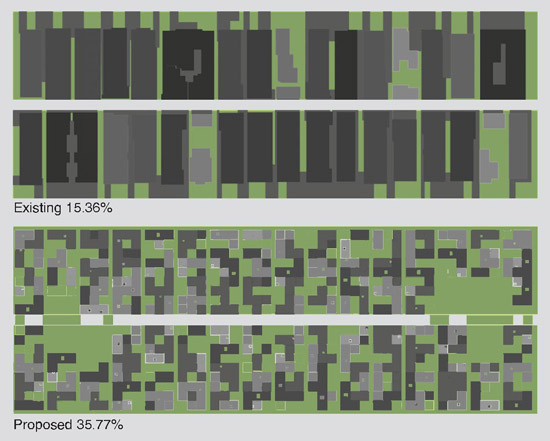 with a population of 45,475 people within an area of 1.9 square miles, the palms district is not only one of the most demographically diverse but also has one of the highest densities (21,983 people per square mile) in the city. and, with the eventual arrival of the metro expo line to the region these statistics will undoubtedly only increase. in spite of this the existing building fabric suffers from morphological sameness with a density coefficient that’s constant rather than variable. therefore, in order to address the projected growth the ‘variegated matscape’ employs a variable density gradient that ranges from one- and two-story units to fourstory clusters, resulting in a higher density per block as well as greater differentiation in the scale of the neighborhood. 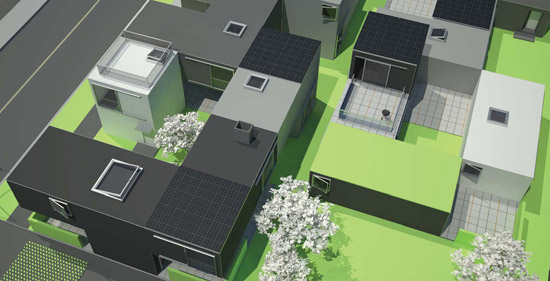 instead of the typical 50 x 150 foot r-2 parcel and setbacks, the firm adopted a composite organizational strategy of grids and ladders: a nine square grid measuring 48 x 48 feet with minimal setbacks and zero lot lines in places, and, a ‘ladder’ or fish-spine of 15 walk streets that traverse the block and provide access to the units. parking is situated below grade and accessed by a series of air and light portals that are sprinkled across the site. morphologically, the new grid operates in the z-axis as well as the horizontal; individual units are made up of two to five 16 x 16 x 10 foot spatial modules plus a 225 square foot patio and/or roof terrace. ranging in size from 450 to 1125 square feet, these units are interlocked and arranged in various ways based on orientation and local adjacencies to configure ten different unit types. similar to sol lewitt’s 46 variations on three different types of cubes or steven reich’s serial composition of looped and layered sounds for guitar, electric counterpoint, the endeavor is to produce a supple system that is a prototype and catalog of different spatial types, yet pliant enough to be recombined to adapt to local differences as well as the contemporary domestic landscape. 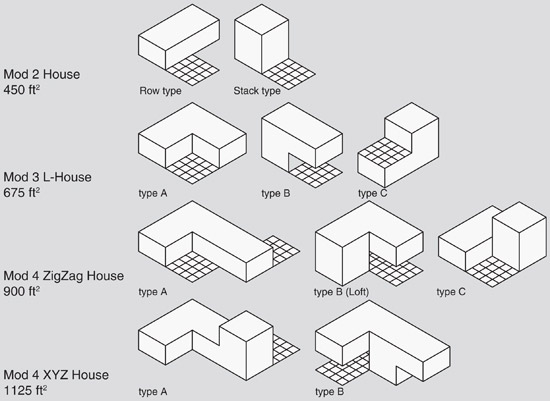 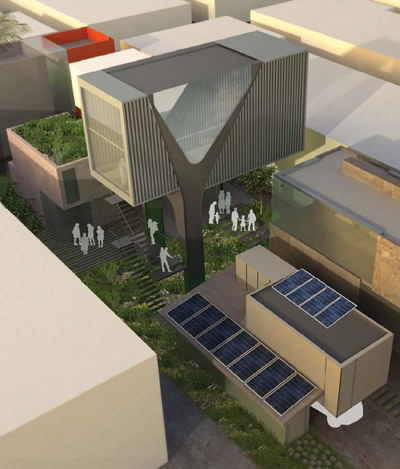