london-based practice george king architects’ (GKA) recent project, iron ring,  is a large scale, iconic sculpture for flint castle in the form of a 30 meter diameter rusted steel ring, resting on the banks of the dee estuary in wales. the sculpture symbolizes a giant rusted crown representing the intimate relationship between the medieval monarchies of europe and the castles they built. the sculpture’s precarious balanced form, half buried beneath the ground, half projecting into the air, demonstrates the unstable nature of the crown. 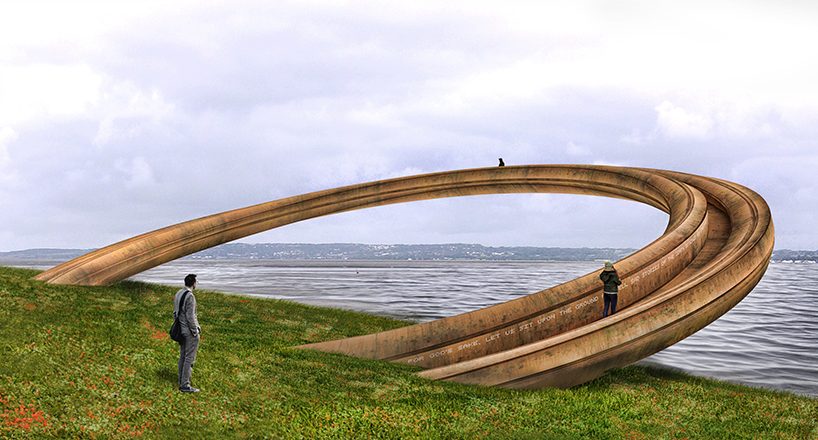 the entrance view overlooking the banks of the dee estuary

its location at flint castle marks the spot where the crown was famously transferred from one medieval dynasty to another, as described in shakespeare’s richard II. flint castle was the setting as richard II surrendered the crown to henry IV, a momentous event that shaped the history of britain and europe. GKA‘s iron ring has been carefully designed to work at many scales. from afar its striking form resembles a giant ancient artefact, washed up on the shore of the dee estuary. its scale and dynamic form, complemented by LED lighting, means that it will become an instantly recognizable landmark for the area. a passageway is carved out of the giant ring, allowing visitors to travel over its circumference. 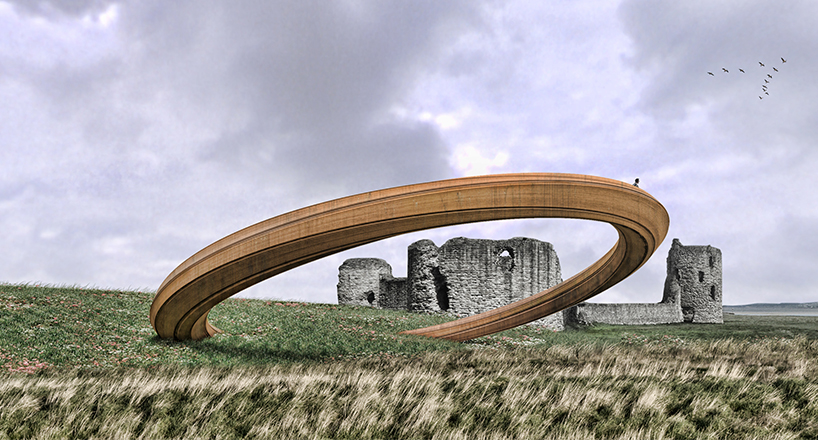 the gently sloping path elevates you above the ground, providing views of the estuary and of flint castle. upon closer inspection, the ring reveals the sides of the walkway that are intricately engraved. on one side of the path, the full length contains an iconic quote taken from shakespeare’s richard II as the king is considering surrendering his throne. on the other side the path turns the ring into a giant compass, providing the name and direction of the other castles that make up the iron ring, providing details of their own stories and legends and creating a link between them and flint that encourages visitors to visit the other castles in the ring. 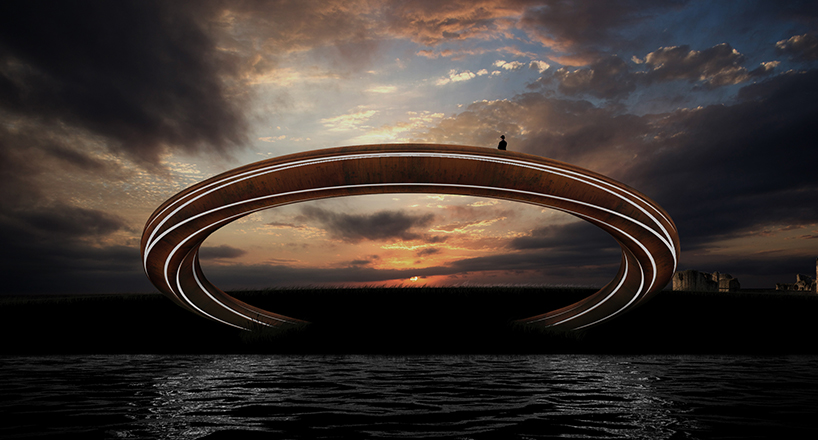 the external night view featuring LED around the outer circumference 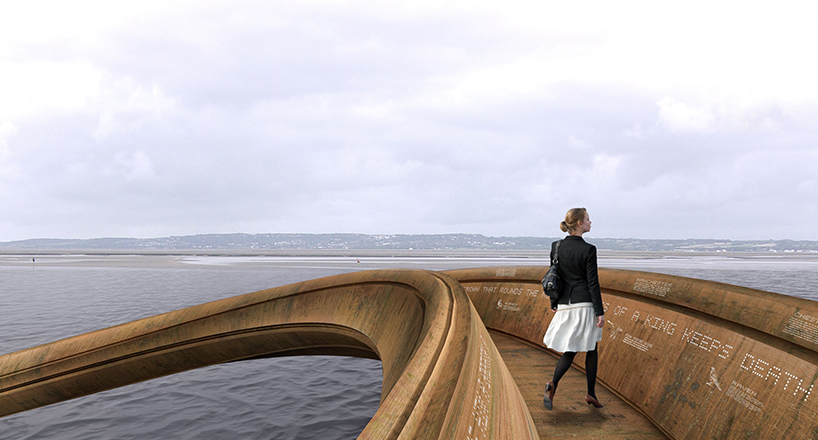 internal pathway inside the ring 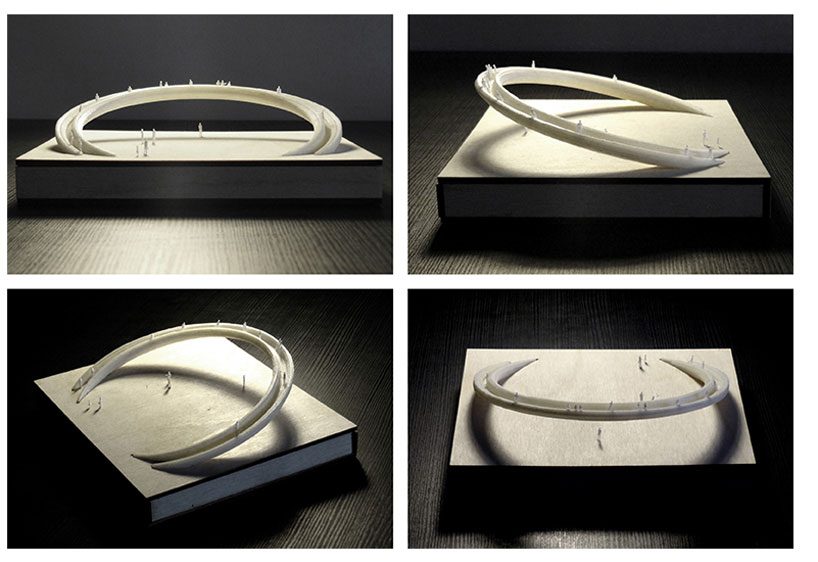 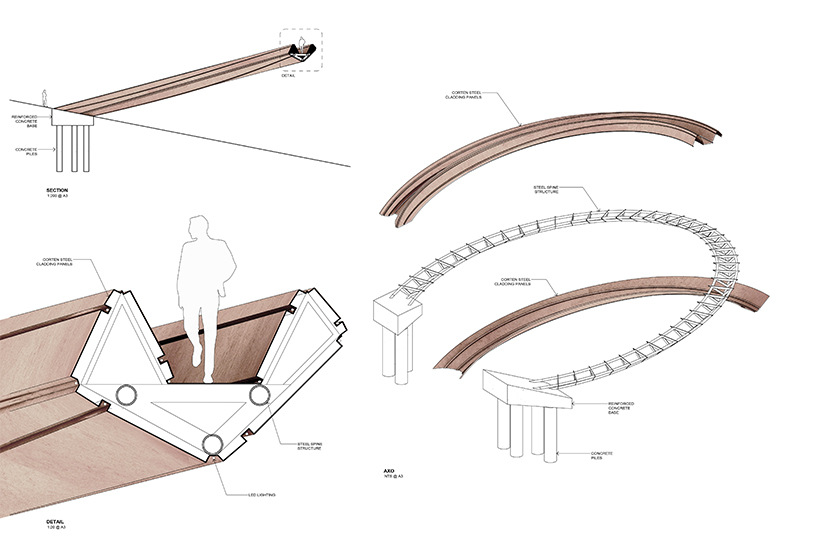 detailed drawings of the sculpture 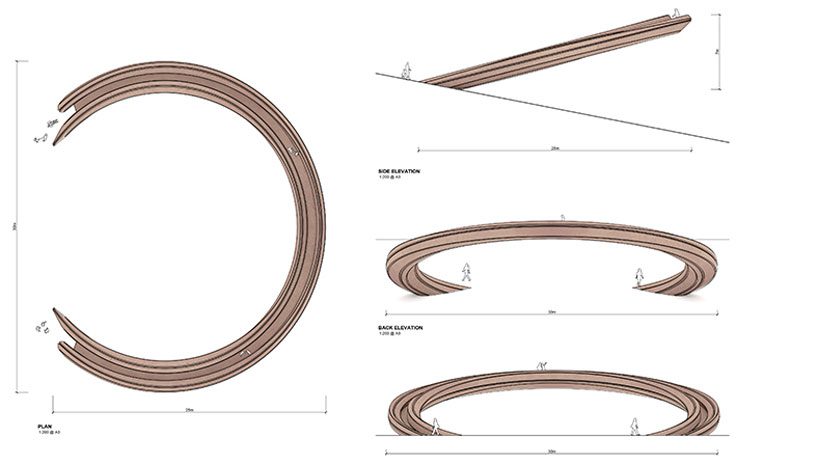