for over a thousand years, the silk road acted as a transmission vehicle allowing a stream of technology, goods, religion, culture, social practices to diffuse from asia, to europe, and the middle east. using one of the most important networks in history as inspiration, german architect peter ruge and his team have presented a project titled ‘G-ROAD’ to promote the practices of urban and sustainable design, green technology and a healthy environment across the world.

‘G-ROAD‘ is a collection of 15 sites stretching from bangladesh, to berlin, to the great wall of china. each are completely unique and act as a baseplate and operating base for communities and individuals around the world to gather, interact, learn, explain and share. thus, peter ruge’s ‘G-ROAD’ becomes a modern day silk road, bridging communication by interconnecting cultures, continents, countries and societies.

here are the 15 proposals:

the g-tower will act as a blueprint for a city to adapt and evolve into a new green and healthy city situated on the G-ROAD. it will act as a symbolic gate into the capital of germany, acting as a hub for innovation and entrepreneurship with an active startup scene. constructed out of wood and glass this tower stores a huge amount of co2 during its lifetime cycle. 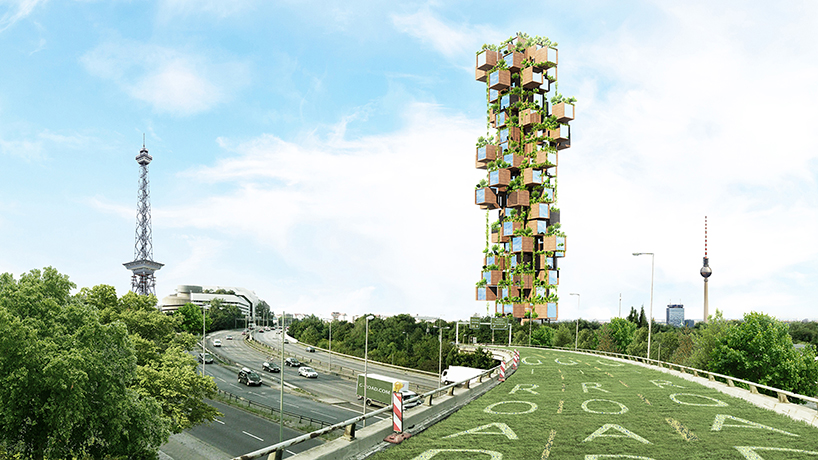 a strawberry shaped object named ‘hover the third’ focuses on the idea of allow the balance of life between work and family, and the distances that may occur as a result of the two being separated. ‘hover the third’ attempts to provide a new sustainable method of thinking along the road of dreams. 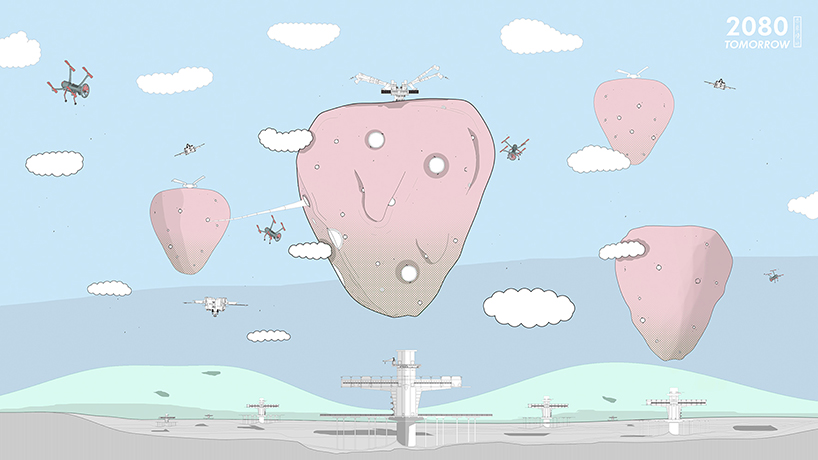 71% of blue is a compact sustainable response to the spirit of the G-ROAD. food and the agriculture are at the epicenter for a base of a green and healthy lifestyle that the G-ROAD wants to promote. a multilayered approach combines methods of food production, creative thinking and wellbeing. it is dedicated to artists who work and live for the locals and visitor to enjoy and carry out activities. 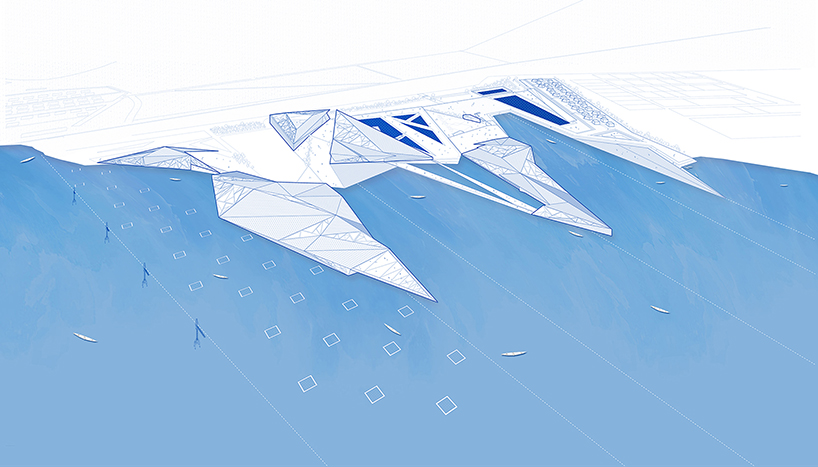 golden panda waterwheel uses vernacular architecture to establish community interaction. combining a modular power plant with a kinetic gym, the wheel generates energy to utilize a green and healthy perspective. situated in an abundant area of plenty of remaining local qualities, it forms an independent cultural reanimation that suits local nature while avoiding the cause of negative effects to the environment. 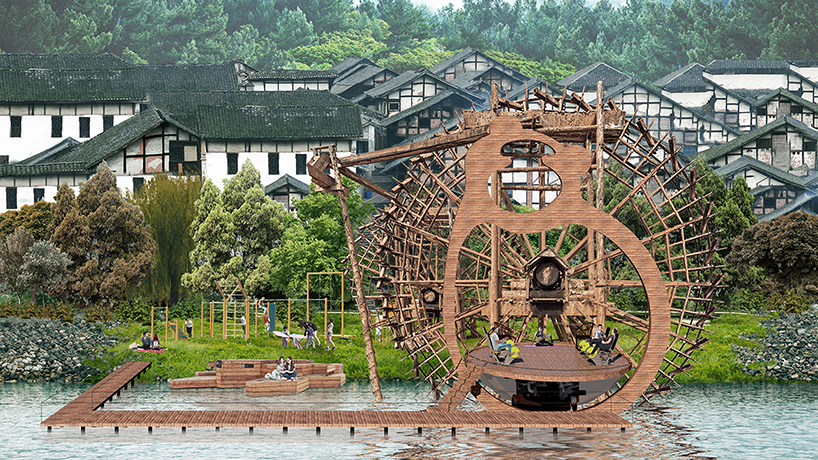 g–street libraries emphasize the ability of equipping a city with the power of education, for free. throughout history information and education are at the epicenter for a prosperous future. this g-street libraries is built for free reading and cultural exchange. using recycled bricks available in syria, the library takes a unique beehive shape inspired by the traditional syrian house in ancient dwellings that go back more than 5,000 years. 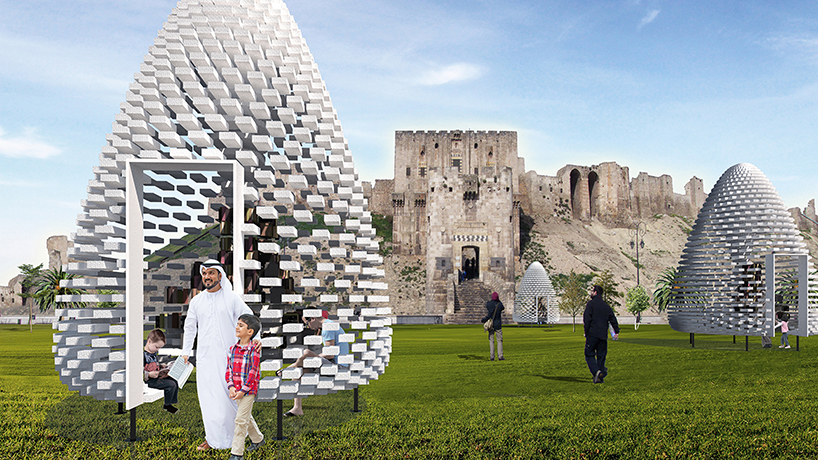 at the heart of the silk road and the G-ROAD is the capability of sharing information. the g-spine acts as an innovative energy, water and big-data infrastructure to diffuse along the network while launching a cross-sustainable partnership between heterogeneous communities. 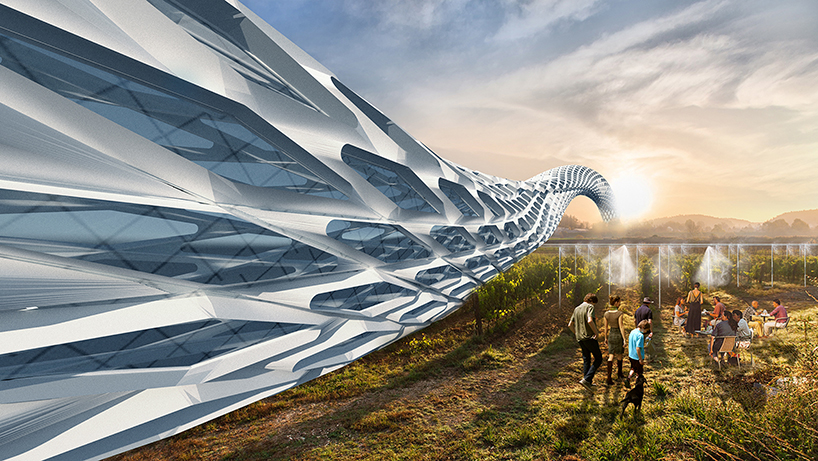 g-shell is a modular pod that tackles soil erosion by increasing the efficiency of revegetation. it is inspired by the natural form of sand dunes shaped by the wind. the inner space is sheltered and provides suitable conditions for replantation. as the structure and shell are 3d-printed with sand and salt, g-shell fabricates ‘well’ and ‘dwell’ with the resources available locally. 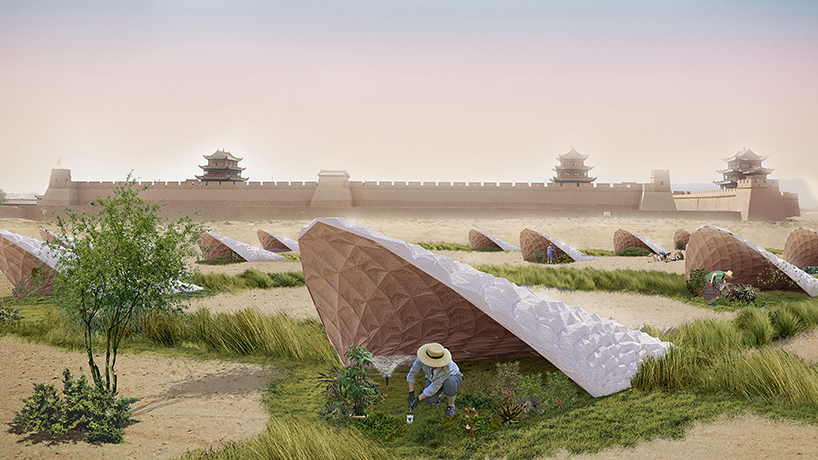 the oxygen towers operate as air purifiers. they are filled with air filters combined with wind turbines which improve the air quality in the highly concentrated pollutants. as a significant structure scattered around the city the design is based on russian architecture. 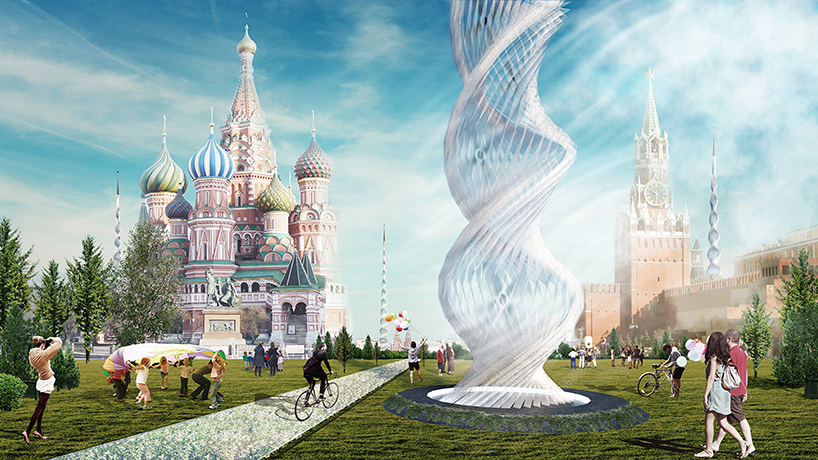 situated at the ratargul swamp forest, one of the few freshwater swamp forest in the world, in the north east of bangladesh, the water lilys will be able to store water during the heavy rainfall and maintain the water level in the dry season. the water lily site is a prototype for collecting and transporting water to the arid areas powered via the g-spine to balance the consequences of climate change. 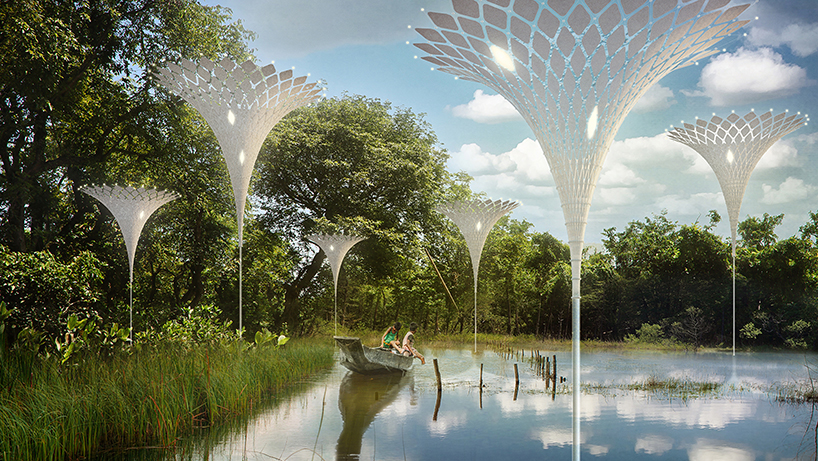 blizzard has been a intractable challenge in the province of wuhan, hubei. thus the blizzard blazer will release heat to melt the excessive snow from blizzard. it acts as a watchtower reporting climate change, inspired by the original function of the renowned yellow crane tower. 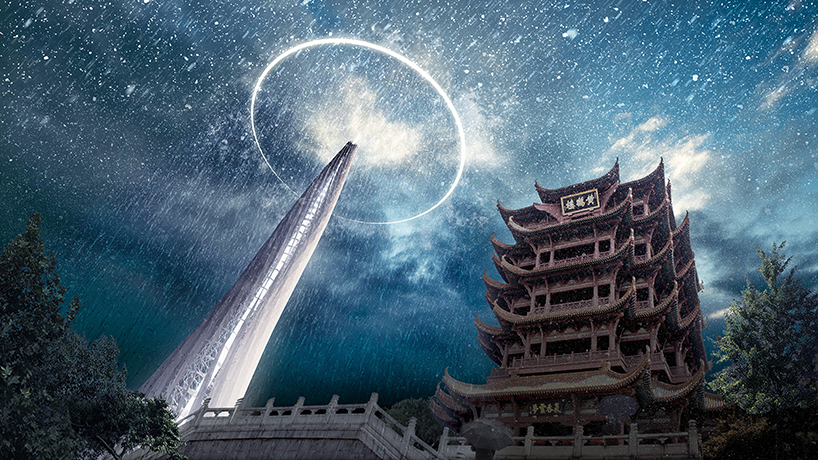 inspired by the historical silk road where goods are produced, acquired and exchanged among local merchants and traders trees are proposed as the new prospective currency. each tree correlates with a defined carbon dioxide capture and storage capacity. this new currency compasses the most important value shift of 21st century along and beyond the G-ROAD. 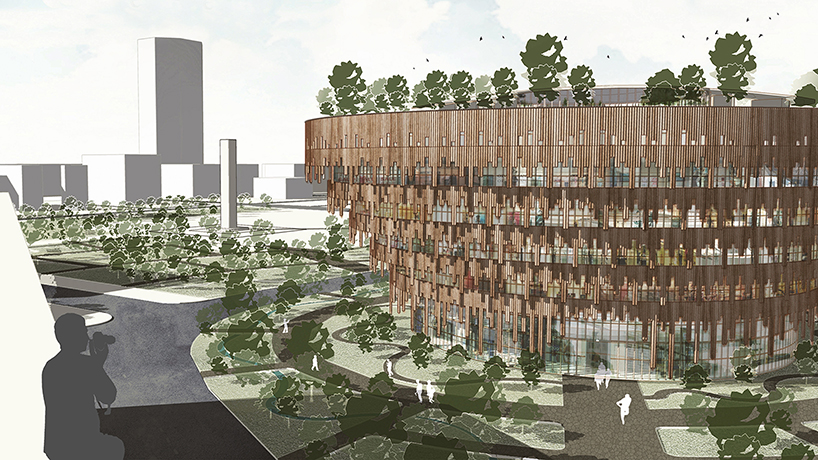 with electric cars at the forefront of automotive discussion, the g-charging pod provides a new concept for charging stations to healthily utilize public space. every g-charging pod design will appreciate nature using the closest available resources increasing their consciousness self and surroundings. 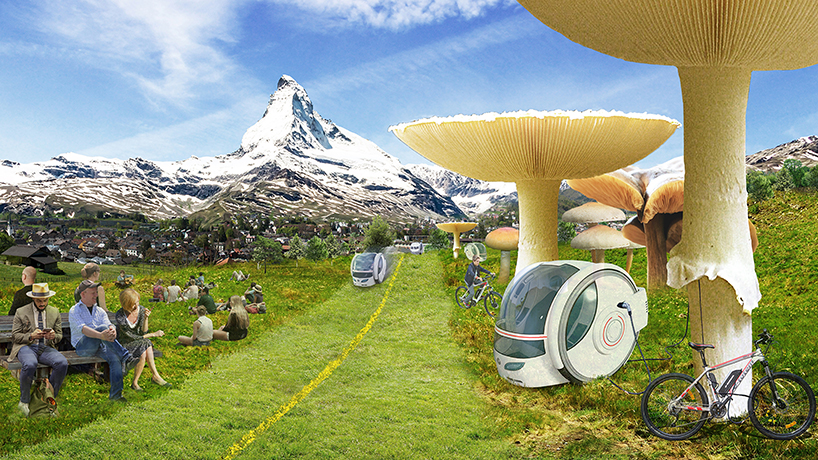 green health city in boao lecheng is a prototype for a new international, ecologically sustainable urban development with a focus on health protection and medical treatment. the urban structure aligns with local identity, taking into account the ancient (medical) chinese tradition. it is a prototype for a new green health infrastructure and an urban design strategy that paves the way toward future green city development. 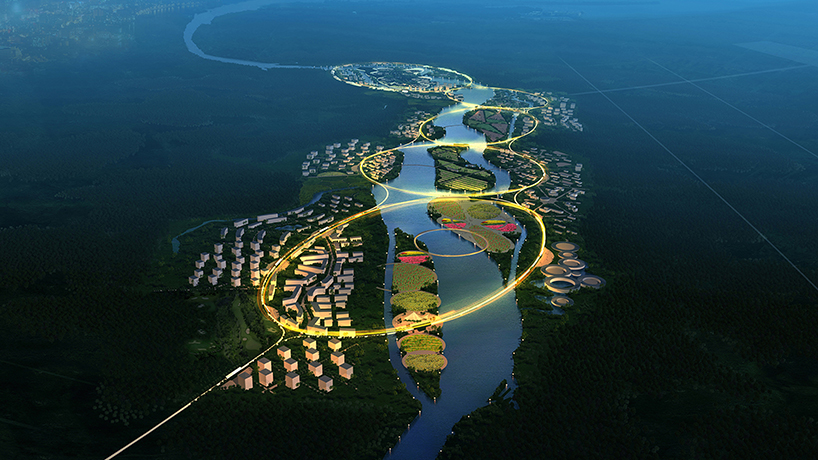 one potential future for our world is desertification. caused by climate change, which may lead to natural disasters and war, the G-ROAD is attempting to take a traditional water transportation system, and construct the karez’ towers to pump up underground salt water around the taklamakan desert. desalination water treatment for settlements inside a limited supply radius are developed as multi-function tower units and spread along the G-ROAD to ensure access to clean water. 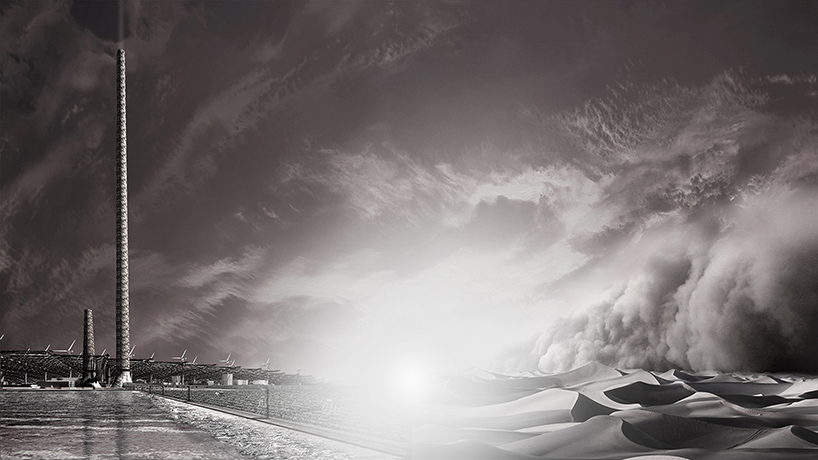 moving clinic reflects the G-ROAD vision on a holistic development including the living conditions in rural areas. made of recycled standard size containers, the moving clinics are able to service patients, mobilizing at any minute for users to receive immediate treatment with medical technologies and connect to specialists far away. 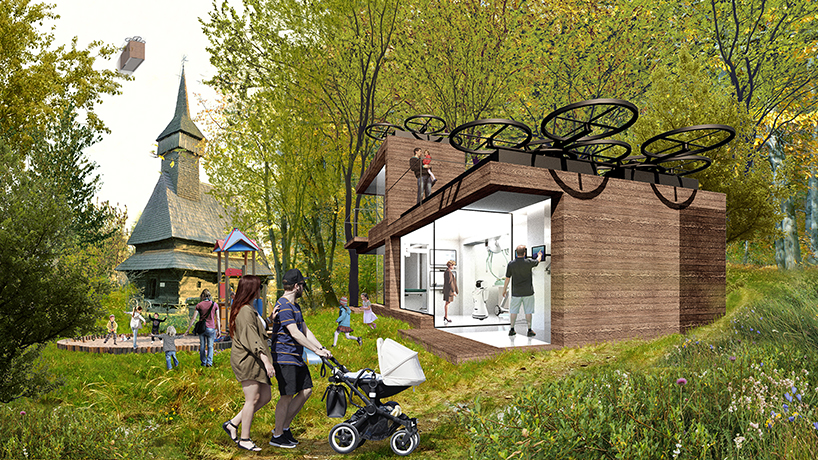 the concept was on display at the clb berlin exhibition in july 2018, showcasing the kind of innvoation that humanity needs to increase technology, communication, information to create a better world.