the ‘NDSM wharf’ is the historic remnant of amsterdam’s once-great shipbuilding industry. today, a creative city is developing out of the industrial landscape on the north bank of the IJ. the core of the former workshops is composed of the smederij, the timmerwerkplaats, the ramps, and the cranes. the smederij is a national monument that consisted of five smaller factories and a main forge. led by the architects of GROUP A, the transformation of the complex into a work environment for a variety of companies was commissioned by mediawharf monumenten B.V. 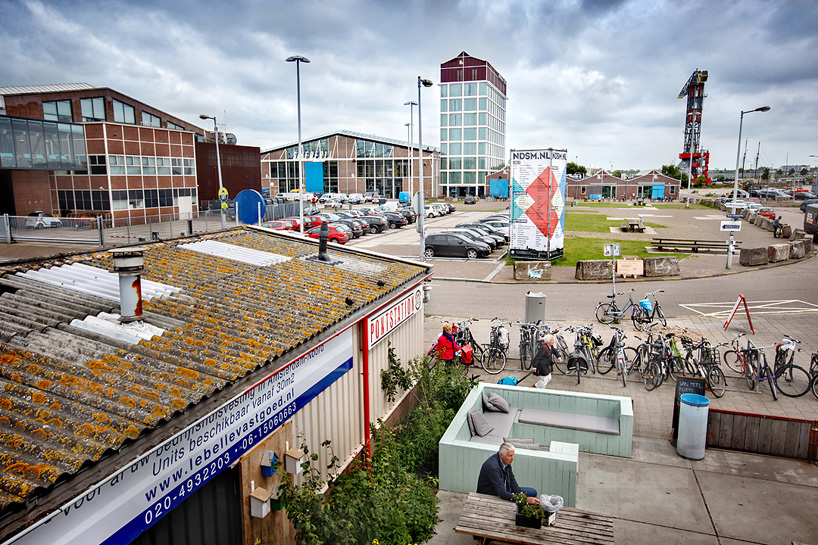 the core of the former workshops is composed of the smederij, the timmerwerkplaats, the ramps, and the cranes

as the firm see the forge as most authentic part of the complex, they retained the building’s industrial character by maintaining the monumental steel structure. the columns and trusses were only sandblasted and received no further treatment, which gives them a striking contrast to the clean, white elements that were added. a large wooden stairway and a 14-meter high atrium form the heart of the space. the original crane bridge used during the wharf’s days as a shipbuilding center still hangs here. the levels were returned to their original height, and the gigantic windows run from floor to ceiling, so that daylight can reach the ground level from the shed roofs. this low platform comprise office space and a public restaurant with a terrace facing the square. a stairway is located outside on the first floor with a view over the ramps and the IJ, which is used as an extra balcony by greenpeace netherlands, one of the tenants. the outer brickwork has been cleaned and left intact, so that the rough exterior remains visible. where bricks were missing, the hole was filled with modules from other sections of the wall. in addition, glass sections were installed where needed for the building’s new function. 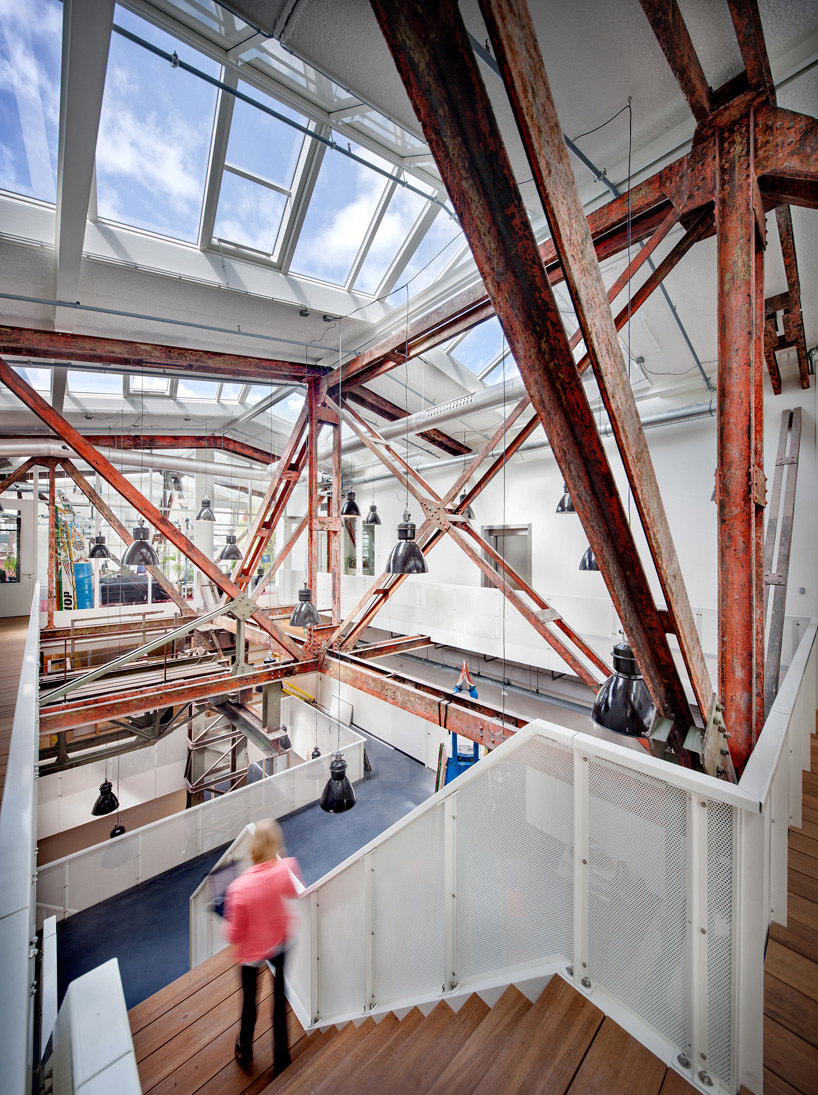 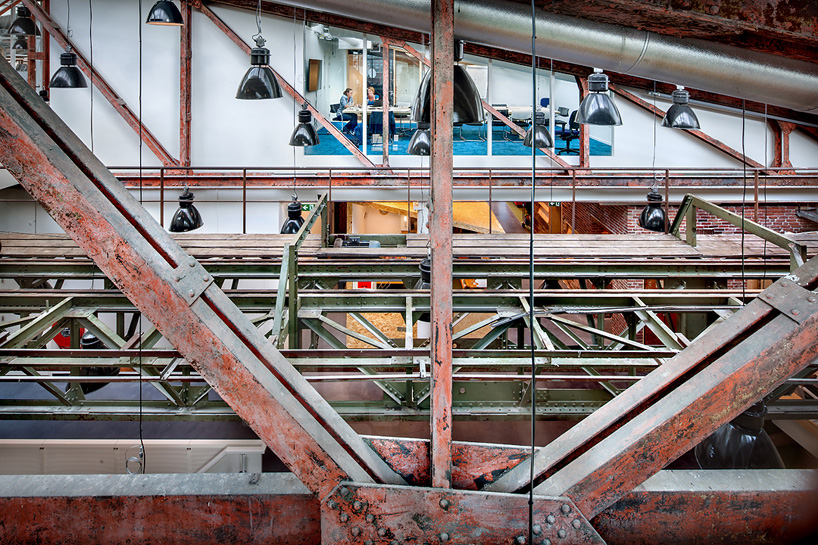 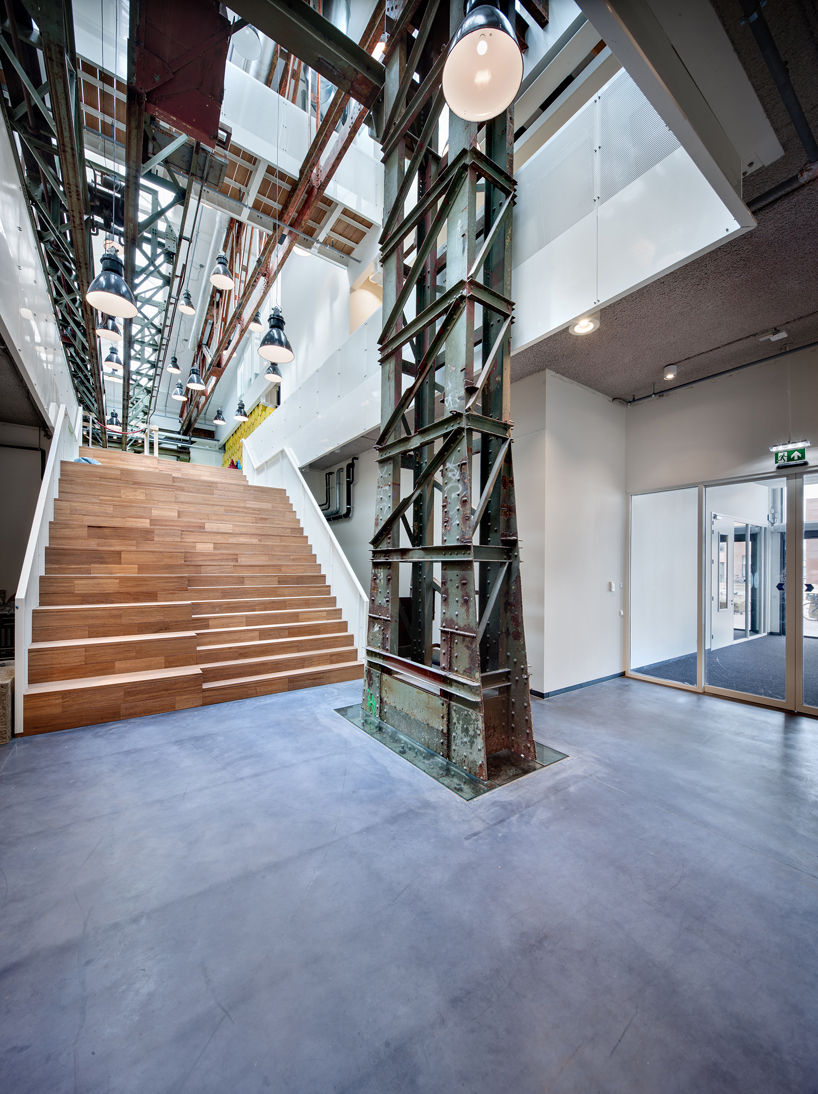 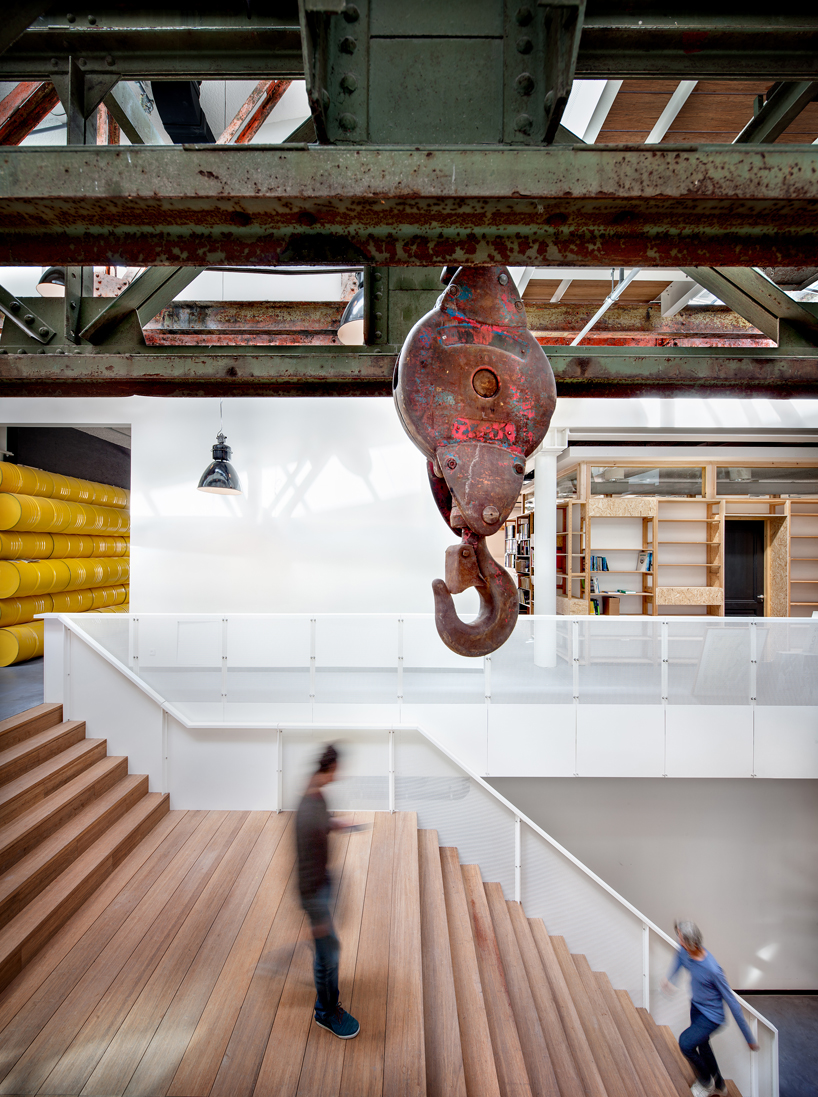 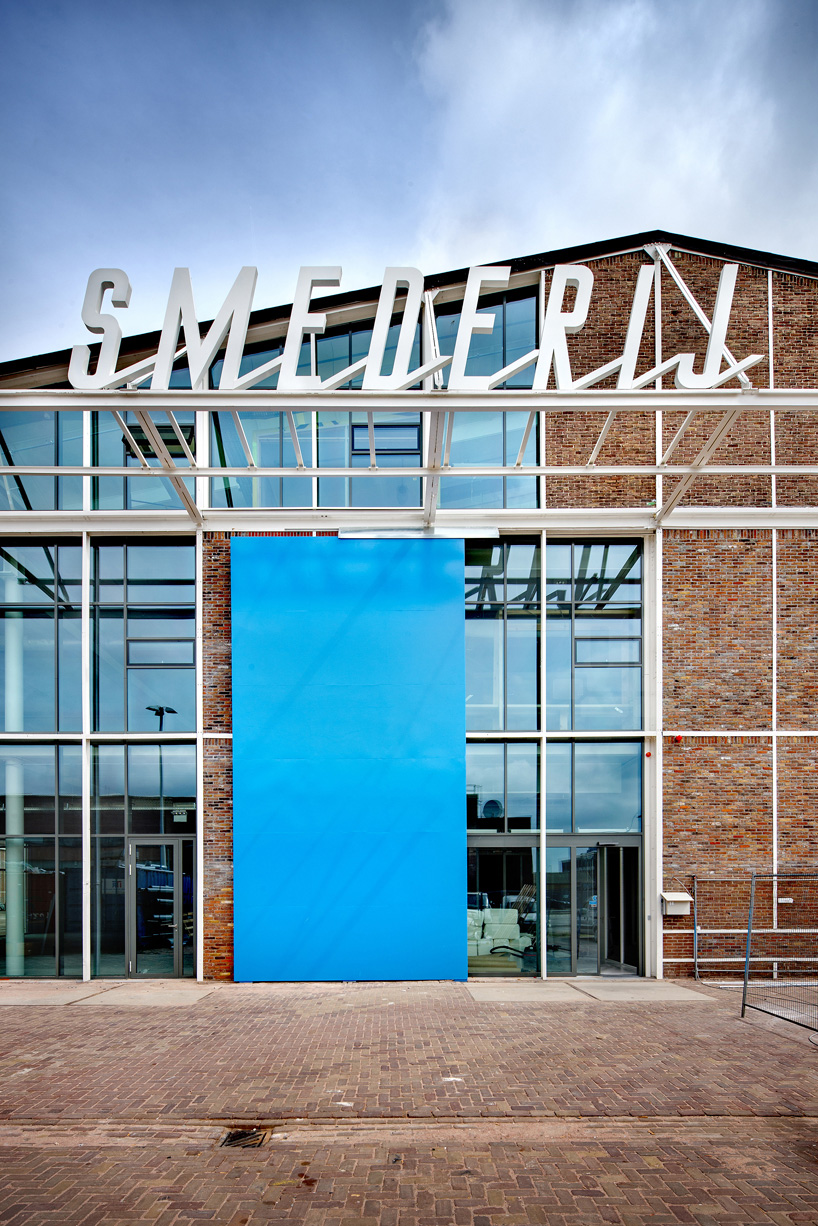 view of the blue high sliding doors that complement the surroundings

the hotel was constructed on the site of the last pitched roofed workshop left standing adjacent to the smederij. by lifting the surface up 30 meters, GROUP A created a tall, slim tower that serves as a beacon on the NDSM wharf. the top of the facility offers visitors a grand view of the amsterdam skyline. from an urban planning perspective, the project demanded a 360-degree design with a raised element, in order to create a stronger visual connection between the city and the quay. 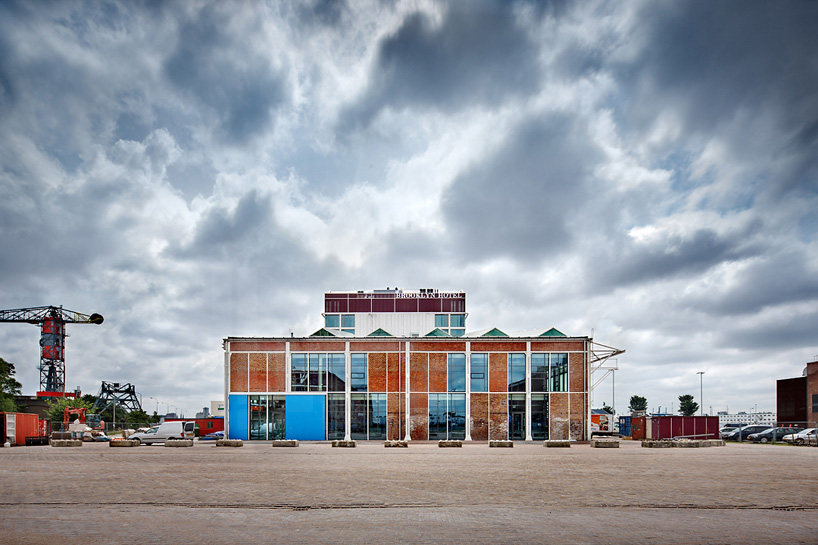 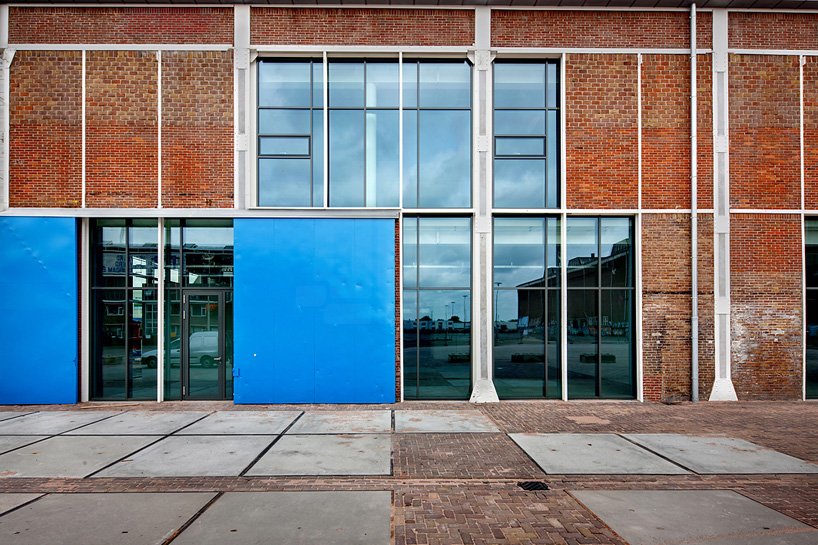 the outer brickwork has been cleaned and left intact, so that the rough exterior remains visible

the total transformation began in 2009, with the reconstruction of the four pitched roofed workshops. these were completed in 2011 and leased to become the main offices for red bull and fronteer strategy. at the time, the spaces were in such poor condition that the developers decided to demolish them and start over, using the steel roof spans for the new building. this allowed them to rebuild the structures in their original form, with their familiar industrial contours. by adding characteristic high sliding doors in the same shade of blue used elsewhere at the NDSM wharf, these buildings complement their surroundings. 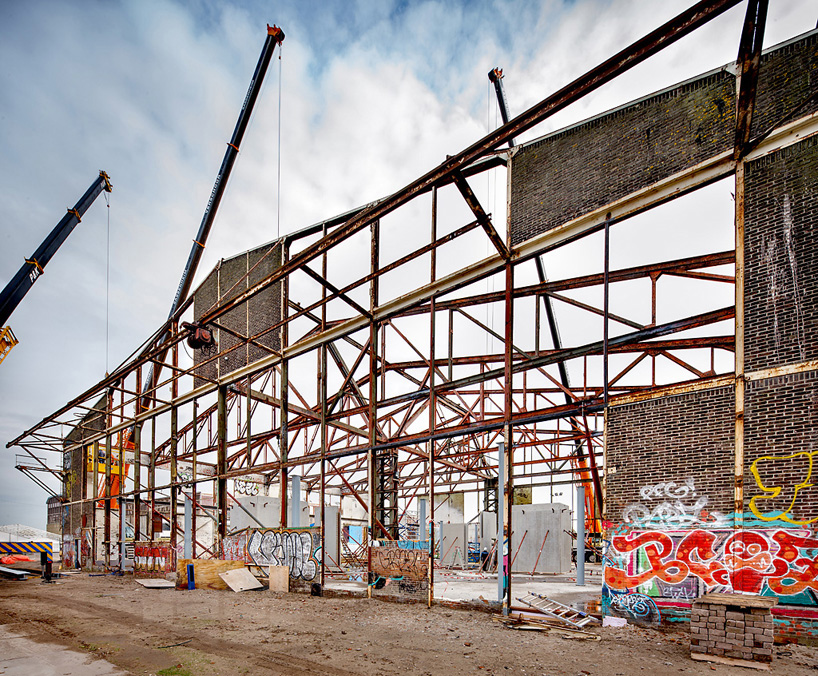 smederij under construction in 2013 showing the steel structure 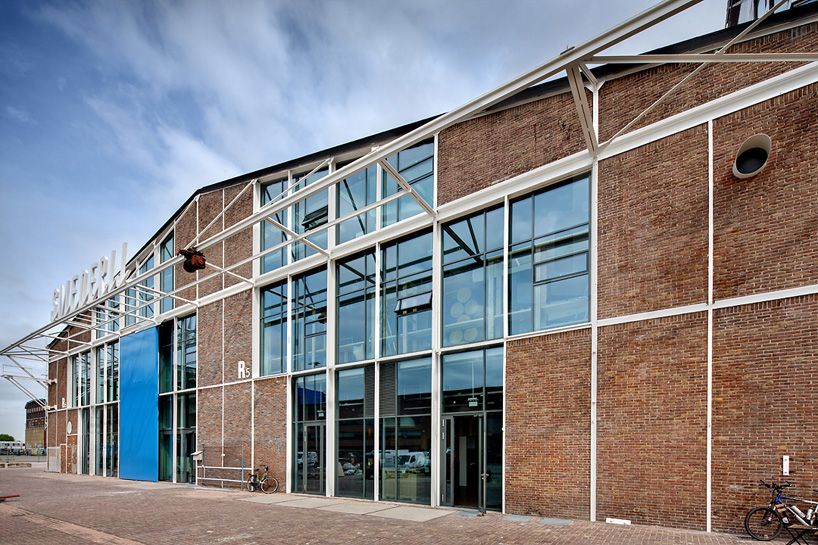 the renovation has breathed life into the smederij, restoring the soul of the original complex. the combination of old and new, light, space and steel turns the site into a place to work and relax in amsterdam. its flexible layout and ceiling heights of up to 4.5 meters make the spaces ideal for a wide range of business concepts. the architects say, ‘the finished product is a model of dutch industrial heritage, repackaged for contemporary office spaces and a hotel.’ 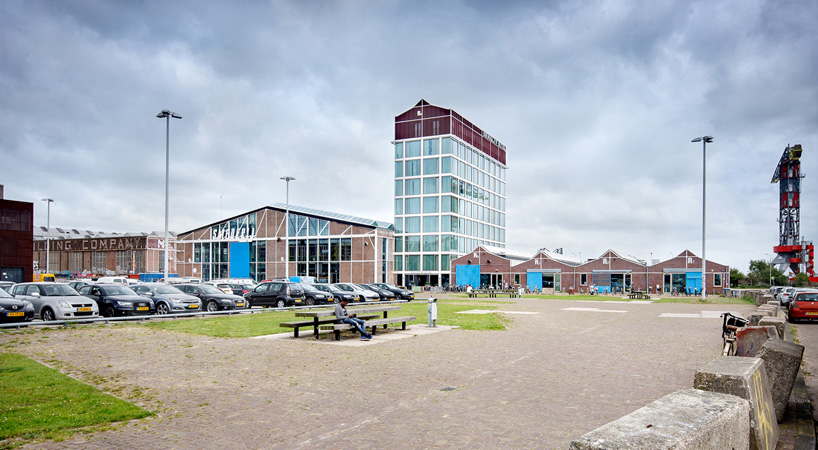 the completed project is a model of Dutch industrial heritage, repackaged for contemporary office spaces and a hotel