the architecture studio of héctor fernández elorza has unveiled its renovation of a 17th century abandoned chapel in spain. located in the municipality of jarandilla de la vera in cáceres, the revitalized structure is to be used as a community and cultural centre for the local population. 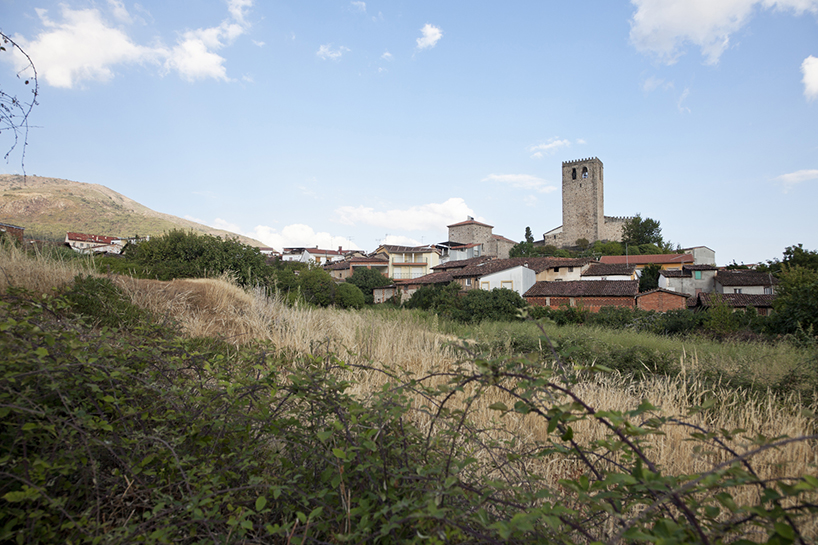 originally constructed in the 17th as a small chapel attached to the town’s church, the building’s structure has changed over time. in the 19th century is was used as a small prison, and in the 20th century, a school. héctor fernández elorza was tasked with renovating the structure to fit a flexible program of activities, to serve the ever changing needs of the community. 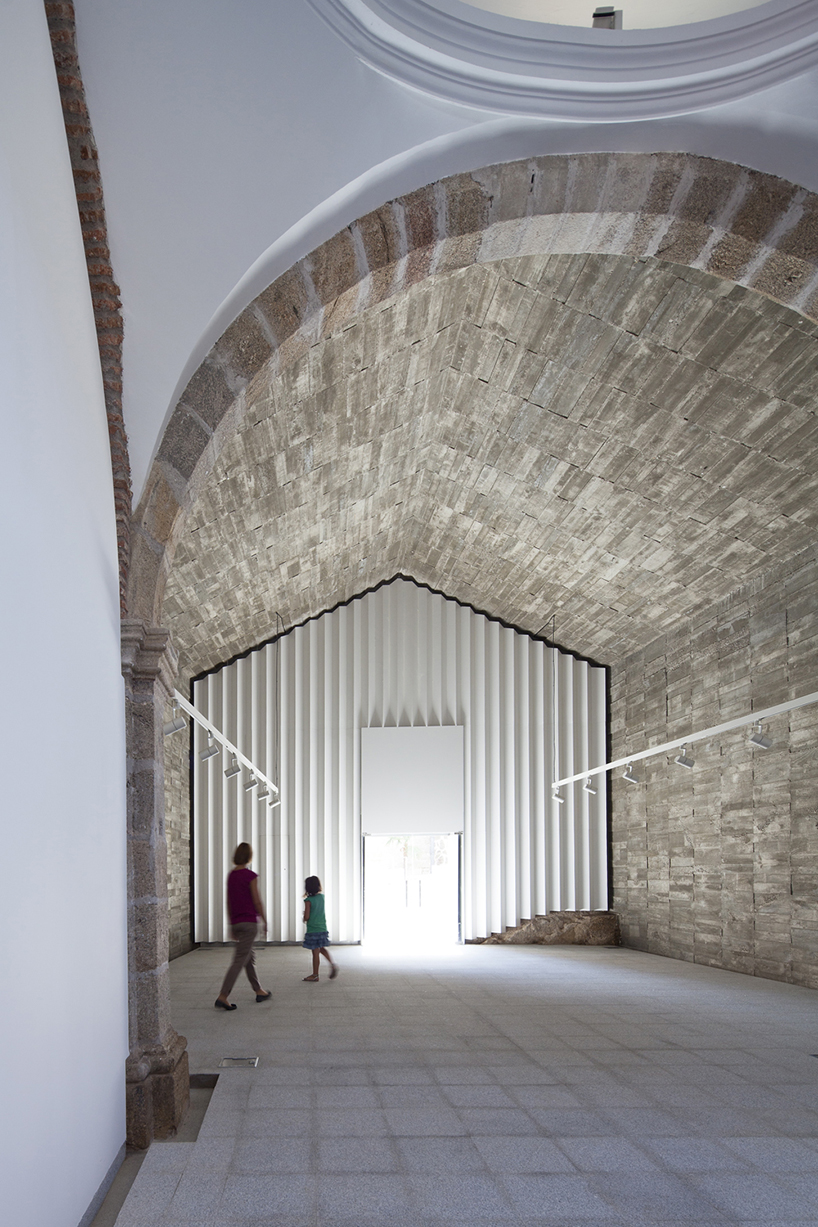 with barely 100 m2 and only one access from the small square, the chapel is divided into two volumes which configure into a single unitary space. the first and largest volume — the nave — has an irregular four-sided plan and a gabled roof, with its ridge placed perpendicular to the facade. the second, taller volume is placed to the back of the previous one, and used to be the apse. its high ceiling is topped with a semicircular dome covered by a hipped roof, with a central lantern installed at its peak. the link between both volumes is solved by a five meters wide circular granite arch. 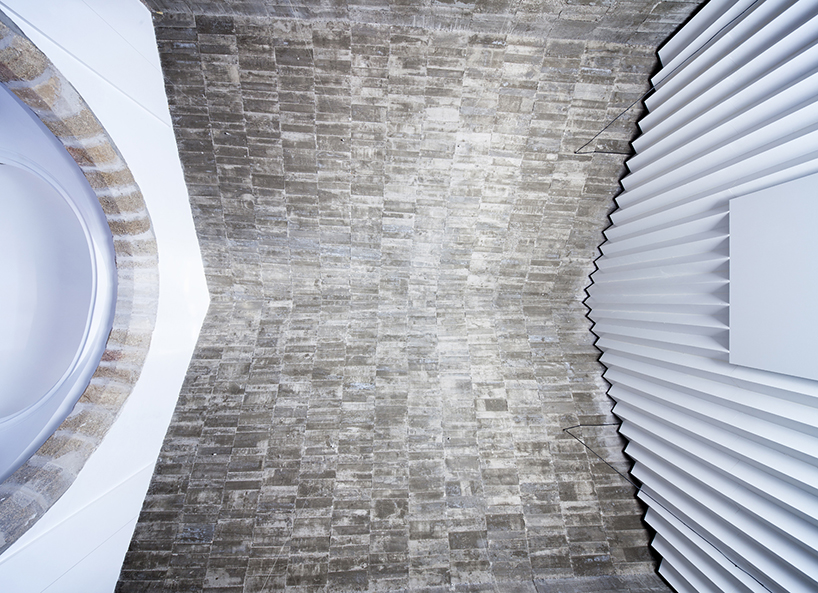 the restoration aimed to support the shortcomings of the original structure in an approach as subtle and unobtrusive as possible. this was achieved by incorporating an interior ‘shell’ — floor, lateral walls and covering — made of armored concrete, 25 centimeters thick. this element unifies the main volume and ensures the reinforcement and stability of the original perimeter walls. 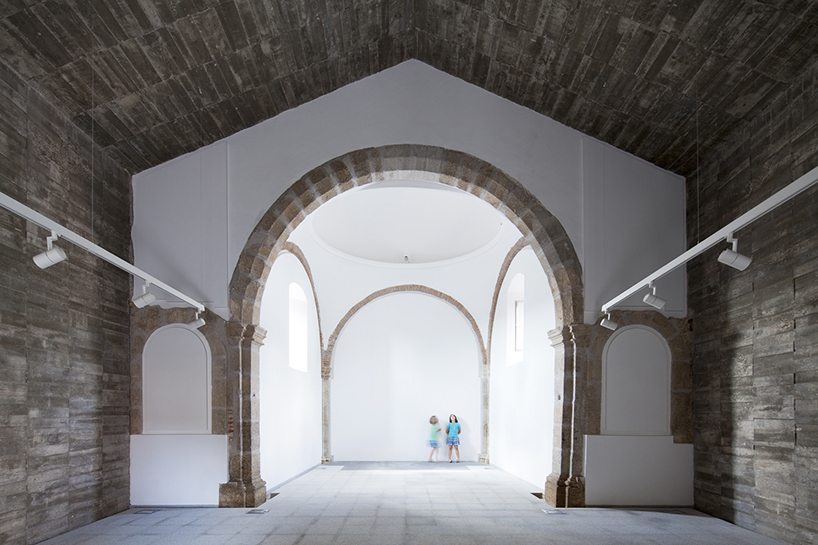 the apse lies at the back of the primary volume, and houses a lantern at its peak

the semi-circular dome’s lantern is modernised through the insertion of a stainless steel element that reflects the light into the interior of the second volume, the former apse. this element, plus the two lateral apse windows and the semicircular gap above the main entrance are the only ways to shine light into the chapel. the width of this arched main entrance enables a double door that allows a variable relationship between the exterior and the interior of the chapel along with variable illumination as well. 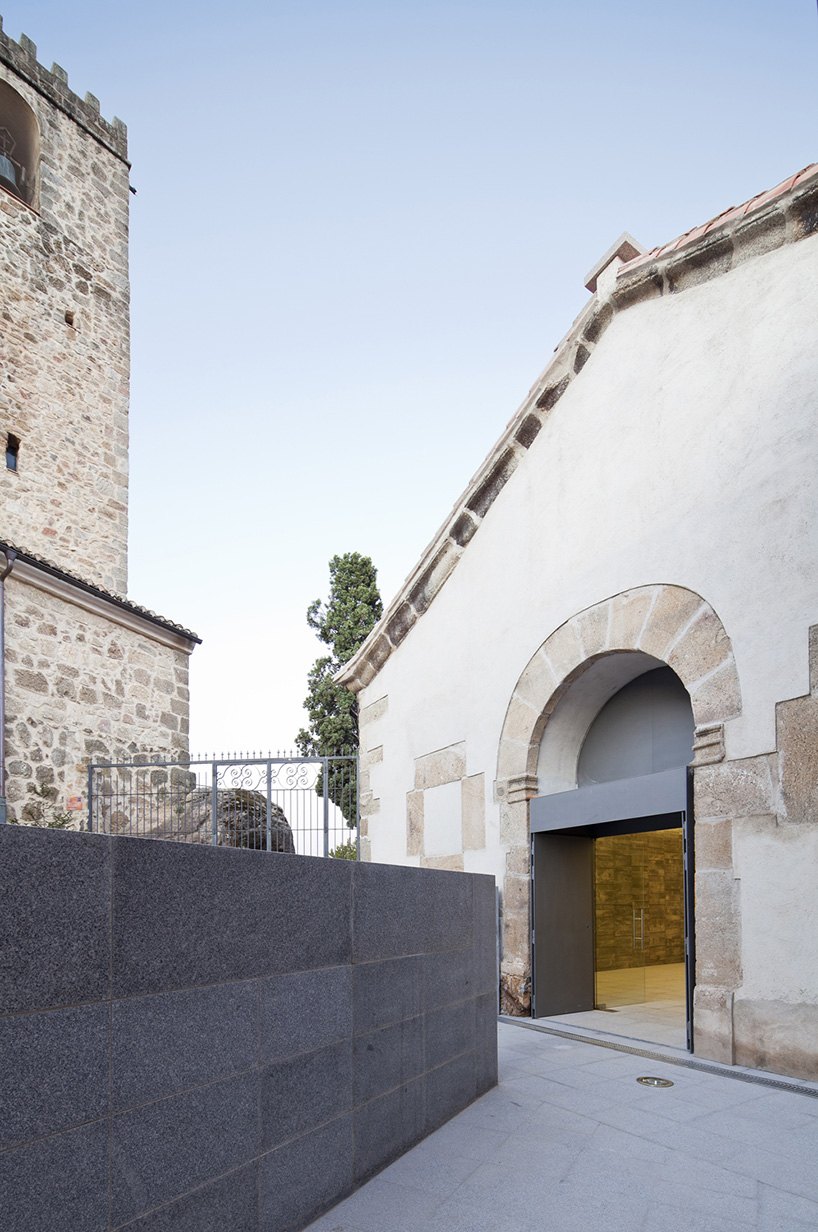 the entrance to the chapel is articulated through large granite walls

the interior of the façade walls are covered with solid beveled wooden pieces. placed in line with the concrete shell, they absorb and break secondary acoustic waves, dampening uncomfortable sound reverberations. the exterior presentation of the walls is cased in basic stonework and lime mortar plastering, with the granite floor finish of the chapel extending into the small square, inviting the outside in. the overall result is a cohesive blend of old and new that both looks to the future and longevity of the building while tipping its cap to the rich history of the chapel and its community. 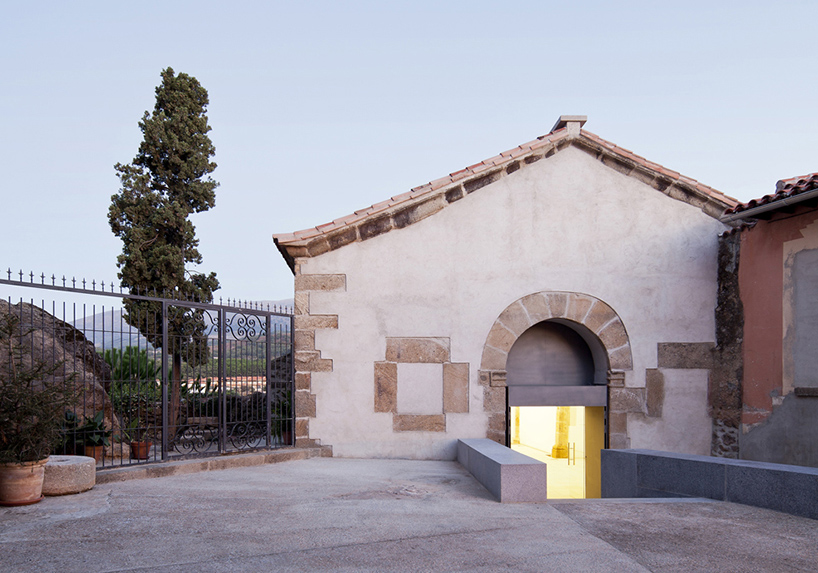 the chapel in its urban context 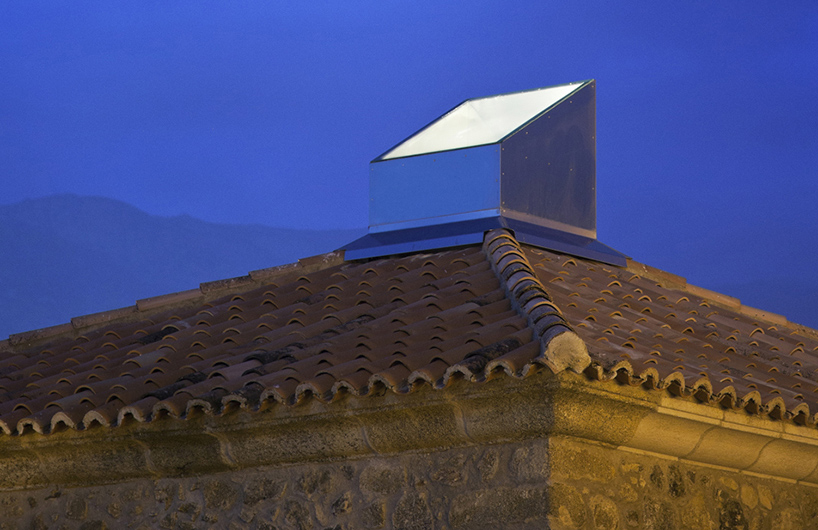 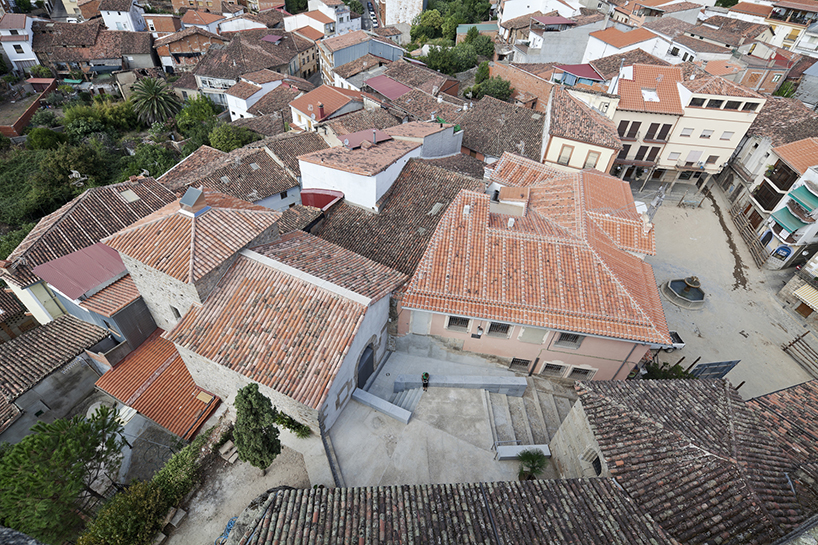 the structure was previously used as both a prison, and a school 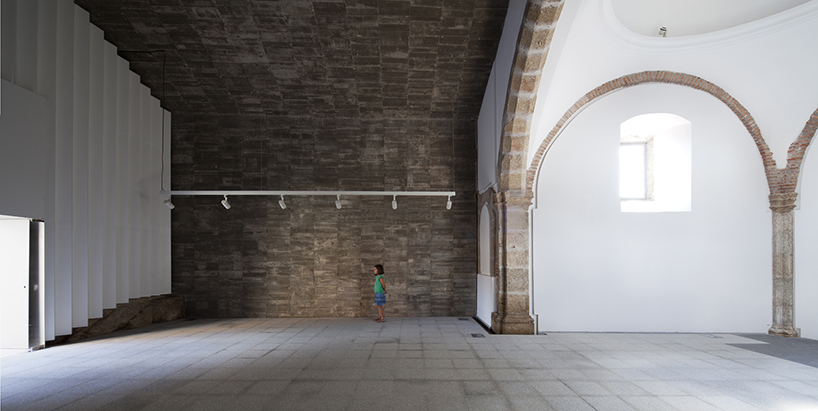 the two main volumes of the restored chapel

original state of the chapel 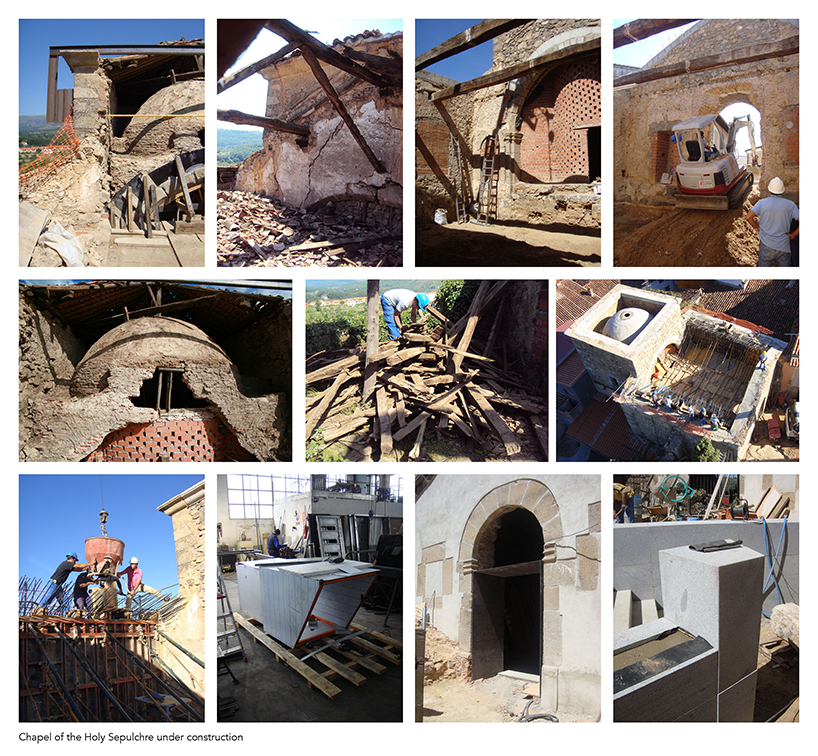