from may 1 to october 31, 2015, the italian city of milan will host expo 2015. over this six month period, the universal exhibition will showcase pavilions from more than 140 participating counties, all responding to the theme ‘feeding the plant: energy for life‘. as part of the global event, renowned swiss architecture firm herzog & de meuron has designed the ‘slow food pavilion’, a scheme that sees three built structures grouped around a central plaza. below, herzog & de meuron explain their project, which comprises exhibition, tasting and theater spaces.

‘when we quit our involvement in the further implementation and physical realization of our masterplan for expo milan 2015 we would never have thought to come back to that site with a real project. as much as we were convinced that our masterplan would be a good platform for the radical re-invention of what a world exhibition could be in the 21st century, we understood that the organizers would not undertake the necessary steps to convince the participating nations to give up on their conventional indulging in self-contemplation instead of focusing on their specific contribution to agriculture and food production.

‘also we knew of carlo petrini’s resistance to participate in a show that would rather give exposure to the big agro business companies than to his slow food movement. but carlo petrini has, since the beginning, been one of the most striking and interesting figures involved in the early planning and had therefore been one of the reasons of our own involvement. his radical intellectual and philosophical approach to the questions of biodiversity and food production was the main inspiration for our masterplan from where it could have inspired all national pavilions, public spaces and all other parts of the expo. 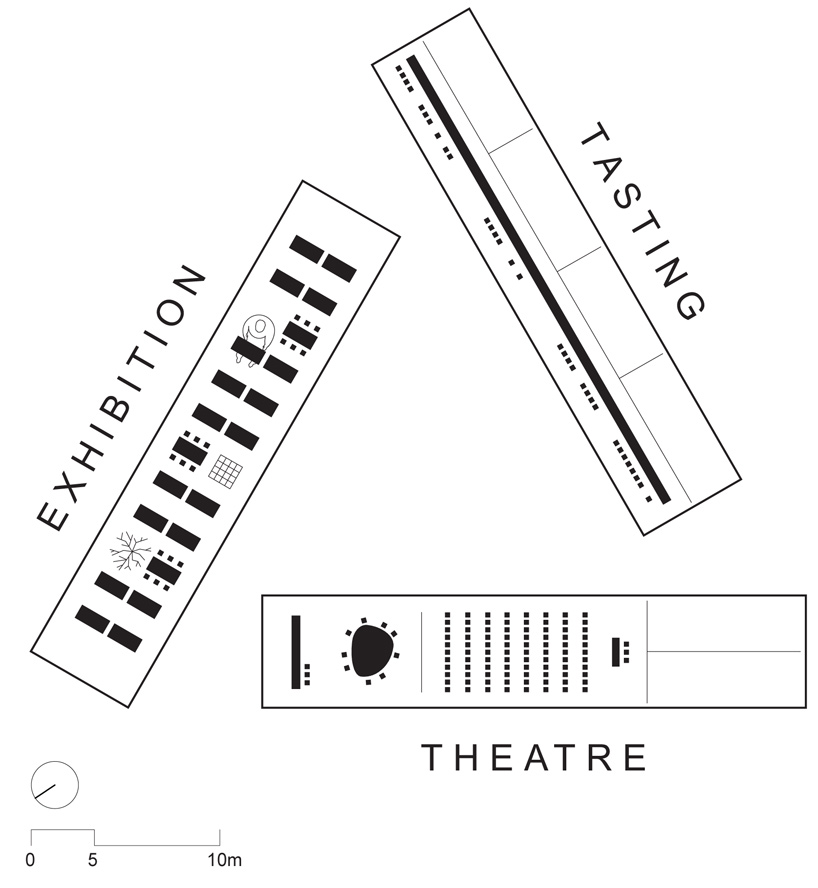 ‘we stopped working on the project in 2011 and to our big surprise started again in 2014 after having been invited by the organizers and after a phone call from carlo petrini who explained why he had decided to accept presenting slow food in a special pavilion, in a very interesting place within our masterplan of the exhibition. we had indeed always seen that place, a triangular piece of land at the very eastern end of the expo’s central boulevard, well-positioned to become one of the main public forums within our masterplan concept.the pavilion should allow the visitors to discover the significance of agricultural and food biodiversity, to explore the variety of the products that are protagonists of biodiversity, and to become aware of the need of adopting new consumption habits.

‘our architectural and curatorial proposal is based on a simple layout on tables which creates an atmosphere of refectory and market. people can watch visual statements and read key texts about different consumption habits and their consequences for our planet, they can meet and discuss with exponents of sustainable agriculture and local food production to learn about alternative approaches, and they can smell and taste the richness of agricultural and food biodiversity.

‘we designed three shacks, archaic, almost primitive wood structures that define the triangular space of an interior courtyard or market place. these shacks are long and slender buildings remindful of the lombardian farm house the ‘cascina’. after the expo they will be dismounted and reassembled as garden sheds in school gardens all over italy mentored by slow food with their initiative ‘orto in condotta’ as the principal national scholastic program for alimentary and environmental education.’  – herzog & de meuron, 2015