the new hylton performing arts centre at george mason univeristy by holzman moss architecture, is planned to become a classic auditorium that is located at the entry of the university campus and will act as a centerpiece for a larger culture complex. it will include a four level, 1,200-seat multipurpose auditorium, rehearsal space, and a 350-seat flexible theater and will be the home of the prince william symphony orchestra. the opera-style theatre will provide intimacy within the hall, as no seat is more than 75 feet from the stage. the hall which is also known as the ‘red room’, will be equipped with flexible acoustics, an exposed concrete structure, copper ceiling, natural wood and a rear perimeter wall. the lobby is a large glass area which hosts a staircase that wraps an 85-foot-tall copper leaf mural. copper is also makes up the prominent shape of the main theatre. 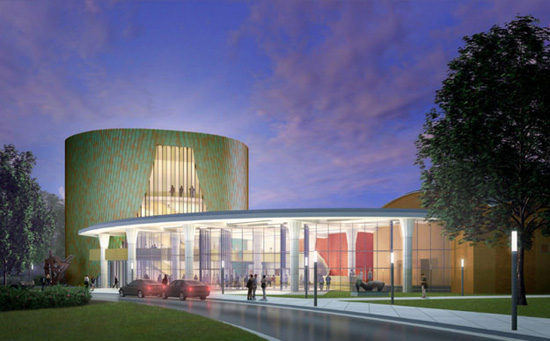 the centre is located at the entry of the george mason university campus in manassas, virginia image courtesy of holzman moss architecture

left: the large foyer with a staircase that wraps in front of a large copper leaf mural right: the smaller 350-seat theater image courtesy of holzman moss architecture

construction of the centre image courtesy of holzman moss architecture 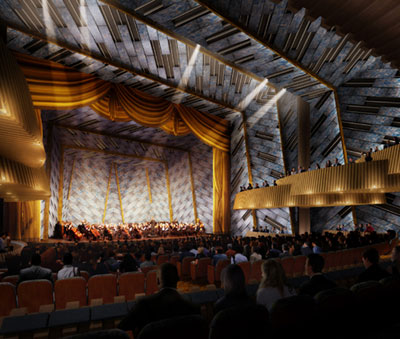