dupont underground, in partnership with the national building museum and the phillips collection, selected hou de sousa’s ‘raise/raze’ proposal as the winning entry for the re-ball! international design competition. the project was open to the public between may 1 and june 1, 2016. ‘raise/raze’ is a simple, lightweight and fully reconfigurable assembly block system. the concept stemmed from the re-ball! competition brief, which emphasized the re-purposing of a previously used material. over 650k plastic spheres were pooled together into a massive ball pit the previous summer at the national building museum as part of an installation titled ‘the beach‘ by architecture studio snarkitecture. the team admired that ‘the beach’ was essentially formless and allowed the public to fully engage it in a tactile way.

‘we wanted to continue these key aspects and sought out a design which could function as a dynamic and re-usable system of sculptural and democratic communication, rather than proposing a specific static form,’ comments hou de sousa. ‘we were also intrigued by the fact that there was a such a large, but finite, quantity of building material and that the public could take part in an observable demonstration of the law of the conservation of mass whereby creation and destruction are inextricably linked.’ in this way, ‘raise/raze’ works very similarly to a playground sandbox, or a real-world full-scale version of the popular video game minecraft. visitors can alter the objects and environment around them with ease, with the consequence being that everything new is built from what was there before it. 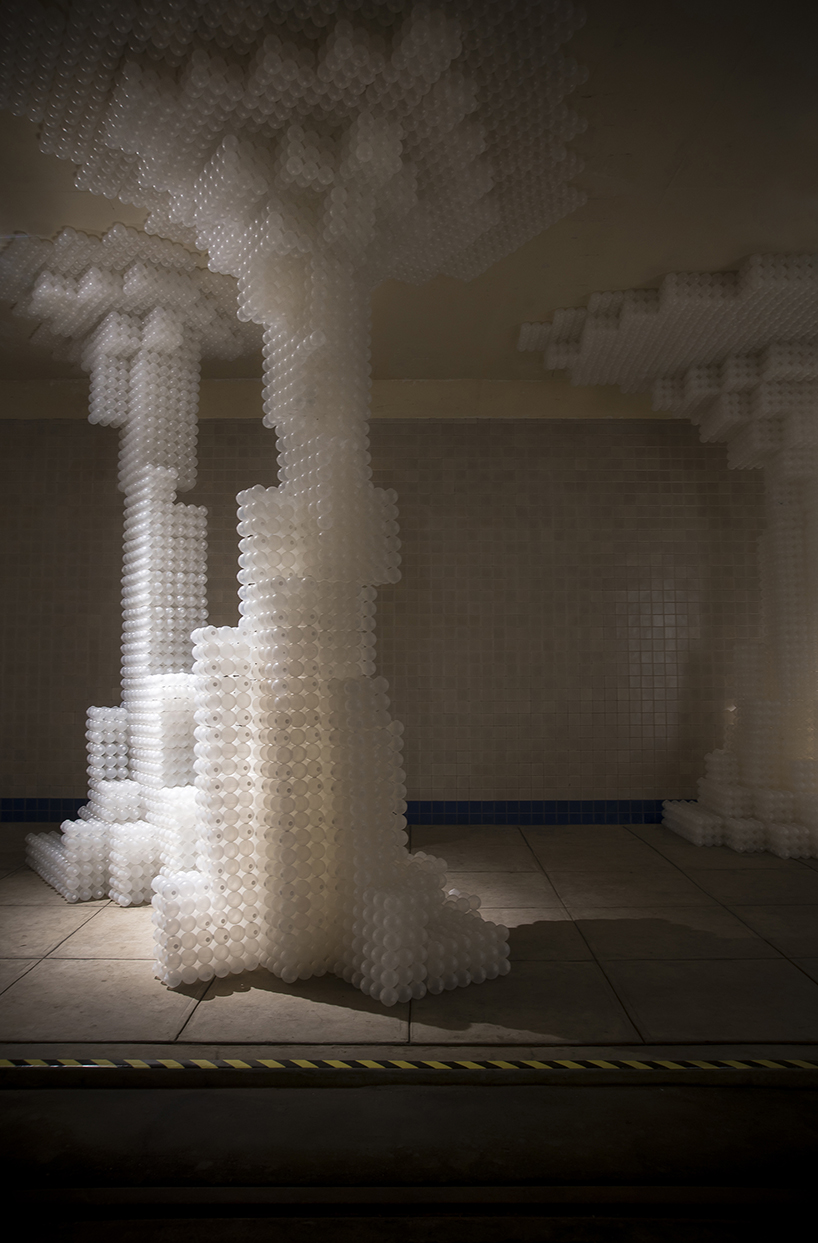 a pair of trees stretching between ceiling and floor

following a series of material tests and experiments with various adhesives and magnets, as well as several mock-ups, the team arrived at a 27 ball cube that is fused together with hot glue and attaches to neighboring cubes using hook and loop fasteners at the corners (velcro is the more commonly know proprietary eponym). larger cubes were also tested, but the 27 ball version had the distinct advantages of weighing less, being easier to build, and providing a finer visual resolution. although not featured in the project, one of the larger cube studies is noteworthy in that it consisted of hexagonally packed layers, which resulted in hundreds of additional connections, and thereby increased its strength to the point that an adult can stand on top of the cube without damaging it. 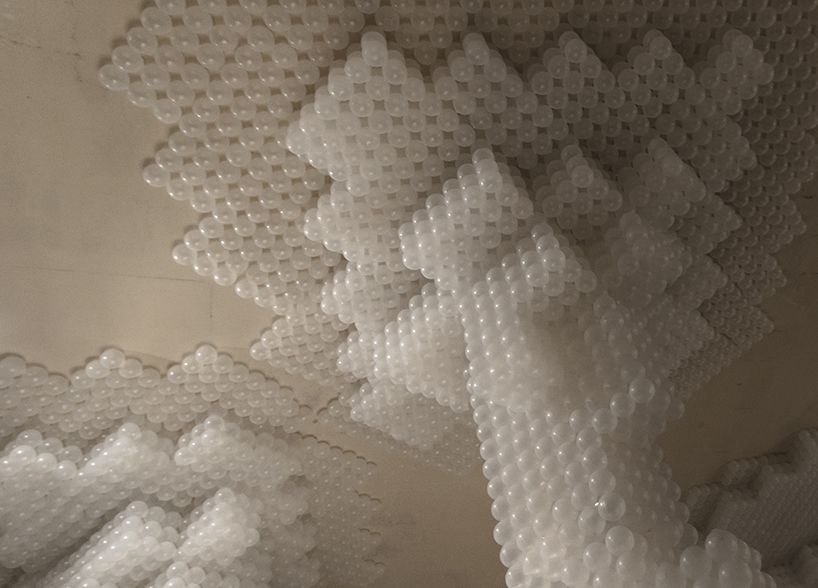 dupont underground is a long and narrow curved tunnel that previously served as a street car trolley station below dupont circle. because of this, an inhabitant’s view of the space is always limited, as there is no clear line of sight in which the entirety of the space can be observed. it’s an intriguing spatial characteristic; straight tunnels appear infinite and daunting in comparison. our proposal further compartmentalized the existing space into a series of zones which presented visitors with unique situations and scenarios, while also reconfiguring how one circulates through the site. 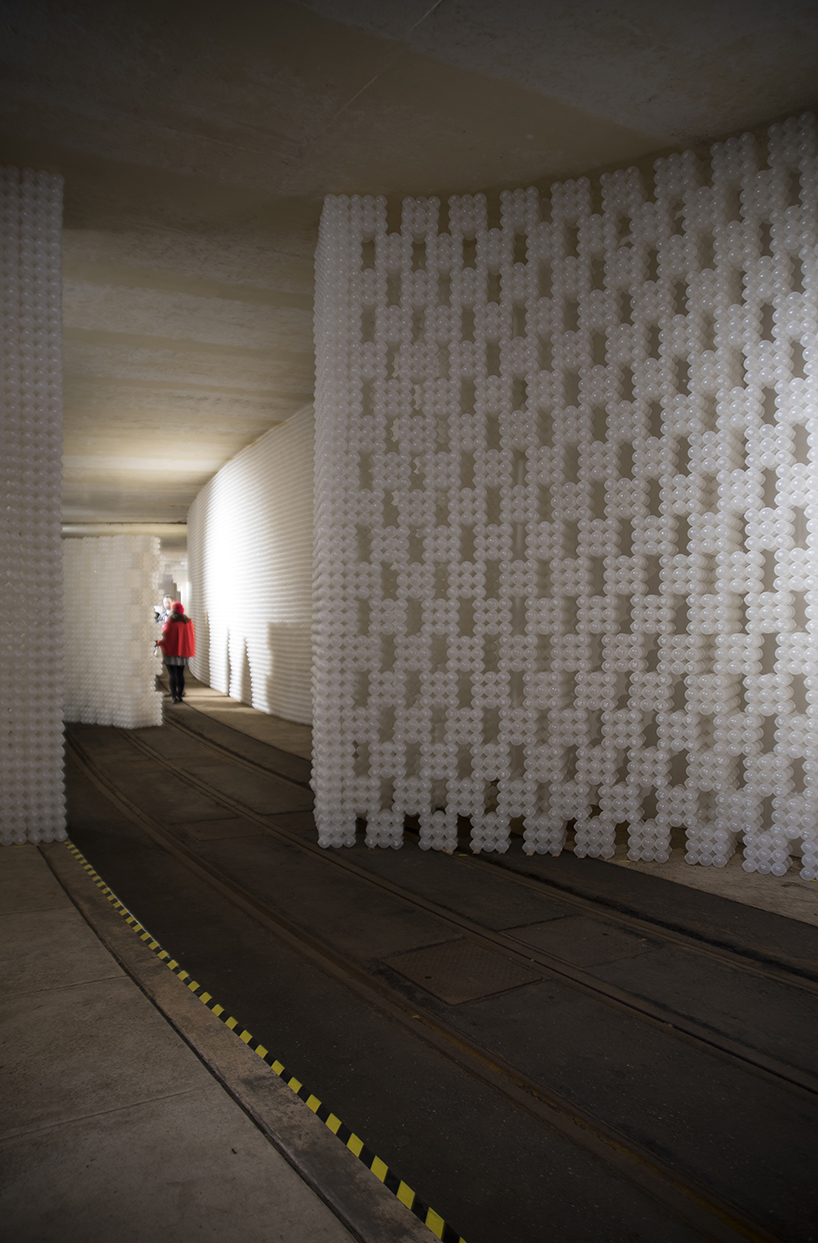 ‘raise/raze’ was popular both during construction and when it opened to the public. over a 1k people volunteered to build approximately 12k cubes in 4 weeks. 324k balls were glued into cubes which required 648k dabs of hot glue and 288k hook and loop coins. hou de sousa was delighted and stunned by the public’s embrace of the project and how much people enjoyed helping make ‘raise/raze’ happen. there was a festive atmosphere throughout and most volunteers were surprised by how satisfying and therapeutic it was to assemble the cubes. the ‘cube factory’, as it became know, was even a hotspot on several dating apps and sites. tickets for the month-long event sold out the first day. 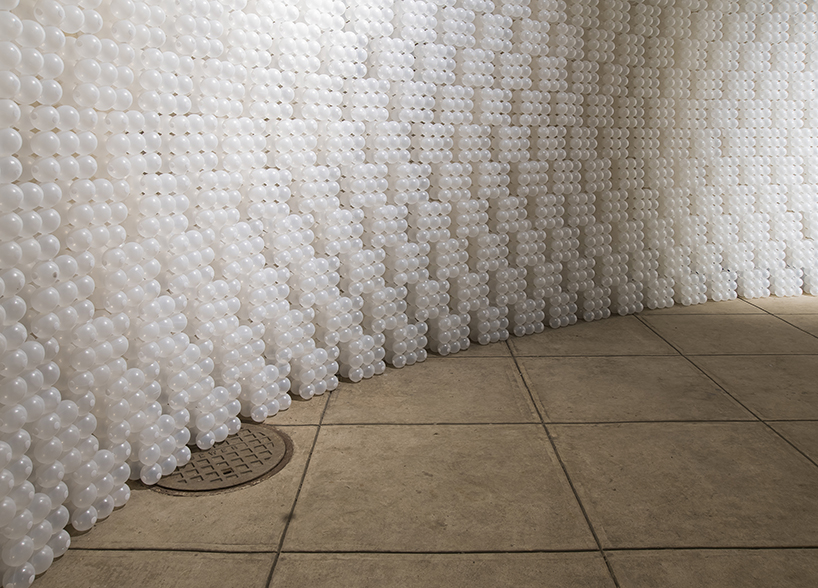 cubes were staggered and pivoted to form curvilinear walls

‘it was fascinating watching the public interact with the installation. many collaborated on building large-scale sculptures, while others went it alone. some relished destroying while others blissfully put the pieces back together.’ concludes hou de sousa. ‘houses, chairs, and animals trended heavily, igniting competitive spirits but others created singular and unpredictable pieces, blind and deaf to the buzz surrounding them. for a short while raise/raze transcended plastic balls and glue and became a mirror.’ 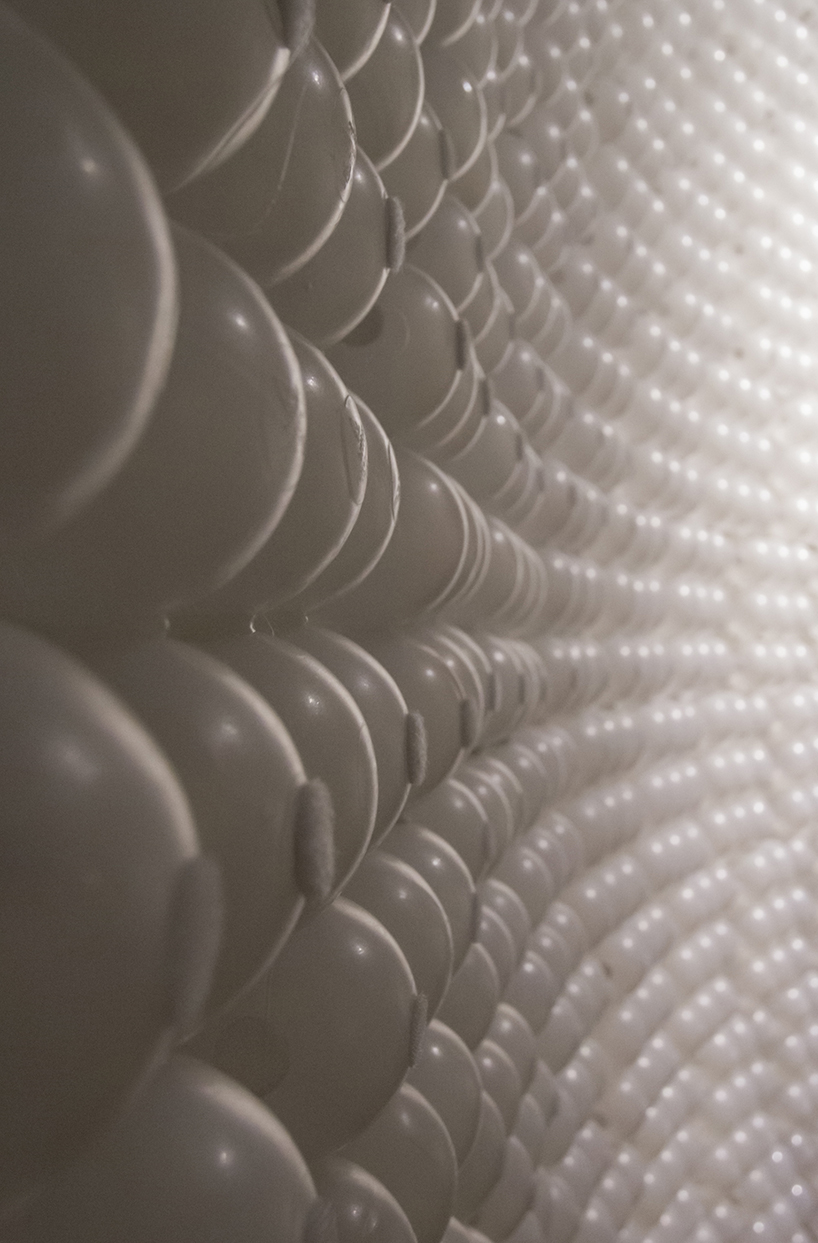 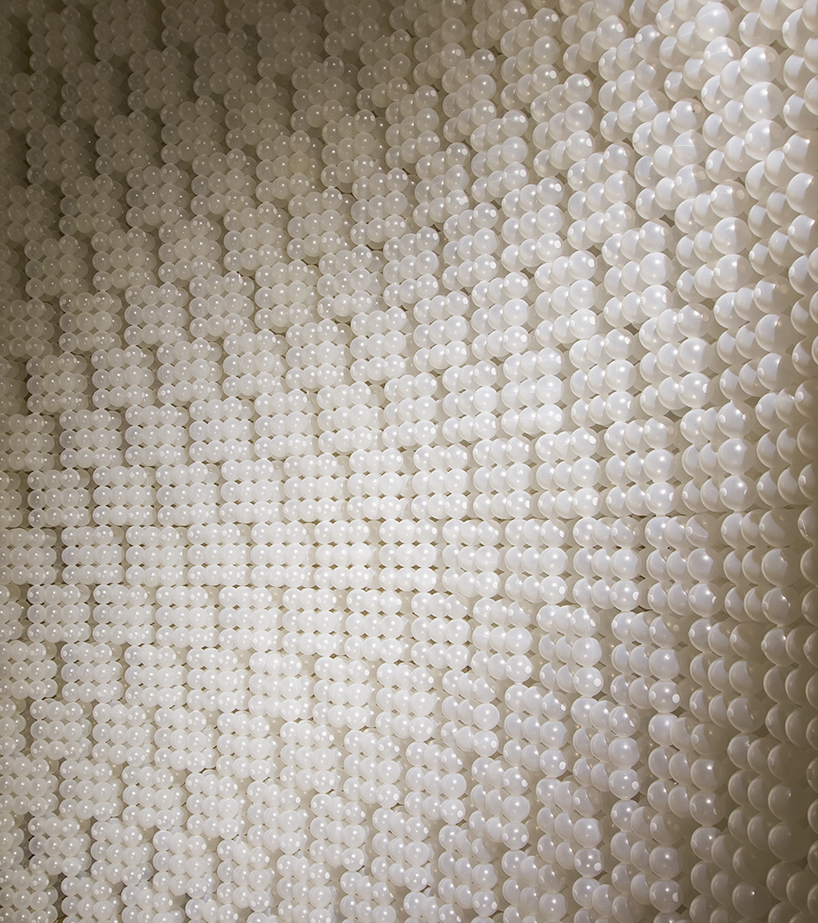 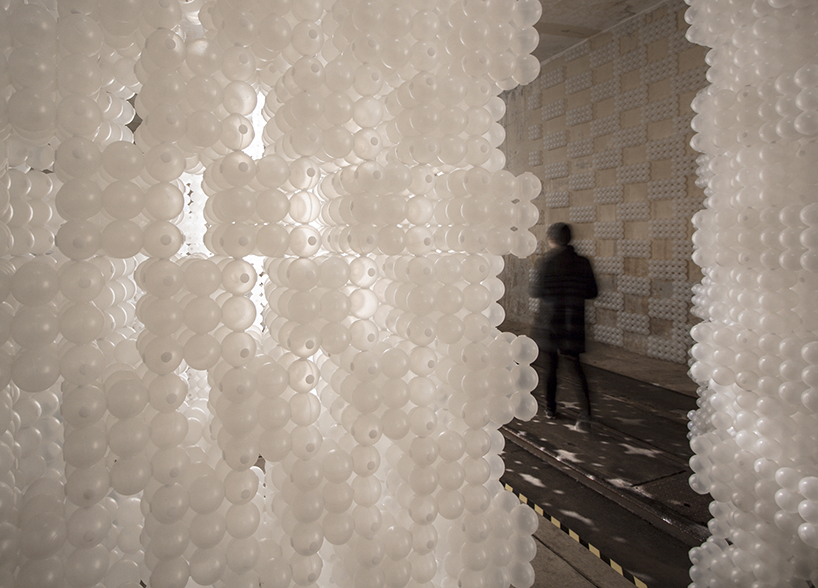 entry leading to the colosseum 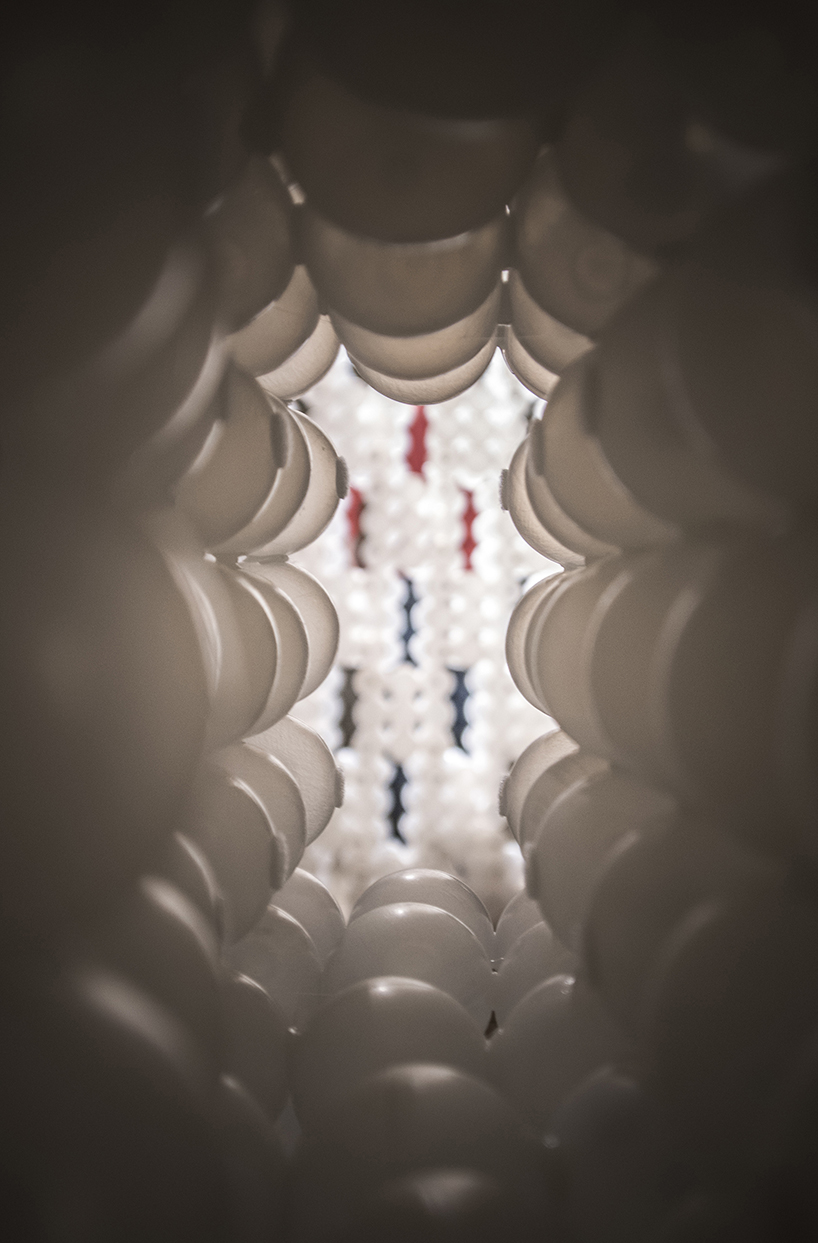 looking through the porous wall 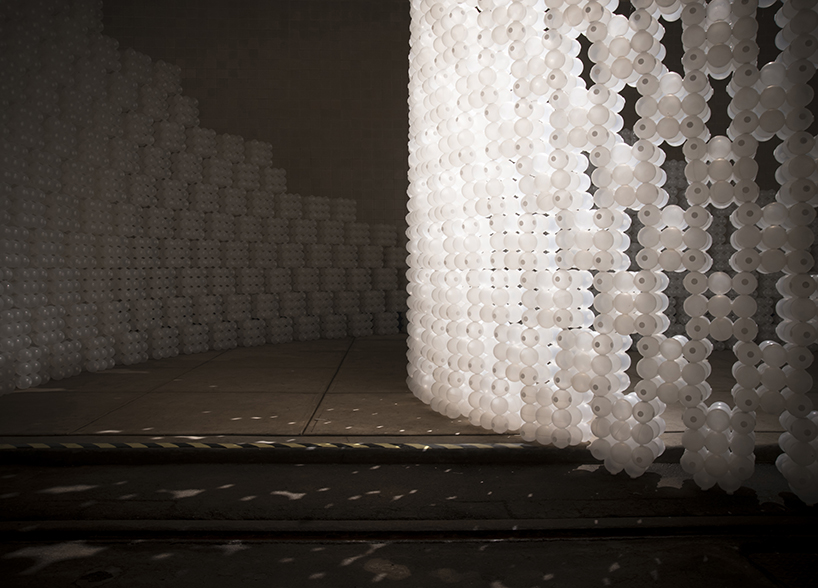 the base of the colosseum 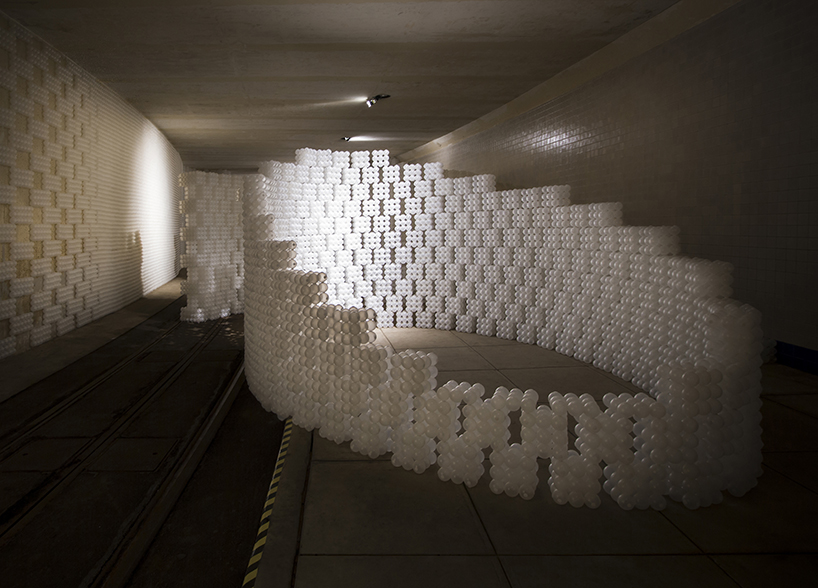 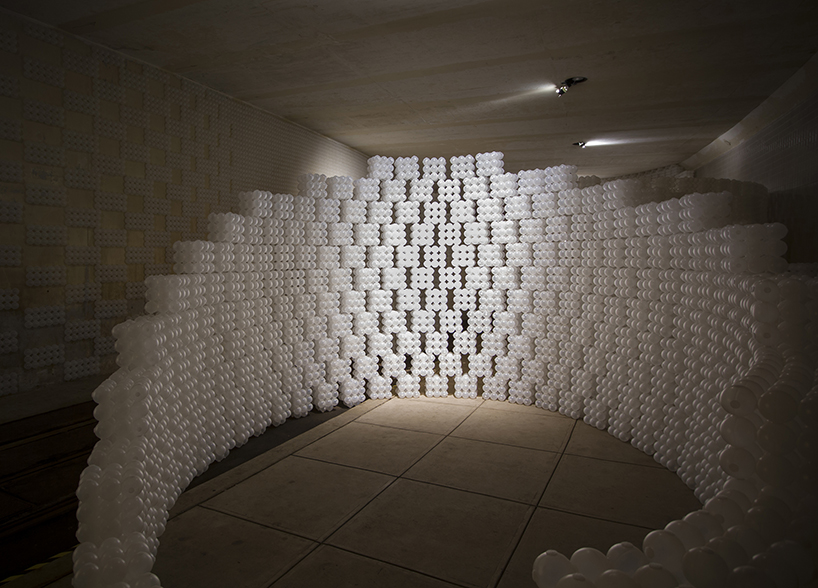 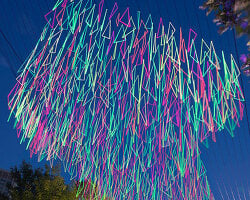 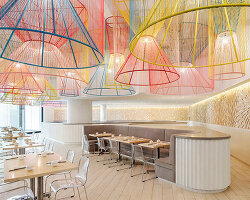 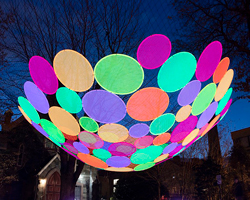 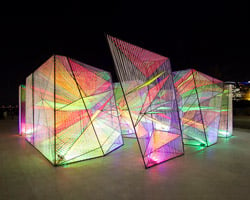