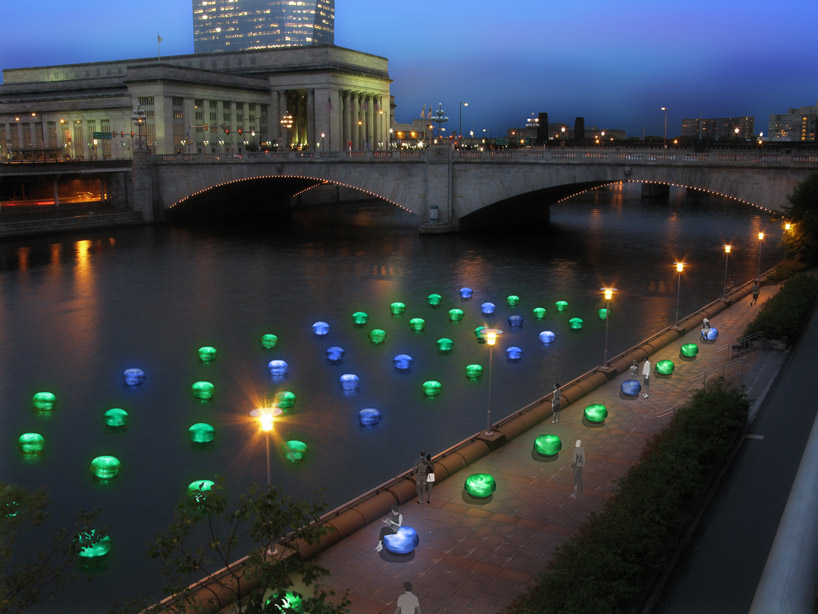 ‘light drift’ by howeler + yoon architecture is a temporary interactive lighting installation along the edge of the schuylkill river, pennsylvania, that will draw viewers into a playful engagement with the artwork, the river’s edge, and each other. the project creates a field of lighting elements that are arrayed along the waterfront, with elements on land and in the water. 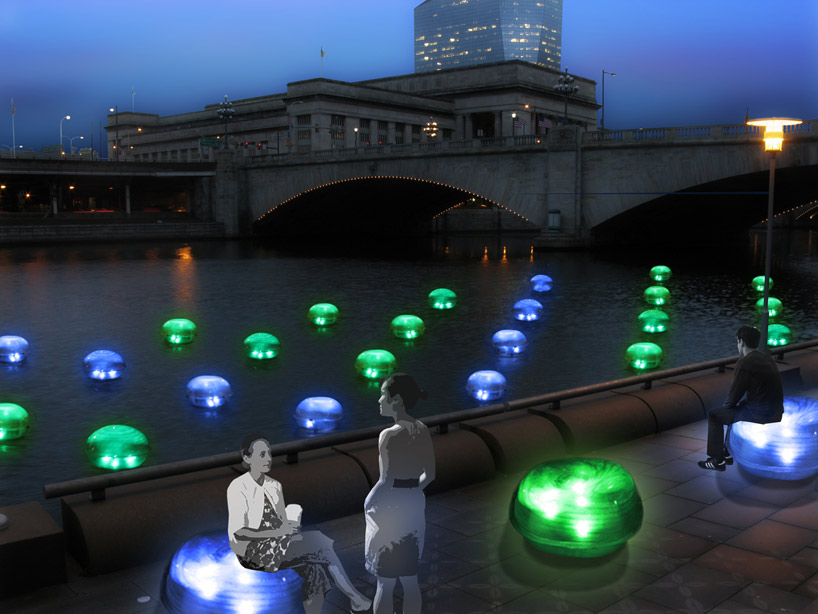 the lighting elements are shaped like orbs or buoys and are equipped with electronics that allow them to respond to a viewer and to communicate with each other. the orbs on land use sensors to detect the presence of a person and relay a radio signal to the corresponding orbs in the water, allowing visitors to transform the lighting behavior and color of the orbs in the river.  as viewers engage and occupy the orbs along the park, the grid of lights in the water becomes an index of the activities on land. multiple viewers can create intersections of linear patterns, encouraging viewers to ‘play’ with each other. these orbs bring the community together by providing gathering spaces for watching the river turn into a flickering constellation, creating new connections on the river’s edge. 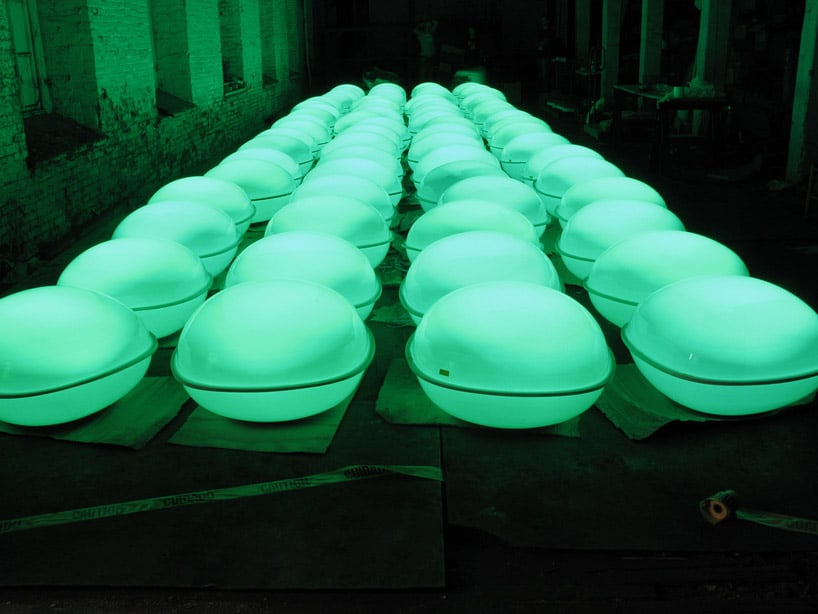 ‘light drift’ creates an atmosphere, a field of lights that transform in color and intensity based on the public interaction with it. the resting state of the field is a constant state of green. when a visitor approaches a land orb, the orb will start an ‘enticement mode’ by pulsing between blue and green. if a visitor sits on the orb, the pulsing will transition to a blue state. the water orbs that align with the land orb, will change colors at the same time, creating a linear extension of blue  lights in the water. because the orbs are arranged on a diagonal grid, the lines of lit orbs will form a series of intersecting lines in the field. the intersection of lines of lit orbs in the water will encourage different people interacting with the orbs to also  interact with each other. 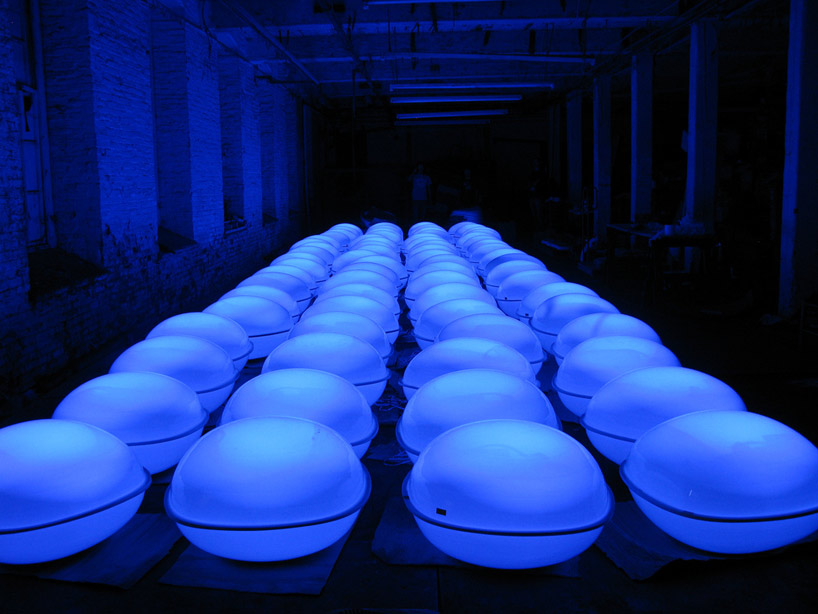 the individual elements are vacuum formed translucent shells molded from PETG (polyethylene terephthalate glycol). PETG is a non-toxic and fully recyclable material that is milky in color, easy to mold, and acts as a diffusing element for the lighting inside.the electronics consist of custom micro controllers and wireless transmitters (which use radio frequencies to transmit and receive data), allowing each orb in the field to be addressable, and specifically controlled by transmitters on the land. led (light emitting  diode) lighting allows the orbs to glow and change colors. led lighting is one of the most energy efficient means of lighting. 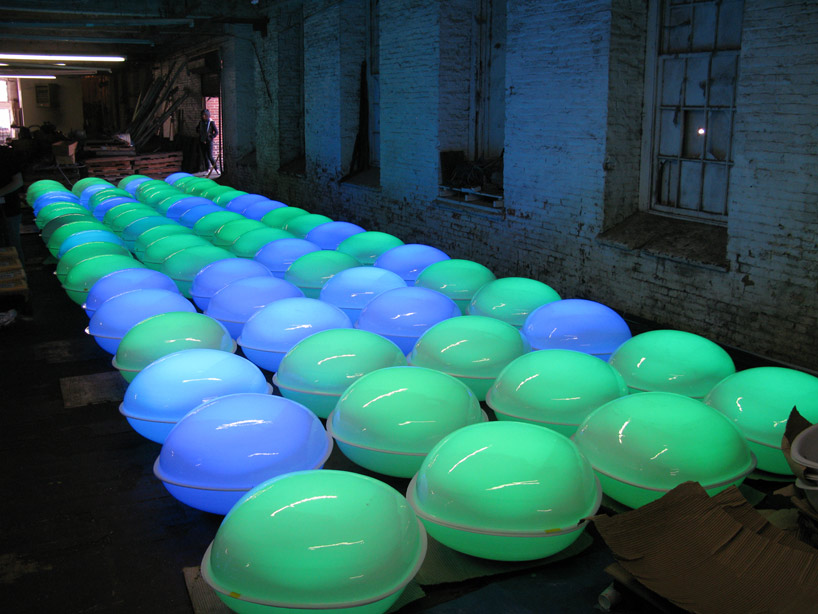 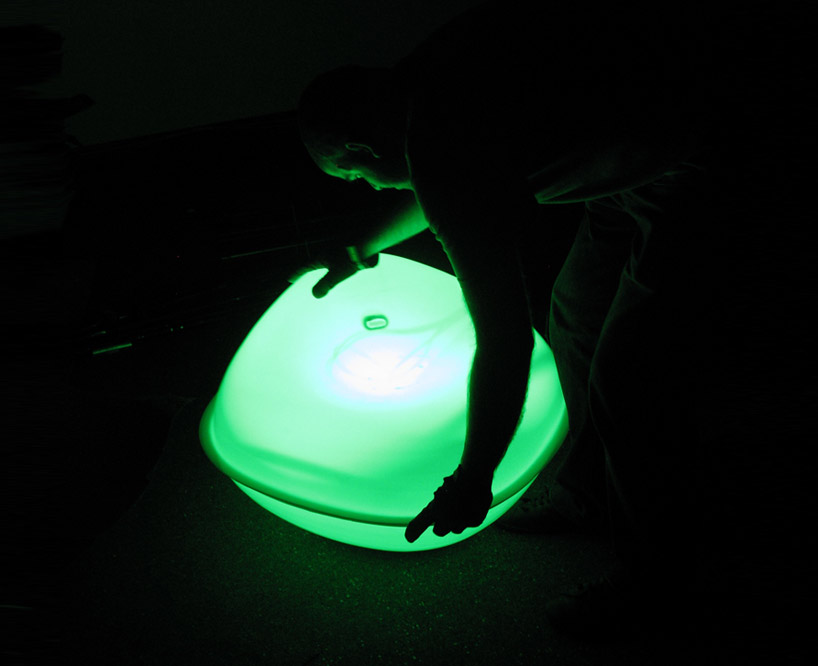 transporting the orbs to the river 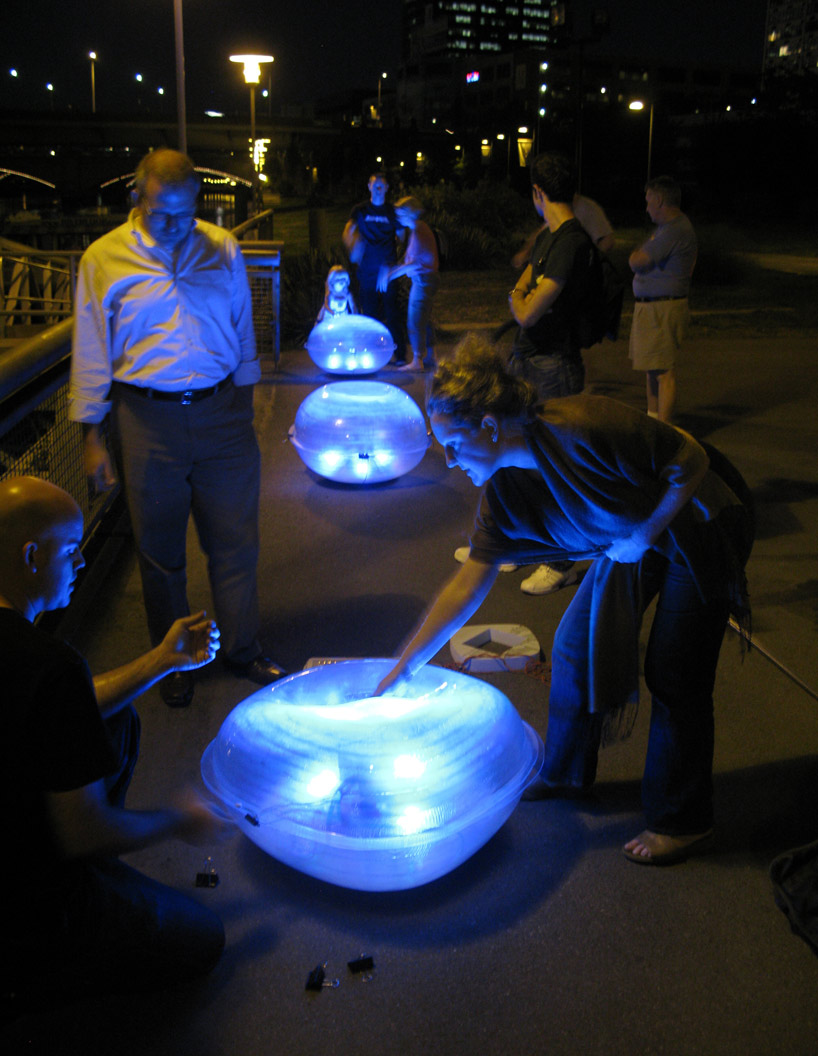 assembling the orbs near the river

the installation will open on october 15-18 along the schuylkill banks side of the river, between market street and chestnut street. the project was commissioned by the philadelphia mural arts.  additional funding was provided by the massachusetts institute of technology. 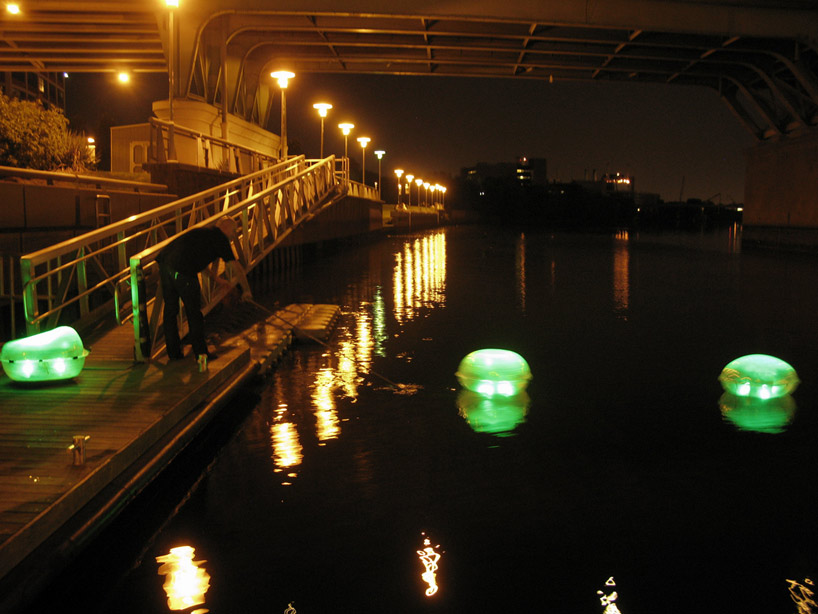 placing the orbs in the river

after light drift is de-installed, the project may be reinstalled at a second venue in boston, on the charles river. when the project is finished, the petg materials will be recycled. 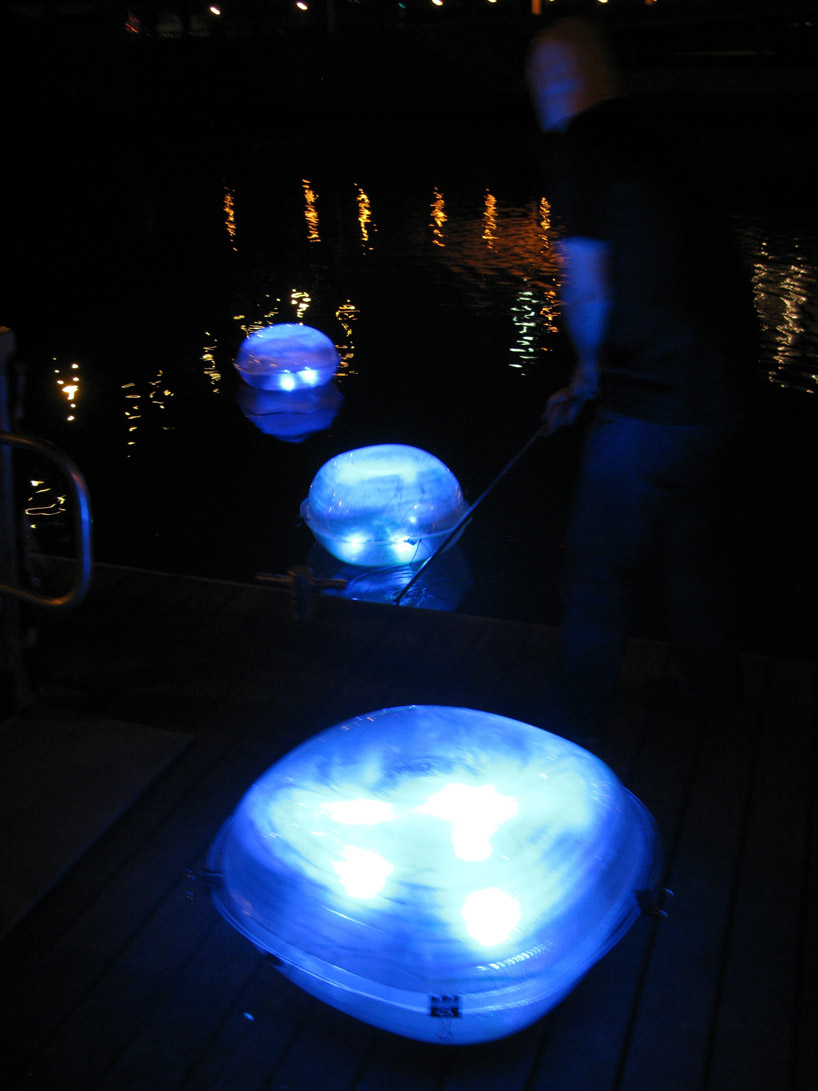 placing the orbs in the river

‘light drift’ is a project by j. meejin yoon of MY studio, and interdisciplinary art and architecture studio located in boston massachusetts. j. meejin yoon is an architect and artist, as well as an associate professor at the massachusetts institute of technology. other projects by meejin yoon include white noise white light, commissioned for the athens 2004 olympics, and low rez hi fi, a permanent interactive installation in washington dc. meejin yoon has received numerous  awards including the rome prize, the risd athena award, and the united states  artist award. 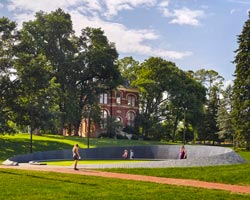 Aug 25, 2020
memorial to enslaved laborers spontaneously inaugurated at the university of virginia 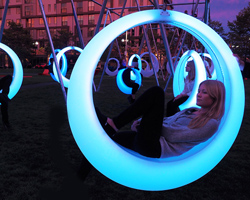 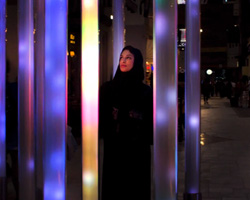 Aug 10, 2022
david altrath captures brutalist 'mariendom' church with crystal-like roof in neviges, germany
the roof presents an eye-catching folded shape, with many comparing its form to an iceberg, a crystal, a flower, or a tent.
architecture
509 shares
connections: +3670