in association with bureau d’etudes weinand, architecture firm l’escaut – both of belgium – has completed the ice rink of liege, as an extension of ron arad‘s mixed-use development complex mediacite (see designboom’s coverage here). taking its overall form from that of a whale, its integration into the retail space of the mall features an entrance at the ‘gallery’ side, with a secondary access area inserted at the back of the shopping centre’s service street, giving more positive urban value to the ‘dead end’ of the site. in this way, the ‘public mammal’ – held captive behind a net of consumption – uses its shimmering metal skin, composed of 200,000 aluminium scales, and the brightness of its white interior to attract citizens and encourage them to come and skate.

the building’s outer shell has a noise attenuation of 50db, which protects residents of the adjacent street. a series of portholes along the street sidewalk suggest activity, with the only other transparent opening being a bay in the façade that is as big as an antechamber that acknowledges a large connection between the indoors and outdoors. the overall opacity of the glued laminate timber construction is necessary as a means of insulating it from heat. it is its entire body, its material and its shape that indicates the relational dimension it wishes to maintain with its environment. 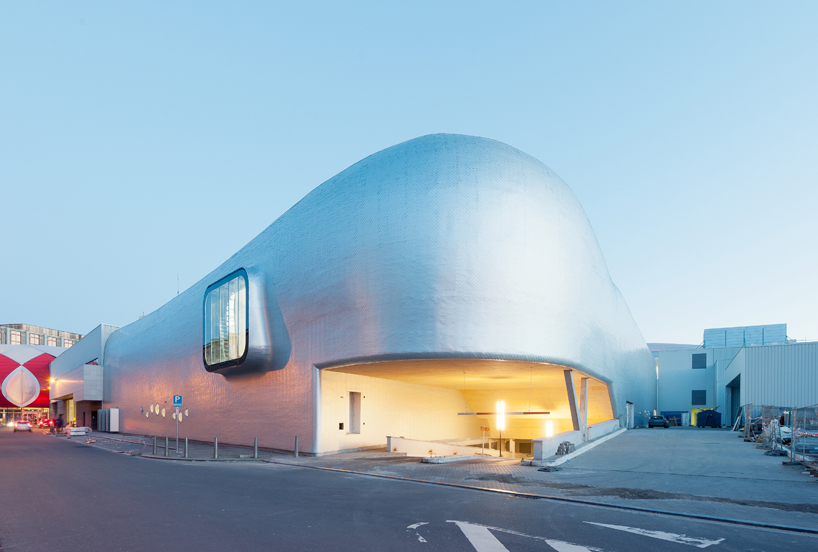 the ‘whale’s head’ serves as the entrance to the carpark of the mediacite mix-use building from which it extendsphoto: marc detiffe

the ‘whale’s head’ is where the volume rises, and serves as the main access to the mall’s car park. this most curved and prominent area of the edifice – the identity pointer of the rink dome – is also where the scheme of the scales is revealed. the interior of the whale’s stomach is designed with functionality, economy and pleasure in mind. as one arrives in the foyer, the entire skating area and capacity of the building is visible via a transparent metal wall. one is able to approach the rink directly from this area. adjacent to this is the ‘wood room’, a recreation space with solid oak flooring.

as one walks the perimeter of the translucent mesh barrier they can view the kinetics of the facility’s storage: skate drying and sharpening. at the end, visitors reach the first floor and the cafeteria. climbing the stairs, the dome of large windows with rounded edges is discovered.

the structure features an exterior shell which has an insulation factor of K22, which is equivalent to a passive house; two refrigeration units develop 1000 kW coupled with four sets of air coolers; a ventilation system of the room with a flow rate of 60, 000 m3/H  dehumidifies the air of the rink; 80 spotlights ensure a perfect homogeneity of 1200 lux during matches and competitions; and a 1200 person seating capacity. ‘ice rink of liege’ has been constructed in a way which allows it to reuse its consumed energy: heat pump, ventilation system and hot water tank all recover a part of the heat produced by the refrigeration units, and a piping system as a tichelmann loop to better distribute the cooling liquid under the rink so that as a whole the facility consumes less. 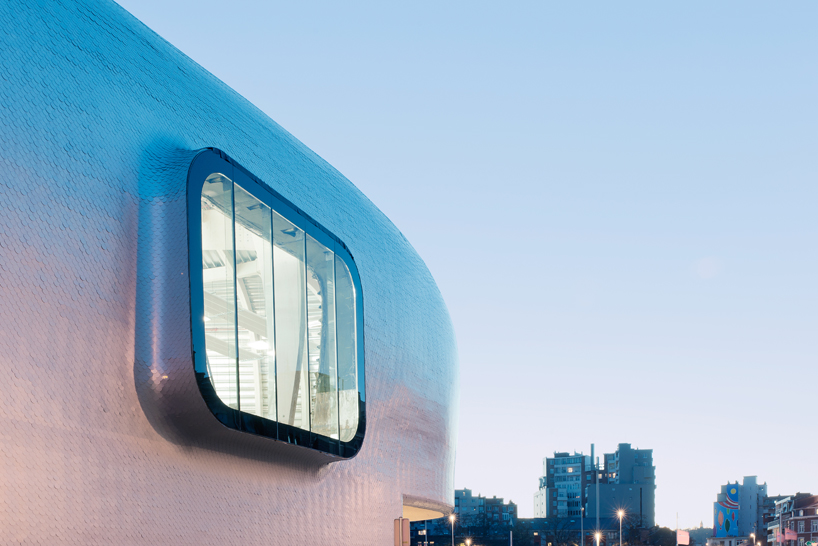 detail of the transparent opening bay in the façade of the buildingphoto: marc detiffe 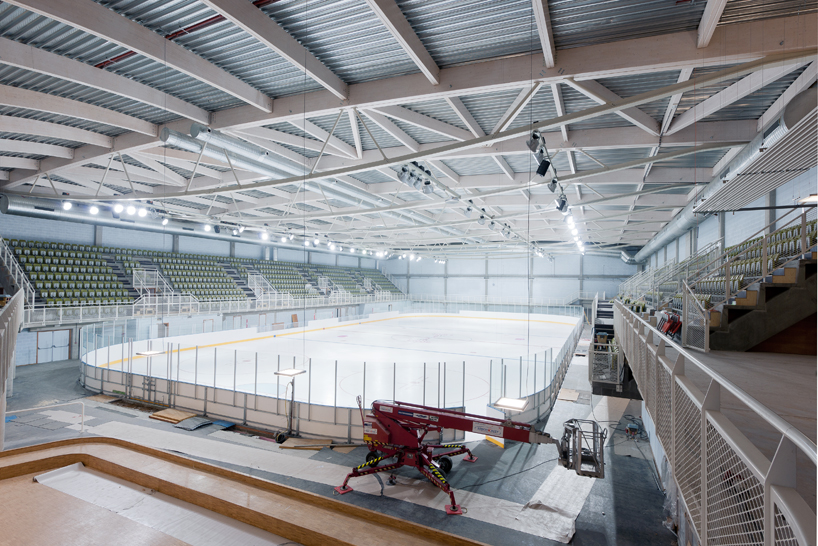 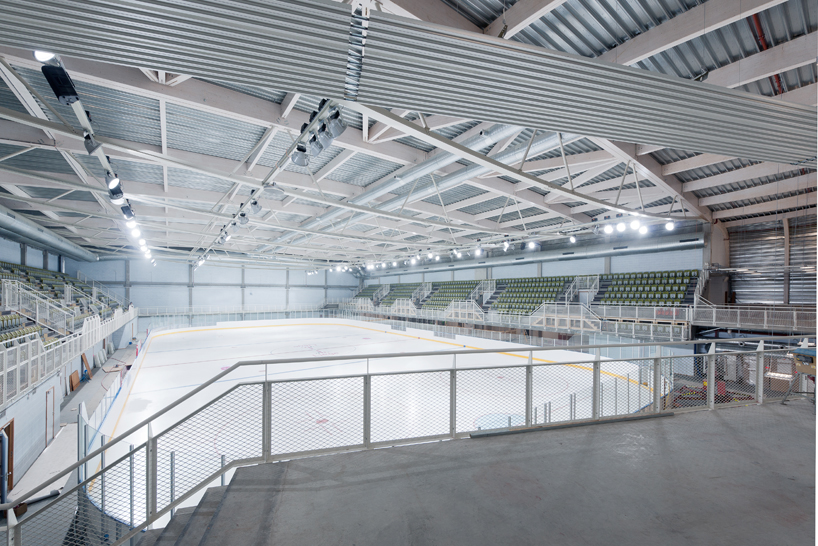 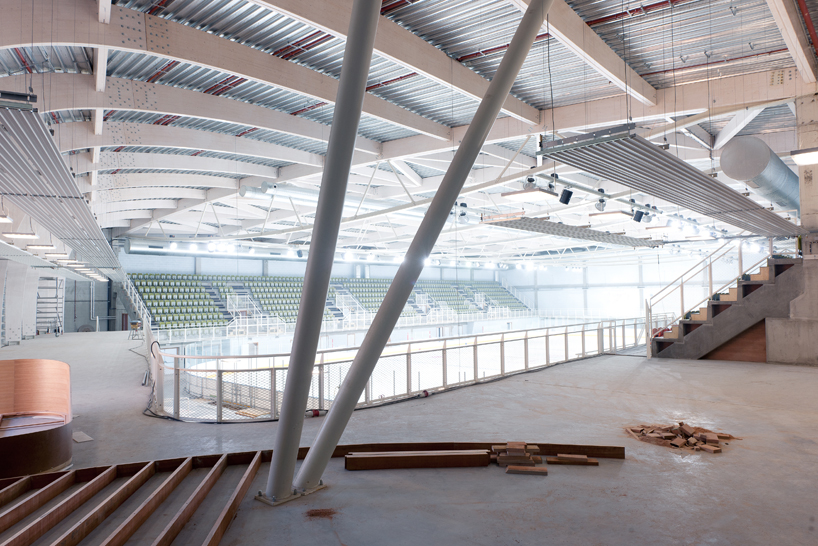 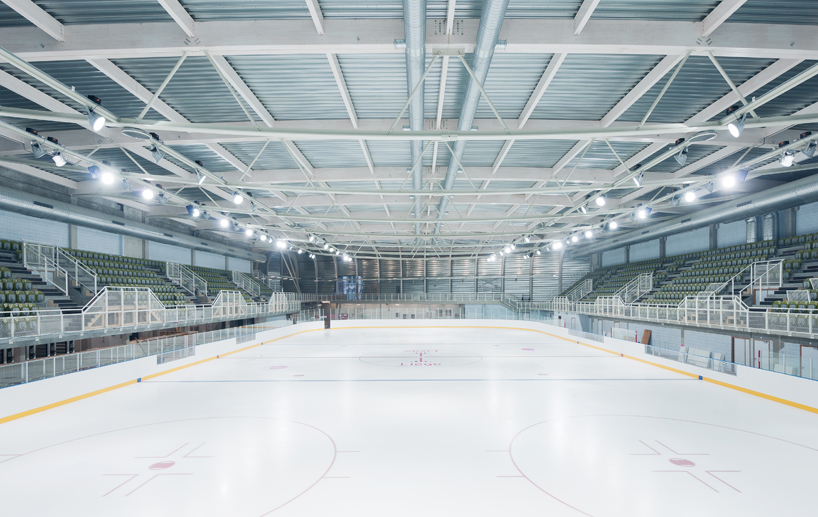 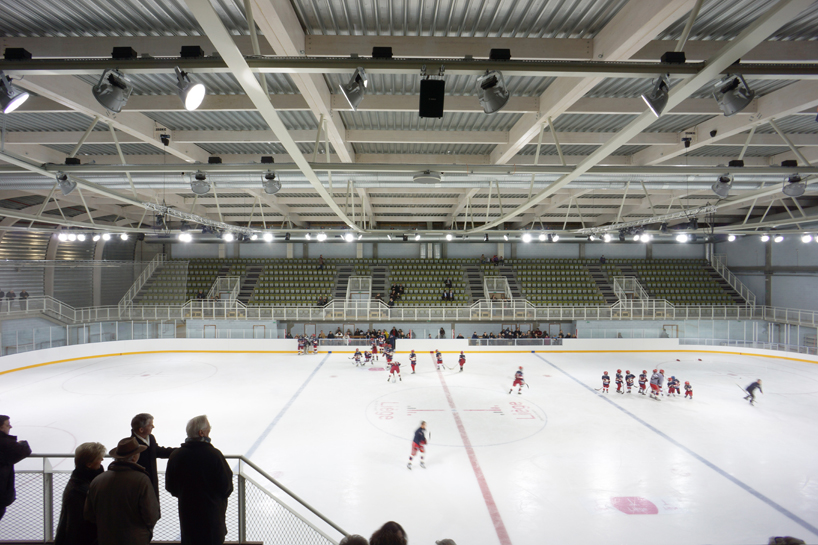 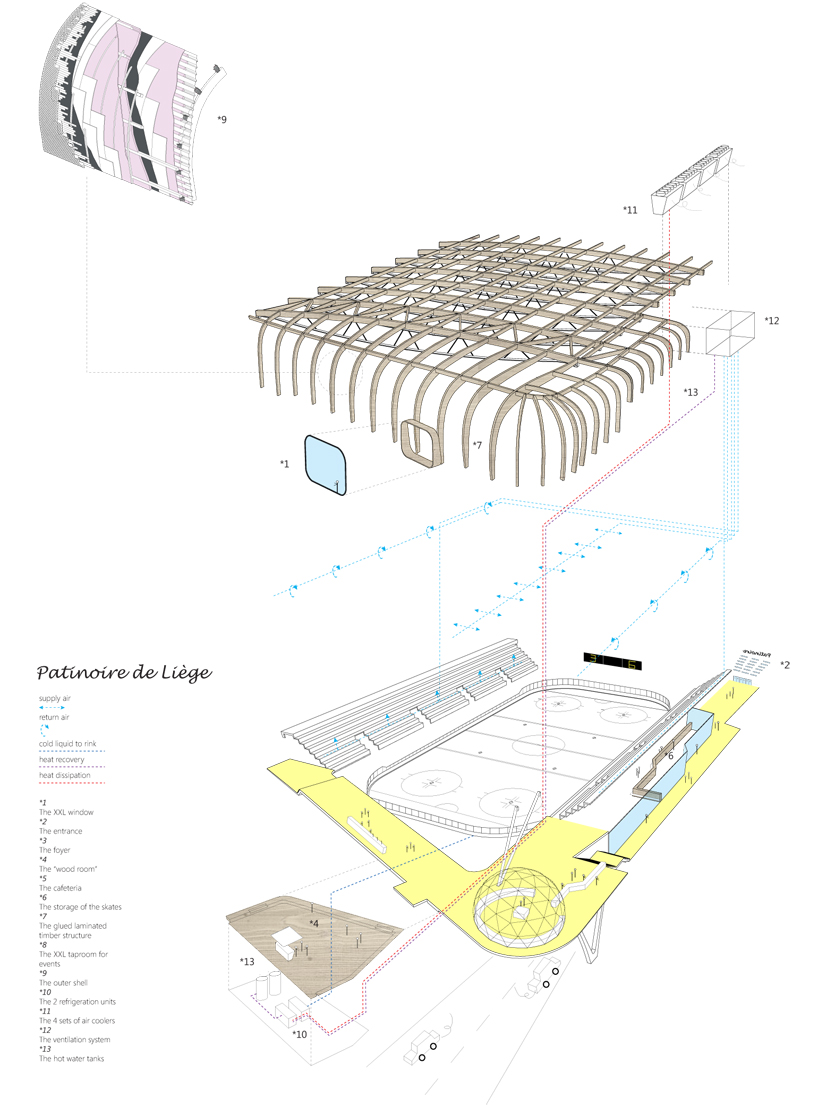