as a demonstration of their latest explorations in materials research, carbon_lab design studio at the illinois institute of technology college of architecture has realized ‘fiberwave pavilion,’ constructed of carbon fiber panels. the canopy’s arrangement, with a common module repeated and overlapped, takes influence from bi-valve shell structures. through various iterations aided by parametric modeling software, the team arrived at a wave-like form, which is designed to shift and morph when variably tensioned. 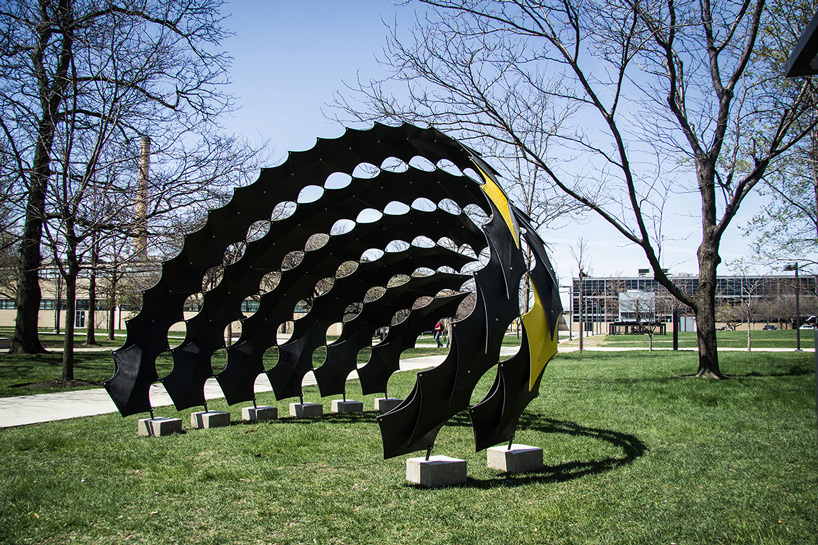 directed by studio associate professor alphonso peluso, the student-based group seeks to challenge static processes within the practice through the study of performative and adaptive physical fabrication. their most recent undertaking of the ‘fiberwave pavilion’ attempts to display the architectural potentials of carbon fiber, a compound material that has been used extensively in the automotive, aerospace, and marine industries.

the pavilion’s 1 lb (.5 kg) and 1/8″ (2mm) thick panels produce a very light, yet strong canopy structure, demonstrating the architectural potential of carbon fiber. in its uncombined state, the material is a flexible and malleable fabric, which is able to be cut with scissors and easily formed onto three dimensional molds. when coated and cured with an epoxy resin, it has the ability to become as hard as steel. the configuration attaches side-by-side shell units at two points with metal tabs. these links result in flexible rows, which are then fixed vertically by bolted pin connections. the overall wave form resolves with discrete concrete feet. 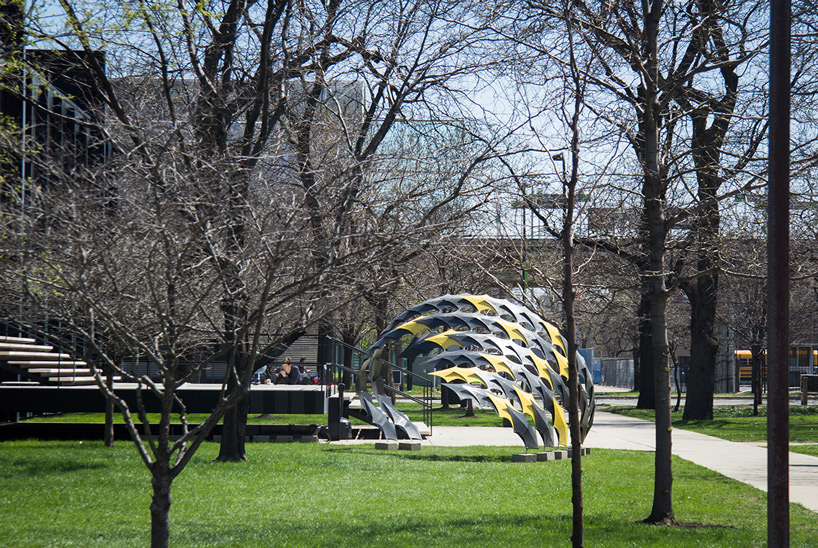 the canopy structure takes a wave-like form, with discrete concrete feet for a base
photo by sherry huang

the pavilion’s realization was funded by a kickstarter campaign lasting 24 days seeking to raise $6,500. backed by 112 donors, the venture surpassed its goal and reached a final amount of $6,937. backers received incentives including 3D printed earrings and necklaces, t-shirts, and 1/6-scale carbon fiber replicas of the shell unit. an additional $1,000 was needed for the project, and was raised by the students through weekly bake sales on the IIT campus.

the structure is located in front of the landmark s.r. crown hall, designed by the regarded modernist architect mies van der rohe. 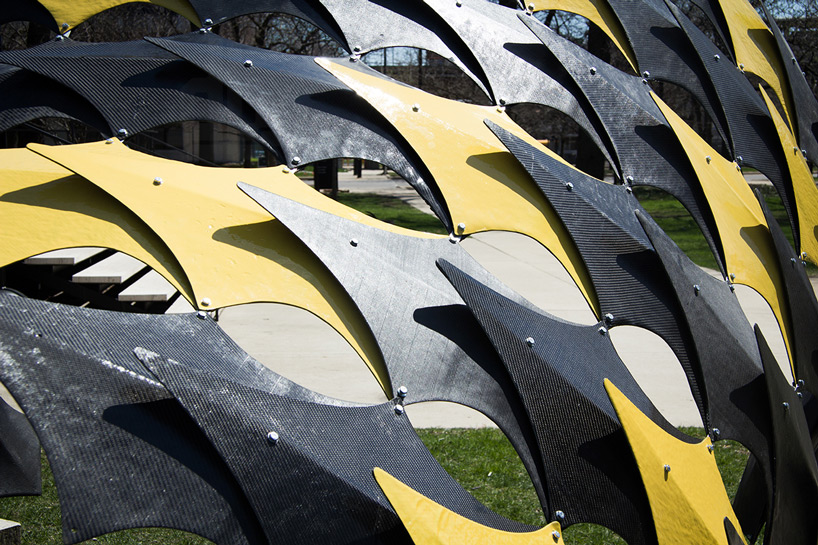 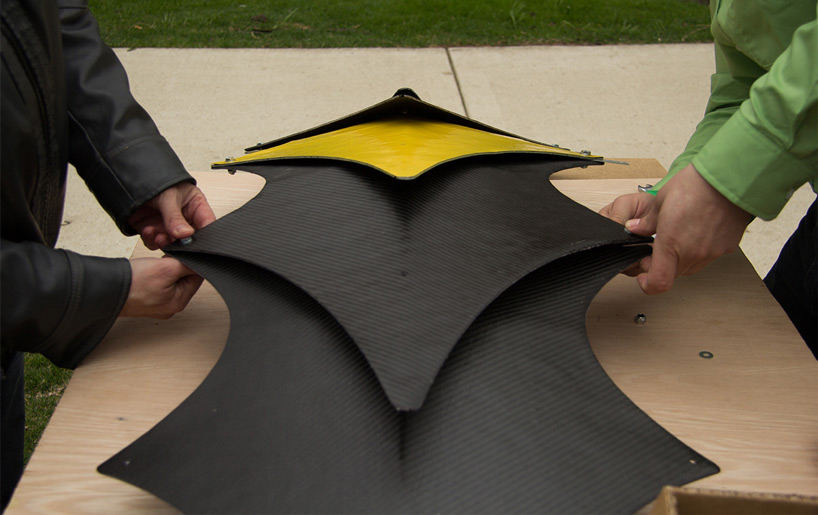 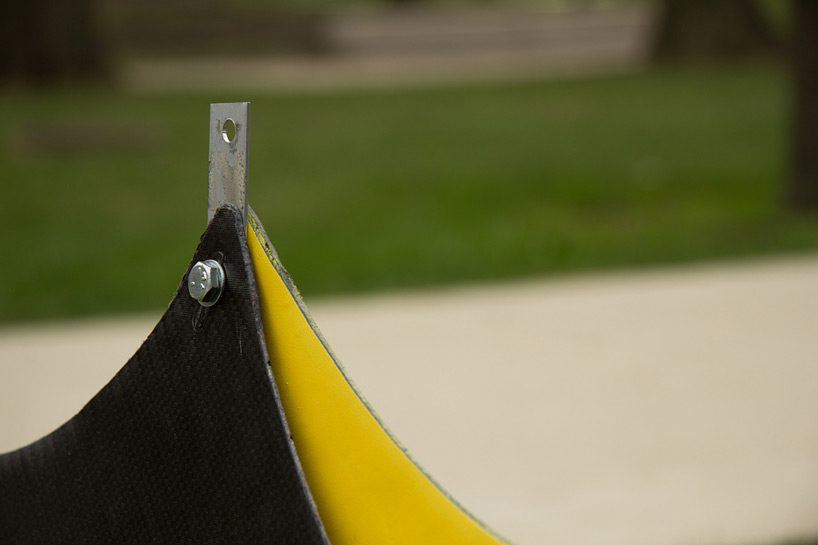 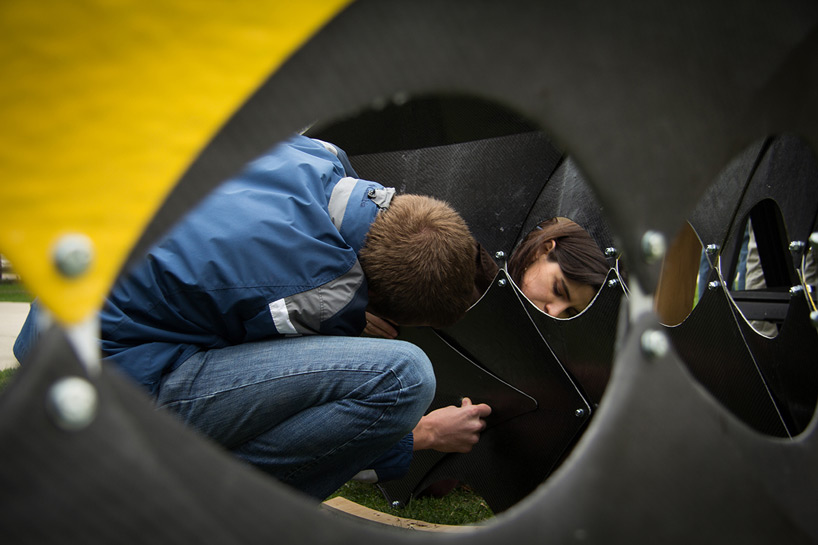 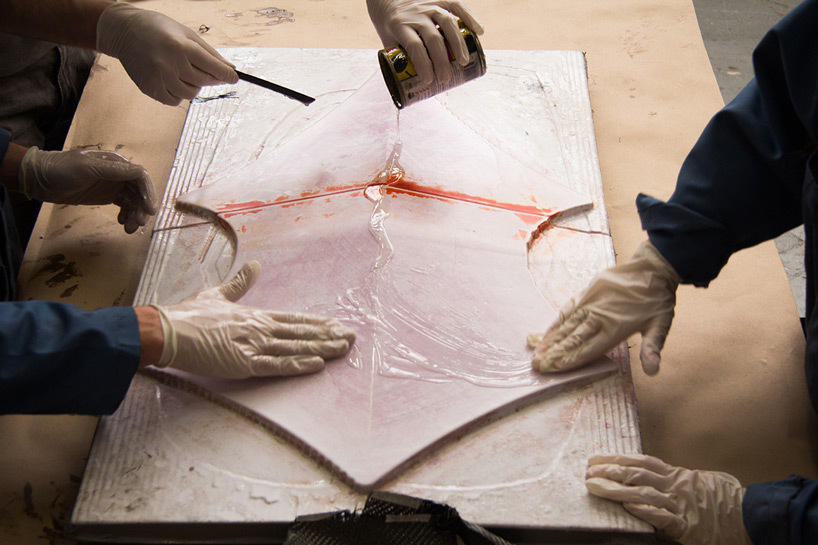 black carbon fiber is formed atop the mold, with additional coats of epoxy
photo by sherry huang 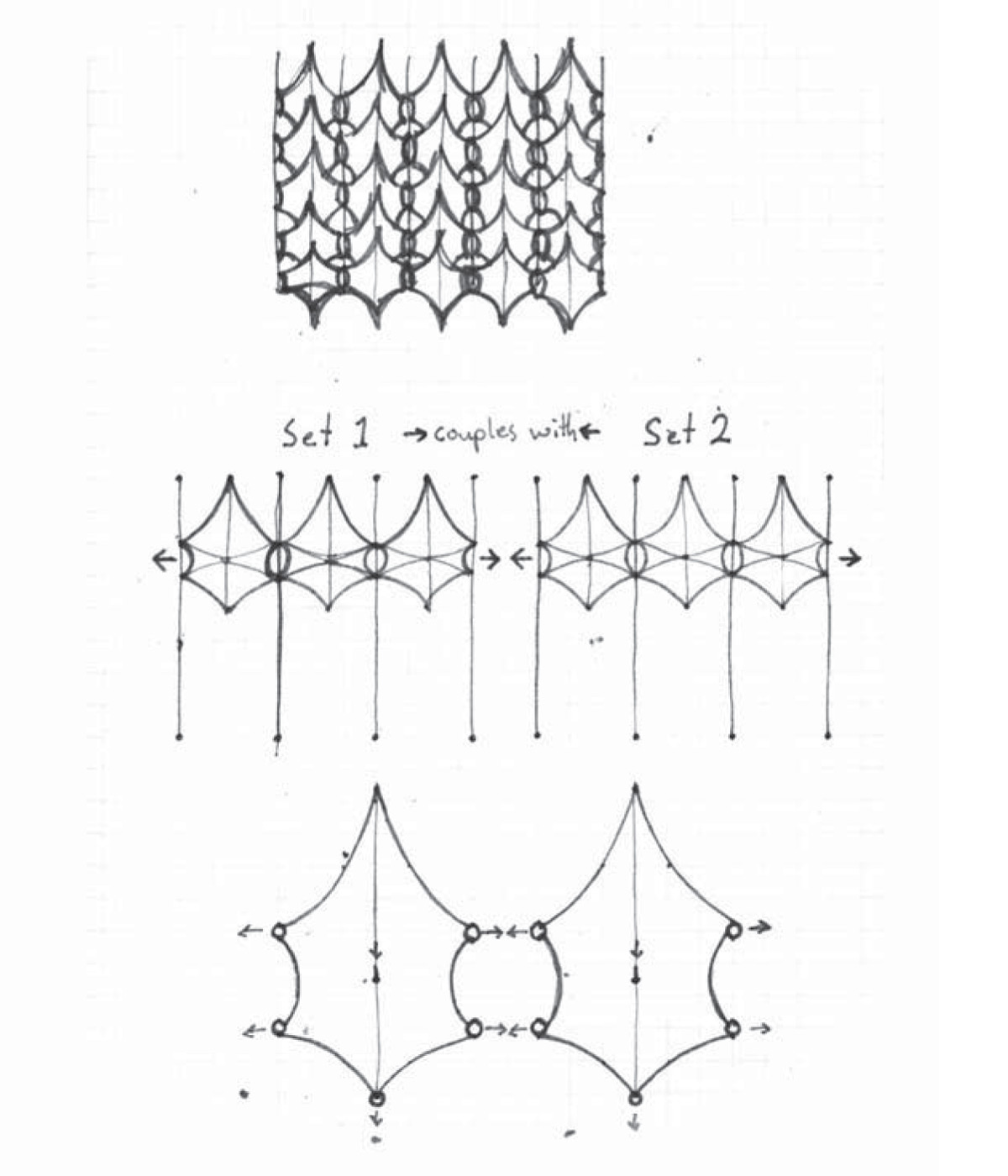 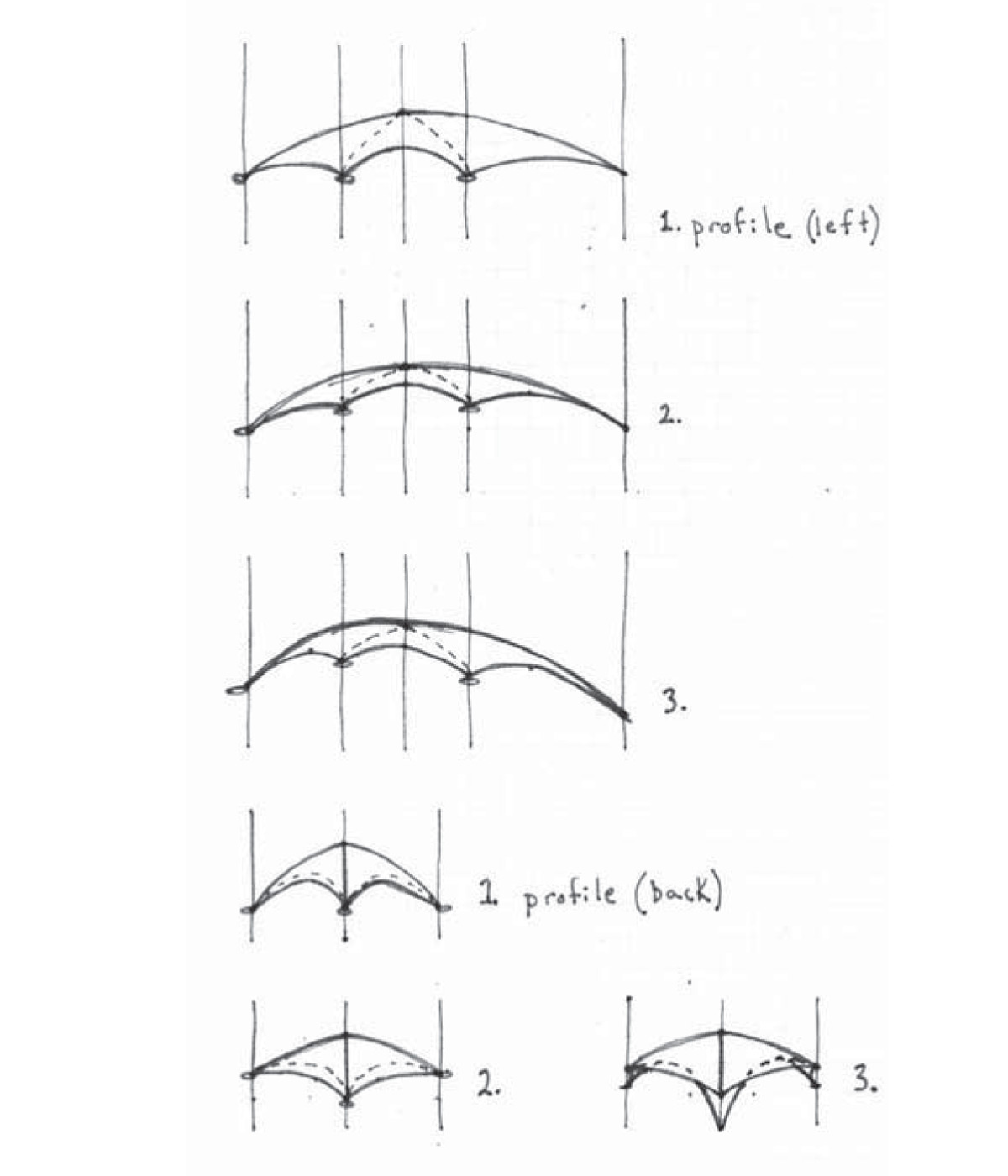 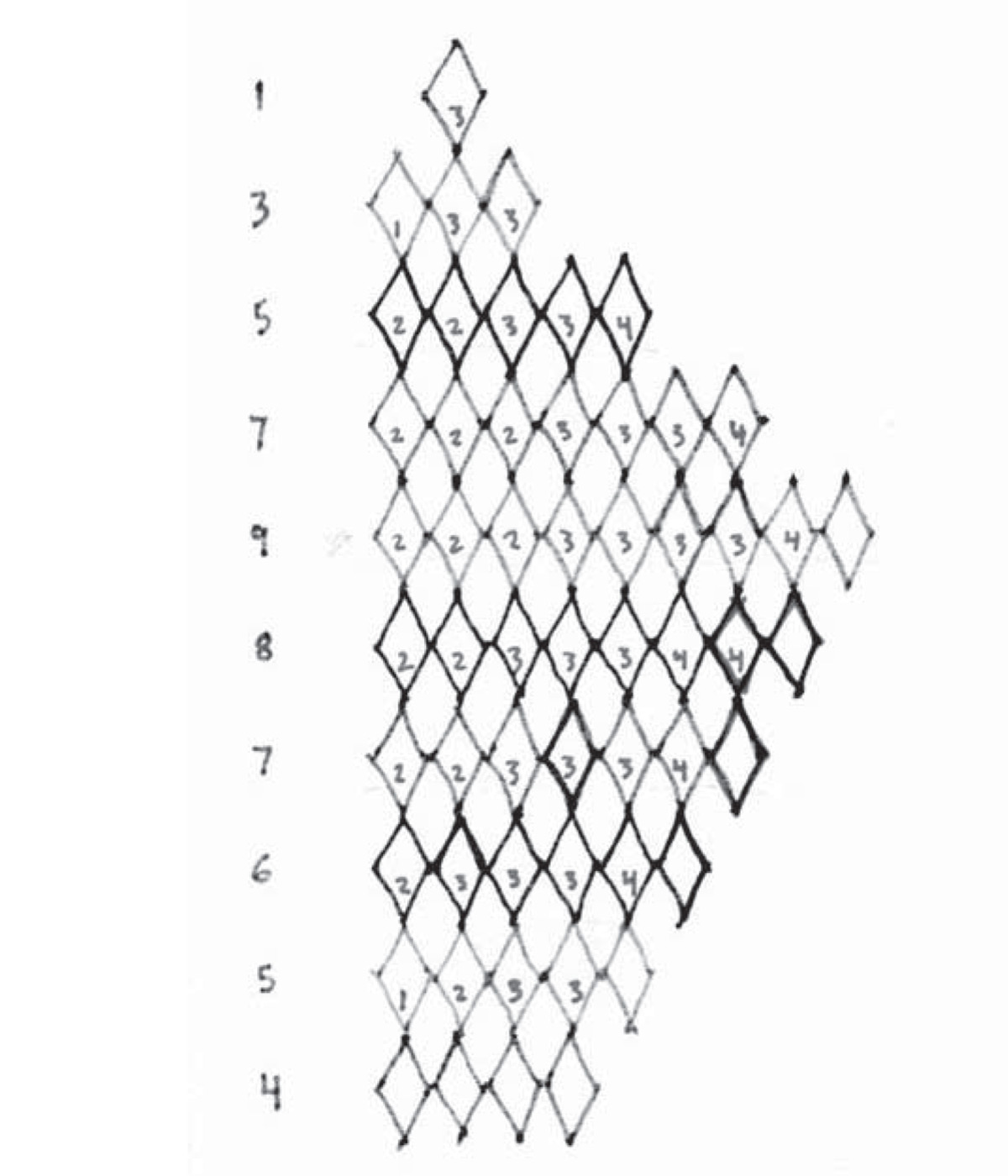