the widely celebrated and internationally recognized architect, IM pei, has died on thursday may 16th at the age of 102. born in the chinese city of guangzhou on april 26th, 1917, ieoh ming pei went on to enjoy an architectural career that spanned over six decades. as one of the most notable architects of the 20th century, the pritzker prizewinner amassed an impressive portfolio, leaving behind a great legacy of architectural work, including world-famous buildings such as the iconic glass pyramid conceived for the louvre in paris.

at the age of 17, the young pei moved to the united states of america to receive his architectural education. in 1940, he was awarded a bachelor’s degree from MIT, going on to complete a masters at harvard GSD in 1946. after staying at GSD to work as an assistant professor until 1948, the architect later became a director of architecture at a new york based real estate company, before forming his own practice in 1955. initially known as I.M. pei & associates, the firm’s name later changed to pei & partners in 1966, and finally in 1989 to pei cobb freed & partners.

prolific during the modernist period of the 20th century, pei became renowned for his use of precise geometry. the architect’s legacy, however, stretches far beyond the globalist ‘international style.’ as can be noted from his projects, pei adopted an approach that delved into each and every site he was commissioned for. after applying this method across a breadth of structures worldwide, he finally retired from the practice in 1990. pei’s career was also marked by numerous accolades, including the pritzker architecture prize, the AIA gold medal, and the royal gold medal of the RIBA. 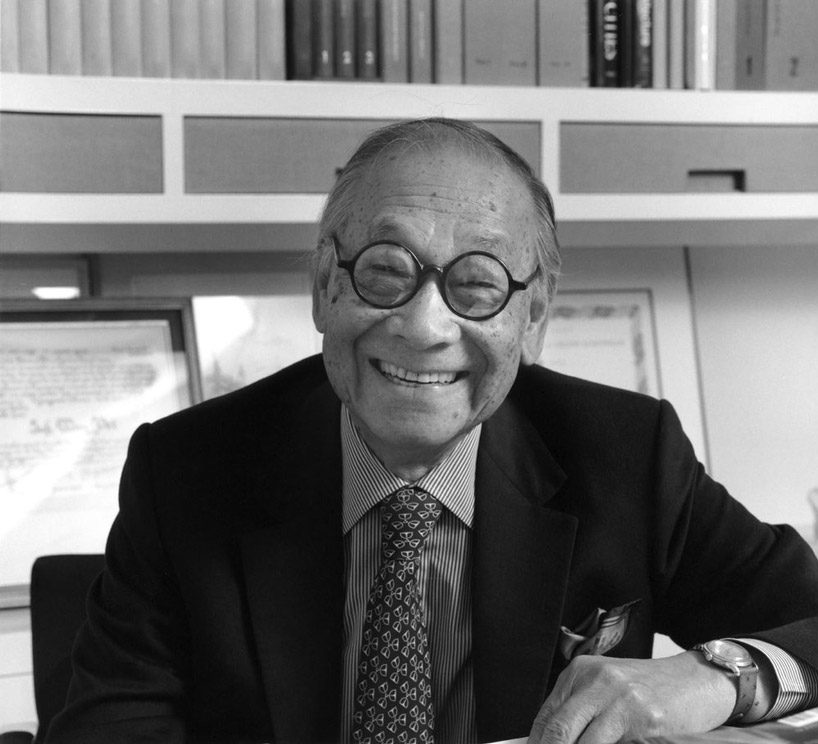 main image courtesy of american friends of the louvre

undoubtedly one of pei’s most famous buildings is the glass pyramid envisioned for the louvre in paris. tasked with the difficult challenge of modernizing france’s historic and beloved museum, the architect’s proposed intervention faced widespread controversy and criticism. however, thanks to the support of the former french president, françois mitterrand, pei overcame the negative response to his design and saw the construction of three glazed dome structures. in striking contrast to the formal, classical french style of the royal palace, the 70 ft tall steel structure built over the museum’s entrance would go on to become an iconic landmark for the city. 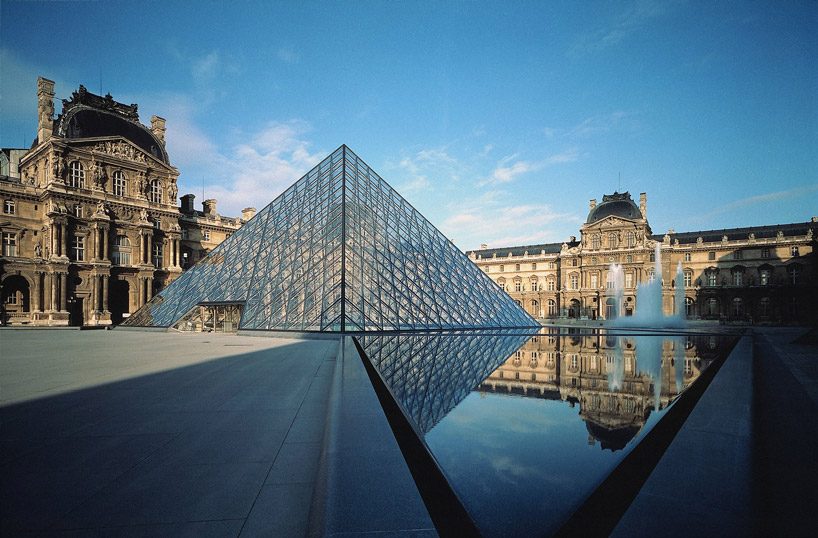 in the early 1980s, pei undertook the design of hong kong’s bank of china tower. standing at 1,033.5 ft (315 m) in height, the 72-storey building was the tallest structure in asia from 1990-92. representing the integration of ‘structure and form’, the architecture is distinguished by the triangular frameworks and mirrored glass façades, which effectively reflect the city’s skyline on its surface. much like the louvre pyramid, the bank of china tower also faced harsh criticism. at the time, it was customary for feng shui masters to be consulted on the design, but pei’s structure was the first in hong kong to bypass this tradition. prior to construction, pei in fact altered the design slightly to abate the controversy. 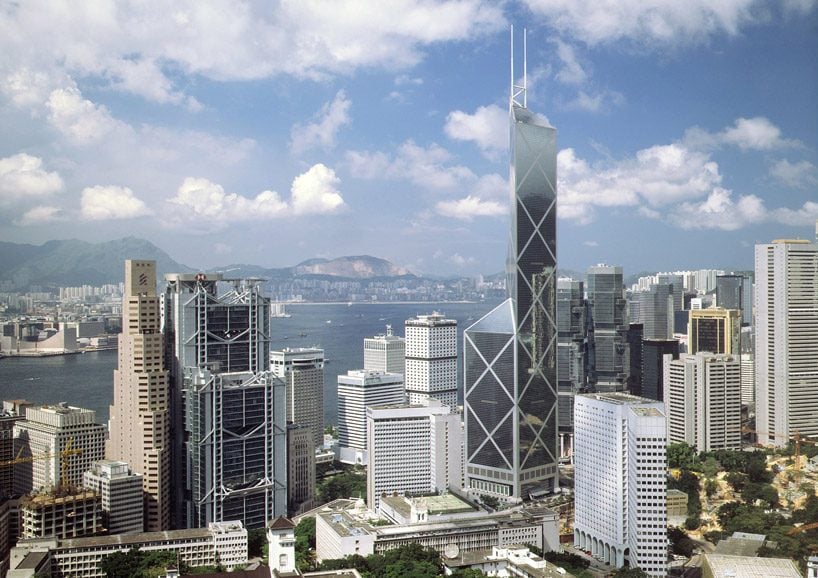 embodying his signature geometric style, the rock and roll hall of fame and museum was designed by pei for a site in cleveland, ohio. in an effort to express the spirit of music and rock and roll, the building is formed from juxtaposed shapes that have been fused together to create one bold, unified building. on one side, a circular volume balances above the lake, while on the other, a 165 ft tall rectilinear tower rises from the water, accompanied by a large glass ‘tent’. as he was not so familiar with the subject, pei endeavoured to research ‘rock and roll’ to become better acquainted with the genre. by attending rock concerts and consulting the co-founder of rolling stones magazine, pei showed his commitment to the project. 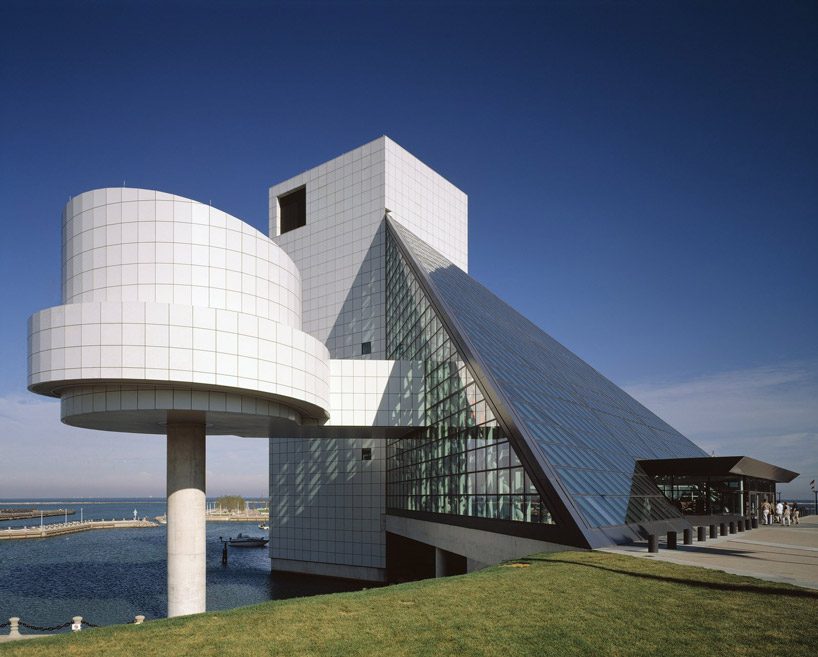 built for qatar’s capital of doha, the museum of islamic art marked the architect’s final foray into the design of cultural landmarks. coming out of retirement for the project, the then 91 year old pei devoted himself to the study of islamic culture and history to ensure he created a building that would be contextually relevant on the persian gulf. the resulting building is made up of simple volumes stacked in a geometric array, which was inspired by the patterns predominant in classic islamic architecture. positioned on a man-made island and covering a vast area of 45,000 m2, the white limestone form achieves what pei intended by announcing itself, yet also fitting in within the context. 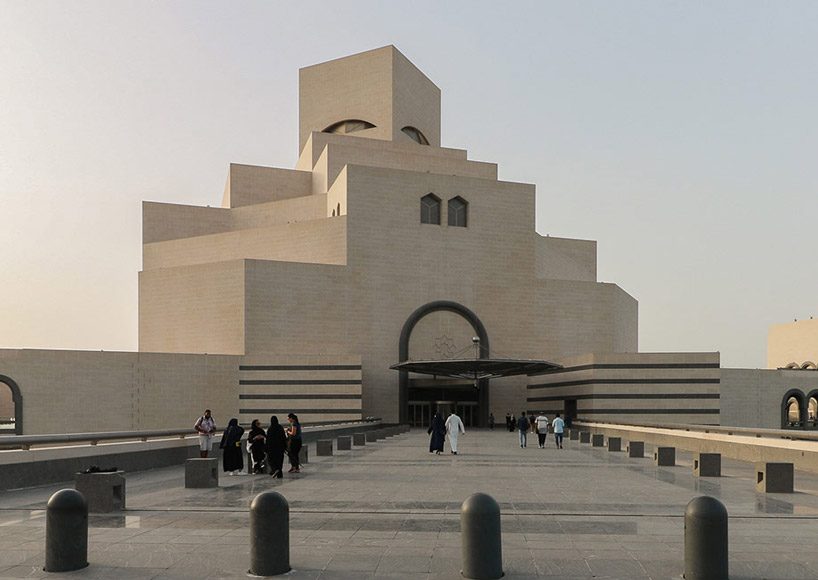 as can be identified from some of the aforementioned projects, a large part of pei’s architectural legacy is that he understood the importance of cultural relevance within architecture. rather than simply impose the same style upon every context, the ‘american-chinese’ architect sought to understand the history and meaning of a place, going against the idea of ‘internationalizm’. with his dual nationality, which was also a source of contention for the individual, pei became, and remains, an important figure for chinese architects and students alike. an immigrant to the united states, pei embraced both eastern and western influences and overcame controversy to become one of the most esteemed and sought-after architects in the world.