completed by ISSHOarchitects, shinminka is a new form of vernacular architecture introduced to the okinawa prefecture in japan. once called the ryukyu kindgom, the area has been blessed with lush forest landscapes and oceanic resources. even more, its people organized a unique social system that gradually adapts the culture and latest technologies of its neighbours to their own particular environment. by cultivated distinct lifestyles based on their surroundings, they were able to create a sustainable relationship with nature. 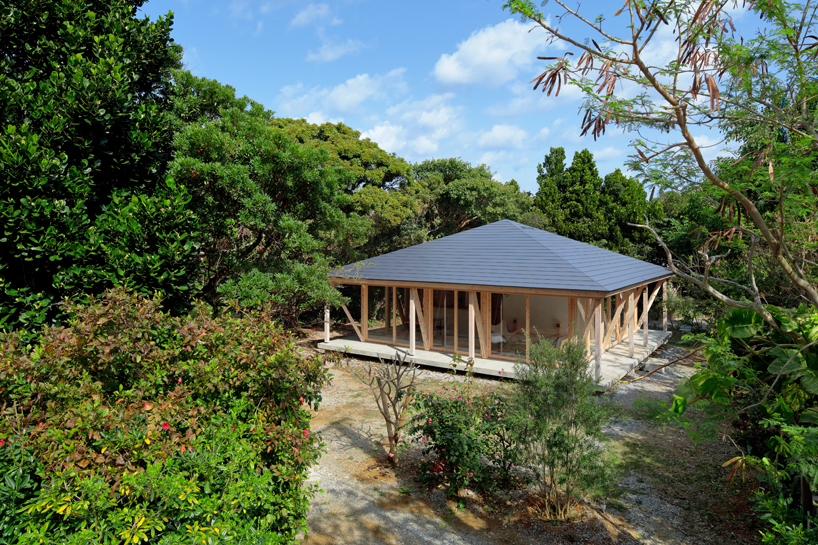 however, due to constant shifts in governing bodies and rapid technology inflows since the industrial revolution, the delicate balance between people and nature is lost — and the architecture was no exception. vernacular buildings were replaced by newly-imported standard construction methods with huge emphasis on convenience and safety; this jeopardized the okinawan cultural identity and damaged its local scenery. the extent of the economic impact can be observed in the striking architectural gap between rich and poor, pronounced across towns and cities. having said that, ISSHOarchitects finds it crucial to recognize this chain of events not as the capitalist economy destroying tradition, but rather as the result of haphazard integration of technology without allowing it to undergo the process of indigenization. 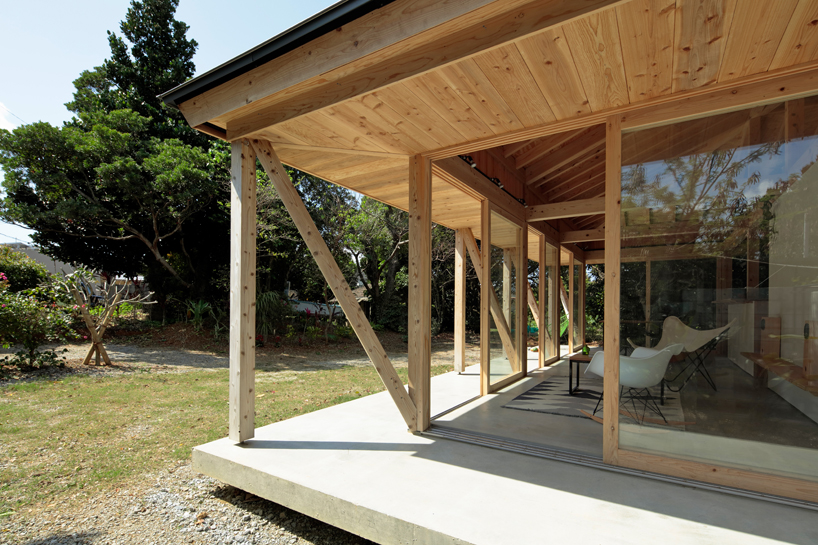 ‘now that the information age is in the process of maturity, we are facing a new challenge to course-correct this trend. but more importantly, it is an opportunity. by connecting new technologies and galvanizing the intelligence of local communities, I aim to nurture a new form of architecture that is indigenized, vernacular, and symbiotic with nature. by doing so, I believe okinawa can build a rich, distinctive architectural environment once again. it is with this wish that I built shinminka,’ as stated by lead architect jun vera. 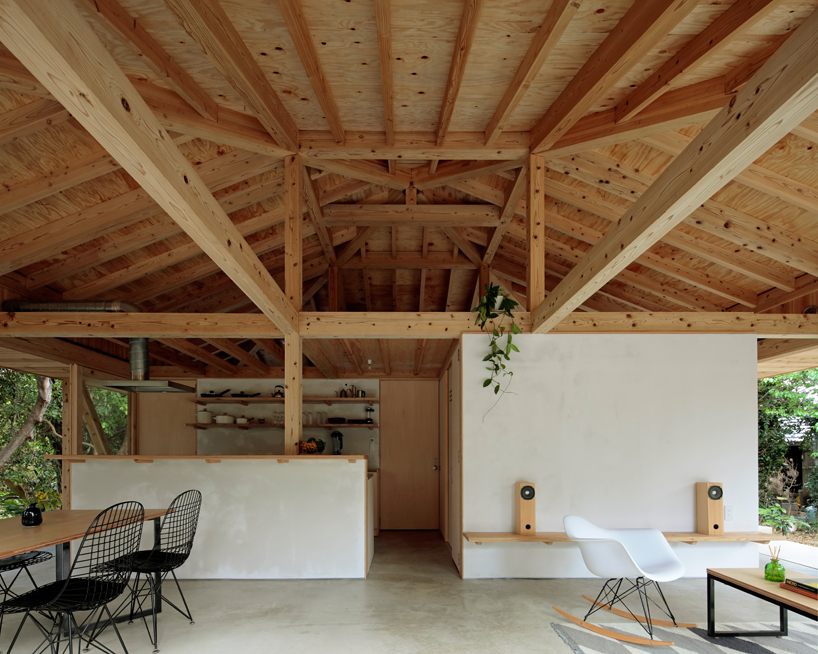 during the process, vera tried not to be too nostalgic about the past, reasoned inductively, and looked through the lens of contemporary architecture. while it might be true that the overall design is in line with traditional japanese architecture, some design progress has certainly been made and is evident when examining two classical conflicts. the first is the fight of lateral strengths in structures against natural disasters—particularly typhoons in okinawa—and ventilation. the stronger the structure, the less ventilation there will be and hence more humidity will remain inside and prevent openness. the second conflict is between wind load and the size of eaves. the larger the eaves, the greater the wind load; the smaller the eaves, the less sunshine can be shielded from the interior. all in all, it was necessary to develop design solutions for both of these issues. 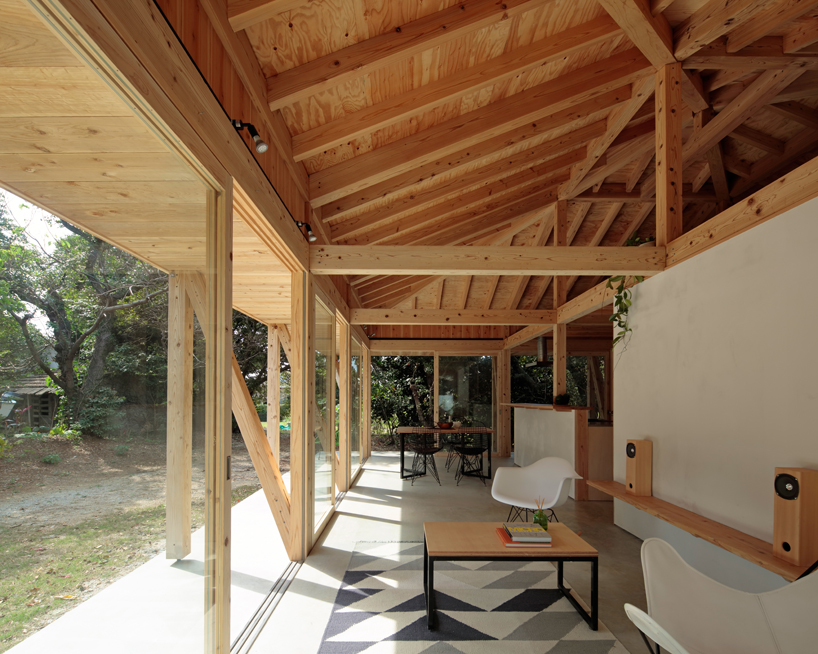 usually to ensure lateral strength, braces are placed parallel to the walls; but by designing this way, ventilation and openness will be limited. hence, the idea is to install braces radially towards the outside — connecting to outer columns of the building. at the same time, the roofs (the eaves) are extended to those outer pillar to secure the right size and control wind load. this would provide sufficient lateral strength and resistance against wind load even in the face of typhoons. in this way, I freed the structure from the necessity of walls; for the first time in my design, it is possible to employ glass windows on all four sides of the building… providing more than enough ventilation and openness to the outside environment. seamless transition from outside nature to architecture had been realized,’ continues vera. 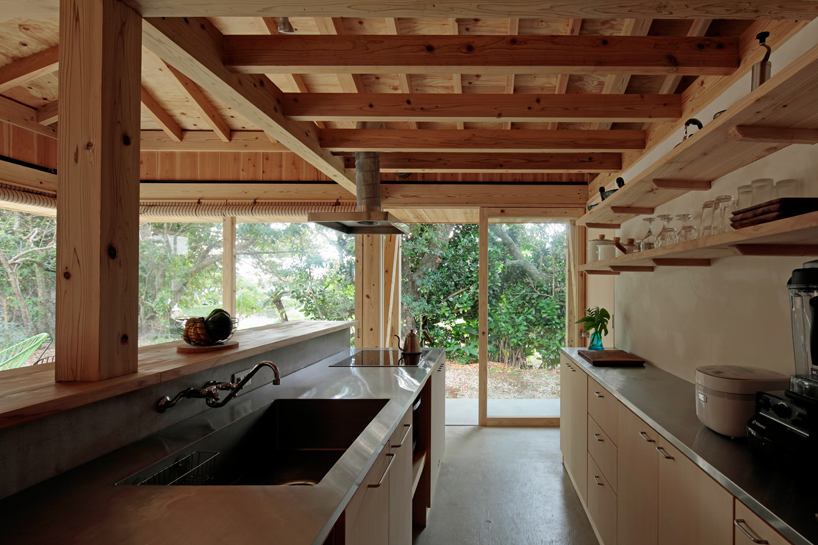 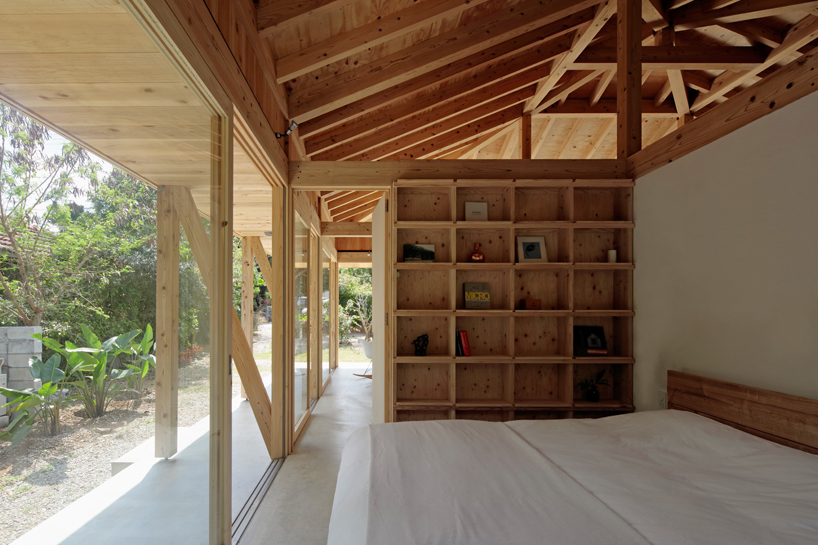 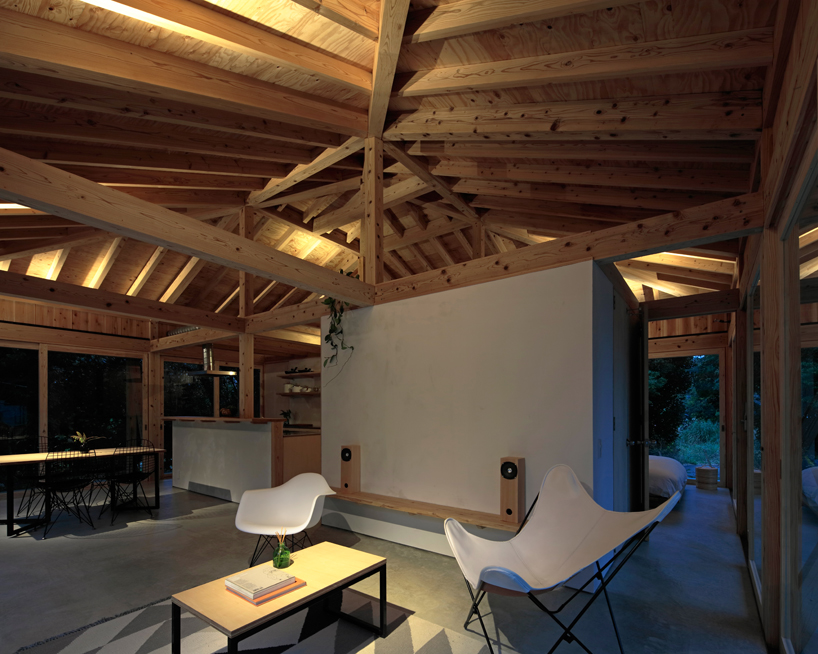 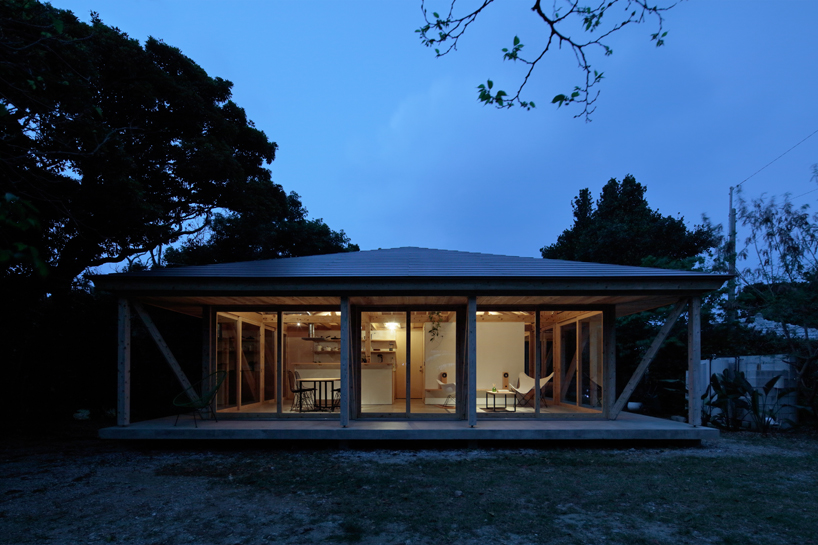 evening view of the residence 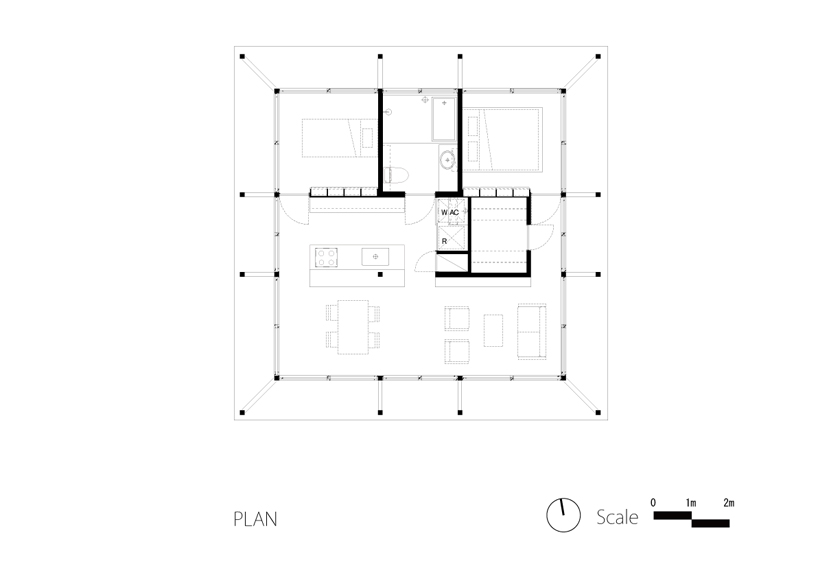 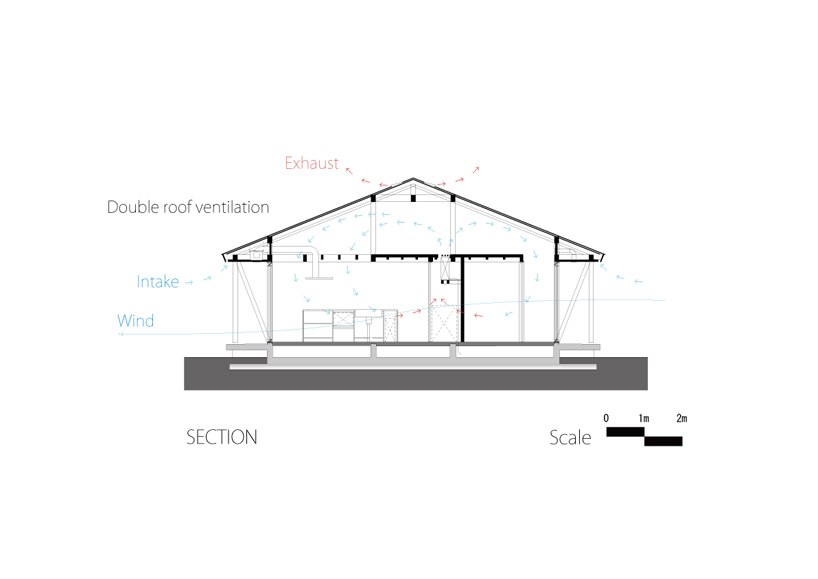 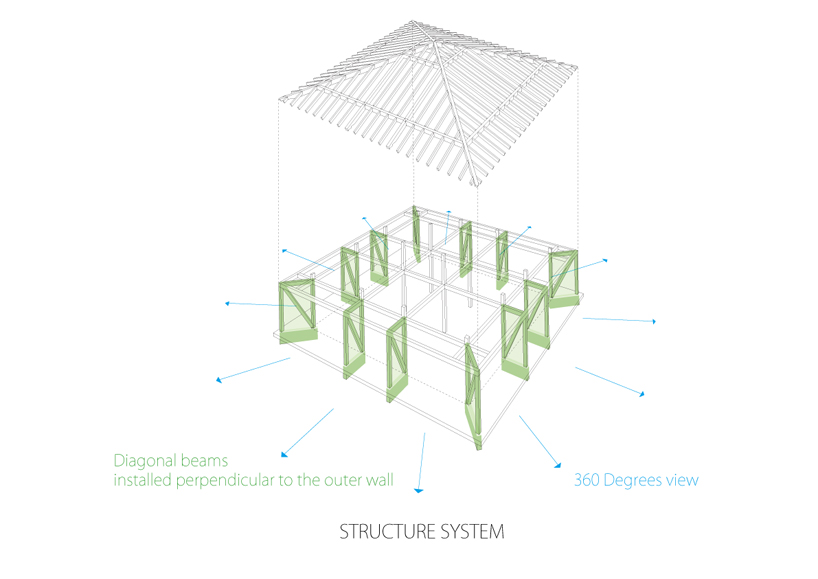 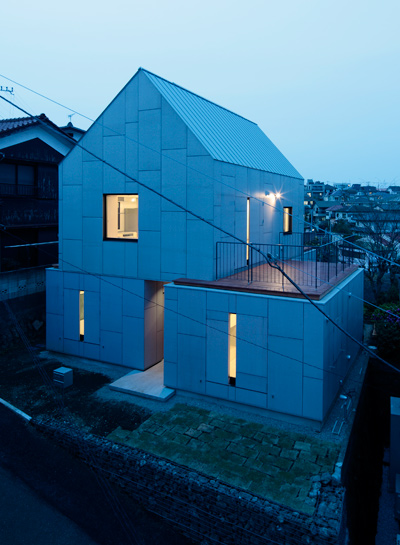