paris-based jakob + macfarlane architects (dominique jakob, brendan macfarlane) has sent us images of ‘orange cube’, their soon-to-be-complete commercial and cultural complex in lyon, france. designed as a part of an urban planning project to replenish the docks of lyon, the five-storey orthogonal cube plays off the fluid movement of the river saône, exploring the effects of subtraction and voids on the quality and generation of space. 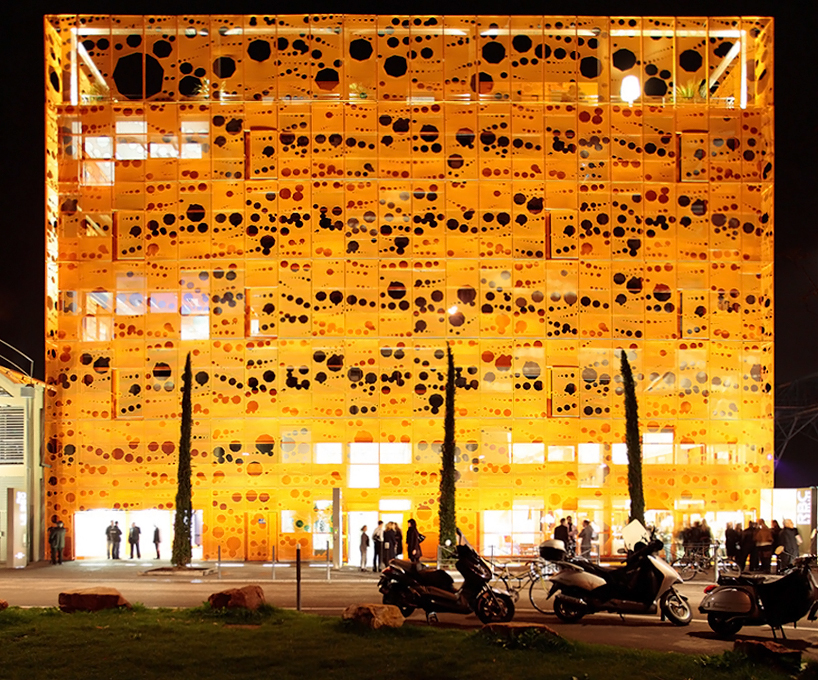 built on a regular framework of 29 x 33 m, the structure stands autonomously on the site, a wharf with a predominantly industrial background. the most noticeable element of the design – its bright orange shade – is an abstraction of lead paint, an industrial color often used for harbor zones. the external skin is a light facade, punctured with a pixilated pattern that resembles trailing droplets, a reference to the adjacent river’s flow. this porous envelope allows sightlines and natural daylighting while establishing a distinct identity for the building.

in context of the river and surrounding structures image © roland halbe

the structural regularity of the cube is broken on the north-west corner which faces the river. conic in form, the large, diagonally-running void generates new space: a large atrium is created which is circumscribed by a series of outdoor corridors that connect the office platforms together.the facade is pulled into the depth of the volume, resulting in a shift in interior/exterior relations, as well as facilitating light and views. another volumetric subtraction on the entry and roof levelestablish direct relations between the building, its users, and the site. 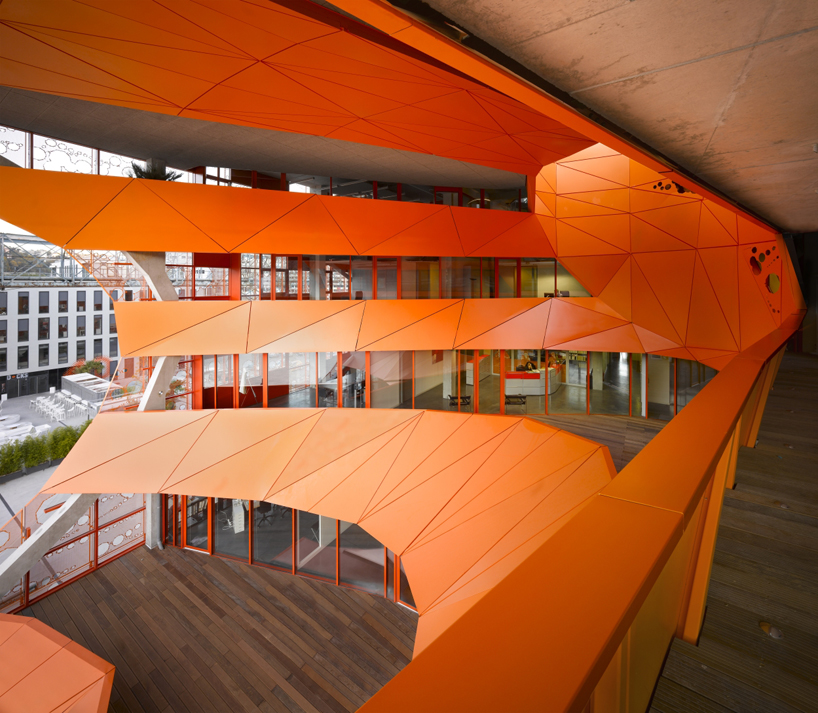 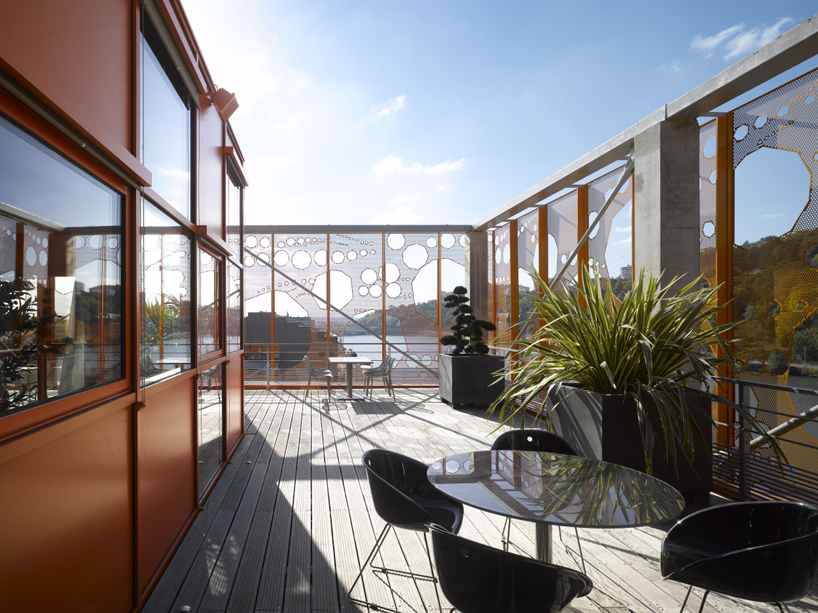 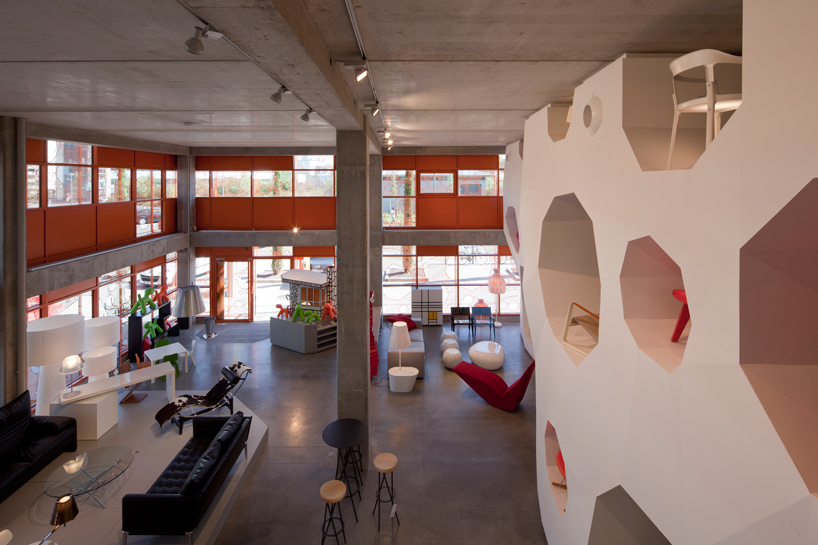 featuring a double-height layout, the ground floor accommodates a design showroom. the display concept, which was also created by jacob + macfarlane architects, was developed as an extrapolation of the ‘orange cube’s architectural language. taking the treatment of the facade, a three-dimensional volume was generated for an L-shaped wall that wraps around the space. sixty ‘alvéoles’ are used to display furniture pieces, while the unit as a whole define the circulation of the floor. 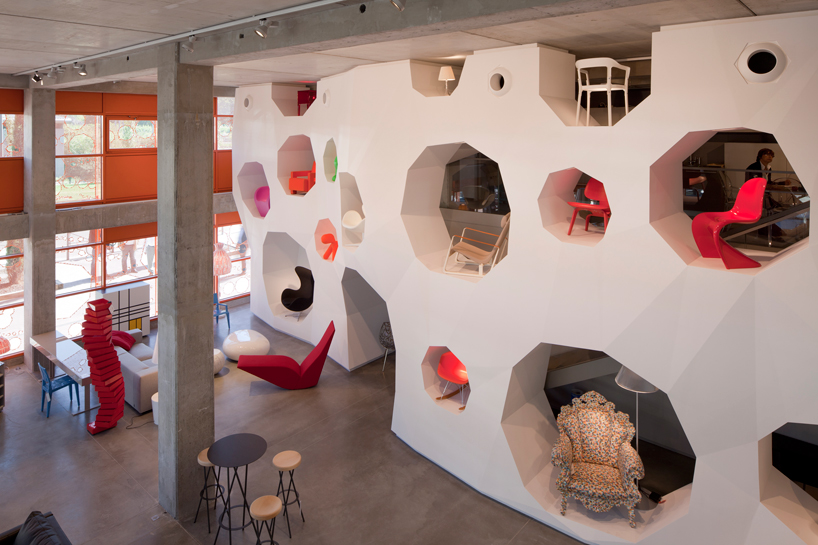 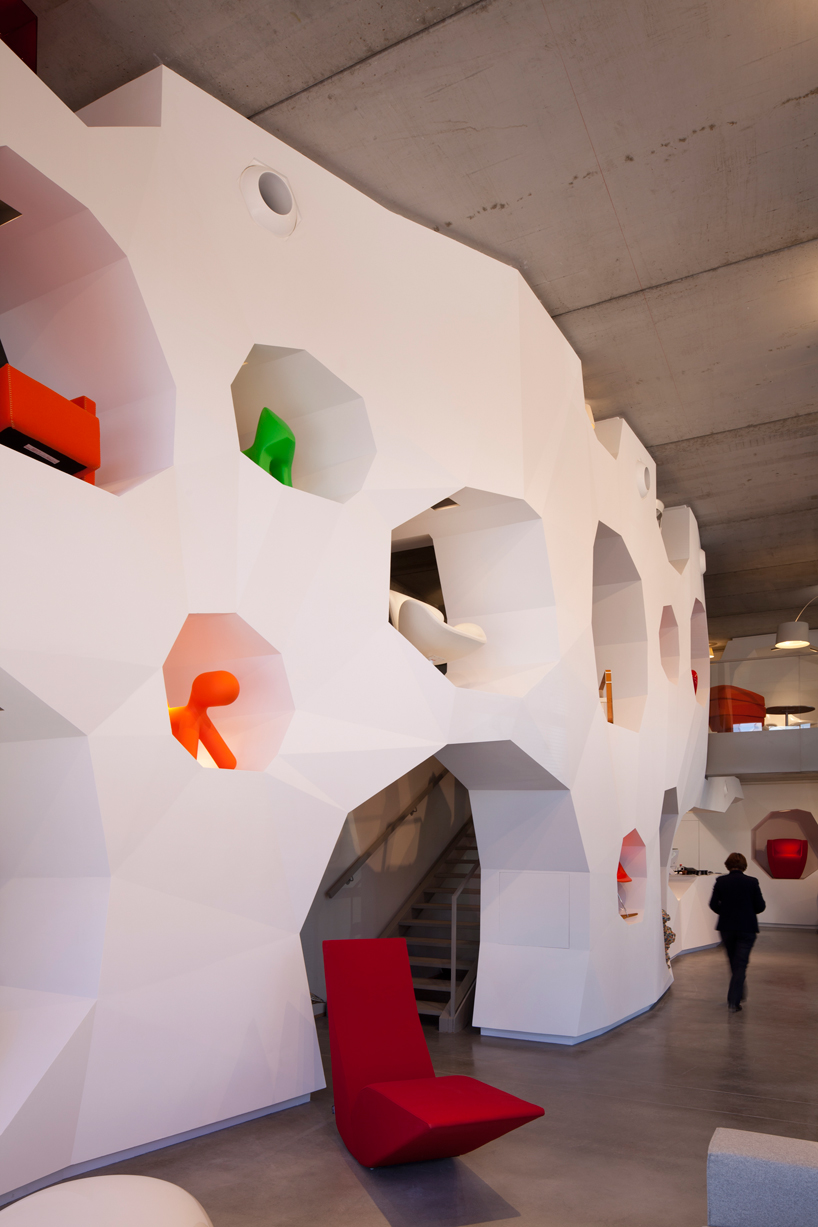 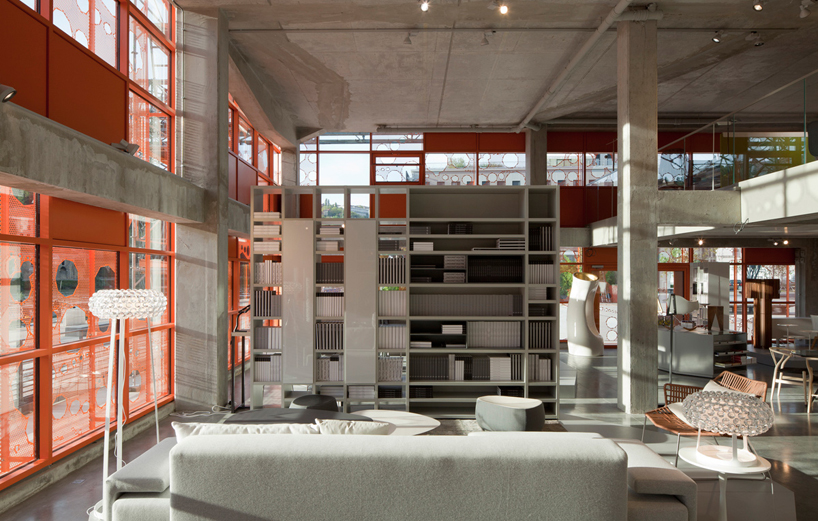 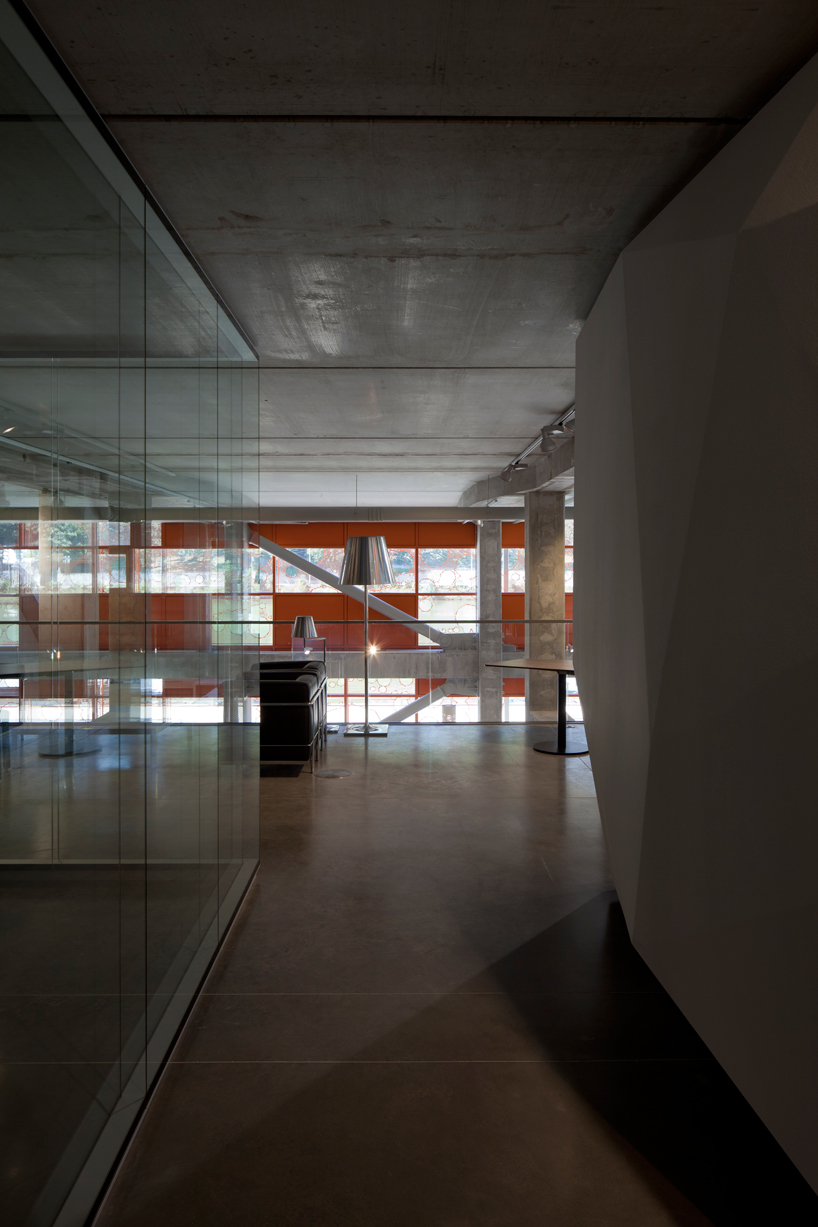 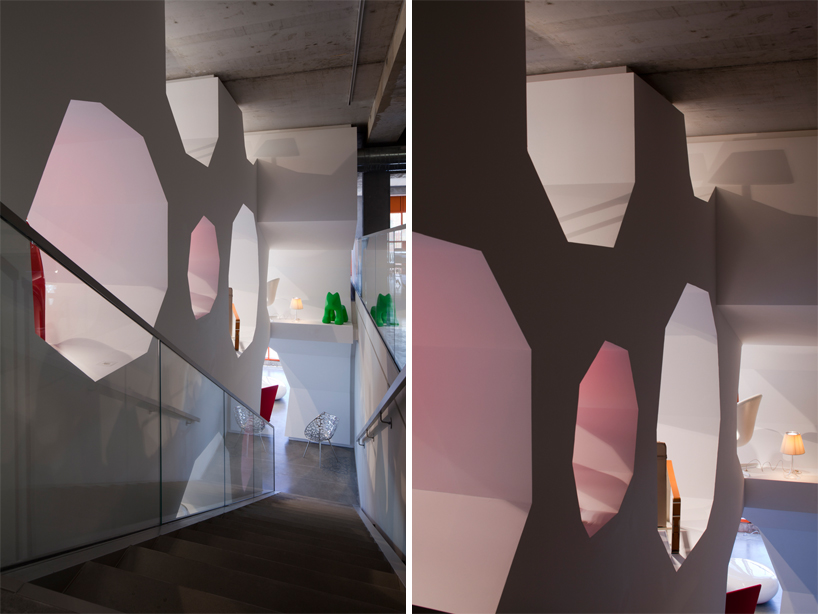 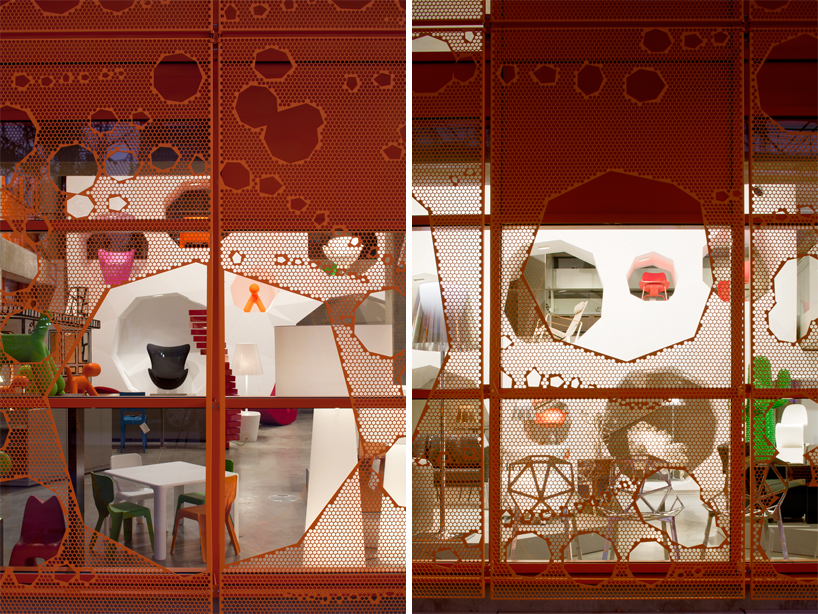 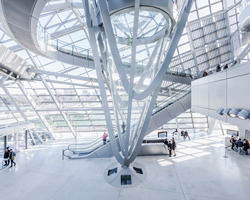 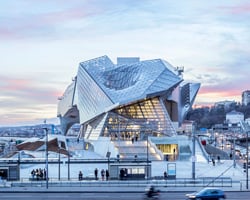 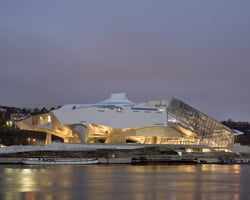