a staggered zinc and slate clad boathouse situated in chicago’s clark park is a 2016 recipient of the institute honor award from the american institute of architects (AIA). the jury recognized the building — designed by studio gang architects — as ‘a respite from hectic urban life,’ with ‘a wonderful informal relationship between building, river and the park where it sits.’ completed in 2013, the scheme is one of four boathouses commissioned as part of an initiative to revitalize the chicago river. the design supports this larger movement toward the ecological and recreational revival of the waterway by creating a key public access point to this shared city resource. 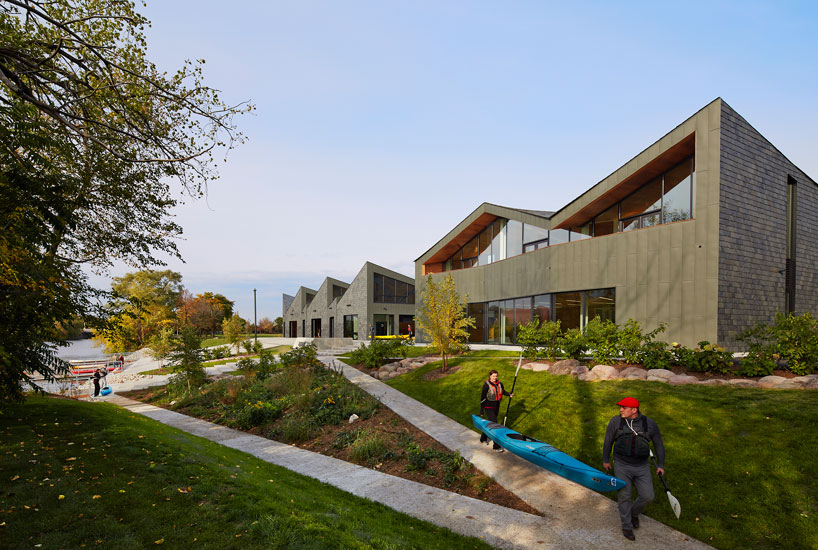 clad in durable zinc and slate panels, the boathouse’s two structures form a portal to the river. the undulating roofline translates the rhythm of rowing into architectural form, providing both visual interest and passive solar heating through the building’s upper clerestory. the structures themselves, as well as the site’s porous concrete and asphalt, native plantings, beds of gravel, and rain gardens, divert 100% of storm water from the city’s combined sewer system. the boathouse is home to several youth rowing clubs, while the indoor tank supports classes for all members of the public. 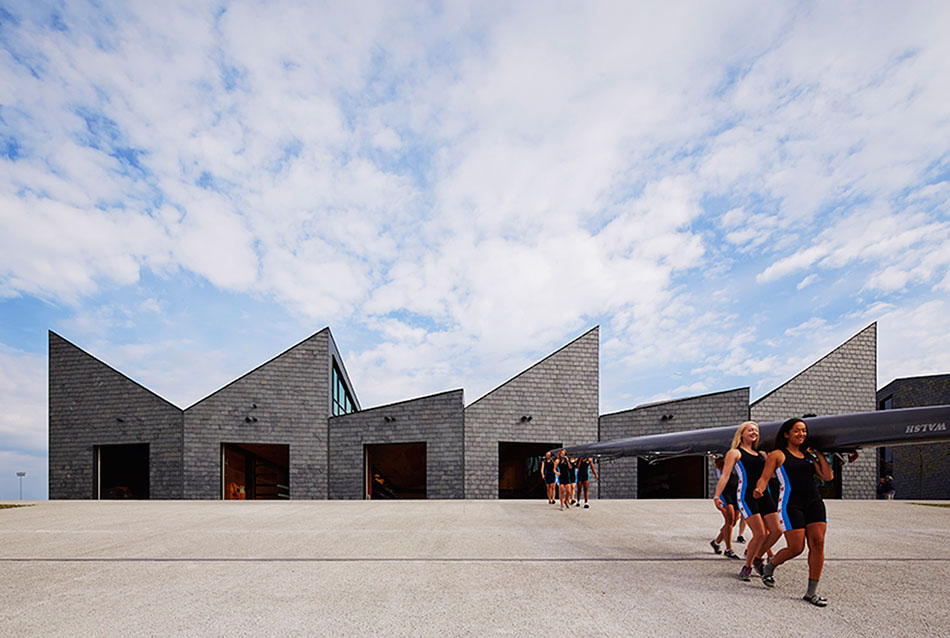 the building is clad with durable zinc and slate panels

‘rahm emanuel (mayor of chicago) came up with the idea of engaging and allowing access to the water through the design of several boathouses for chicago youth,’ said jeanne gang, speaking at the 2015 BODW conference in hong kong. ‘we took the idea of the motion of the oars and translated that into a roof form, with two truss shapes that create a dynamic roofscape bringing light into the building. we really had a very limited budget with this public project, and we used very simple materials.’ 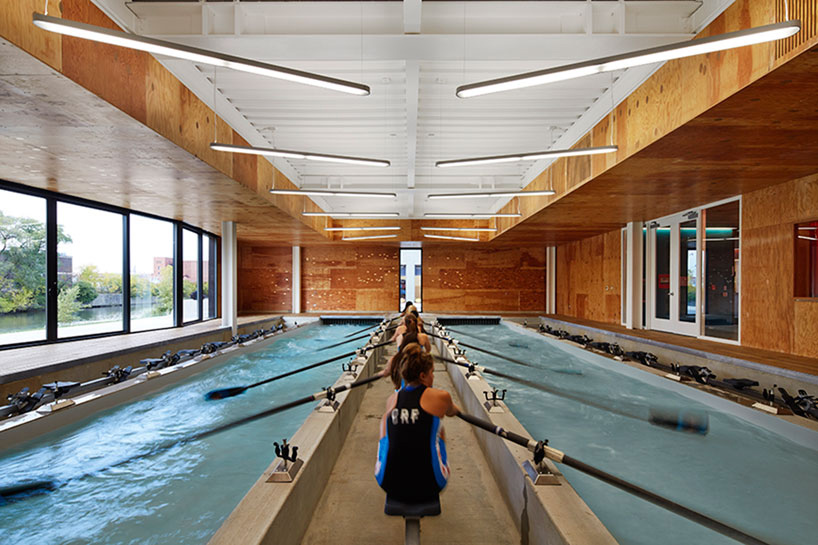 an indoor tank supports classes for members of the public

‘now there are many young people from all over the city that row out of this boathouse, and engage with the chicago river directly,’ continued gang. ‘it’s an incredible experience rowing down this river, as you end up going right through the middle of downtown chicago. there are also programs for many different people, including veterans and other groups that can come in and learn how to row. it really is exciting to see people using the river front in this recreational way — a place that was formerly only open to private industry.’ 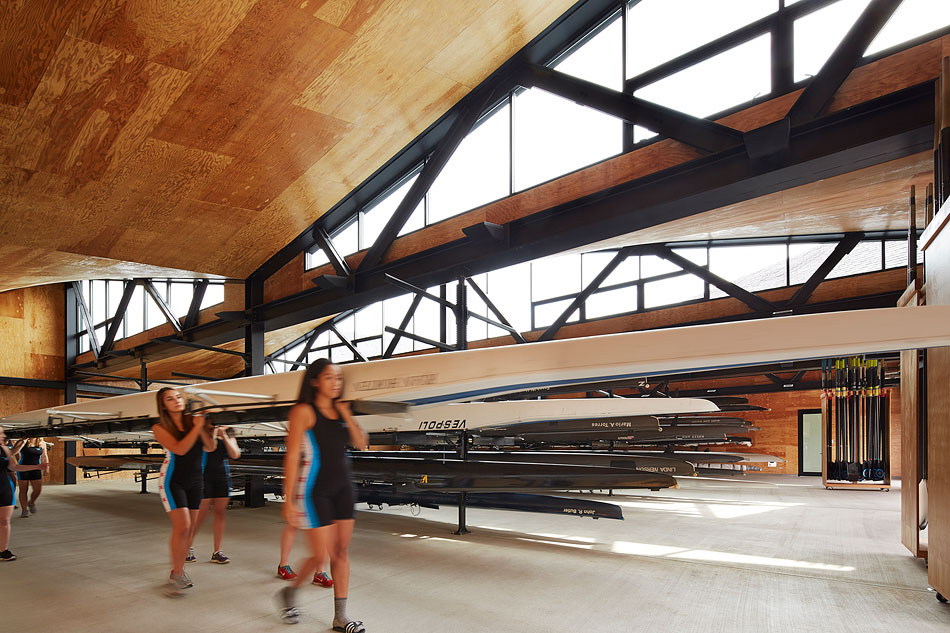 the AIA’s national institute honor awards program recognizes achievements for a broad range of architectural activity. its motives are to elevate the quality of architectural practice, establish a standard of excellence, and inform the public expectations for the breadth and value of architecture. ‘I hope this national award recognition for the boathouse will increase enthusiasm for good design and public space in chicago and invite people to share in our river’s continued ecological and infrastructural revitalization,’ commented jeanne gang. 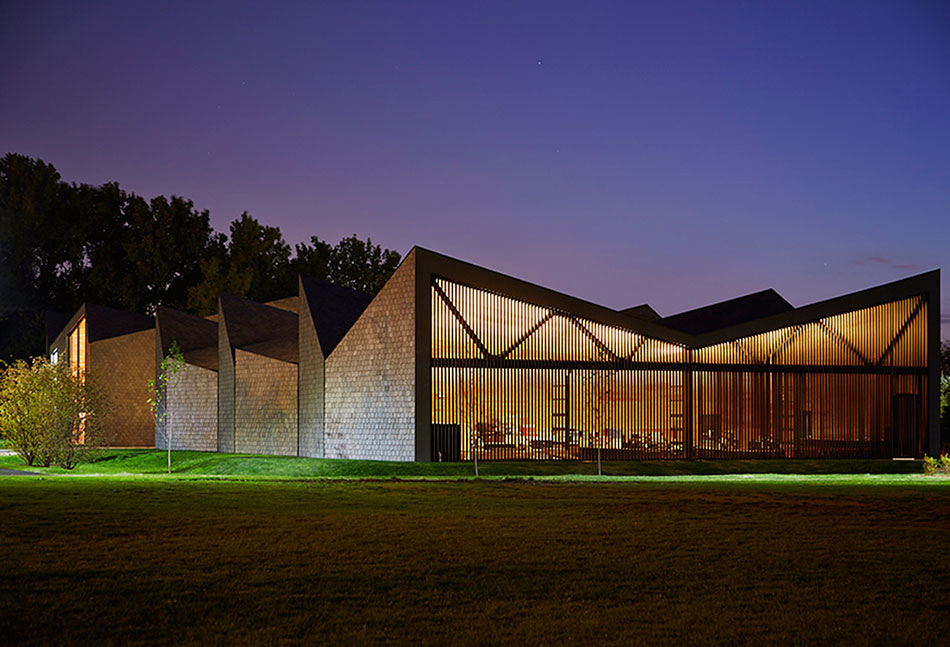 studio gang’s ‘eleanor boathouse’, located further along the river’s south branch, is currently under construction and is scheduled for completion later in 2016. the series of boathouses, together with the increased access granted by projects such ‘the chicago riverwalk’ by ross barney architects, will connect a number of civic spaces along the waterway. see designboom’s previous coverage of the WMS boathouse here.

the project seeks to revitalize the city’s waterway

jeanne gang was a speaker at the 2015 business of design week conference in hong kong.