last week, jalil peraza — a long-time collaborator of kanye west — revealed two images of a ‘low income housing scheme, made of prefabricated concrete and expanded polystyrene components’. the project is reportedly the first result of yeezy home, west’s architecture venture, which was first made public in may 2018. with the announcement, west declared that he was looking for ‘architects and industrial designers who want to make the world better’.

to that end, it appears that kanye west has teamed up with petra kustrin, jalil peraza, and nejc skufca to design a prefabricated prototype house. as noted by the real deal, the public release of the renderings come weeks after west divulged his plans to build a real estate empire. in a 105 minute interview with charlamagne tha god, west stated that real estate development was ‘the next frontier’ for him, saying: ‘I’m going to be one of the biggest real estate developers of all time.’

elsewhere in the wide-ranging interview, which can be viewed at the top of this page, west also talks about leaving NIKE to work with adidas and his relationship with architecture-trained fashion designer virgil abloh. the interview concludes with west showing charlamagne a grassy hilltop on a 300-acre property he owns, which west says will be his first community, comprising five homes. 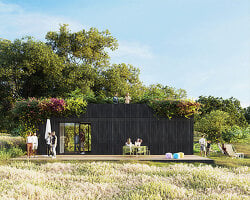 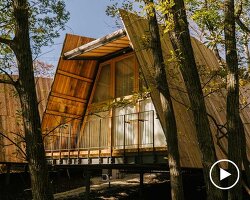