situated within the japanese city of nagasaki, KEI SASAKI / INTERMEDIA has designed the ‘atago nursery‘. the project – conceived for approximately 140 kids between the ages of 0 and 6 – is based on the client’s request of creating organically-shaped spaces, better suiting children’s imagination and allowing them to play freely. in keeping with this concept, the architect decided to form a building which embraces the natural slope of the site, rather than employing costly and intrusive excavations to create a flat level. 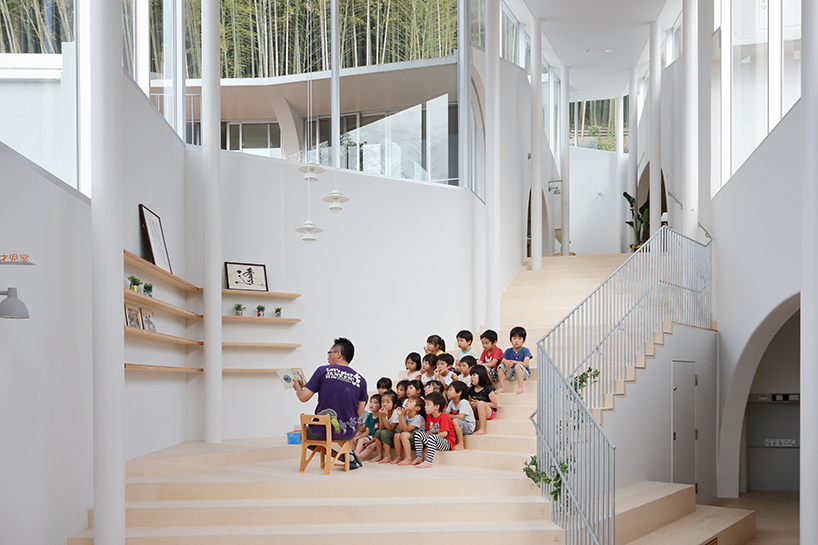 upon entering the nursery at the street level entrance, kids are greeted by a large staircase to ascend to the various levels. this space, which is filled with natural light and supported by slim columns, appears to resemble the forest which can be seen behind. the plan by KEI SASAKI / INTERMEDIA forms a sort of curved spine, with the seven children’s rooms on the upper floor tracing the shape of the site and resulting in naturally-shaped spaces to match the terrain. within these areas, the rib-structure, which functions as both columns and beams, is expressed as curved arches, further adding to the idea of an organic architecture. 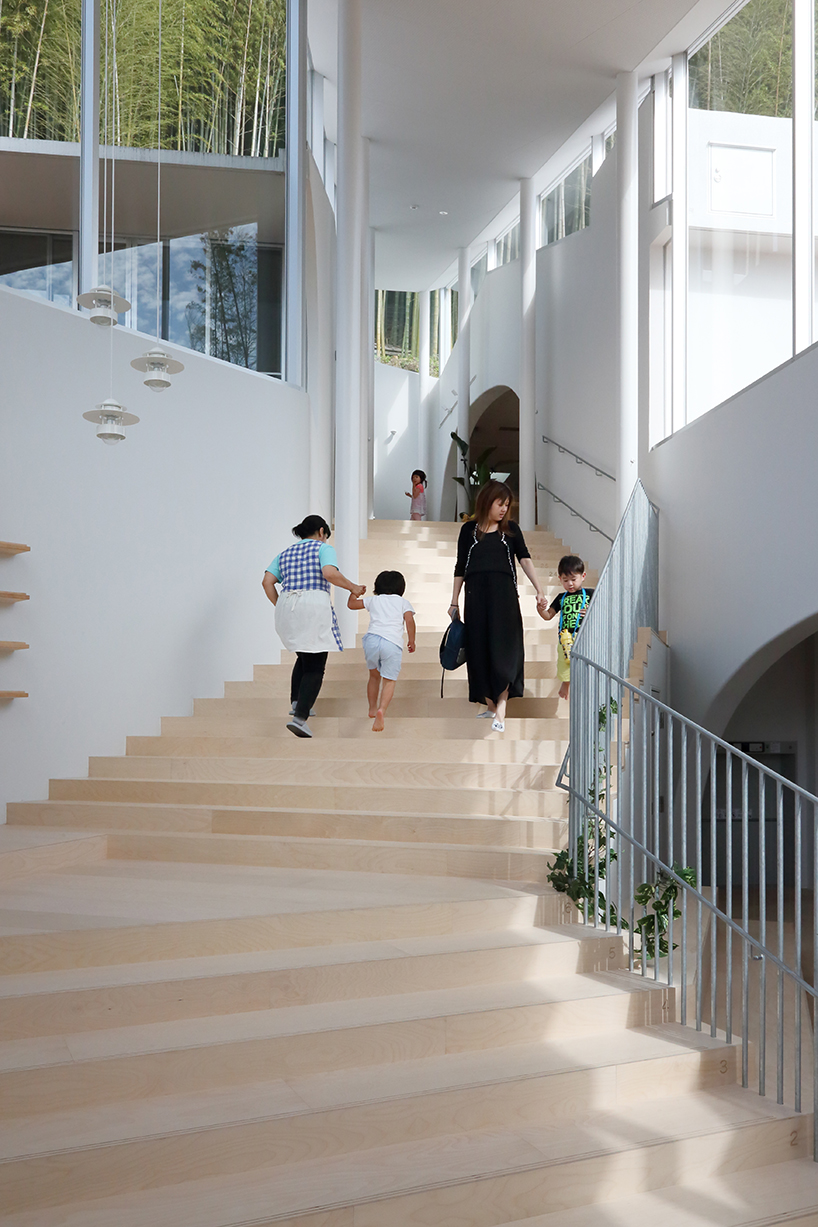 the main staircase is filled with an abundance of natural light

with the stepped architecture that has been generated, impressive views are gained out over the cityscape of nagasaki. from the children’s rooms, access can be made directly to a large playground area, forming a dialogue between the indoors and outdoors and stimulating a connection to nature. to achieve the structural stability that is required with a sloping site, the rear elevation on the ground level of the building is formed as a retaining wall. rather than imposing a rectilinear box, KEI SASAKI / INTERMEDIA instead decided to harness the natural topography of the location, resulting in a nursery that aims to provide the optimum space for a child’s development and enjoyment. 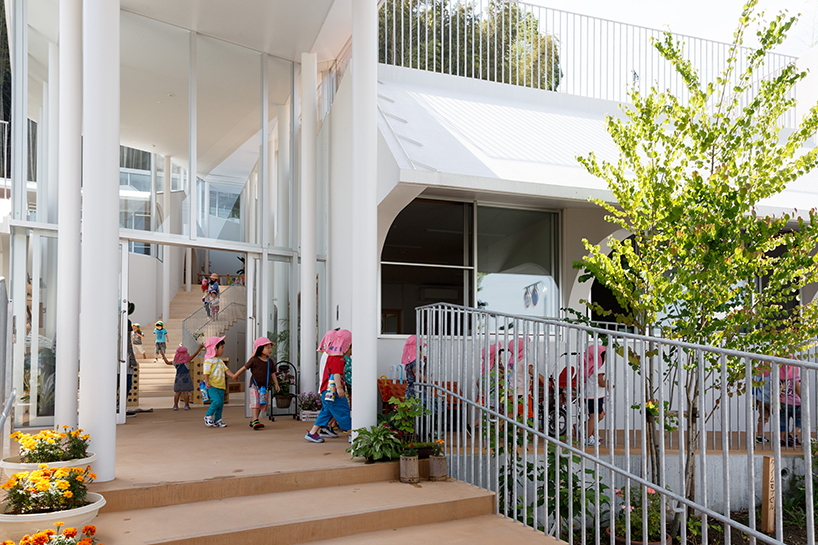 the interior spaces connect to the outdoors 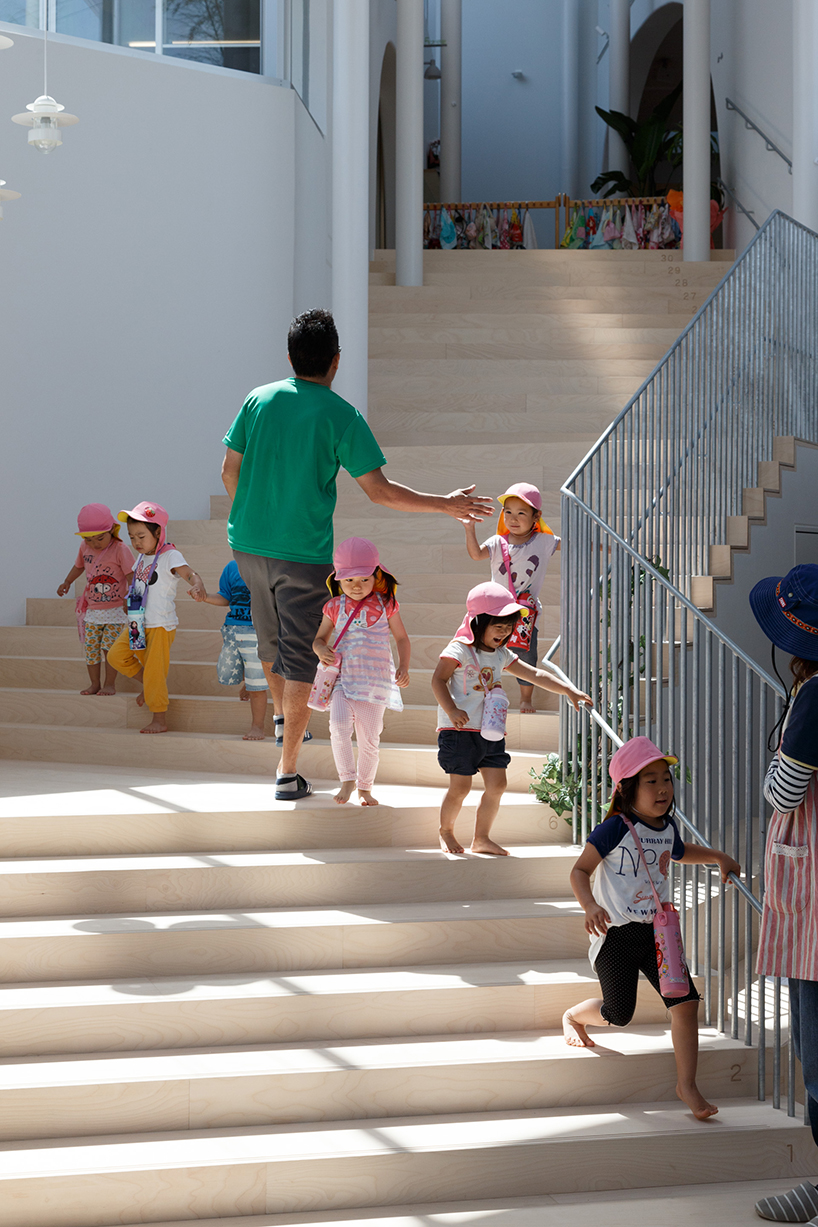 the children of the nursery enjoying the space 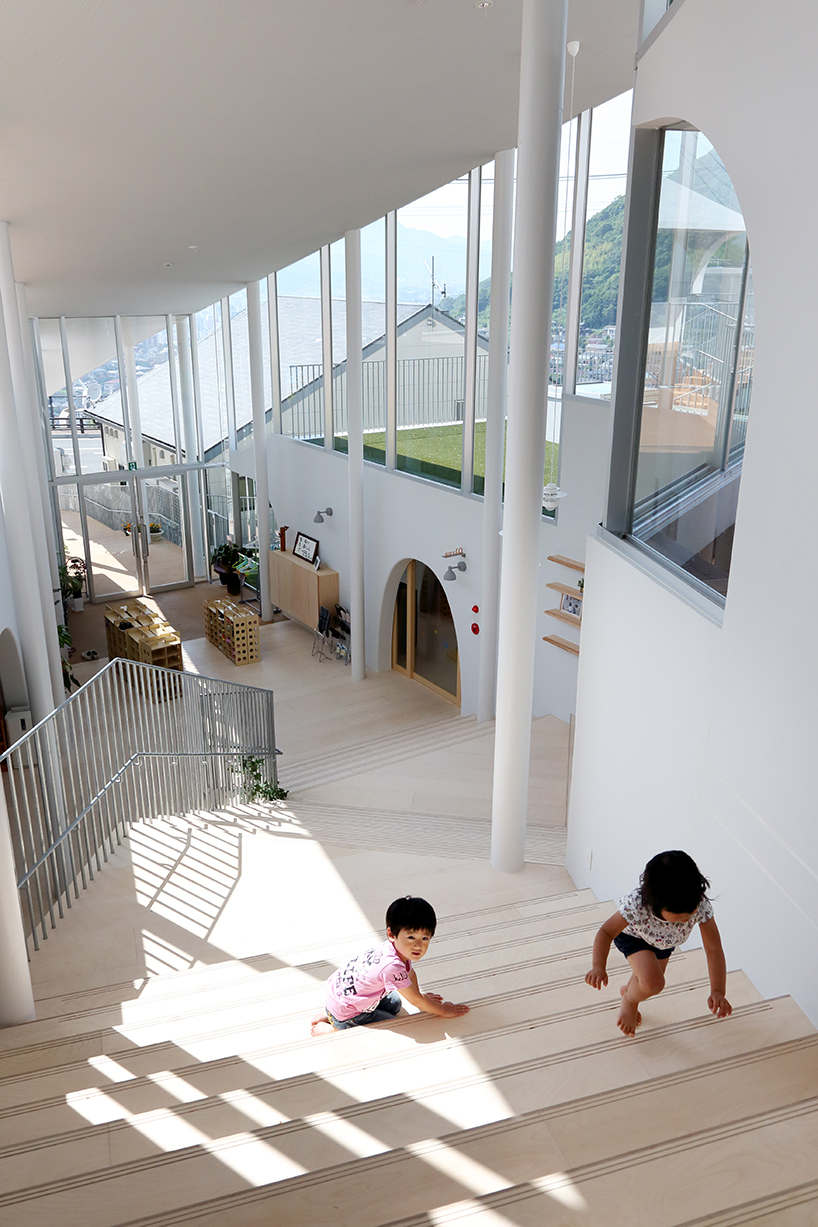 view from the top of the staircase 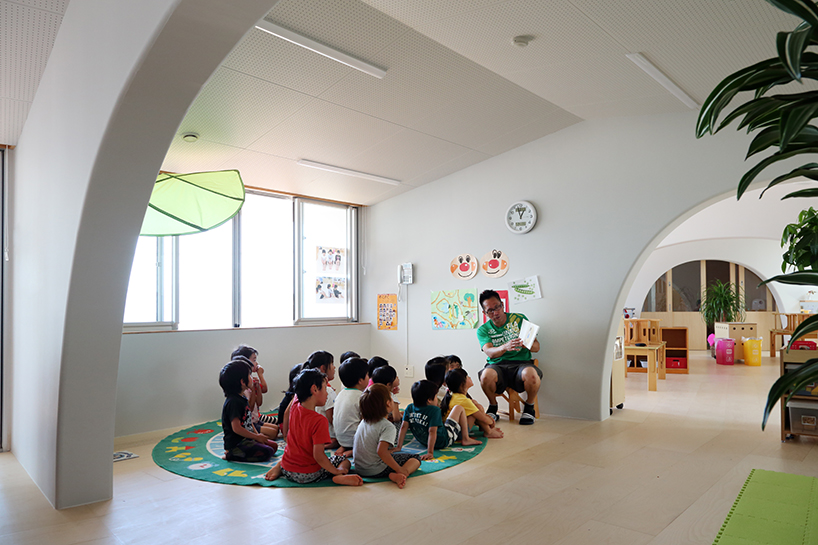 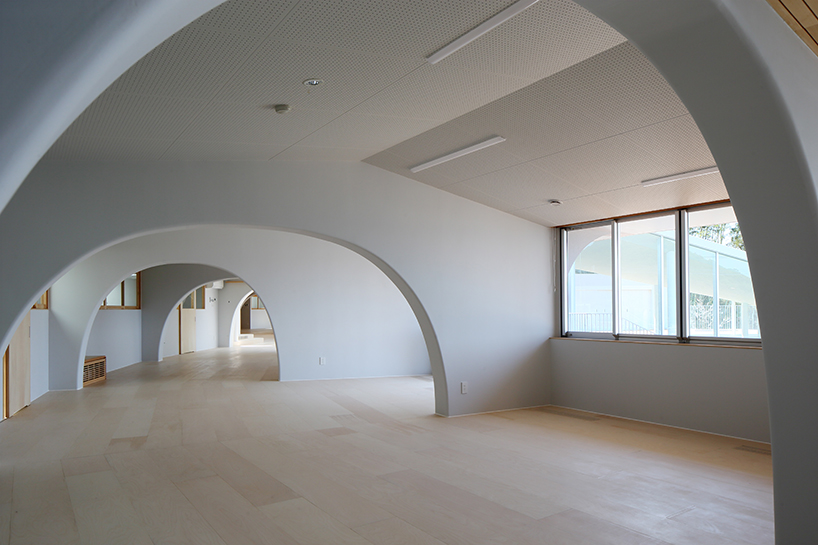 view of the interior space with the organic-shaped structure 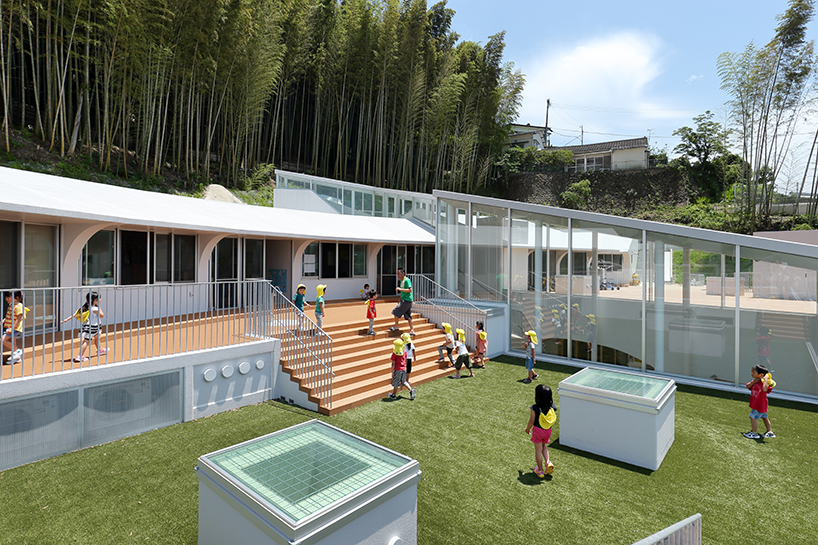 the rooms connect to an outdoor playground area 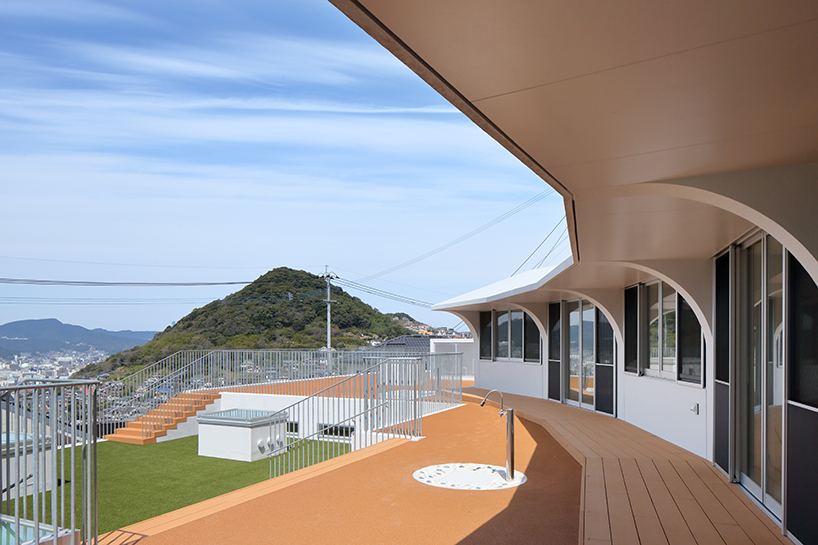 view over the playground 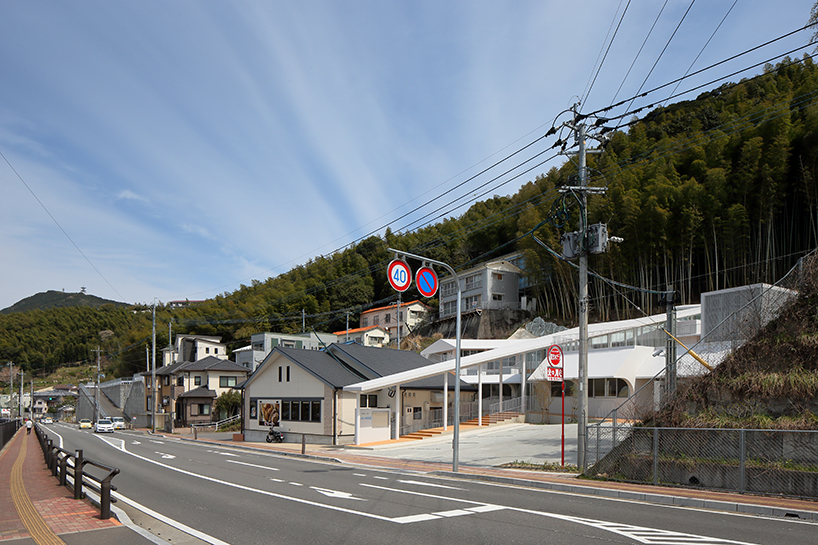 the nursery viewed from the street 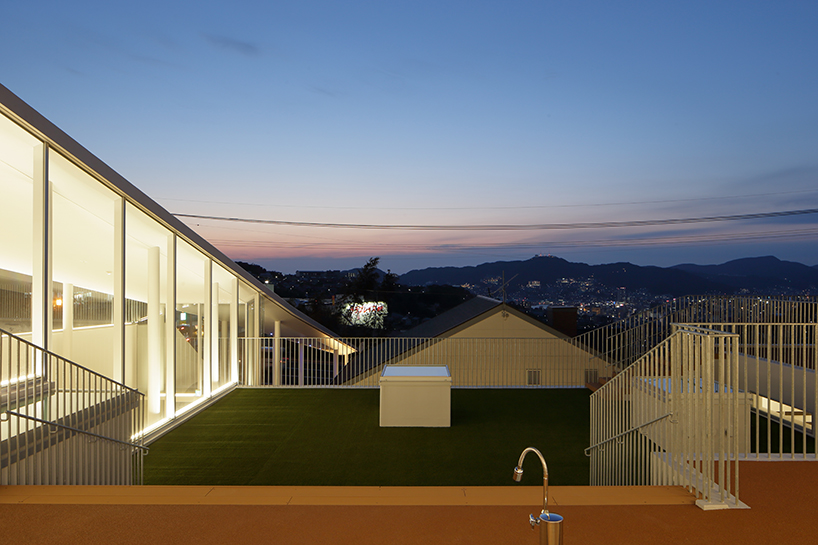 view from the playground at sunset 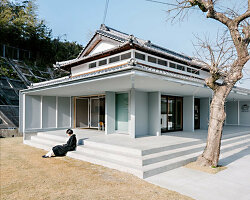 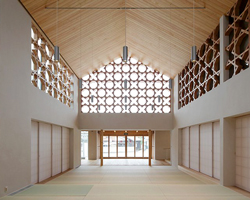 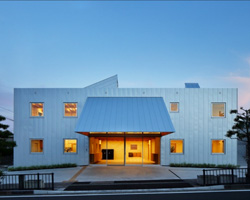