‘arbor 15’ by kerimov prishin architects, moscow, russia view of wooden structure and concrete foundation for the table from the house

‘arbor 15’, an open air pergola structure for a single family residence in moscow, russia has been designed by russian practice kerimov prishin architects and executed in collaboration with a local television network. the floor plan and semantic differentiation of 3 zones includes the ‘kitchen-furnace’, ‘dining room-drawing room’ and ‘terrace-scene’. the ‘kitchen-furnace’ is a uniform block consisting of a table-top under which boxes, cases and furnaces are stored within two niches, including a brazier and samovar. formed into a monolithic concrete surface, the space also accommodates tea preparation with a separate flue. the cool color palette is countered with a basket filled with cones and the brass vessels.

the ‘dining room-drawing room’ is identified by a long console table behind which the family can gather. structurally the piece is a metal skeleton sheathed with wood and fixed at one end to a pedestal which, in turn, is continuation of a concrete foundation. adjacent to the table are open regiments for storage of every possible utensil. the fixed element may not be transferred, changed, cleaned, it is an integral architectural object, the structure’s ‘heart’. the ‘terrace-scene’ is a multipurpose space which transfers activity during hot weather to an outdoor deck to sunbathe and drink tea on cozy padded stools. during the evenings, the slatted facade may be opened with a series of bifold doors in addition to a curtain to host performances prepared by children. garden chairs become the impromptu audience for the summer theater. additional curtains contribute to an air of drama, allowing the young actors to make their entrance upon the stage as their performance begins. 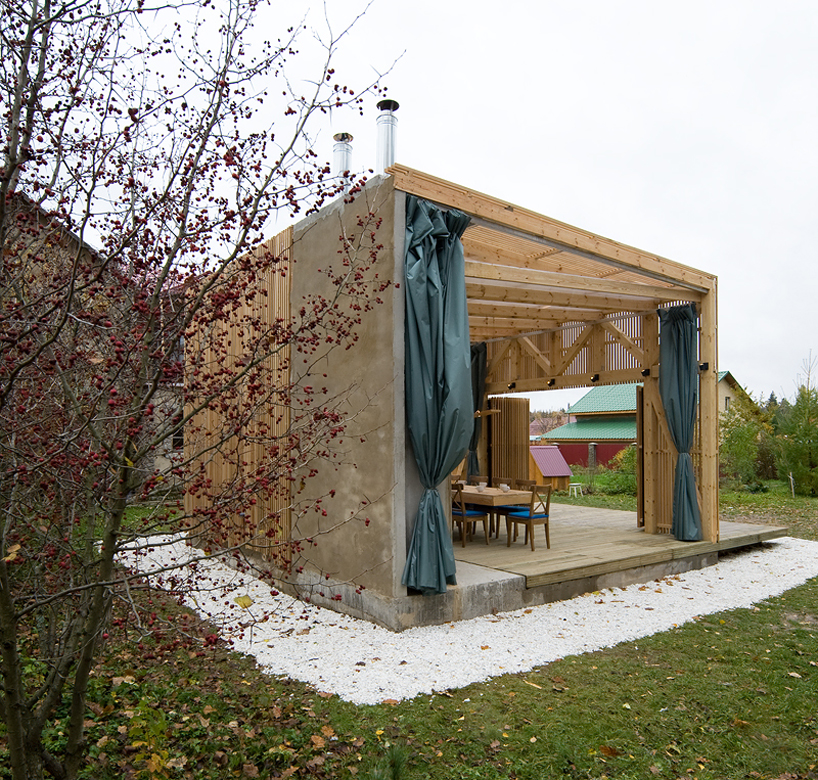 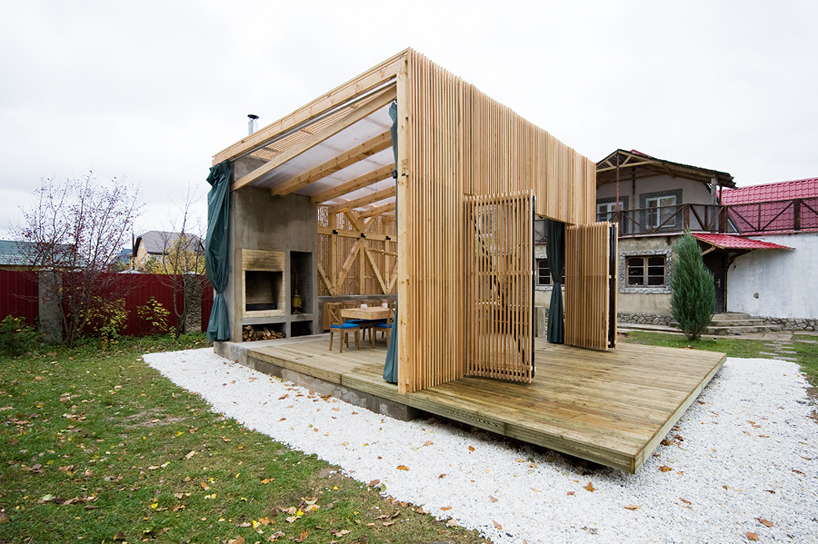 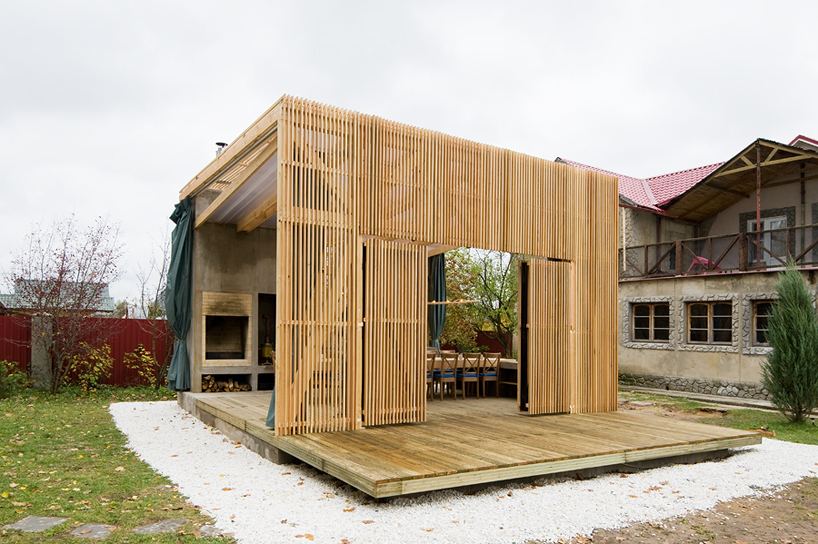 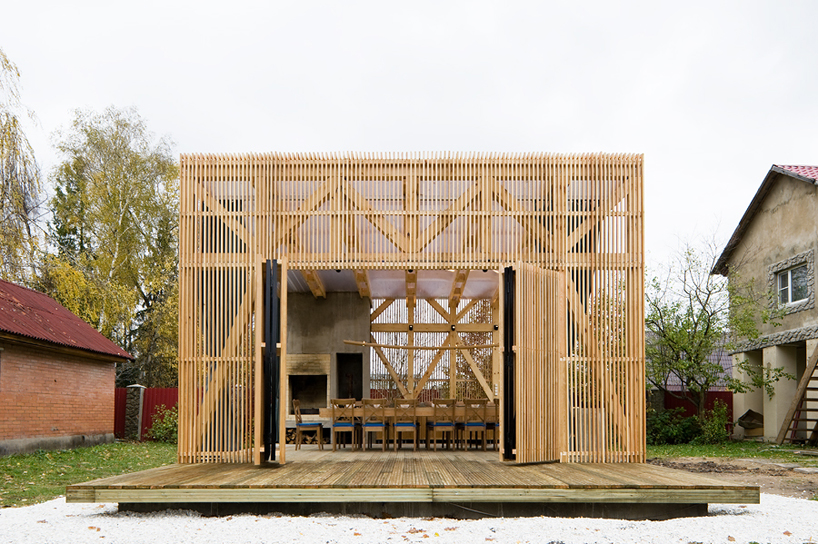 facade in the open position 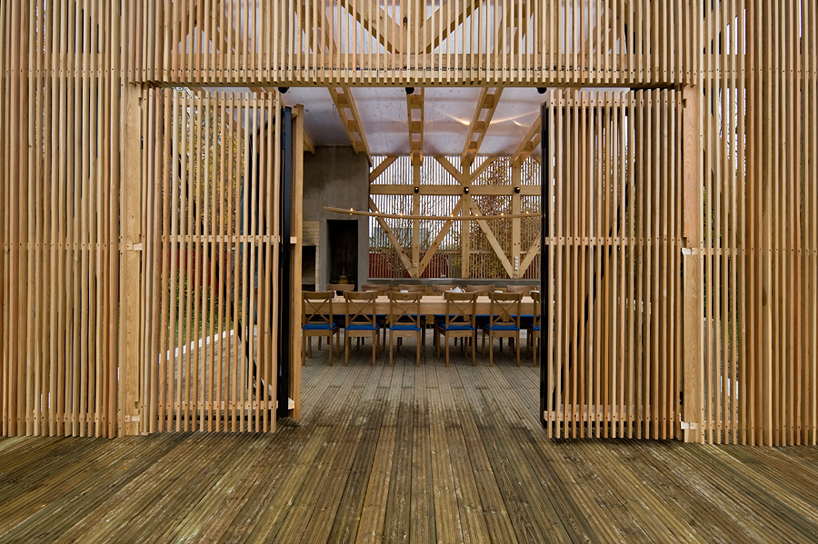 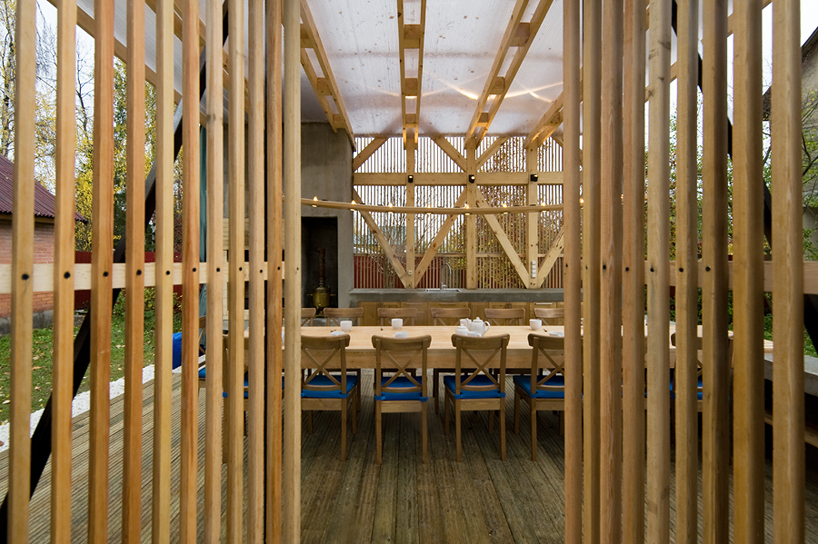 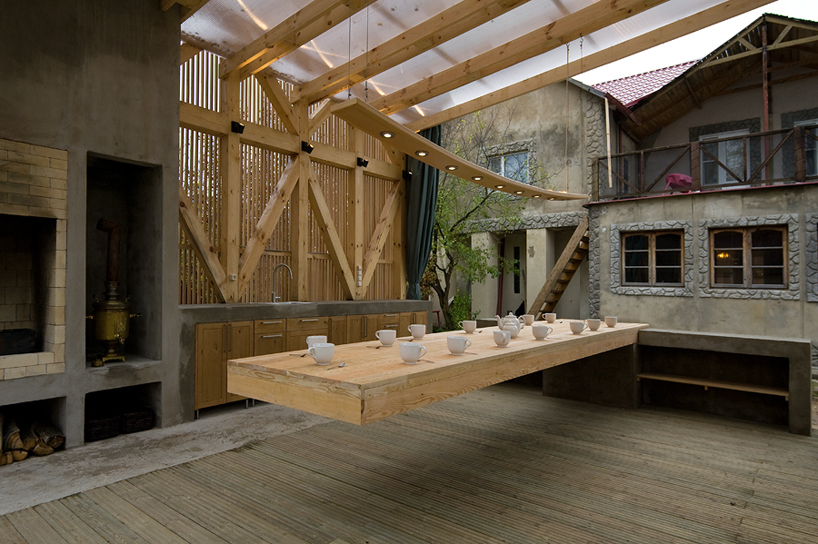 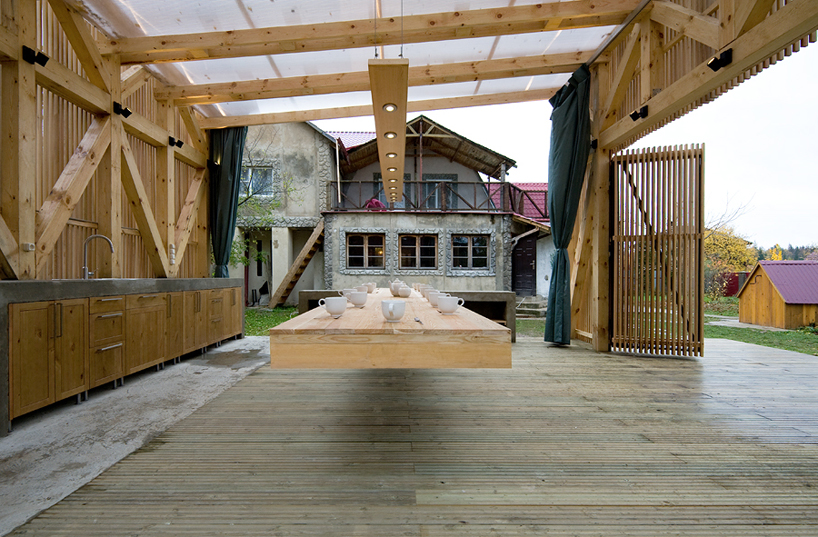 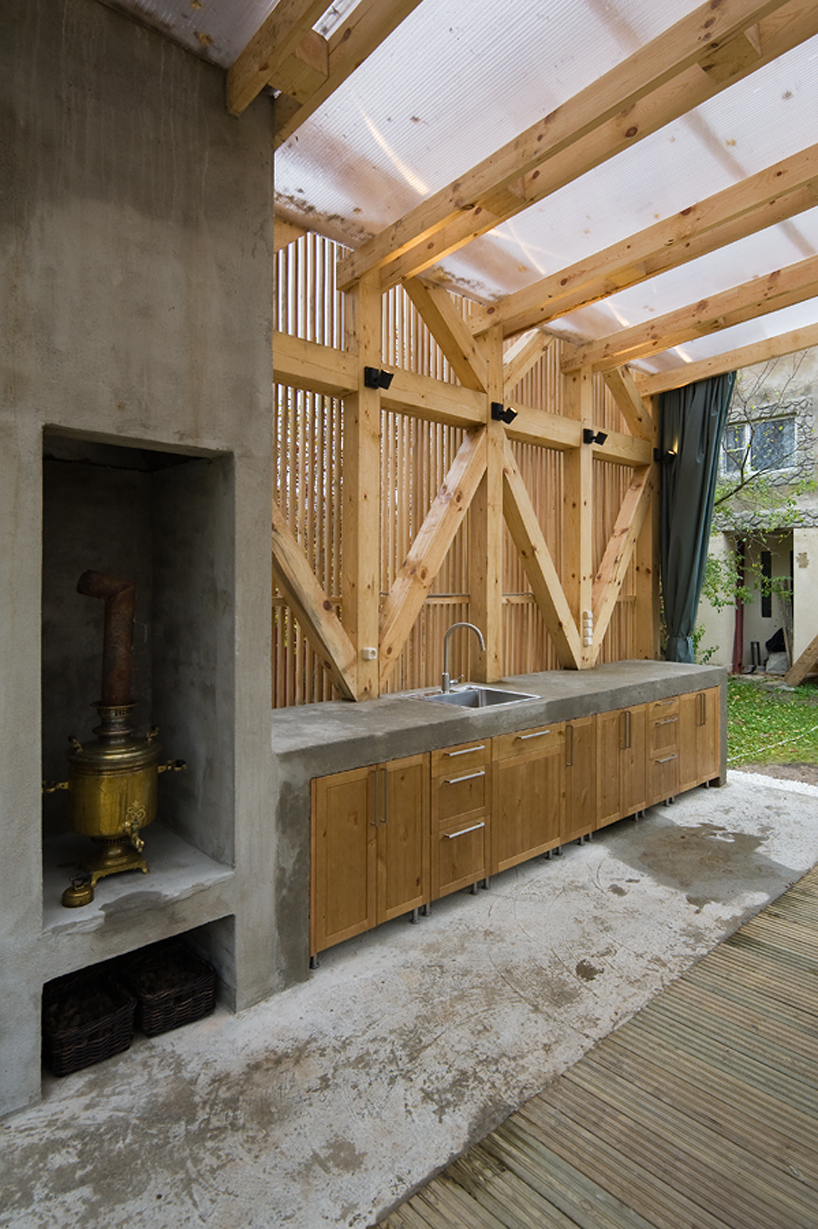 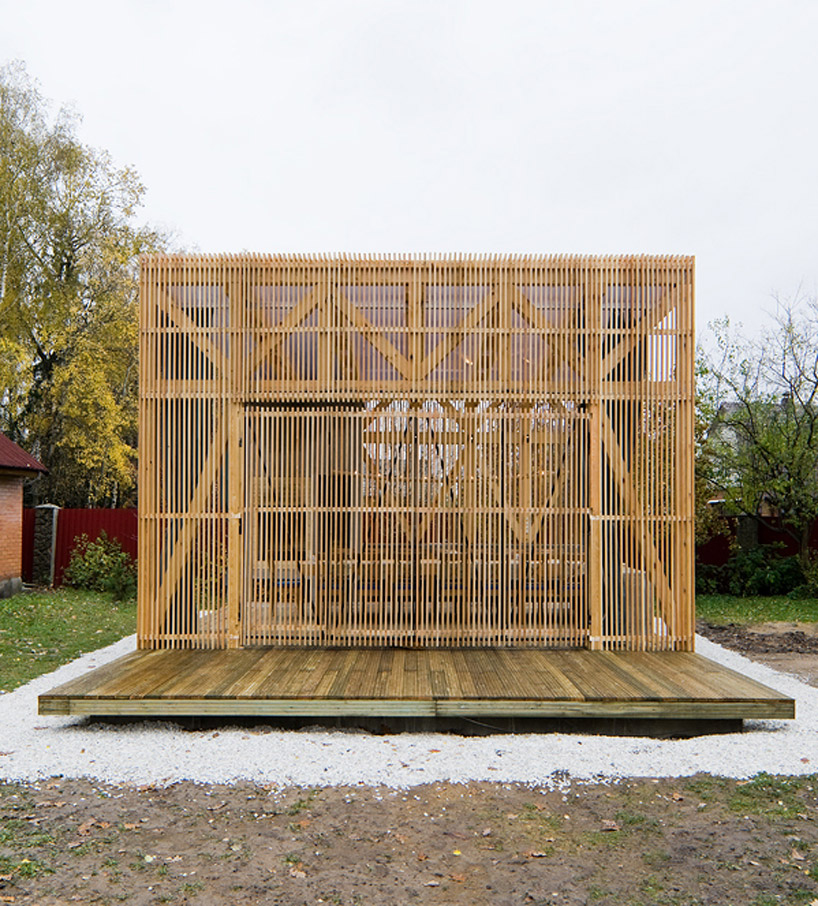 facade in the closed position 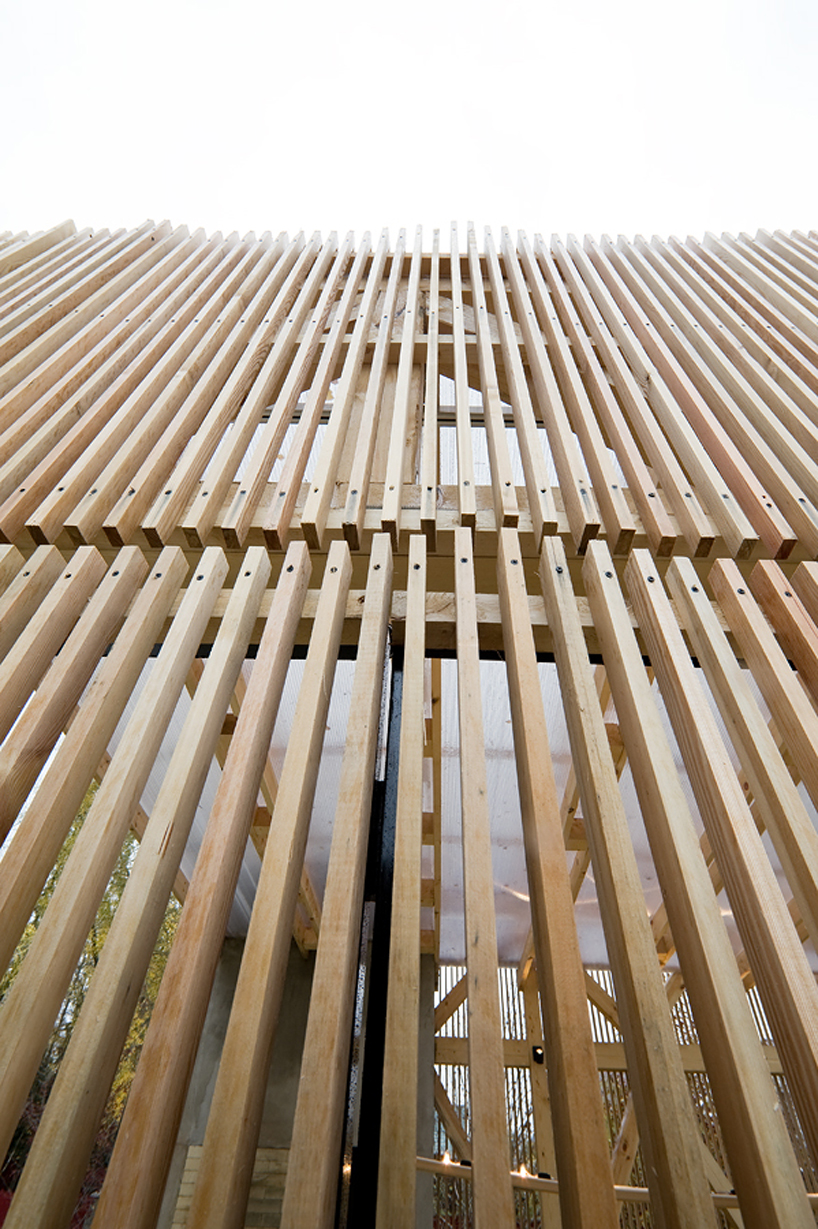