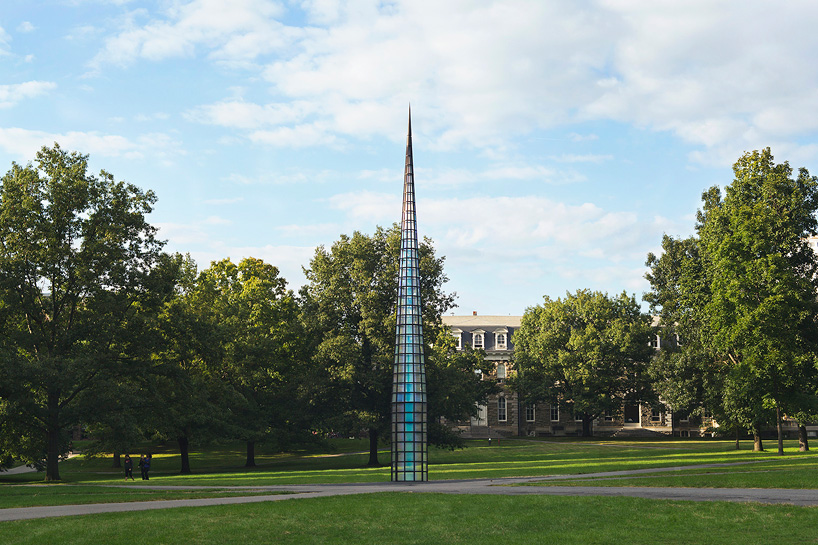 as part of the 2014 CCA biennial, korean-born conceptual multimedia artist, kimsooja has created a 46 foot high, 4.5 foot diameter needle-shaped steel structure, piercing the landscape at cornell university’s arts quad in ithaca, new york. ‘a needle woman: galaxy was a memory, earth is a souvenir’ has been made in close collaboration with architect jaeho chong and the wiesner nanomaterials lab at the university.

drawing reference from the perspectival direction of nanotechnology and french philosopher henri bergson’s thoughts on memory — as related to metaphysical perception — kimsooja has investigated the metaphorical relationship of needlepoint to notions of distance and memory threading across a cosmic scale. ‘an inward directionality found in visual perspective employed by nanoscience convinced me how much nano-techniques are an inverse expression of our perspective of the universe, as well as being related and interconnected to observations in art making.’ she elaborates. 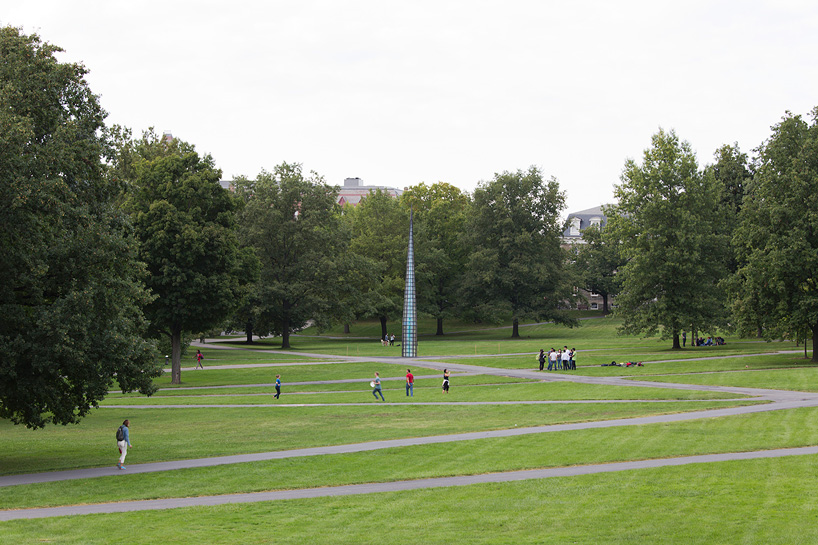 ‘a needle woman: galaxy was a memory, earth is a souvenir’ pierces the university landscape
all photography by jaeho chong, aaron wax, ferdinand kohle © 2014 kimsooja studio

made for an intimate exterior and interior experience, the structure’s grid-like spine is fleshed out with acrylic panels to form a crystalline, transparent pavilion. each of the sheets have been individually treated with an iridescent nanopolymer, transforming the sleek structure into a radiant spectrum of ever-changing color. the molecularly engineered ‘block copolymer’ — created in collaboration with cornell nanomaterial engineer and chemical scientist ulrich wiesner — considers the refractive qualities of natural light and maximizes its potential. the iridescent material shares similar attributes to those occurring in nature, on the wings of butterflies or shell of beetles. a mirrored interior floor optically doubles its scale, extending simultaneously from earth to sky. 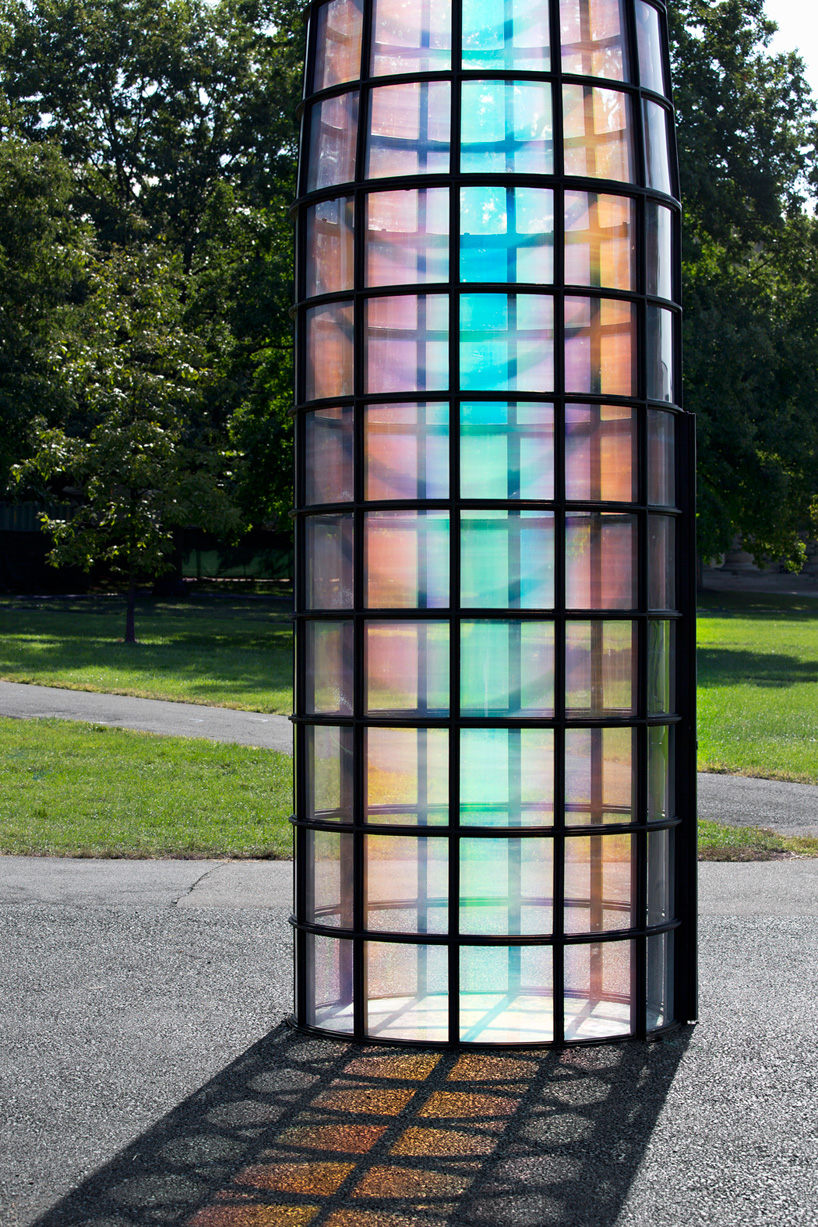 the iridescent material shares similar attributes to those occurring in nature, on the wings of butterflies or shell of beetles

‘working at an architectural scale inspired us to transform a micro-molecular phenomenon at the nano-scale into a tangible structure, thereby unveiling a new spatial dimension to the human senses. once installed, the iridescent needle form gave the entire arts quad an artistic definition.’ — jaeho chong 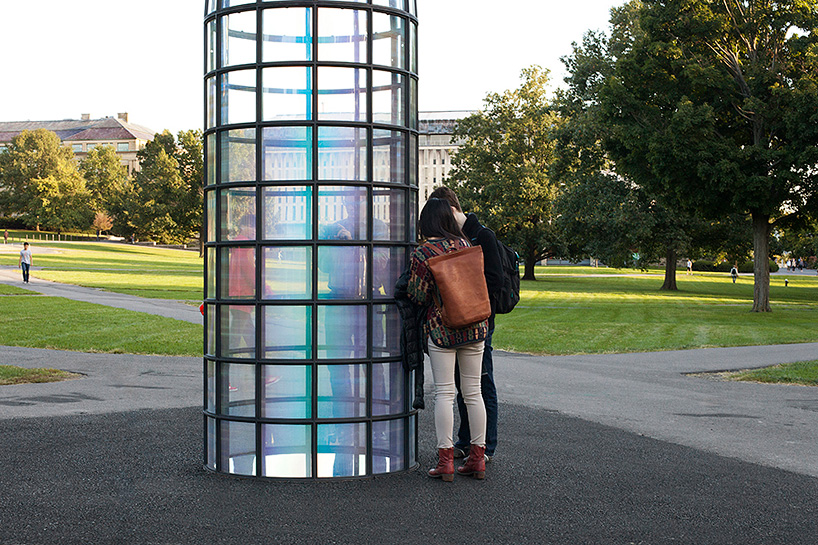 while the assessment of earth as a ‘souvenir’ – as suggested in the title — imply an object or gift, the idea of earth as a readymade functions as an aperture through which to view kimsooja’s artistic evolution. ‘a needle woman: galaxy was a memory, earth is a souvenir’ is a continuation of the artist’s decades long exploration of the concept of the needle and the notion of bottari, explored in a number of site-specific projects — most recently in the korean pavilion in the biennale di venezia, 2013, previously featured by designboom, here. 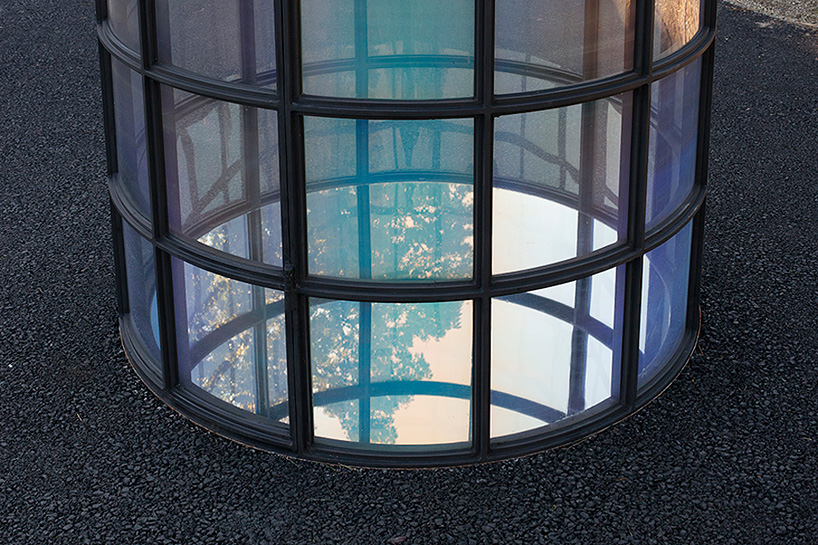 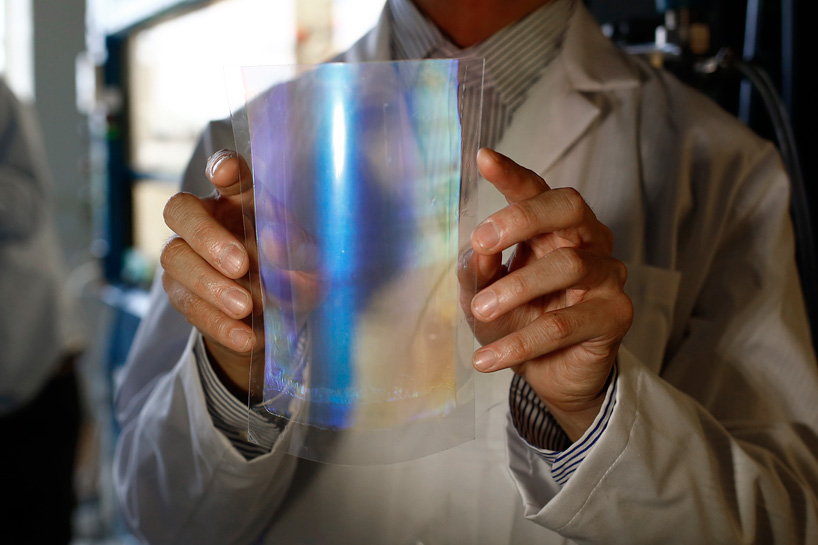 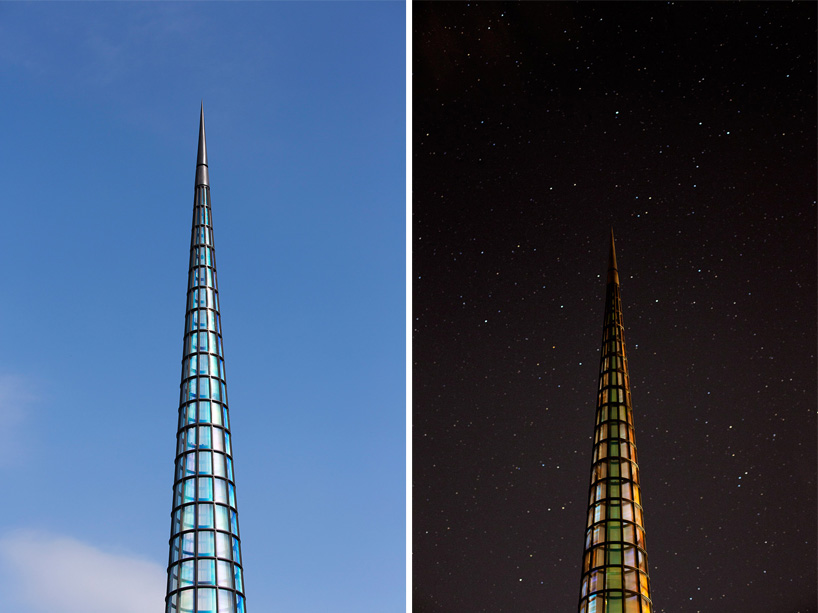 by day and night, the panels produce varying degrees of color and reflection 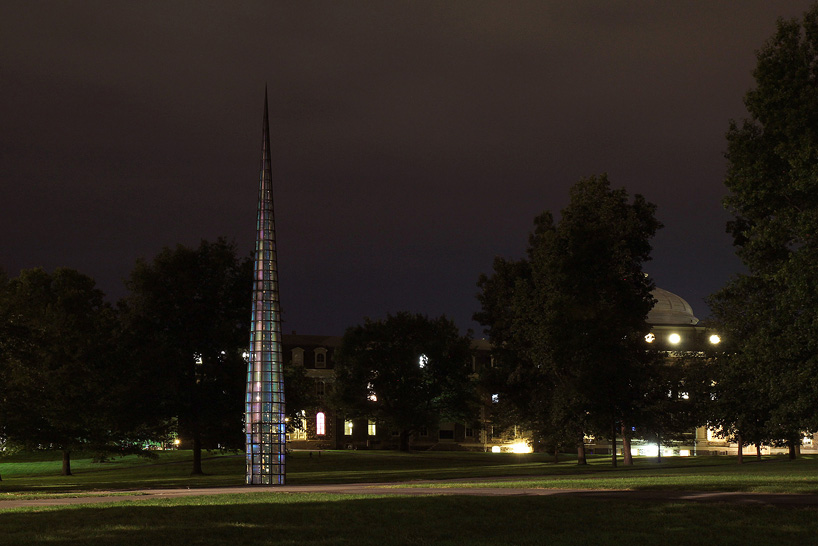 even by night, the iridescent material glows like a beacon of ever-changing color 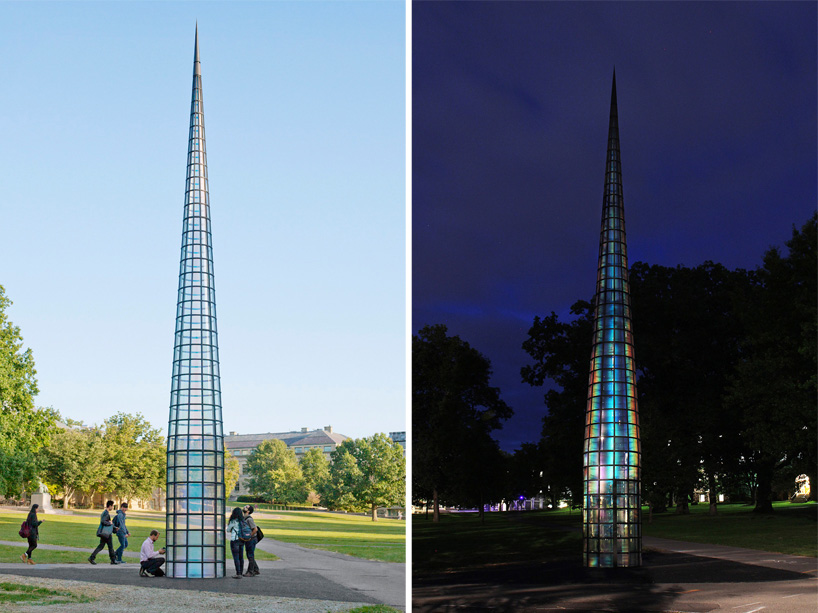 the varying color changes are evident throughout the passage of time 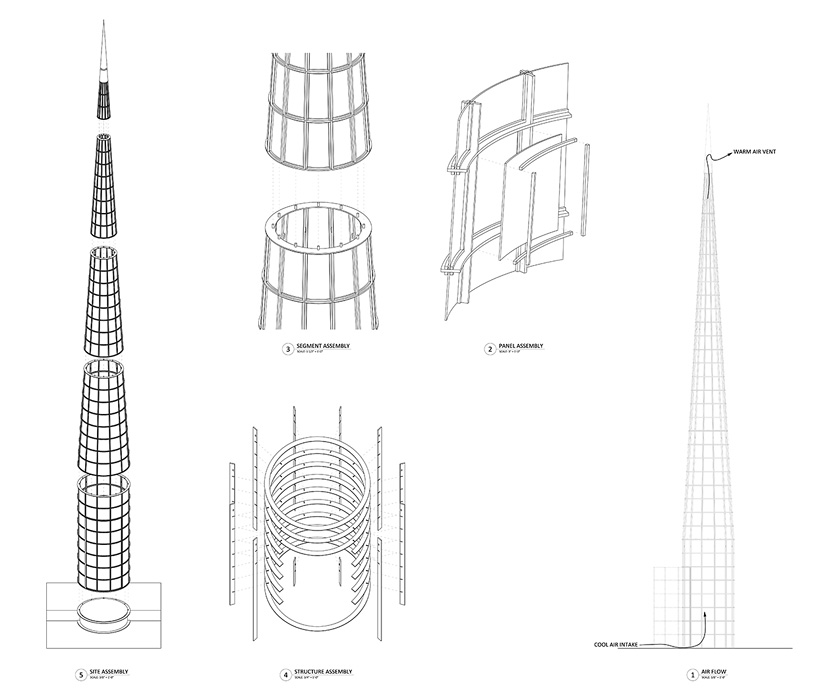 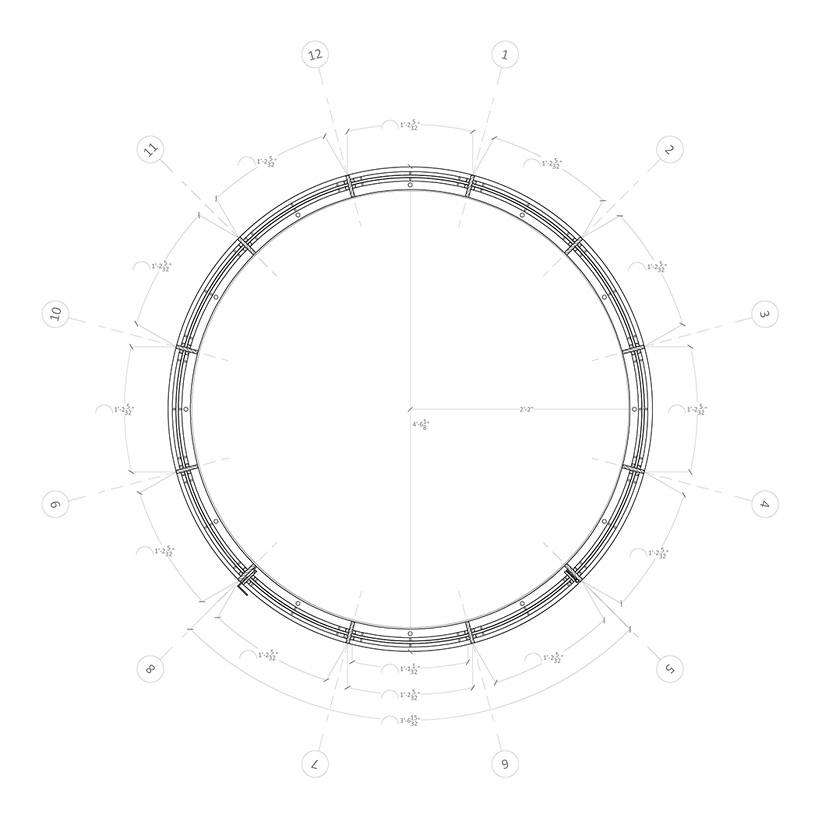 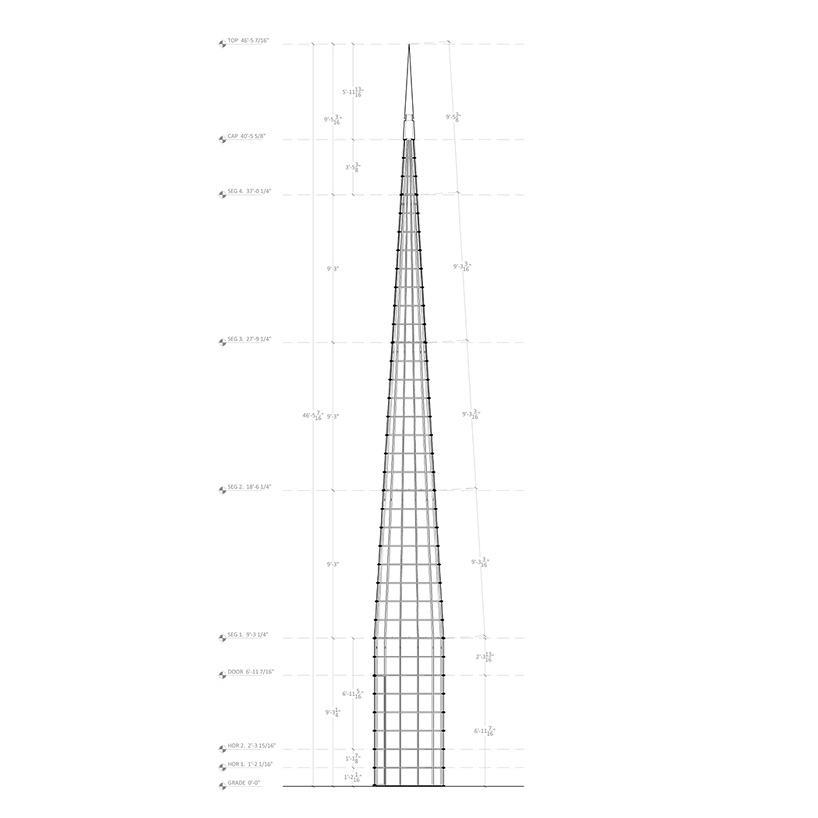 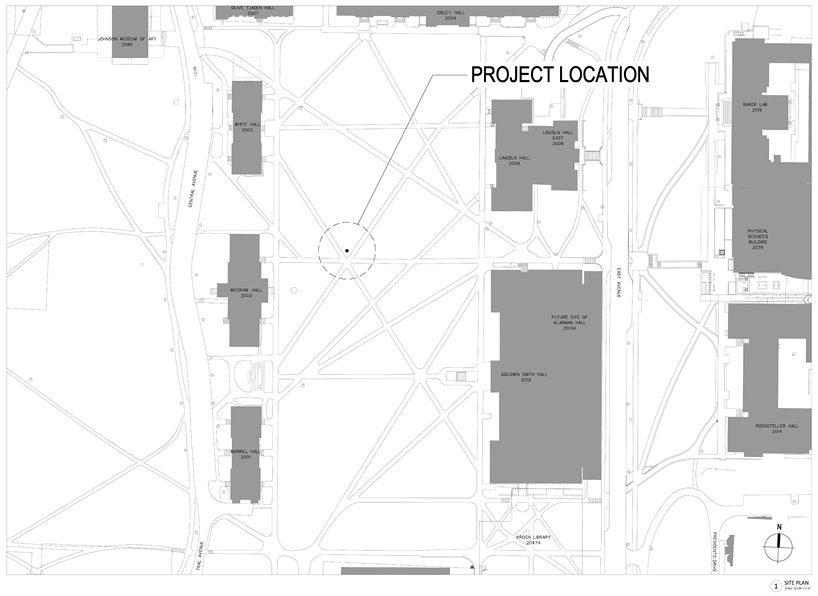 Mar 31, 2019
kimsooja quilts a chapel with iridescent light and sounds of her own breathing