marcel breuer's neumann residence in upstate new york is up for sale for $4.2 million
27k views

the korean pavilion at this year’s venice architecture biennale is a documentary of change in the metropolis of seoul. ‘re.place.ing‘ aims to show and illustrate a record of transformation in the historic city which was a result from the recent population influx and the accelerated economic growth after the korean war. to explore the broad theme, the pavilion takes a closer look at a variety of microcosmic elements such as the replacement of residential environments and public spaces, the states of expansion, the deletion and insertion of urban tissues, and the city’s continuously sustained vitality. 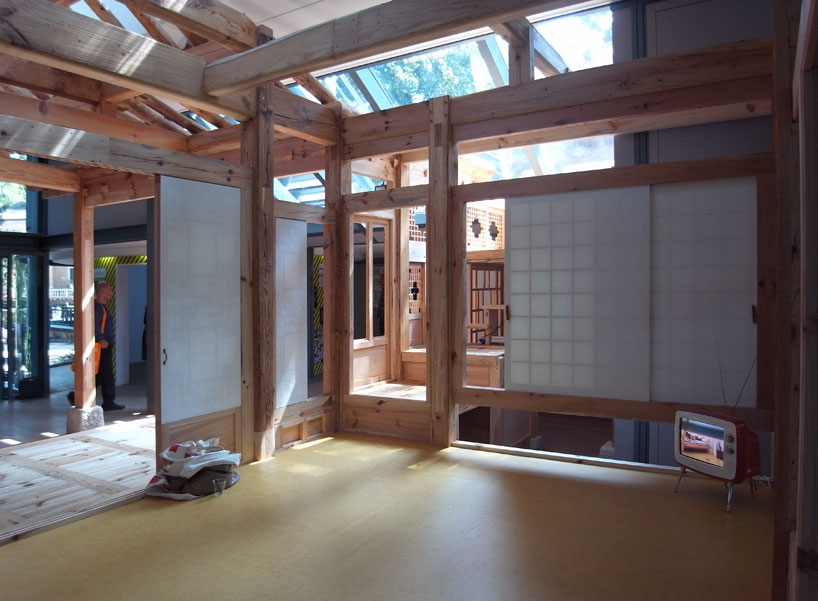 the biggest installation within the pavilion itself is ‘hanok’ by cho, jung goo. ‘hanok’ is korea’s traditional wooden dwelling and architecture prototype which is still a living part of seoul. built from pieces of several hanoks in seoul which were facing demolition, the parts were brought to venice and integrated into the existing building. viewers are invited to enter the ‘hanok’ and experience the configuration of the inner spaces and courtyard and how it communicates with both the rest of the exhibition space and venice itself. 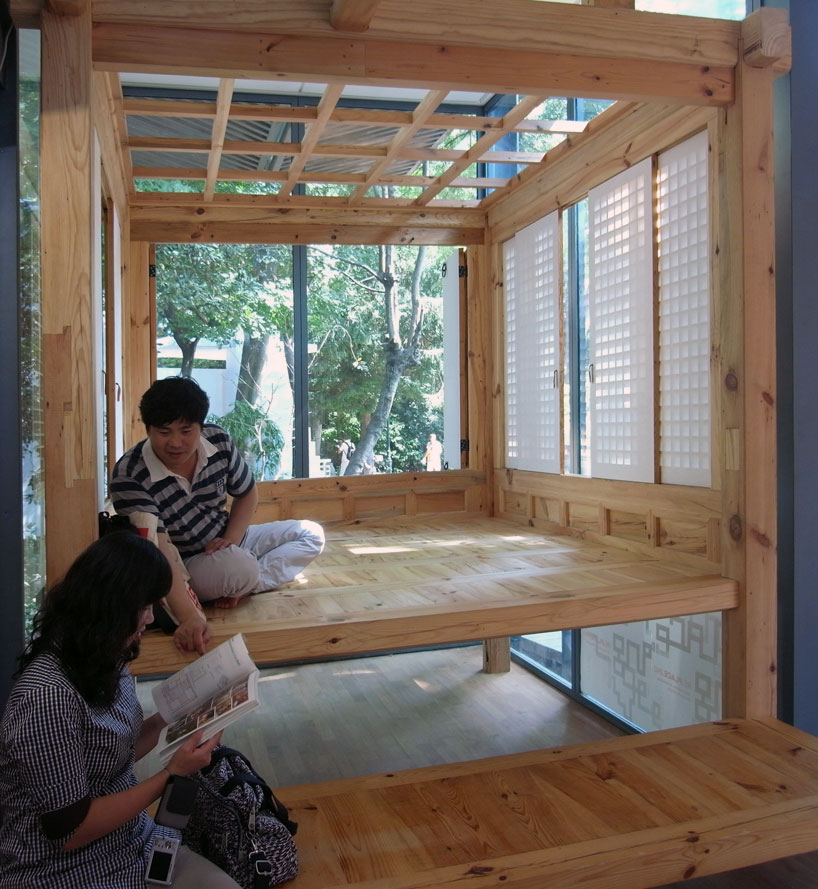 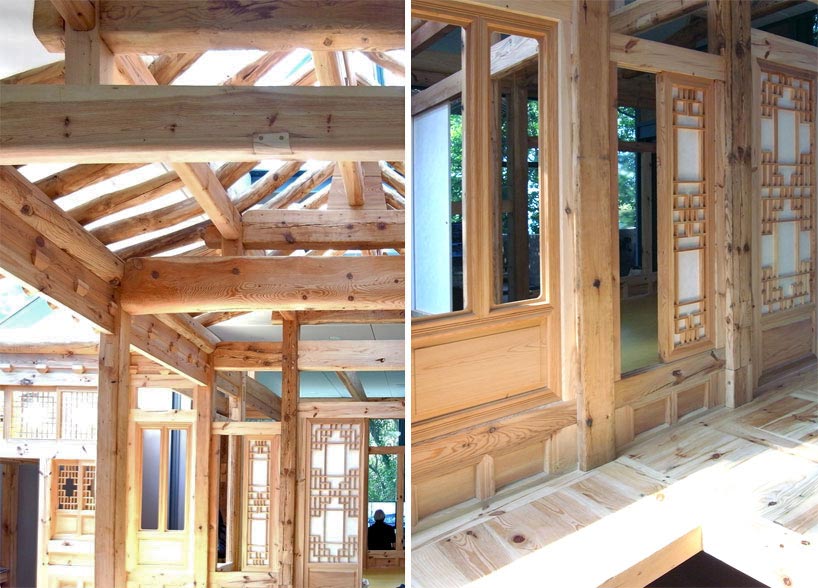 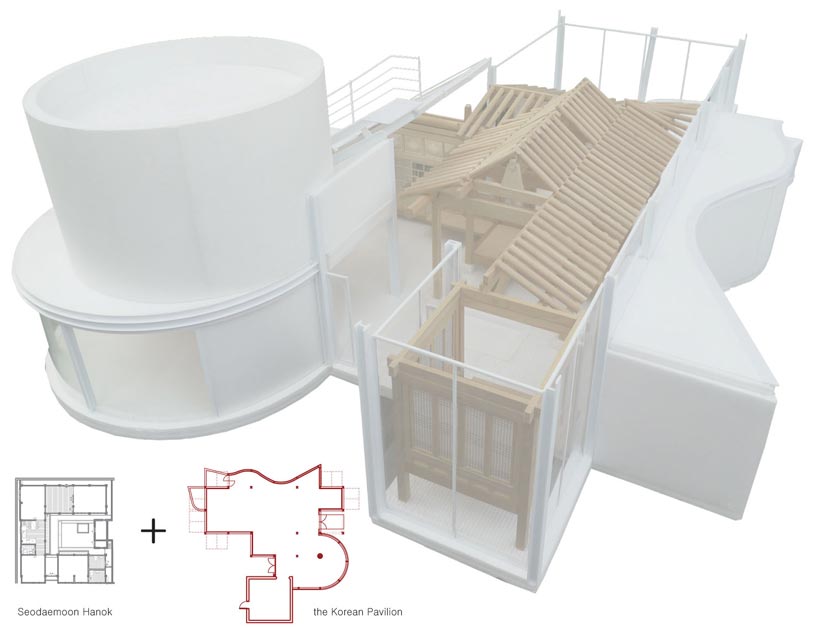 model of the korean pavilion 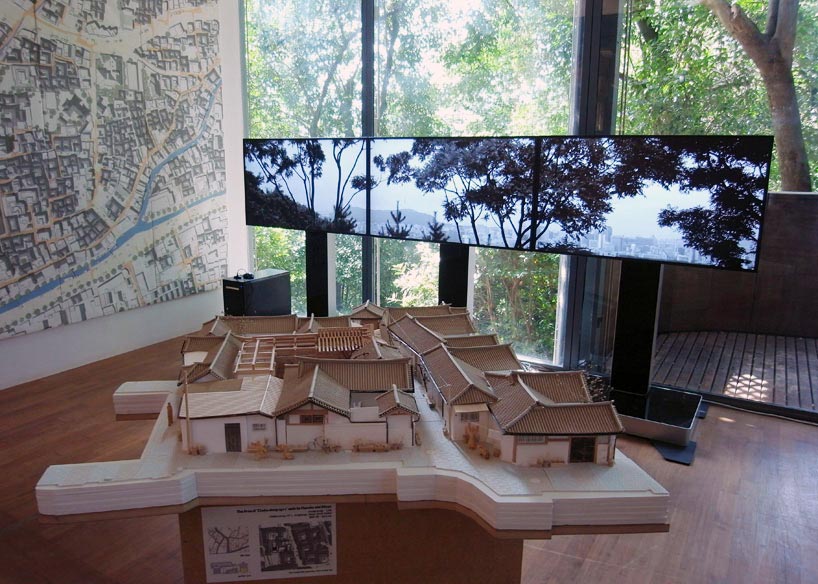 ‘living forms’ by cho, jung goo is a long-time research based on urban field investigations. through a vast number of models and drawings, the project aims to focus on the long history of change which is marked out in the appearance of diverse agents living between the urban environment and architecture. the exhibited model shows the alleys, dwellings, and various layers of phenomena which have accumulated through the past until today, providing a clear identity of the city of seoul. 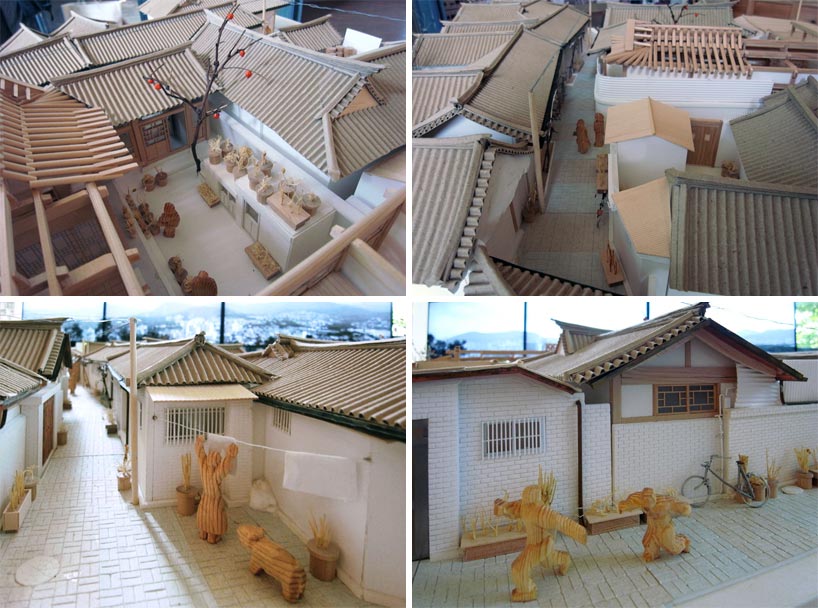 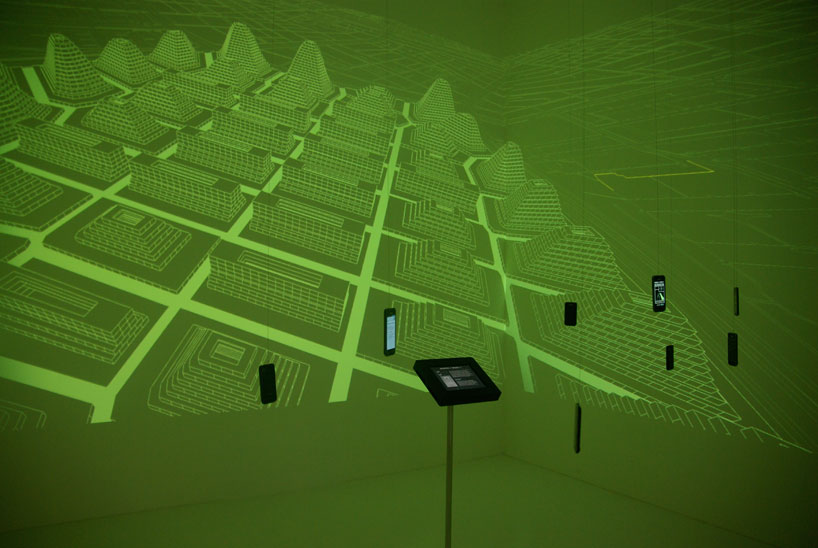 in a separate adjacent space off the main exhibition hall is ‘differential life integral city’ by hah, tesoc. lit in a dim green light, the room features a number of smart phones hanging from the ceiling and a series of projection on the walls. focuing on the people and their ability to become agents in the transformation of a city, the project calls on the participation of visitors to become a member of a homogeneous city. as people input their information into the downloadable app using the provided smart phone, a real time generating process will be shown on the wall, making visible how the city changes to suit each individual’s lifestyle. 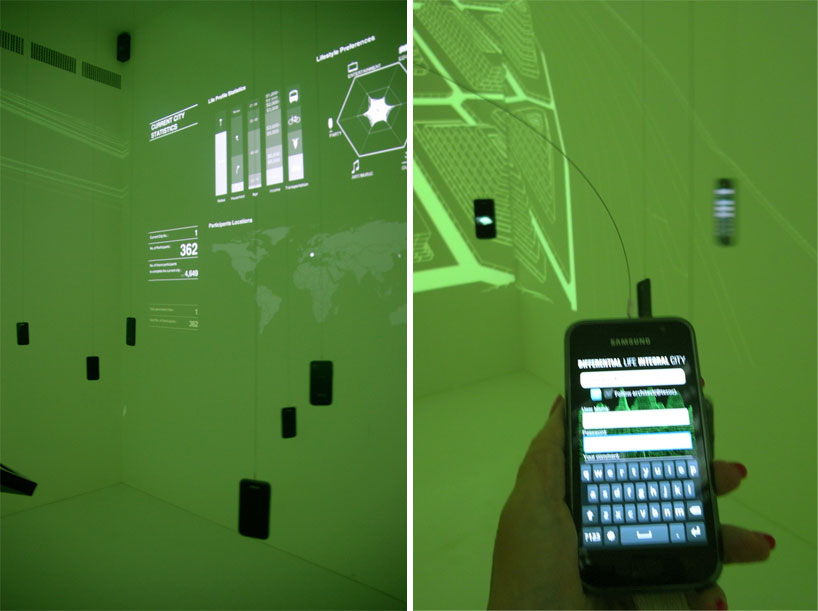 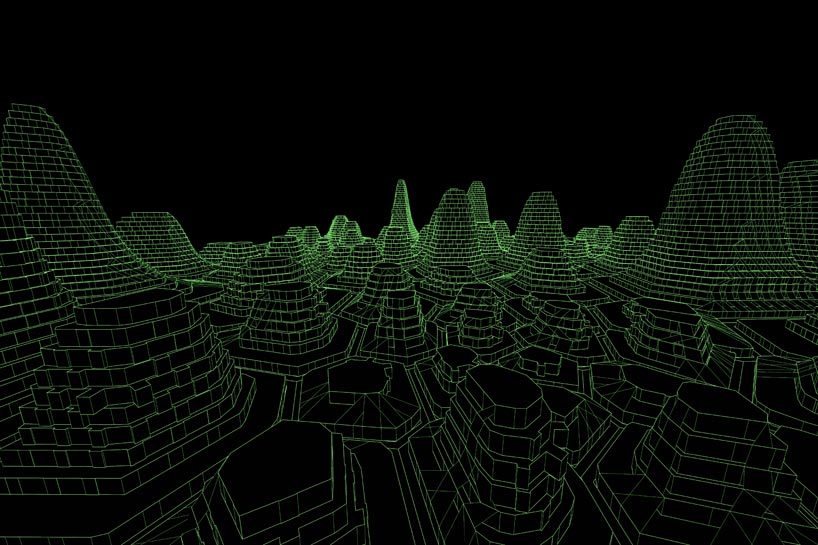 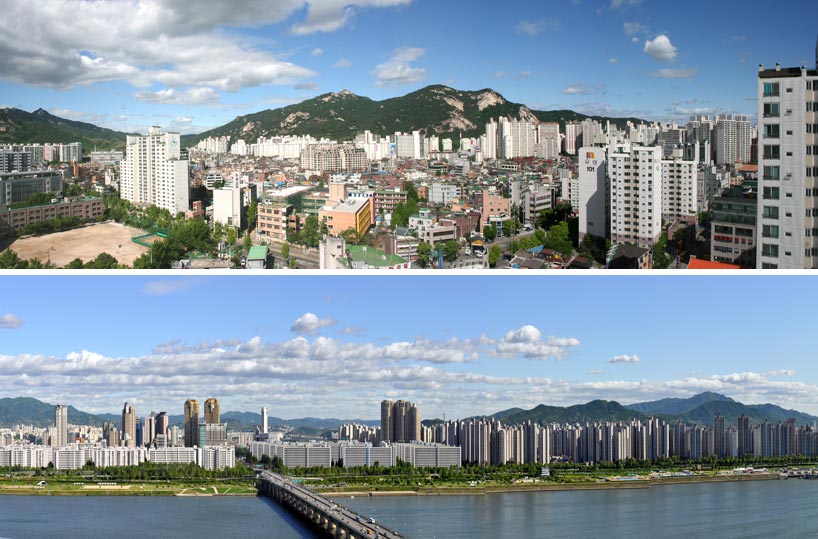 ‘apartment city, seoul’ takes a look at the current urban fabric of seoul, which is heavily dominated by lines of apartment buildings. mountains, which are the traditional landscape of seoul, are being conquered by these high-rise dwellings, ultimately substituting out traditional life style with the urban. the project traces both the positive and negative aspect of the apartment city. 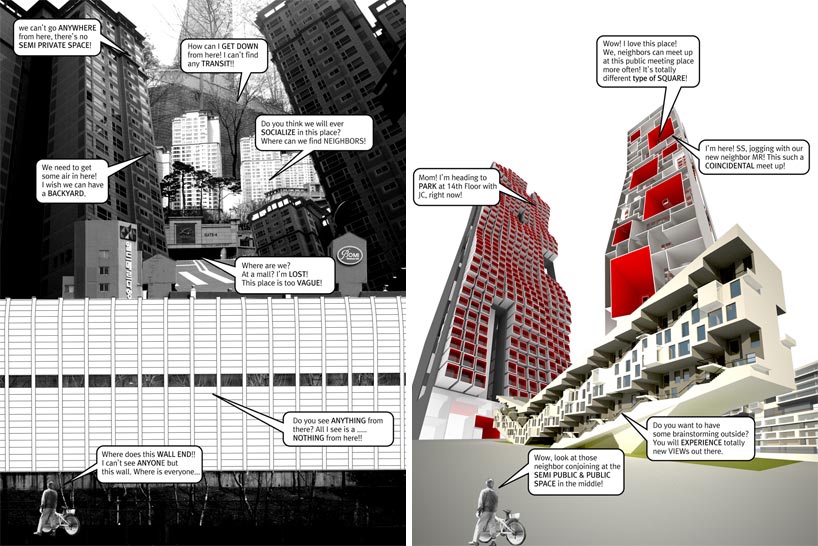 recognizing the need for a new process and approach when it comes to replacing the urbanized’barricaded city’, ‘replacing public scape’ by shin, seung soo is a proposal that develops liminal space beyond spatial boundaries to maximize on individual interface. by creating urban public space as an extension of the people’s activities, public-ness becomes ‘interplace’ where the users’ experiences are augmented and integrated across various scapes. 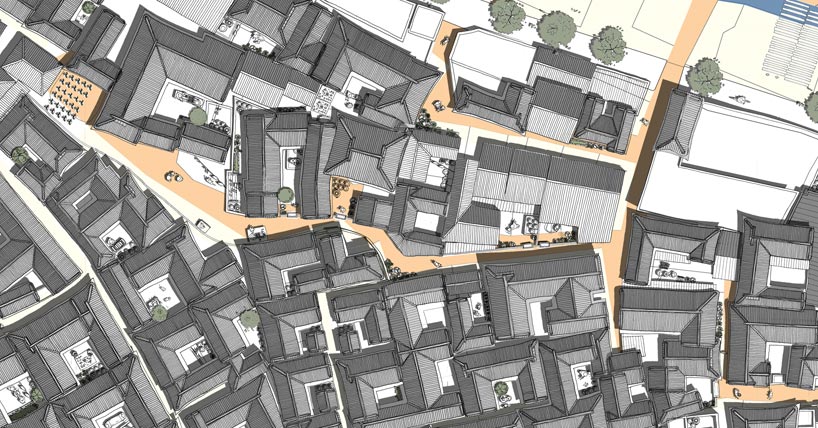 ‘living city’ by lee, sang koo takes a closer look in to ‘golmok-gil’, or alleyways of seoul and their idiosyncratic forms. inconsistent in width and size, ‘golmok-gil’ have become a physical marker of the city’s gradual stages of development. unlike instant construction of modern city streets, the alleyway grows with one piece at a time to fit the needs of the people. by studying the characteristics of ‘golmok-gil’, the life patterns of seoul’s inhabitants can be traced out and defined as a ‘living form’ that affects and determines and composes the urban structure. 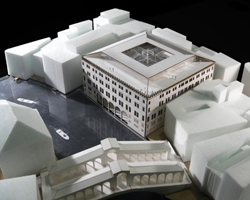 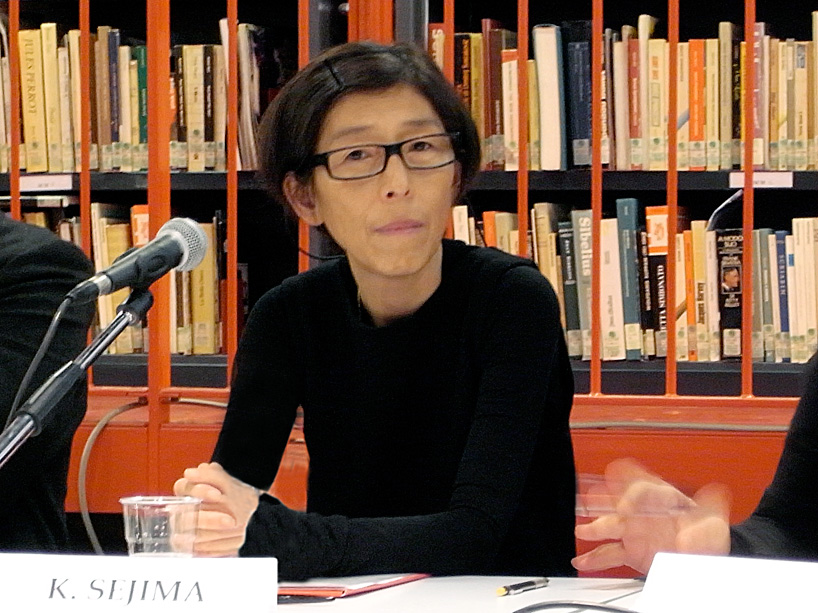 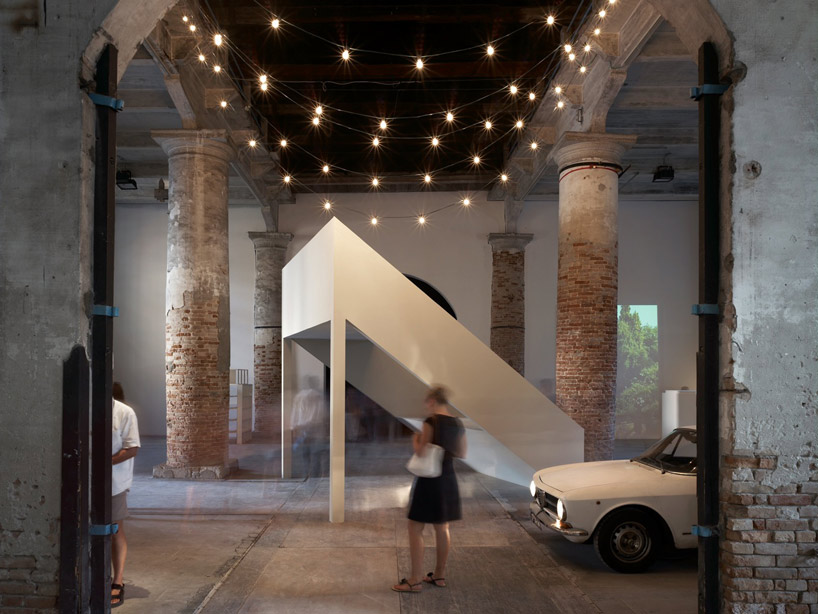 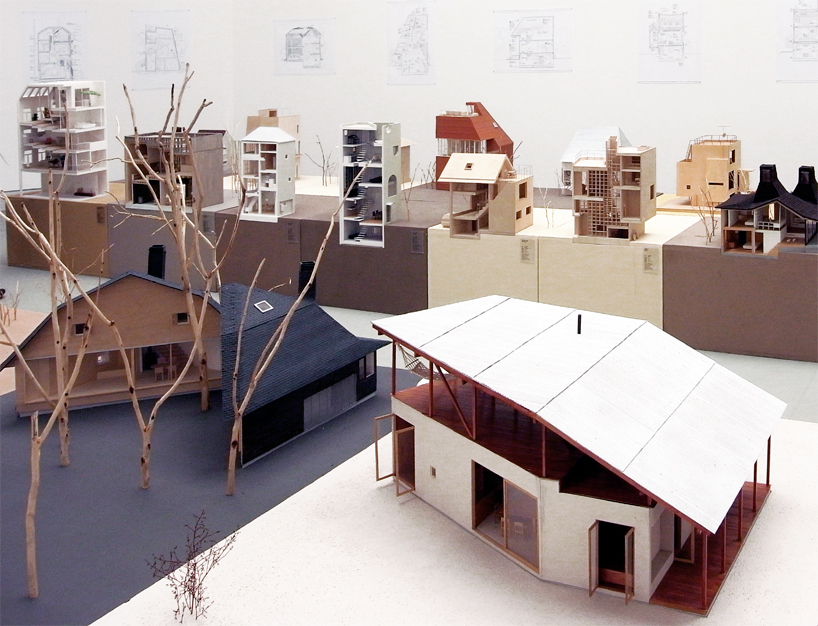 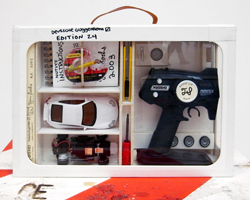 designed to span three sites that each rise above the alpine lake, the retreat celebrates unique and varied spirit of its context.

designed to span three sites that each rise above the alpine lake, the retreat celebrates unique and varied spirit of its context.

the design reminisces about architect louis kahn’s aesthetics, especially the material sensation of terrazzo that was prevalent in saigon in the 1950s and 60s.

the design reminisces about architect louis kahn’s aesthetics, especially the material sensation of terrazzo that was prevalent in saigon in the 1950s and 60s.

blurring the line between sculpture and architecture, the structures are the work of dutch artist dre wapenaar.

blurring the line between sculpture and architecture, the structures are the work of dutch artist dre wapenaar.

appearing in the middle of the entrance hall, the interesting cube clads a hidden staircase leading to the rest of the shop.

appearing in the middle of the entrance hall, the interesting cube clads a hidden staircase leading to the rest of the shop.

×
keep up with our daily and weekly stories
508,029 subscribers

keep up with our daily and weekly stories
508,029 recipients