in july 2011, one year before the opening of the 2012 games, the main venues and infrastructure for the london summer olympics were constructed and completed within budget. the goal in building up an appropriate stage for the world’s greatest sporting and cultural event was that the architecture conceived needed to look beyond 2012 and at the legacy it would leave on the british capital. permanent venues have been developed where a need for long-term use was deemed necessary, and where there was not, temporary ones have been built around the city, making use of and transforming existing london landmarks such as wimbledon, lord’s cricket ground, horse guard parade and greenwich park.

take a look at designboom’s article ‘london 2012 olympics: the look of the games‘ which offers a visual overview of how the visual identity of the summer olympics has been implemented. 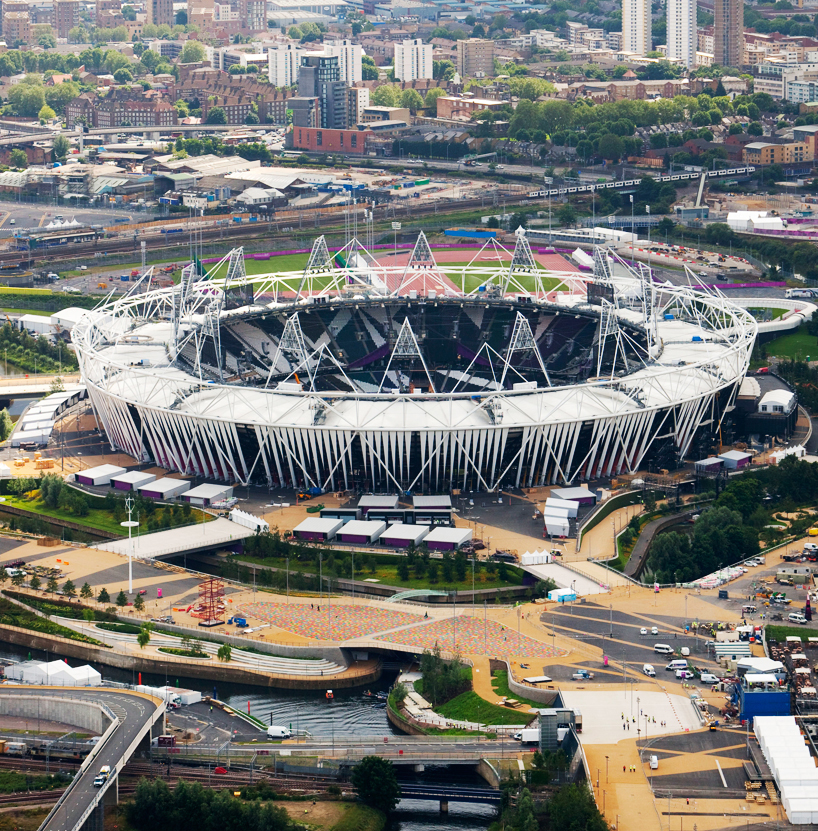 international practice populous has been a key player behind the architectural development of the london 2012 olympics, responsible for having created 35 competition and more than 100 non-competition venues. their biggest feat has been the design of the ‘olympic stadium’, the site of the opening and closing ceremonies along with the athletic track and field events. situated on a diamond-shaped island between two existing waterways, the seating bowl will accommodate 80,000 spectators during the games, and will downsize to a 25,000 seat venue as a means of maintaining a sustainable structure beyond its main purpose.

see designboom’s full coverage of the ‘olympic stadium’ by populous. 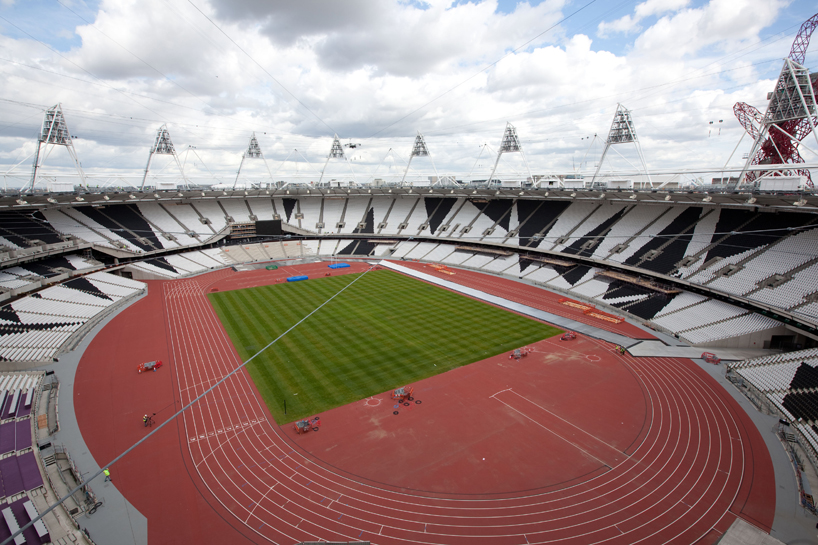 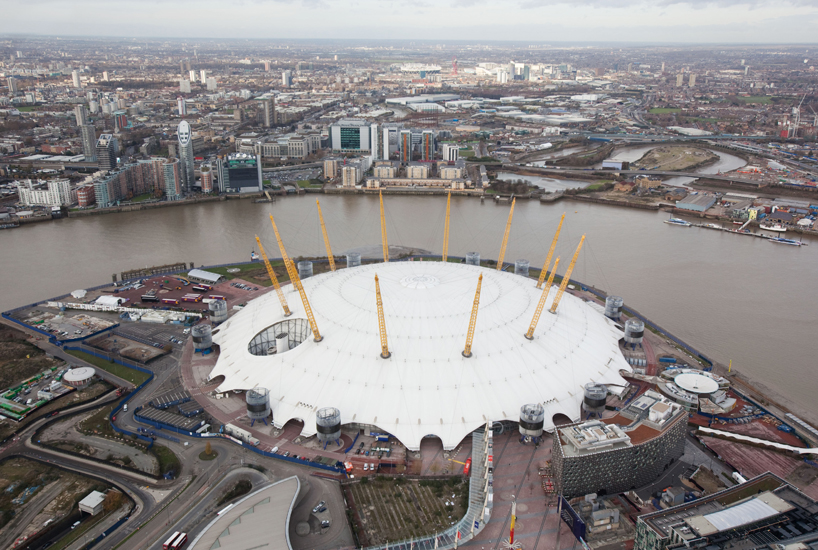 the ‘north greenwich arena’ is home to the artistic gymnastics, trampoline, basketball and wheelchair basketball events. not having been conceived specifically for the olympics, it was originally built for millennium celebrations back in 2000. the contemporary structure now known as ‘the O2’, has been redeveloped by populous to include 20,000 seats. the logistical challenges of placing a building the size of the arena within the dome required that the roof needed to sit snugly below the inner fabric, while still maintaining a minimum 4m separation for air and smoke reservoir provisions. 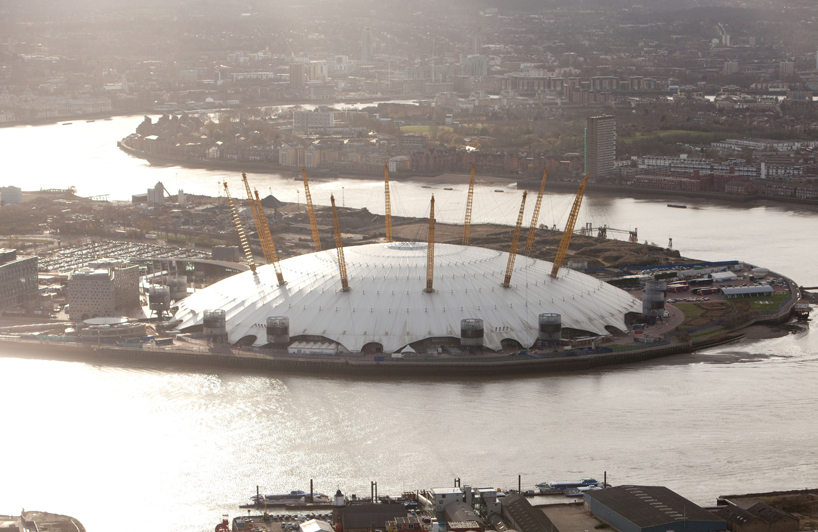 ‘horse guards parade’ is just one of the city’s landmarks which have been temporarily transformed to host various sporting competitions. here, in central london, beach volleyball events take place over the course of 11 days. populous has developed the three-sided seating bowl in such a way that it responds and respects its historic setting. with construction having been constrained by the queen’s diamond jubilee, horse guards parade venue was constructed six weeks before the opening of the games. 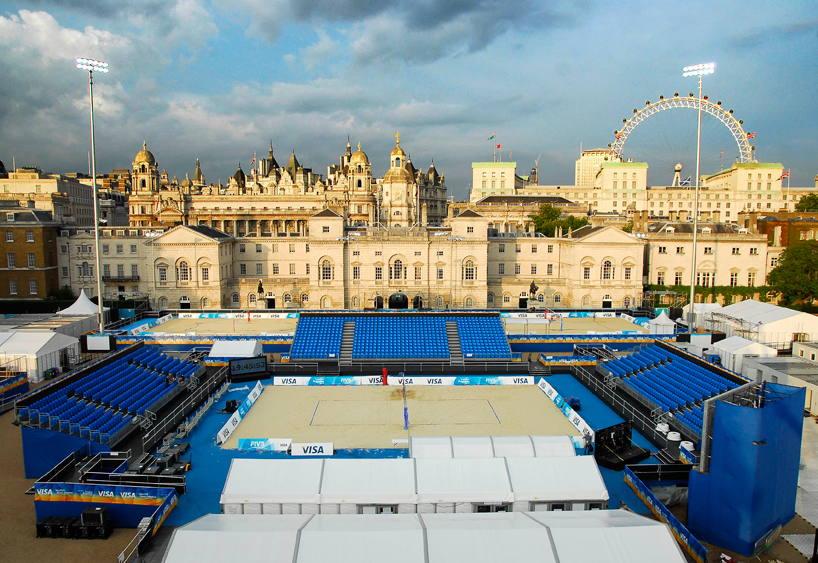 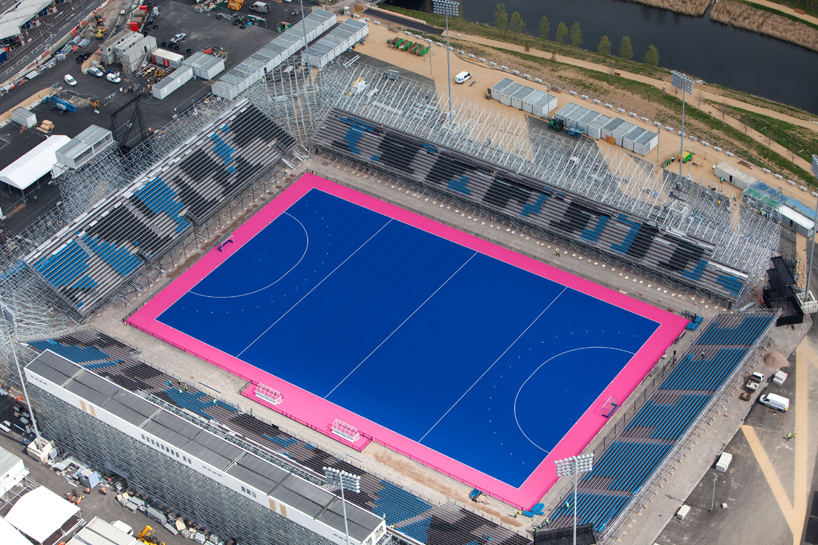 the ‘riverbank arena’ is one of the seven key venues located within the olympic park. host to hockey and paralympic football events, it will be active for the entire duration of the games, more so than any other venues within the complex. populous has rendered the playing field in blue, the first time this has been done in olympic history, with the surrounding runoff areas depicted in the official london 2012 pink to maintain a consistency with the games-wide ‘look’.

view from the grandstand image courtesy of populous 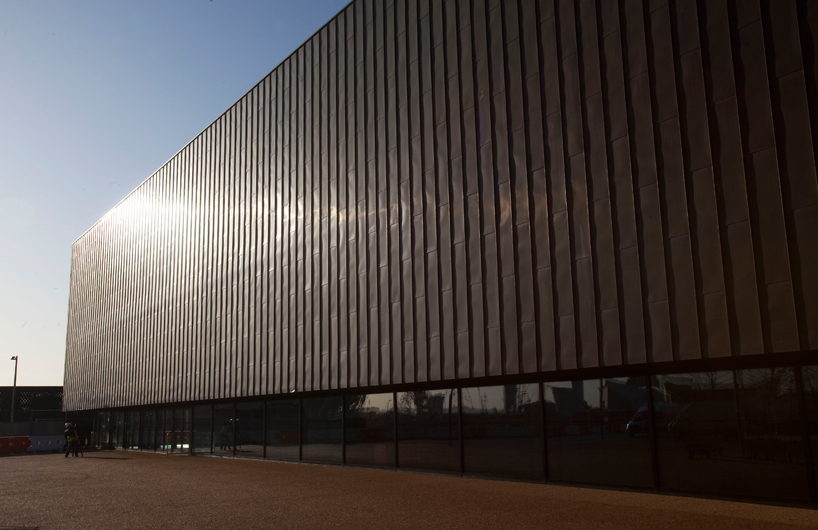 populous and MAKE are responsible for the ‘copper box’ which hosts handball, modern pentathlon and goalball competitions. it is one of only four permanent olympic park buildings and has been developed to be a useful asset to the community and integrity of the olympic park legacy after the games are over. during the olympics it will seat 6,000. a fully retractable lower tier integrated within the seating bowl allows the field of play to be transformed to hold exhibitions, shows and concert seating.

sited in northwest london within the westminster borough, ‘lord’s cricket ground’ is the home to archery events seating 6,500. during the olympics it will consist of a temporary overlay within the existing rounds that utilizes available infrastructure, minimizing cost and environmental impact. architects populous have selected the implemented materials, colours and cladding as a means of retaining the aesthetic of the olympics at these historic grounds. 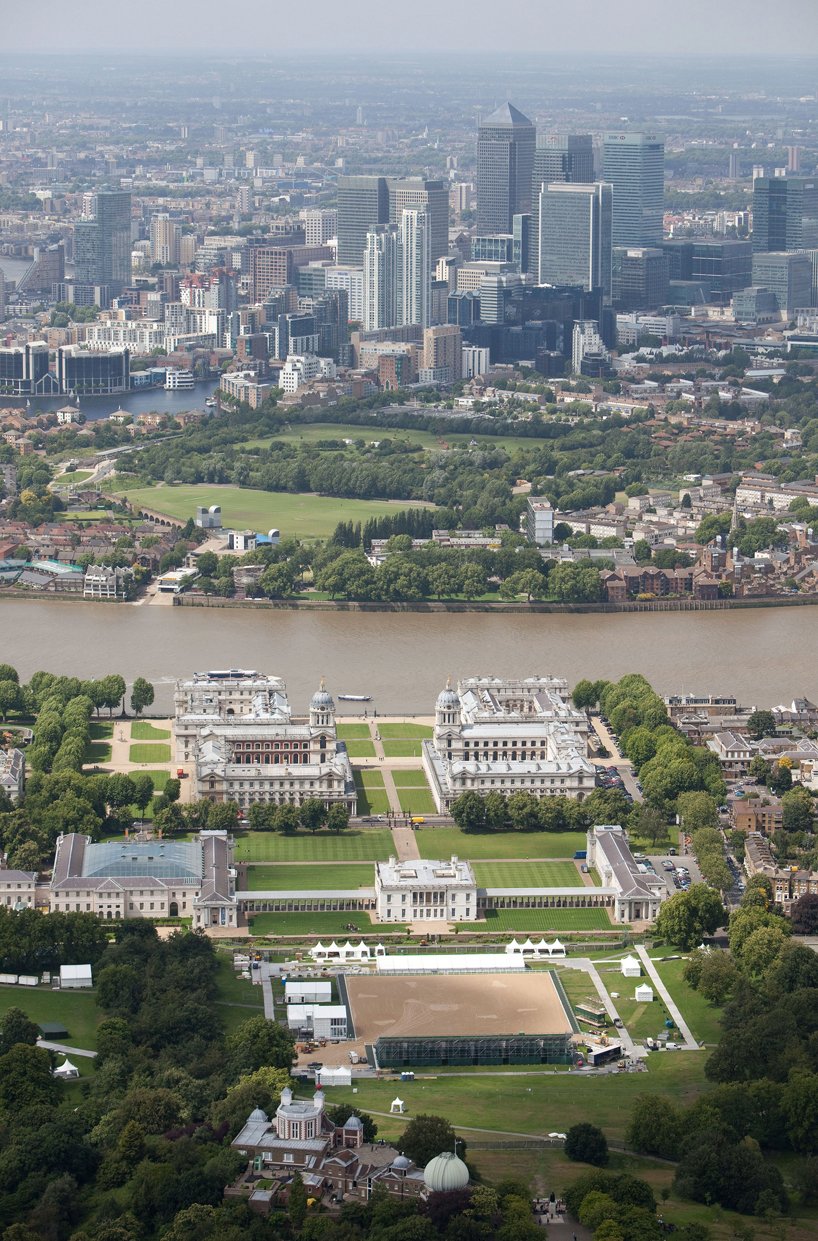 23,000 spectators are accommodated in the equestrian and modern pentathlon venue of ‘greenwich park’. the structure is temporary in nature and is located just south of the queen’s house, centered on the grand axis which runs through the park and buildings of the old royal naval college and national maritime museum. it has been designed by populous to sit comfortably within the architectural and landscape composition of its site and will be removed at the end of the games.

the existing ExCeL london, with a 10,000 maximum seating capacity, has been transformed by populous into five separate temporary arenas to moderate seven olympic and six paralypmic sports: table tennis, judo, wrestling, taekwondo, fencing, boxing, weightlifting, wheelchair fencing, boccia, sitting volleyball and power lifting. as the site has been adapted for the games, the architects worked closely with venue designers along with the branding and marketing teams to achieve a look and feel which expresses the 2012 olympics through the integration of graphic elements. 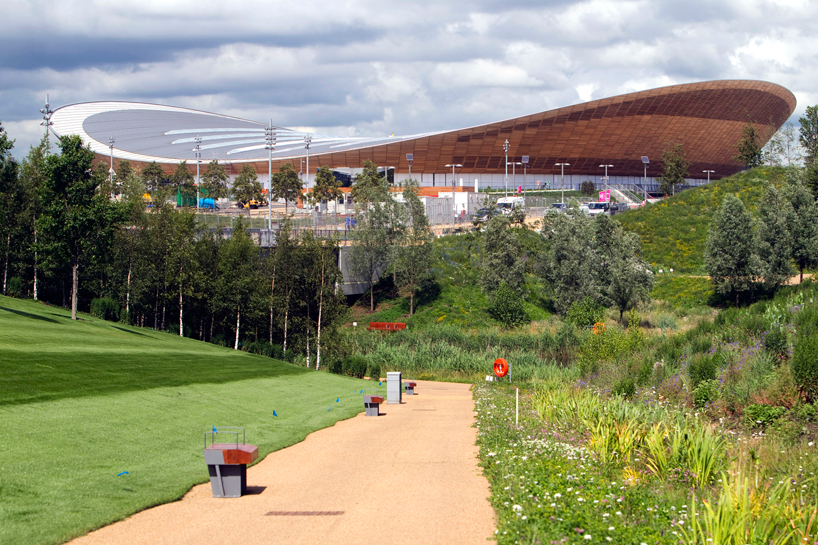 designed by london-based hopkins architects, the ‘velodrome’ is a 6,000 seat indoor facility which features a double-curve roof which has been implemented as a result of a study which focused on the performance and efficiency of the building. the 21,700 m2 space home to the indoor track cycling events, with outdoor BMX tracks situated nearby. one of the four permanent venues on olympic park the design draws its form from the bicycle itself, not as a mimicry of the two-wheeler per se, but rather a response to the functional requirements of the venue.

see designboom’s full coverage of the construction and completion of london 2012 olympic velodrome by hopkins architects. 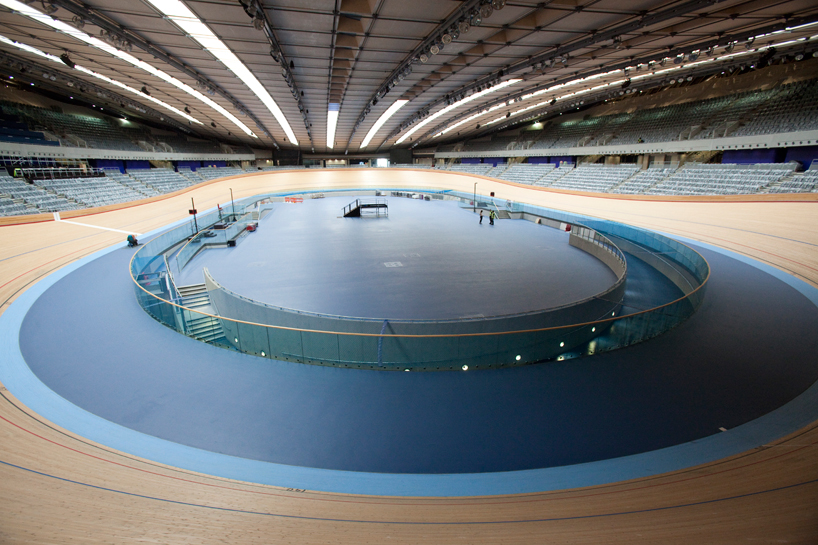 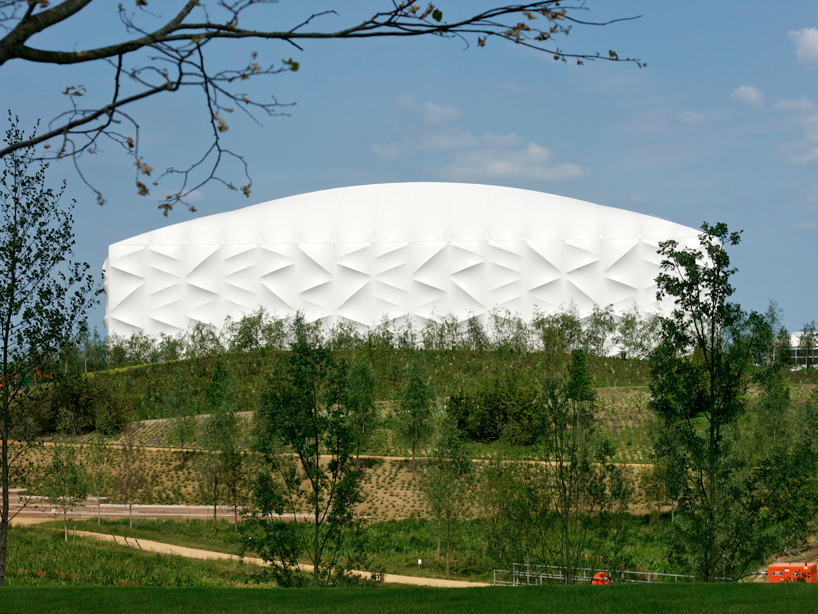 in the development of the basketball arena for the london 2012 olympics, the SKM/wilkinson eyre/KSS design team was faced with the challenge to create a temporary building which would be both simple to erect and sustainable in terms of its legacy once the games are over. because of its short-term nature, the structure has been conceived in such a way that two-thirds of the materials and elements used in its construction will be reused or recycled following the games. basketball, handball finals, wheelchair basketball and wheelchair rugby are taking place here. it also acts as a holding area for athletes during opening and closing ceremonies. 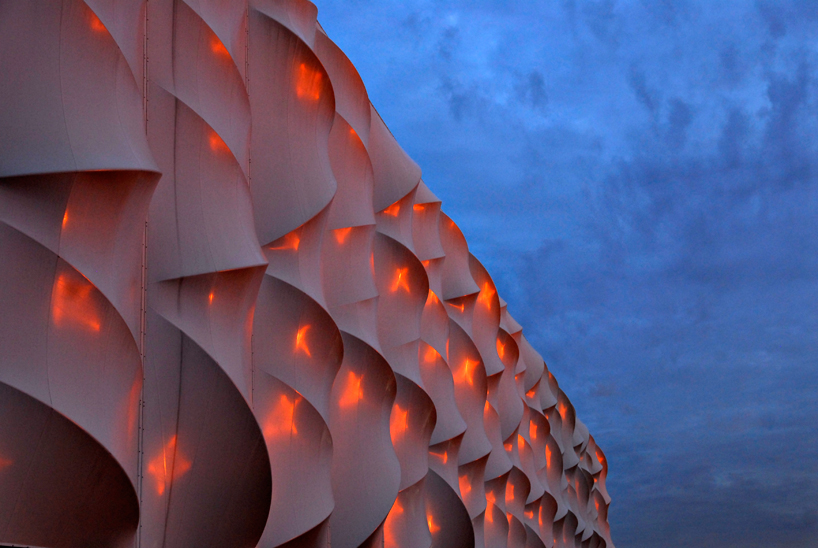 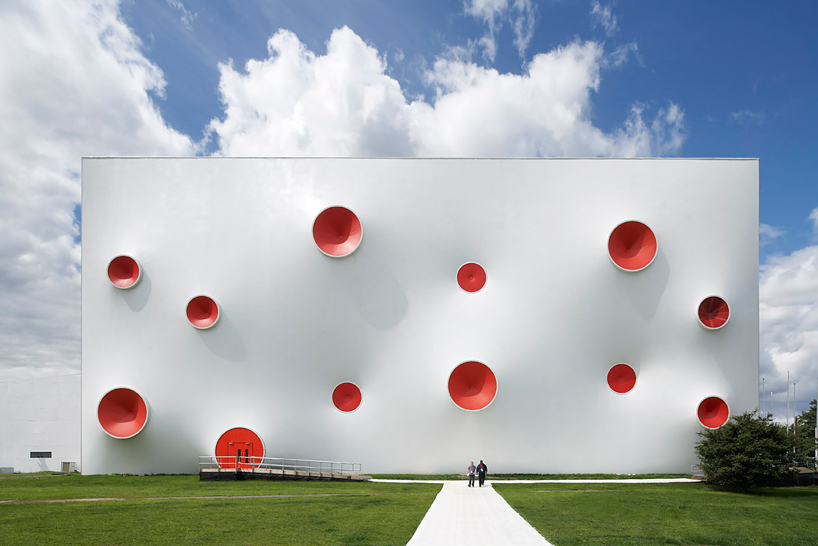 german firm magma architecture has conceived the ‘olympic shooting venue’ hosting the marksmen events for the 10, 25 and 50 meter ranges. the 18,000 m2 space is enveloped by a double-layer PVC membrane which has been stretched over the structure’s modular steel trusses. located in the woolwich district of london, the venue displays colorful circular protrusions which act as tension nodes, supporting the exterior wrap. 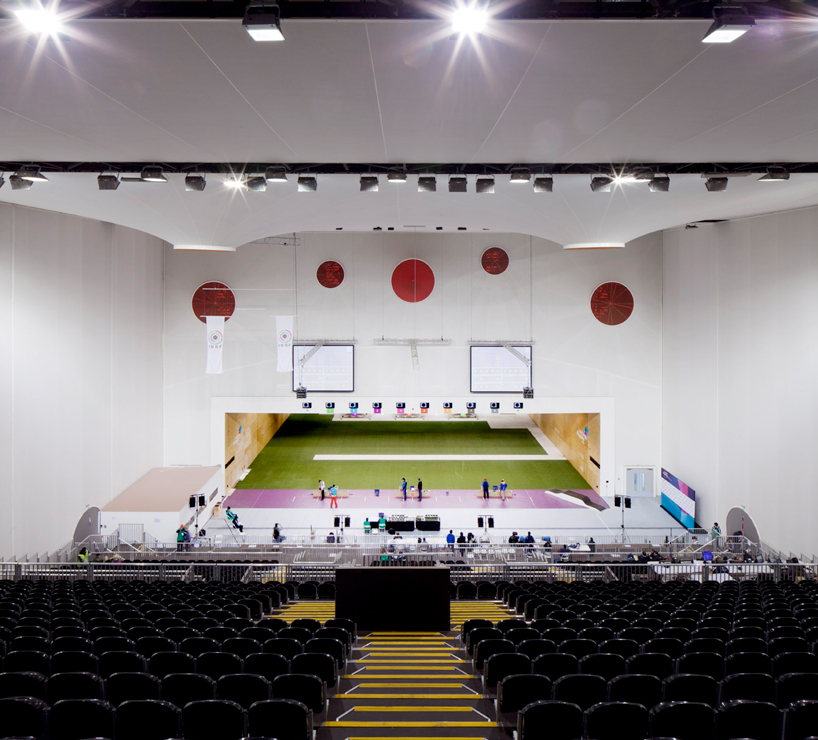 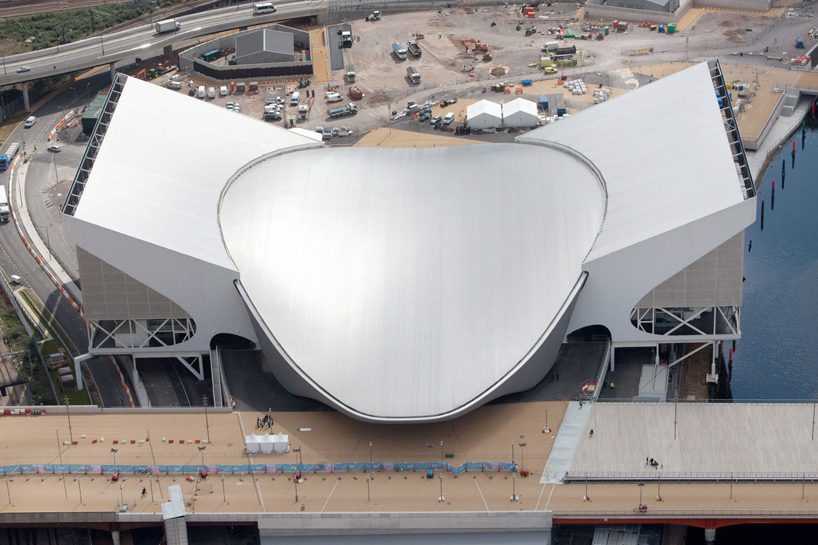 capable of holding 17,500 individuals at any given time, the ‘aquatics centre’ by zaha hadid architects is the venue for the swimming, diving, synchronized swimming and water polo events. the monumental structure features n aluminium clad steel roof which spans 160 meters in length and 90 meters at its widest point. the double curvature parabolic structure visually evokes the form of an undulating wave, reflecting the sporting events which it hosts.

see designboom’s full coverage of the construction and completion of the ‘london aquatic center’ by zaha hadid. 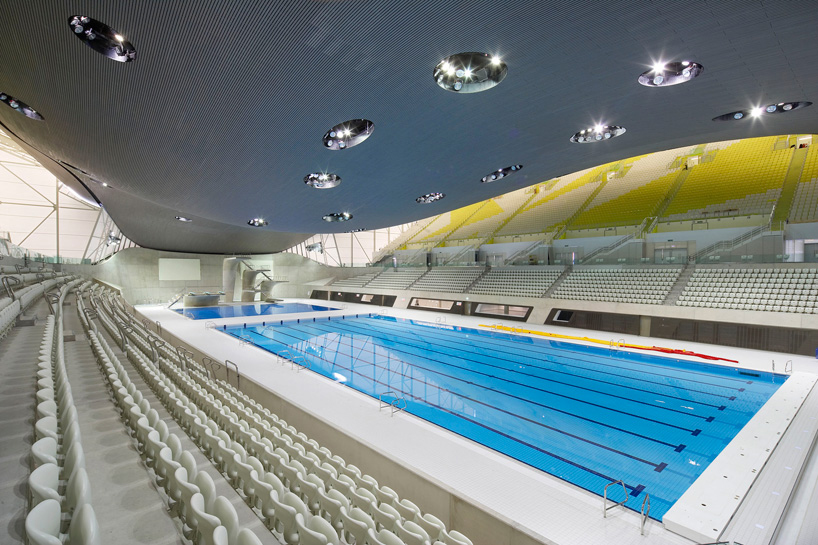 interior view of the diving and swimming venue image © hufton+crow 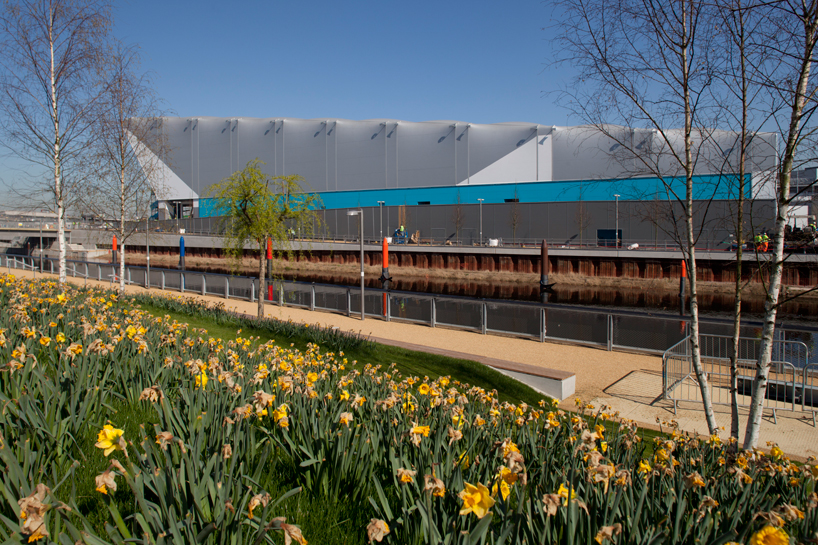 the 5,000 seat capacity ‘water polo arena’ by british firm david morely architects is a demountable venue which is made from a kit of parts which comes from and can be returned to the supply chain. it features a competition pool, warm-up pool and ancillary accommodation for spectators, athletes, press and VIPs. 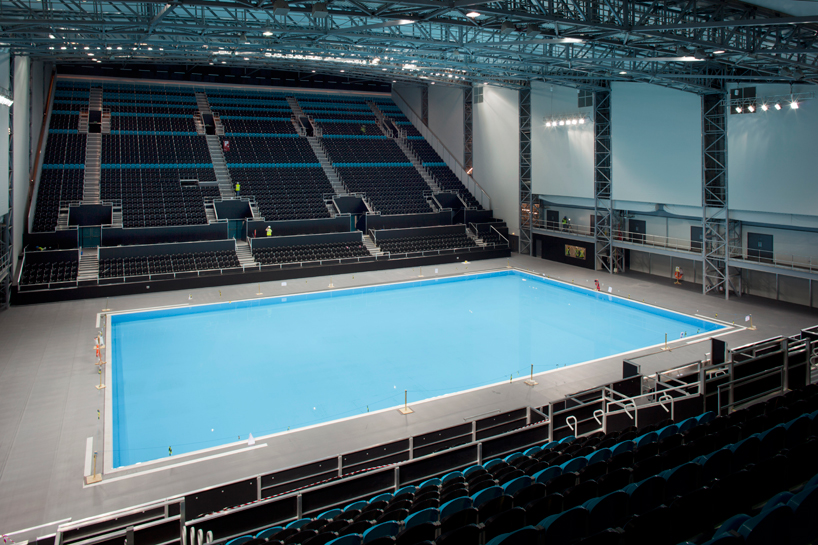 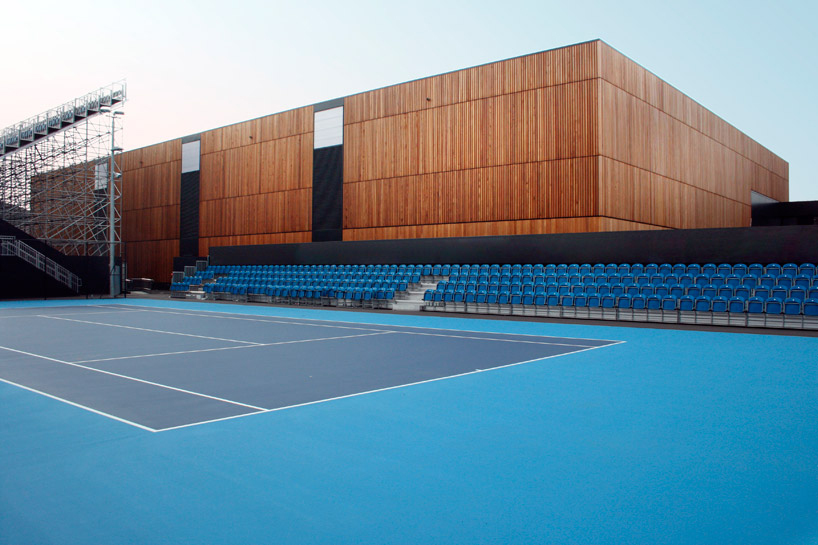 ‘eton manor’ is a training facility for the london 2012 olympics and includes temporary aquatic training and changing facilities. it also is a venue for the paralympic tennis events and includes nine competition tennis courts with temporary seating for 10,500 spectators. 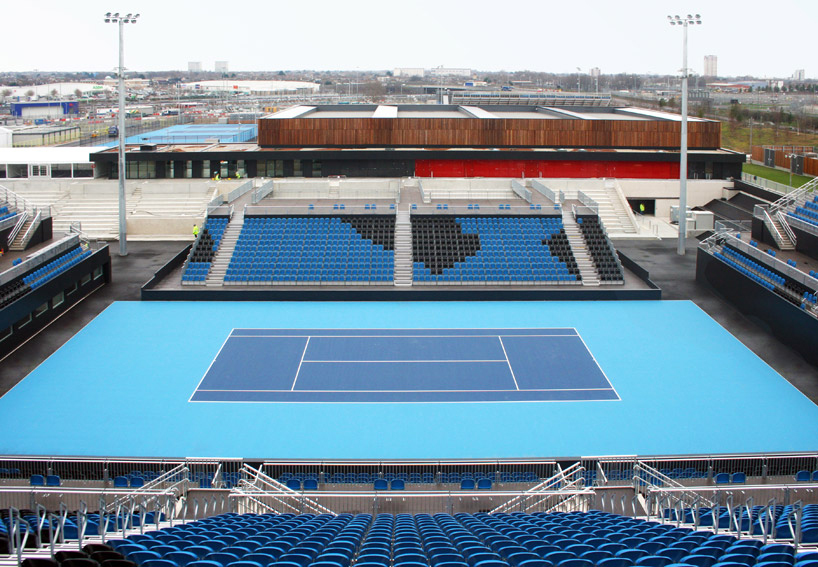 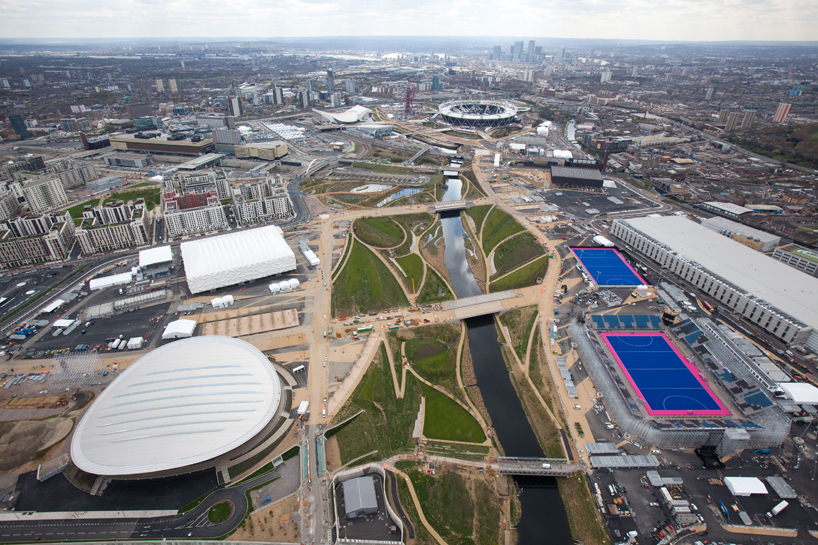