the LSE (london school of economics), has unveiled a shortlist of five proposals for the new global centre for social sciences. the competition organized by RIBA, has deliberately made the selected projects anonymous allowing the staff, students and governors, who will decide the outcome of the competition, to cast their vote purely on merit. the £90 million scheme involves the demolition and redevelopment of four existing buildings at the aldwych campus in london’s holborn district. 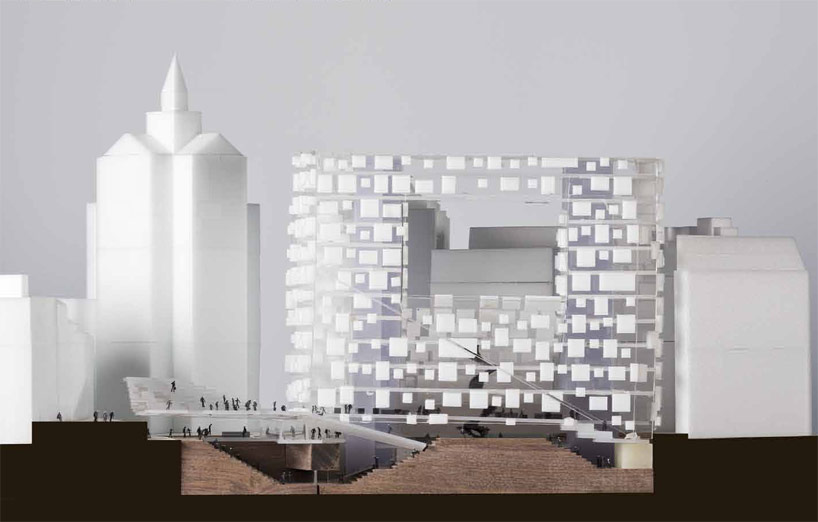 team b’s proposal reacts to the disparate and diverse styles of architecture within london, using the existing surroundings to produce the scheme’s shape. an authoritative volume has been created which attempts to transcend the pragmatic demands of the project. the plan does not occupy the full footprint of the site, creating a central public place where the campus is allowed to naturally converge. a square that sits above a 400 seat auditorium is punctuated with greenery, seating and skylights providing a view of the space below. the open and transparent design also promises intimate teaching and learning accommodation. 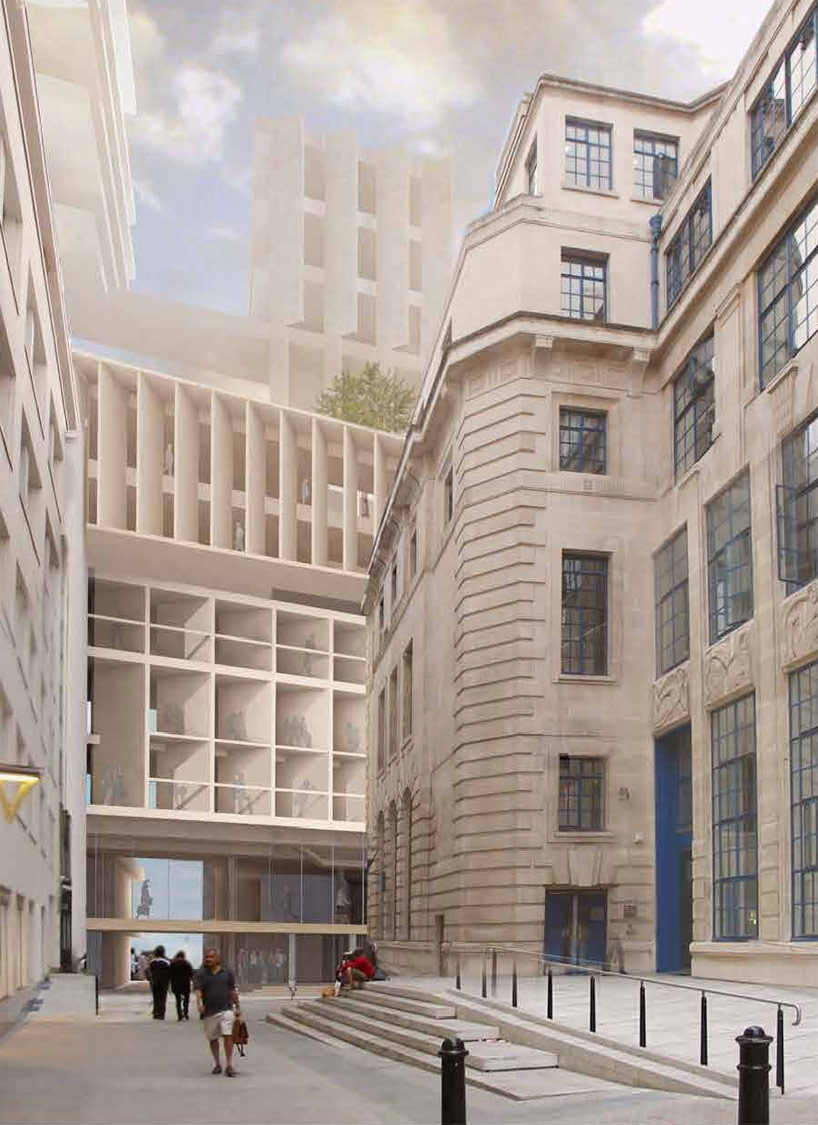 the design team were influenced by london’s narrow medieval streets which starkly contrast the more open areas of the city, such as the neighboring lincoln’s inn fields. consequently the scheme explores these themes throughout. glazing is used extensively at lower levels to ensure that the collective life and activities of the school interact within its broader urban context. with external stone walls, the building has a sense of weight and mass but the changing rhythm of windows mean that an element of playfulness is also incorporated. 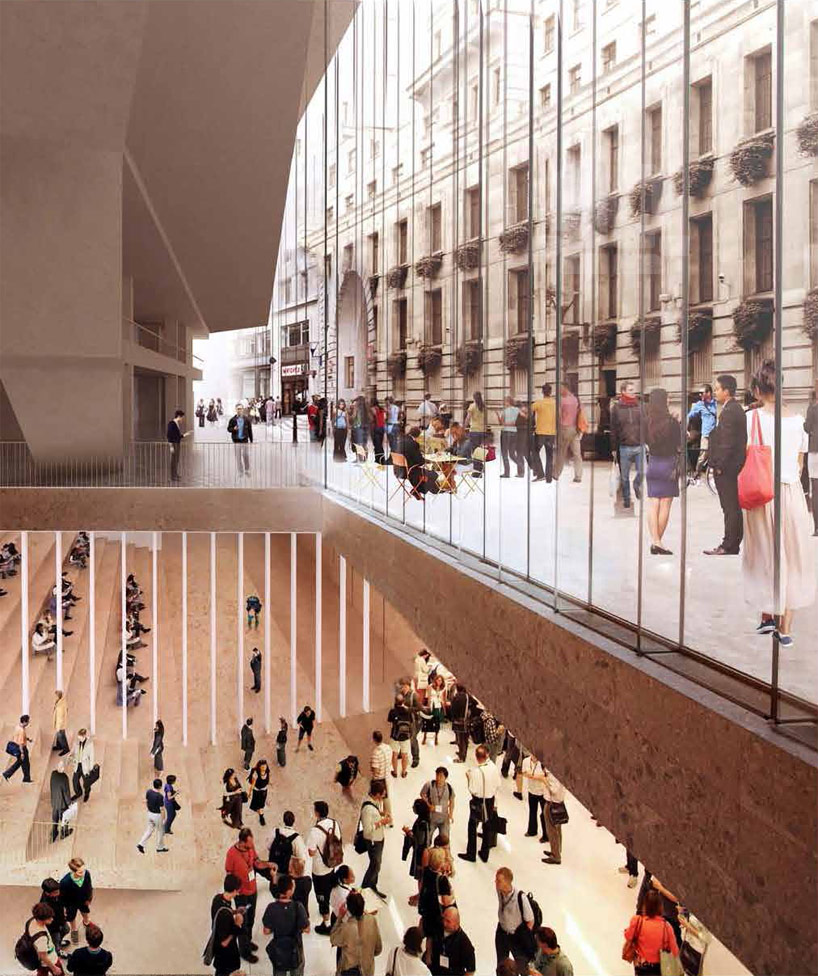 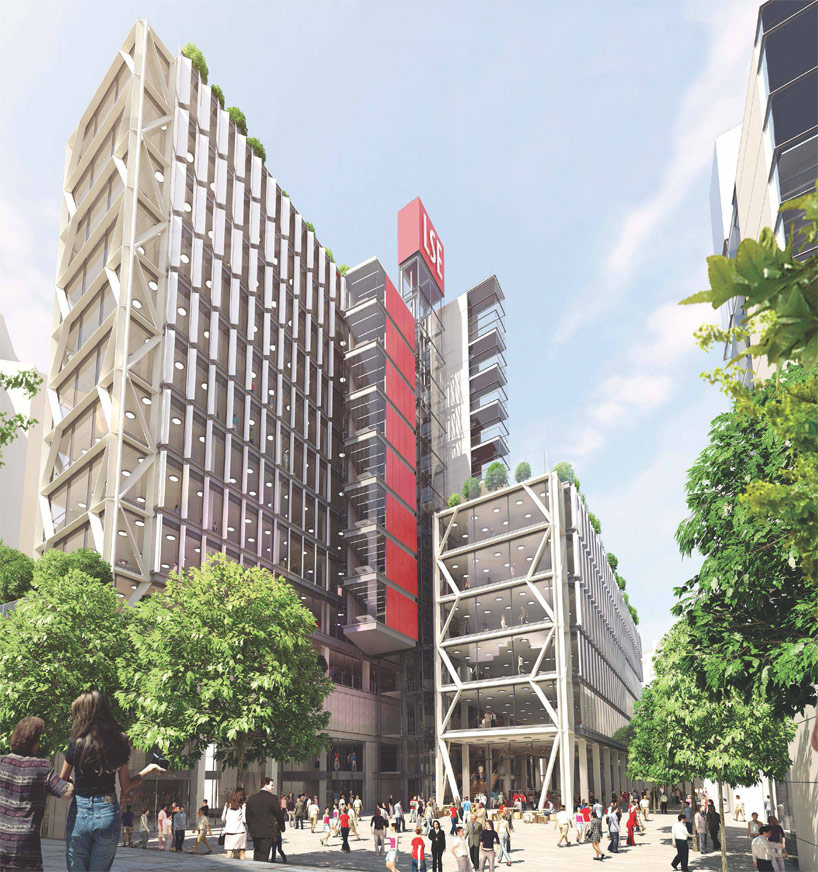 campus buildings are situated around the newly created plaza

proposing that a distinctive public square should form the center of the scheme, team e positioned the campus buildings around the plaza framing this newly created focal point. intended to encourage debate, discussion and collaboration between students and staff, exciting formal and informal spaces have been established. the project also places a large emphasis on environmental design using a system of passive ventilation to ensure that the university’s occupants are comfortable throughout the calendar year. 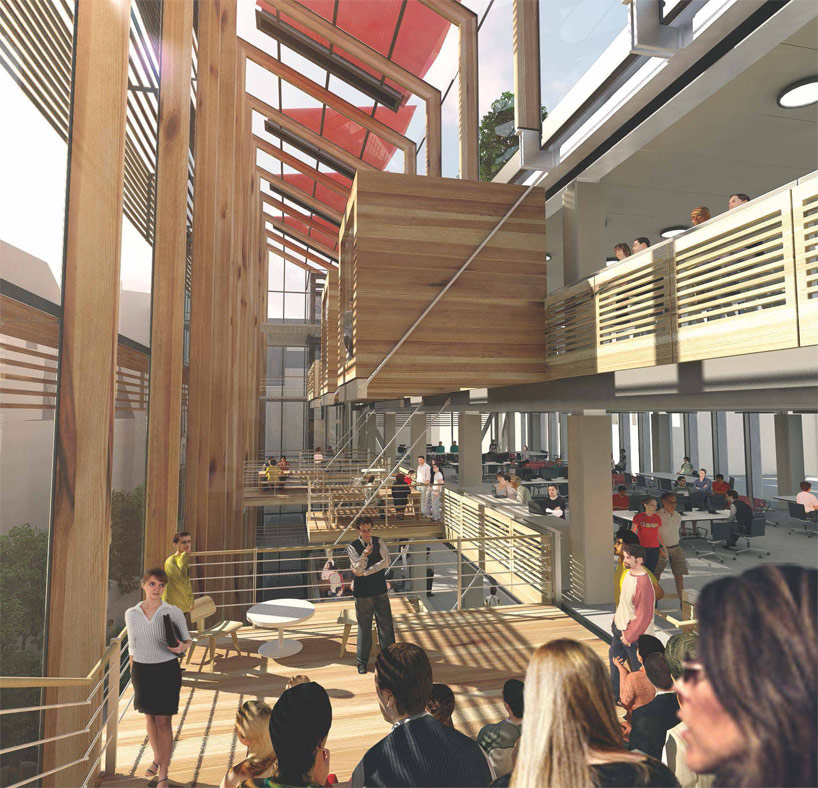 the proposal intends to encourage debate, discussion and collaboration between students and staff 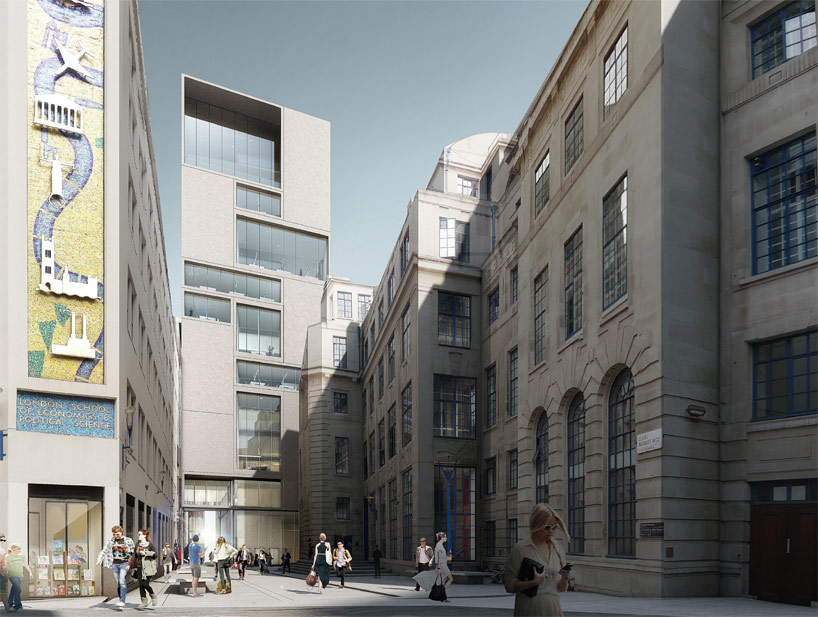 referring to their scheme as an ‘urban lighthouse’, team d have proposed a flexible structure which is able to provide for the educational institution’s occupants throughout the day. materials have been chosen sympathetically in order to provide a connection with the school’s neighboring buildings. programs are divided across seventeen levels, with academic areas located in the scheme’s tower, while lecture theaters are found at basement level. 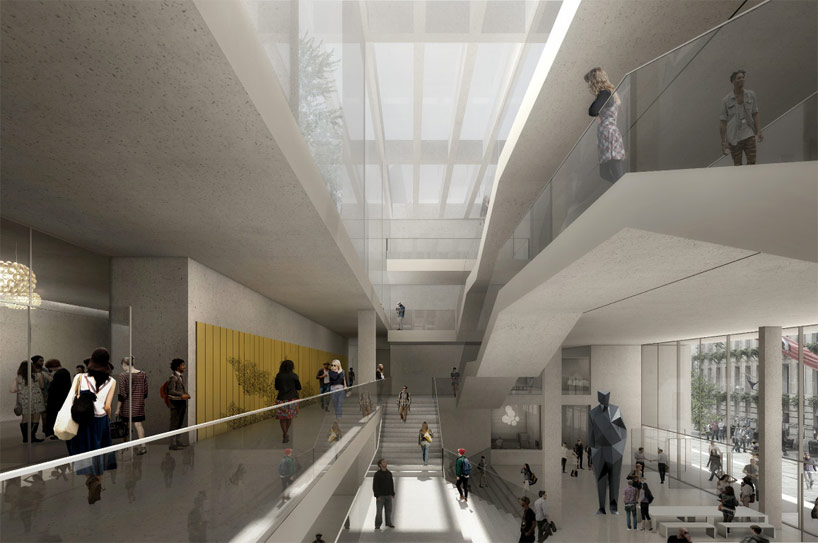 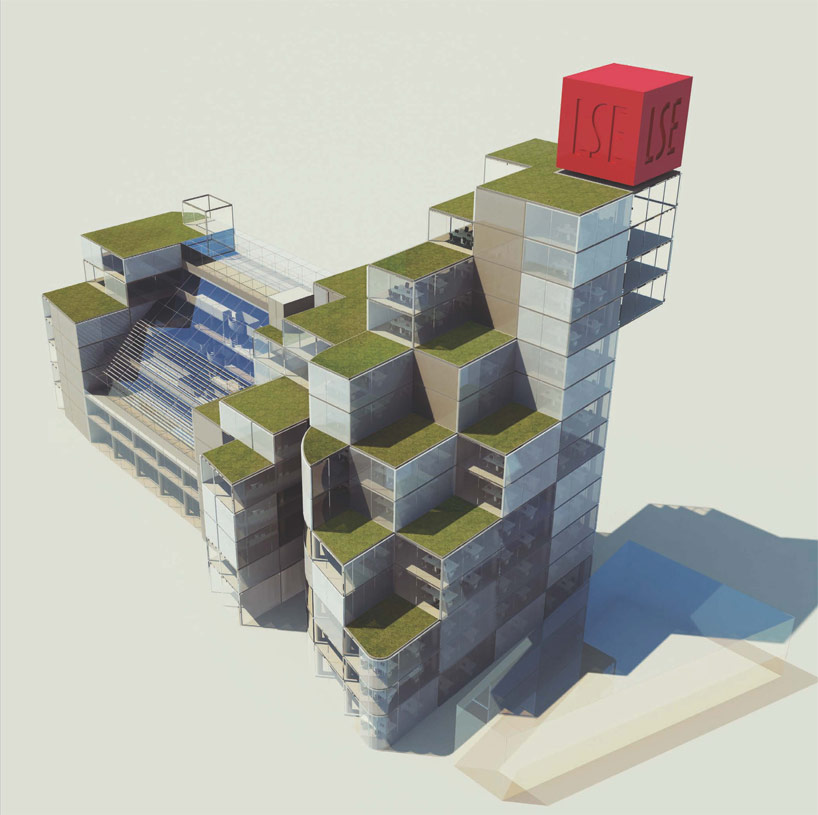 seeking to provide london with a new landmark, team a’s submission features a bright red cube at its highest point which can be seen from across the city. at the heart of the project a new spine is formed connecting the campus and its various programs. focusing on environmental sustainability, a number of systems, including several green roof terraces have been employed in order to meet the high standards required by the brief. 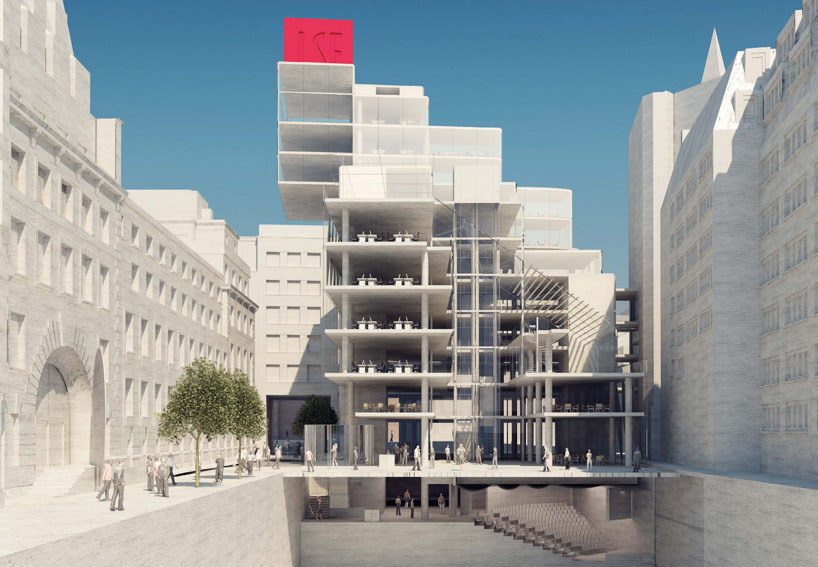 julian robinson, LSE’s director of estates said, ‘we believe we do design competitions well; mid-term design workshops with each of the teams helped to ensure they understood the brief and didn’t waste time and effort on tangential issues. the LSE does not have easy projects and always sets tough design challenges, as a result, the amount of analysis and intellectual effort that has gone into the designs is staggering. the teams have done a remarkable job in the time available’

‘this will be the school’s biggest ever building project and will transform the heart of our campus. given its scale it will be a landmark building and its legacy will endure for many generations of LSE students so it is vital that we make the right decision.’

Jan 14, 2021
junya ishigami completes plaza of kanagawa institute of technology in japan
remaining open to the elements, the project has been conceived as an expansive landscape that changes with the seasons and the weather.
architecture
984 shares
connections: +2570