morini arquitectos has added a distinctive concrete tower to a university campus in argentina, originally masterplanned by césar pelli in 1999. conceived as a visual landmark for the school, the tall structure is perforated with a variety of geometric apertures that openly display the building’s internal activity. located in the city of córdoba, the tower contains a series of workshops and laboratories, which employ unconventional teaching techniques and technologies. 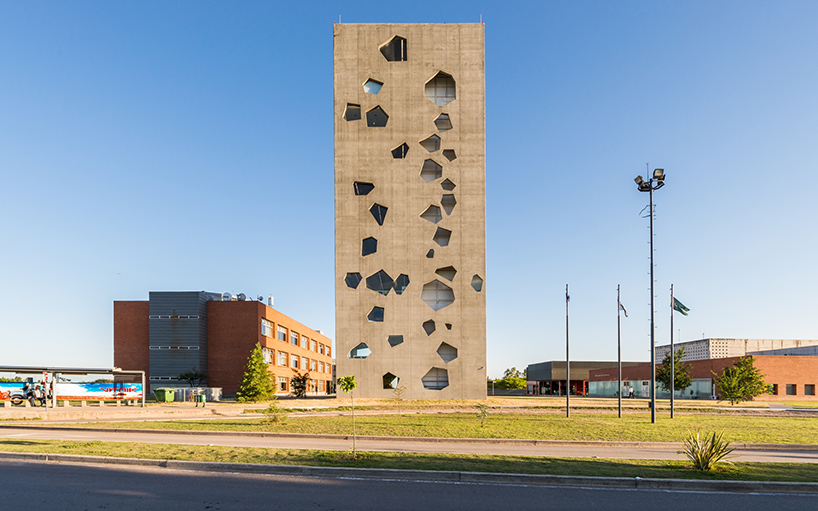 all images by gonzalo viramonte

consequently, the ‘experimenta 21 tower’ — photographed here by gonzalo viramonte — has been designed to express the school’s ‘unconventional’ and ‘disruptive’ character. existing in perpendicular contrast to the remainder of the campus, the concrete structure affords simple, yet flexible internal layouts articulated around a vertical void that rises through the building. this gesture also provides and ensures natural light and ventilation. 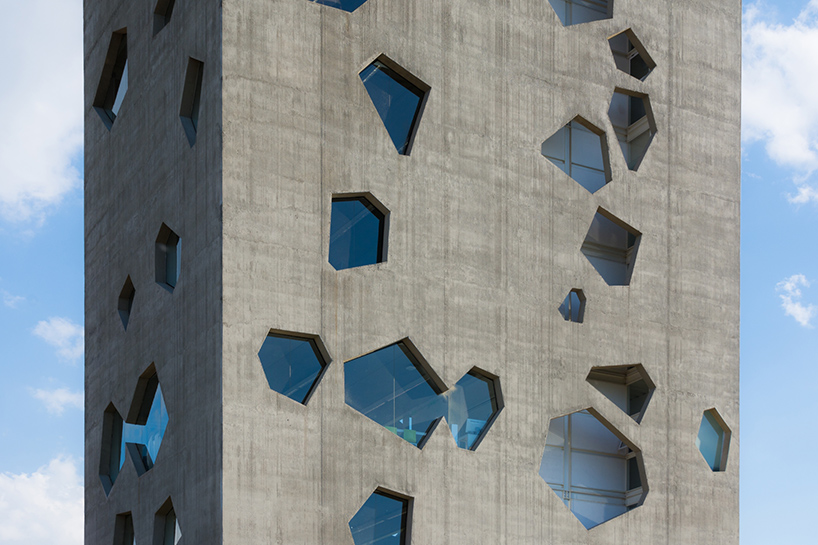 a variety of geometric apertures display the building’s internal activity

using sliding formwork, and 14 days of continuous concrete pouring, the building’s 41 meter-tall structural façade was completed in just two weeks. viewed from the workshops, the prefabricated and pre-stressed slabs were mounted on metal brackets fixed to the perimeter partitions. the rest of the building, including its interior store front, was realized through a metallic structure of rolled profiles, assembled on site with bolted joints. 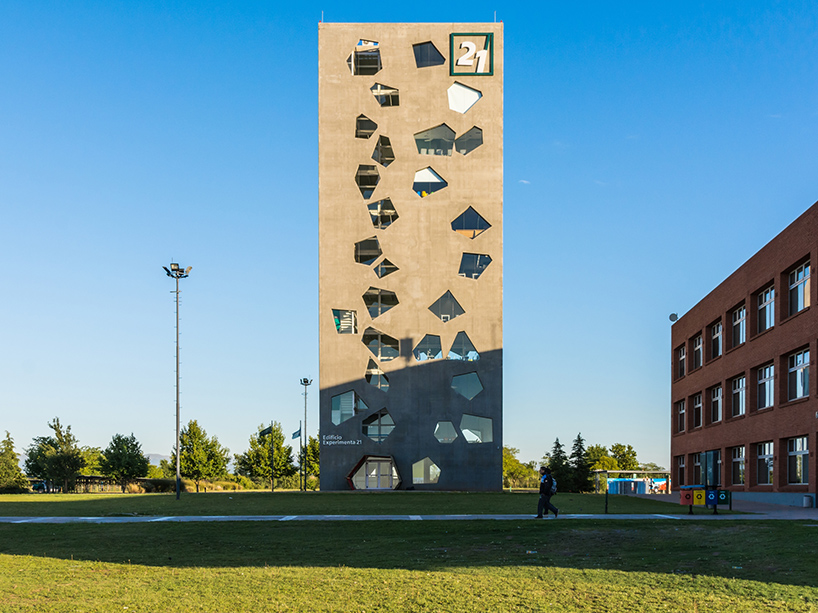 the tower has been conceived as a landmark for the school

in order to reduce the project’s carbon footprint, the architects sought to maximize natural light, while reducing thermal loss. all rainwater is stored in a rooftop cistern where it descends through the concrete walls of the courtyards before being collected. the water accumulates in a transparent tank — that doubles as the entrance hall’s roof — and is circulated back to the upper reservoir in a continuous cycle. 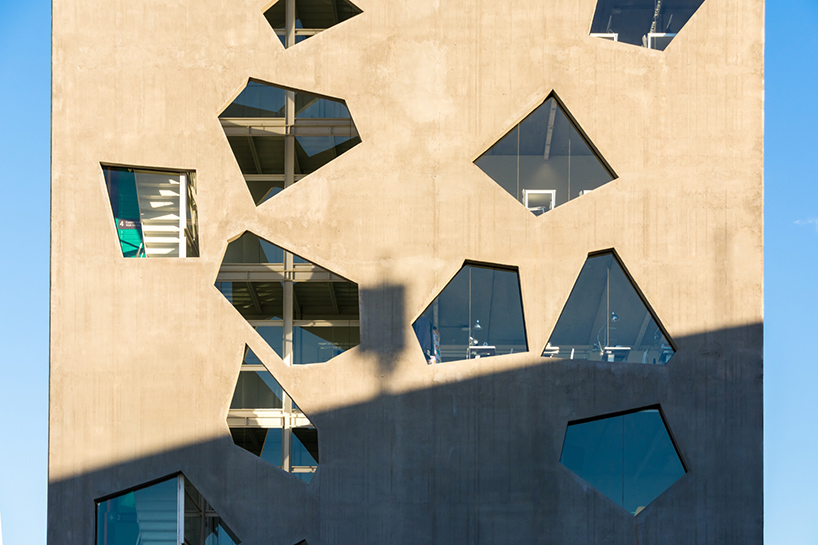 the structure contains a series of workshops and laboratories 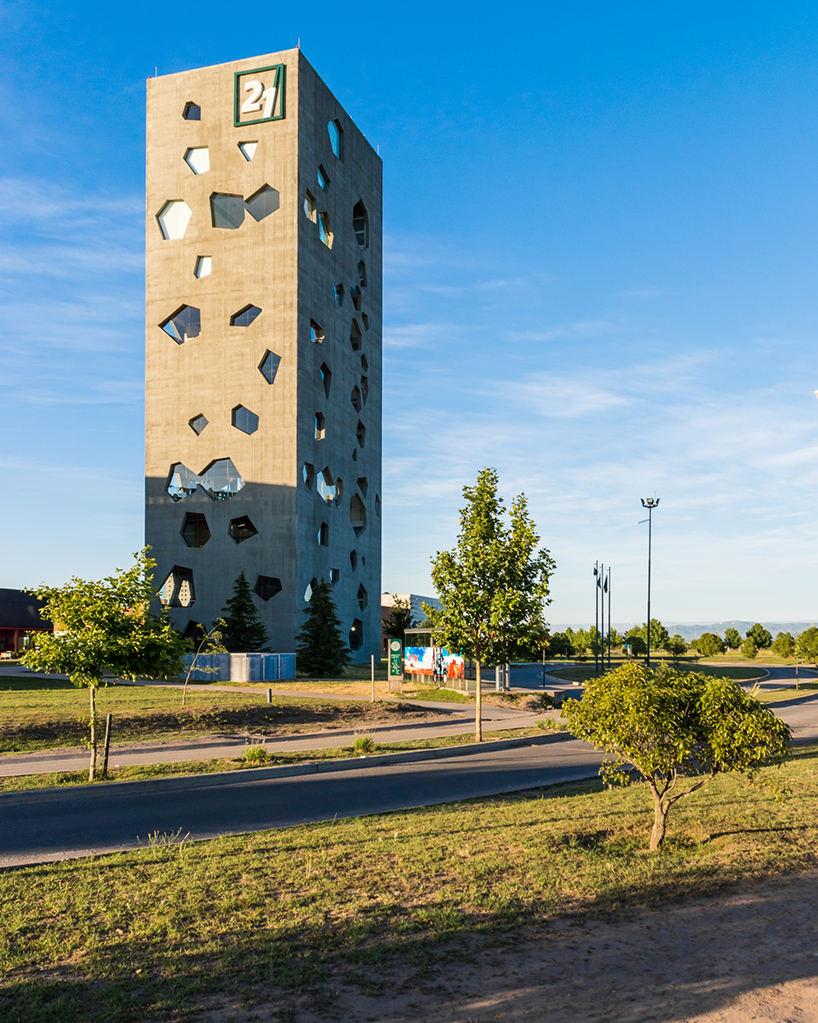 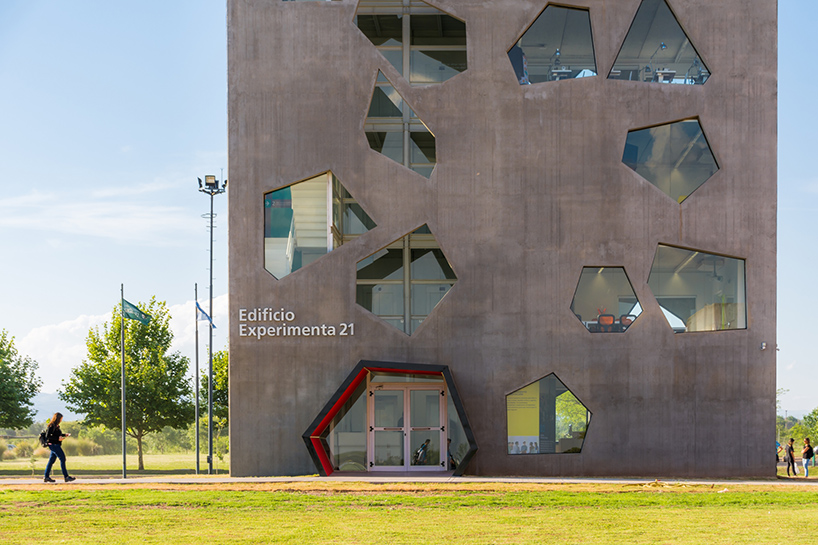 the university’s campus was masterplanned by architect césar pelli 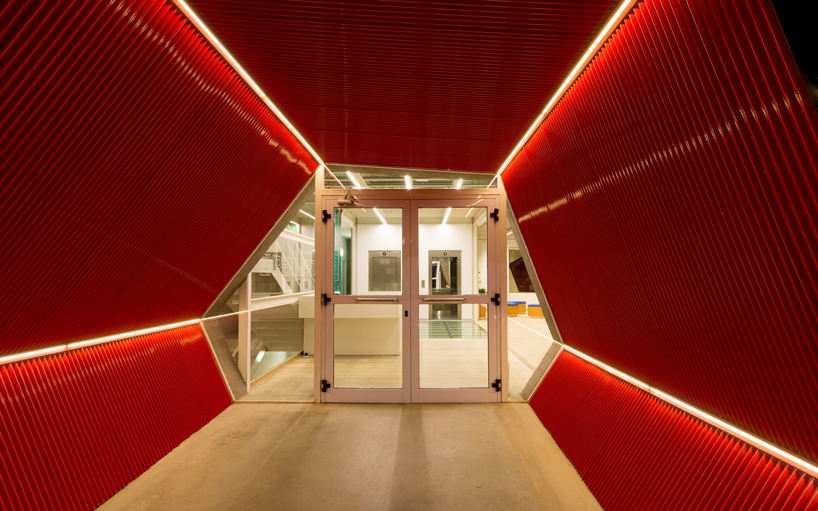 the tunnel-like entrance leading inside the building 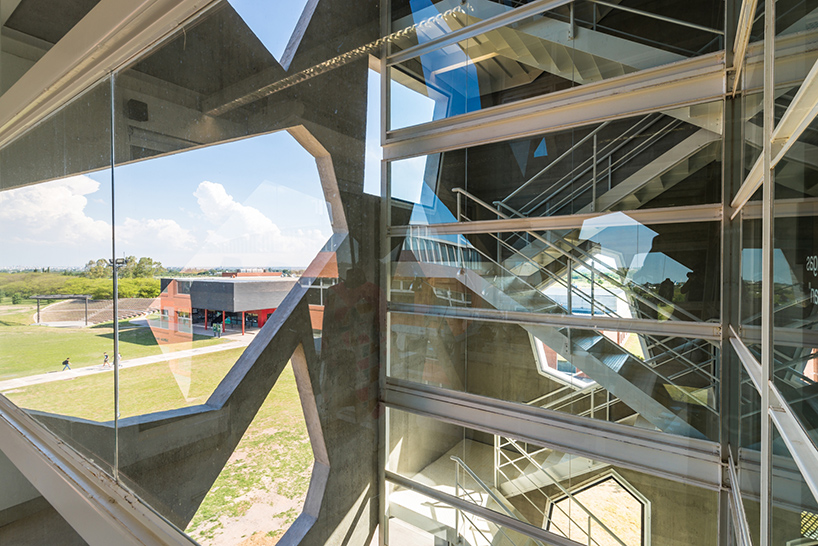 a vertical void rises through the building 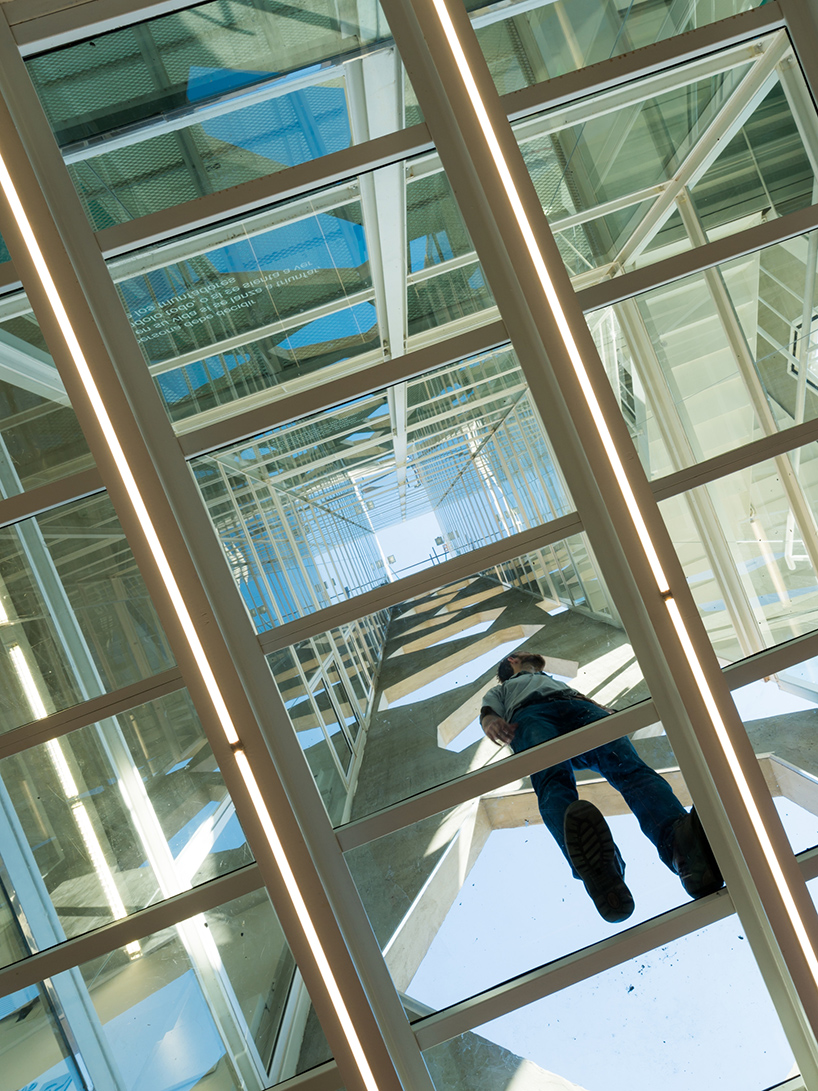 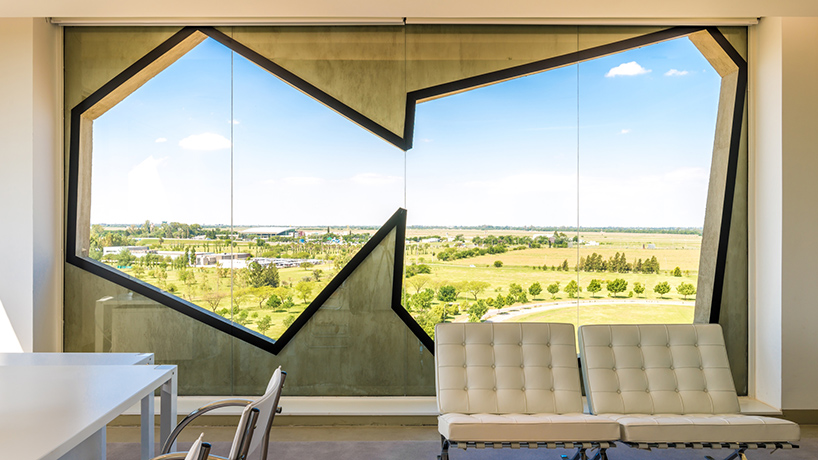 openings in the façade provide views out across the campus 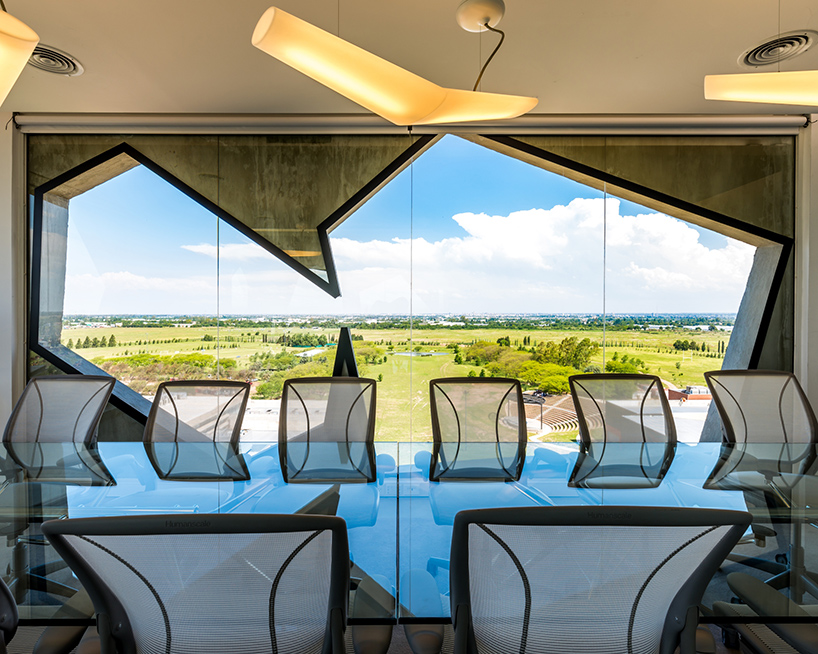 a meeting room at one of the tower’s upper levels 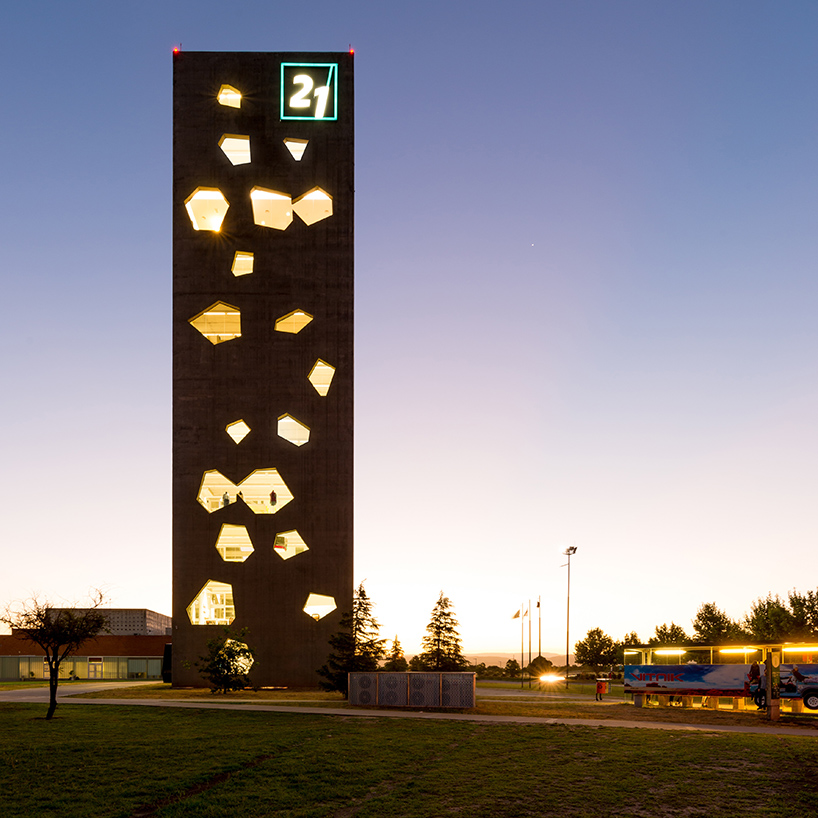 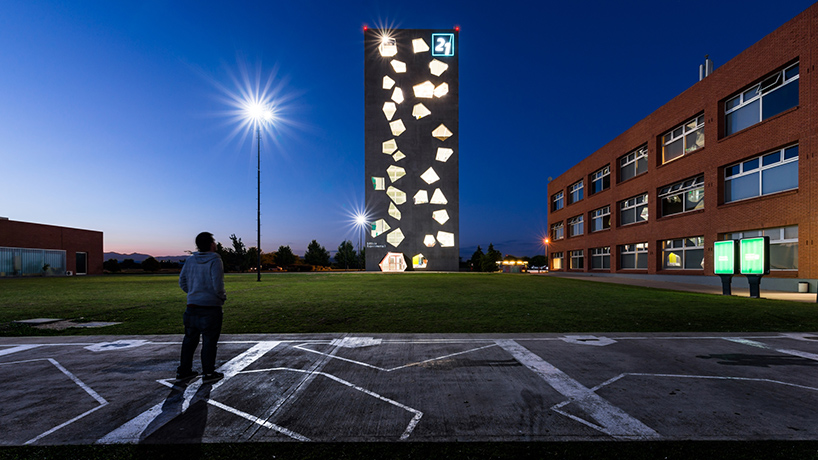 the university is located in the argentinean city of córdoba 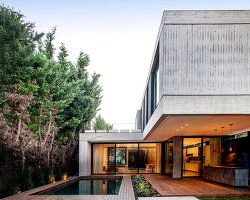 Nov 16, 2021
this house in buenos aires is a concrete box that floats above a garden lagoon 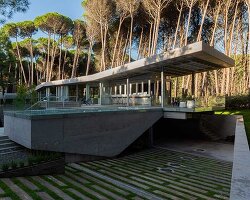 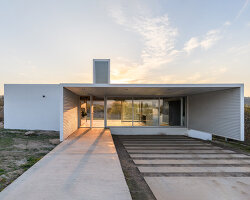 Oct 28, 2021
STC architects frames views across argentina with its house in la hornilla 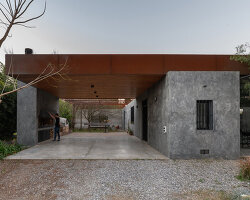 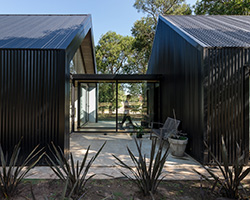 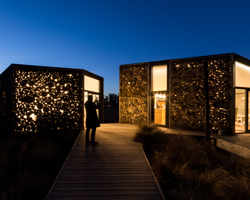 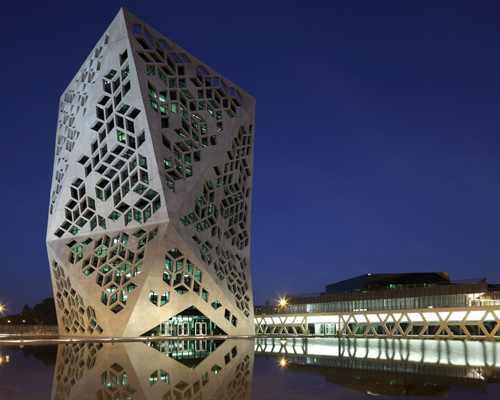 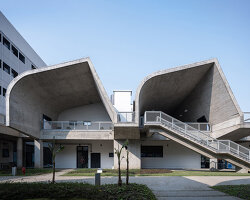 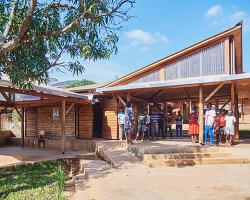