MAD architects announces the opening of its wormhole-like library, entitled the ‘cloudscape of haikou.’ overlooking china‘s haikou bay, the sinuous and organic volume covers 11,000-square-feet and opens widely toward its coastal surroundings. the project, whose construction was last covered in february, marks a celebration of MAD’s ‘anti-material’ approach which prioritizes a spatial feeling over structural expression. the atmospheric interior and formal exterior take shape with a single, sweeping ribbon of concrete that creates a seamless and continuous flow integrating walls, floors, ceilings, apertures in a single celebration of the fluidity of concrete. 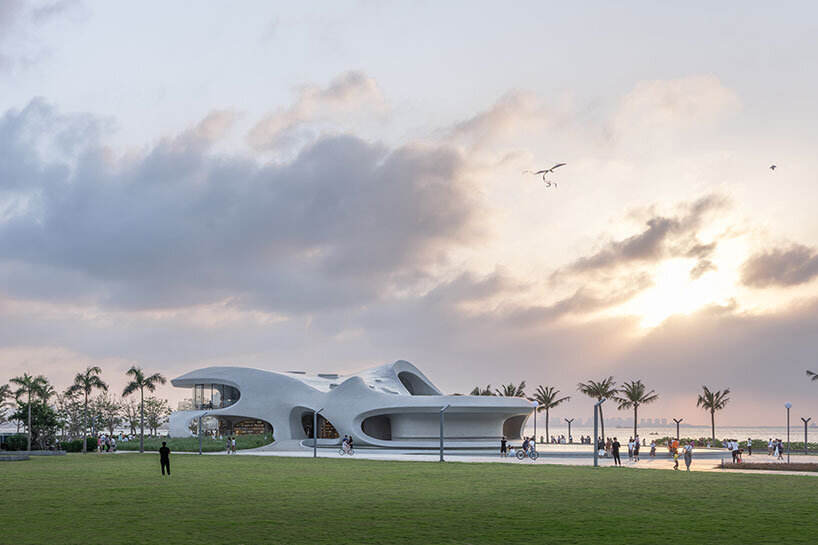 image by creatAR images | all images courtesy of MAD architects

with its its undulating and porous geometry, MAD architects sculpts its ‘cloudscape of haikou’ library to suggest a naturally occurring landform. with its curving arches and caverns, the volume appears to have been carved and eroded by the elements — it was instead, of course, achieved through significant technical innovations and hands-on craftsmanship. the concrete formal language stands as a continuation of MAD architects’ largely similar body of work including the harbin opera house and yiwu grand theater. 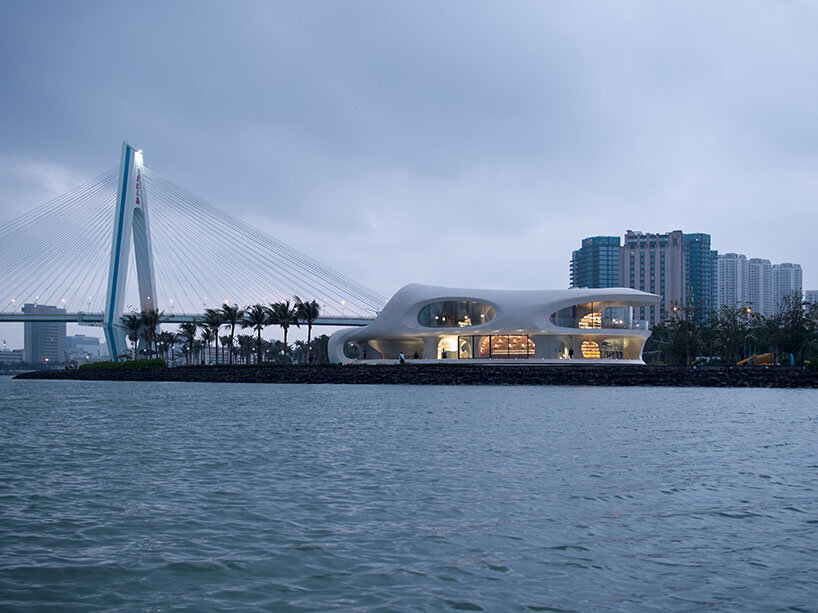 the interior and exterior of the ‘cloudscape of haikou’ are cast in fair-faced concrete to generate a single, unified form. to maintain a flowing, uniform appearance in a building that does not have a single right angle, MAD used both a CNC-cut and 3D-printed model. its roof and floor feature double-layered waffle slabs that support the building’s scale and large cantilever. to minimize visual intrusions in its surfaces, the cloudscape’s mechanical, engineering, and plumbing is hidden within the form’s concrete cavity, and most of the bookcases are in shelving recessed into the walls. 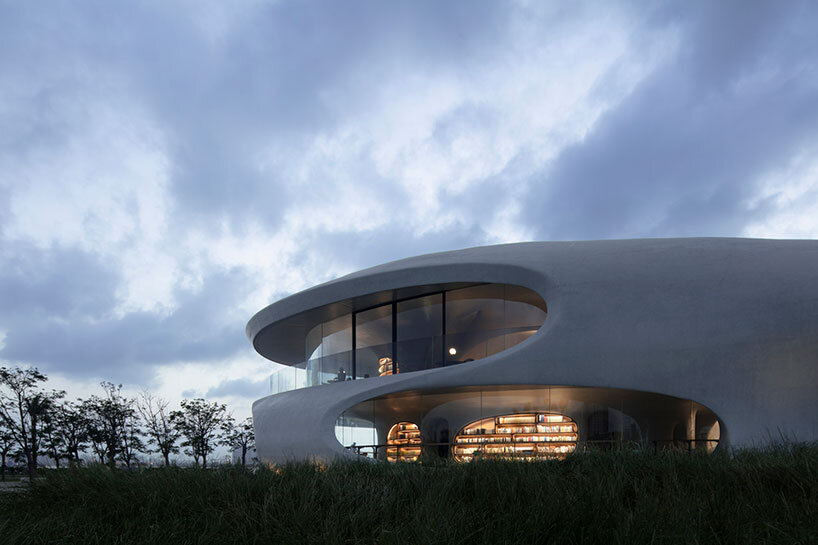 retractable glass curtain walls, curved sliding doors, large windows, and skylights open up over half of the building’s surface. suffusing natural light and fresh air throughout the interior and creating a sustainable and energy-saving building. the extensive use of glass also provides expansive views across the sea and into the sky, inviting respite, reflection, and reverie among visitors. a covered foyer separates the haikou wormhole library from the cloudscape’s 3,500-square-feet of amenities for park visitors, which include a café, restrooms, showers, a nursery room, and bike storage. a large rooftop terrace provides unobstructed 360-degree views, and open and semi-enclosed second-floor terraces extend interior spaces into the outdoors. on its grounds, the cloudscape features a reflecting pool, plantings, and sanded areas. 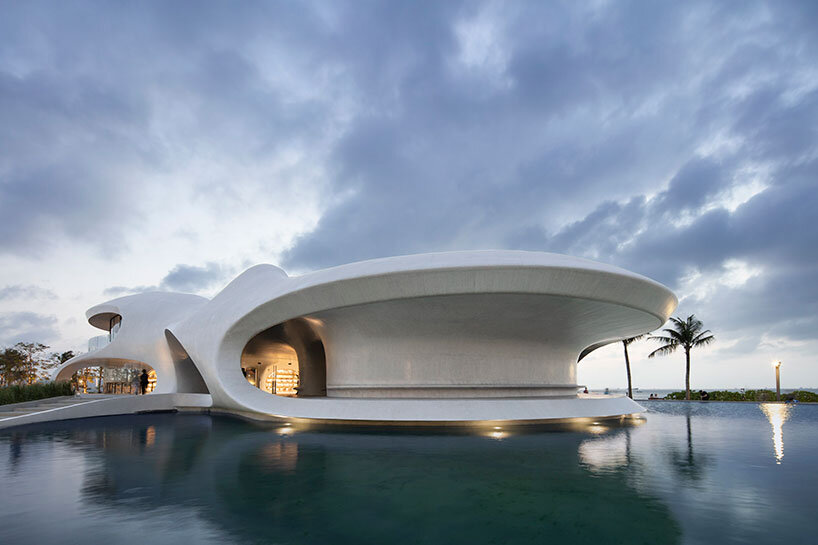 the 7,500-square-foot library is comprised of a series of spaces that flow into and out of one another. the program is organized around a central reading room containing 10,000 volumes that spirals up two stories to a large oculus. the first floor also houses a reception area, office, and a flexible reading and event space, while the second floor features a tunnel-like children’s area with reading alcoves and an intimate reading room that looks out over the water. 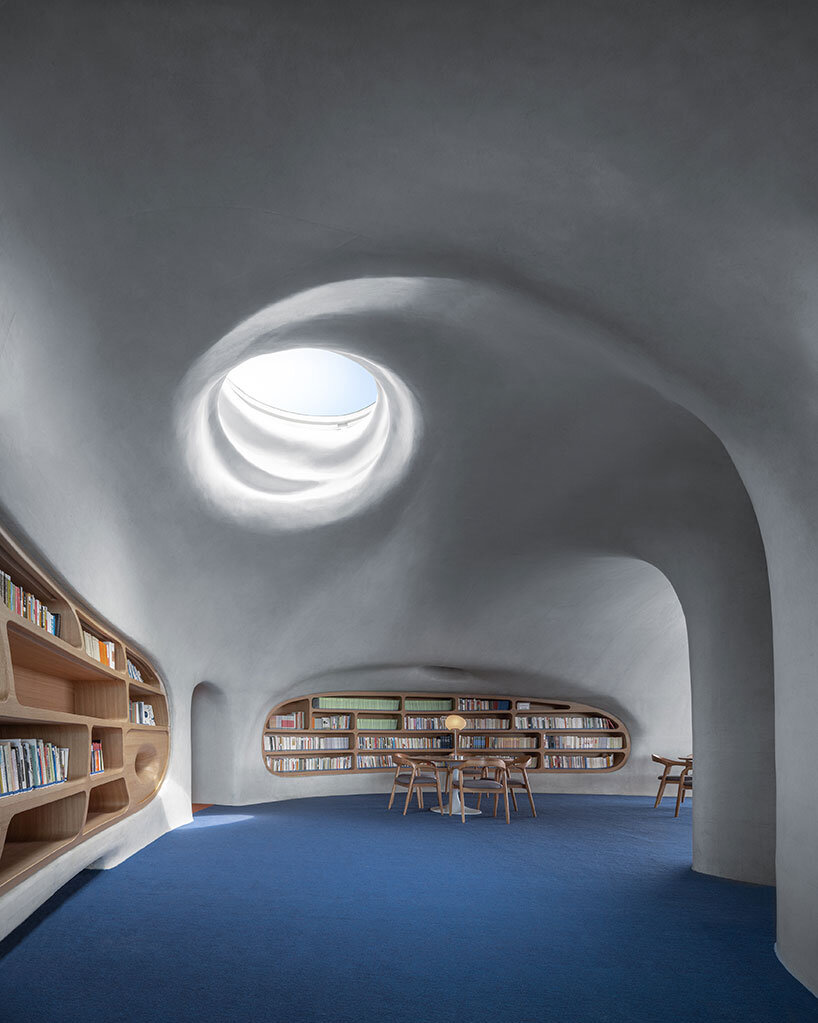 the cloudscape of haikou is the first of sixteen coastal pavilions commissioned to improve public space along the coast as part of the rejuvenation of this historic port city. spread across haikou bay, the initiative is known as ‘pavilions by the seaside,’ and will feature designs by architects and artists including anish kapoor, sou fujimoto, thomas heatherwick, bjarke ingles, kengo kuma, and mvrdv, among others. 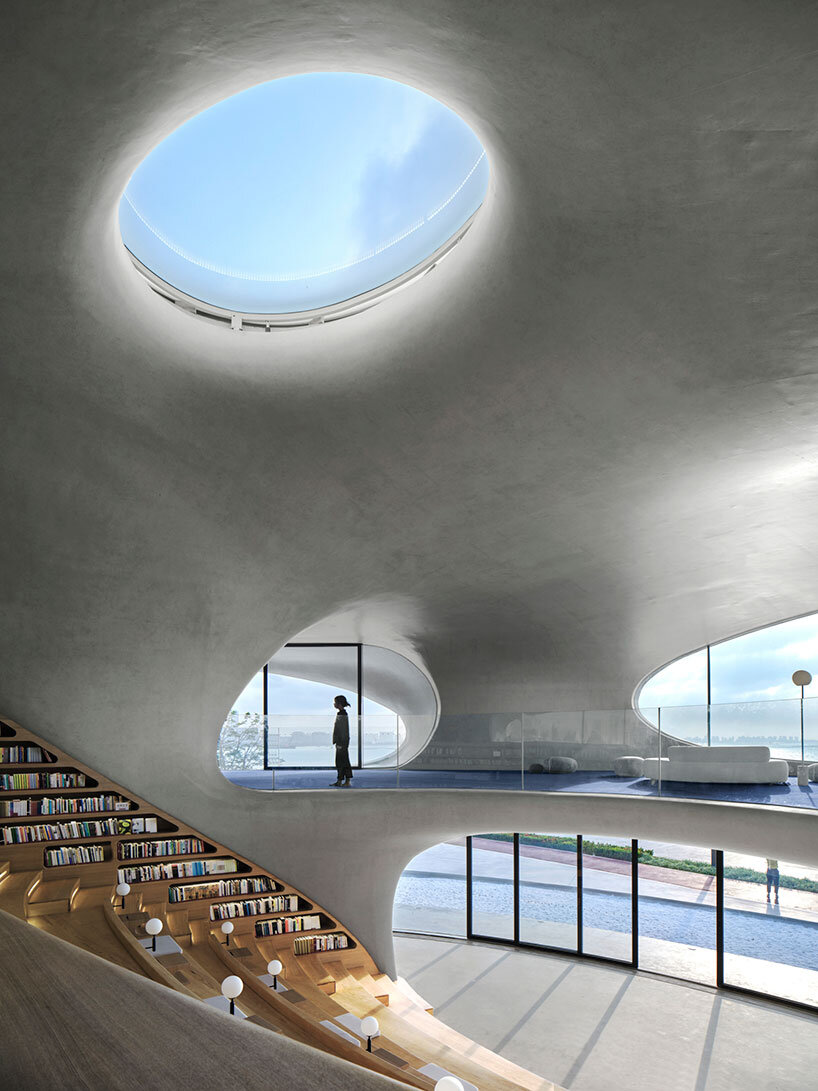 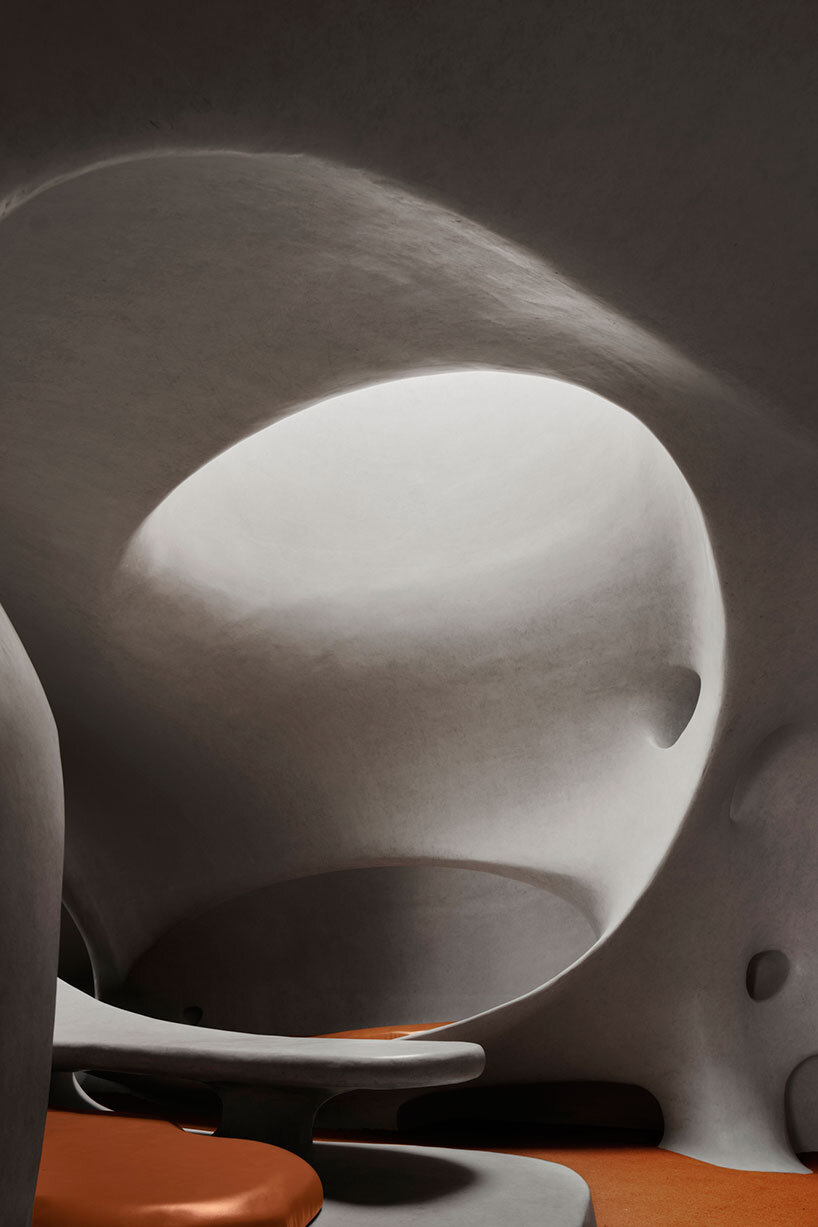 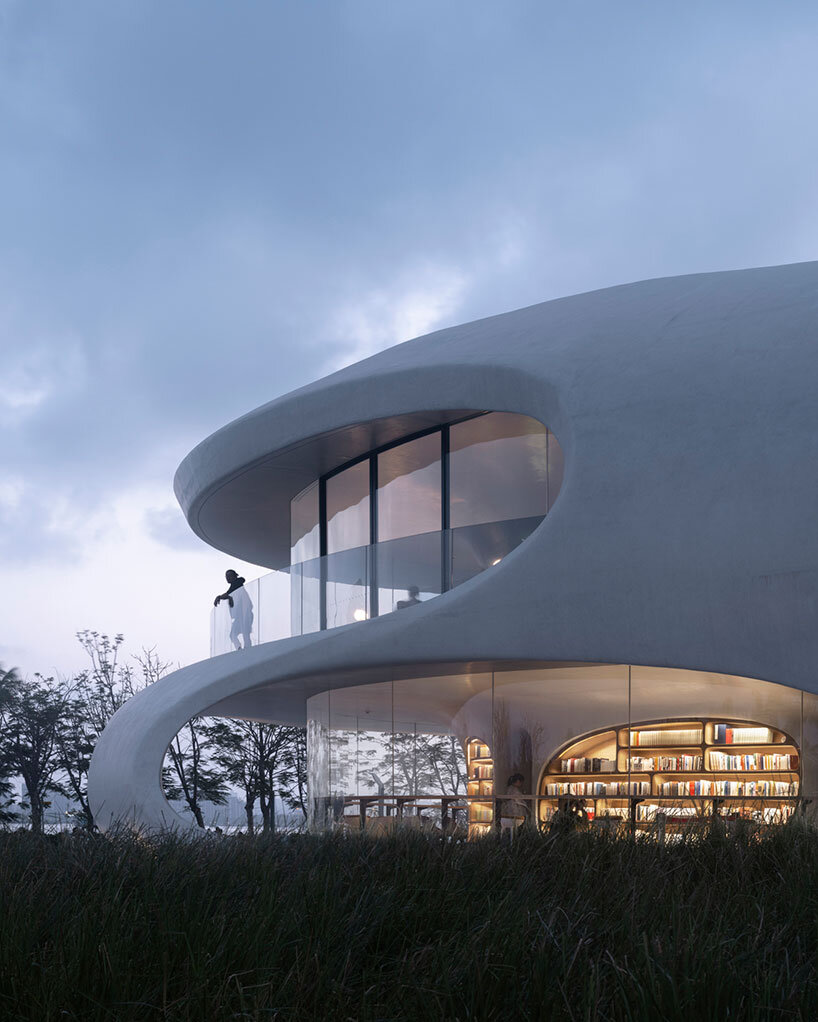 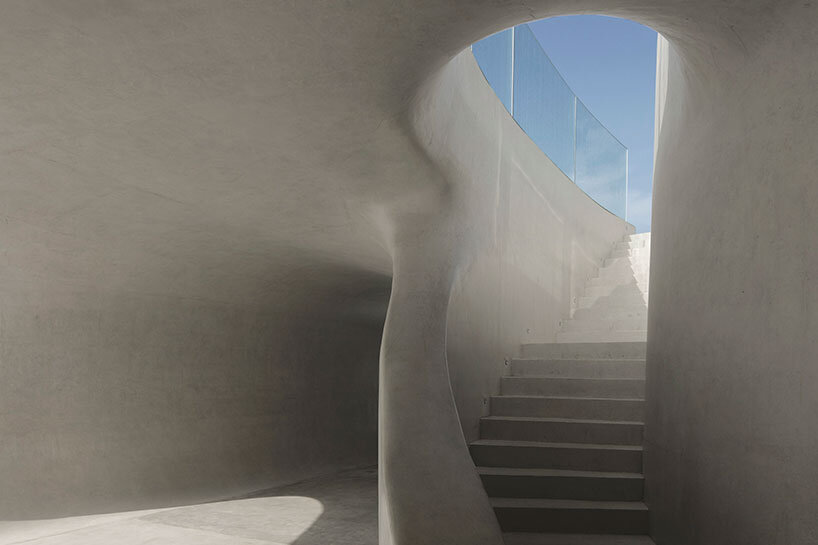 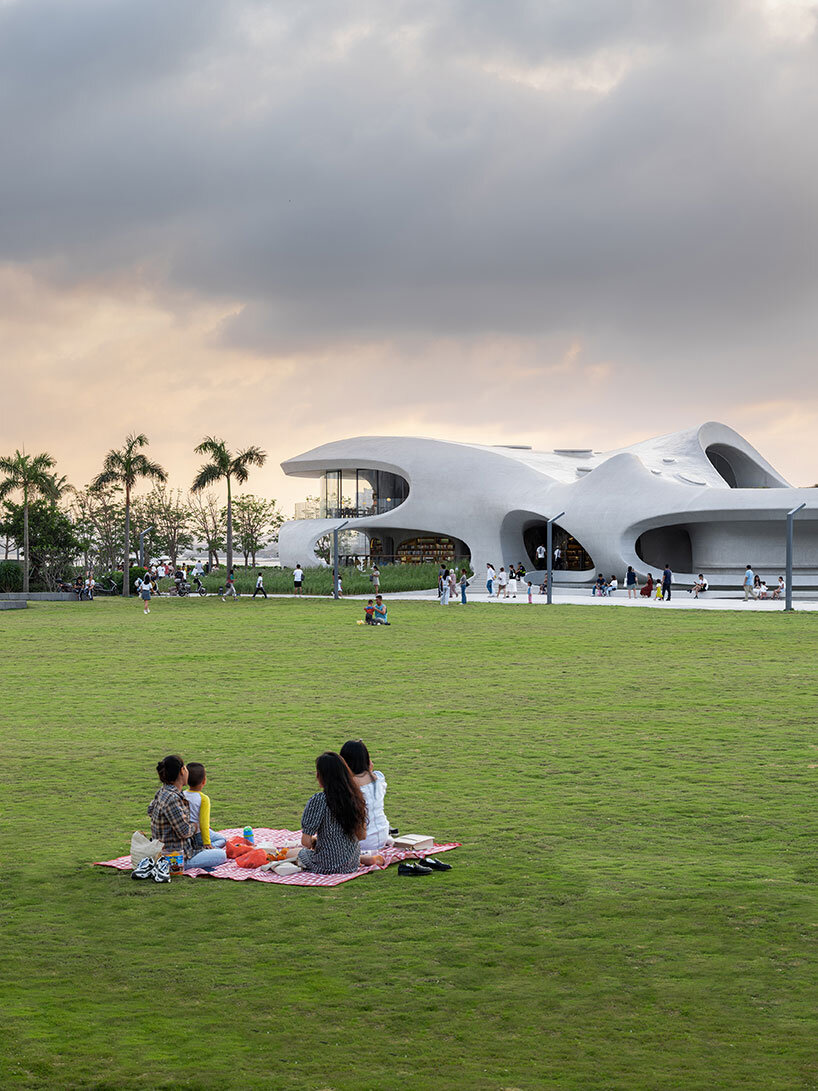 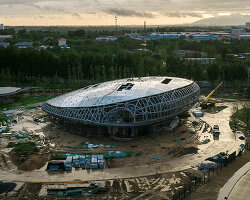