the competition plot for the municipality of suleymanpasa is located where the urban meets the rural in tekirdag city, turkey, surrounded by agricultural land on the north and the marmara sea on the south. the sloping topography is sliced with retaining walls reaching 14 m in height on the northern corner of the plot, in order to create a bus station on the same level with the avenue. the thought that has emerged in response to those walls bordering the green and built areas has been the starting point of manço architects’ design: ‘eliminating the walls of the dam so that the buildings from one side and the greenery from the other mix and flow toward the street level — recreating the destroyed part of the topography with the emerging hybrid tectonic pile.’

istanbul based practice manço architects has solved the functions of the building program as floors with differing sizes stacked on top of each other according to different parameters. these include the level of connection with the street, interrelations among the municipality units and load bearing structure concerns. the building mass has been shaped as cascades parallel to the retaining walls, in order to refer to the slope of the topography. 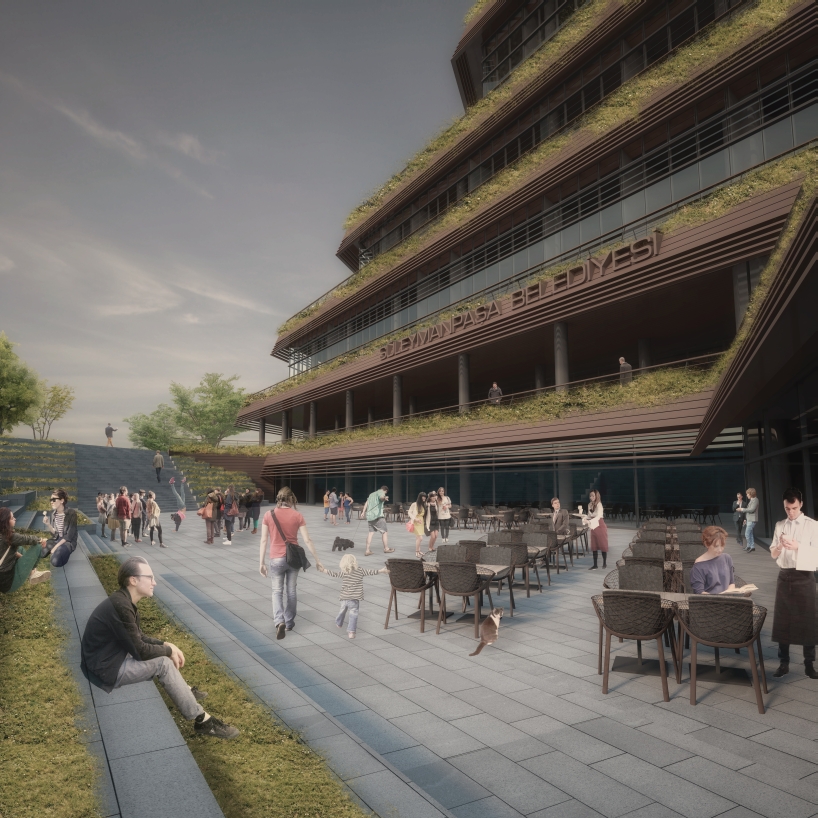 view from the forecourt surrounded by cafes and restaurants

by creating continuous and sloping roof surfaces, the grades of the building mass are connected with the street level on the western corner of the plot. this has been done to link the terrace areas with the pedestrian circulation on the sehit yuzbasi mayadagli avenue. except the walking and functional areas, the roofs were covered with vegetation, in order to visually unite the inaccessible green tissue of the cemetery on the east of the plot with the street. it was aimed that the roof surfaces that can be directly reached from the street will become public open areas where the city and sea vistas can be viewed. 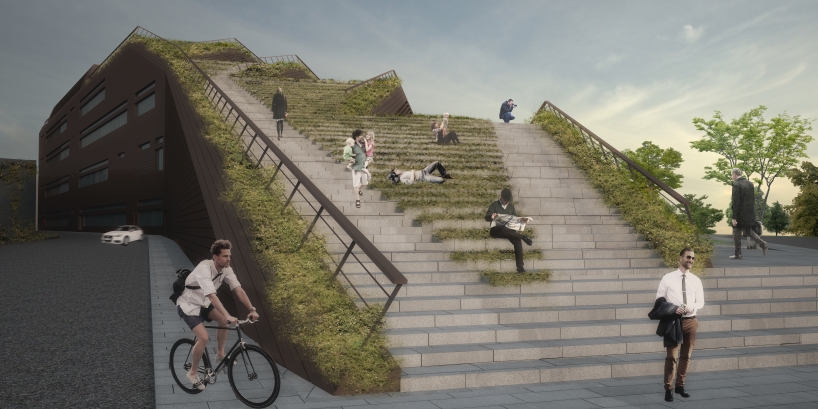 manço architects has predicted that the commercial areas, which occupy a substantial area of 2000 m² in the program, will be retail and restaurant spaces open to the increasing public use of sehit yuzbasi mayadagli avenue. accordingly, this region as well as the conference and dining halls are located close to the ground level with independent entrances from sehit yuzbasi mayadagli avenue. likewise, the municipality part has also planned to have direct contact with the street regarding both circulation and visual perception, in order to display qualities such as ‘transparent, community-centric, equal and just’ mentioned in the foreword of the program. 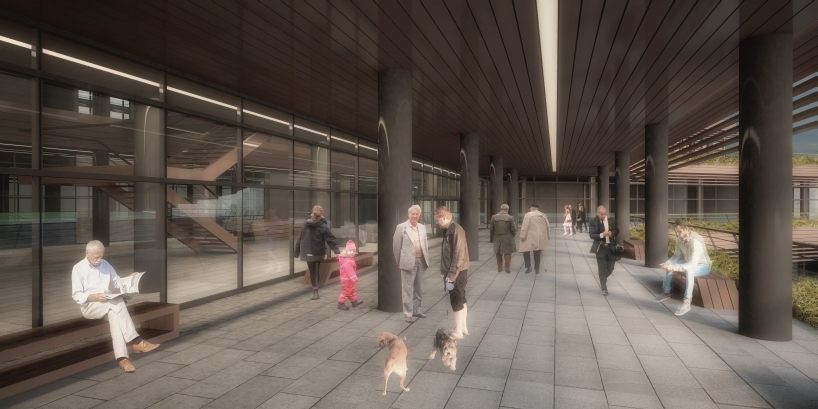 colonnade leading to the entrance of the municipality

the municipality departments were lined along the façades within a depth enabling natural lighting. in order to maximize the penetration of sunlight into the interior of the building, an atrium void was opened up in the center. the horizontal and vertical circulation among municipality units was planned around the atrium so that users move through illuminated and vivid interior spaces while running into each other. 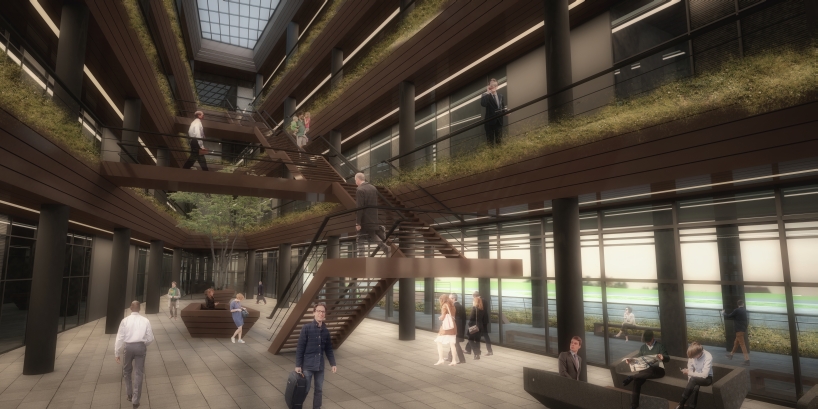 entrance hall of the municipality

artificial HVAC costs were minimized by providing natural cross ventilation through operable windows on the façades, as well as the glass walls facing the atrium. the heated interior air will ascend through the gallery void and be exhausted through the automatic openings on the skylight. a much higher level of thermal insulation than standard roof layers will be provided with the vegetation and earth used on the green roofs. it is also predicted that the green roofs will be occupied with local bird breeds. plants that are adaptable to the climate and require minimum watering and maintenance will be preferred for the landscaping. 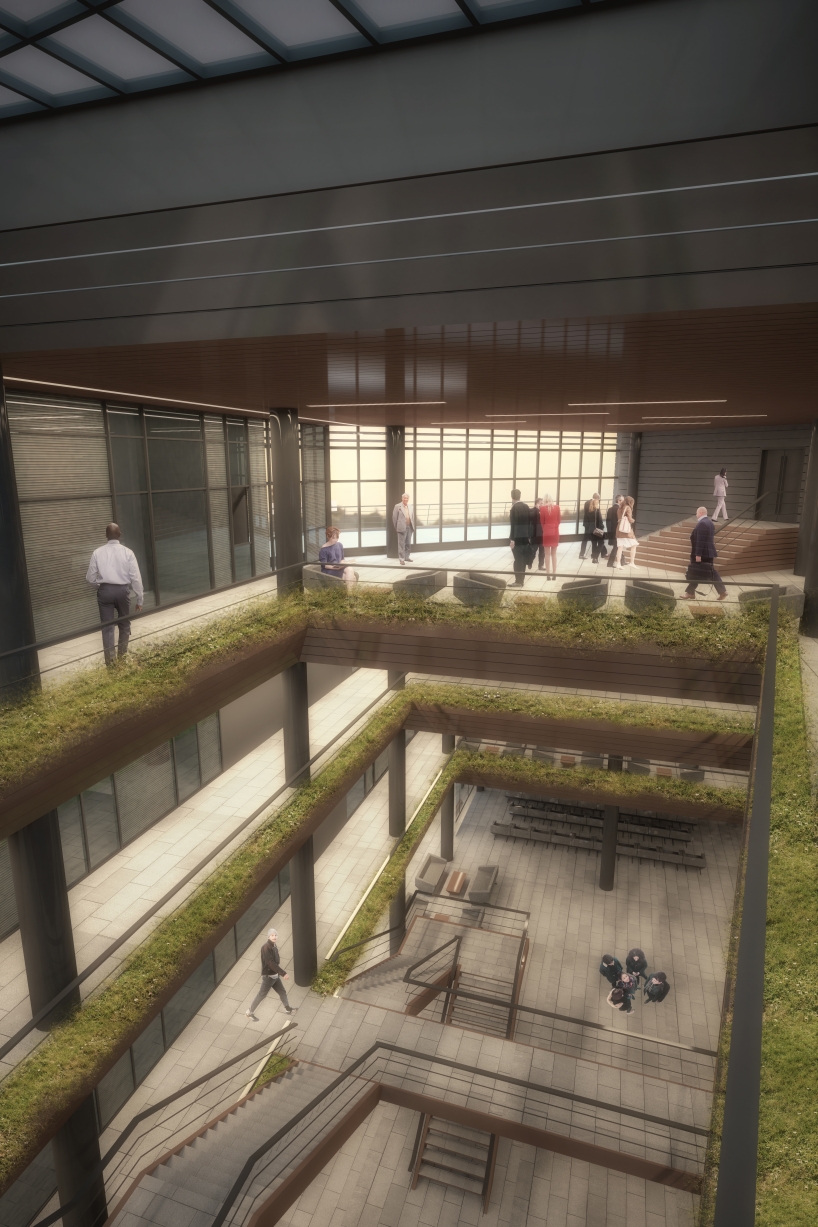 view from the atrium 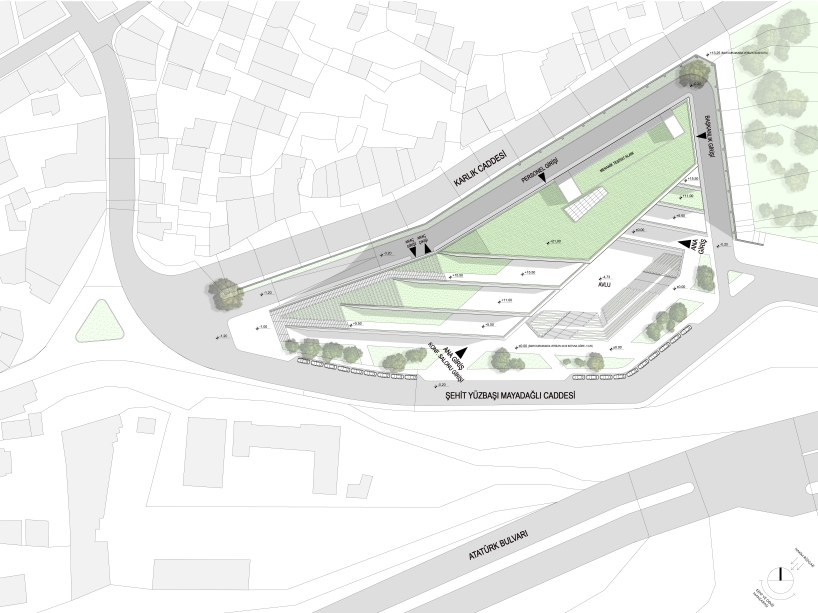 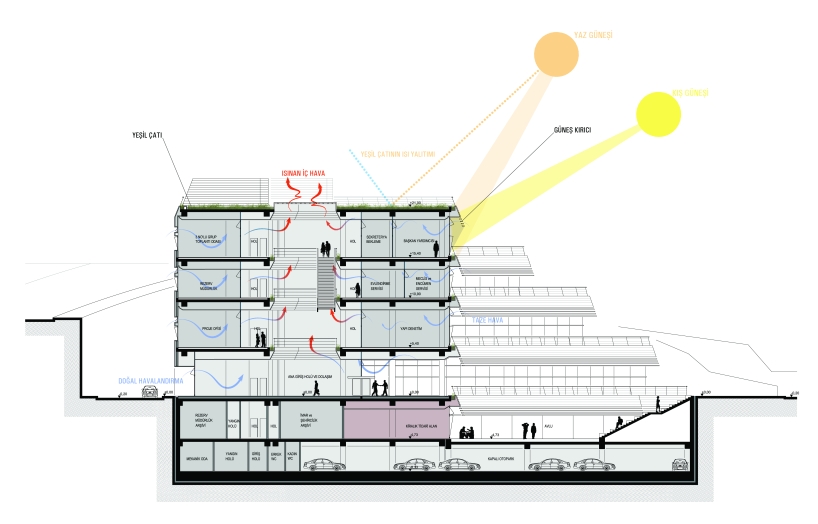