Margot Krasojević has designed an off-road proving ground located in Mongolia‘s South Gobi Desert. The design team sought to form a year-round testing place for new model vehicles to test the limit of their engineering. The structure features viewing tunnels, flooded areas, varying surfaces, and ground gradients for versatile testing configurations. The construction concept was to adapt to the site climate and integrate with its rapid and harsh environmental changes. The Mongolian desert temperatures range from -30 to +38 degrees Celsius throughout the year and can see an abrupt change daily.

The final composition emerges as a fossil-like presence that follows the movement of the rolling sands of the desert, which reveals landscapes giving a new configuration to the topology. With the same logic, the building which is partially submerged into the sedimentary rock captures this transformation by being exposed and covered by the sand. Therefore, the architects aimed to create a monolithic volume that appears to be carved out of desert rock and partly hidden to be discovered. 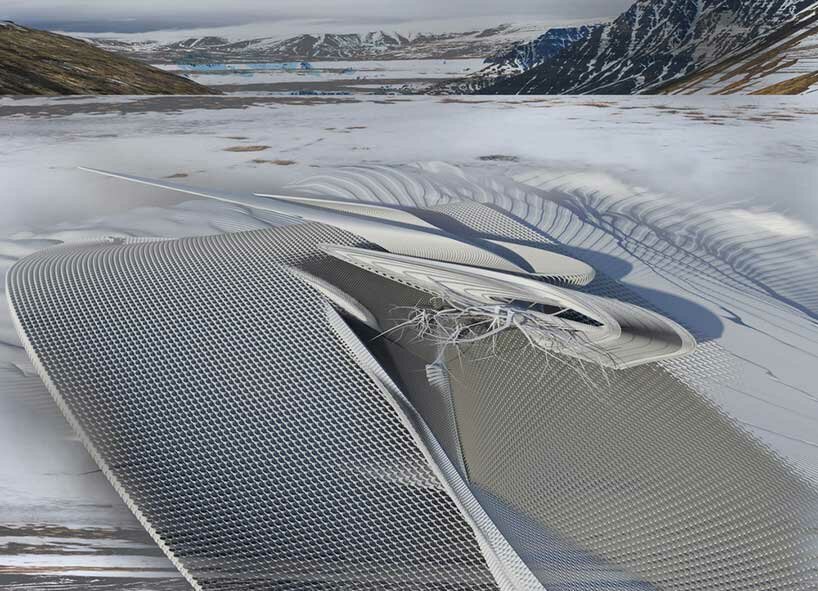 all images by Margot Krasojević

Located 80 kilometers north of Mongolia’s border with the People’s Republic of China, 100km from Khanbumbat Airport in the province of Khanbogd, Ömnögovi, and 10km from lake Buir, the project by Margot Krasojević (see more here) is activated in response to the climate conditions. The structure rises out of the landscape when in use and is concealed under snow and sand when idle.

Sponsored by SIAC cars, the project consists of three zones: The first includes torsional obstacles, twist tracks, surface response, and skid slopes for endurance, the second one comprises viewing and facilities, and the last hosts artificial hydroplane flooded and frozen areas. The building is conceived as an artificial landscape, simulating environments of different driving conditions, using solar and piezoelectric engineering. These conditions include snow, ice, wet and dry asphalt, and functional and endurance testing grounds for adaptable testing formats. 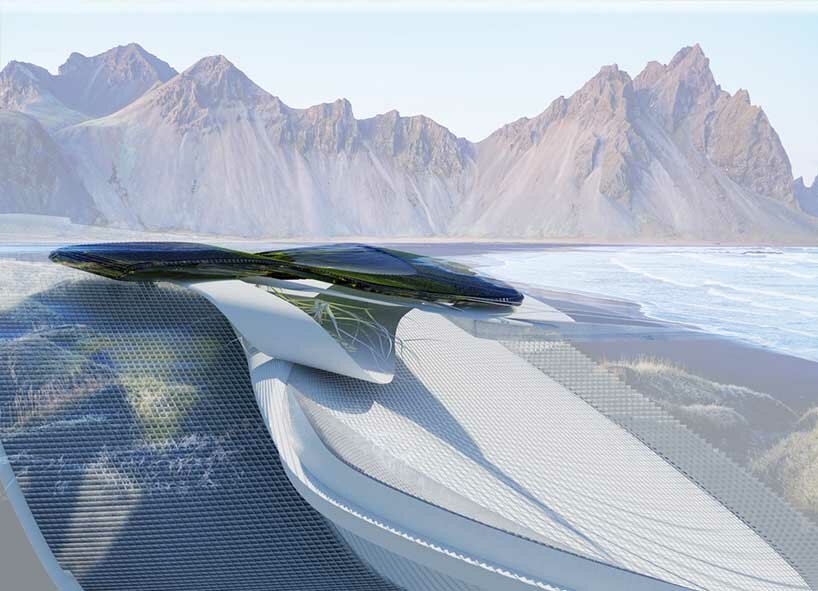 the building acts and responds like a barometer, adapting and providing the proving ground with artificial environments to facilitate testing

The primary structure takes shape as an extruded barrel vault, partly sunk into the desert rock. Its underground body serves as a cooler environment that accommodates part of the race track, skid circle pads, hydroplane, and testing facilities. The design team placed a cantilevered ramp that emerges from the primary volume, using hydraulics to vary the track gradient and driving conditions. The buried building enlivens with the motion of the vehicles. Each of them is equipped with sensors to activate areas of the track.

According to the architects, a hydroplane area wraps the track on the ground plane and freezes part of the primary structure, making use of the nearby reservoir. A refrigeration system for polished ice surfaces, cooled using solar generators that decorate the looped race track generates a maximum capacity of 50KW. The entire experience is enhanced by viewing galleries and cameras running throughout the track, tracing the car movements all the time. 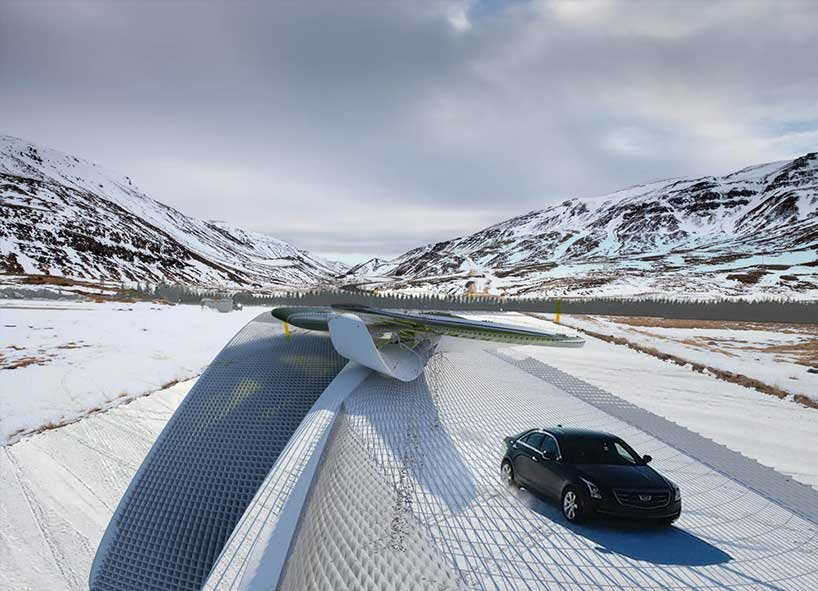 The looped track, which emerges from the main structure ‘simulates off-road conditions with break tests and surface transitions, descending onto the ground plane as it unfolds onto the skid pool and a road winding around the entire site. The looped road/surface can hydraulically expand to slide into the landscape, increasing the terrain to 2km. The loop track uses pre-cast sections that can be replaced according to the vehicle’s traction, suspension, and break testing needs,’ stated the architects.

The looped track can simulate any conditions: surfaces include potholes, deep sand pits, gravel, rumble strips, sine waves, undulating asphalt, and cobblestoned road sections. These track sections are supported hydraulically to alter the road gradient depending on testing needs. As the loop track dislocates and slides along the primary structure, it descends onto the landscape to reveal a glass atrium. 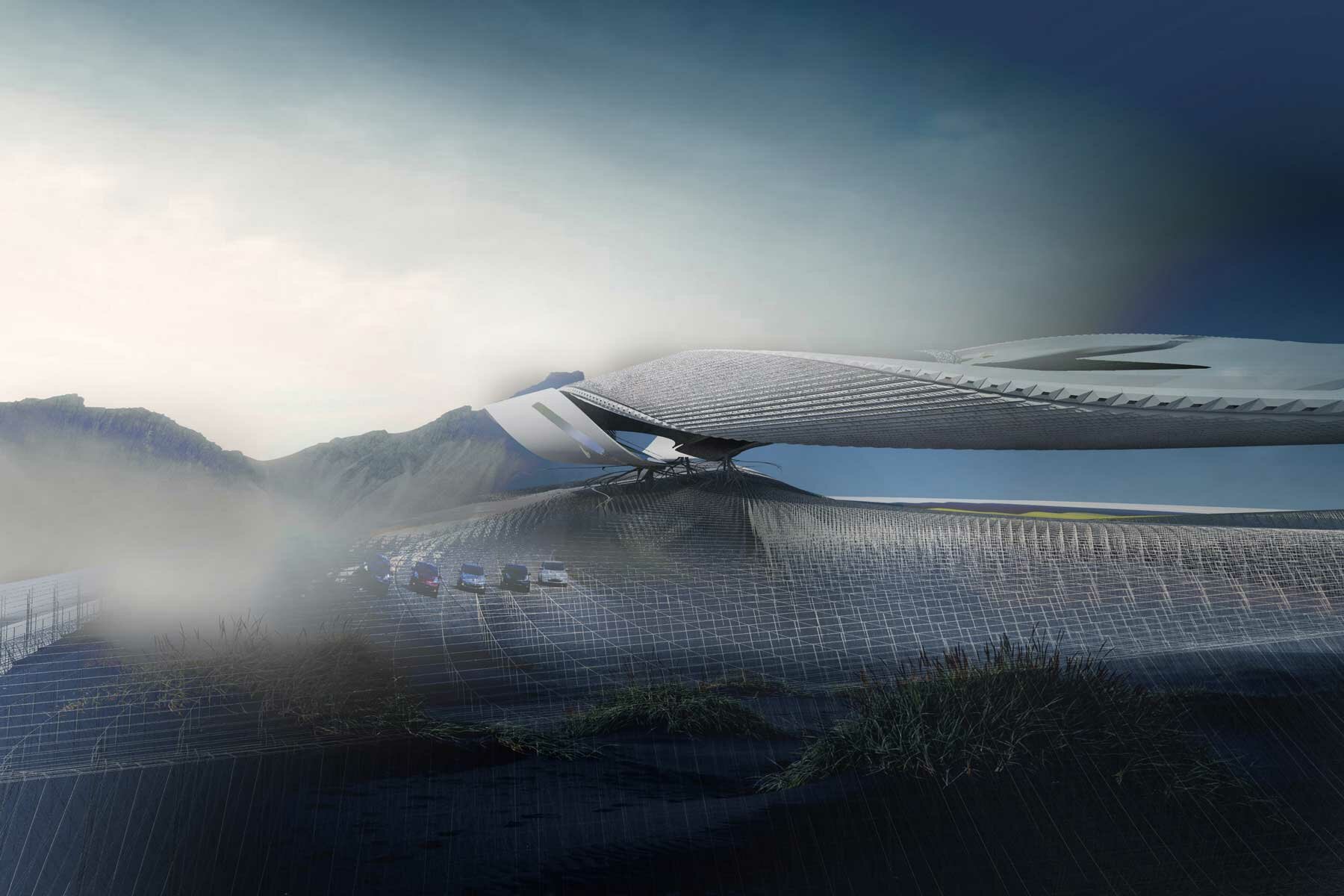 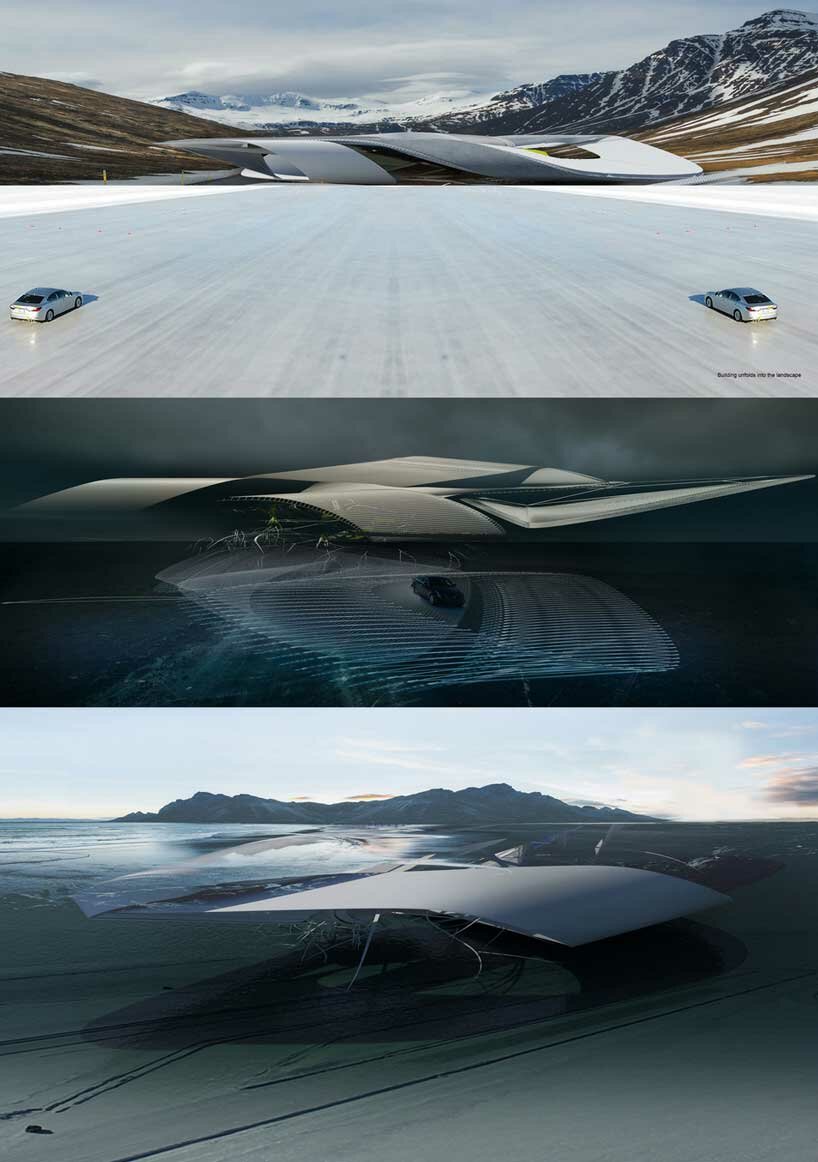 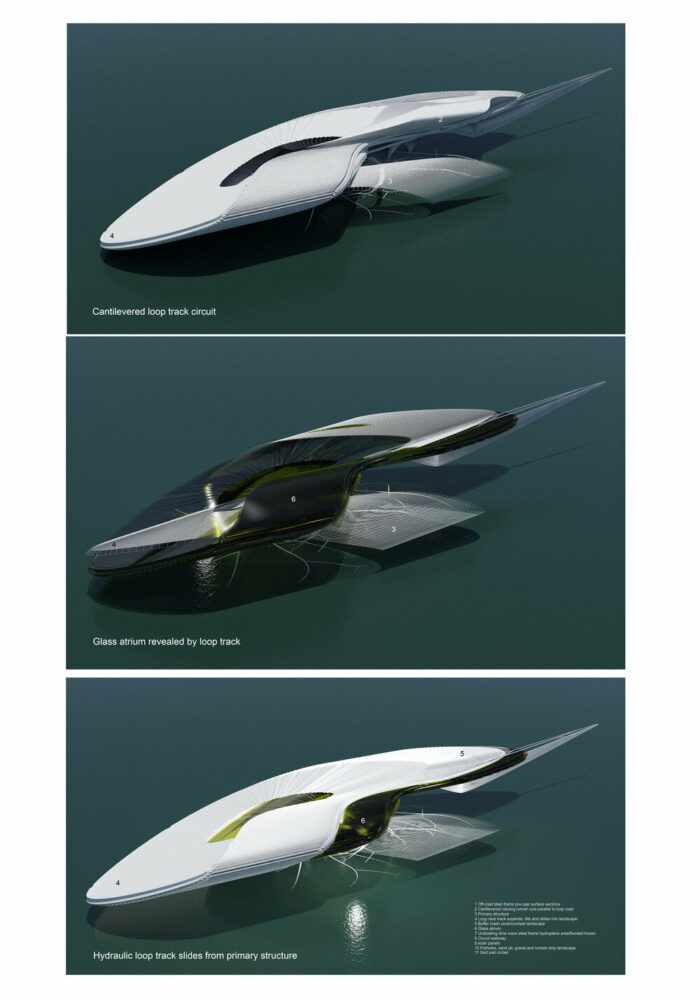 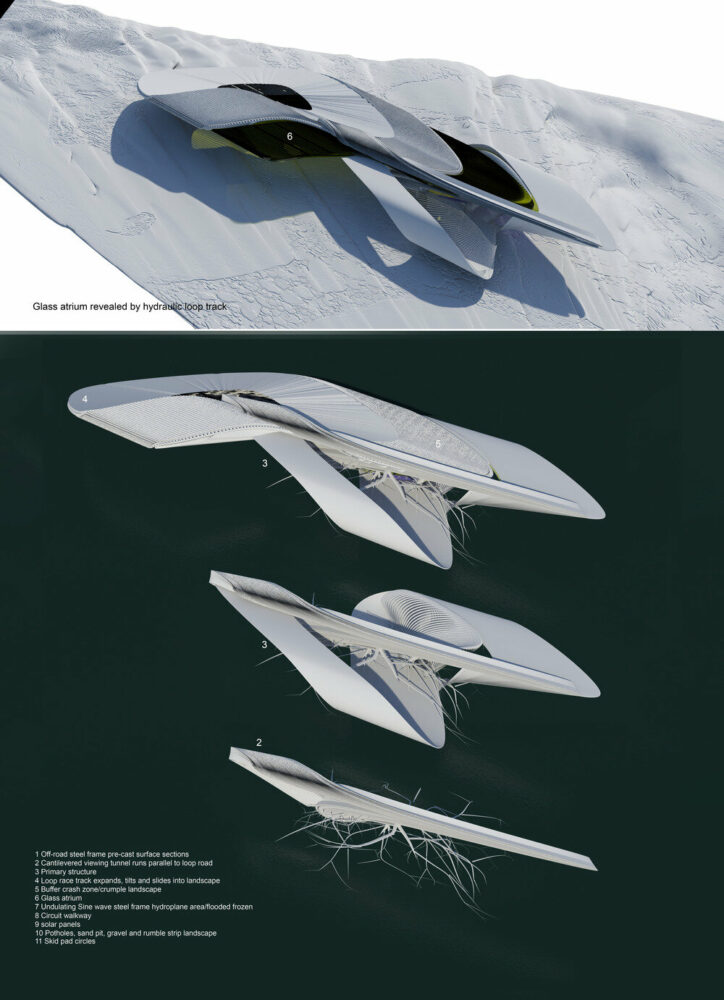 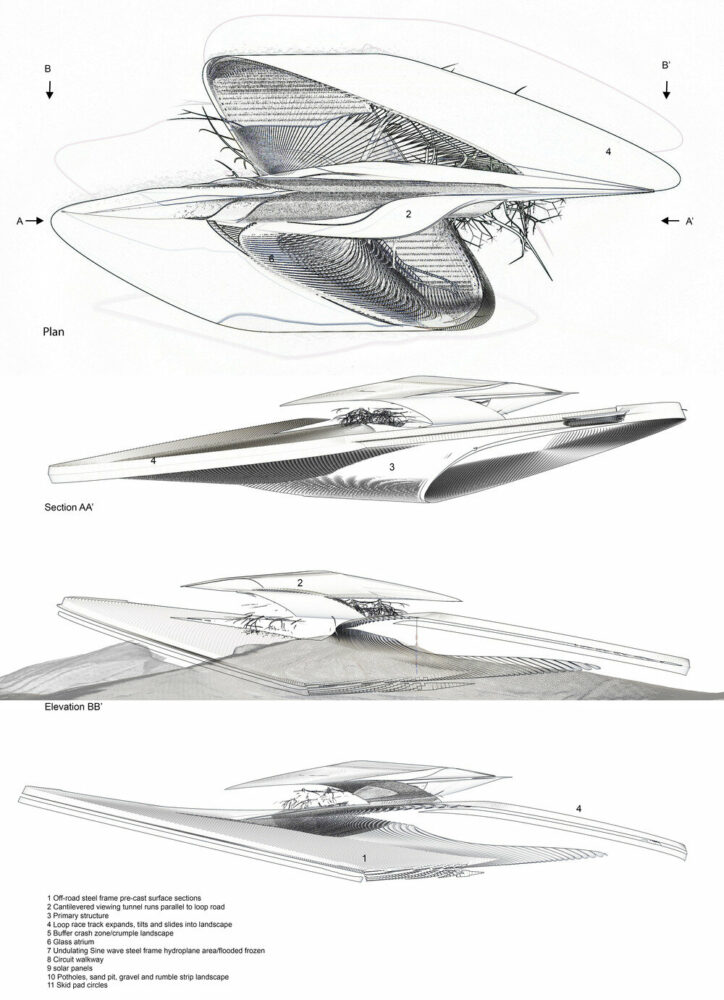 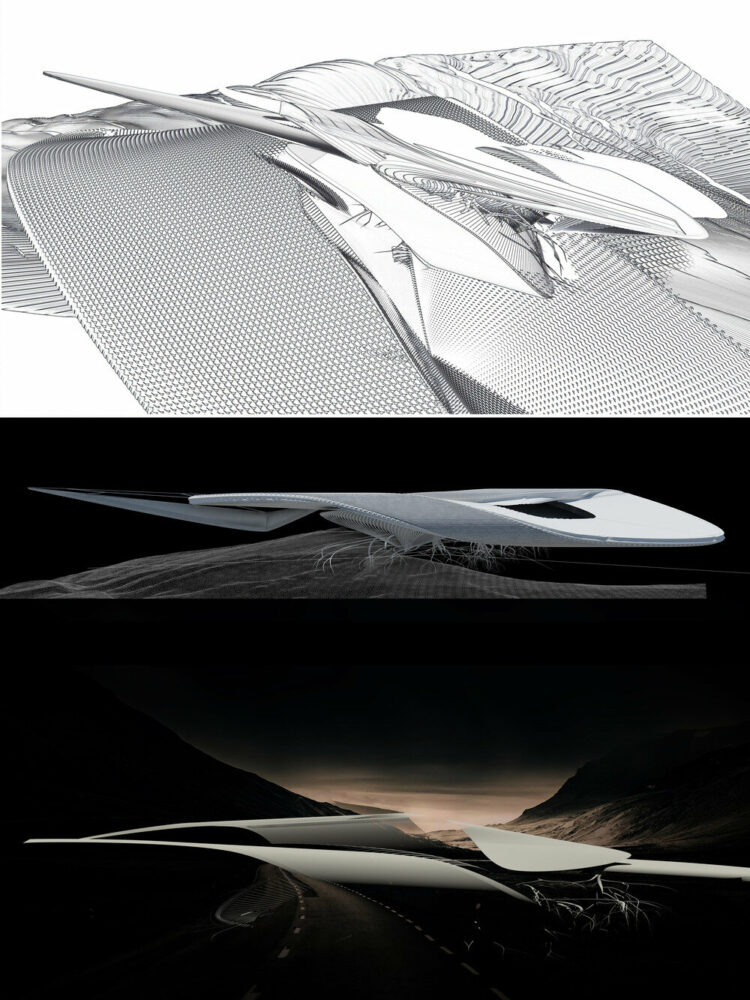 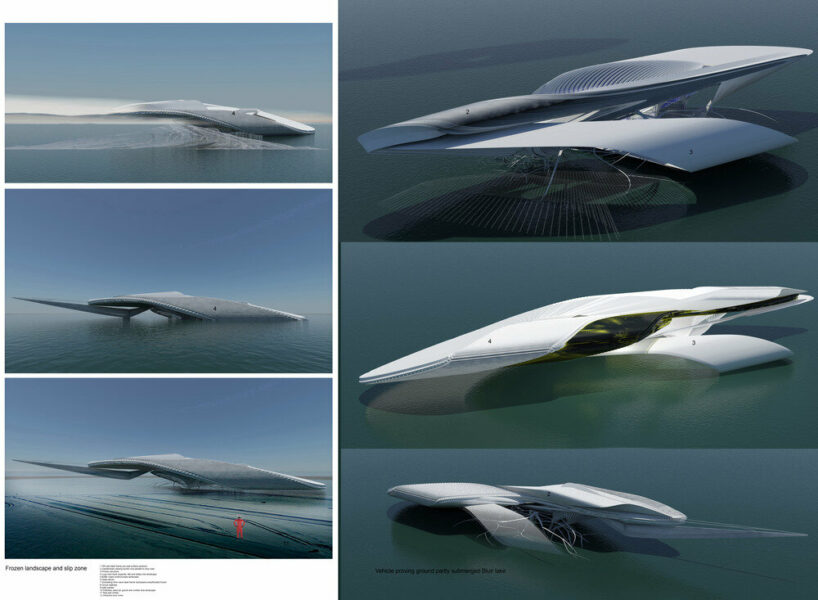 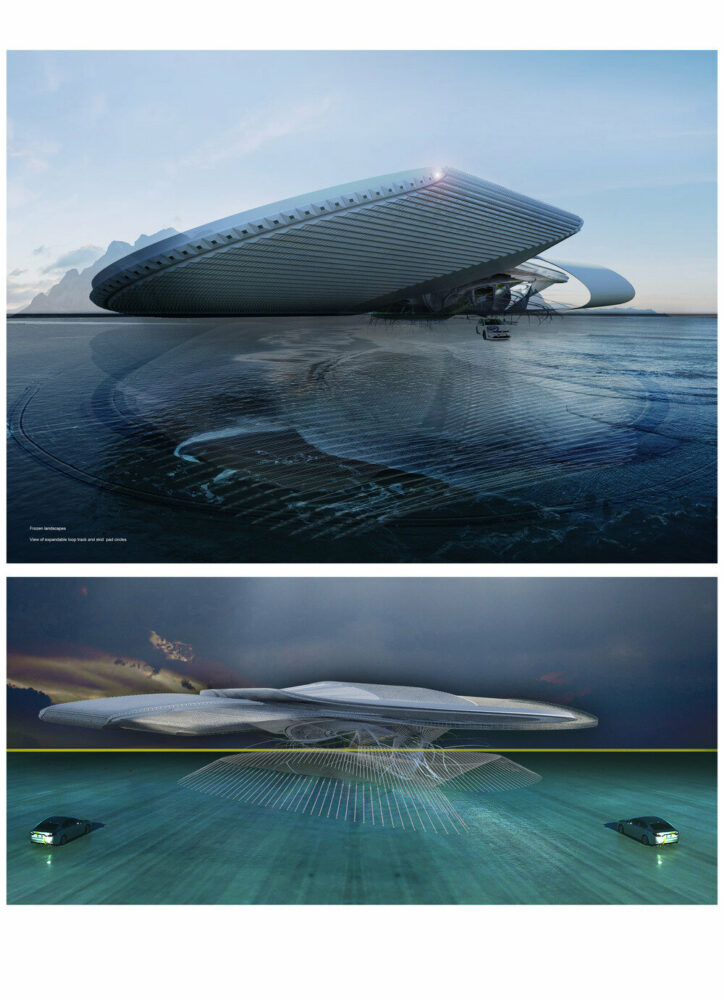 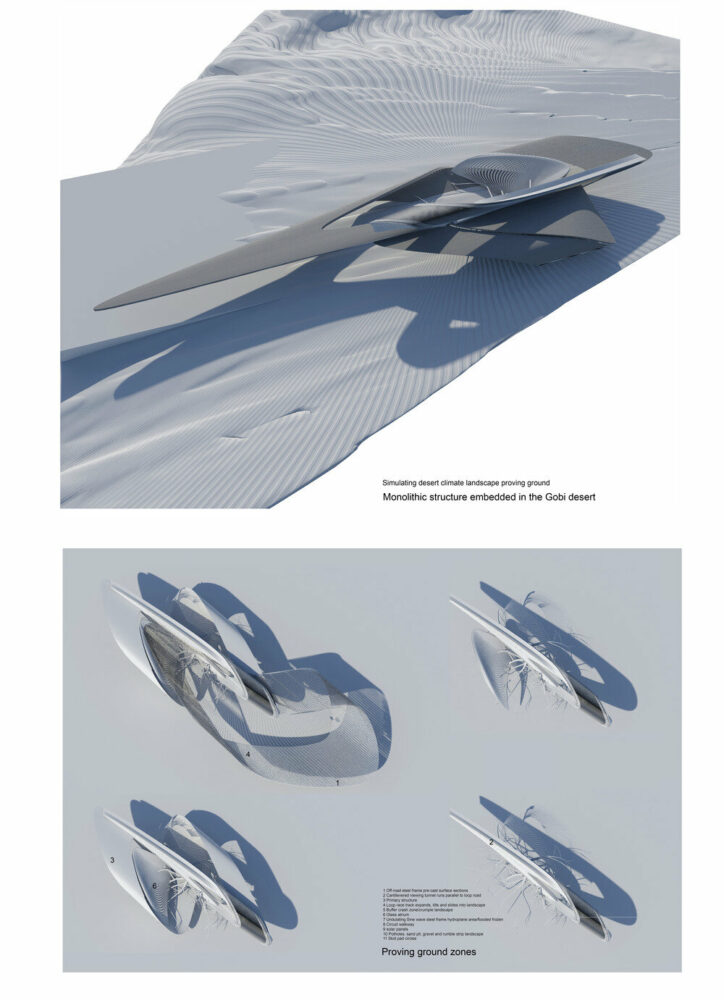 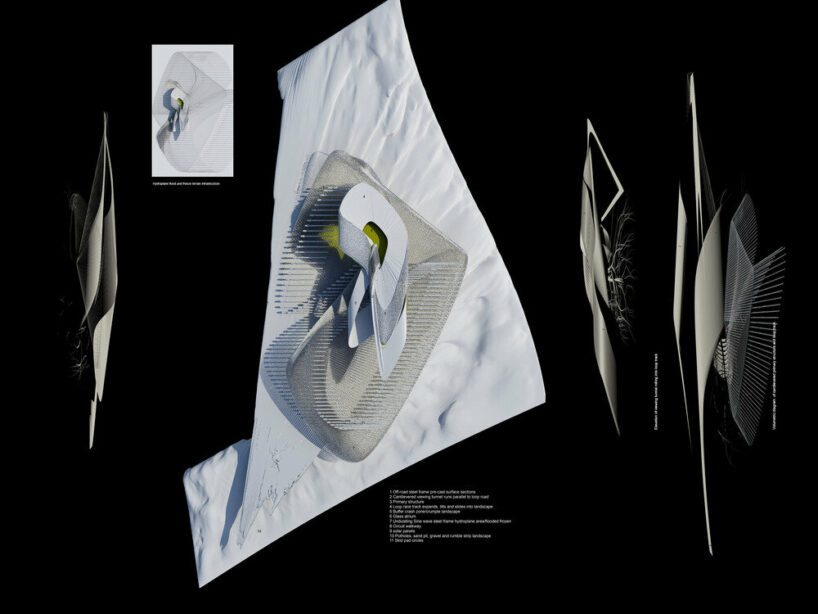 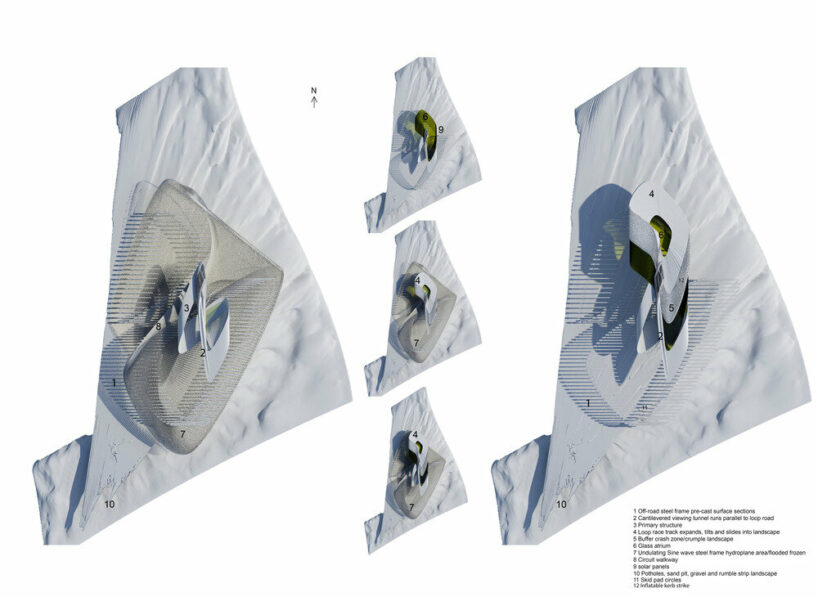 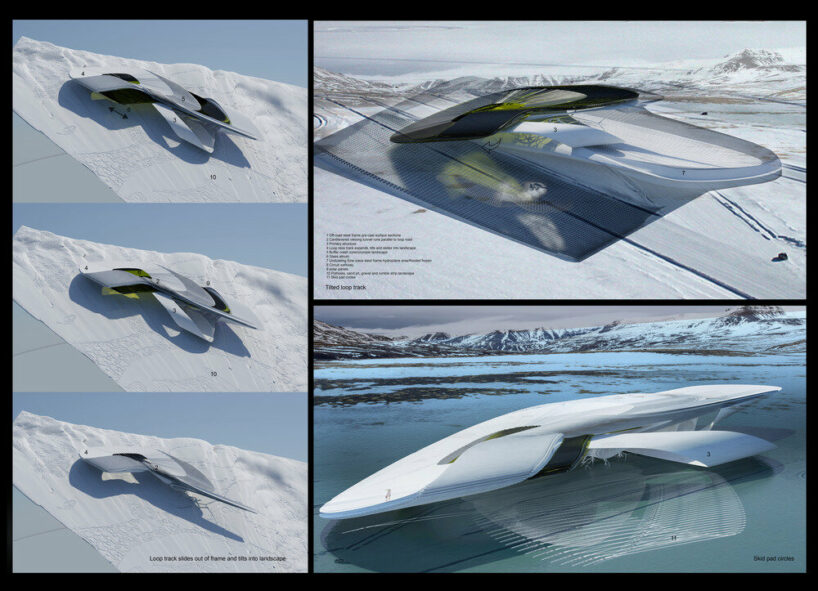 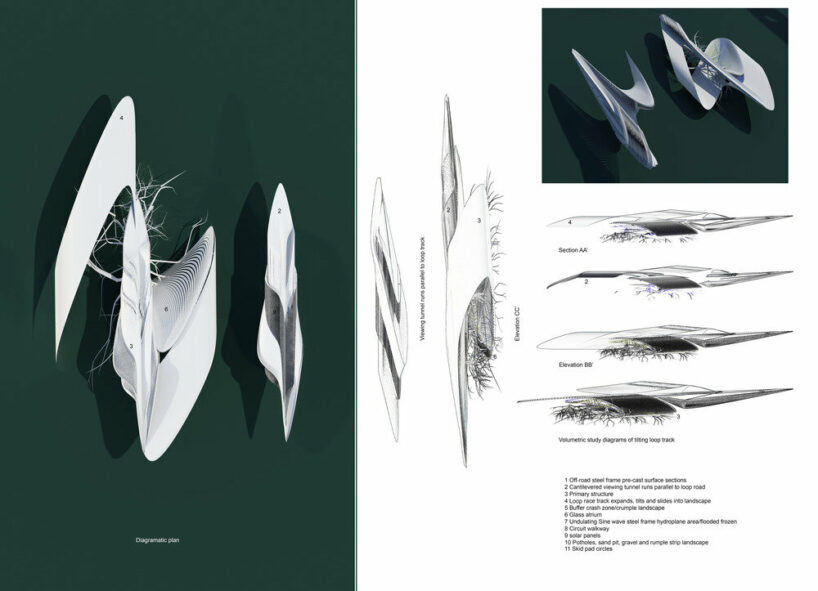 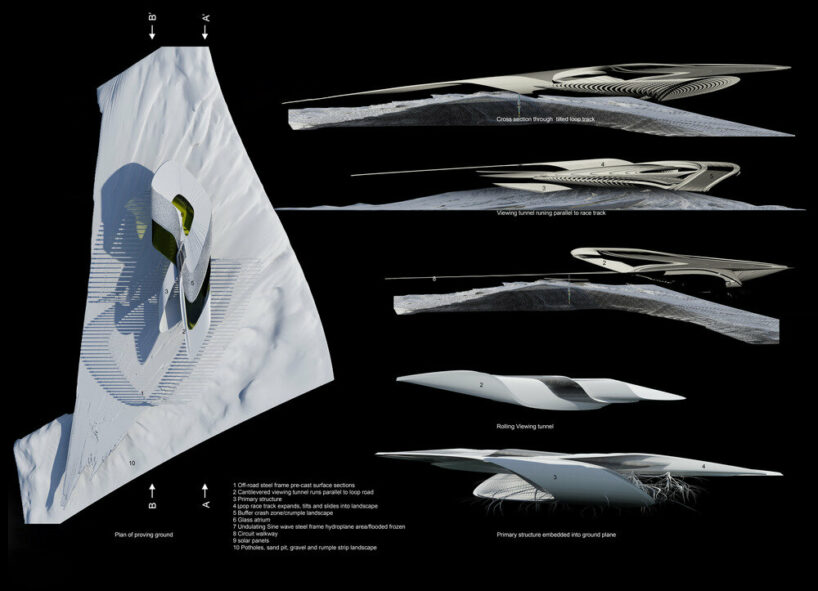 collaborators: Out to tender 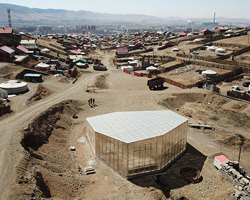 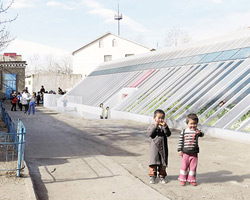 May 19, 2015
blackboard wall runs the length of MUDI's tsast altai school in mongolia 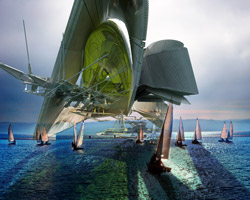 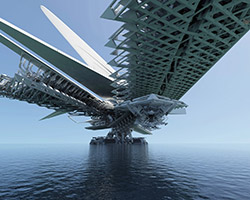 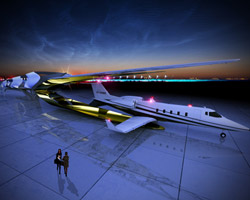 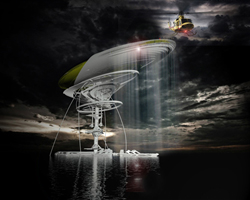