marte marte architects has released three new films that take a closer look at its most sculptural works. the series, titled ‘appearing sculptural’, takes a dynamic, cinematic approach to the austrian studio’s past projects — including a concrete pedestrian and bicycle bridge in vorarlberg, a monolithic mountain cabin in laterns, and a walk-in sculpture in feldkirch. 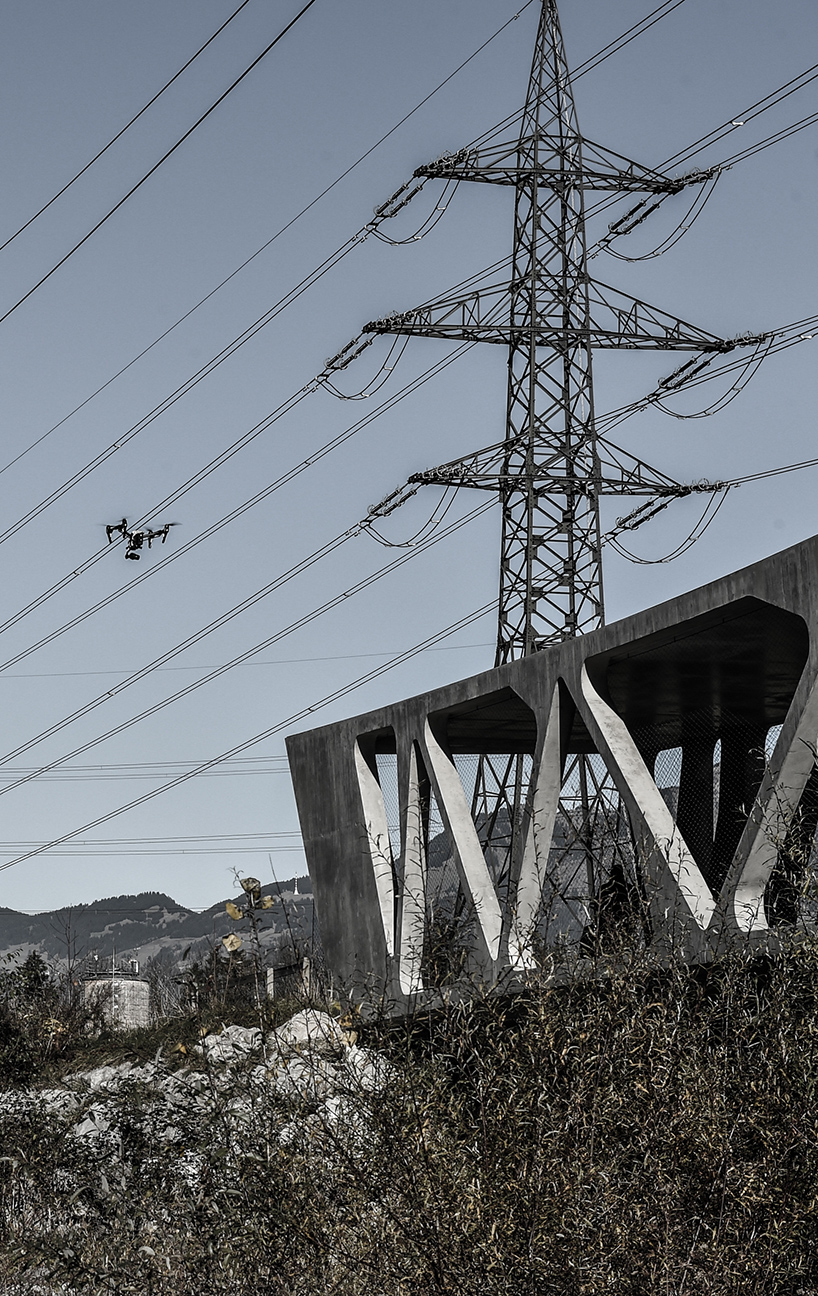 the audiovisual series comprises a total of six short films created by photographer and experimental filmmaker andreas waldschütz, who has unconventionally re-staged some of marte marte’s most familiar buildings. meanwhile, the dark ambient-like soundtrack of composer and sound-designer stefan hoffmeister is based exclusively on recordings made on location.

to understand more about marte marte’s work, designboom spoke with stefan marte, who explained the firm’s output in more detail. read his thoughts below, and stay tuned to see three more films focusing on the studio’s projects. 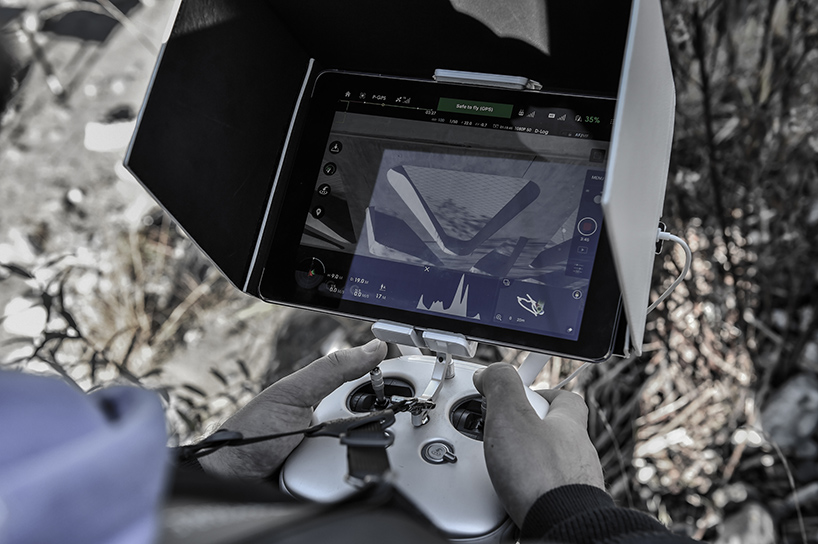 DB: can you tell us about how your firm became involved in so many infrastructure projects, particularly bridges?

SM: it all started with the froedisch bridge, that we built in the year 1999. the pathway, made out of corten steel plates with a clear span of 40 meters, was designed as an extension to an existing stone bridge to accommodate pedestrian and bicyclist traffic. the project showed us the enormous potential, which lies in the field of infrastructure. since then we are working closely with an engineering firm we are friendly with. the next project was the characteristic bridge trilogy in dornbirn-ebnit, which we have started in the year 2005. the city of dornbirn (the client) quickly realized, that the additional value is enormous, if an architect gets involved in the planning, design and construction of infrastructure buildings. by the way, the third of the trilogy is currently under construction. 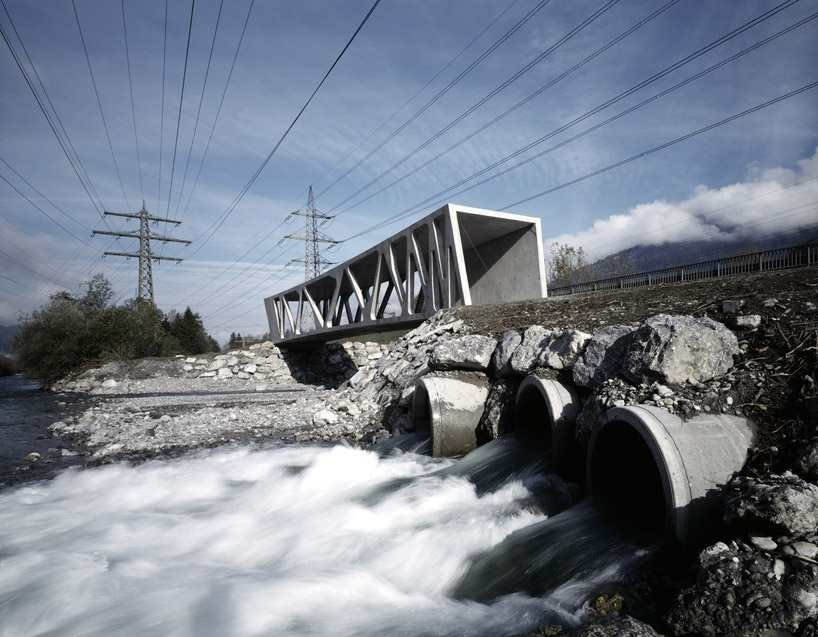 DB: traditionally architects leave these types of projects to the engineer. why do you think it is important for architects to get involved?

SM: let’s take vorarlberg as an example. it is a small federal state, well known worldwide for its high density of building culture. but we really have some catching up to do when it comes to infrastructure buildings. their appearance is generally determined by function and economy. building culture very rarely exists. therefore we have to continually ask ourselves, which additional value we can generate of a project. a good building is not only a building with high usability. it is also a building, which is able to touch people emotionally. if a building is able to surprise and touch people over and above its mere function, then it could become a characteristic element, a landmark of a city/landscape and its entire environment. a much-loved place that will be preserved and carried further over generations.

DB: can you give us some more details about the five cubes presented at this year’s venice biennale, and what each one shows?

SM: we are showing five realized projects. each cube was cast in concrete and afterwards sculptured by hand. we have two bridges (alfenz bridge and schanerloch bridge); an outdoor museum, which exhibits archaeological roman finds (roman villa); a holiday home in the alps (mountain cabin), and last but not least, a protestant diocesan museum, which is a memorial place for the history of protestantism in austria (fresach dioscesan museum). 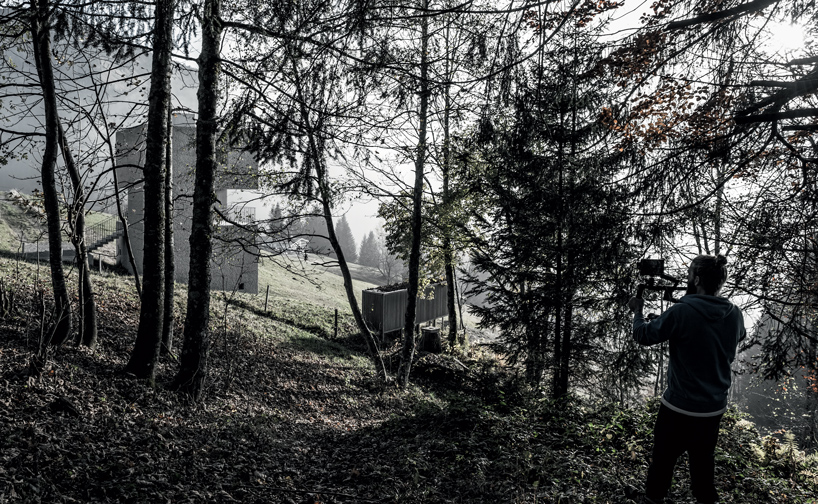 SM (continued): the second part of the installation takes a dynamic and intense cinematic approach to the mentioned projects. we have created these videos in collaboration with photographer and avantgarde-filmmaker andreas waldschuetz and sound-artist stefan hoffmeister from germany. they unconventionally and sensually re-staged our most sculptural works. the dark ambient-like soundtrack is exclusively based on recordings made on location. 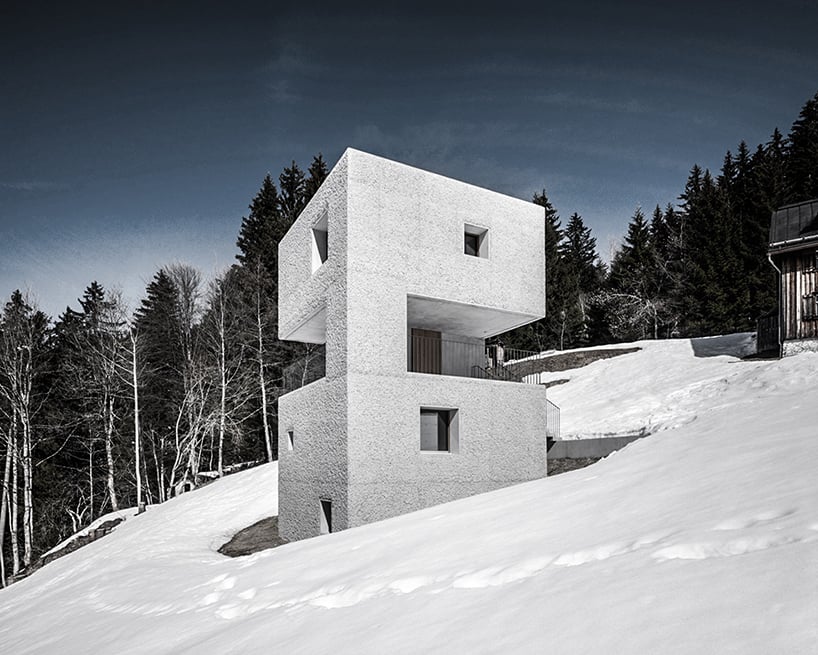 designboom: can you explain how the cube structures you exhibited at the biennale relate to the topic of infrastructure?

stefan marte: our work in the field of infrastructure might be the reason why alejandro aravena has invited us to the biennale. however, this had no effect on the design and form of our presentation at the biennale in venice. it’s just a part of the installation. the cubes are metaphors and speak of the continuous pursuit of the — in our view — one true answer to an architectural issue. at the same time, they also witness the constant threat of failure, as well as the bliss of successful moments. like a sculptor, we have to strip away each layer of hard rock. only the persistent struggle with the present reveals the truth hidden within.

SM (continued): sometimes it lies just under the surface, (see alfenz bridge), more often it is buried, under numerous, superimposed layers (see schanerloch bridge). in short: as the title of our installation ‘in search of the unexpected’ already suggests, the models are supposed to show that the essential often shows up unexpectedly. or to speak with the words of the greek philosopher heraclitus of ephesus: unless you expect the unexpected you will never find truth, for it is hard to discover and hard to attain. 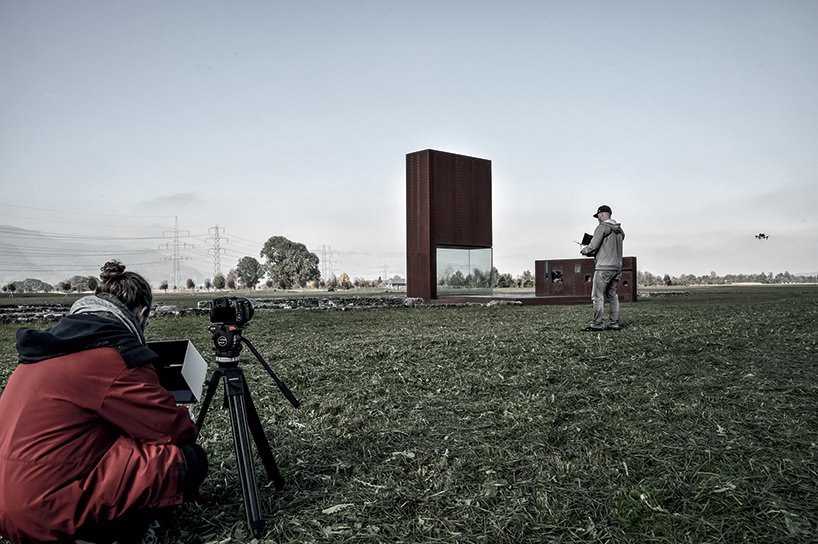 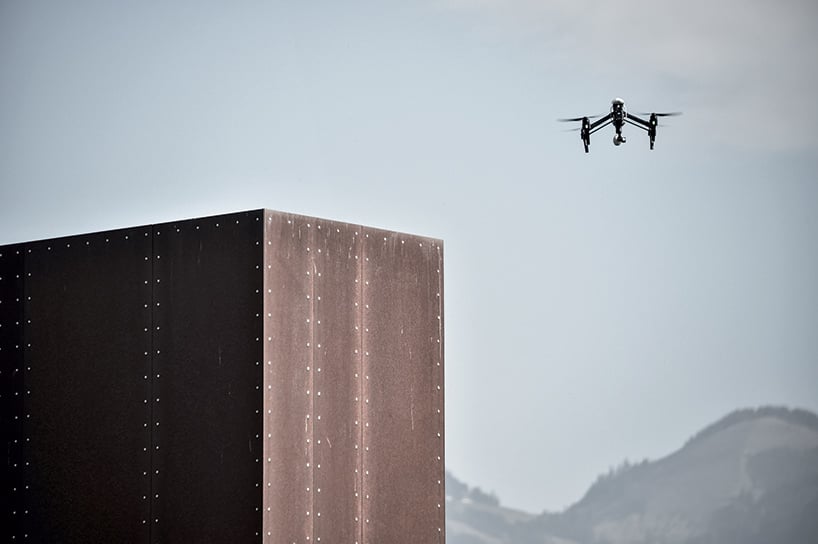 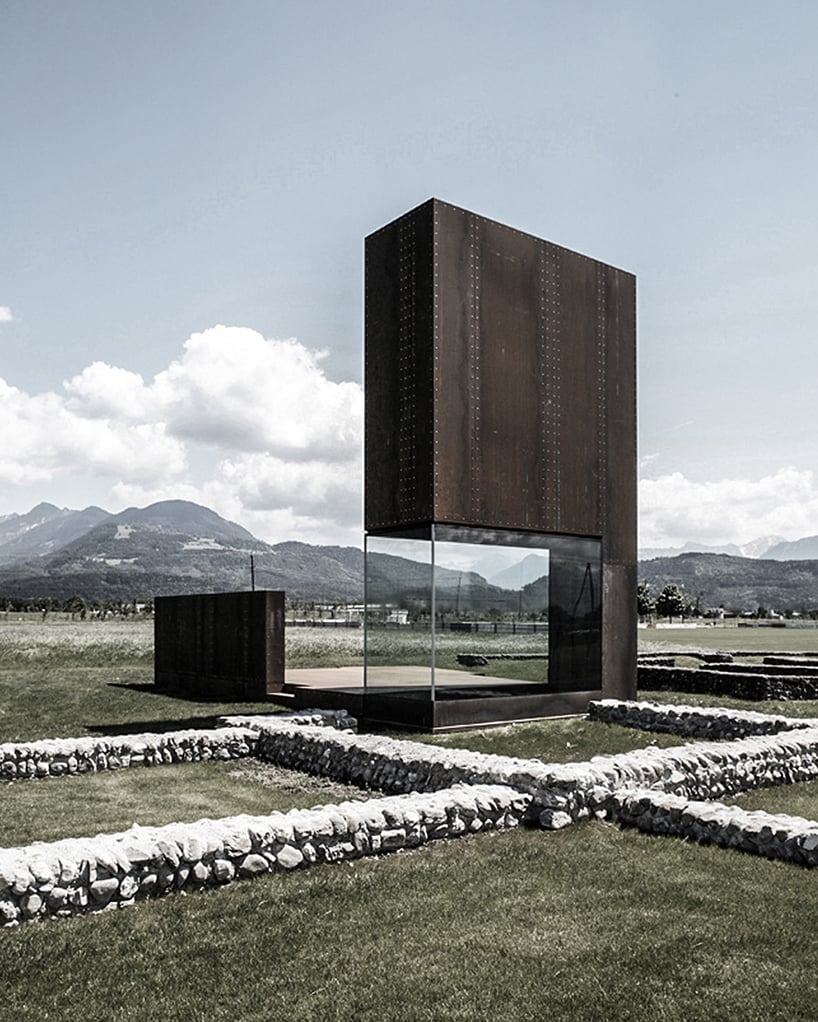 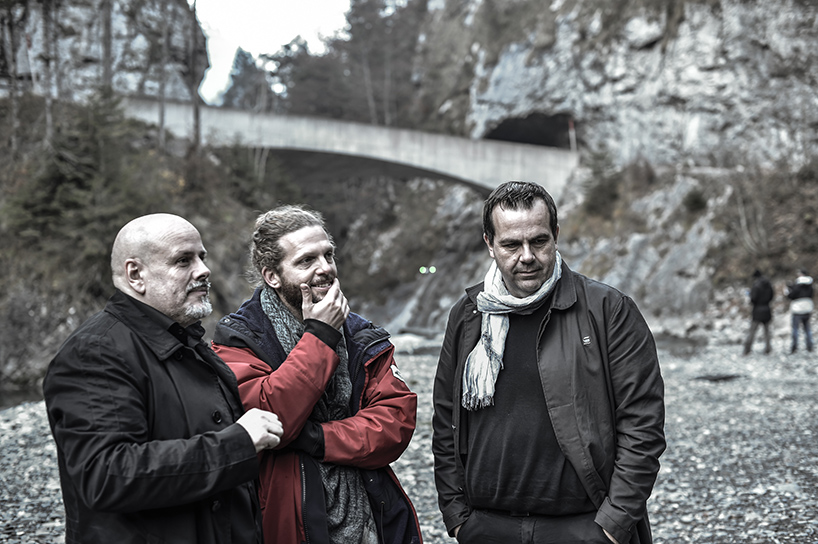 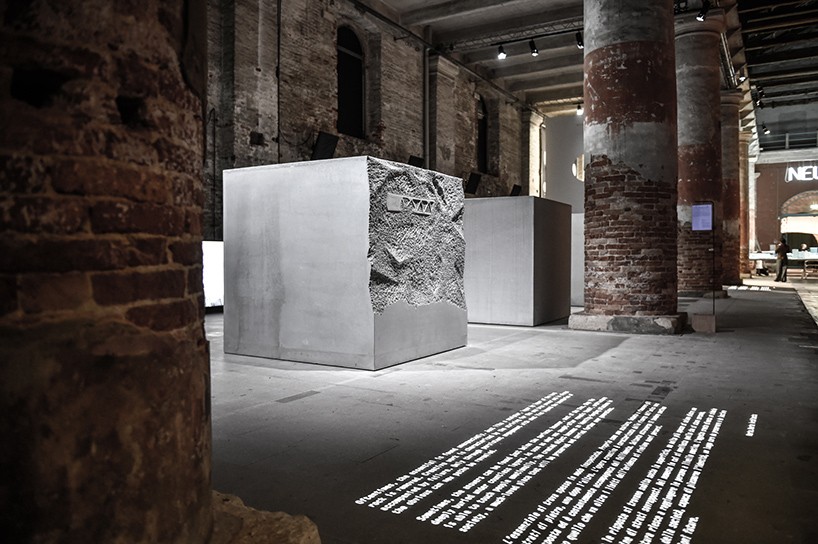 see more of ‘in search of the unexpected’, presented at the 2016 venice biennale, on designboom here
image by marte marte architects 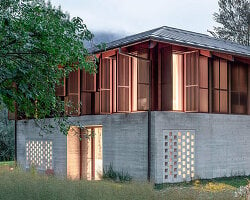 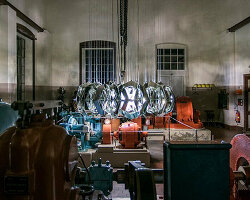 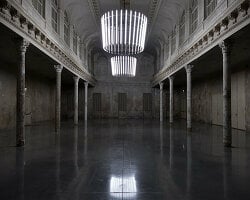 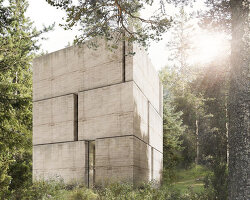 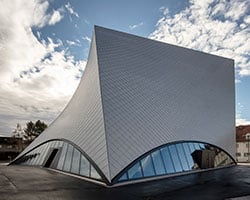 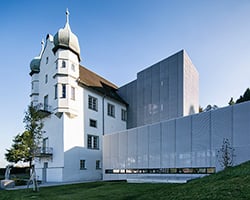 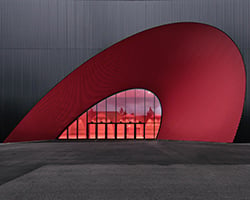