since its founding in 1984, dutch studio mecanoo has developed a reputation for designing vibrant and engaging libraries. ‘I’m known for saying that libraries are the most important public buildings — I still stand by that,’ francine houben, the firm’s creative director and founding partner, tells designboom. across the world, from birmingham to tainan, mecanoo has created bold civic spaces that respond sensitively to their specific brief and geographic location. ‘it’s not only about the design, it’s the program that needs to be tailored to the context and to the communities that it serves,’ houben continues. ‘each library has its own challenges and our task is to prepare them for unpredictable change.’

see our recent interview with the architect here, and read on to learn more about mecanoo’s library designs, including a recently opened project in new york, in the words of francine houben. 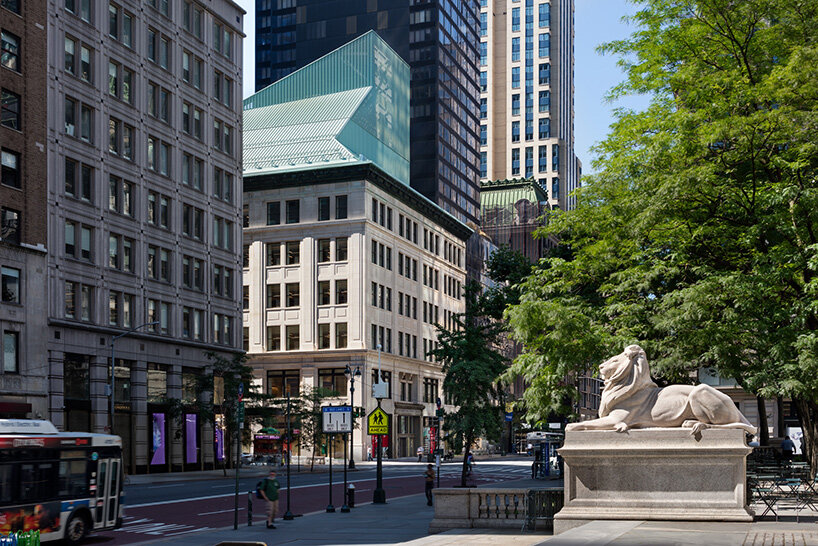 in june 2021, the new york public library officially opened the stavros niarchos foundation library (SNFL), a building that underwent a complete renovation by mecanoo in collaboration with new york-based firm beyer blinder belle. built within the 1914 shell and steel frame of the mid-manhattan library which it replaces, the building is topped with a distinctive angular roof and contains a wide rang of public amenities. ‘a central circulating library must empower the community it serves,’ says francine houben. ‘here, the community is all new yorkers. super-charged with energy, diversity and hope, america’s greatest city deserves the best that a central circulating library can be.’ 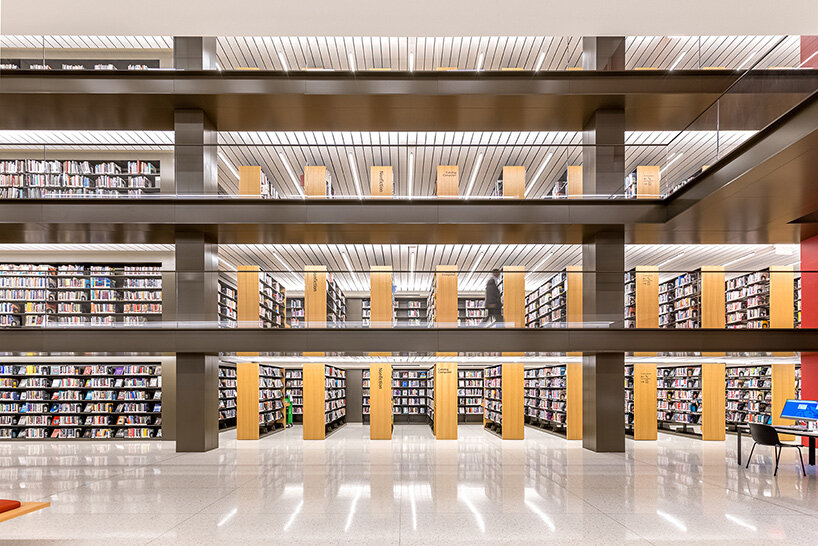 the project was designed to complement the main branch of the new york public library, which is located on the opposite side of fifth avenue, and to integrate the two locations as a midtown campus. new features at SNFL reflect this harmony between the buildings: long tables that recall the impressive scale of those in the main branch’s ‘rose main’ reading room, ceiling artwork in the ‘long room’ that echoes the neo-classical paintings set in the ceilings of the latter, and the use of classic materials including natural stone, terrazzo, and oak. 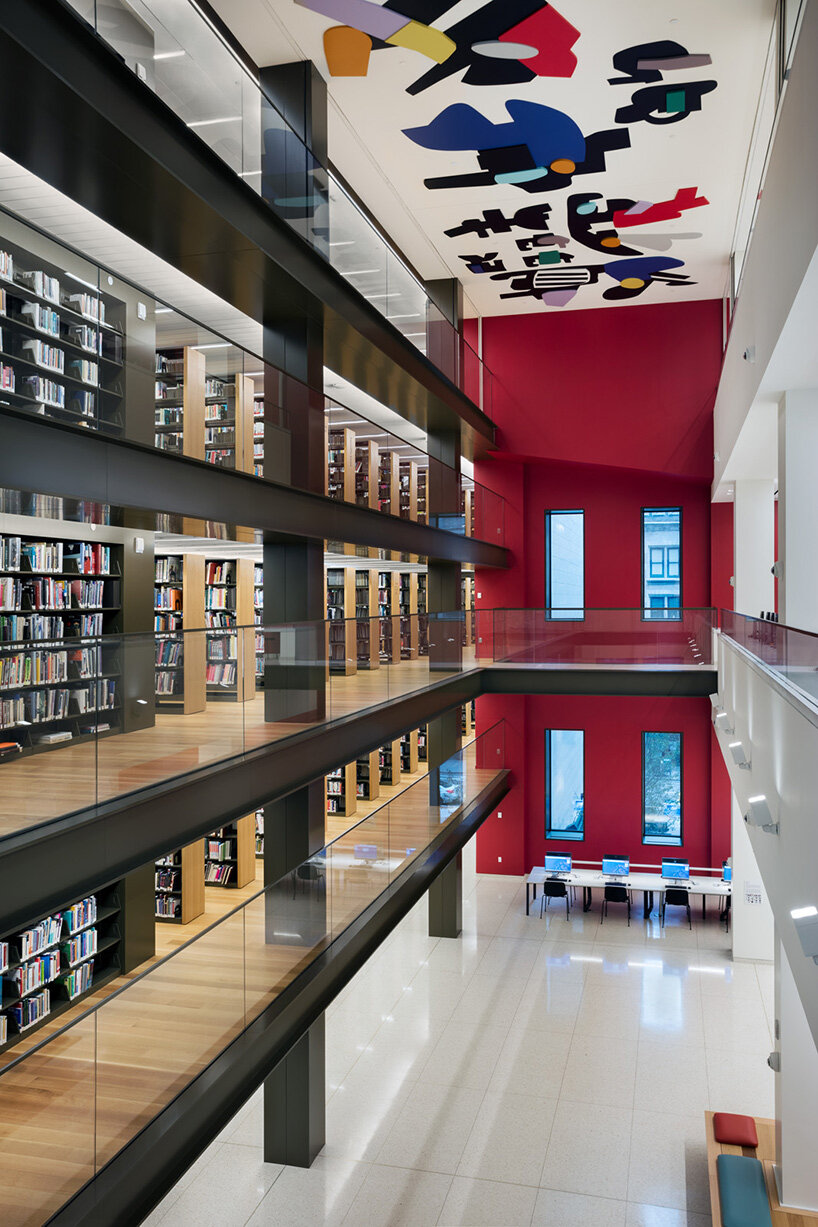 SNFL’s ground floor is arranged around an internal street that runs beneath a floating linear canopy of wood beams, from the fifth avenue entrance to the welcome desks. the heart of the library is the ‘long room’, a new space that truly brings the idea of a library into the old structure, which was originally designed as a department store. ‘we really wanted to use the columns,’ comments houben, referring to the building’s steel frame. a triple-height void has been cut into it, 9 meters (31 ft) wide and rising 26 meters (85 ft) from the second story to a vibrant new abstract ceiling artwork by hayal pozanti. 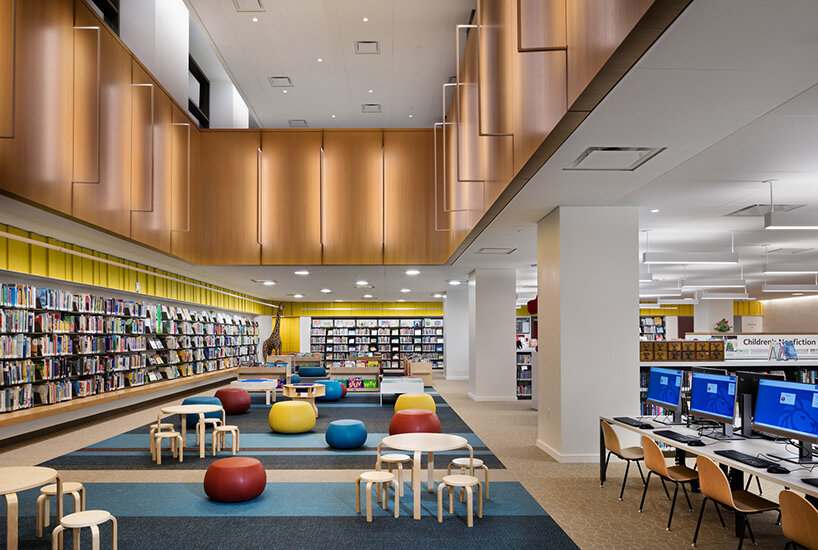 the long room’s atrium wall at the southern end is deep red, and is perforated with new windows to bring in light from a pocket park to the south. ramps gently slope to connect the different floor heights of the book stack levels and reading areas. these reading areas extend from the atrium to the fifth avenue façade, and have bespoke reading tables assembled in situ, many supported by the building’s original steel frame. above, the fifth and sixth floors host a business center and the learning center facilities. ‘SNFL’s vertical arrangement of programs improves the user experience and journey of learning,’ houben says. 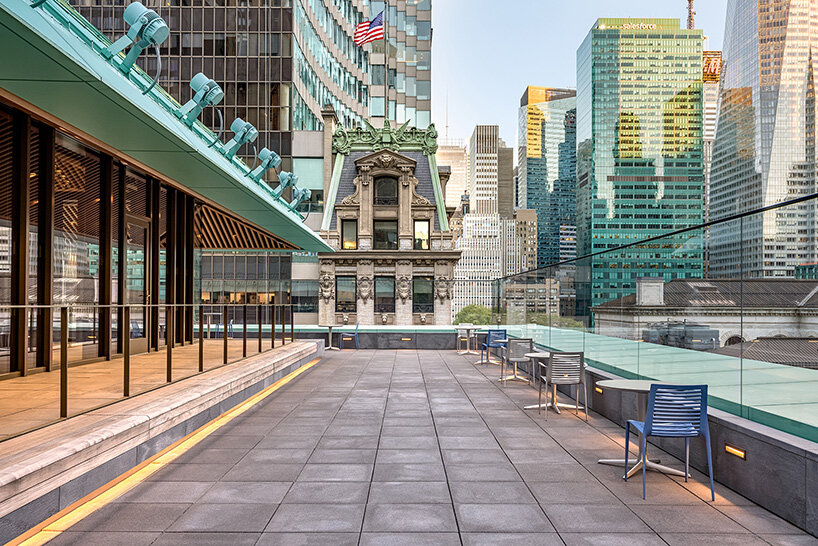 elevators and stairs continue to the seventh floor, which is built at the original building’s roof level. this new floor has pitched wood slat ceilings and contains a flexible 268-occupant conference and event center. externally, an L-shaped roof terrace includes a roof garden and an indoor café. it is manhattan’s only free, publicly-accessible roof terrace and offers sweeping views of the building’s surroundings. 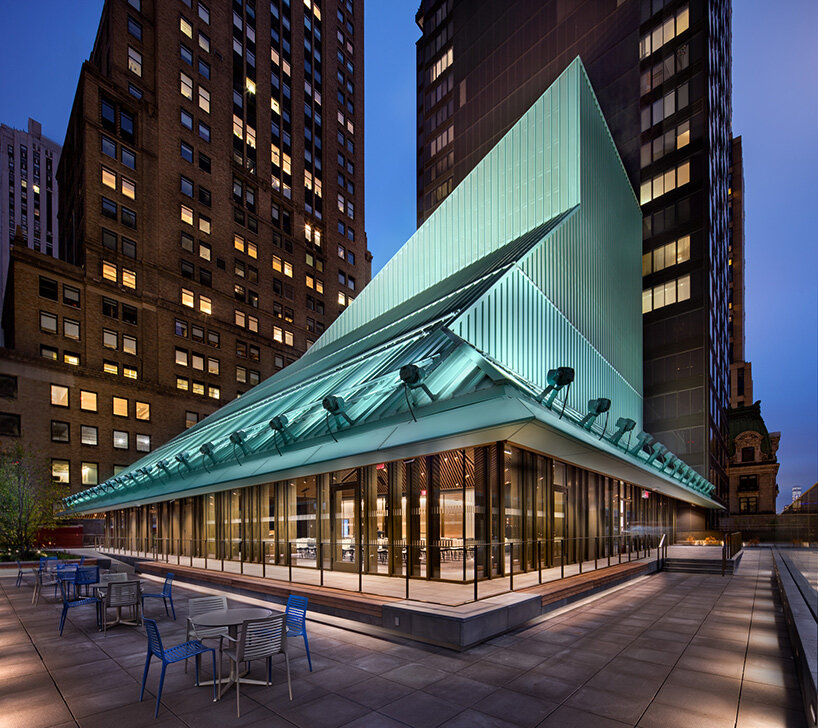 above, a dramatic new roof slopes up to cover mechanical equipment, reaching 56 meters (184 ft) above street level. its angled pitches, and a patinated copper-colored aluminum surface, are inspired by manhattan’s beaux-arts copper-clad mansard roofs — examples of which are visible from the terrace. mecanoo explains that the form is also a nod to the tapering spires of new york’s art deco skyscrapers and the faceted façades of its newer towers. 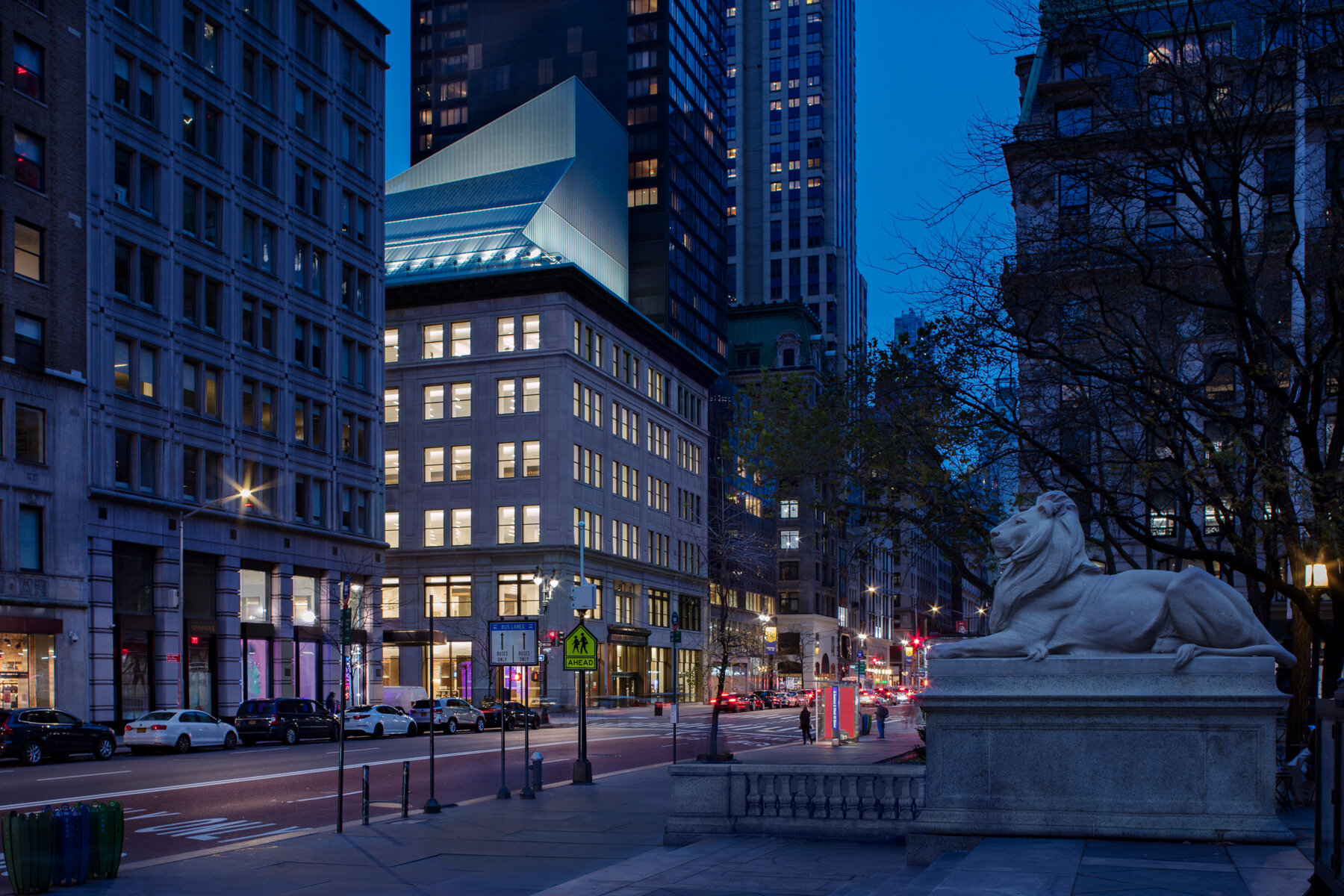 in the mid-1990s, the delft university of technology (TU delft) commissioned mecanoo to design a library that would be the heart of the university. the design’s main feature is a cone, the symbol of technical engineering, which pierces the lawn and the library, attaching them like a pushpin. daylight enters the building through climate-controlled glass façades, as well as through the cone whose base forms the focal point of the central space. ‘our first library, the library delft university of technology, remains as relevant as before — constantly evolving and changing after 20 years is a good example of what a library should be,’ francine houben tells designboom. 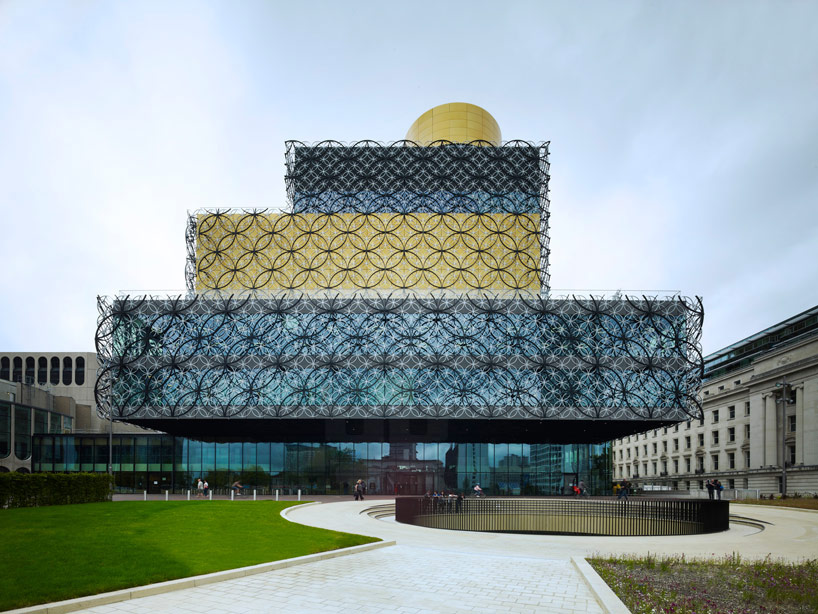 the library of birmingham was designed as a ‘people’s palace’ for the UK’s second biggest city. a cantilevered volume not only provides shelter at the entrance, but also serves as a grand balcony with a discovery garden. the circular courtyard cut out of the square in front of the library is a protected outdoor space that invites daylight deep into the building. internally, visitors move from one floor to the next through interconnected and overlapping rotundas that provide natural light and ventilation. ever-changing vistas unfold through the delicate filigree skin of interlocking circles, inspired by the city’s proud tradition of metalwork. 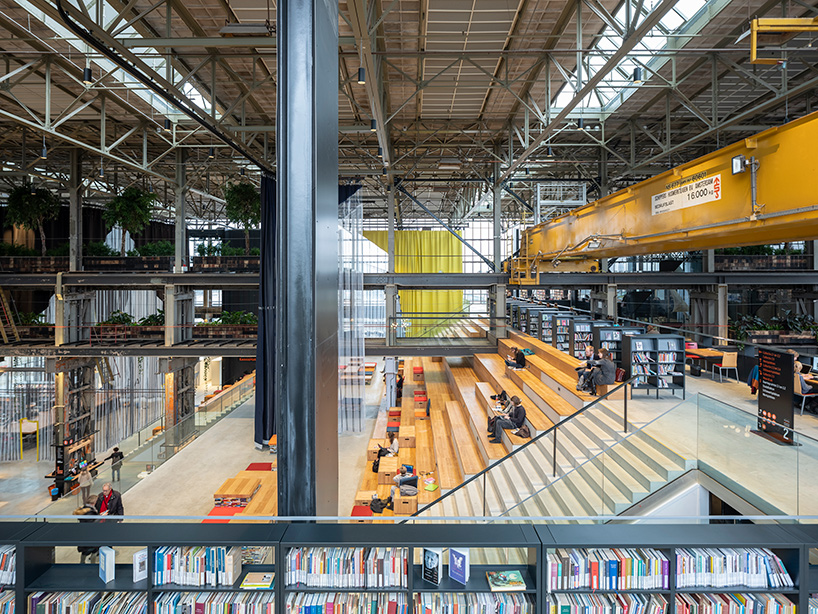 described as tilburg’s ‘new living room’, the LocHal is a converted locomotive hall that now houses a major new library for the dutch city. the project was a collaborative one that involved civic architects (lead architect), braaksma & roos architectenbureau (restoration), and inside outside/petra blaisse (interior concept and textiles). mecanoo’s playful and innovative interior design for the library generates striking contrasts by combining characteristic historical elements with new oak and steel additions. meanwhile, a color palette of reds and oranges contributes to the warm and inviting atmosphere. 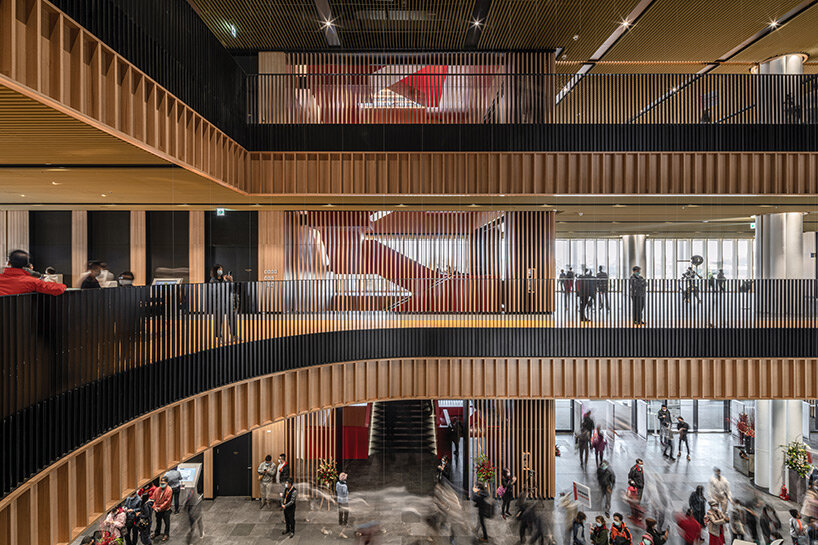 mecanoo teamed up with MAYU architects to complete a public library in tainan — taiwan’s oldest city. the design references the history of the region, which comprises remnants of maritime trade with europe from the 17th century, the chinese ming dynasty, and japanese settlements from the beginning of the 20th century. the library is now home to the city’s cultural heritage, modern art, music, films, and over a million books — including more than 16,000 from the japanese occupation period. 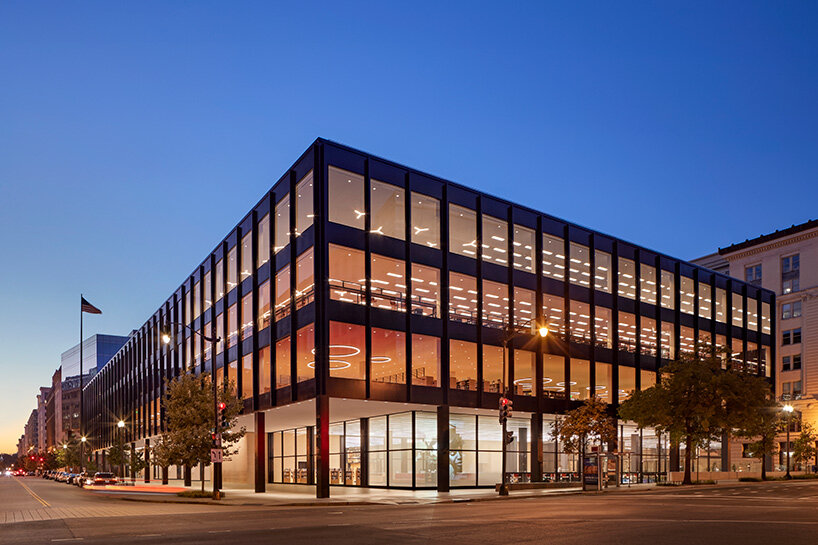 working with OTJ architects, mecanoo was responsible for renovating the martin luther king jr. memorial library in washington, D.C. — a landmark building designed by mies van der rohe. the team worked to transform the main entrance and the two adjacent cores into focal points by making them more transparent, and by designing new spacious public stairwells. this creates a clear and welcoming entrance area, making the facility significantly more legible for visitors. the great hall, a centralized area designated for cultural performances and informal events, now forms the beating heart of the library. ‘a central objective of the new design is to highlight the library’s social gathering purpose and its strong presence as a social landmark in the city,’ houben shares with designboom. ‘the design approach balances the very different legacies of mies van der rohe and dr. king.’ earlier this year, mecanoo was selected to design the new ‘macau central library’ adjacent to tap seac square, a UNESCO world heritage site in the city’s historical center. mecanoo says that the adjacent square will become an integral part of the scheme, creating an active public realm that will encourage visitors to use all of the new library’s amenities. the façade facing this square filters light and ensures a controlled indoor climate, while a play of shadow is projected onto the library’s floor and walls. the uniform skin, which references the bookshelves found within, wraps the building and opens up like a paper page in a welcoming gesture at the main entrance.