metek architecture has envisioned a mixed-use complex to be situated in the 19th arrondissement of paris. comprising of 31 social housing units and 7 artist studios, the new project intends to reinvent the urban courtyard by placing it at the heart of the scheme. the design also intends to make a connection with the historic buildings while still announcing a contemporary insertion thanks to the bold copper-gold cladding. 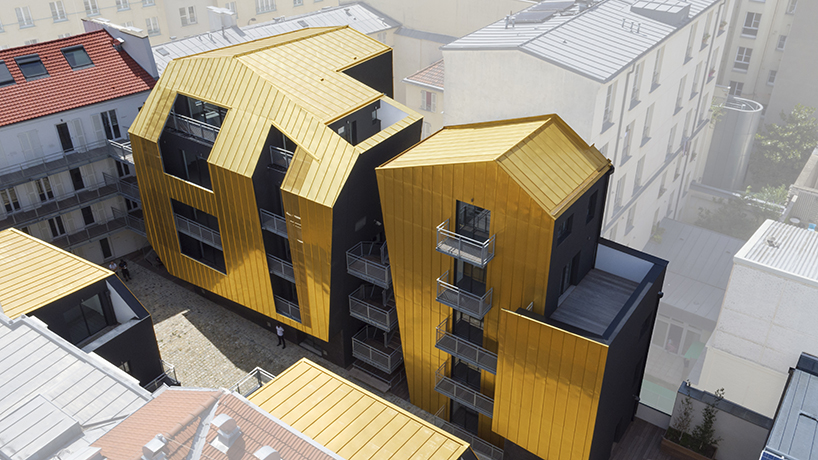 all images courtesy of metek architecture

the project by metek is designed to be discreet and is in fact barely visible from the street. upon entering, residents are greeted by a generously-sized shared outdoor courtyard that forms the center of the plan. this space aims to encourage social interaction between neighbors while allowing natural light to break through the mass of buildings. the new layout also provides physical continuity between the courtyards of the adjacent plots. 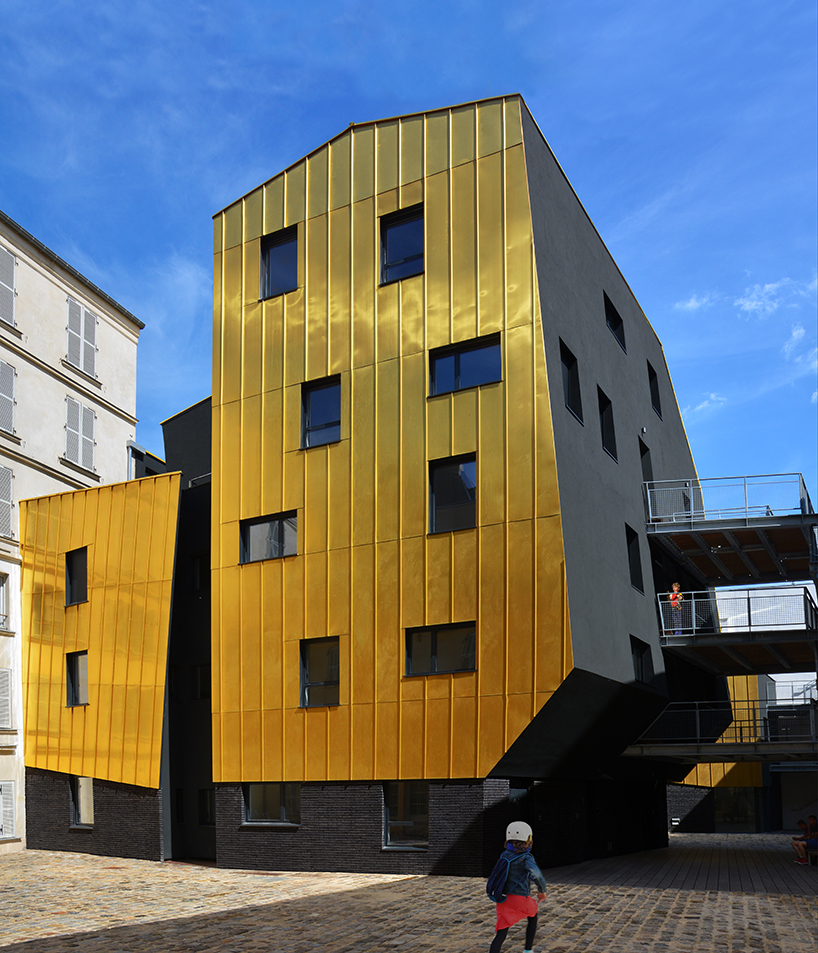 the central courtyard is conceived as a small pedestrian street that extends into an old printshop through large entrance doors. this small paved street, which takes up the typology of the parisian villas, serves all the buildings on the ground floor. between the buildings, there is a system of terraces, loggias, corridors and balconies in timber decking. the change of material marks a threshold: the first step before returning home. 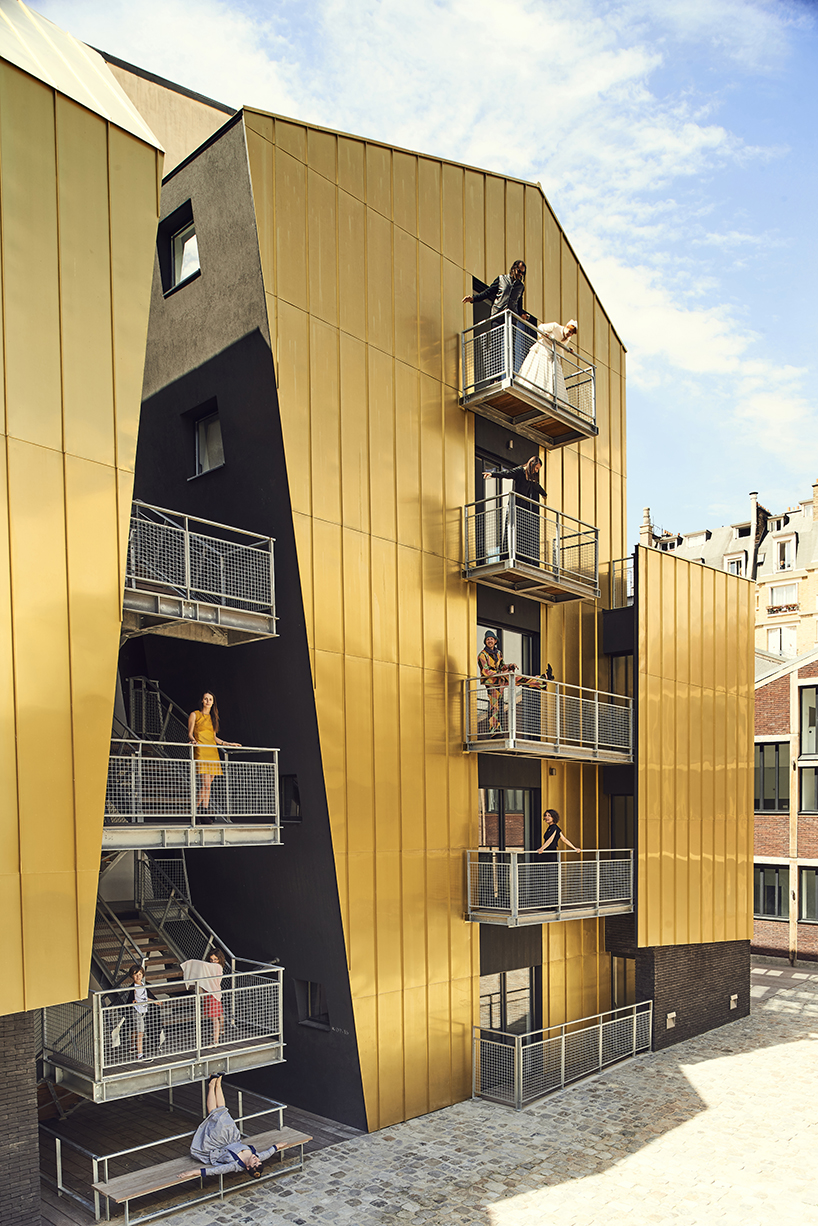 the new roofs are designed in scale and pitch to form a relationship with the existing buildings. however, to create a contemporary insertion, the new complex is clad in an alloy of copper and aluminium called copper gold. these standing seam panels continue to the roof, following the traditional use of zinc in paris. the roof is also home to photovoltaic and solar panels to provide green energy and domestic hot water. the project also boasts a powerpipe system to provide heat recovery on used water. 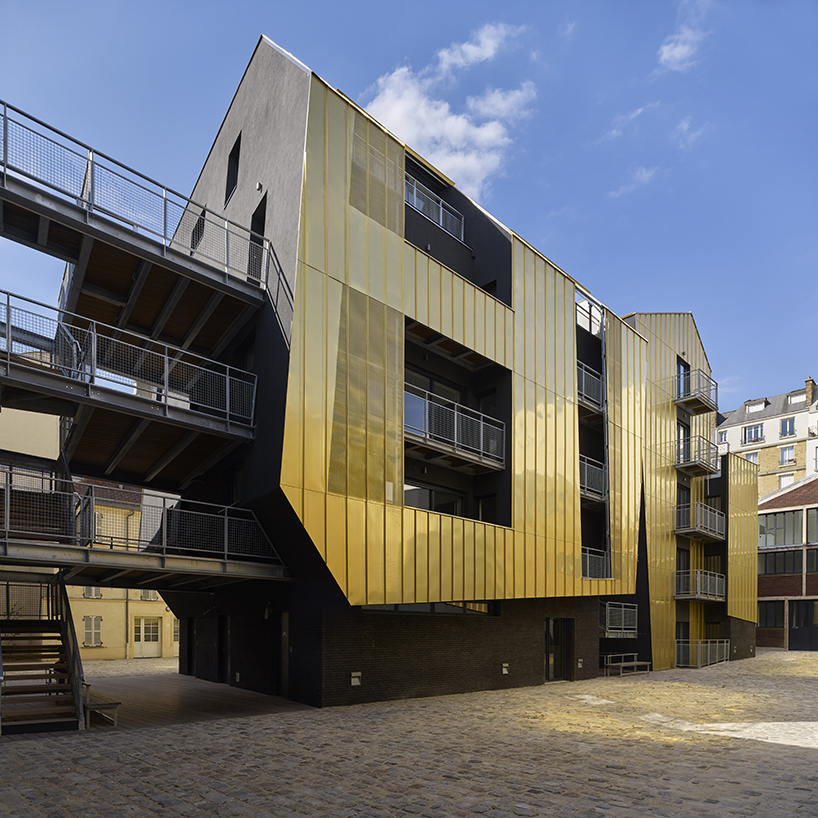 in addition to the new intervention, the project also includes the restructuring of a ‘faubourien’ building on the front elevation and an old printshop to the rear. the facade of the street facing building has been left unchanged, but on the courtyard side, the windows have been lowered and a system of balconies and exterior passageways have been added. the facade of the old printshop has been completely reconstructed according to historical documents but with a second partial floor created. inside, a shared space to serve the homes and workshops is provided. 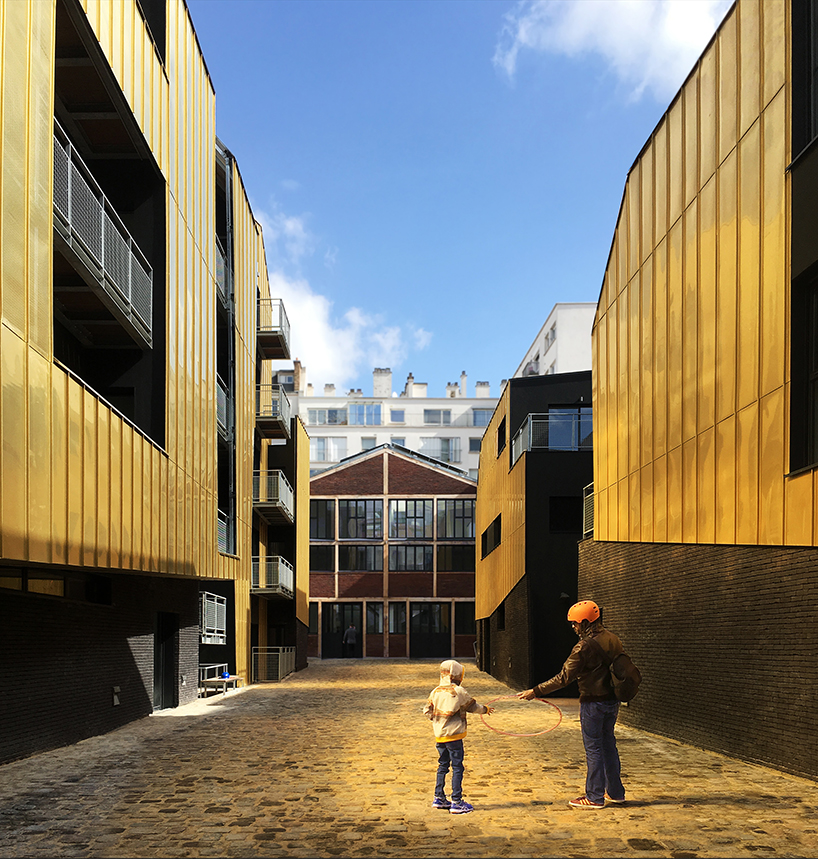 the new complex also focuses on the ‘theater of life’ with the design of the balconies, allowing residents to be in front of the central courtyard. it is also a simple way for them to greet others from home or from the half-steps of the stairs. the balconies, terraces, loggias and passageways also intend to form a connection with the outdoors, offering an extension of the indoor living space. 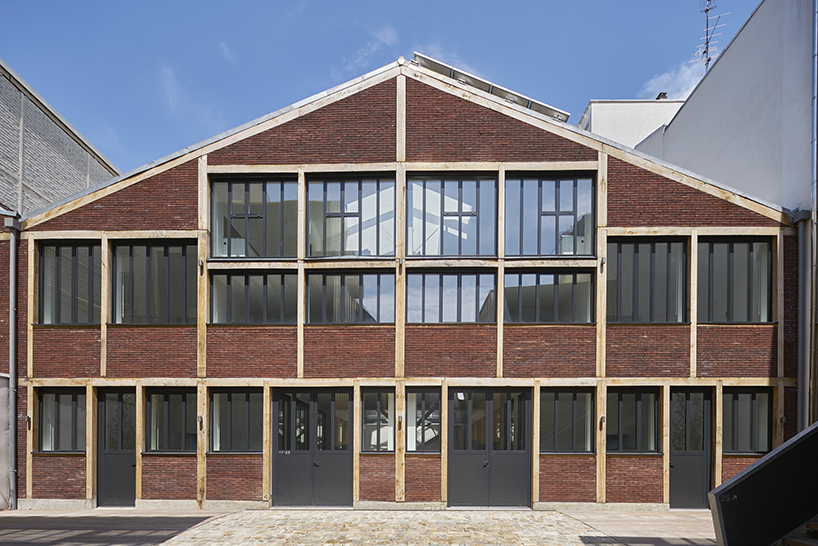 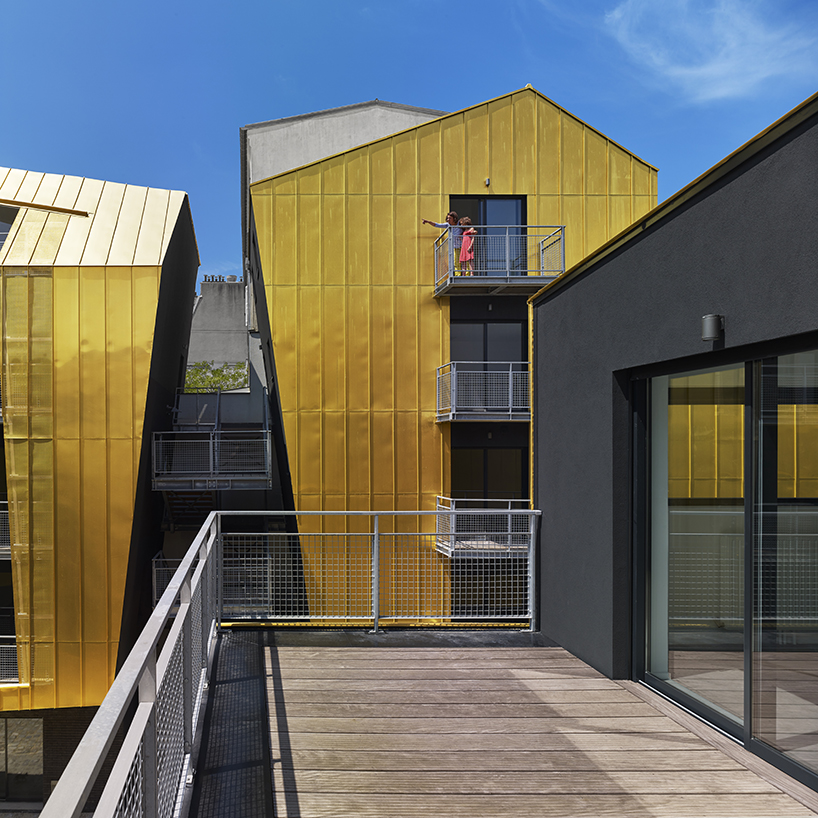 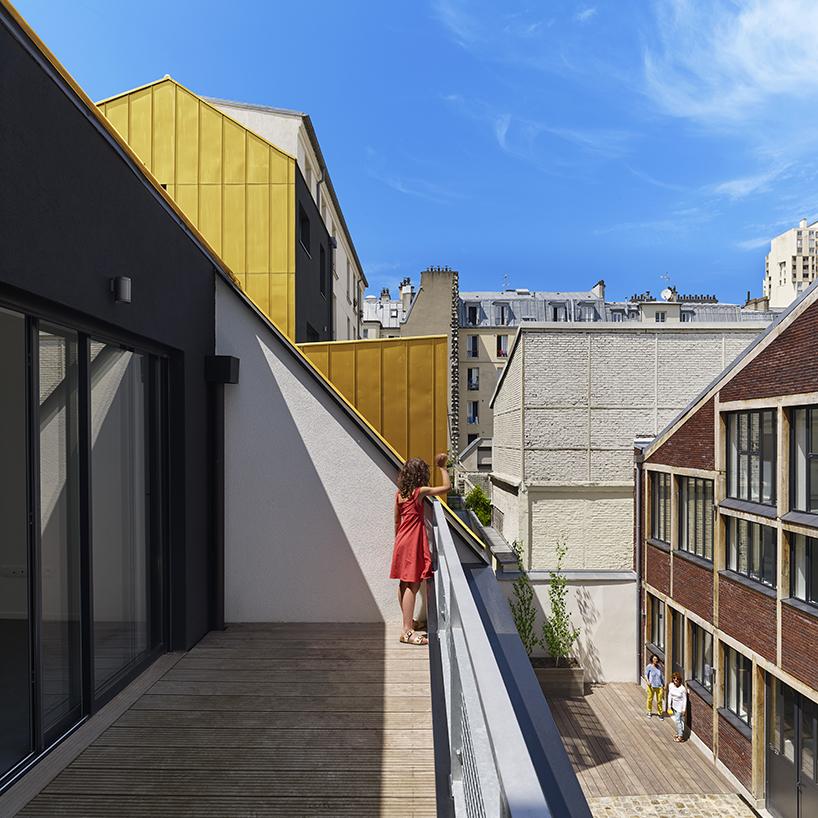 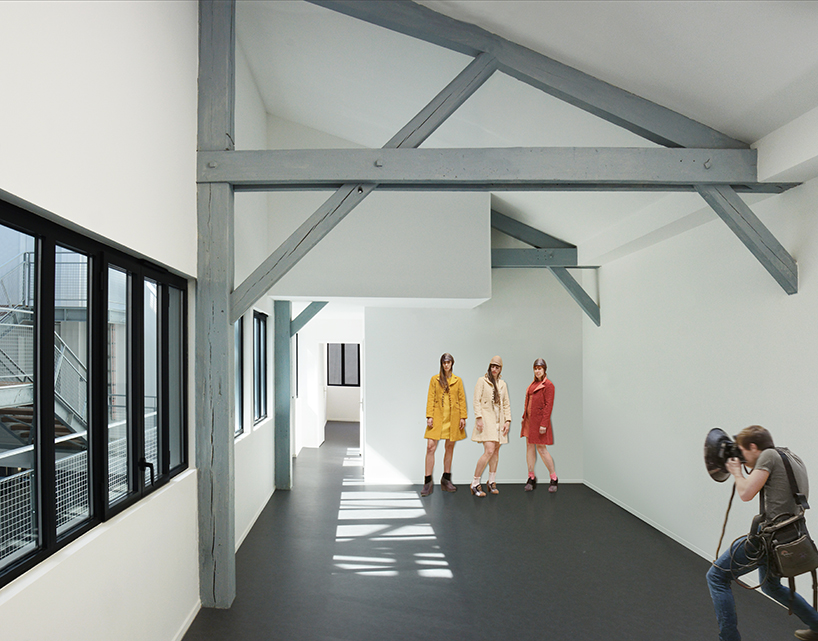 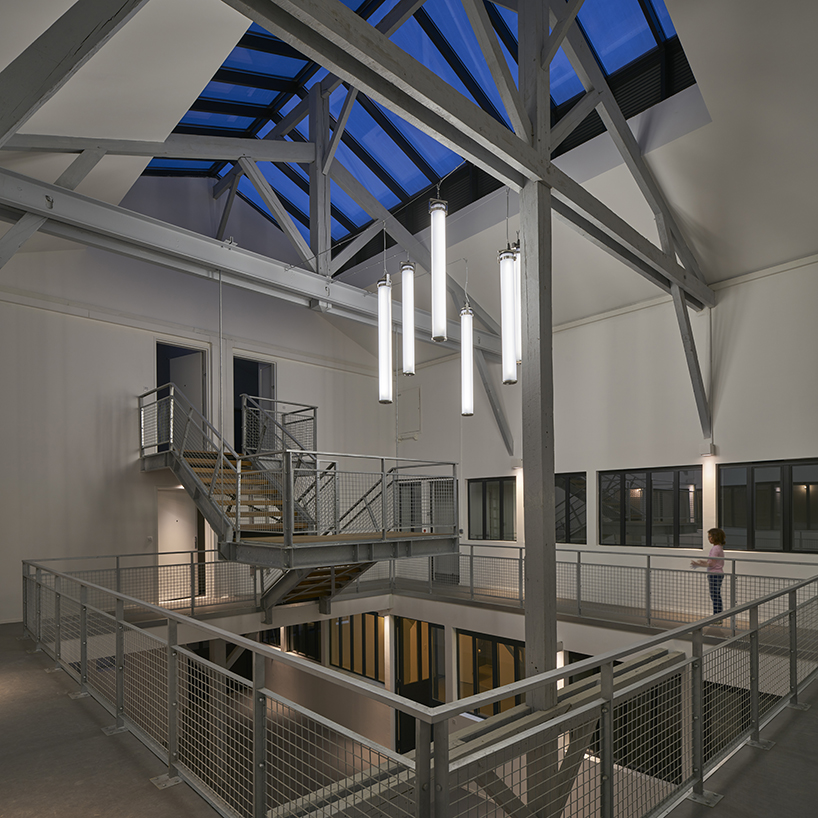 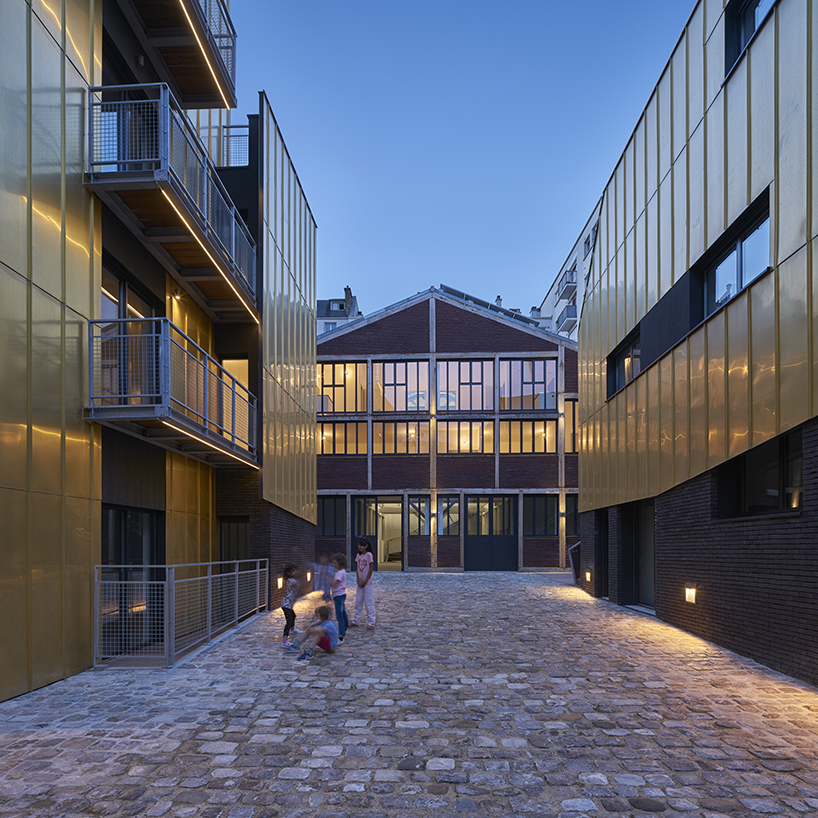 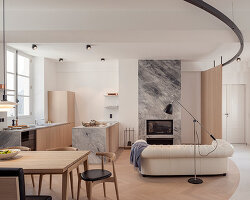