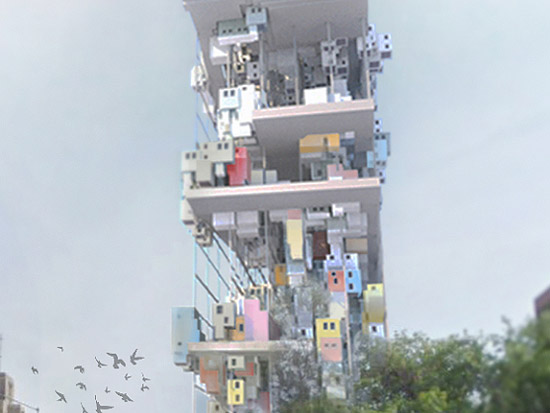 preserving the character of mexico city – specifically its propensity for change, the mosaic nature of its urban character, and the traditional barrio – this tower is a frame-work for a new vertical city. containing roadways, open plazas and parks; the nature and function of the ‘tower’ is to provide unlimited potential for new urban and vertical environment. by respecting the communal aspects of the city while allowing growth, this new urban frame-work challenges the frozen and static quality of current tower typology.

mexico city’s larger culture is a mosaic-like composition of many different cultures. its heritage and histories are diverse, mixed and marked by constant evolution and change. on a smaller scale, the heart of mexican culture is community and family, which are most strongly influenced by the traditional barrio and street- being both a physical connection between everyone and a place of interaction. massive air pollution, lack of clean water and over population, which has caused the disappearance of public space, are major problems mexico faces. 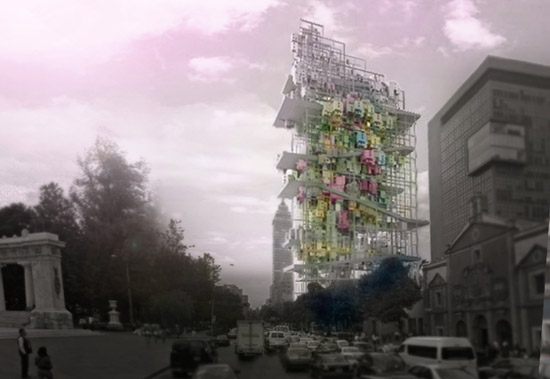 the ‘housing tower’ must both address the larger issues of identity and the smaller, more personal-scale issues of dwelling and living. the existing tower typology where inhabitants are isolated and segregated is contradictory to mexico’s larger identity and the culture of itspeople. in the contemporary tower, the barrio and street are non-existent therefore horizontal and vertical community is lost. furthermore, the tower’s meaning exists only as a foreign, singular and predefined object, which is opposite to the diverse nature of mexico. 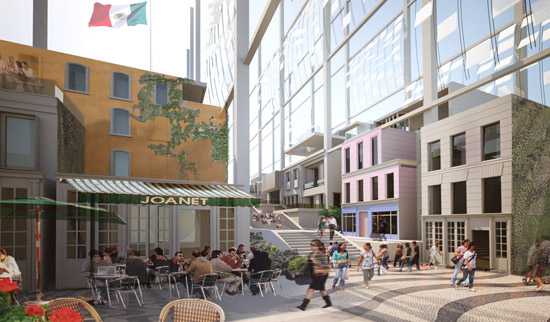 they therefore approached this prototypical tower design as an urban design solution. key components of mexico’s urban fabric are retained and shifted vertically into a new three-dimensional urban organizational grid, becoming the new framework for mexico city. the grid framework is split into six massive moment frames which act as shear walls. this allows visual and circulatory freedom and sunlight to reach deep into the tower. the streets span the gaps between the framesmaking the whole system a rigid structure. 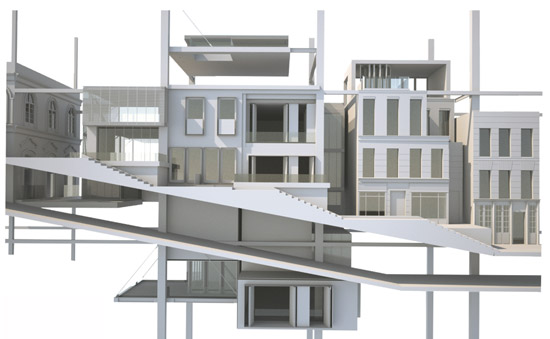 this structural framework design allows the architecture within the tower to develop over time, creating a dynamic composition of vertical neighborhoods that grow around and into one another. sub-public and private spaces evolve organically, creating complex urban spaces similar to those of historic mexico. the essence of mexican community is preserved in the urban spaces of the tower, while its propensity for change continues. its identity and color fills the tower creating a vertical timeline of mexico’s culture and histories. the meaning of the tower is a living being that breathes in the city and is truly defined by mexican culture and people. 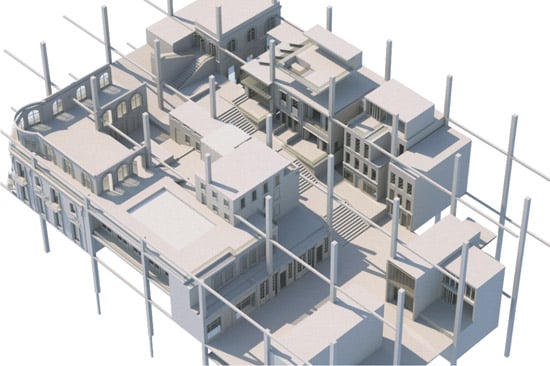 the street is continued up from the ground plane, weaving throughout the entire tower literally connecting all the residents and the different barrios. the street is then sloped, shifted, and expanded in response to sunlight, wind, adjacencies and population density. main public roads are widened for commercial program and connect to the major parks and plazas. zoned like a city, the tower follows proper ratios of built, to open, to green space. based upon population density and circulation factors, the tower has one main plaza/theater and one main parque. a new vertical ‘metro’ of elevators connects the main social spaces and links directly to the metro line beneath the site allowing inhabitants to quickly travel to the various barrios in the tower and the rest of the city. 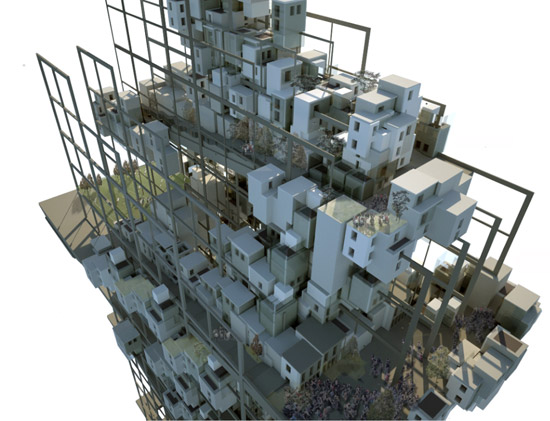 being placed throughout mexico, the tower acts as a massive support system, an urban lung, filtering the water it gathers and cleaning the air around it.

to guarantee a good quality of neighborhood life a ‘vertical zoning code; is developed. prescribed guidelines create a growth algorithm; allowing for proper ratios of built, to green, to void space to be preserved. these rules encourage neighborhoods to grow in a non-linearfashion, creating intimate settings for which people to reside. the neighborhood is organized yet macrobiotic, creating fascinating spatial situations never before seen in the urban context. 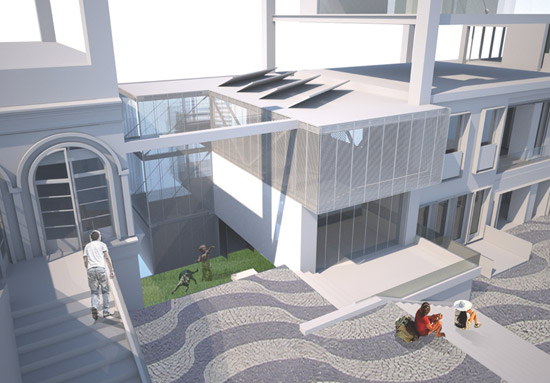 social interaction now happens both above and below the ground plane. ranging from the more personal and immediate, this interaction creates an identification with a broader community by means of visual consciousness of neighborhoods suspended in the vertical city. levels above the street serve as the most public part of the new mexican dwelling and the underside acts as a more private retreat. 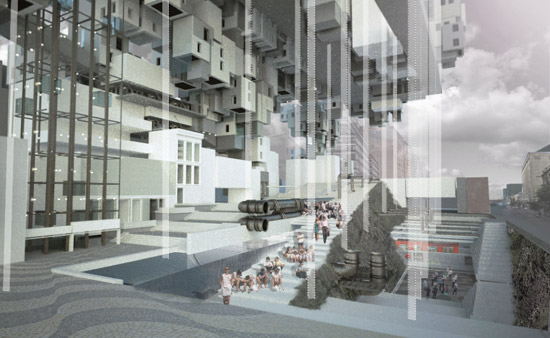 new housing forms emerge: totally three dimensional objects with infinite formal and spatial possibilities. each building is self-structural and is built into the larger super-structure, a non-modular system allows neighborhoods to develop with a richness and diversity reminiscent of the larger mexico city context. no longer a foreign living container, the tower is a dynamic place consisting of plazas, parks, and offshoots that work together to create a living and intriguing community habitat. 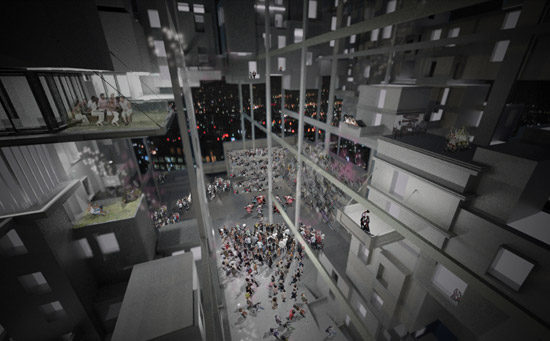 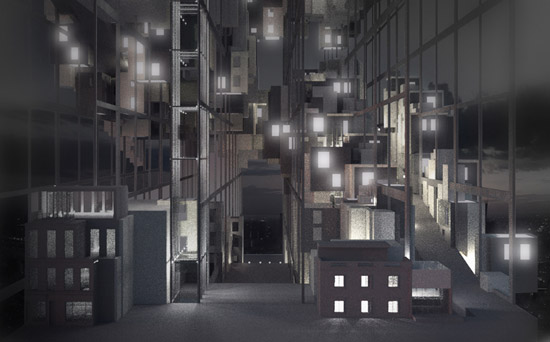 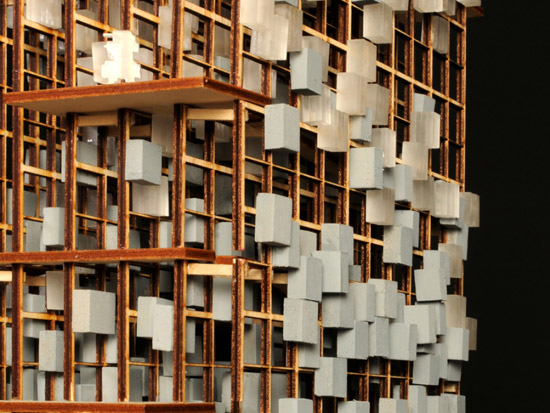 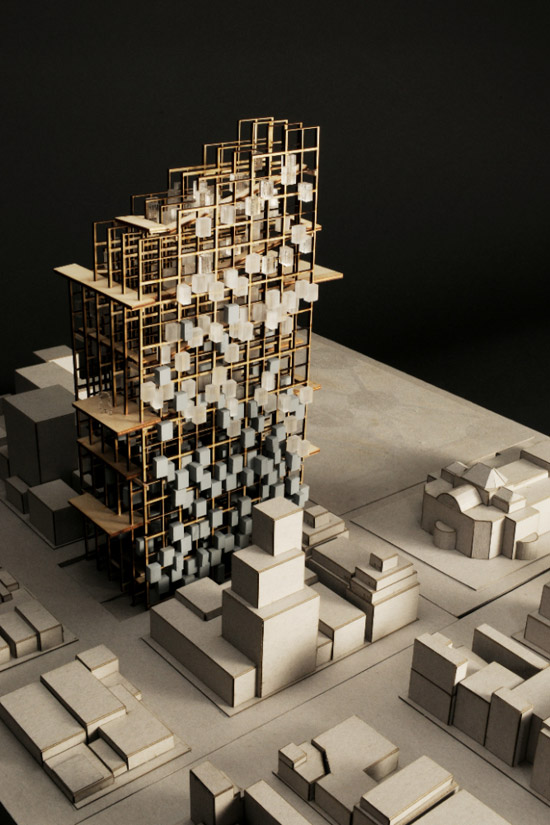 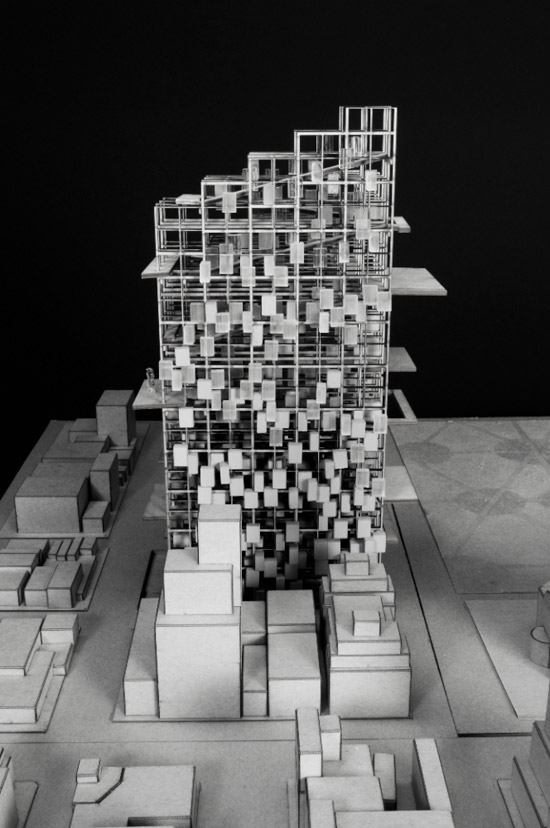 mexico city – once the tower is constucted

the tower filtering clean air through the city 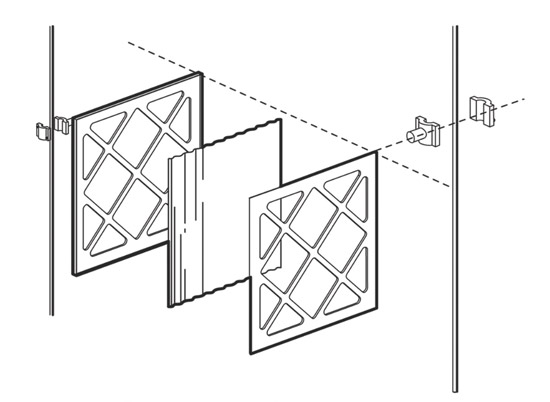 how houses can be placed within the tower

how houses can be placed within the tower

sections of the tower 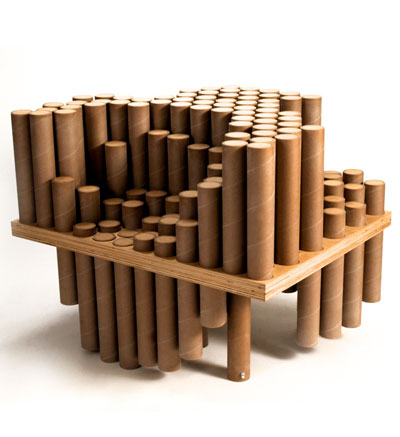