located on a quiet street in milan, the first thing you notice before ringing the doorbell of michele de lucchi’s studio AMDL circle is graffiti in front of the street that reads ‘di vita…’ (of life…). I photographed it, took a deep breath and entered the studio. my first impression encompassed a warm feeling. it could’ve been because of the dim lighting, the museum-like atmosphere, or the comforting smell of wood. either way, I was stepping into the sacred space of one of the people I admire the most — italian master michele de lucchi.

I was welcomed by his staff, who showed me around the four floors of the studio: a wood workshop, a lovely outside area where the team was having a meeting, the open space floor where they work, a sunken tearoom and then de lucchi’s office. while I waited for him to come, I had the chance to witness the arrangement of objects that make up his personal space. the warm feeling continued all the way to his studio, where his wood sculptures, together with some hand-picked rocks, notebooks and magazines, gave me an idea of what this encounter was going to be like — an unforgettable one. and even before meeting him, I was already speechless, which is a rare occurrence. 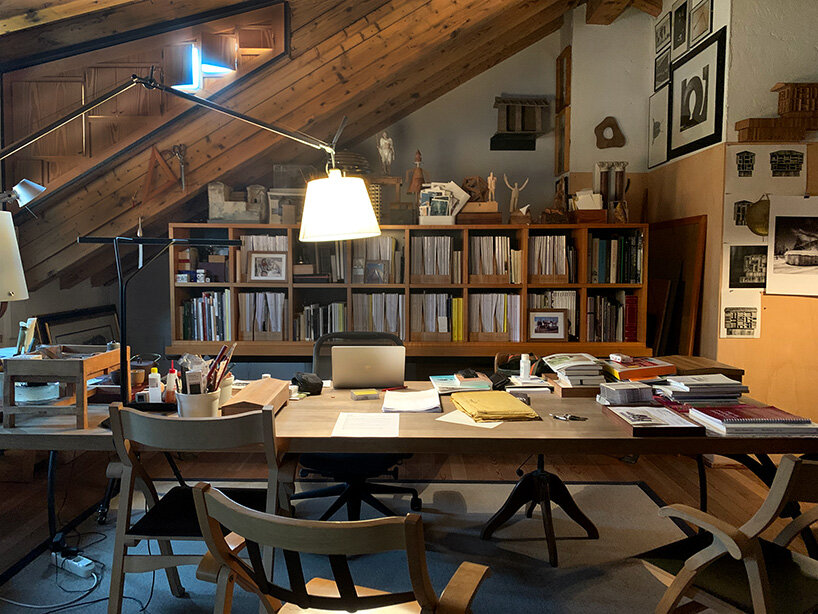 de lucchi came in, and while I mumbled some words in italian, he started talking, making sure that space I had reserved for nervousness was occupied immediately by his wise words. I was there to discuss his participation at the venice architecture biennale 2021 (read more here) where he took care of the venice pavilion. I had prepared a series of questions but it’s difficult not to forget about them when you have de lucchi’s mind flowing freely, generously sharing his point of view, his intelligence, his creativity and all his sensitivity. the conversation flowed as if we were two old friends, or even better, like a mentor and his student. and you have to believe me when I say it’s impossible not to feel humble when he’s around. I had never encountered so much humanity in just one human being, and it had been a while since I stepped out of a place feeling full of hope. 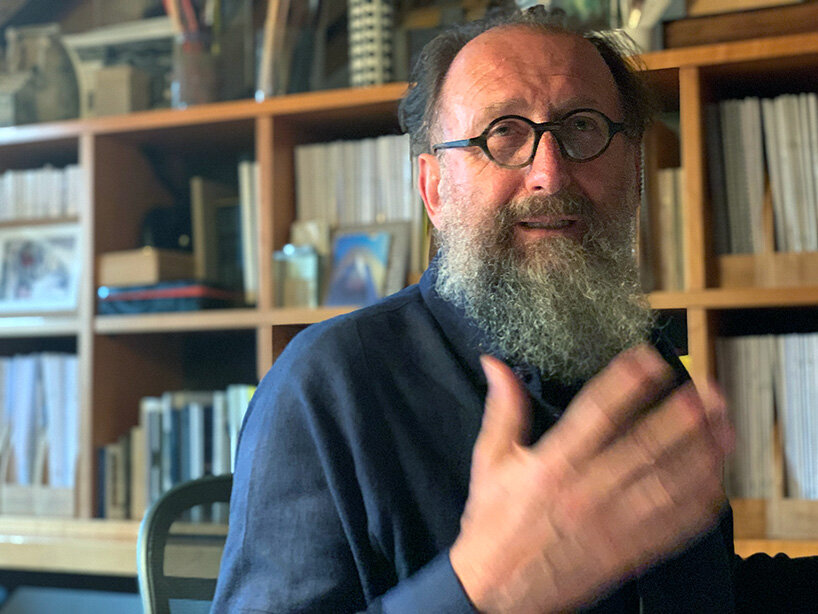 michele de lucchi needs no introduction. born in 1951 in ferrara, italy, he studied architecture in florence and was part of italy’s period of radical and experimental architecture and design, acting as a notable figure in movements like cavart, alchimia and memphis. throughout his longstanding career, he has designed for the best italian and european companies, including artemide, hermès, vitra, and alessi among others. in the architecture realm he has created and renovated many buildings, including pavilions and railway stations. not to mention the exhibitions he has designed, as well as being the editor of domus magazine in 2018.

today, de lucchi continues to lead his studio AMDL circle with davide angeli, the deputy studio director. together they reinforce their vision towards humanistic architecture and design. during my visit, I sat down with both of them in an interview you can read below. 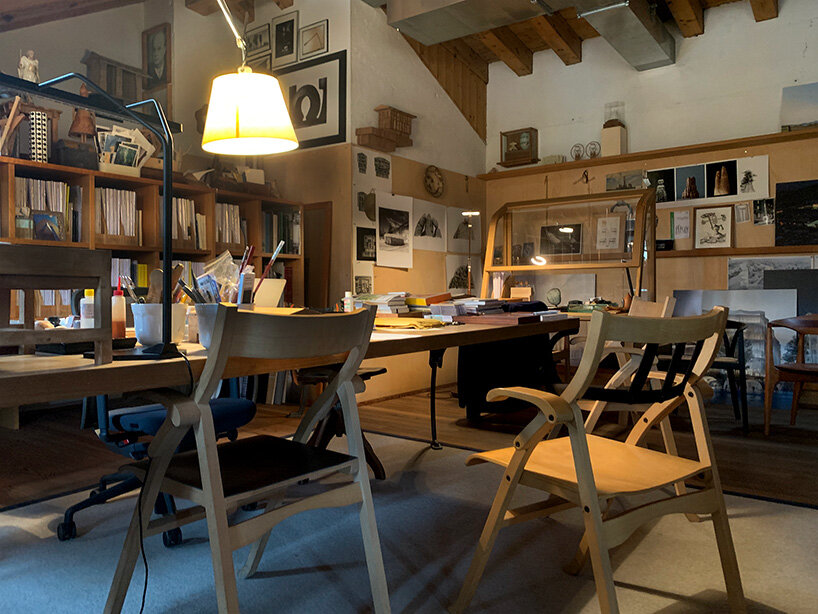 DEBSIGNBOOM (DB): can you start by telling us why you originally wanted to be an architect/designer/artist?

MICHELE DE LUCCHI (MDL): being an architect is a combination of many different jobs. same goes for the ways one understands and delves into architecture and the environment. there are, in fact, different ways of understanding the positive impact that architecture can have on contemporary society. for this very reason I always think of myself as an architect, a designer and an artist; I also write, I take photographs, I teach. in my opinion, all these activities have just one true aim: to create a better environment and to enhance life.

there is a concept, part biological anthropological, and neurological, called homeostasis which states that men, as all other living species, develop their personality re-adapting their behaviors in order to guarantee, not only their own survival, but also the one of their own kind. to me, this means that in everything we do, we try to react and to fight our personal and cultural insecurities and uncertainties. architecture, design, the arts, have all the same purpose: to enhance our well-being, both as individuals and as parts of society. 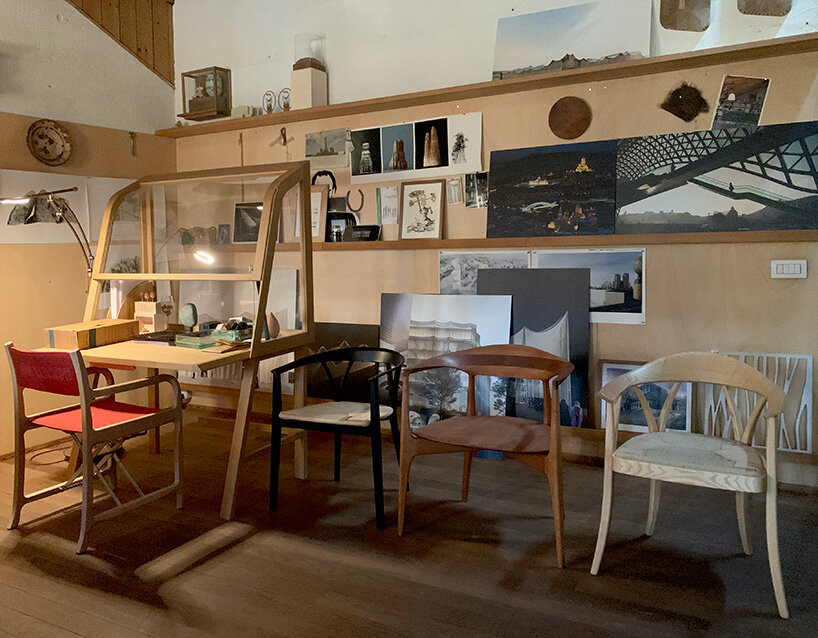 DB: considering current issues such as climate change and sustainability, how do you see the traditional role of the architect changing?

DAVIDE ANGELI (DA): in my opinion, nowadays, an architect is considered less as of a ‘soloist’, but more as a professional who is able to interpret the constant environmental changes. architecture is more and more influenced by other disciplines, both scientific – relating to the buildings sustainability issues – and humanistic, to analyze the individual perceptions of an environment. 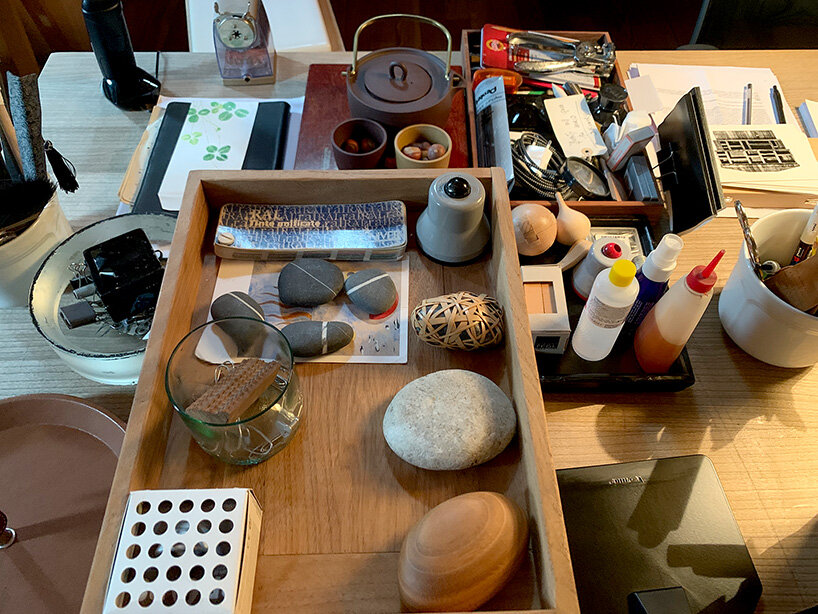 DB: as you are also involved in architectural education, do you see shift in attitudes from 10-20 years ago to the students you are now teaching?

MDL: in the past, the only tools we could use to practice architecture and design were pencils, paper and pens. nowadays there are sophisticated digital programs able to support our practice. this very thing was unimaginable a while ago.
there is another consistent change: our approach to sustainability. in 1969, when I started to study architecture, we were concerned about the ecological side of a project as the esthetical preservation of the natural environment we were working on. today there are no alternatives: sustainability becomes the project itself, because sustainability is the only possible future. even within our circle, projects are no longer thought as spaces, designs, constructions, but they become inspirations for future sustainable behaviors.

DA: there definitely is increasing attention to sustainability issues: nowadays, for my students, this is the starting point of all projects. sustainability has become essential, a fundamental issue that can no longer be ignored. I’ve noticed an instinctive change of attitude in the younger generation of students, especially in the under 21, who are extremely sensitive to this contemporary matter. 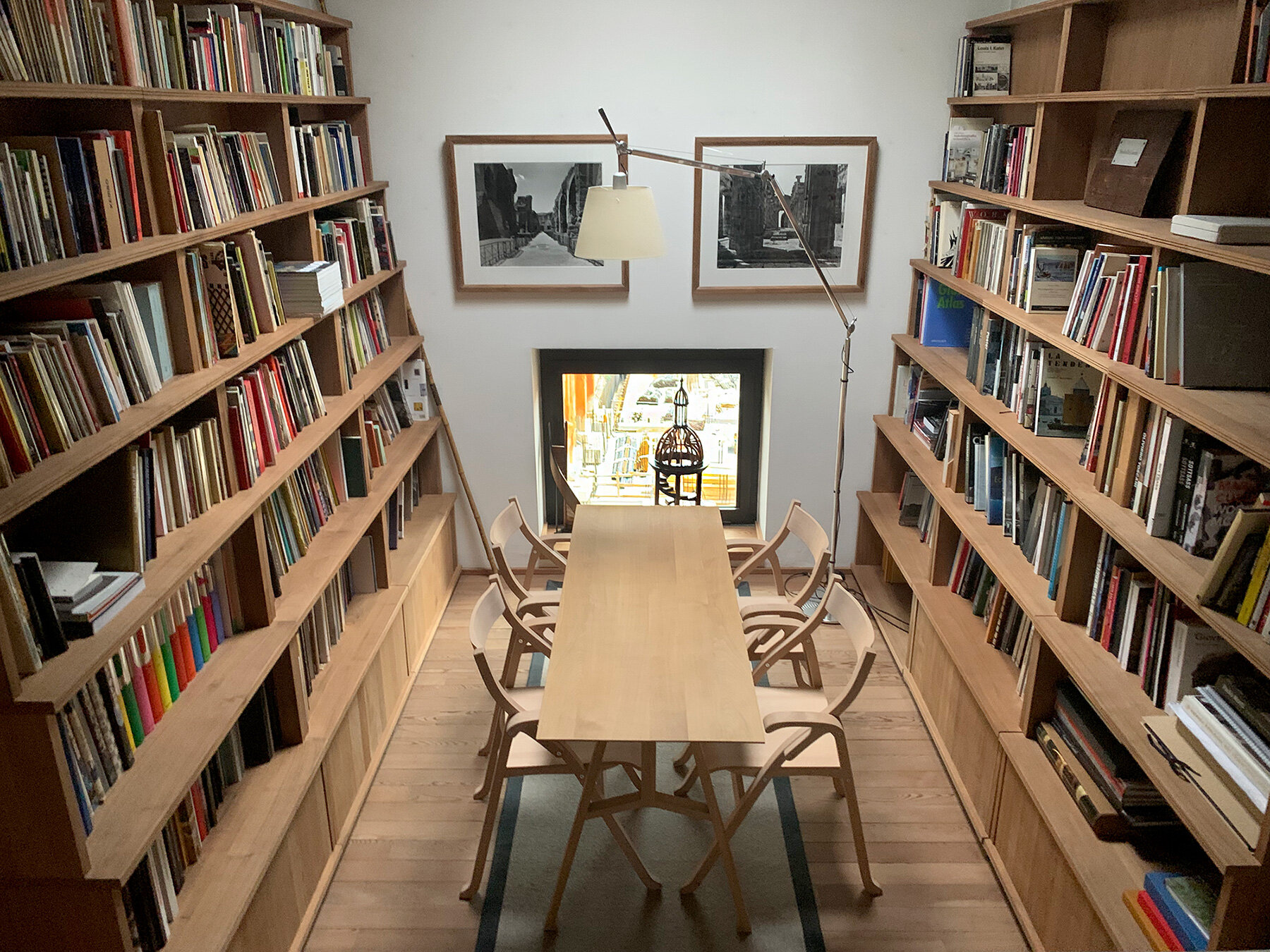 DB: do you have any particular project from your career that you’re most proud of or that has given the most satisfaction?

MDL: there are several projects that I’m most proud of. nowadays architectural projects are not developed to design everlasting structures anymore: they have to overcome contingent and defined necessities and behaviors. I am, in fact, very proud of some of the projects we have worked on in the last few years: for example, the pavilion made for the 2015 milan expo and the ibm pavilion in piazza gae aulenti in milan.

I also take pride in the nuova manica lunga at fondazione giorgio cini: thanks to our interior renovation, the heritage protected building was able to acquire a brand new contemporary aspect e and atmosphere.

for other reasons, another project I am very fond of is the tbilisi bridge. it is a monument for peace that we decided to design not just as a physical connection between different parts of a city, but something to convey a message of peace and to bring together two different cultures. the bridge becomes a tool for achieving constructive and well-meaning behaviors. 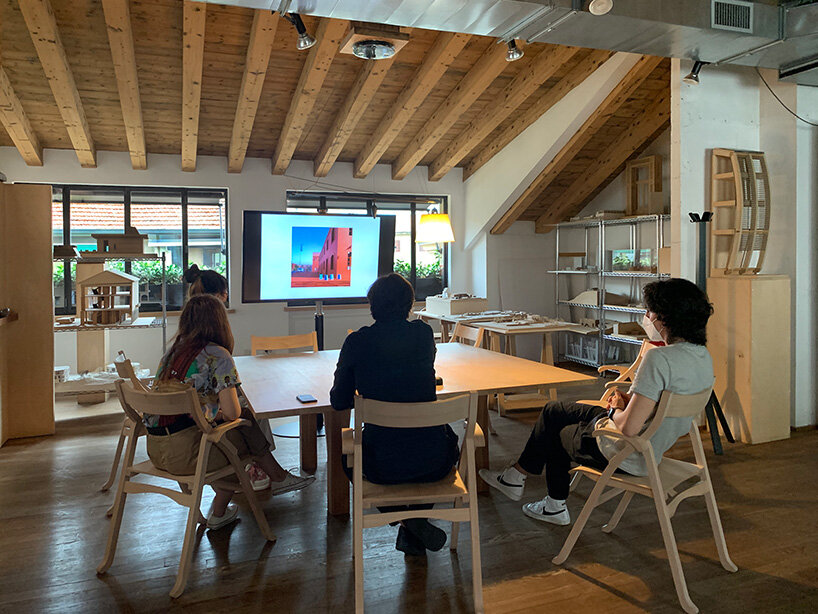 DB: is there any dream project or brief that you would still love to take on?

MDL: every project is a dream. for this very reason I’ve invented a brand new architectural category: the earth stations, dreamy structures aimed to connect different people and different communities, a place where walls don’t divide but instead help to create authentic cultural interactions. 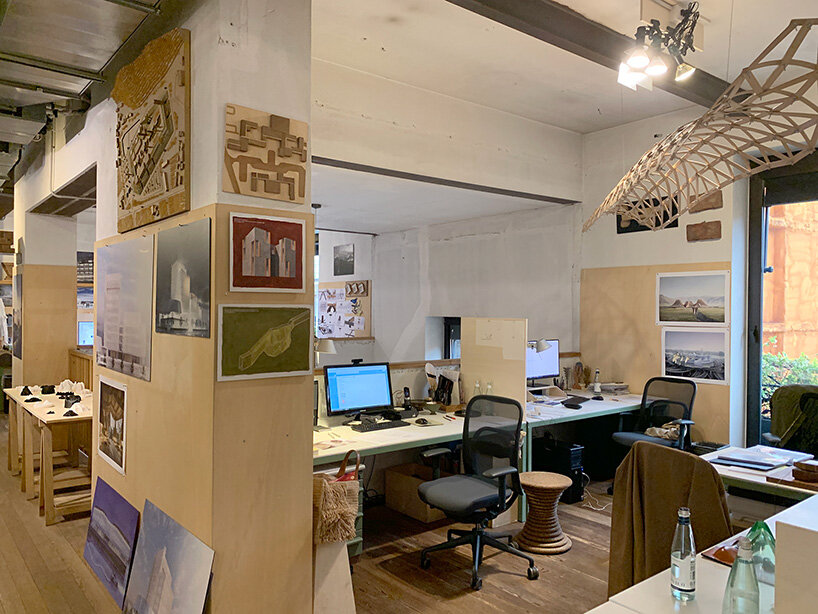 DB: how has your office changed over the past 10 years?

DA: three years ago, from a studio, essentially linked to the figure of michele de lucchi, our office has become a circle: a place where architects and other professionals can actively participate in michele’s forefront architectural vision with their own perspective. 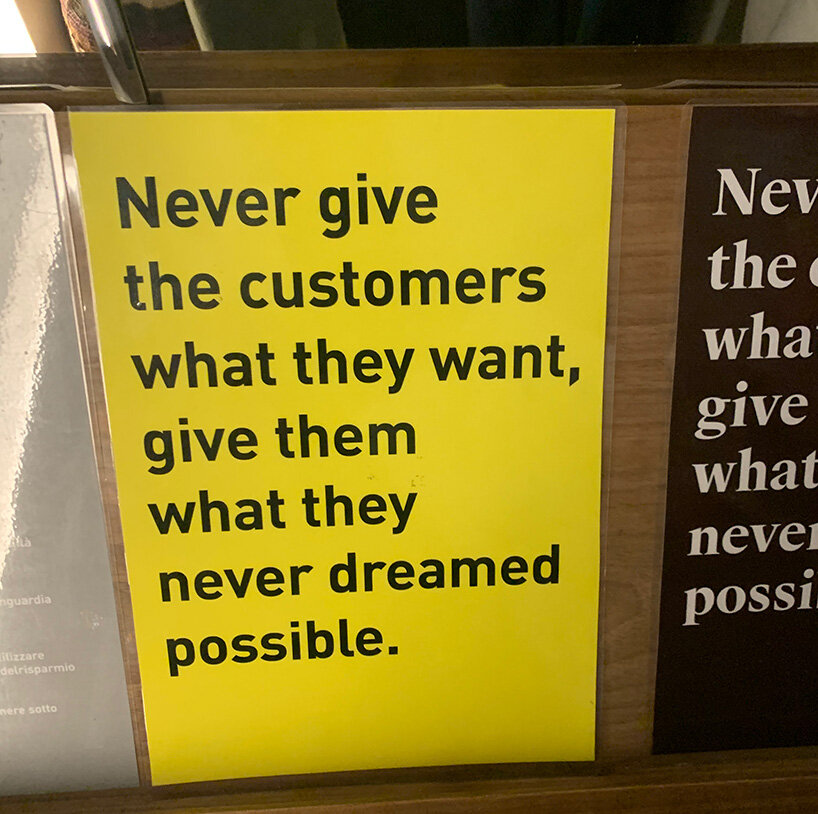 DB: can you tell us about the projects you are currently working on?

another captivating project for us is the opening of the gallerie d’italia museum in turin and in naples. originally located in milan, gallerie d’italia, with these two new venues, creates an important cultural connection from the north to the south of italy. the last caravaggio, will be showcased in naples, whereas the museum in turin will be designed to feature photographic and contemporary visual arts exhibitions.

we are also working on the royal academy of arts in vietnam: an educational campus, an education station dedicated to the arts for vietnamese children. 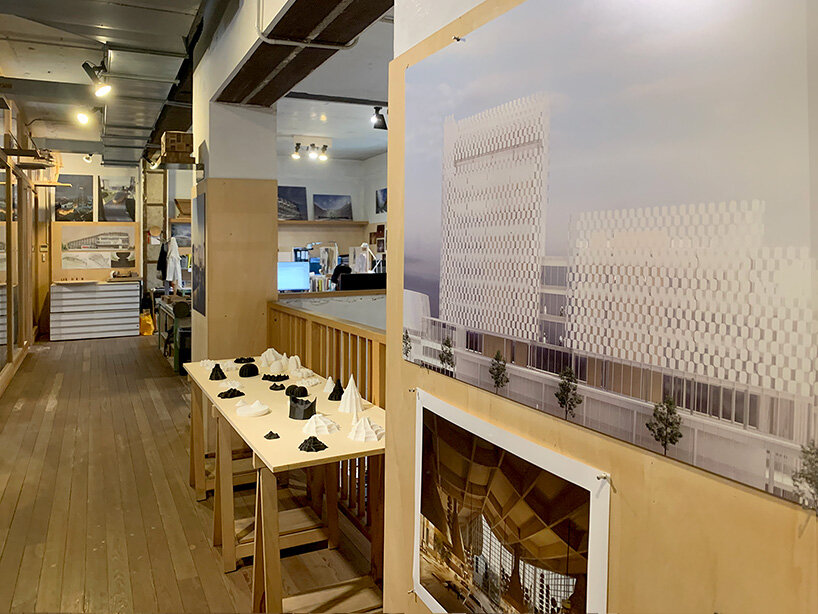 DB: what is wood for you?

MDL: wood is a natural vegetal fiber that makes us live and breathe clean air, which provides for wonderful landscapes and which allows us to create beautiful buildings, objects, and bridges. this is why I could never consider wood as waste. 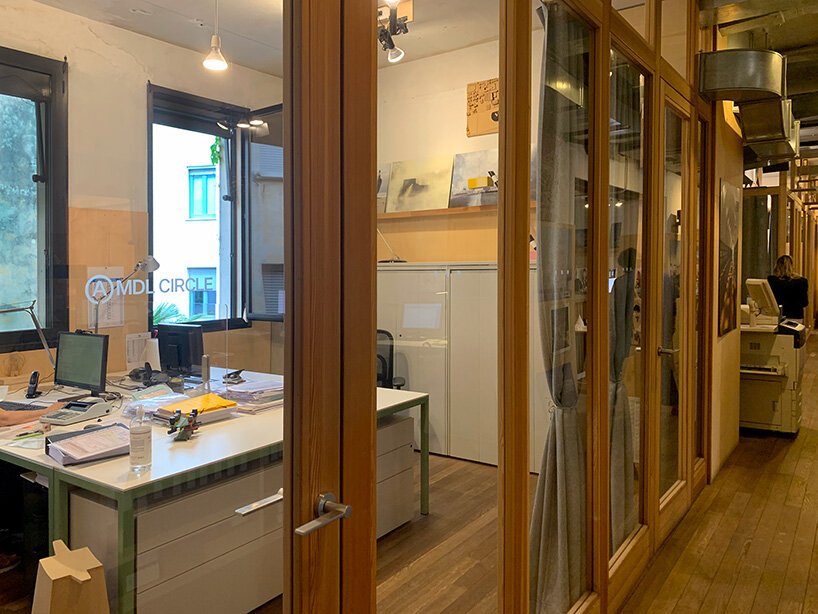 DB: what are you afraid of in the future?

DA: my biggest fear is that these new covid-induced confinements have caused an intensification of physical and mental barriers that we had previously managed to destroy. i’m afraid they could persist in the post-pandemic scenario. but i’m hopeful: people won’t allow it.

DA: it may seem simplistic, but my favorite moment of the day is when I wake up: I generally am a positive person and I am happy to think that I have 24 hours ahead of interesting and challenging things to do. 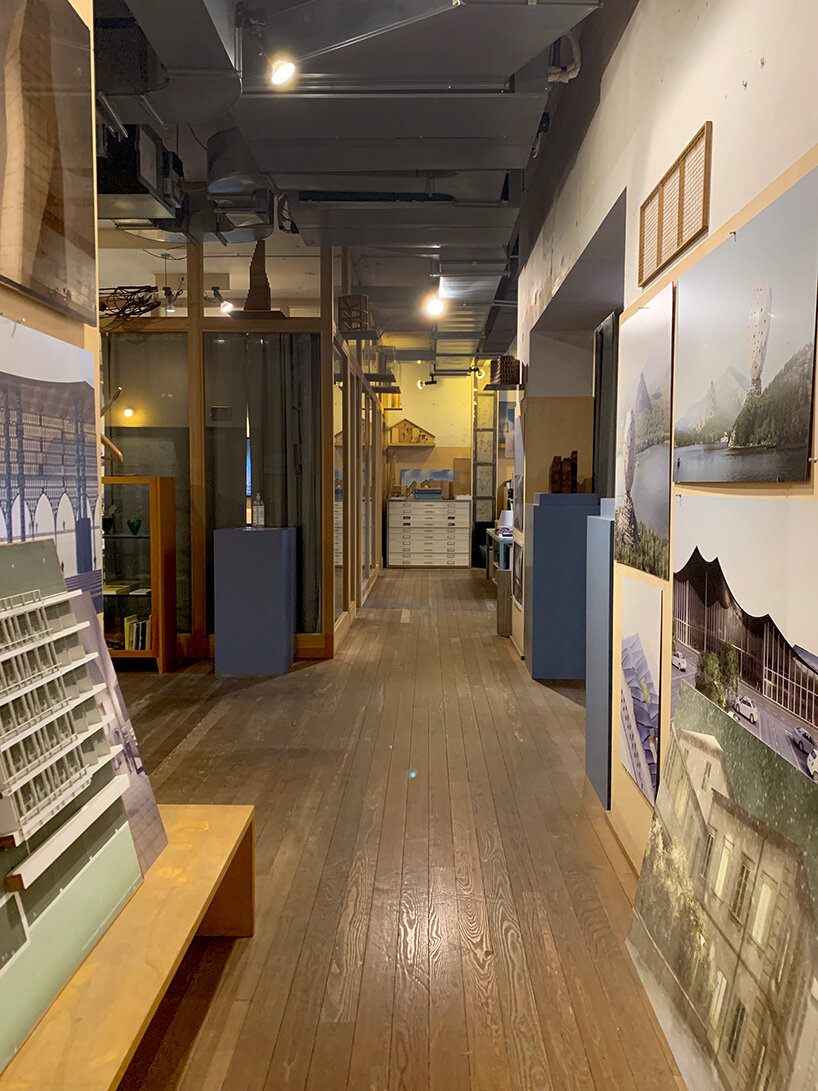 and by the way maestro, I’m proud to say we were born on the same day, just 34 years apart. 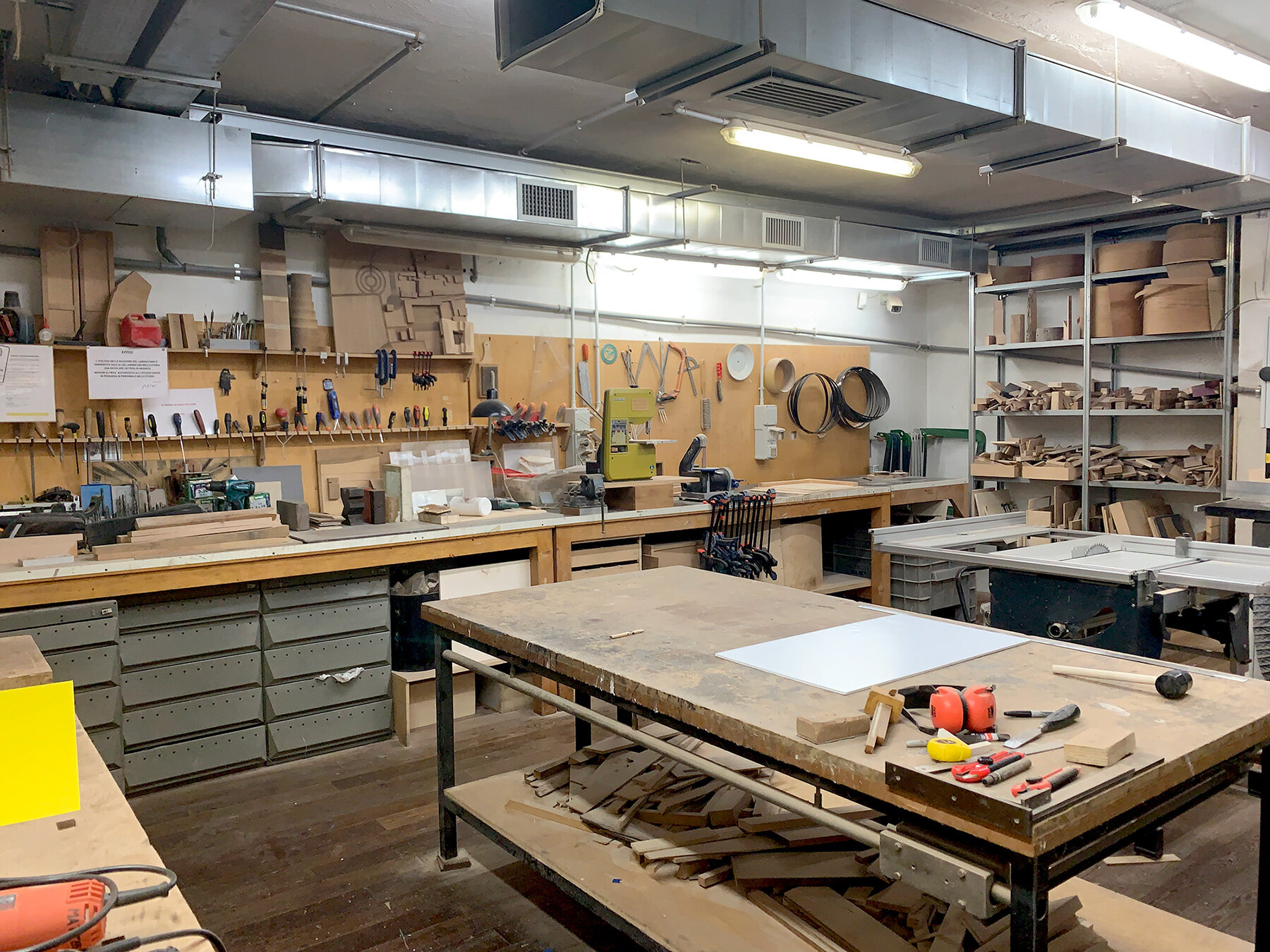 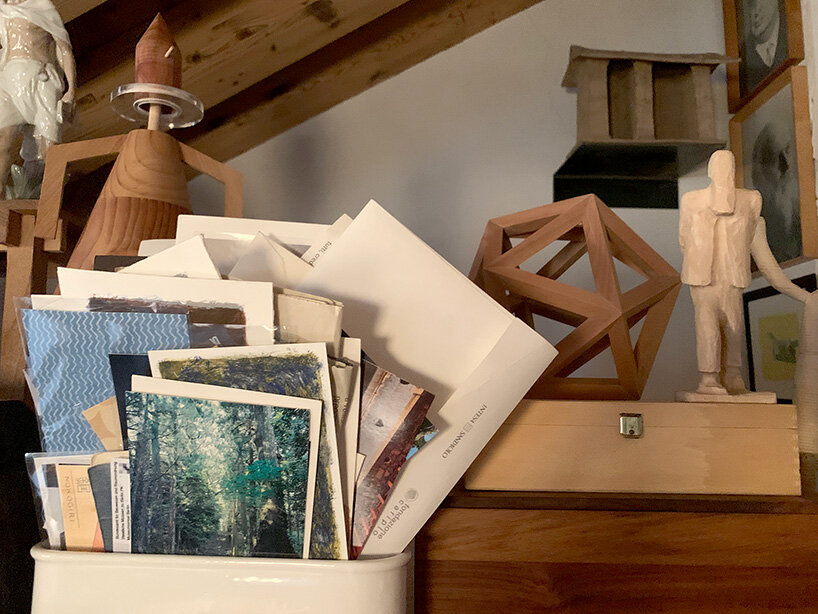 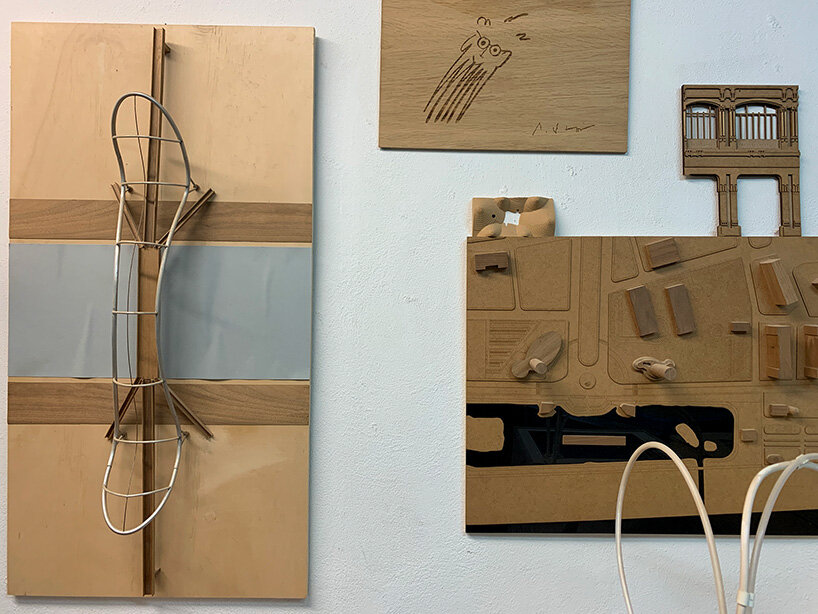 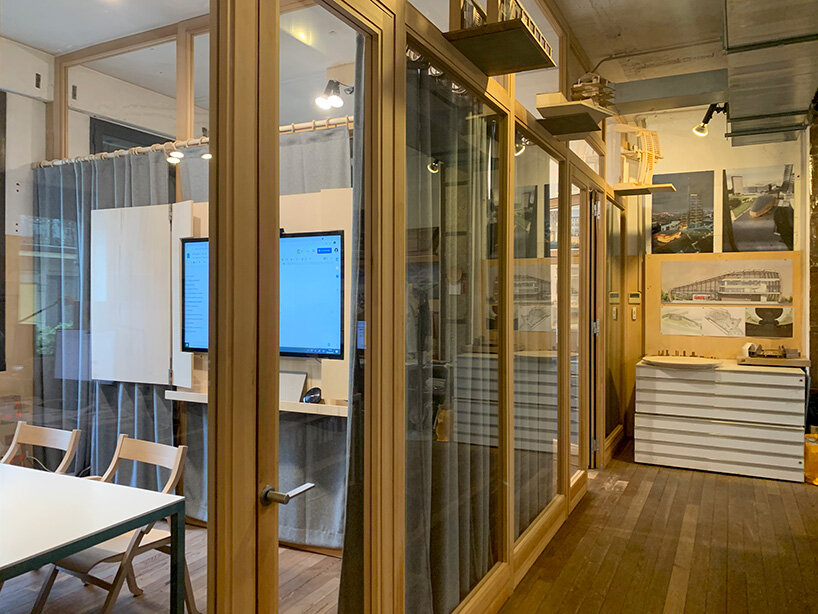 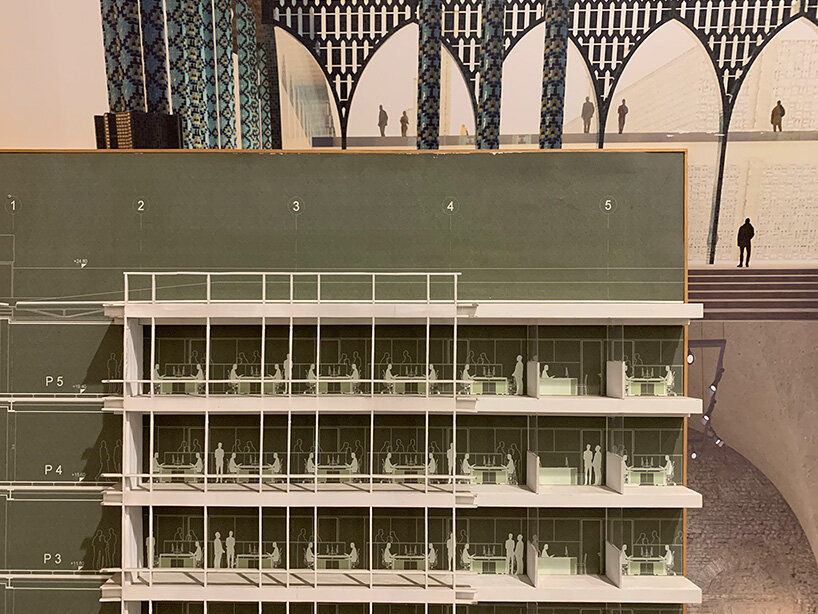 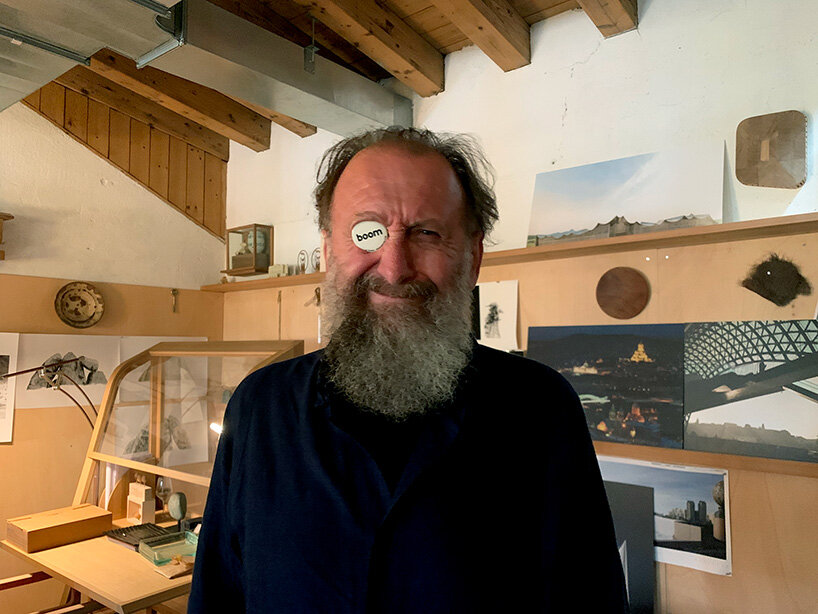 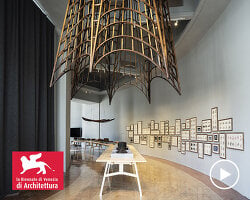 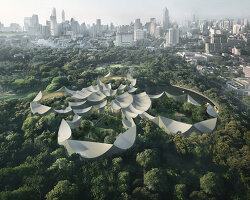 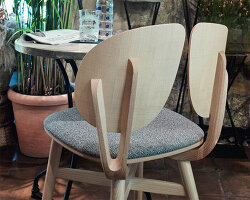 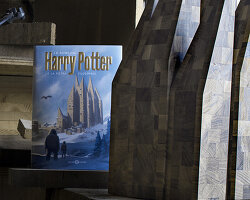