to create the national concert hall in vilinus lithuania, iranian firm mirage architecture studio posed the question of ‘how could we create a physical form of identity in the context of a historic city?’ their aim was to connect the old and new lithuanian identity and design a space that embodied this connection. working with a building erected in 1963, they wanted to both preserve the collective memory of society yet add a layer of contemporary innovation that would bring an outdoor entertainment to the city. 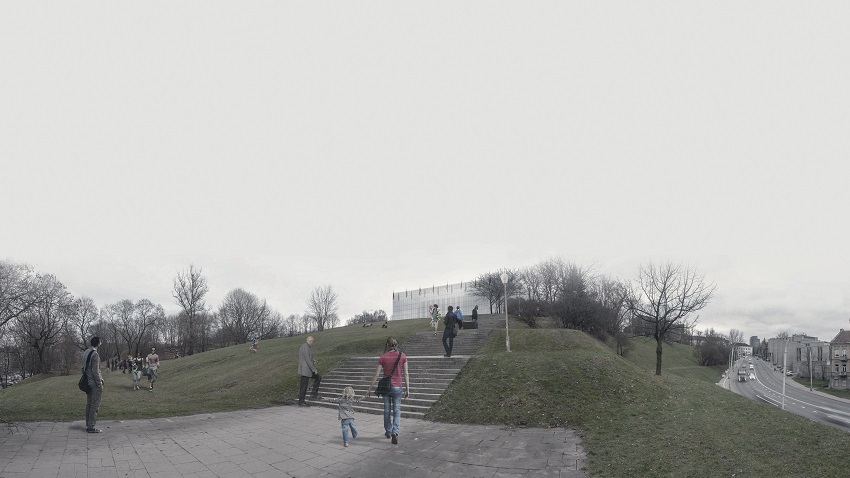 the architects placed a glass cube upon the hill, a neutral approach that preserves the proportions of the old trade union palace and reflects the city and the surrounding nature. also, by keeping and restoring the pillars on the north facade of the old building, the graffiti artwork of mariusz waras remains visible, using the glass as a garment and respecting the historical building. 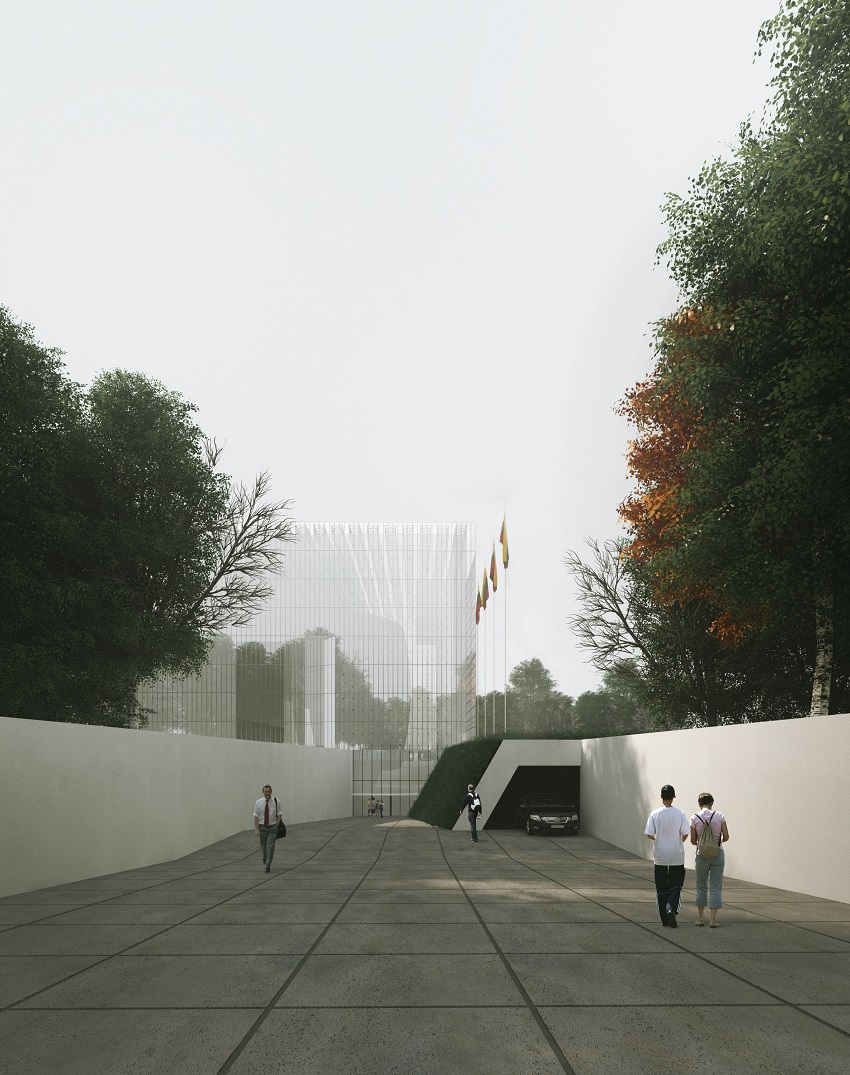 the cube’s facade is double glazed: the outer shell is completely transparent meanwhile the inner shell is opaline. one reflects the outside, while the other reflects the enigmatic atmosphere inside. the glazing is made of photovoltaic tiles and produce a wide range of solar energy. so, in addition to creating a sense of belonging for the audience, the cube suggests an inexpressive and semi-transparent state. 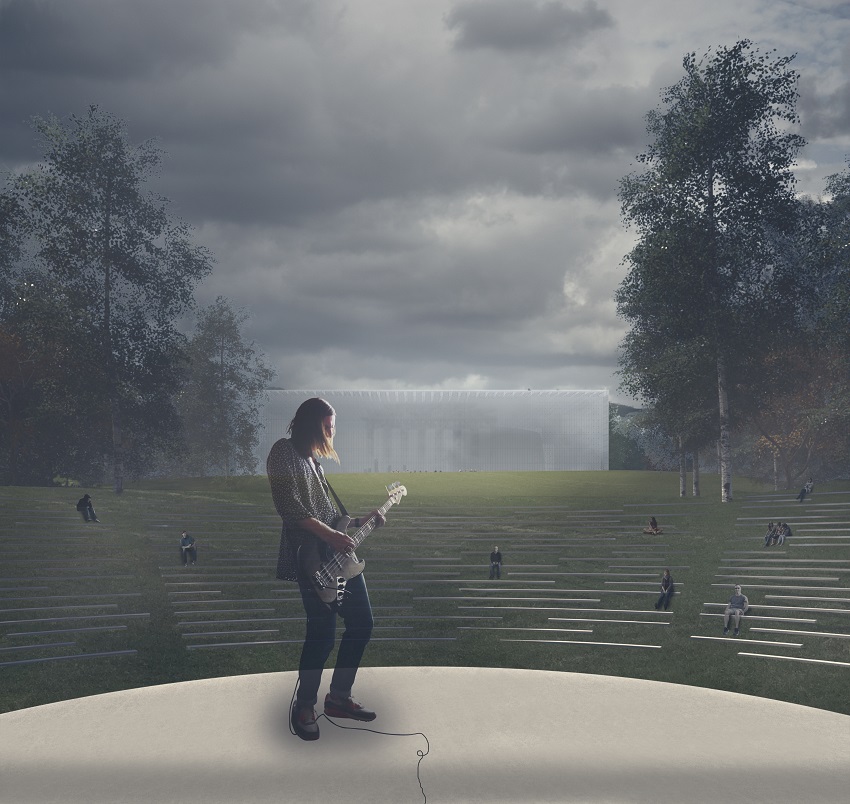 while the reflections are mainly seen during the day, at nighttime the project transforms into a spectacle. the lithuanian national music house gleams, using more than 18000 holographic displays.  thus, the building’s appearance seems ever-changing during the night, displaying a variety of surreal and abstract images. it becomes an exhibition of contemporary lithuanian artists’ works, or even live performances of what is going on inside the concert hall. the effects achieved during the night turn the neutral glass facade into a multi-dimensional and limitless, expressive volume. 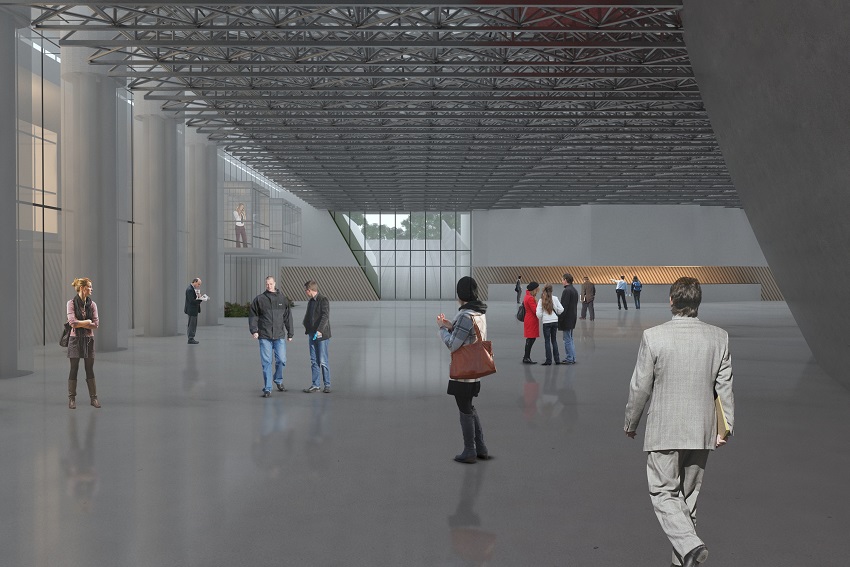 mirage architecture’s design is a building that seems simple on the outside, but complex on the inside. upon entering the intricate interiors, guests walk into a space that has glass on the floor and its underlying spaces are visible. due to the glass floor, spaces that are as far as seven meters below ground will be filled with natural light. 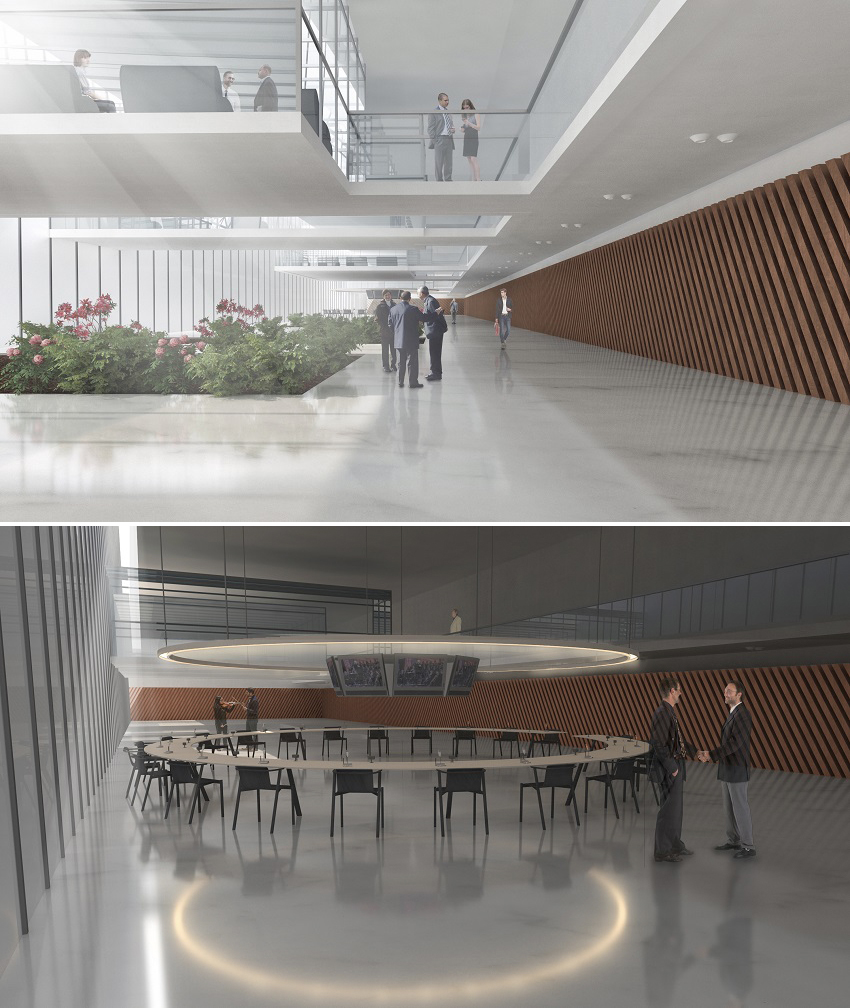 going forward, the materials morph into dark, rigid concrete, contrasting the light, transparent materials that enclose the building. this heavy, metal-reinforced concrete structure is also double-layered, inspired by historical domes of two shells emphasizing the salon’s protection against external noises. the integrated and armored structure is coated with a truss structure on the roof that becomes a space for artistic circles, workshops and training venues for the great artists of the lithuanian symphony orchestra. the musicians will have a full view of both the city’s viewpoint and the great hall. 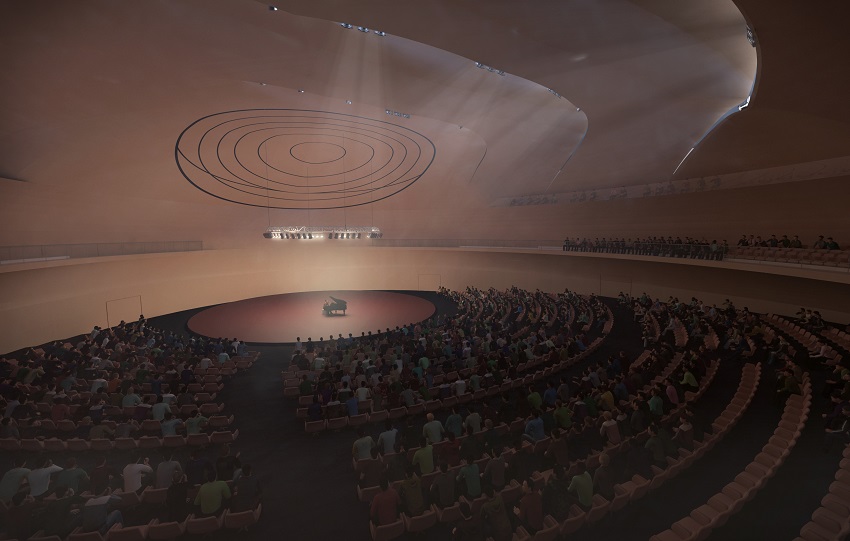 all the main functions of the building lie within the concrete core, moving the services spaces to the lower floor. the circulation throughout the building occurs through the ramps formed in the midst of the two shells of the core. in addition, nine vertical shafts provide different services. 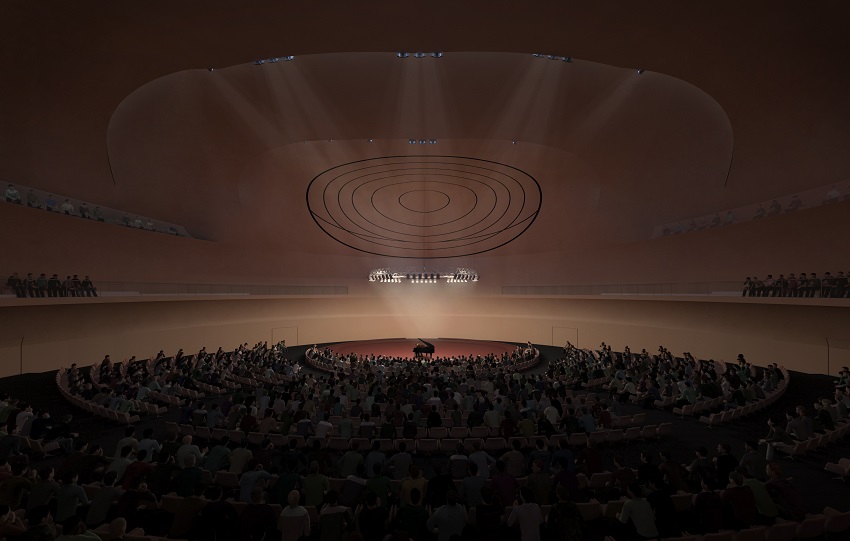 for the main hall’s interiors, mirage tried to achieve the almost-perfect accuracy of natural acoustics. through research on historical forms, the architects found that one of the technical features of these buildings was their acoustic quality. the architectural technique used in the old theater shows its evolution in this regard, which led the design to become a space with elliptical geometry with a proportion of 3x4x5. this form is also kept pure on the ceiling, integrating an interior space without any auditory blind spots. the materials used for the interior walls of the hall are recycled from natural tissues to further enhance the acoustics. 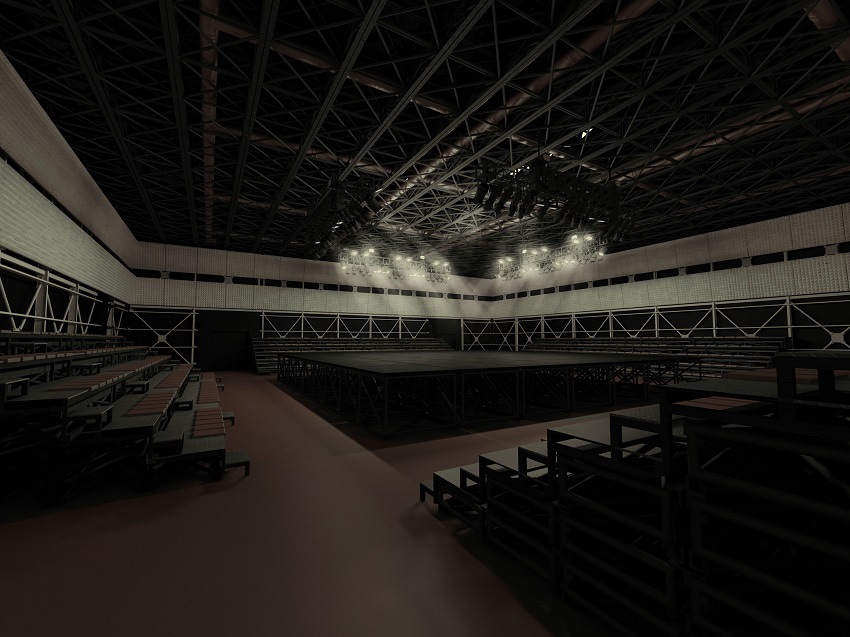 apart from the stage facilities, all light and sound installations are located behind this shell for a better fluidity and sound integrity. for better versatility within the space, the scene is movable in the horizontal and vertical axis and also rotates fully. backstage facilities have been moved to high and low heights to handle services as quickly as possible. there is also the possibility to move other elements and stairs around the stage. 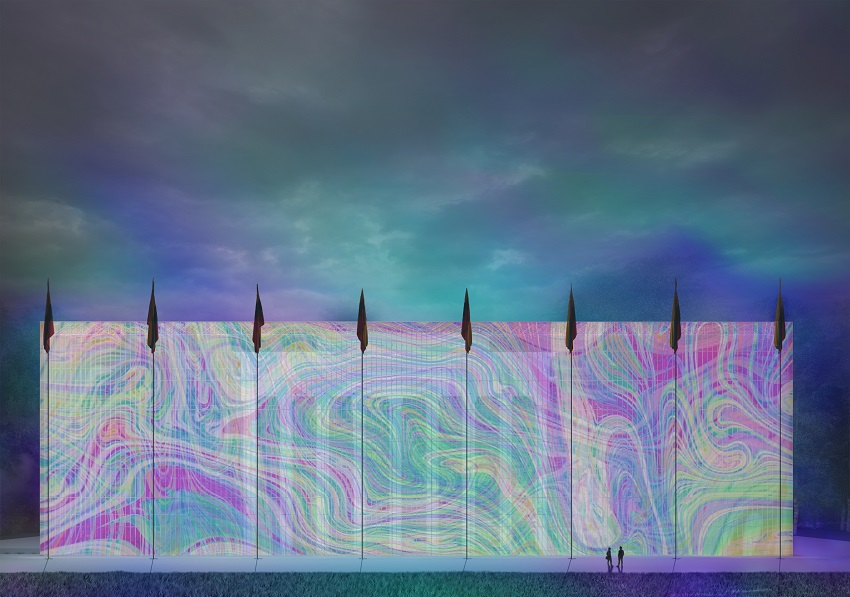 in the underground section, there is a multi-functional hall with a capacity of up to 550 people with maximum flexibility in seating and stage strategy. the architects’ first priority for the site was the natural substrate and to keep refurbishment of tauras hill park proposed by si vilniaus planas in 2018. however, the architects did propose to increase the capacity of outdoor amphitheater in the lower part of the hill. in this way, the multi-functional and independent space will be open to the public and even popular musical performers. 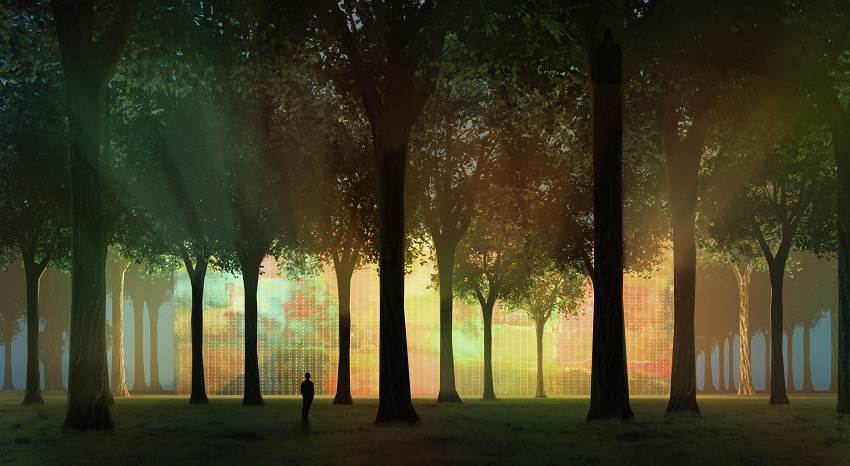 in accordance with designing a sustainable building, the architects focused on a series of features for the concert hall. the use of a modern solar glass system increases the power absorbed enough to cover the power needed for the holographic displays of the facade. the architects also used sustainable and recycled materials from the natural environment as acoustic material. all the metals used in the structure of the glass structure, as well as trusses and reinforcement concrete structures of the core are recycled from the previous building. finally, there was minimum amount of manipulation in the nature of tauras hill park. 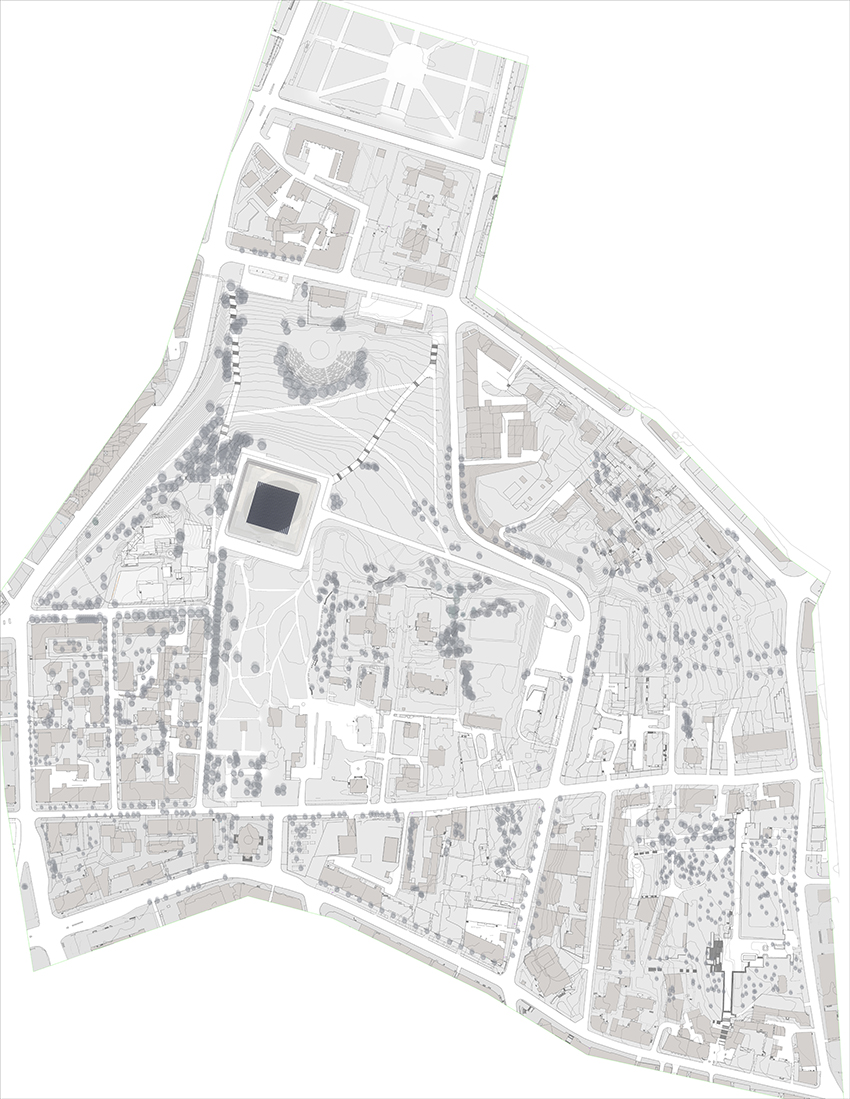 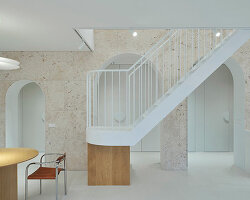 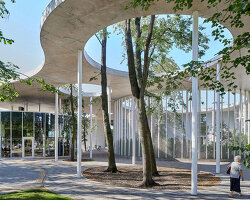 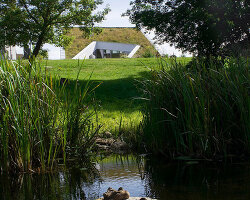 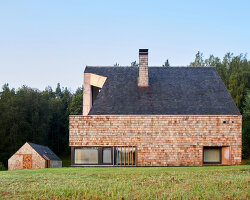