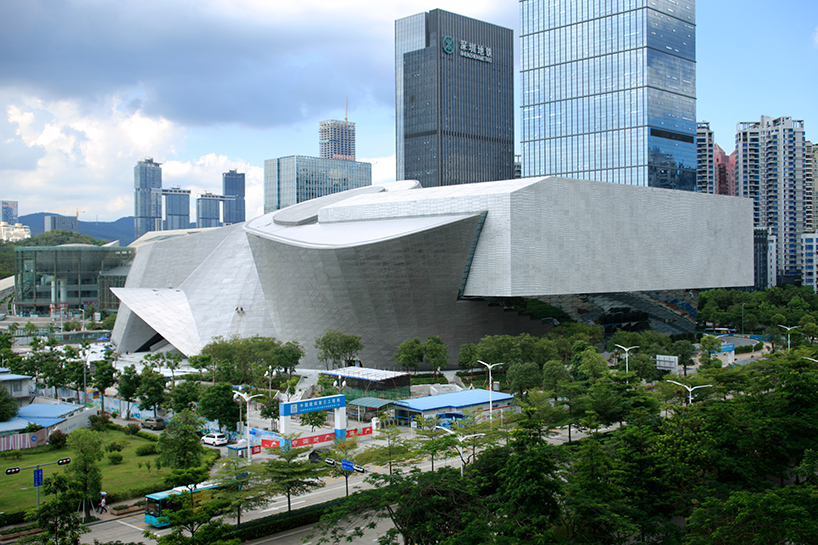 MOCAPE, the museum of contemporary art & planning exhibition, is nearing completion in shenzhen, china. designed by architecture firm coop himmelb(l)au, the building combines two independent institutions — the museum of contemporary art (MOCA) and the planning exhibition (PE) — as a cultural meeting point and a venue for architectural exhibitions. the development includes a shared lobby, multifunctional exhibition halls, auditorium, conference rooms and service areas, to be used by both institutions.

coop himmelb(l)au has designed both museums as separate entities as a way to emphasize their individual functional and artistic requirements. however, the two programs are merged in a monolithic body surrounded by a multifunctional, transparent façade that allows views deep into the shared entrance. ‘from the inside, visitors are granted an unhindered view onto the city suggesting they are somewhere in a gently shaded outdoor area, an impression enhanced by 6 to 17 meter high, completely open and column-free exhibition areas,’ explain the architects. 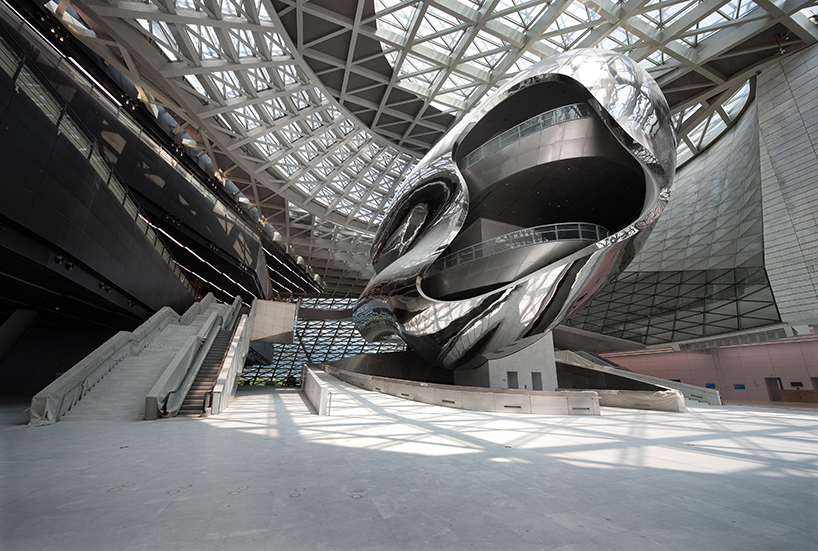 from the lobby, visitors ascend to the main level via ramps and escalators and enter the ‘plaza’, an area which serves as a point of departure for tours of the museums. from here, guests can access a multi-functional hall, several auditoriums, and a library. accessible on several floors, a reflective and softly deformed ‘cloud’ hosts a number of public functions such as a café, a book shop, and a museum store. the cloud is connected to the exhibitions rooms of both museums with bridges and ramps. ‘with its curved surface the cloud opens into the space reflecting the idea of two museums under one roof,’ adds the design team. 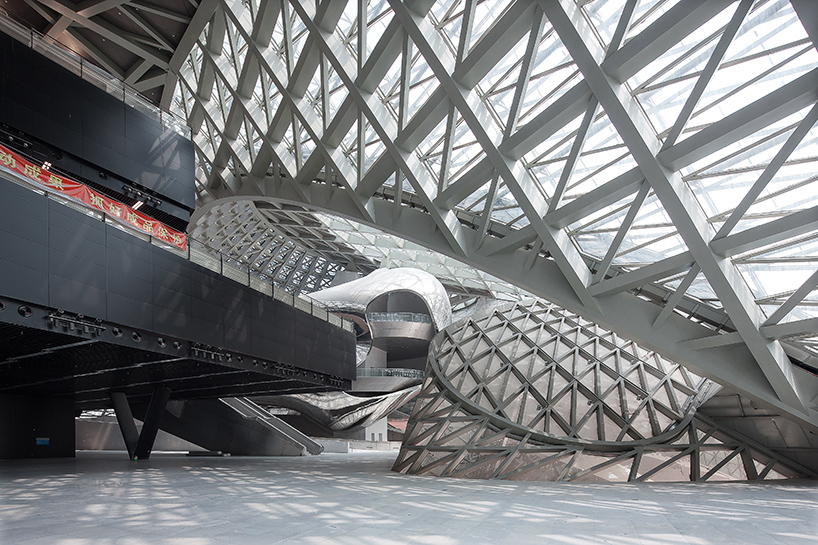 from the lobby, visitors ascend to the main level via ramps and escalators

MOCAPE completes the eastern part of the masterplan for shenzhen’s city center and fills the last gap in the futian cultural district between a youth activity hall to the north and an opera/library complex to the south. as with other buildings in the district, the main level of the development sits 10 meters above ground level, creating a stage-like platform that acts as a unifying element with the existing urban fabric. 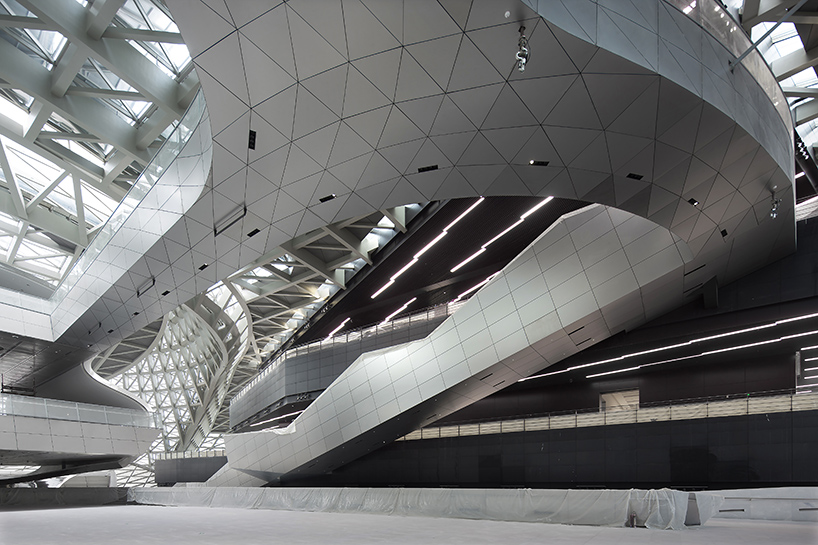 the building’s skin includes of an outer layer of natural stone louvers, and the climate envelope made from insulated glass. this surface remains structurally independent from the mounting framework of the museum buildings, enveloping the two institutions, the cloud, the plaza, and the multifunctional base. 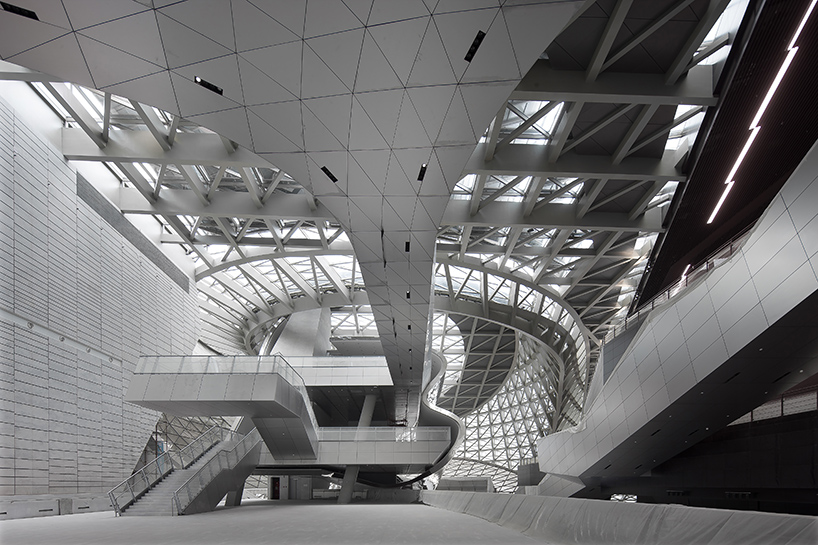 from an environmental standpoint, pollution free systems and facilities use renewable energy sources through solar and geothermal energy (with a ground water cooling system). meanwhile, the roof of the museum filters daylight for exhibition rooms, reducing the need for artificial lighting. MOCAPE is scheduled to complete later in 2016. 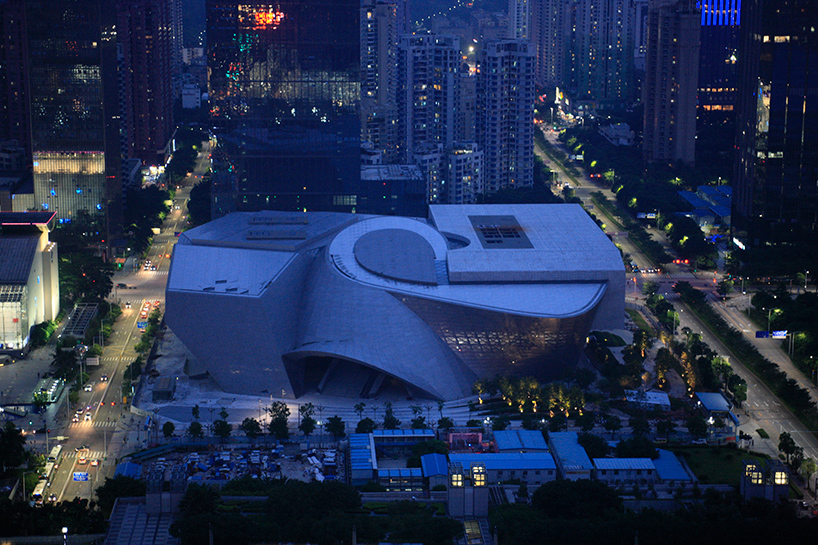 MOCAPE is scheduled to complete later in 2016