Theo C. Domini’s conceptual series MEDICI summons the imagination of the 17th century history paintings depicting young, aspiring artists on their journeys across Europe. The conceptual digital renderings imagine 21st century architectural interiors reinterpreting the studios and private chambers of ambitious artists who had traveled across the continent on The Grand Tour on an enriching journey seeking inspiration, education, and instruction.

The renderings reveal minimalist, almost primitively rustic chambers that are left free of any adornments to create a relaxing space for rest and recluse, pushing inhabitants to summon their imaginations for introspection. The dark wooden spaces create a sense of intimacy and Romanticism, with expansive empty rooms illuminated only by soft glows of light. 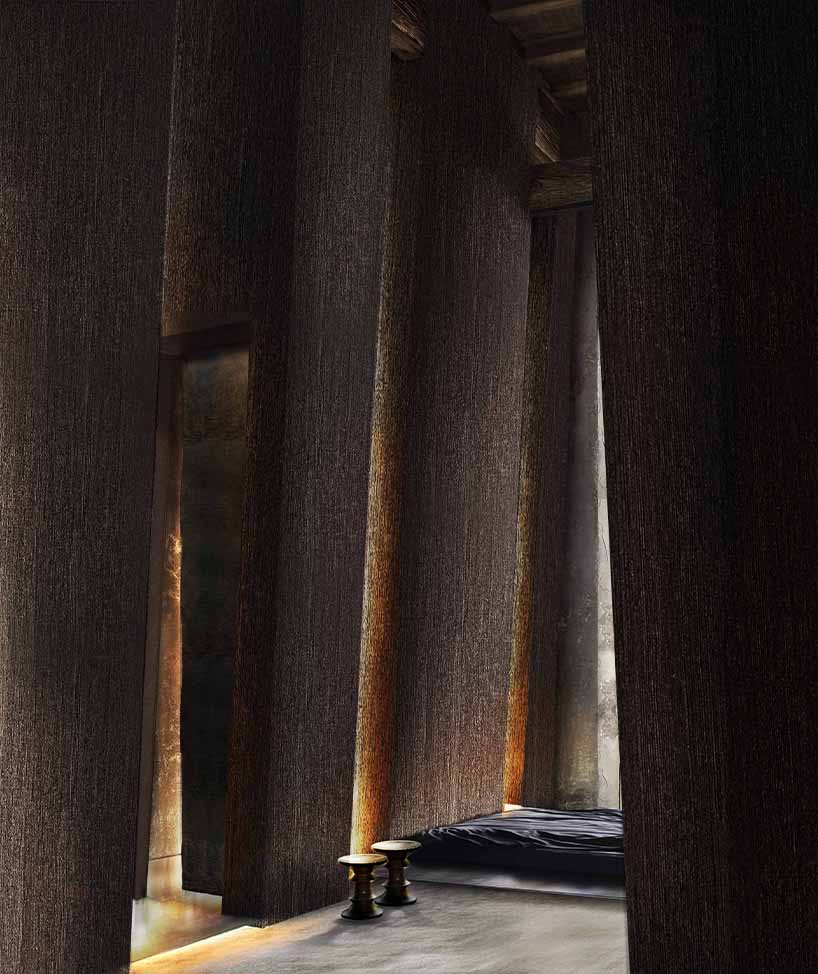 all images by Theo C. Domini

Seeking inspiration for his series, Theo C. Domini looks to the portraits of artists traveling through 17th century Italy, including a portrait of French painter Louis Vincent Leon Pallière in is bedroom/studio at the Roman Villa Medici by Jean Alaux. Created in 1817, the scene captures a pared back sense of intimacy and Romanticism with the artist longingly playing his instrument against a picturesque natural backdrop, surrounded by only a few of his cultural finds adorning the walls.

The sparse interiors of the 17th century paintings, void of lavish ornamentation mark an unexpected juxtaposition to the lavish connotations of The Grand Tour. The images capture ‘a balance between the superb influence of the environment which welcomes [the artist], and a certain distance which allows him to become the support of an experience with ourselves,’ writes the architect. 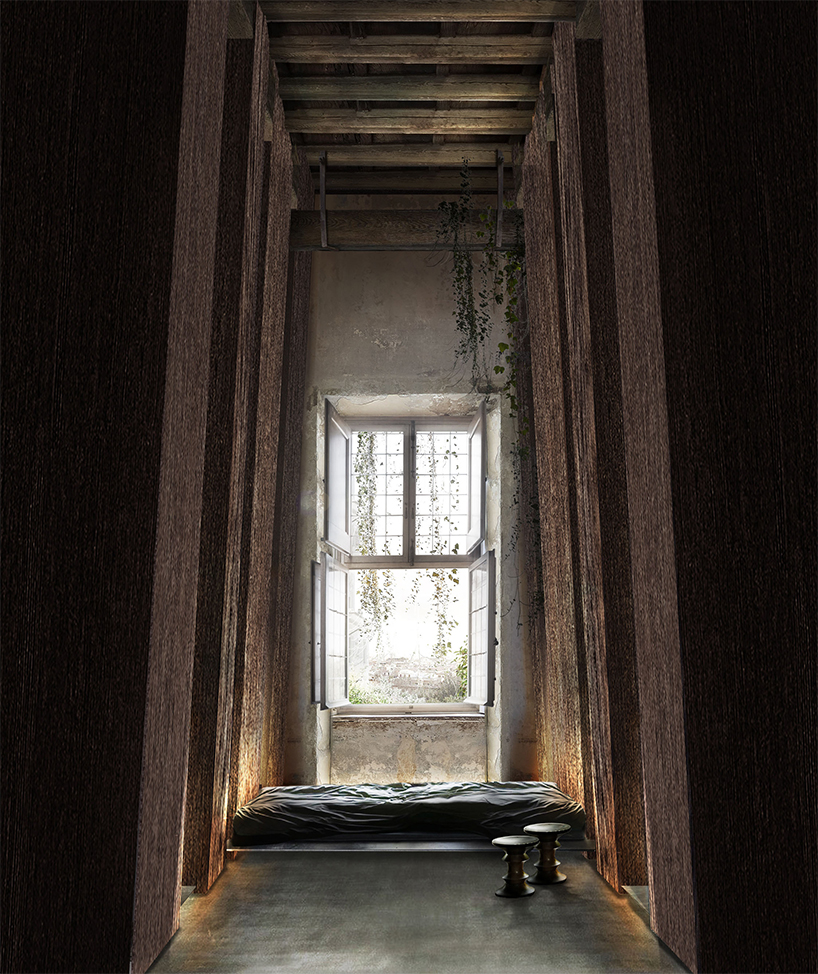 Theo C. Domini collaborates with designer William Guillon to render interiors that capture a similar sensibility. The rustic, minimalist interiors isolate the inhabitant’s mind from distractions, with the complete lack of adornment pushing them to introspection on an inner journey. Everything is organized around bare necessities, furnished without excess, fostering a reconnection with the notion of a primitive life.

The raw beauty of weathering woods, a soft glow of light illuminating the dark interiors as though exuding from flickering candlelight, and wide renaissance windows together encourage contemplation.‘Here, surrounded by very little, the influence of the place makes you think of things differently.’ 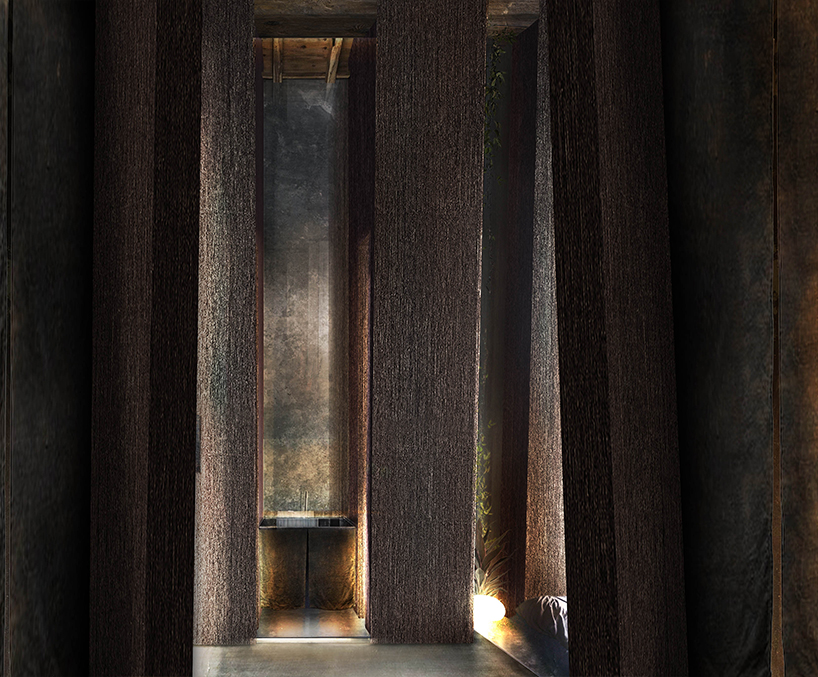 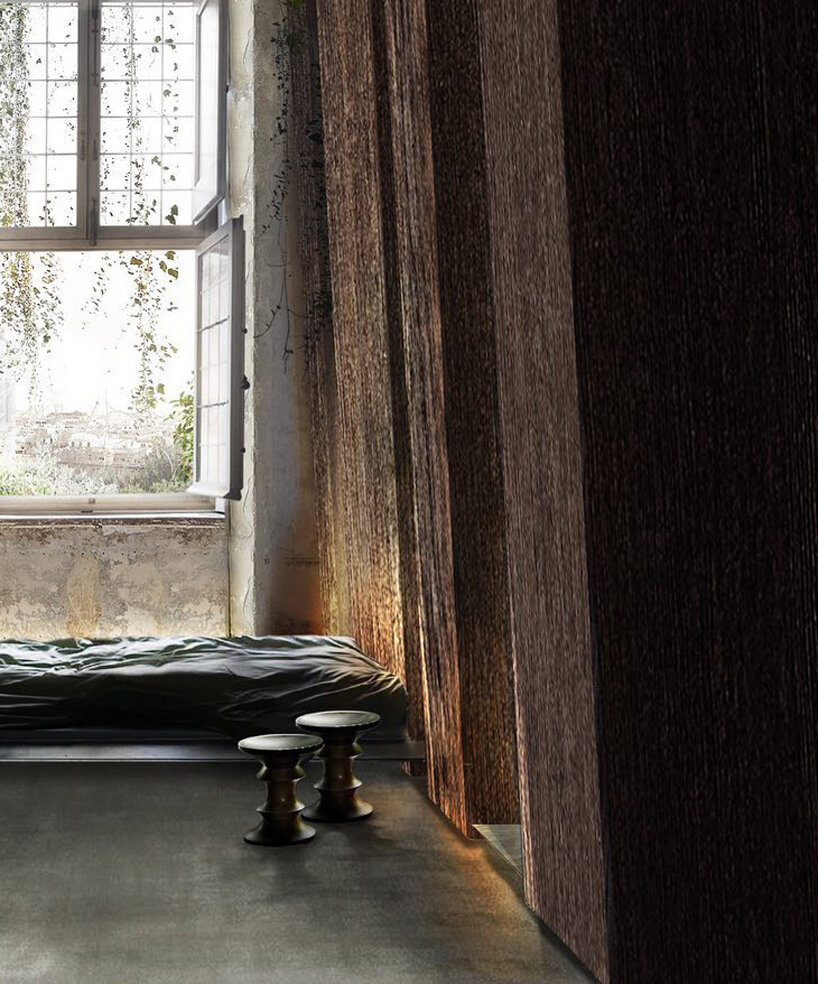 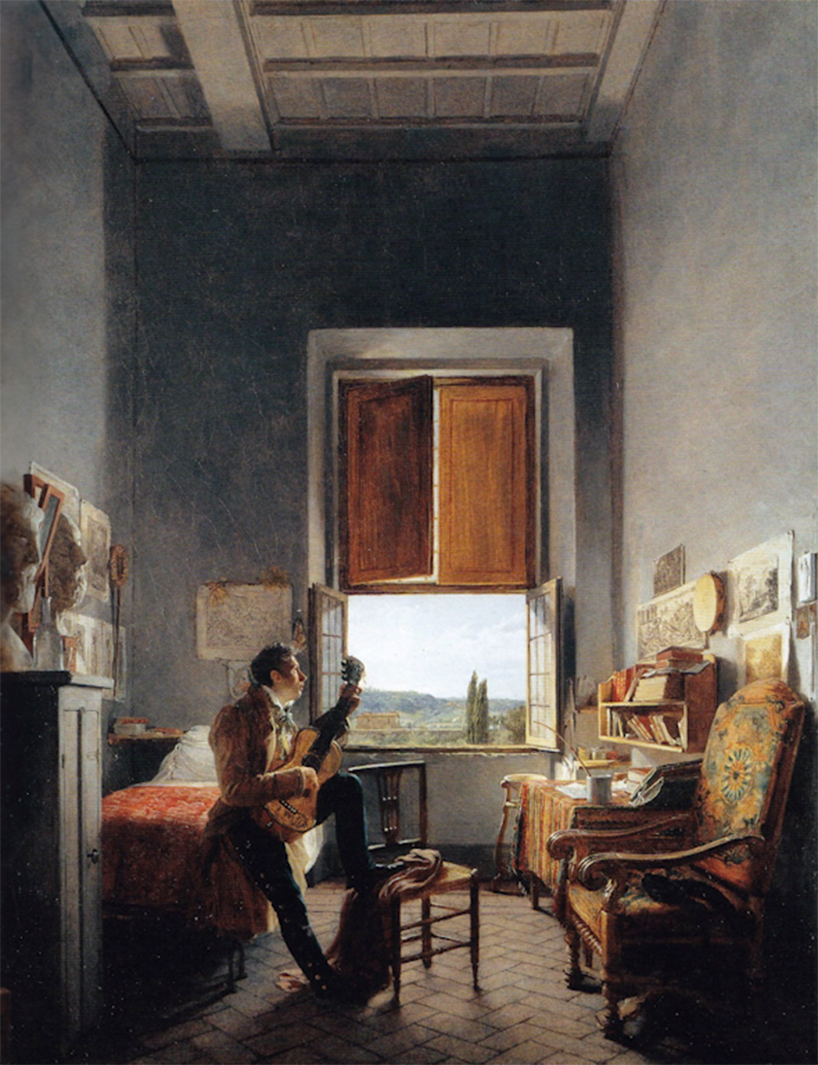 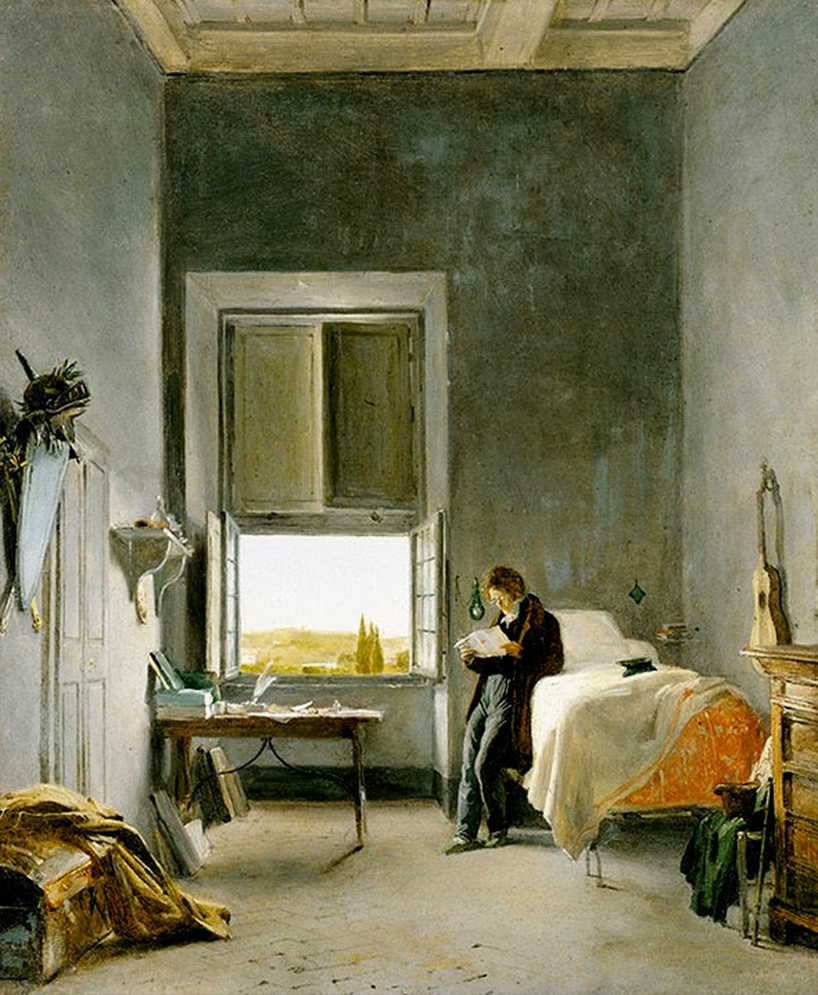 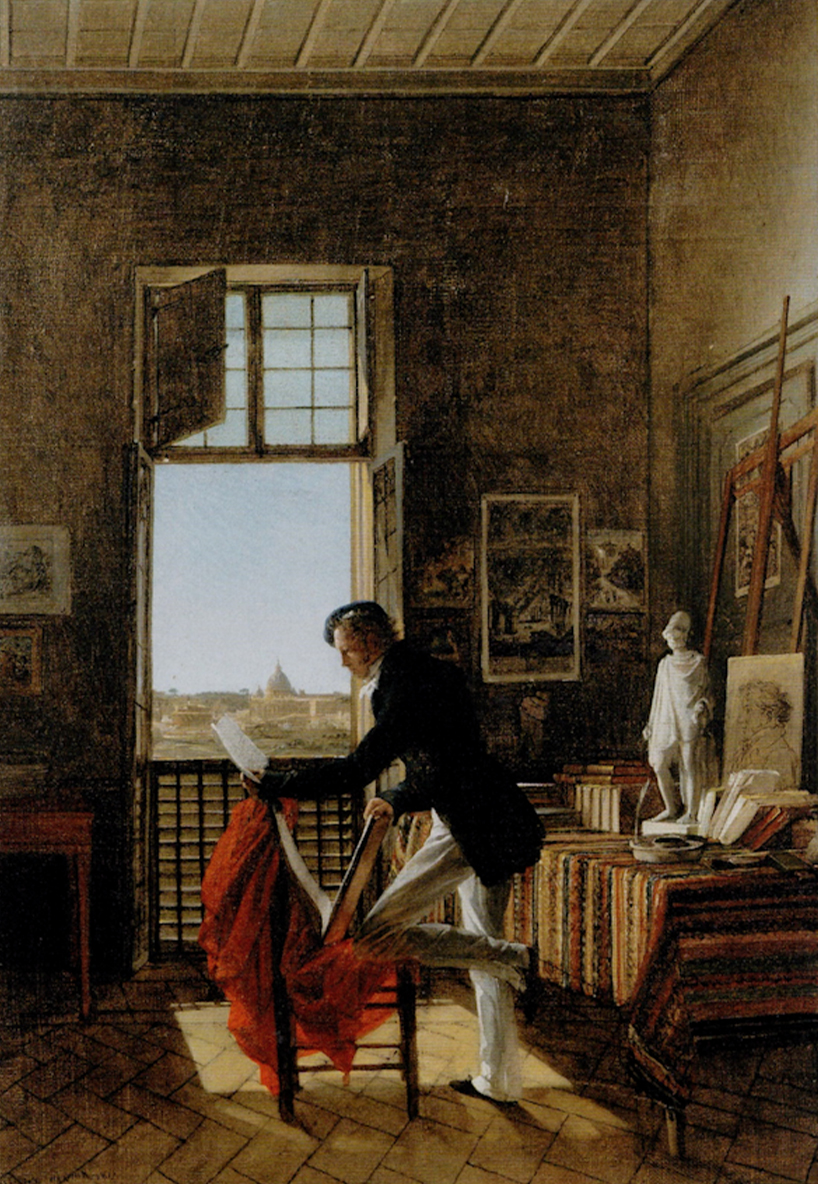