located in the historical city of isfahan in iran, the proposal for a reconstructed ayine khaneh palace (mirror pavillion) by mohammad yazdi rad celebrates the safavid dynasty of persia. the landmark was built in the 16th century, along the southern shore of the zayandehrood river in a garden called saa’dat abad. at that time, isfahan was chosen as the capital of the safavid era — where many majestic palaces, bridges and mosques have been built. conducted as an architecture master thesis, mohammad yazdi rad’s project has been mainly focused on recollecting the puzzle pieces of isfahan’s lost urban engineering during the safavid era. by doing so, he wishes to revive persian architecture, establish a cultural structure and promote the touristic infrastructure of the city. working in parallel with reconstruction, the architect has also designed a persian garden around the historical one of sa’adat abad. 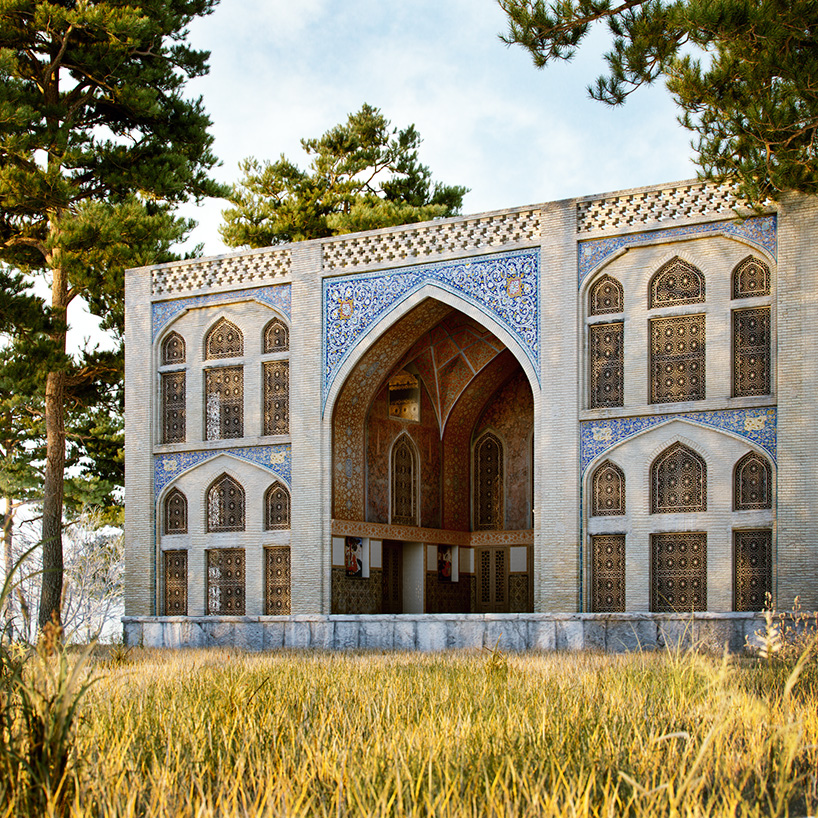 south façade of the mirror pavilion

up until the 19th century, the mirror pavillion was stable and intact in its architecture. however in 1891, through the battle for the throne, the palace — along with a number of other important structures — was destroyed under the request of zello soltan, the governor of isfahan. so based on historians’ descriptions, ayine khaneh was described as having a porch with 18 columns connected to a hall. the walls were decorated with mirrors and different paintings, while the floor was covered in marble. in the central part of the porch, there was a marble pool with fountains spouting from the mouths of four stone lions. today, the remaining elements of the palace are the lion-like masoned plinths. 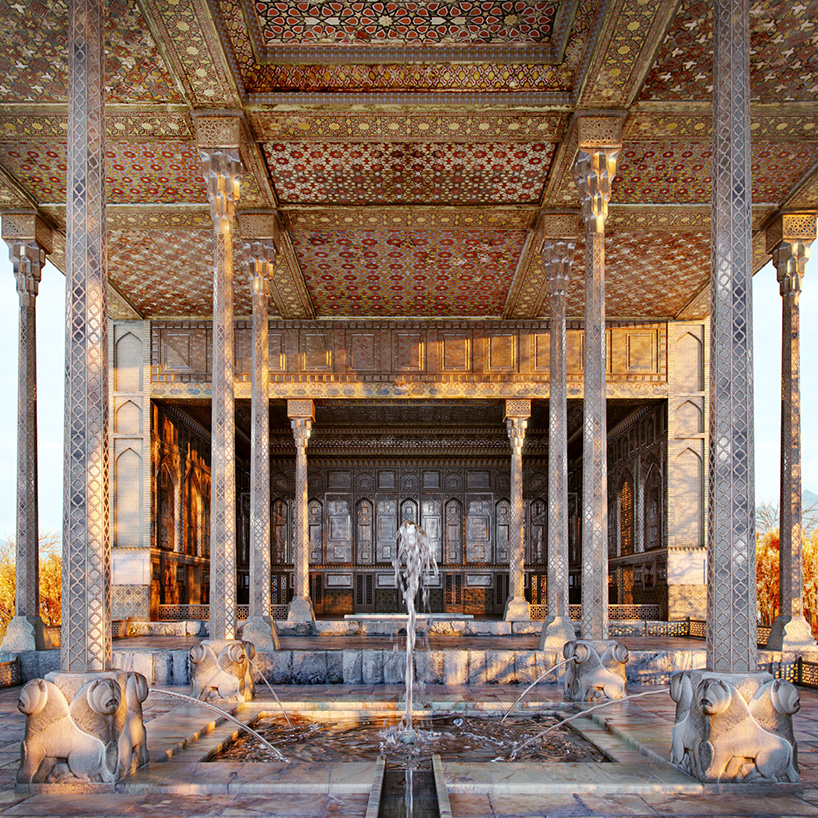 given how the architecture was mostly demolished from the 19th century, this project is drafted resorting to three important historical resources. firstly, the remaining pictorial documents, like sketches and plans drawn by french architects eugene flandin and pascal coste in 1840, as well as photographs taken by german telegraphist and photographer ernst hoeltzer before destruction of the palace. secondly, the written descriptions of this complex from persian and european historians and tourists like mirza tahvildar, jean chardin, and engelbert kaempfer. thirdly, the revision of the architecture of other pavilions built at the same time like the chehel sotoun palace, ali hapou, hasht behesht, and ashraf hall which still stands. 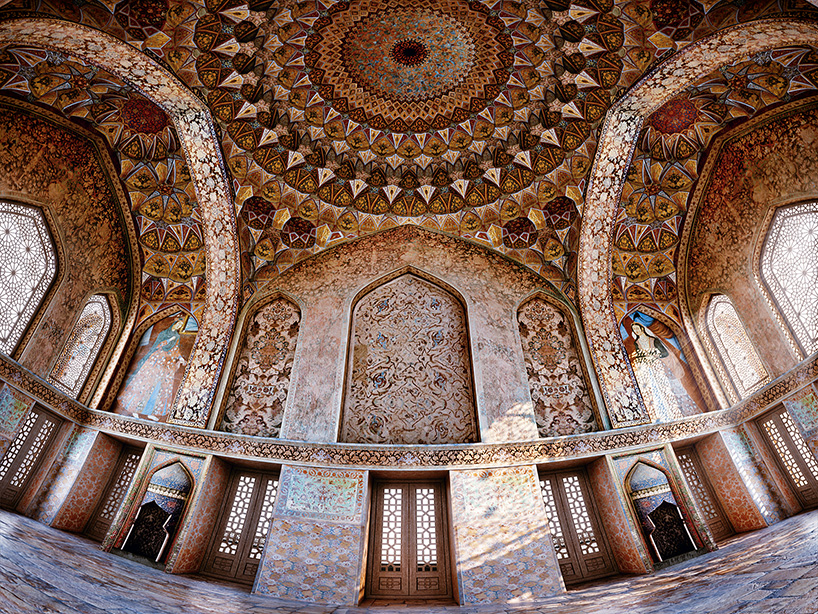 the palace hall connects to the porch 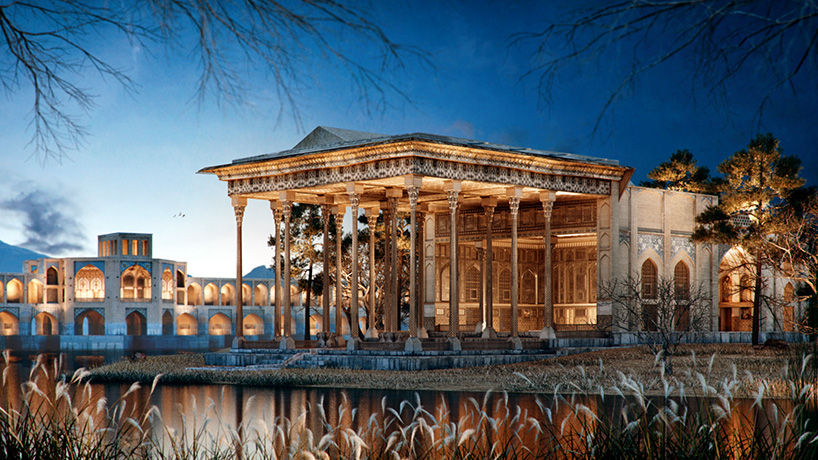 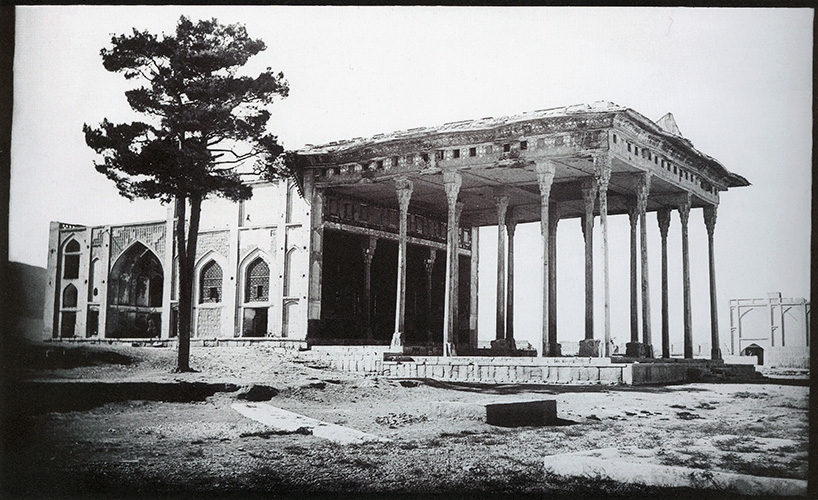 the pavillon after being destroyed
photo by ernst hoeltzer 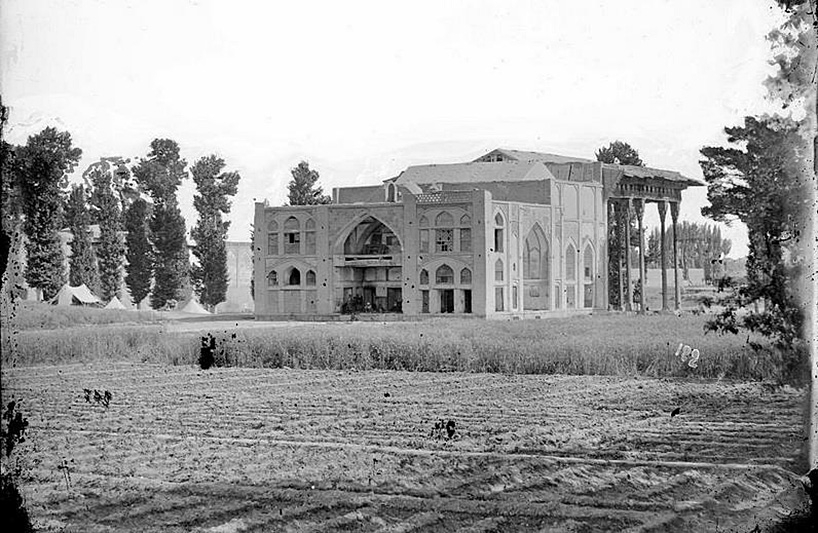 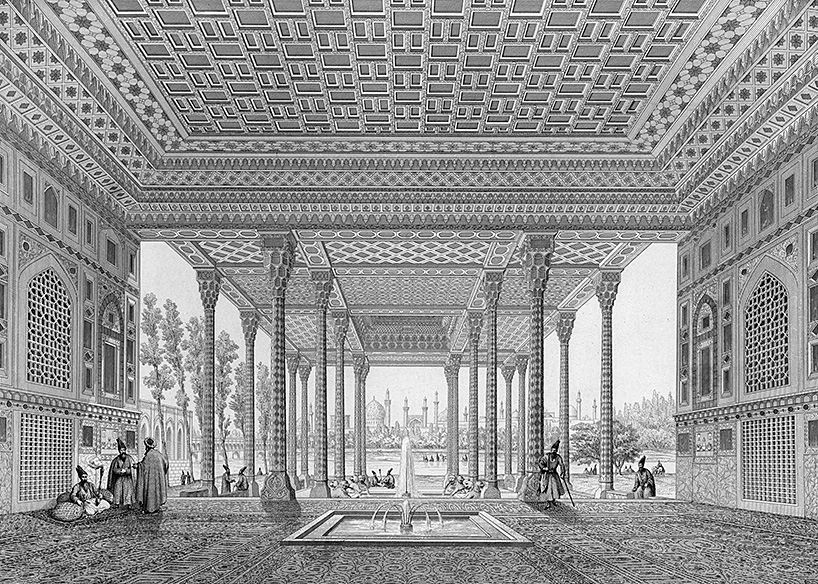 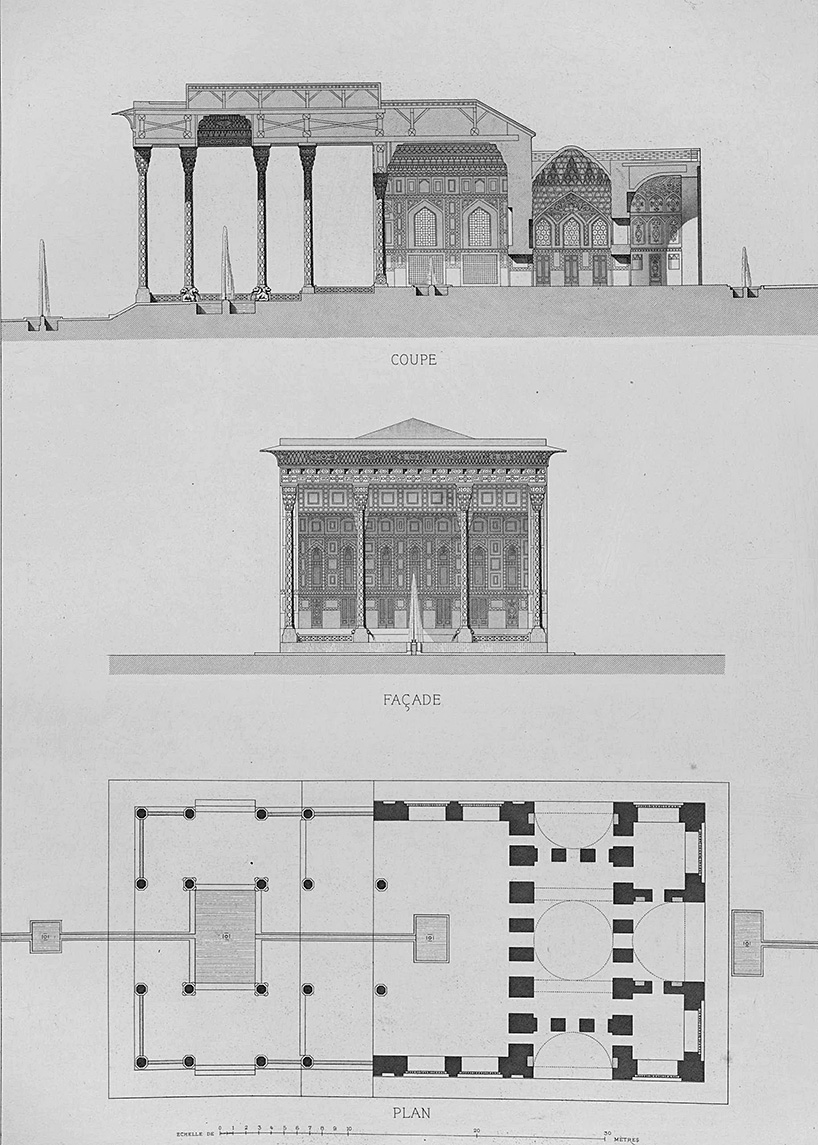 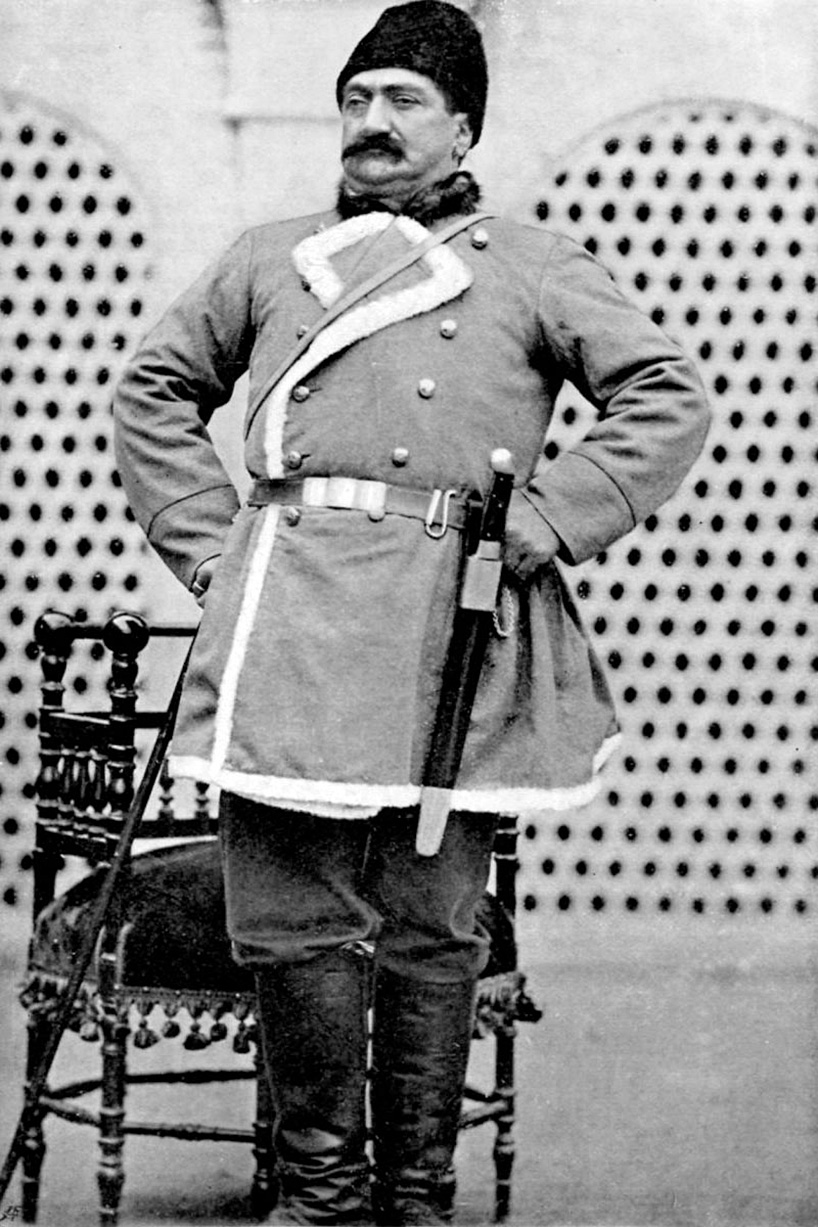 zello soltan, the governor of isfahan 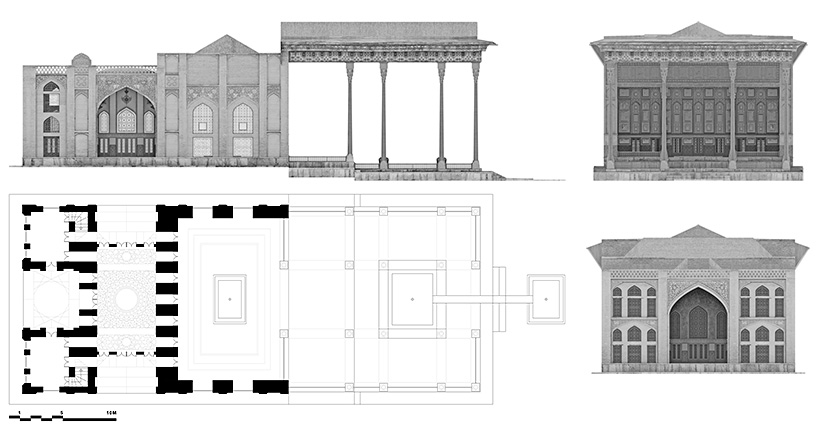 yazdirad.com
0
0
0
password recover
please insert your email below to reset your lost password
your new password has been sent to your email address
thanks for registering
please complete the form below. 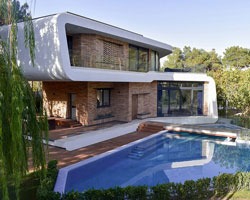 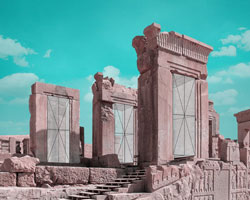 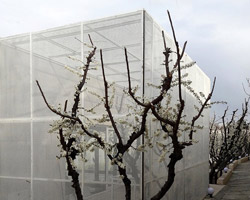 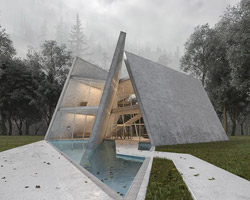 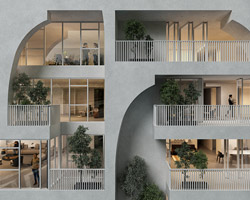