‘collaboratory’ is a year-round program that focuses on the joint work between monoambiente and three international institutions, with the objective of generating new networks, views, and theories about contemporary and experimental architecture from north to south america.

monoambiente invited three institutions to take over the space and to work and develop an exhibition of their choice that will generate a dialogue between the institutions, contemporary architecture and practices from north to south america. the invited institutions are: storefront for art and architecture (new york, usa), liga, espacio para arquitectura df, (mexico df, mexico), and the canadian center for architecture, (montreal, canada). the aim is to focus and challenge experimental architecture, creating new networks between all agents involved in the discipline. monoambiente constantly changes its stream of activities lead by participating institutions that host an exhibition or a public program of their choosing, engaging in groundbreaking architectural practice and discussing the role and relationship of institutions throughout america. 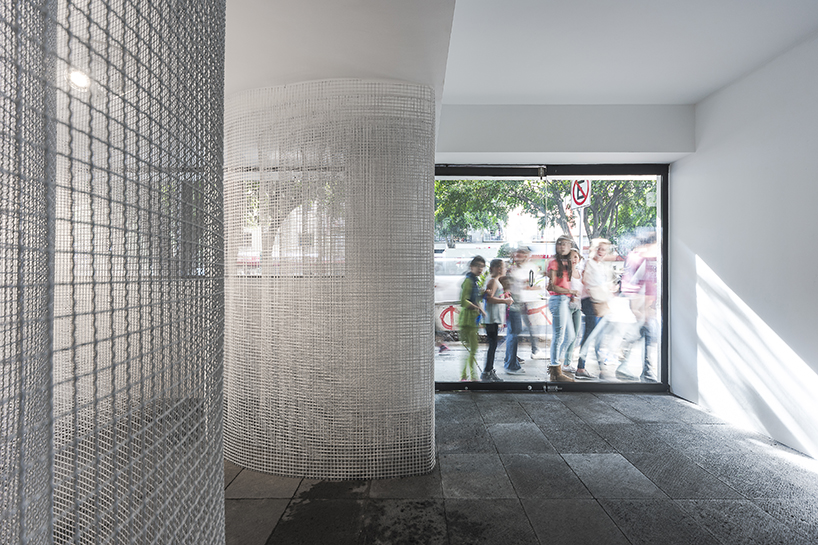 ‘una columna es un sistema’ (a column is a system) takes place simultaneously in two countries: mexico and argentina. monoambiente gallery, in buenos aires, hosts the first part of this exhibition starting from july 23, and LIGA inaugurated its section one week later. both works, by the architects from monterrey S-AR, simultaneously installed in two different hemispheres, present a single discourse that overlaps across a distance of 7,000 km. 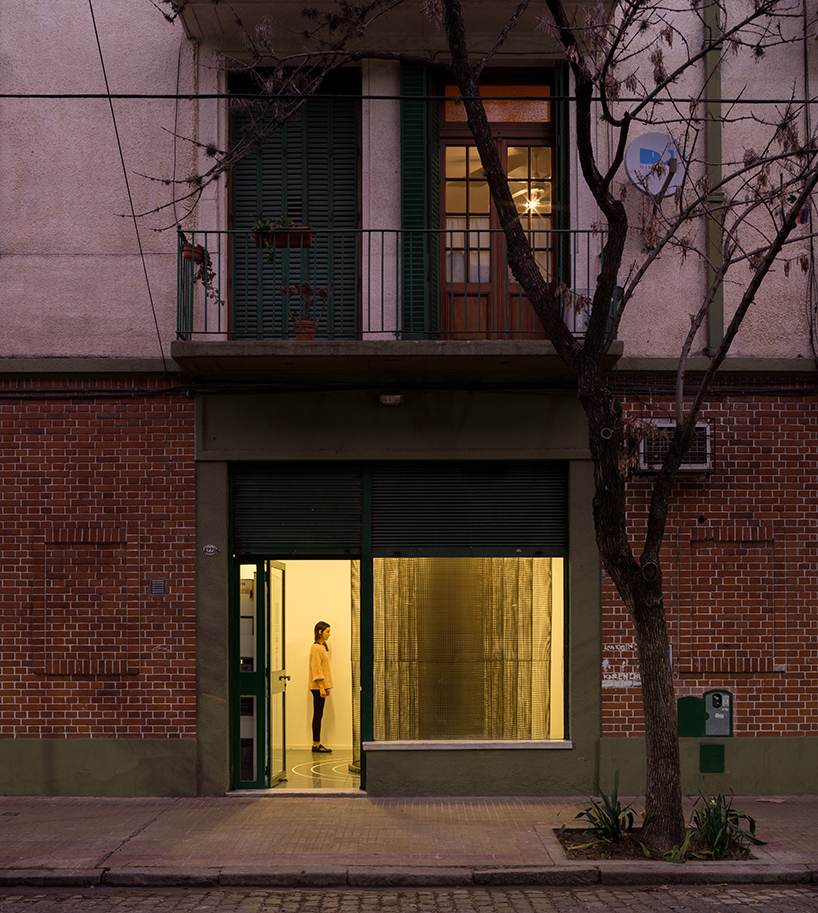 during the week prior to the opening at monoambiente, césar guerrero and ana cecilia garza from S-AR studio (mexico) held a three-day workshop at oficios asociados, an argentine architecture firm. the aim of the workshop was to generate practical knowledge and direct experience by means of a brief and self-constructed exercise. the topics addressed included construction, material, space, representation and interpretation, and self-supporting structures through experimentation with different materials, tools, and systems that join them. in the framework of the workshop and as a prelude to the opening of the show, S-AR held a public conference at monte 153C, a gathering place for architects and venue for study, debate and communication on topics related to architecture and urban studies envisioned as cultural practices (located in chacarita, monte 153C was founded by pablo gerson and florencia rodríguez, who are its directors).

the night before the opening, monte 153C also hosted a conference given by carlos bedoya ikeda and victor jaime from PRODUCTORA studio (mexico). participants in that event included LIGA and monoambiente in conversation with S-AR and adamo-faiden (argentina), firms that worked on both exhibition venues. 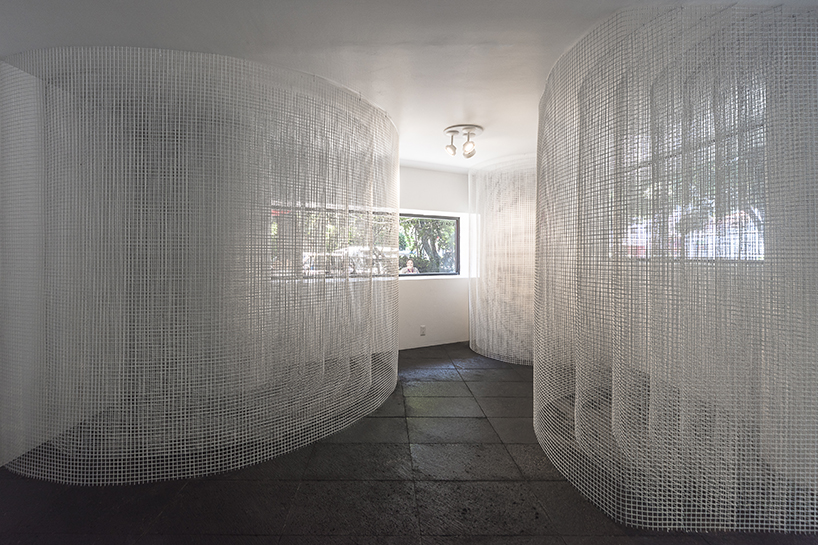 for its twenty-third edition, LIGA is to function as both host and guest at once, dealing with both aspects of the work of an architecture exhibition, at the request of the argentine gallery monoambiente, which is organizing the collaboratory. this curatorial experiment invites three institutions to develop a specific proposal for its space in buenos aires. as a result, storefront for art and architecture (united states), the canadian centre for architecture (canada) and LIGA, espacio para arquitectura, DF (mexico) are collaborating for the first time on a single project, with support from the Ggraham foundation (chicago), and in the process reinforcing the concept of a pan-american network.

spreading this net, the monterrey architects S-AR were caught up in it and accepted the challenge of a simultaneous intervention at LIGA and at monoambiente. to achieve this, the members of S-AR propose not an isolated piece, but a strategy applicable to each of the two spaces, and topologically equivalent in both cases. the connection is also established through the material—steel mesh—and in counterpoint, since the steel is left raw in one space and painted white in the other. while in LIGA the work runs around the perimeter of the space with its three columns, wrapping it from inside in successive, see-through layers, in monoambiente a single, imaginary, central column rises.

in both spaces, the overlapping meshes produce a moiré effect. this optical effect, perceived when two patterns of near-parallel lines overlap, occurs between meshes separated by just a few centimeters, but also between those that are thousands of kilometers apart, in two different hemispheres, conceptually superimposed from mexico city to buenos aires. 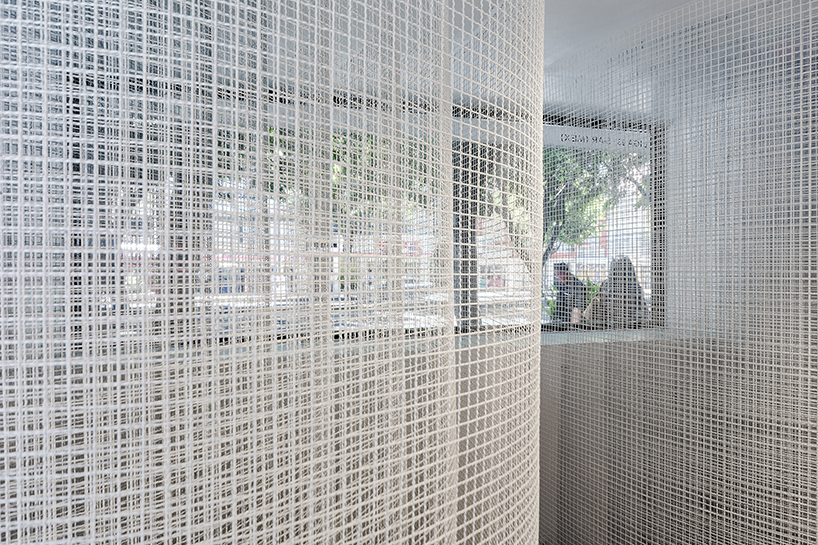 it is not an impossibility for an object to be both “here” and “there” at the same time. apparently, quantum physics can explain such a superimposition through the problem of measurement: as long as we are not observing a phenomenon, or measuring it, the smallest elements that make it up behave as they like and, if they seek to do so, could be in two places at once.

in buenos aires and in mexico two works that speak the same language are shown at the same time. in parallel, two objects redefine the space of each of the gallery spaces. the same strategy is deployed both here and there. we can only observe one of the two at any one moment, and a few small differences offer clues that it is not the same object. but the pieces connect in such a way that they generate an (im)material passage that links the two exhibition spaces which share a single mission.

thanks to the collaboration with LIGA, we have the opportunity to welcome S-AR, a mexican studio that grounds its work in research and experimentation, developing a new way of approaching architecture in each of their projects.

in its passage through monoambiente, S-AR leaves us with an intervention that seems to defy time and space with a game in which simultaneously and in a coordinated manner, over 7,000 km apart, they appear to form a complete work. one is not without the other, and vice versa. 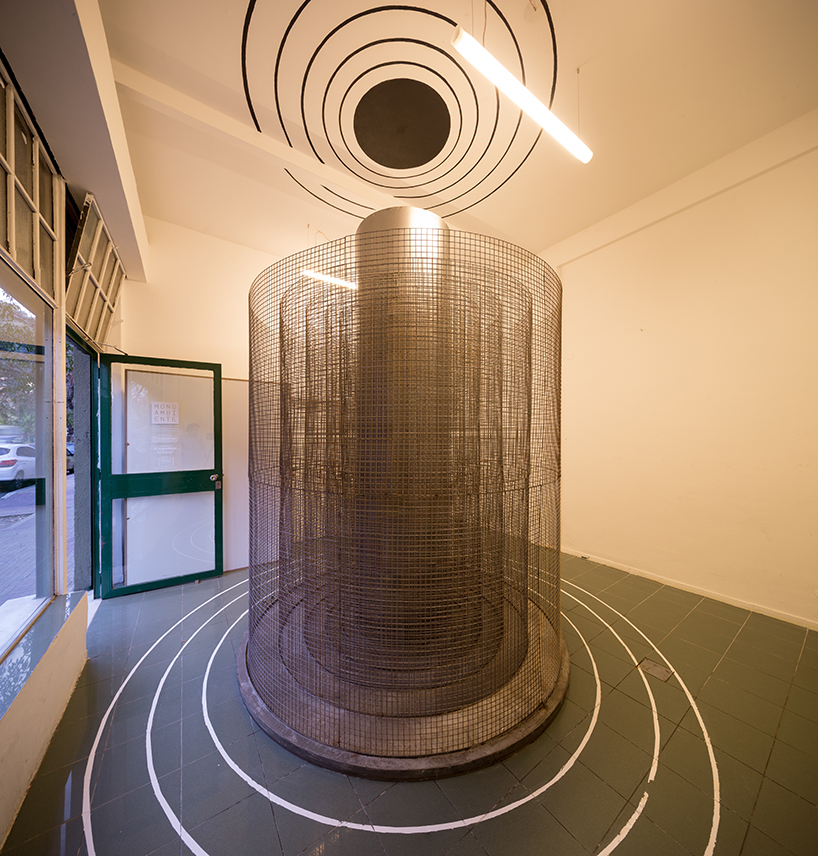 statement by S-AR
a column is a system

our proposed invention for monoambiente gallery is complementary to the piece we proposed for LIGA. because they will be exhibited at the same time, we are interested in formulating a dialogue between the two works—one based, at times, on contrast, at others, on the formal, spatial, or experiential relation, and at others still, on the materials used. the proposal is a reflection on the piece at LIGA —or perhaps a reflexive reaction to it— from a perspective that, though independent of the site in terms of form, material, and structural strategy, also engages the site, that is, assimilates LIGA as one space-gallery to Monoambiente, another space-gallery.

similarly, on the basis of a geometric reading of the structure of the space that gives rise to the LIGA proposal, we intend to transfer that structure and geometry virtually, completing it, making it whole or, at least, effecting that operation on one of its parts, specifically one of the three main columns in the LIGA space.

part of the proposal for LIGA, then, will be completed at monoambiente in a reflection on elements produced by means of an entire imaginary column embedded in the center of the monoambiente space on a platform that represents LIGA’s floor. the column will be surrounded by layers of concentric metal mesh that produce a visual experience like the one produced by the piece at LIGA. the limit is material, not visual, and activated by the viewer walking around the piece, which is a sort of dematerialized volume.

the color of the metal mesh at LIGA is light whereas the mesh at monoambiente will be dark. the effect is deepened at monoambiente where the column’s material is reflective, producing a visual labyrinth between object and viewer that expands the gallery space. drawings on the ceiling and floor of the monoambiente gallery further the idea of the virtual present and of the trace of the limits in dimension that relate the two spaces. 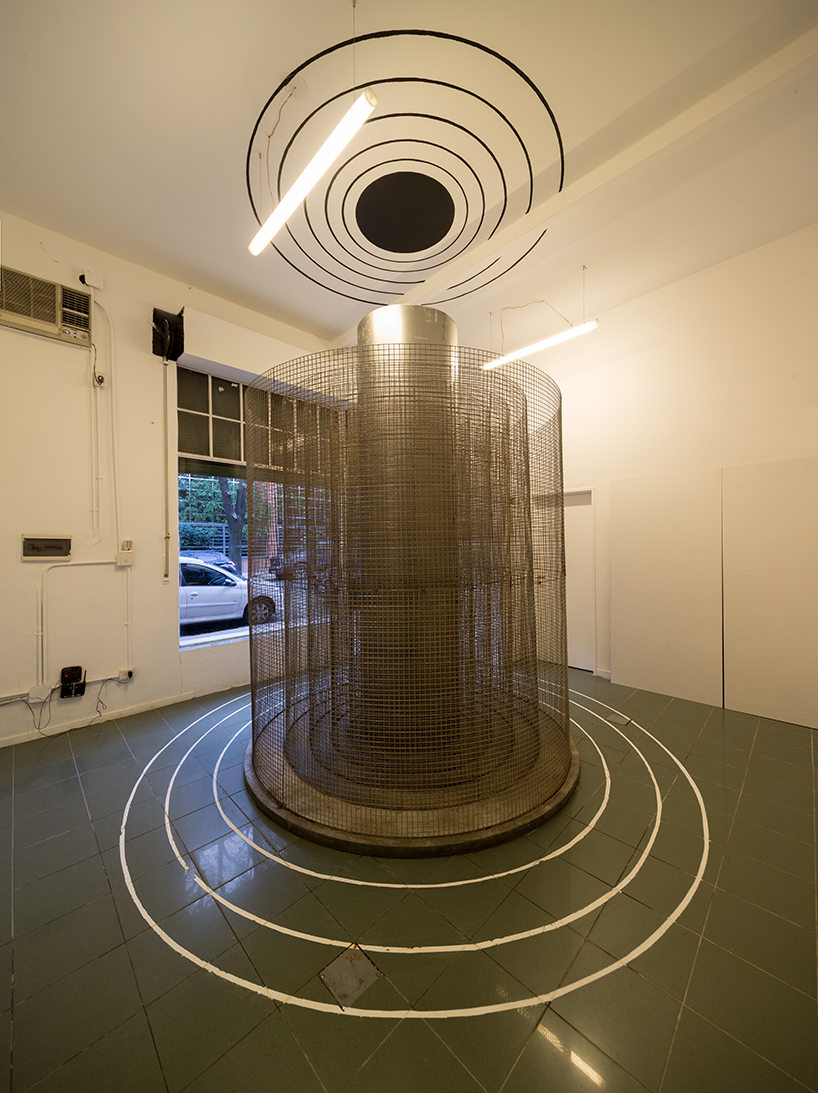 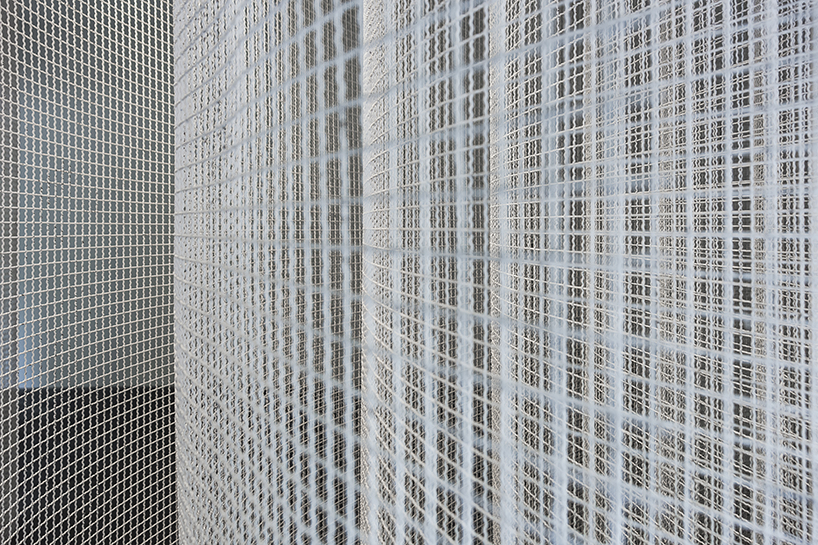 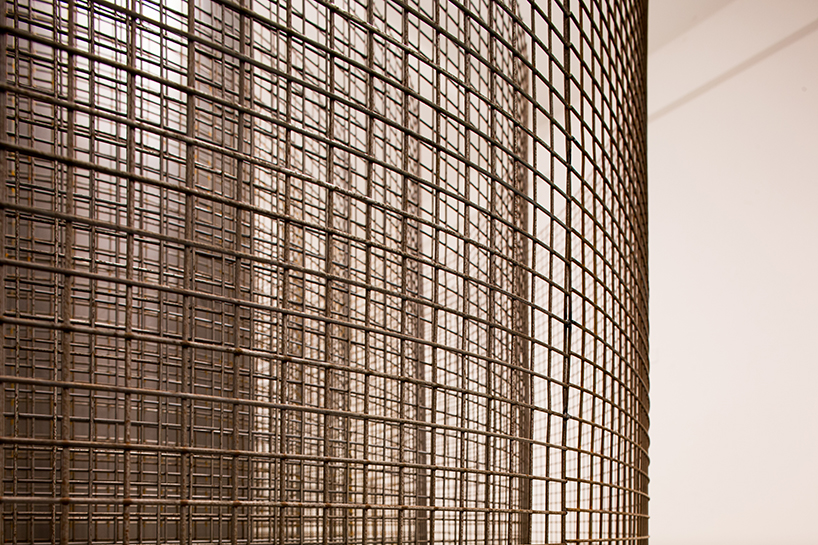 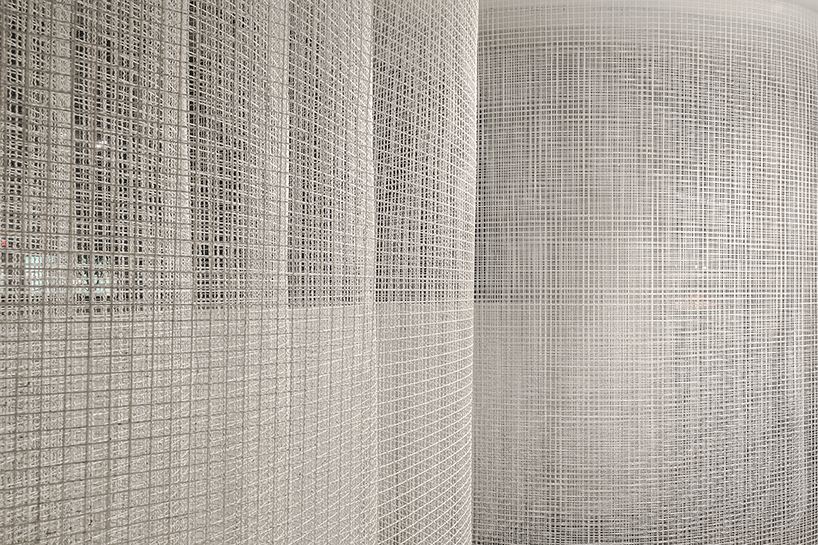