the flowing cloud township villa sits in qinglongwu, an ancient chinese village that is part of the fangyukongxiangsu cultural and creative complex. in 2017, more design office (MDO) was commissioned to renovate six existing village houses on the original site and transform them into guest houses. the design concept was to create a retreat outside the city for people to enjoy the history and material culture of qinglongwu and immerse themselves in nature. various cultural activities will ultimately take place there all year round.

on their first site visit, the architects were taken by the relationship between the existing houses and the landscape. the buildings sit in a valley close to each other, overlooking a bamboo forest, and are linked by a small cobbled street. ‘the houses have this great sense of aging; the old walls and windows tell the stories of the past through the marks and imperfections on their surfaces,‘ revealed MDO. 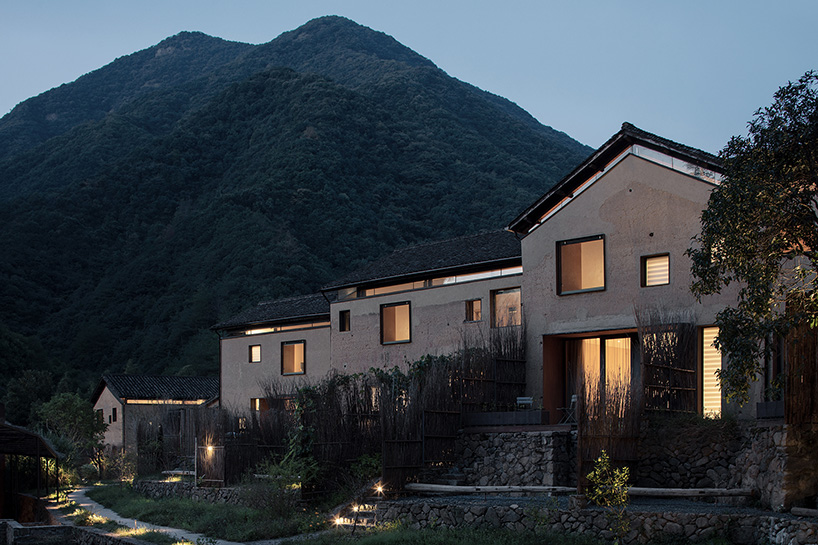 a gentle renovation that improves connection to the landscape

several challenges did arise while assessing the site. the existing architecture had a traditional timber structure which the MDO team wanted to preserve and adapt. however, the system and roof appeared too weak and damaged to be retained on closer inspection. even more, the existing windows were tiny, creating a dark and gloomy internal environment that blocked any real visual connection to the bamboo forest.

responding to those observations, the design of the flowing cloud township villa took on a sensitive approach that gently improved connection to nature. where possible, the team retained the existing walls, windows, and doors, repairing them with the help of local artisans. to fix the roof, a new steel structure was built inside the existing walls. the result is a new roofing volume lifted upwards to create a more generous ceiling height. for the interiors, new elements sit as independent objects that offer guests a clear read of old versus new. 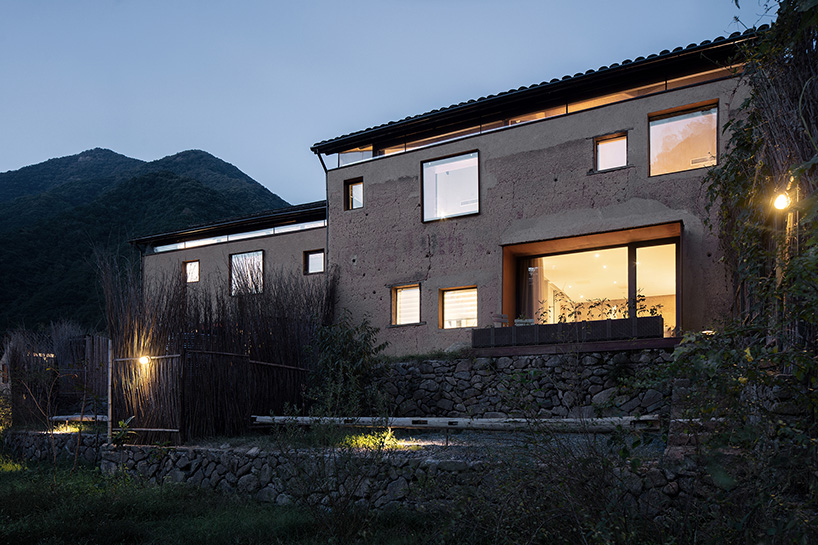 ‘away from the hustle and bustle of the city, we hope that our guests can experience the changing rhythm of the four seasons’. to improve internal daylight and adequately experience the happenings of the outdoors, MDO introduced new windows finished in thin metal frames. additionally, the placement of these new windows was done to frame the landscape from certain positions: catching a view from the bed and sofa or getting a glimpse of the valley while showering. as such, the landscape is treated almost like a painting. 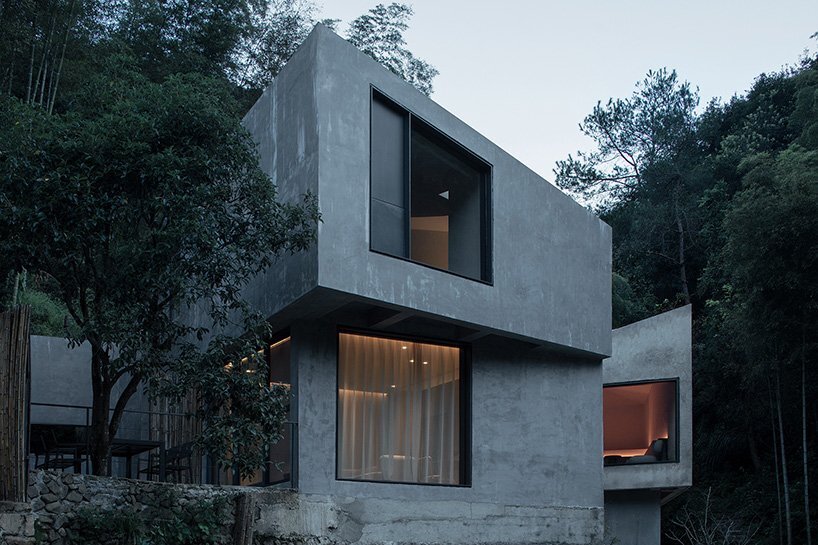 since two of the houses could not be repaired, MDO erected two new building close to the mountain route. these new volumes carry recreational functions such as reception and bar areas. their architectural form features rough concrete façades that reference a rock exposed from the hillside. such choice of material sharply contrasts the traditional rammed earth of other village buildings. ‘here, we recommend facing materials that can be integrated with nature, bearing the influence of rain, sunlight, and snow, and adding natural patina to the facade. this means that within a few years, the exterior wall will become a part of nature, blurring the boundary between architecture and nature,’ said the team.

finally, the traditional lantern culture became the inspiration and starting point of the new buildings’ lighting design: no matter what direction people approach, the modern monoliths welcome them in. that said, the architects resorted to changing light colors to suggest a change in spatial function and atmosphere. 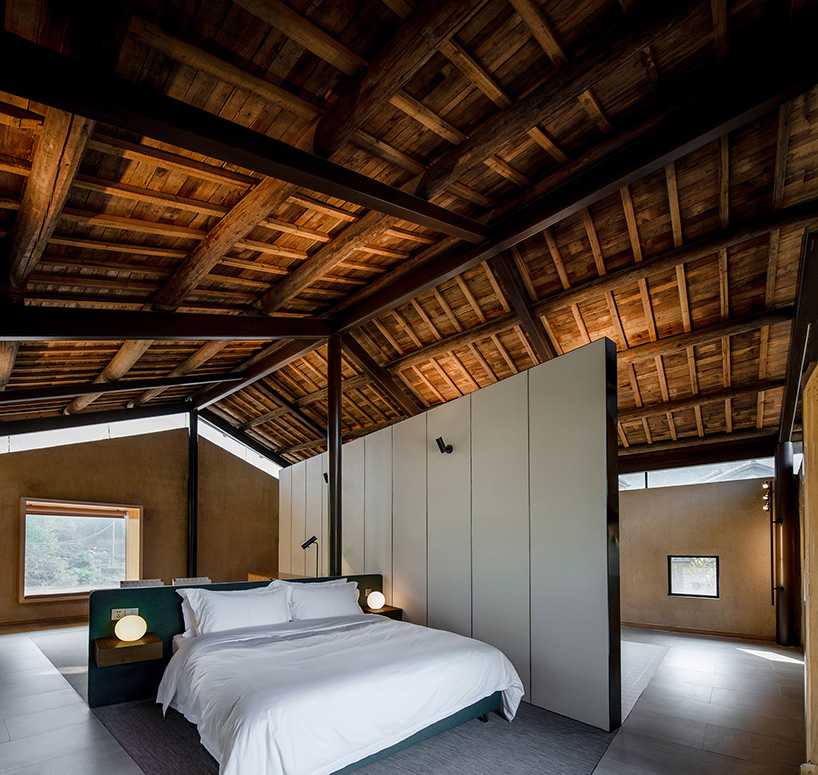 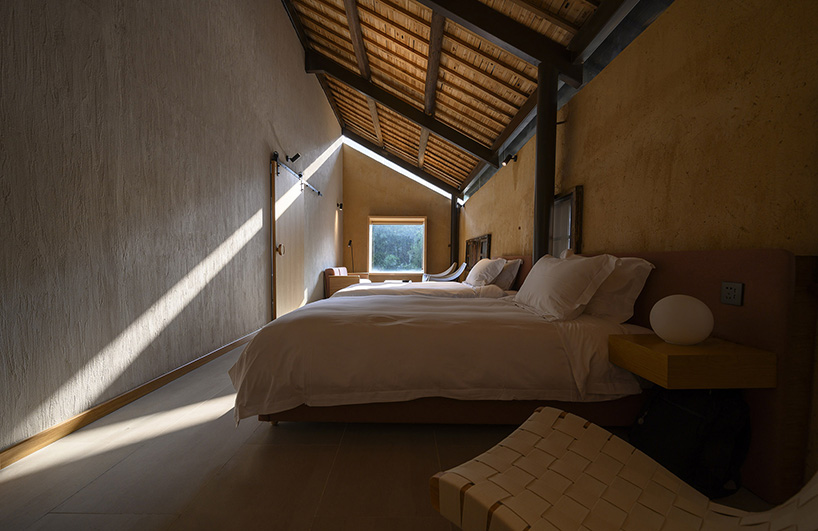 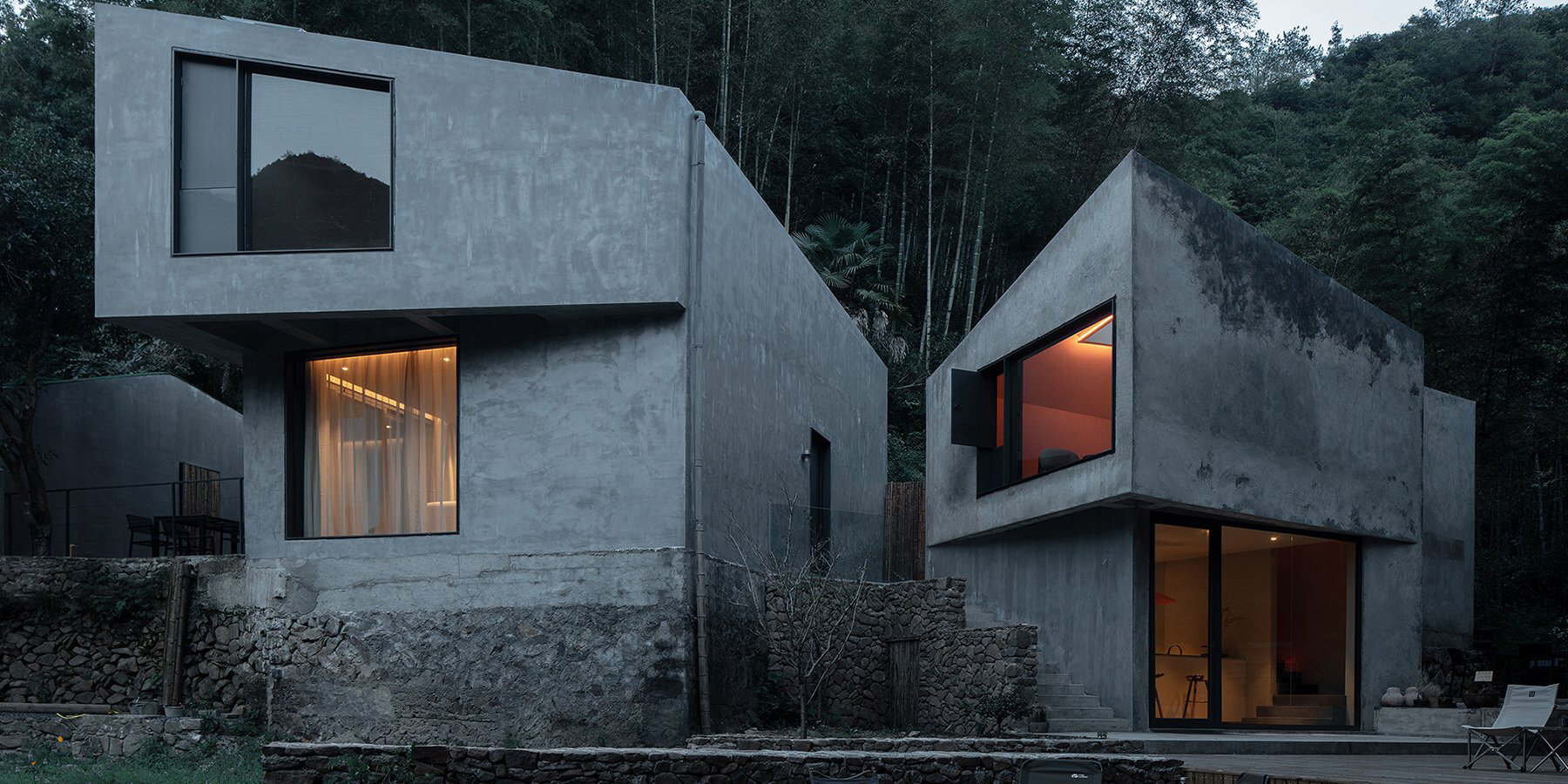 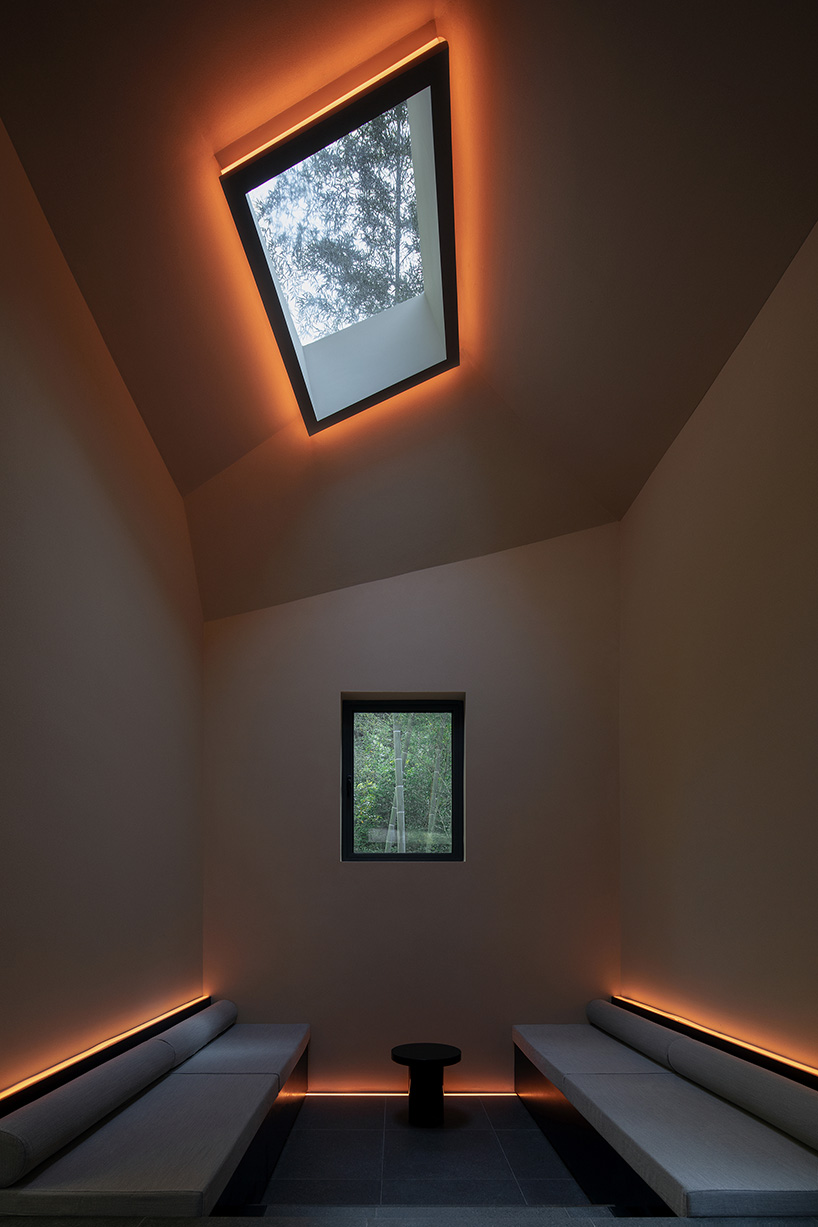 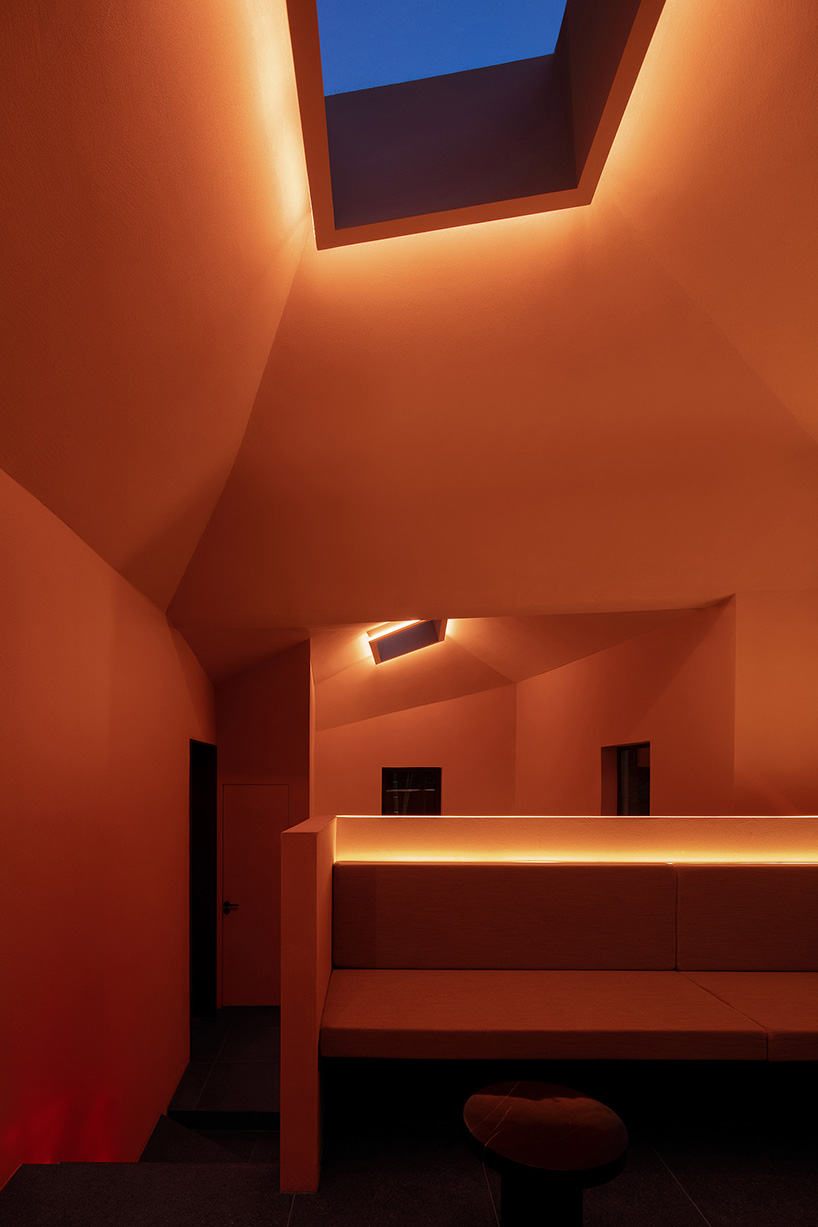 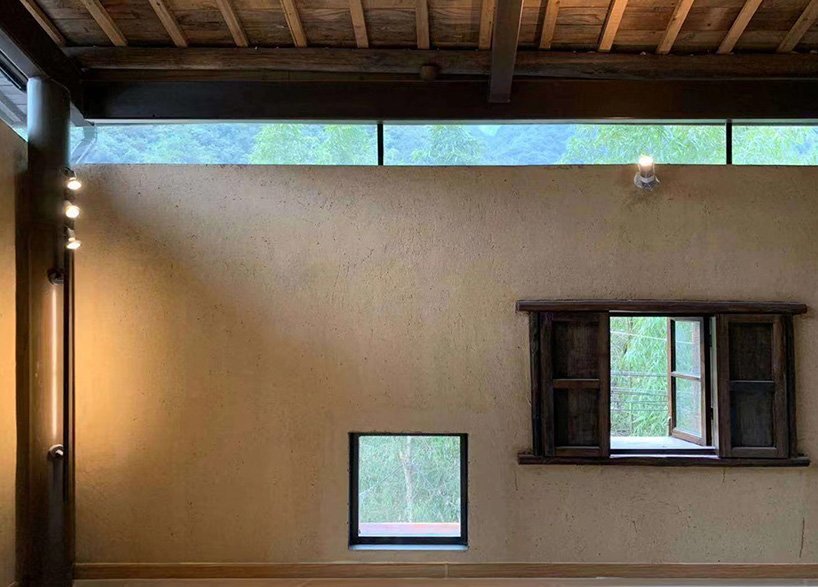 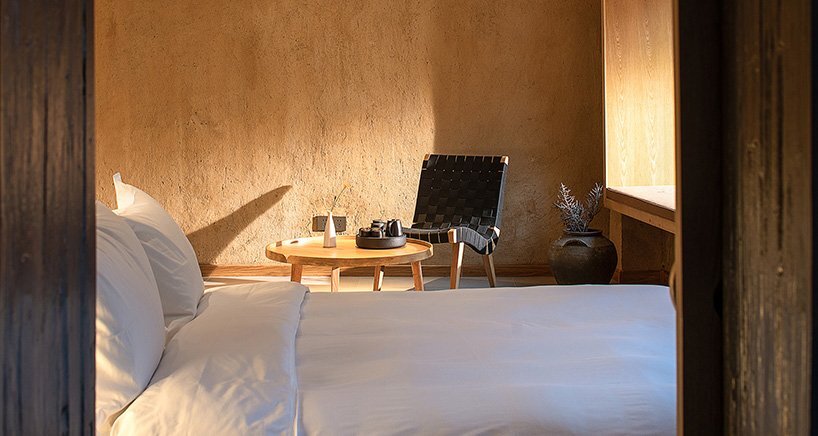 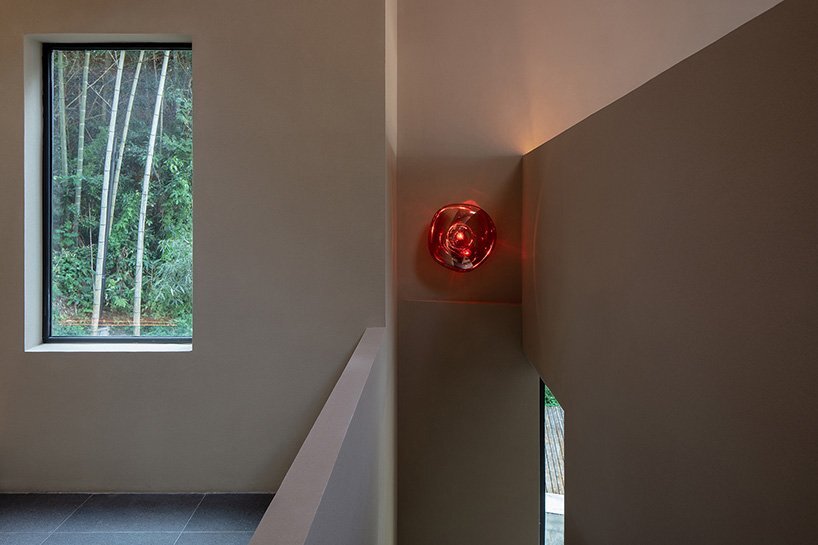 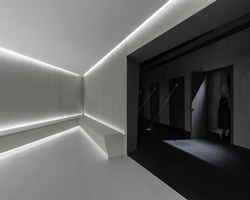 Aug 12, 2017
more design office's jianliju theater is alive with drama due to its film noir atmosphere