the ‘jianliju theater‘ offers a unique experience where the audience plays an integral part of their performances and productions. their new premises in shanghai demand a careful architectural approach to the relationship between space, event and movement. the architects from more design office have addressed these conditions with a deliberate and exaggerated exploration of form, lighting and circulation. the practice has taken the cinematic expression of film noir and applied its heightened sense of drama to the atmosphere within to create a sequence of contrasting spaces that read as a montage of screenshots from a film roll. 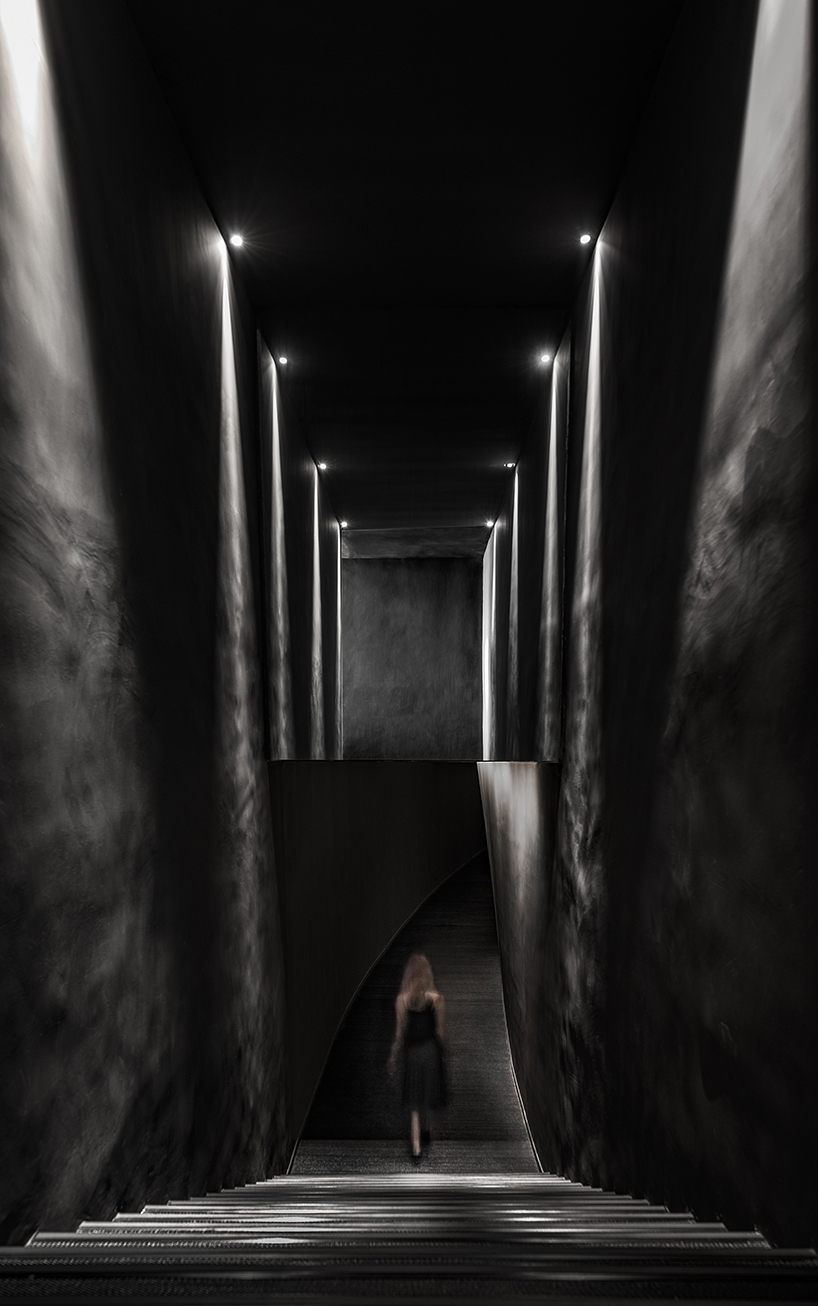 the entrance leading off the street down into theater

the shanghai based practice more design office employs bernand tschumi‘s 1976 ‘screenplays‘ theoretical project to reference the parallels with screen editing and the time-space nature of architecture. tools such as distortion, repetition and superimposition often used by the great directors of the film noir scene have all been applied as a method to soak the interior with all the atmosphere of a 50’s hollywood melodrama. 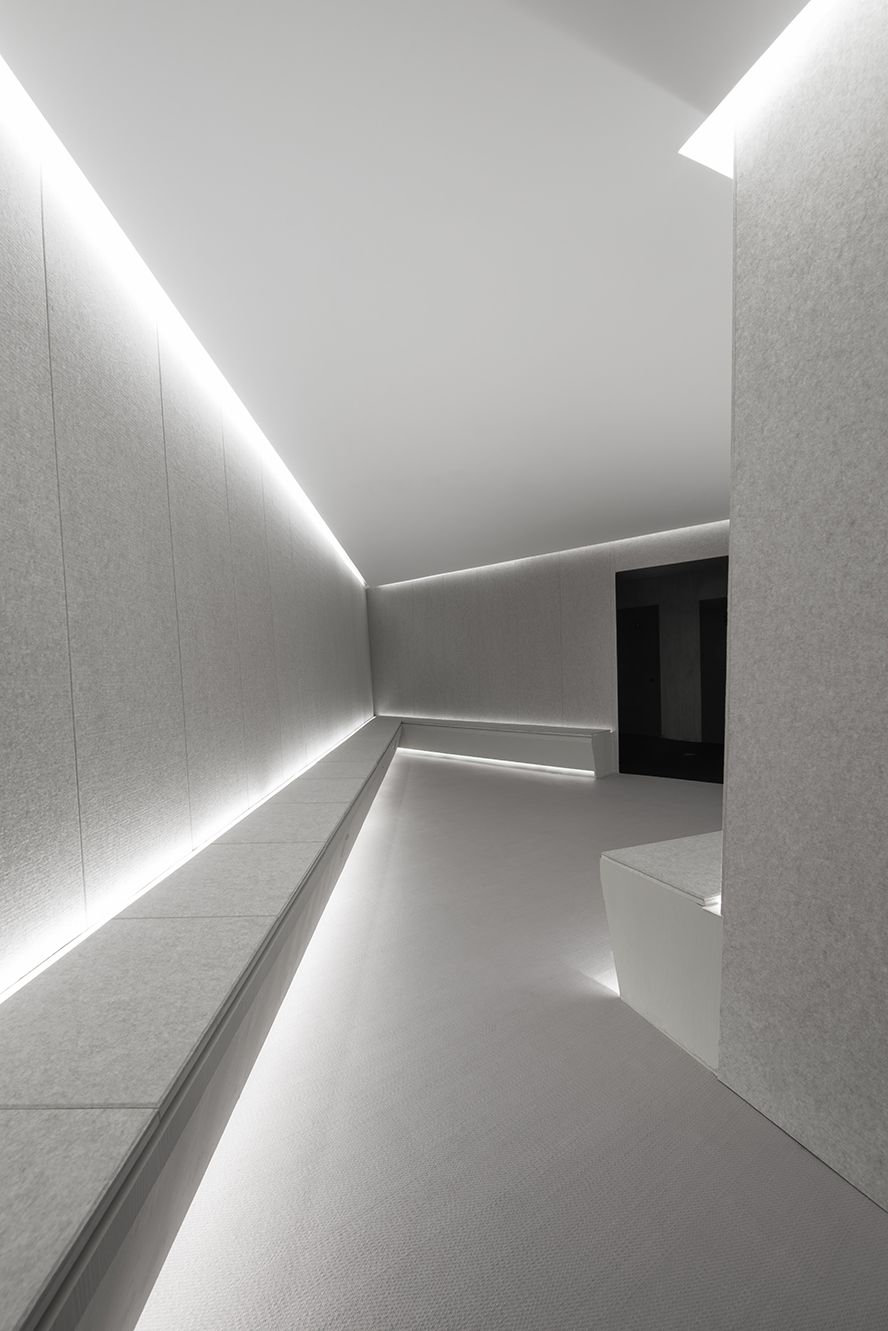 the waiting room; a calm and gently lit space where people can meet their fellow characters

the ‘jianliju theater’ is accessed off a nondescript side-street in central shanghai with the entrance door hidden at the back of an antique furniture emporium. visitors arrive only with a time, location and number. from the door a stair leads down into the darkness and from there the circulation seeks to create a sense of departure from the world outside, a deliberate act of disorientation initiated by a dark curved corridor that emphasizes low-key lighting and unbalanced compositions leads to the spaces inside. the functions are organized into a linear arrangement of spaces, where the visitor is prevented from going backwards, as if following an unknown figure through the street at night. 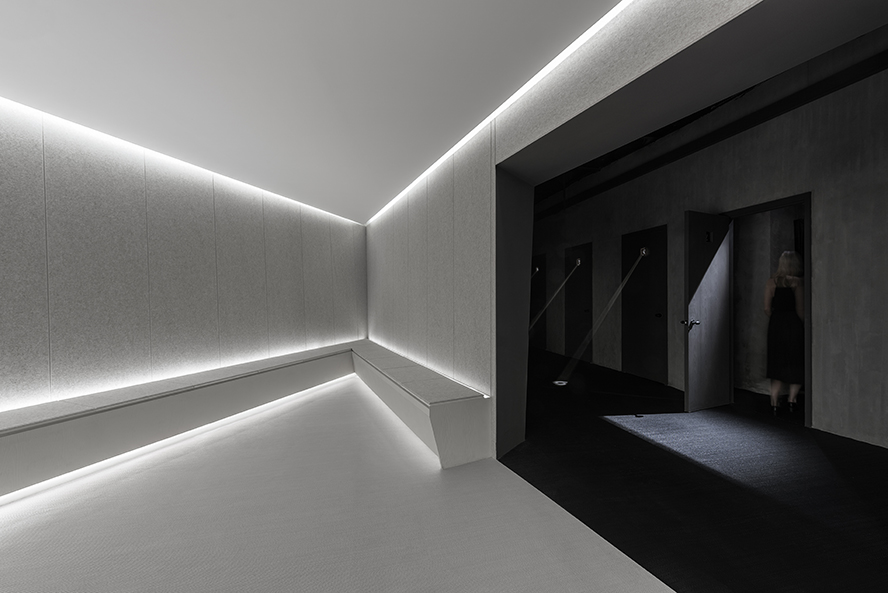 from a lightened space to the dark corridor

more design office’s ‘jianliju theater’ is simple, monotone and minimal with a hint at the texture of the plaster that gives lustre and depth to the spaces. in contrast to the doorway sequence, the lobby is bright and lined with acoustic paneling on the walls and benches creating a closed and soft environment, a moment of respite before the performance begins and the drama is further heightened. 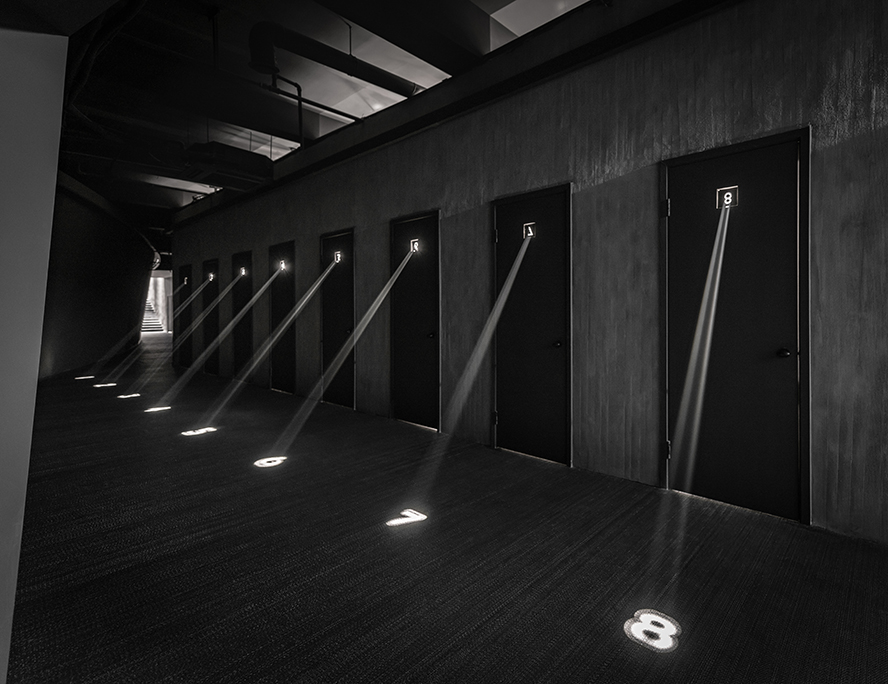 when the show is ready to begin, lights appear on the floor showing the audience which door to enter

when it is time, each participant in the production enters a small changing space, highlighted by an ghostly number projected from a pinhole aperture on to the dark corridor floor. here in a space reminiscent of a lynch production set complete with heavy velvet curtains, they are provided with a script and transform into character. participants emerge from a costume change into a small anti-chamber where the four enclosing walls are asymmetrical, an unsettling space where the main focus is on a number displayed through a magnifying glass giving stage directions to the participating actors waiting in anticipation. 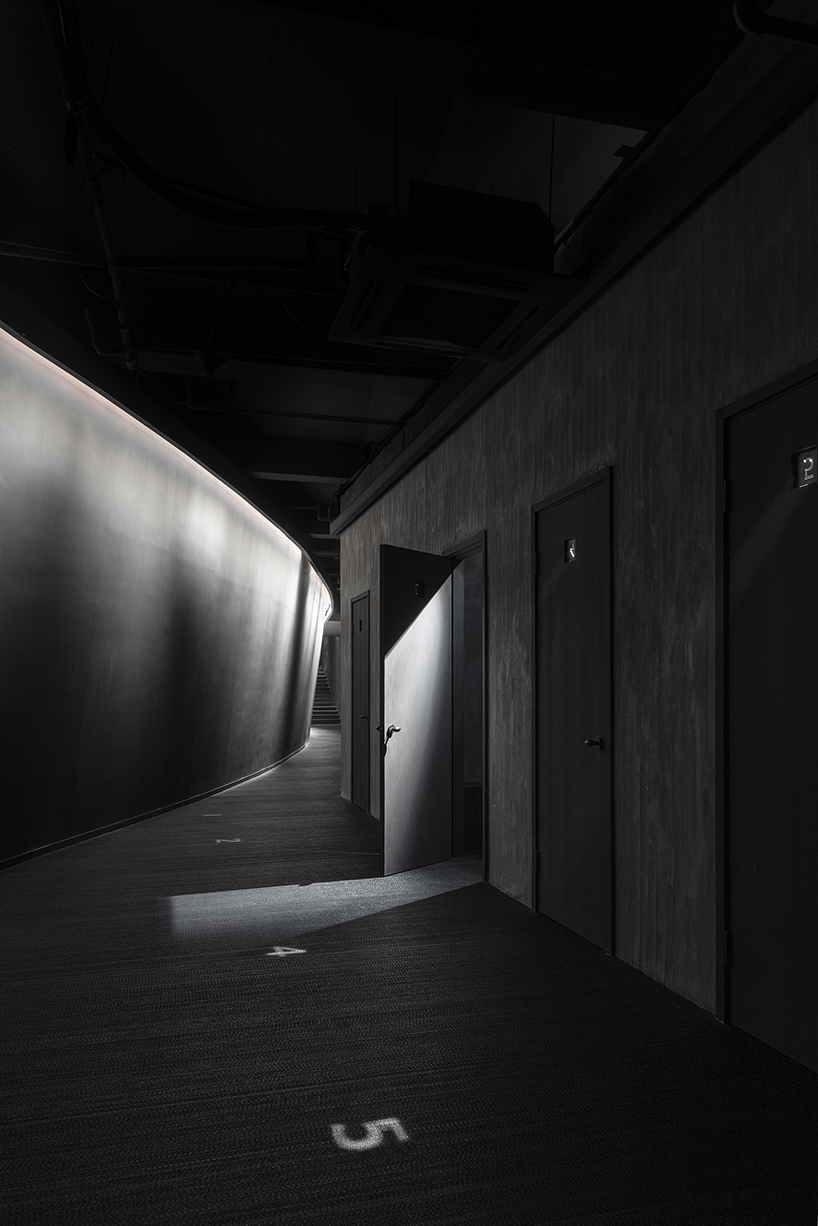 the door leading to the changing room, where the audience transforms into their character for the night

after the show concludes the sequence finishes with a hall of mirrors, one final signal to the film roll and the cinematic traditions that their design engages with. given this final space is predominantly used for photographs and selfies, their last note is intentionally witty, a critical reflection perhaps on the ambiguous relationship between actor and audience that their architecture has curated throughout. 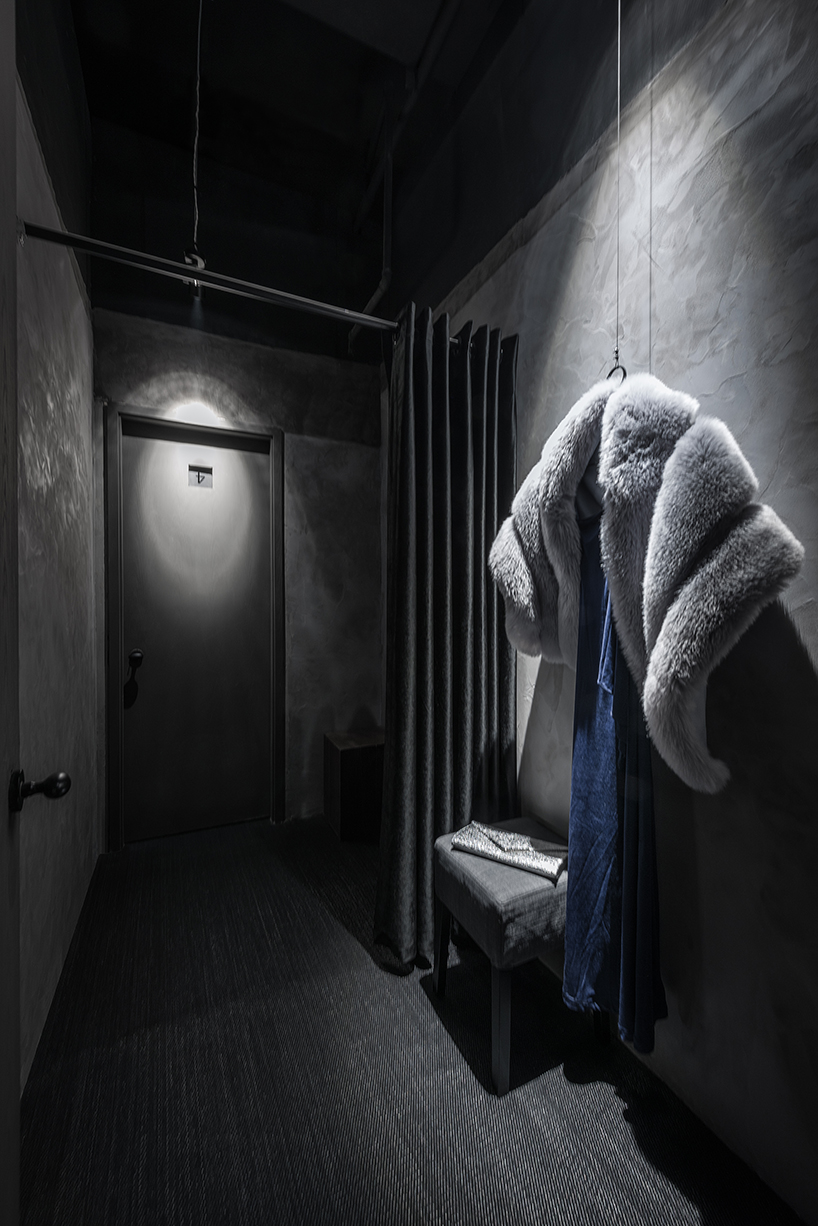 inside the changing area, each character has a space to read their script and a costume to change into 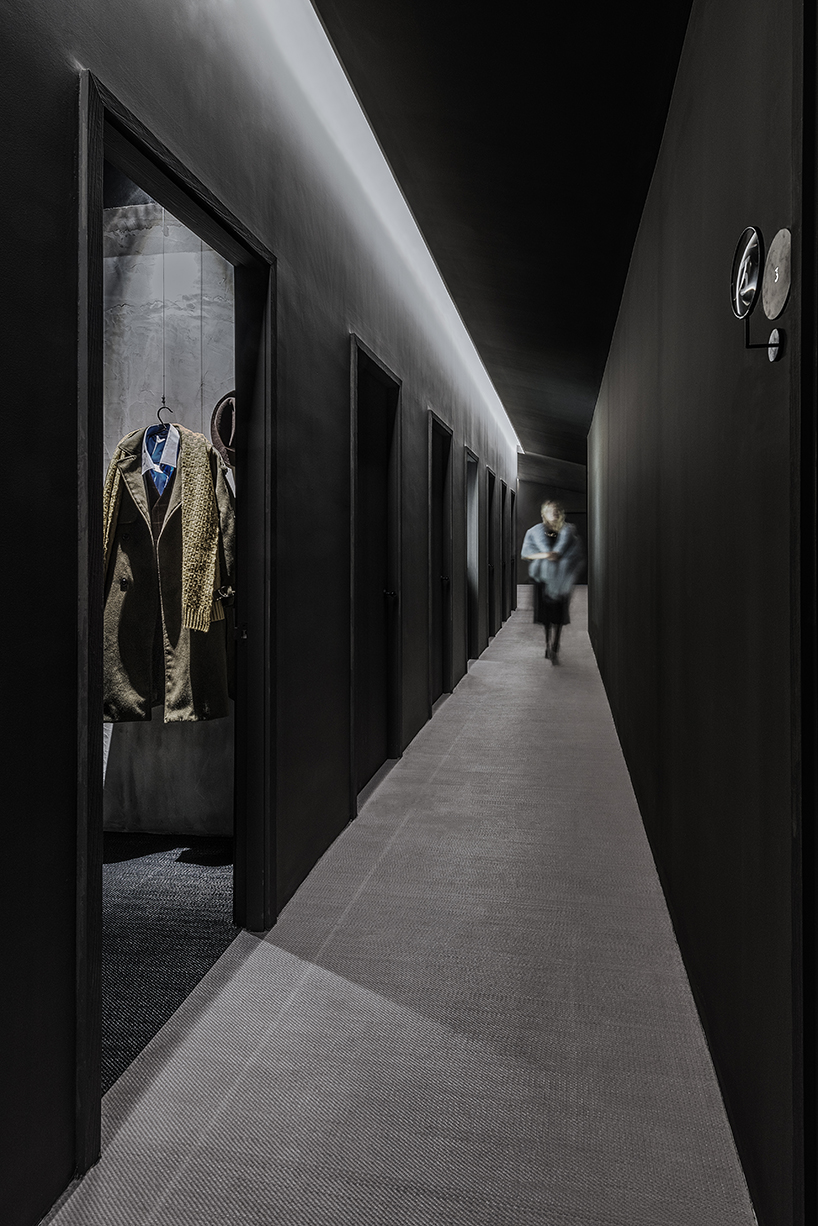 transformed into character, the audience heads towards the theater 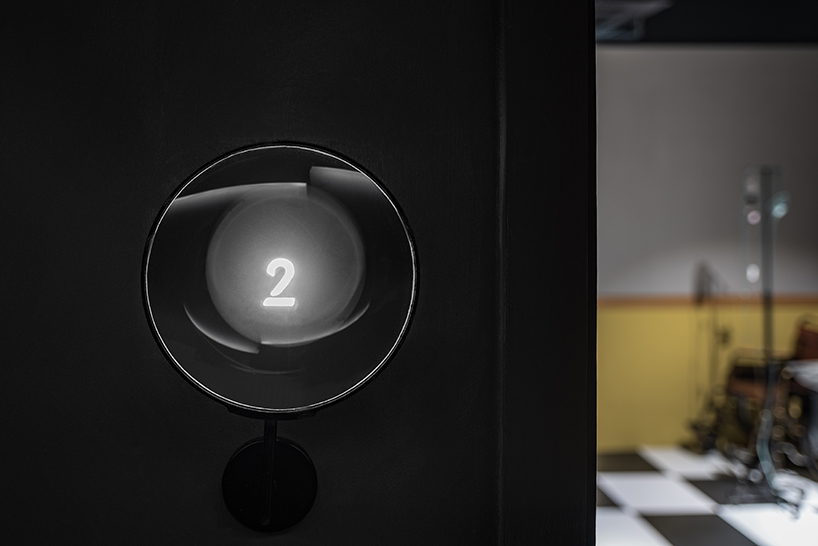 in a signal to the theme, a magnifying glass highlights the theater entrance 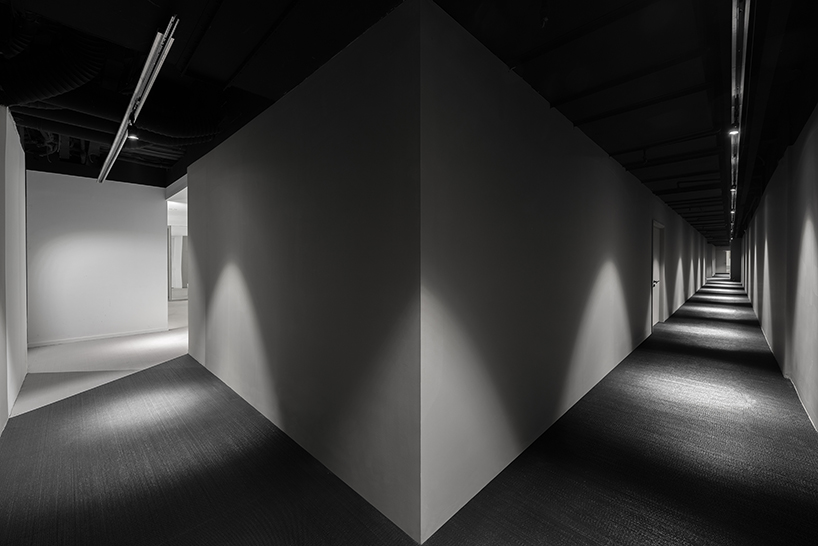 the directions through the space are painted with light 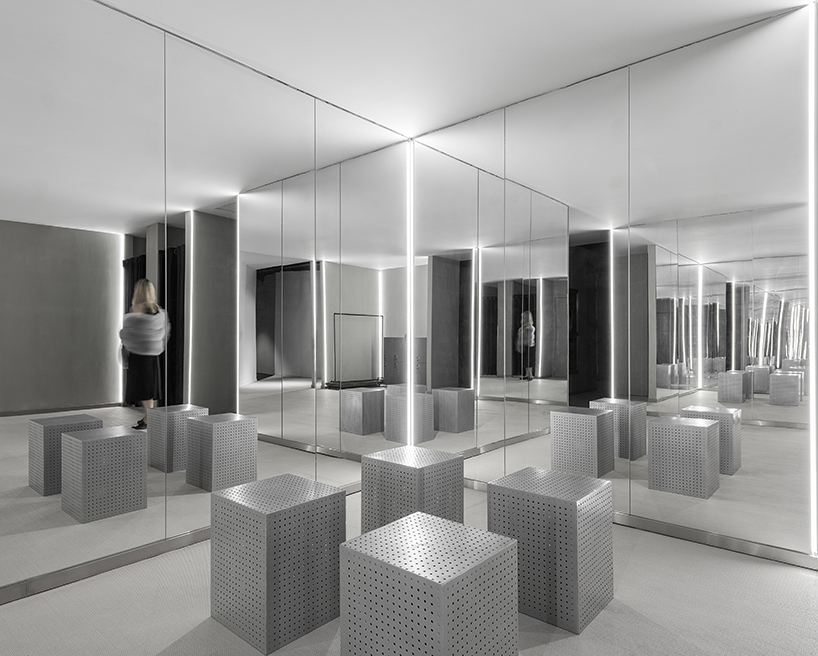 everyone loves a selfie; the final space is where the audience can disclose 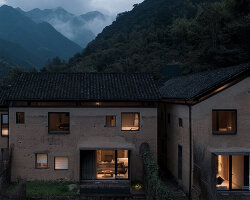