grand paris – collection of program to be added until 2030 – 2035. in the MVRDV vision this volume is spread over the space available for transformation. image © MVRDV

yesterday winy maas presented MVRDV’s vision for greater paris 2030 to the economic and social council of france. the project ‘paris plus petit’ by MVRDV in collaboration with ACS and AAF is one of ten proposals by international architecture and urbanism teams to envision the future of the french capital and its vast agglomeration. the urban challenge has been commissioned by nicolas sarkozy, president of france.

MVRDV ‘paris plus petit’ project is represented in four parts: the ‘synthesis’, the ‘city calculator©’, the ‘data’ and the ‘observation’.

the synthesis defines the spatial agenda for the city, based on ambitious and responsible strategies for the french capital. it is the core of the response and proposes a series of 17 large scale interventions that are based on an analysis of the city’s fabric, its future programmatic needs and spatial possibilities. the proposals are interventions based on available space and feasible. among them the ambition to make paris highly accessible: the creation of a grand central station at the location of les halles, underground densification of the boulevard périphérique by adding a metro line and two underground motorways ring-roads, the creation of new grand axe’s and a subterranean infrastructure band along the seine. the space liberated by the buried infrastructure is used for a housing program that allows for urban living in pleasant and green environments. further parts of the vision are investments into transport, nature, education, culture, social cohesion and vast amounts of renewable energy. the sum of all projects can avoid future sprawl and radically transform paris into one of the densest, most compact and therefore sustainable high quality cities in the world: ‘paris plus petit’.

the city calculator© is a proposed demo version of a potential software and possible webtool, which quantifies the ‘behaviour and performance’ of a city and makes it comparable to others. it connects qualitative to quantitative parameters. it can be used as a public and planning tool to support sustainable planning. the city calculator© will be conceived in collaboration, by the why factory at delft university of technology.

the data gives the overview of the detailed research on the functioning and performance of greater paris, which has been the background for the spatial proposals.

the observations are a series of articles on the backgrounds, the history, the potentials and the problems of the french metropolis. 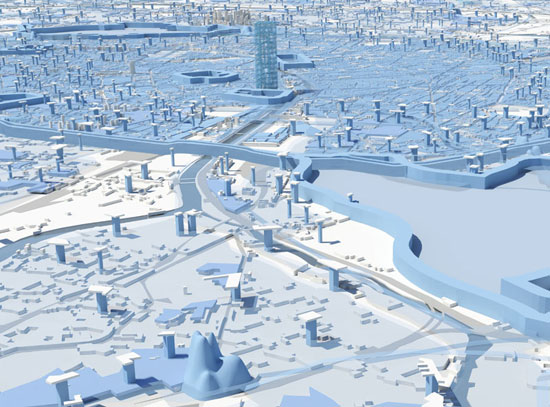 grand paris – overview of paris with all possible interventions. the sum of the interventions is 350% of the needed built program, therefore in the blue circle the intensification zone which addresses the need for new program until 2030, resulting in a more compact city. image © MVRDV 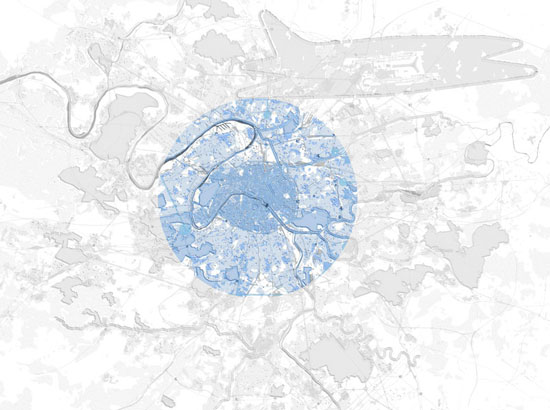