in the netherlands, MVRDV has revealed plans to build two individual towers that, between them, contain more than 500 apartments. located in the hague’s central business district, the 61,800 square meter-scheme will offer high quality social housing and private accommodations. the development is crowned with large outdoor spaces that offer views of the sea to the north, and the skyline of rotterdam to the south. work on the ‘grotius towers’ is set to get underway in 2018. 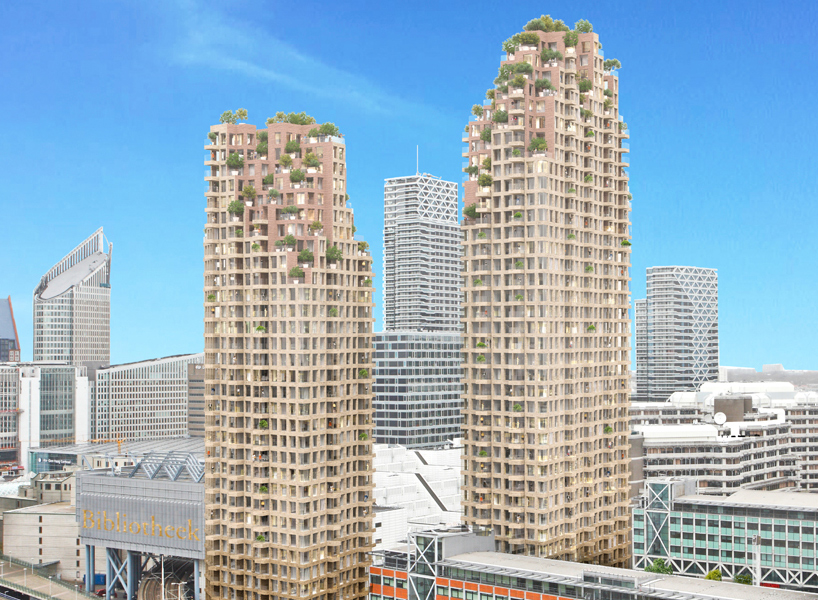 between them, the towers contain more than 500 apartments / images courtesy of MVRDV

the taller ‘grotius I’ tower is a long and slender volume with an elongated façade, while ‘grotius II’ is more compact, forming a close relationship with the neighboring block and street. MVRDV’s design, which was revealed in collaboration with developers provast, includes ground floor commercial plinths that form active social spaces for shopping, dining, and socializing. the façades of both towers will be realized in natural stone, with bases that feature a color gradient changing from beige to darker hues. at their peaks, both structures have been designed to ‘evaporate’ into a crown of greenery-filled terraces.

each apartment boasts extra-large windows that afford generous views and natural light, while all units have their own private outdoor spaces. in an attempt to establish a closer connection with nature, the terraces on the upper levels feature distinct wood façades and greenery. in contrast, the lower floors have internal balconies in order to ensure additional privacy for residents near street level.