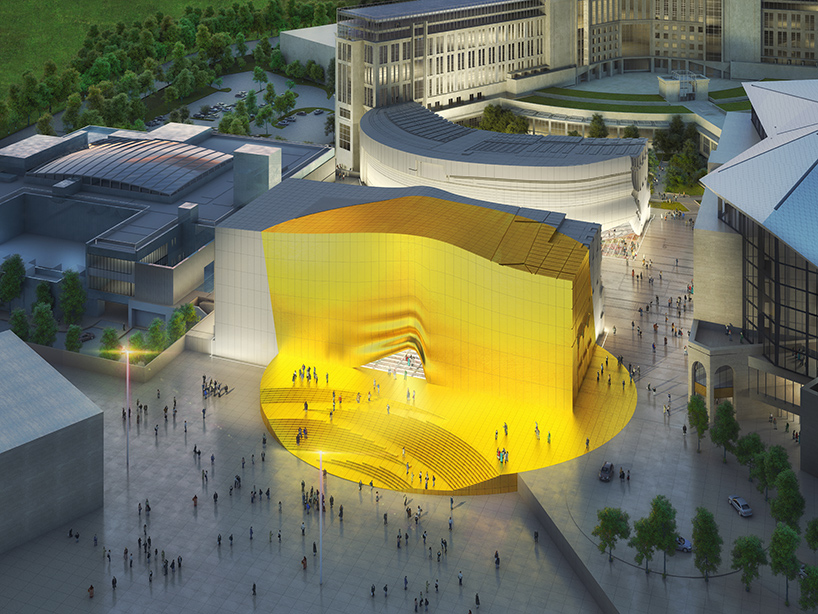 MVRDV has unveiled plans for ‘paradise city’, a 9,800 square meter entertainment plaza that forms part of a larger tourist hub just 10 minutes from seoul’s incheon airport in south korea. the development comprises two buildings — the ‘sandbox’ and the ‘nightclub’ — which contain retail outlets and entertainment amenities respectively. conceived as an ‘echo of its surroundings’, the scheme takes its profile from the neighboring urban landscape. a public square, marked by a giant golden spot, has been designed as a beacon to those flying into the city. 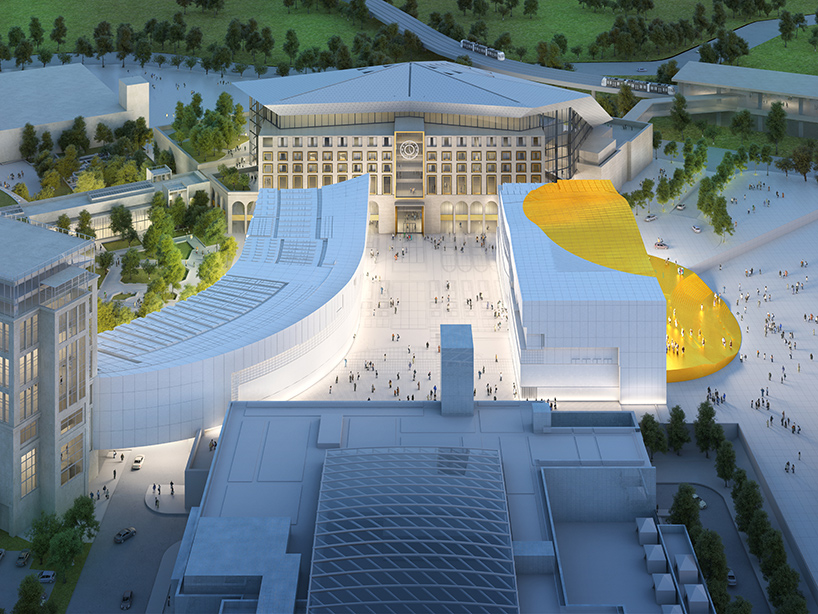 undertaken in partnership with gansam architects, the brief required that MVRDV’s monolithic forms had no visible windows, concealing the introverted shopping center and nightclub. therefore — in order to develop an engaging façade — the design team sought to mirror the buildings’ context, connecting them formally to the urban plan. as a result, the massive concrete structures are manipulated and distorted, taking on a more fluid aesthetic. 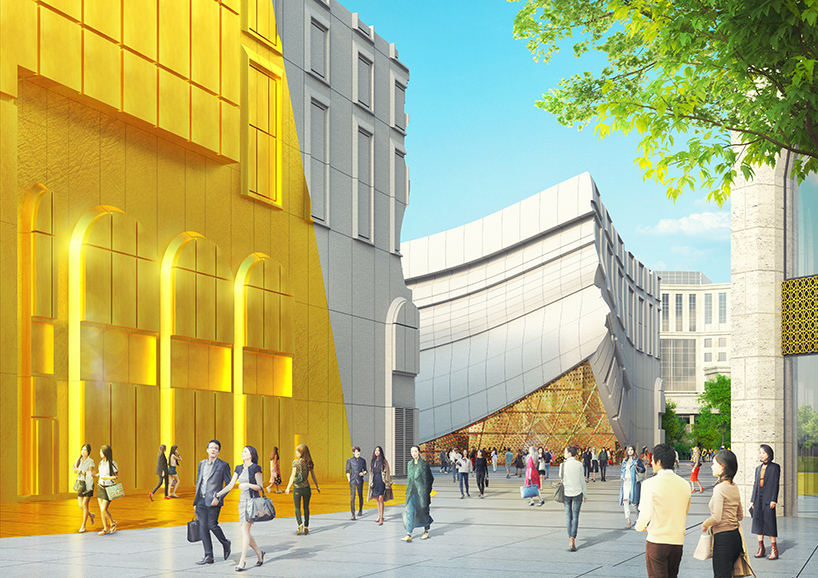 the two monolithic forms have no visible windows

‘the project takes two simple volumes, which create a new urban space,’ explains MVRDV co-founder winy maas. ‘these masses then take an imprint of the facades around the site, stretching over the two buildings. thus adapting themselves to the given environment, accepting these conditions as a sine qua non. the buildings are opened by lifting them like a curtain, unraveling their interior. then, to top it off is the golden spot, marking the entrance like a sunbeam, making its presence known even from the air and the landing planes at incheon airport.’ 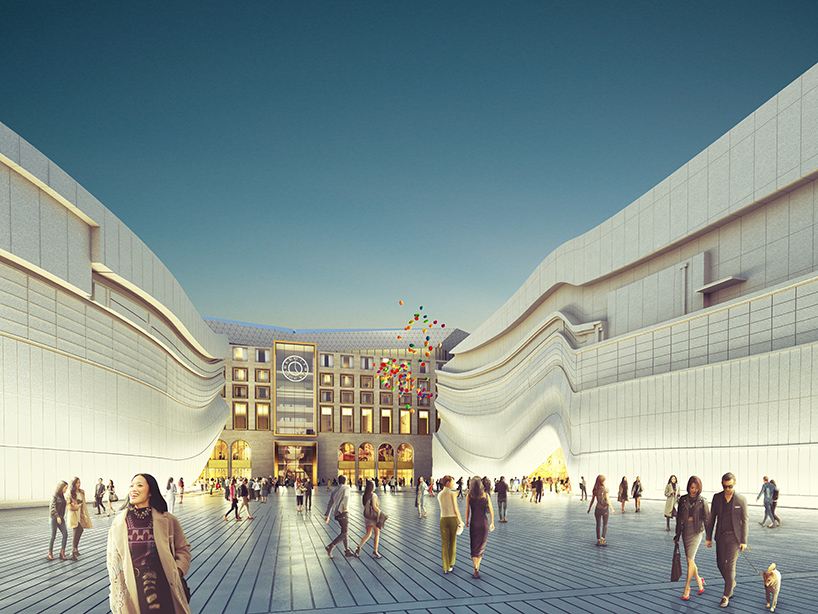 a central plaza is established at the center of the scheme

the 3,600 square meter ‘sandbox’ retail complex, sweeps around to connect to the adjacent casino and offers direct access to visitors. meanwhile, the nightclub sits next door, maintaining its rectilinear position. the building also hosts a water club and sky-garden on its upper floor. party-goers are led into the structure via a golden tribune. the urban platform of paradise city is raised, sitting above service spaces and an underground parking garage. internally, glass floors reveal the scheme’s inner-workings, highlighting the exits and entries of a site in a constant state of transition. 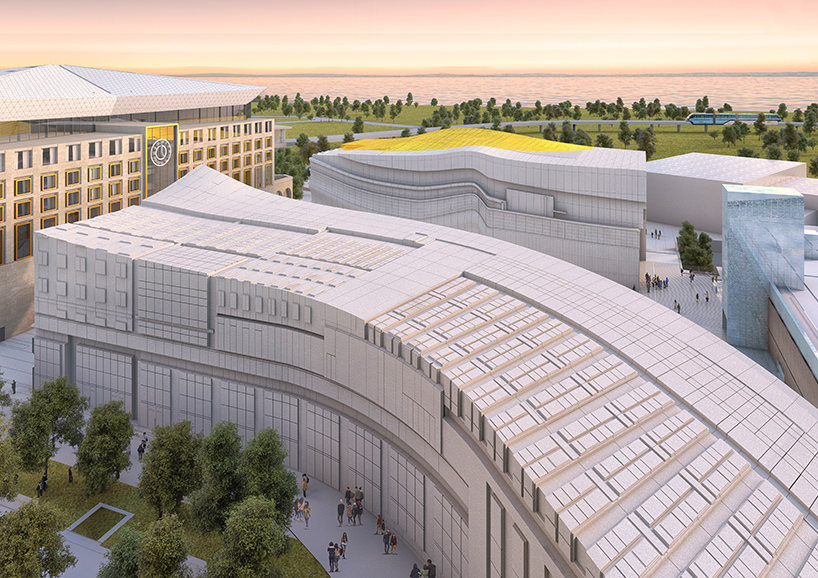 the design team sought to mirror the buildings’ context, connecting them formally to the urban plan

the entire complex comprises four main zones: a hotel with a casino and convention facilities; a plaza, with a boutique hotel, food-court, retail space and galleries; a spa; and the entertainment square, with retail spaces and a nightclub. intended to be completed in time for the 2018 winter olympic games, the development is designed for tourists to the city and will have a direct monorail link to the nearby airport. the 33 hectare masterplan has already begun construction, with work on MVRDV’s ‘paradise city’ expected to begin in september 2016. completion is scheduled for 2018. 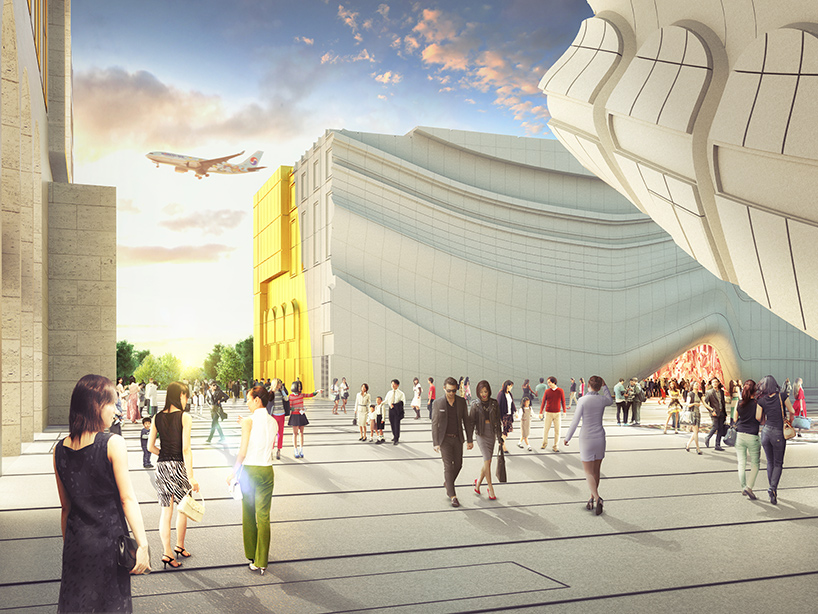 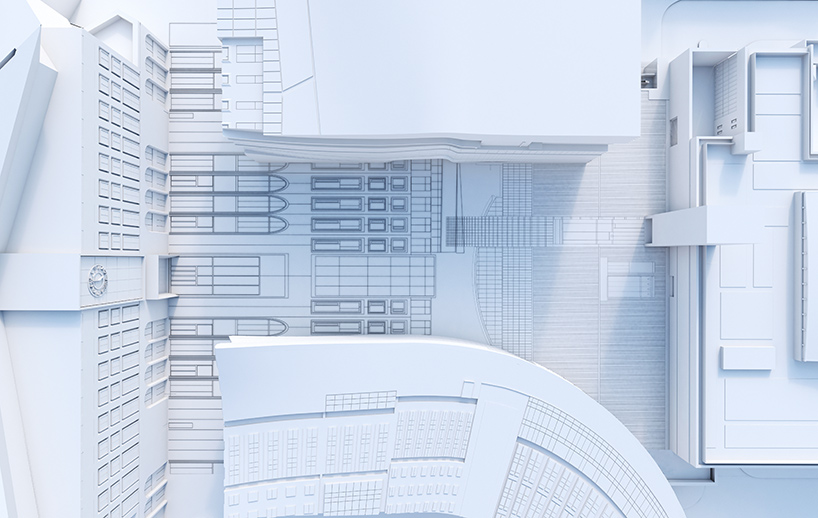 ‘paradise city’ is expected to begin construction in september 2016, with completion scheduled for 2018 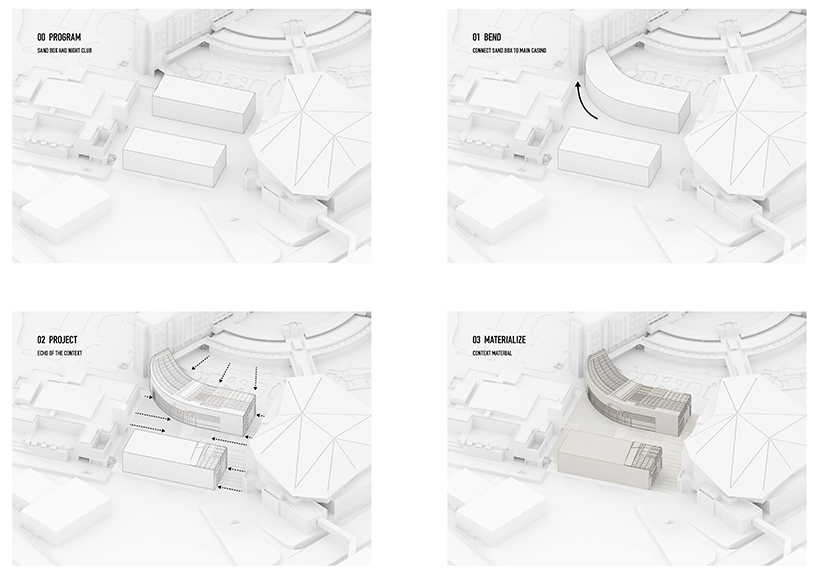 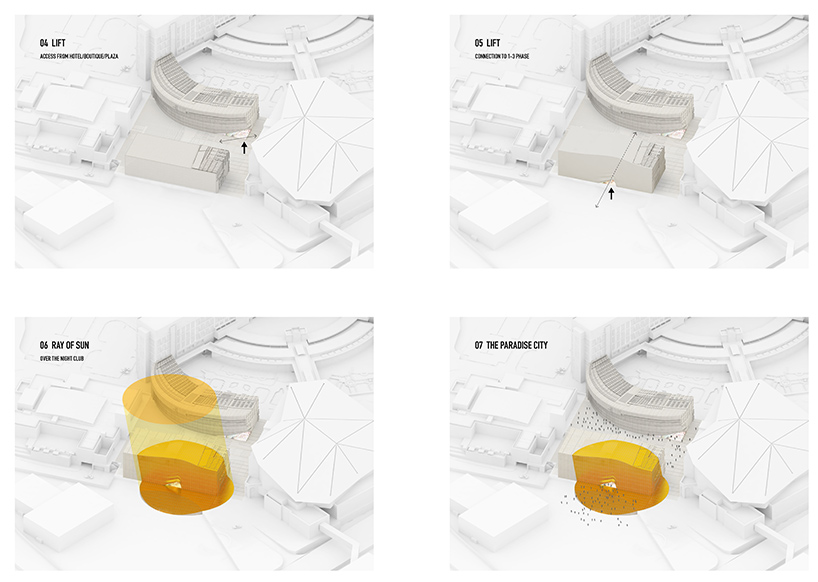 Sep 23, 2022
take a peek at the world's largest geothermal lagoon to be built in canada
construction is expected to start in march 2023.
architecture
225 shares
connections: +210