the bridge that renzo piano designed to replace the morandi bridge has been inaugurated in genoa, italy. officially titled ‘genova san giorgio’, the bridge opened almost two years after the original structure collapsed. following the tragic event in august 2018, piano — who was born near genoa — donated a replacement design, which he described as ‘simple and sober’. after almost daily construction work on site, the 1,067 meter (3,500 foot) bridge is now complete and ready to open to traffic.

on august 2, 2020, 15 months after construction began, the construction team behind the project — webuild and fincantieri — delivered the completed structure to genoa’s mayor, marco bucci. the project took just 420 days, from the laying of the first pier to its completion. it involved over 10,100 hours of work with more than 1,000 people contributing to the project’s realization. ‘this bridge is the dream of a lifetime,’ says webuild chief executive pietro salini. ‘we were able to do something beautiful. and we did it with heart — whatever profit that we might earn from this project will go to charity.’ 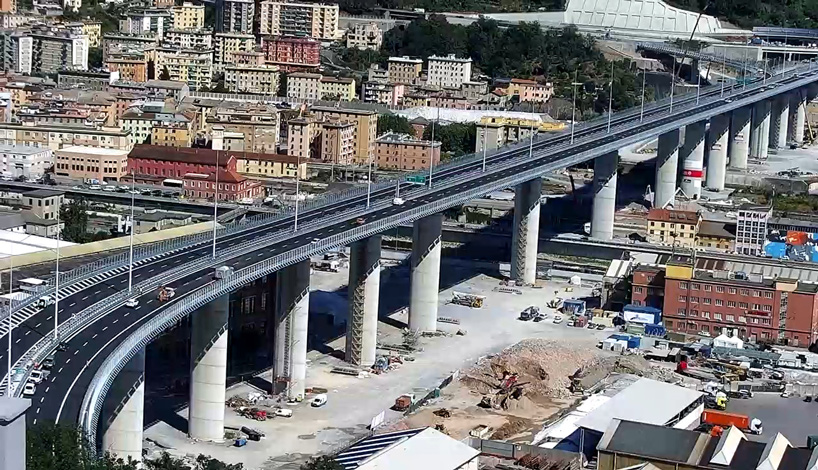 the bridge’s live status can be viewed via webcam

before the inauguration, load tests were carried out that saw 16 trucks driving along the bridge before static load tests began. this involved 56 trucks, weighing 44 tonnes (48.5 US tons) each, putting the bridge through further tests with a total combined weight of 2,500 tonnes (2,756 US tons). see designboom’s previous coverage of the project here. meanwhile, a new park that includes a pathway for bikes and pedestrians, as well as a wind tower for the production of renewable energy, has been designed for the area below the bridge.