for its first exhibition at the venice architecture biennale, new zealand presents a pavilion displaying inherently pacific design approaches, titled ‘last, loneliest, loveliest’. oceanic aspects in the country’s architecture create points of difference with international trends, which are becoming increasingly homogenous. the installation, curated by architect david mitchell, brings together a collection of objects produced by a team of nine creatives, which exemplify a lineage specific to the island nation. 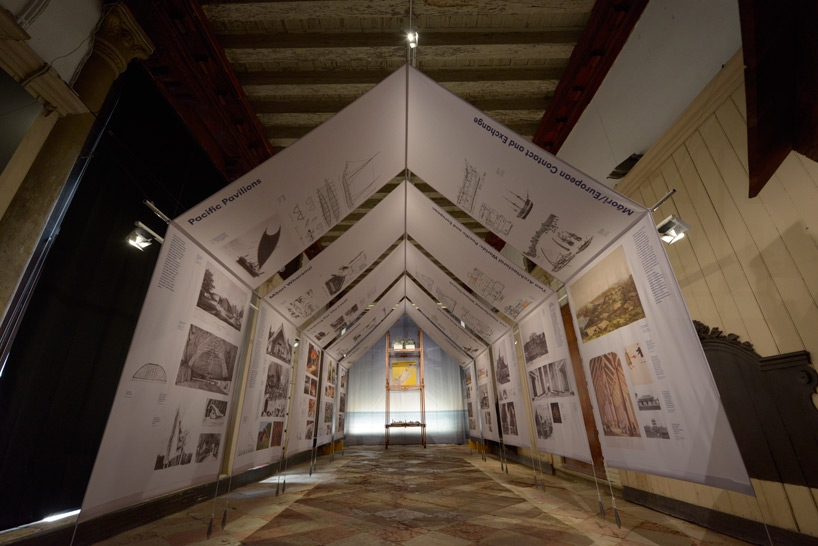 the installation includes: a globe illustration by kim meek showing pacific migration routes, a ‘tent’ with panels presenting the pacific architecture tradition, and a whatarangi (or raised māori storehouse) carved by tristan marler.  at the back of the space, a small tower exemplifies the development of light-weight, post-tensioned timber construction technologies in the wake of the christchurch earthquakes of 2010 and 2011. contained within the frame are models and illustrations by frances cooper, making the case for an alternative and more ‘pacific’ way of inhabiting the auckland waterfront. 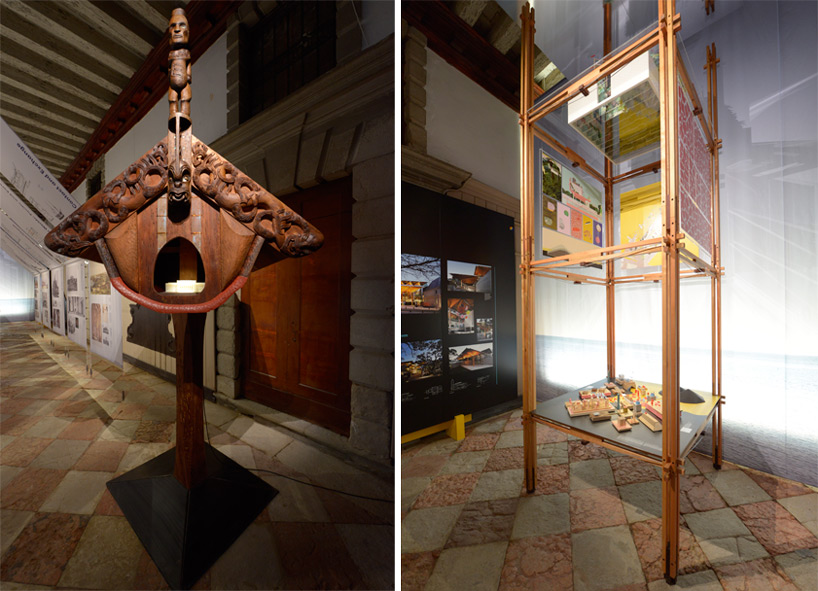 (left): the whatarangi is a small māori storehouse which is raised off the ground
(right): a small tower points to the development of light-weight, post-tensioned timber construction technologies
photos by john gollings

curator david mitchell states, ‘the pacific has a great architectural tradition, although hardly anyone honours it. that might be because it is not like european architecture, which is solid and massive and looks permanent. pacific buildings are timber structures of posts and beams and infill panels and big roofs. it’s a lightweight architecture that’s comparatively transient.’

last, loneliest, loveliest displays a century of buildings, beginning with the auckland war memorial museum (1920s) and ending with the extension to the auckland art gallery (2011) and shigeru ban’s ‘cardboard’ cathedral (1913). 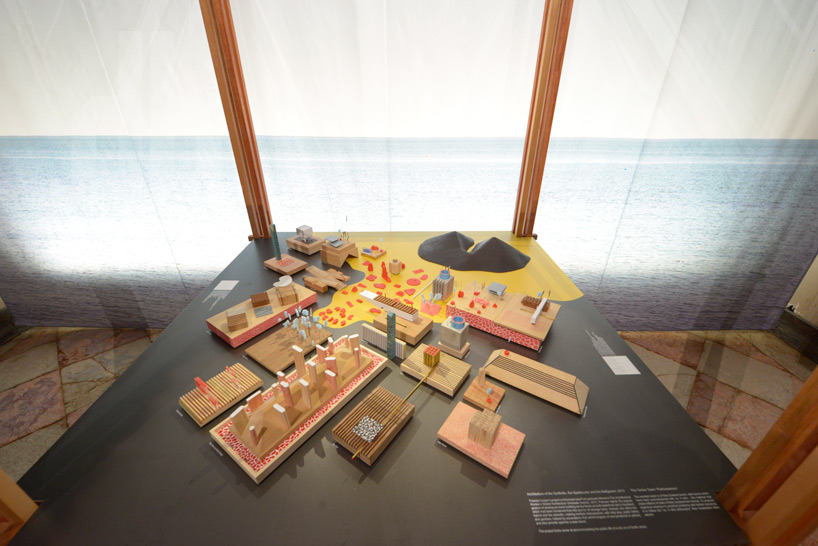 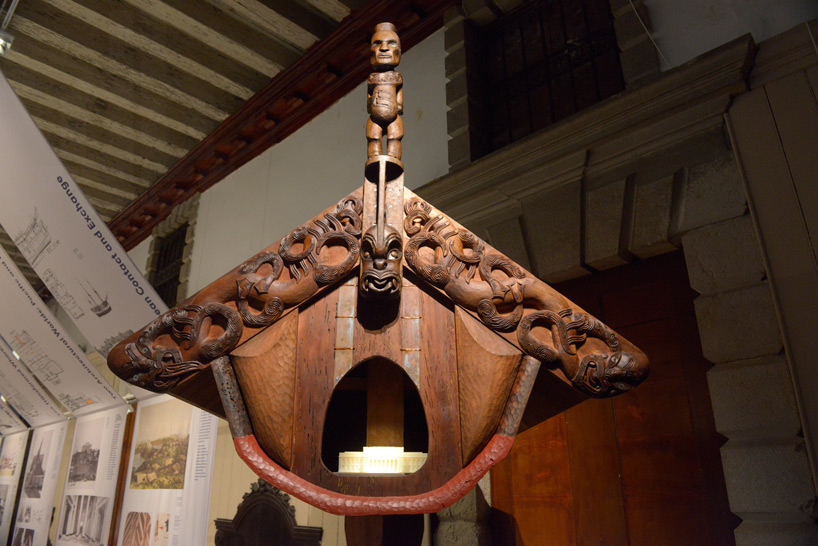 inside the whatarangi is a model of another storehouse, auckland war memorial museum (1929)
photo by john gollings 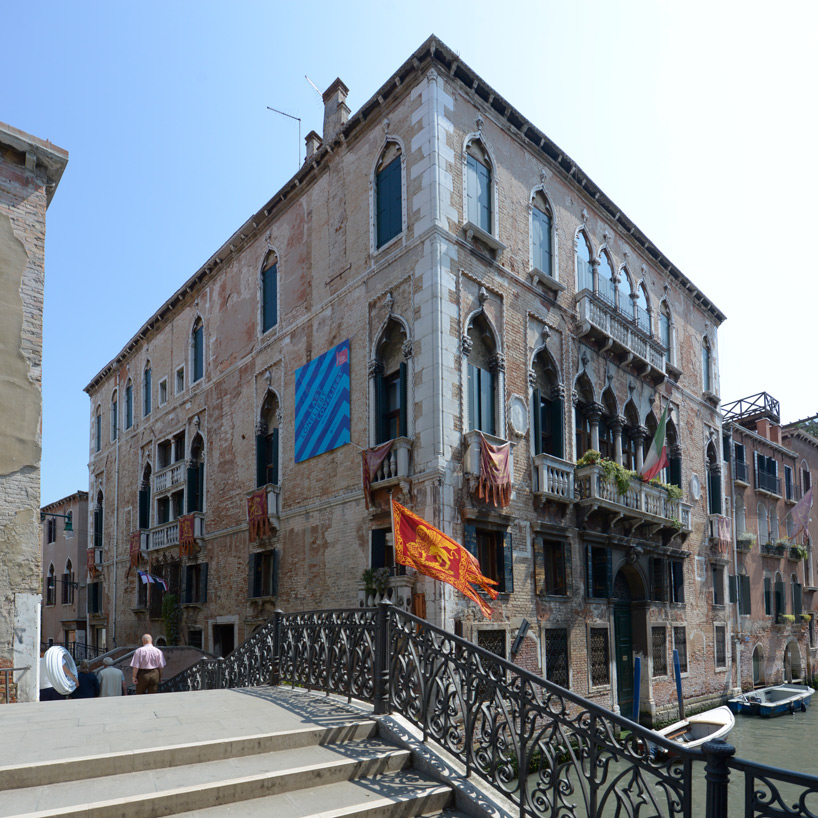 the exhibition, which was initiated by the new zealand institute of architects, is located in the palazzo pisani s. marina, calle de le erbe (off campo santa marina), cannaregio, 6104.

early exchange in the pacific: a maori bartering a crayfish with an english naval officer [ascribed to tupaia], 1769, from drawings illustrative of captain cook’s first voyage, 1768–1771. © the british library board

‘under pohutukawa’, auckland, 2011, designed by herbst architects. sheltered delicately among a grove of pohutukawa trees on a windswept beach, this beach house is another dwelling that can be read as a type of encampment.
photo: patrick reynolds

extension to auckland art gallery toi o tāmaki, 2011, designed by fjmt (francis-jones morehen thorp) in association with archimedia. the new building sits as a pacific pavilion alongside a weighty french renaissance-style ‘chateau’ (1887) designed by melbourne practice grainger & d’ebro. the gallery was judged to be ‘world building of the year’ at the 2013 world architecture festival.
photo: patrick reynolds

christchurch transitional (‘cardboard’) cathedral, 2013, shigeru ban architects in association with warren and mahoney. the building, which is constructed of cardboard tubes, timber and steel, with a polycarbon roof, is intended to be a temporary replacement for the city’s anglican cathedral, which was severely damaged in the 2011 earthquake. photo: patrick reynolds