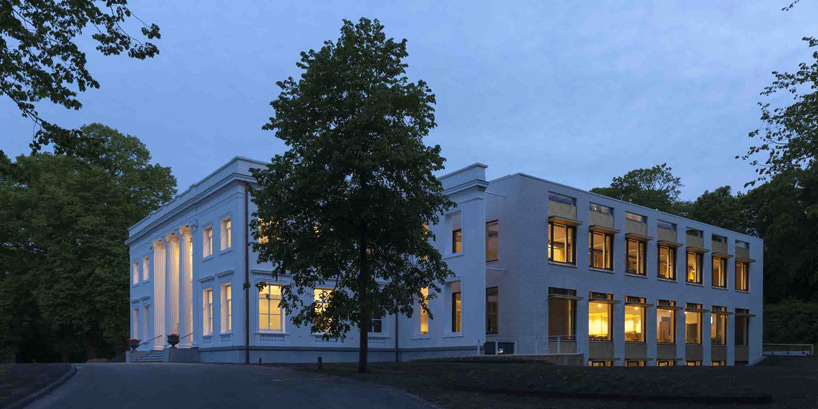 in 1820, a landscape architect named J.D. zocher built a white plastered villa on a plot of sand dunes and mire in bloemendaal, the netherlands. there the estate remained, until the city municipality bought it in 1950 with intentions to extend the property. sixteen years after the purchase, with no intentions met, the home was torn down and a contemporary building constructed — with a faithful copy of the original villa façade. the hall served faithfully until 2011, when NEXT architects and rudy uytenhaak architecture bureau were asked to revitalize the by-now nearly fifty year old structure, and incorporate sustainable technologies and modern working practices. 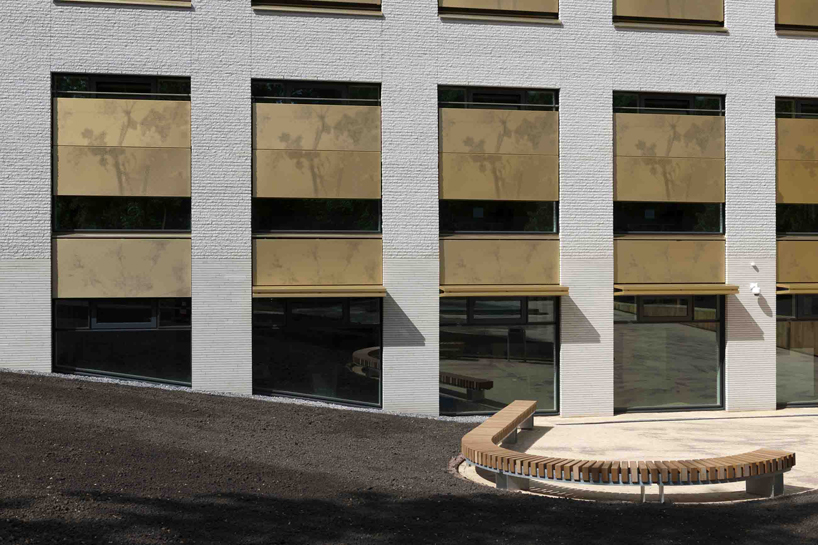 exterior with patio and seating

the process began with the intent to create a small extension to the building. however, history is bound to repeat itself, and it was later decided to scrap the former — save, once again, the iconic front façade. a modern, compact structure was then built, slightly separated physically from the retained entrance element. this modernized design allows for the history of the estate to be clearly seen. the original and recent are united in a layered fashion, representing a flux between old and new, past and present. 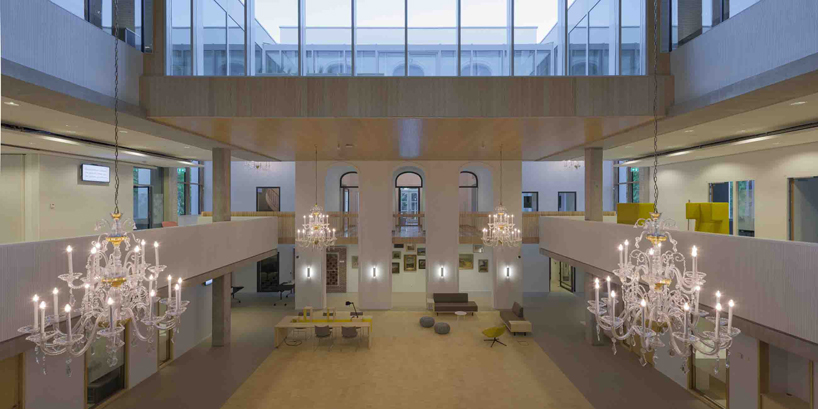 the center of the construction is formed by the citizens’ hall, a light, spacious area that is to be the home of the community. here, major events such as concerts and investitures will be debated and organized. the council chamber, situated on the ground floor, opens towards the great expanse; together they form the democratic heart of the building. 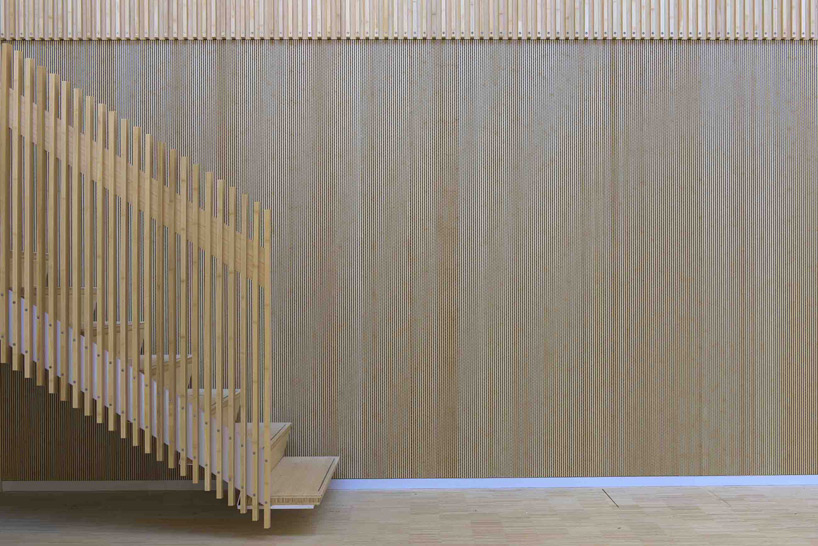 atriums and a patio bring daylight deep into the compact structure. two, ten meter high sections are located on either side of the hall, with a center section of twelve meters height. in addition, the gap caused by staggered façade draws large amounts of light via floor-to-ceiling glass. aesthetic innovations work in tandem with modern efforts into work flow and space. 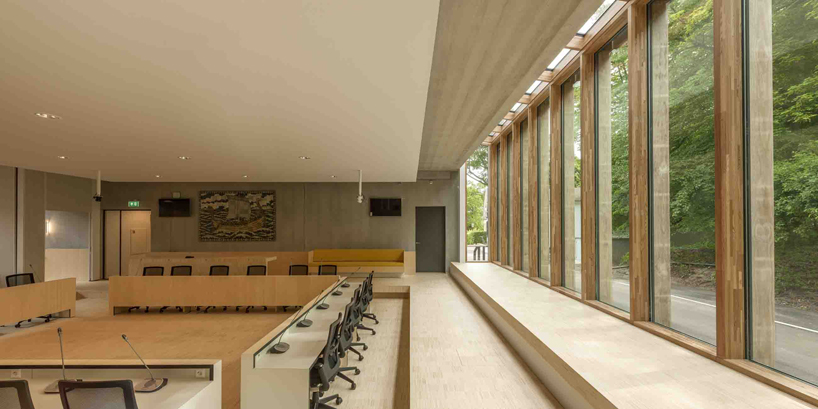 the interior design, also competed by NEXT and uytenaak, reduces space per employee down to 70%. doing so doesn’t mean people have drastically less room than before, rather the building is now organized for specific activity related work. by creating various workplaces, each with their own character, it is possible that workers find places cohesive to concentration, interaction, or others. light, natural materials like bamboo and a subtle color palette further aids the interior. architects also developed a series of designed carpets which reflect the municipality’s art collection. 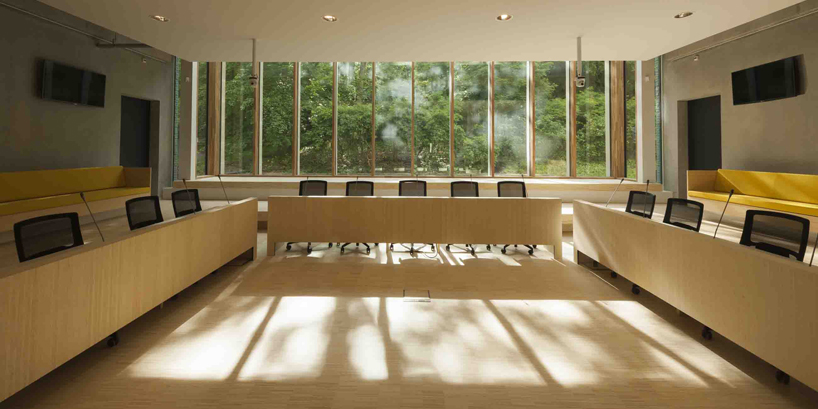 ‘bloemendaal town hall’ opened last month, and is the final realization of a unification process that began in early 2009. the central location now encompasses the civic centers of bloemendaal, overveen, aerdenhout, vogelenzang, and bennebroek. 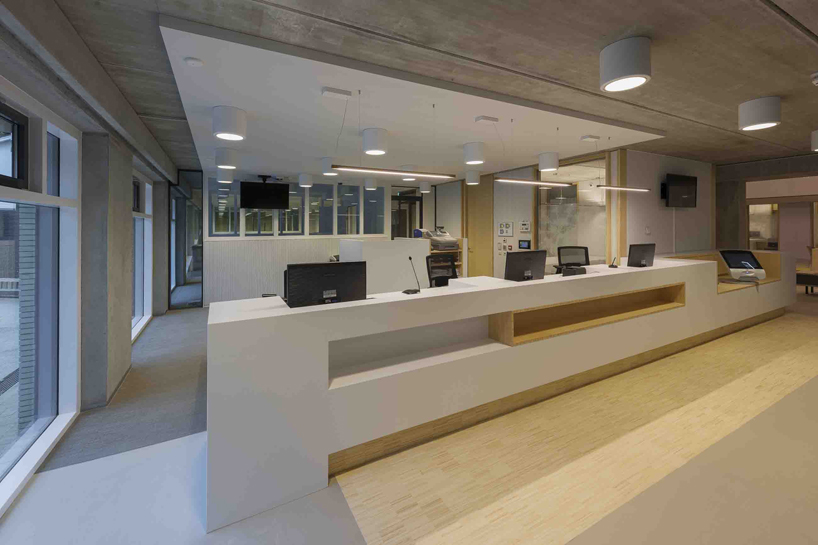 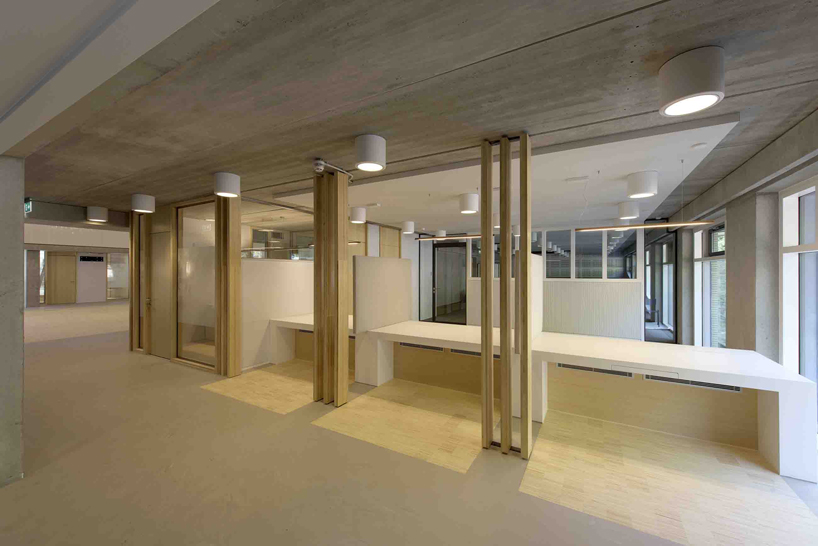 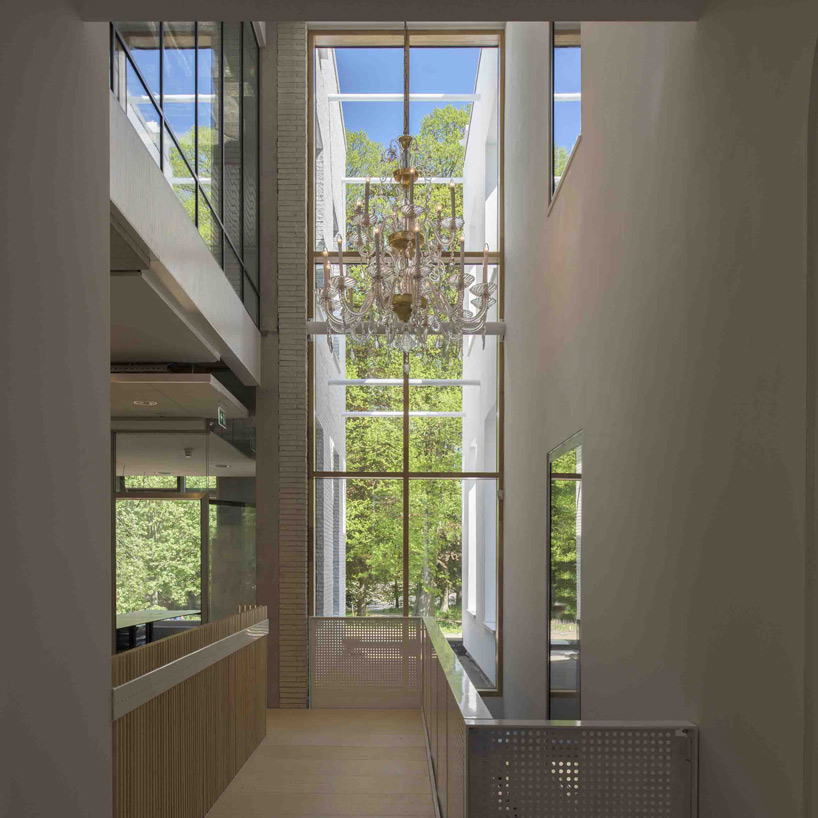 gap between original and new building 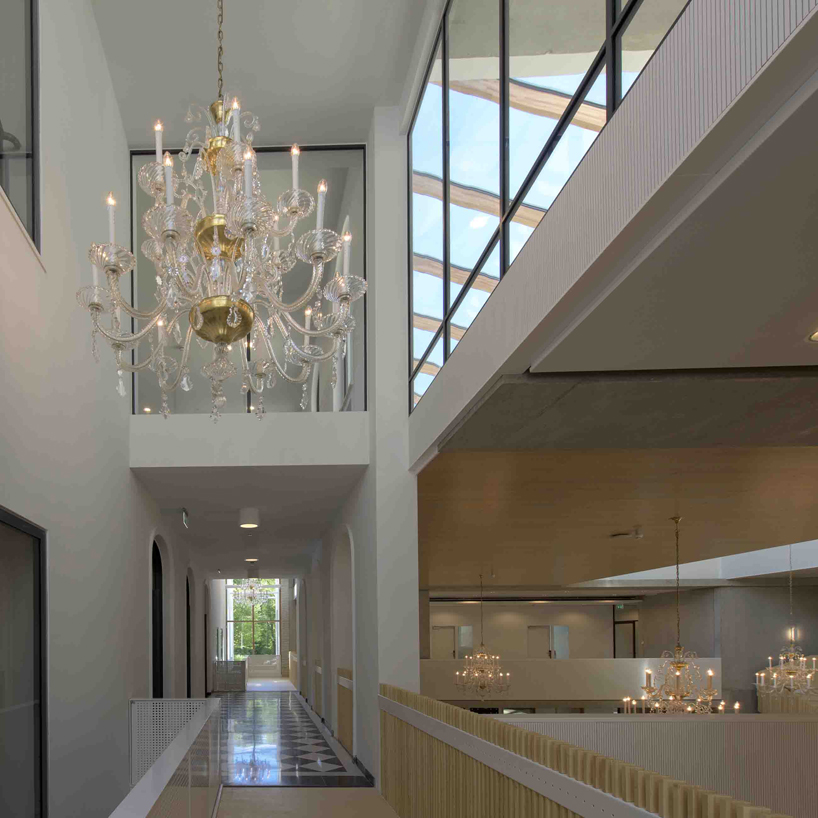 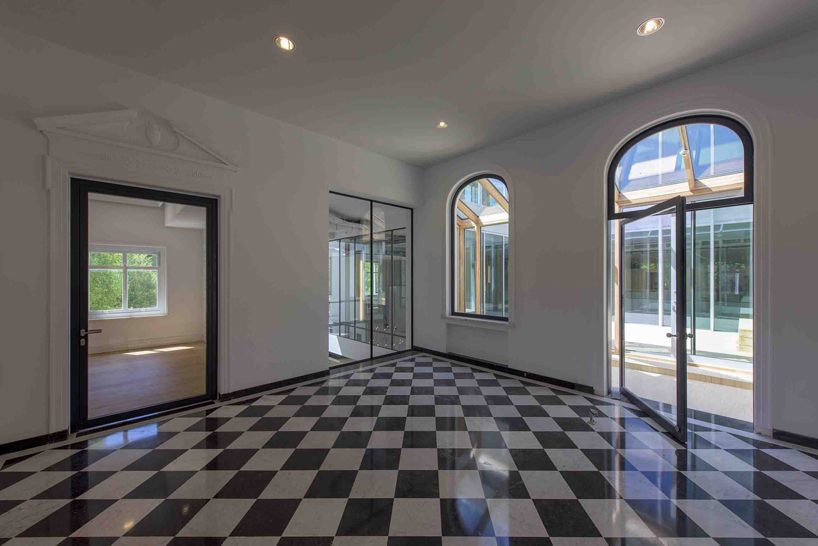 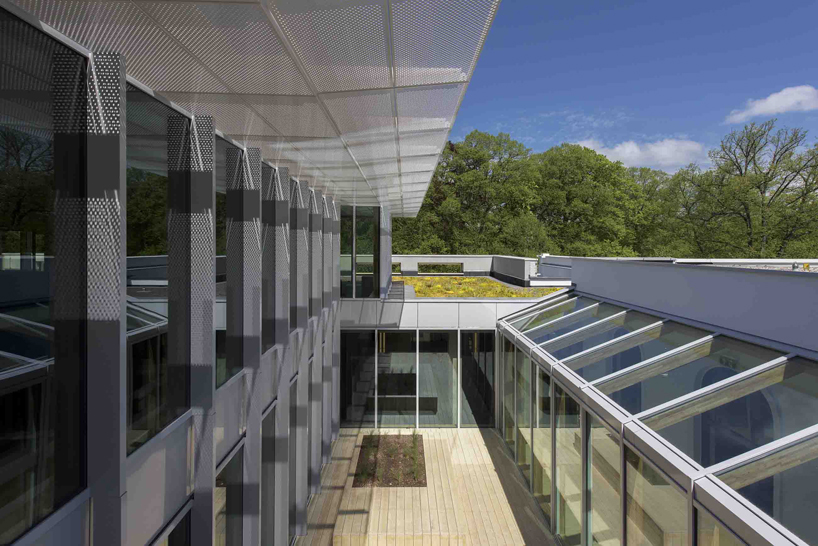 ARCHITECTURE IN THE NETHERLANDS (276) 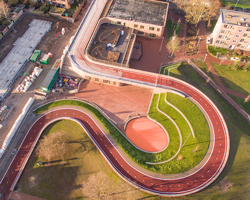 Mar 31, 2017
this bridge in utrecht allows cyclists to bike over the roof of school

Sep 14, 2021
interview: DECA discusses its landscapes and underground architecture in greece
designboom speaks with DECA architecture to learn more about its many works that are sensitively carved into the coastline of greece.
architecture
245 shares
connections: +460